John Hughes’s films are fondly remembered nowadays for their sharp, witty, high quotable dialogue. Ferris Bueller’s Day Off is no exception to this rule.

A good comedy, like a good song, should be “catchy,”; and there are many, many moments of this film that viewers just can’t help repeating once they’ve heard them. Here are twenty of our favorite Bueller quotes.

“Life moves pretty fast. If you don’t stop and look around once in a while, you could miss it.” – Ferris Bueller

Ferris Bueller may not be the most rule-abiding young man, but he can be oddly wise for a teenager. Just as he says, the hectic pace of modern life means that our days tend to rush past us, barely noticed.

Taking even a day to just be in the moment and enjoy where we are can be absolutely invaluable – especially when we’re teenagers. Those are the years when some of our fondest memories are formed, after all.

“You’re not dying. You just can’t think of anything good to do.” – Ferris Bueller

This quote pairs well with the previous one. Ferris says it to Cameron when the latter insists he’s feeling genuinely sick. He asserts to Cameron that, far from dying, he simply can’t think of anything good to do. It’s a simultaneously sobering and enlightening reminder of the fact that a dull day, empty of fun, can often feel a few steps barely up from being dead.

“Cameron has never been in love – at least, nobody’s ever been in love with him. If things don’t change for him, he’s gonna marry the first girl he lays, and she’s gonna treat him like shit, because she will have given him what he has built up in his mind as the end-all, be-all of human existence. She won’t respect him, ’cause you can’t respect somebody who kisses your ass. It just doesn’t work.” – Ferris Bueller

Through this line, Ferris reveals to us not only that his friend Cameron is unlucky in love but also that he is naïve about the matter and probably has low self-esteem. It’s a wonderful way of establishing the character and of giving the romantic subplot of the film a bit of extra weight.

“Pardon my French, but Cameron is so tight that if you stuck a lump of coal up his ass, in two weeks you’d have a diamond.” – Ferris Bueller

Lines like this are genius in how, within a simple sentence, they sum up the essence of two characters at once. In this instance, we’re simultaneously taught about Cameron’s uptight nature and Ferris’s strangely eloquent vulgarity.

“The place is like a museum. It’s very beautiful and very cold, and you’re not allowed to touch anything.” – Ferris Bueller

In this line, Ferris is describing Cameron’s house. It’s a moment that helps us understand that Cameron’s rather uptight nature, and his fear of pushing boundaries and breaking the rules have likely been imparted to him by a rather cold, impersonal, rule-heavy family life.

“Pardon my French, but you are an asshole!” – Cameron

Cameron yells this to school principal Rooney while impersonating Ferris’s dad over the phone. Besides being something that every other teenager has probably wanted to yell at their principal at some point, the repetition of Ferris’s words (seen above) is a sure sign that, in spite of Cameron’s more uptight nature, he really is starting to see the merits of Ferris’s carefree attitude.

“If you’re not over here in fifteen minutes, you can find a new best friend!” – Ferris Bueller

“You’ve been saying that since the fifth grade.” – Cameron

Another little exchange that tells us a whole lot about the characters – firstly, that they’ve been friends for ages, and secondly, that Ferris has been trying to draw Cameron into his carefree attitude to life for most of that time.

This reinforces how, despite their differences in personality, their friendship is clearly an enduring one and makes it all the more powerful when Cameron does, at last, start to see the joys in Ferris’s rebellious approach to life. 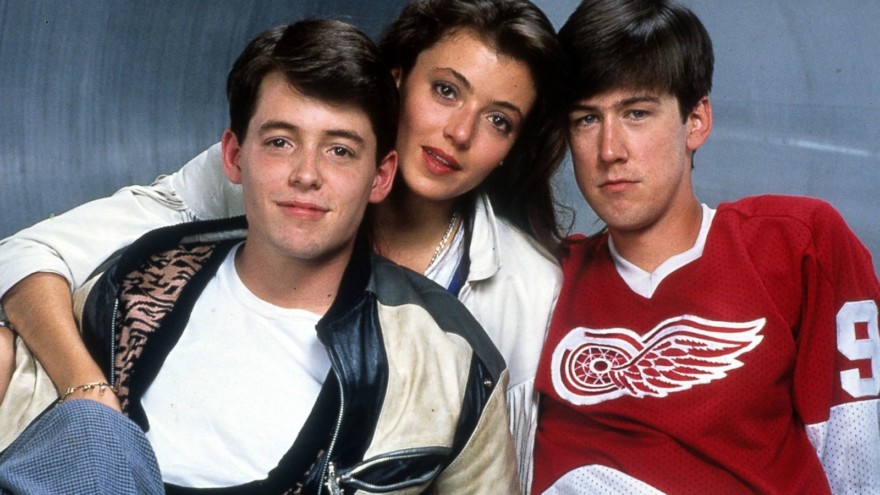 “Oh, I’m sorry. I can’t come to the door right now. I’m afraid that in my weakened condition, I could take a nasty spill down the stairs and subject myself to further school absences. You can reach my parents at their places of business. Thank you for stopping by. I appreciate your concern for my well-being. Have a nice day!” – Ferris Bueller

Ferris sets up this recording to play when his doorbell is rung. It shows both how prepared he is and how thoroughly he has thought out his truancy scheme, but it’s also a reflection of his cheeky nature.

He likely knows that someone like Principal Rooney won’t buy into this recording should he come by. Thus, the recording also serves as a way of thumbing his nose at Rooney’s likes, whose rules he is so gleefully defying.

“The 1961 Ferrari 250GT California. Less than a hundred were made. My father spent three years restoring this car. It is his love, it is his passion.” – Cameron

This line is invaluable in the film, as it sets up how rare and expensive the car is, and how precious it is to Cameron’s father…which. Of course, only gives the scene where said car plummets into a ravine that extra horrifying edge.

“Ferris Bueller, you are my hero!” – Cameron

Sure, Cameron ostensibly says this line sarcastically after Ferris “saves” him from pretending to drown in the pool. However, one gets the sense that there’s actually more than a little sincerity behind this line. After all, Ferris has spent much of the film teaching Cameron – and all of us, by extension – the joys of being able to truly have fun and seize the moment.

Moments like this reinforce, firstly, Ferris’s almost hedonistic dedication to fun and good times, and, secondly, the fact that he’s going to ensure that his friends share those good times with him today, whether they like it or not.

“Hey, Cameron. You realize if we played by the rules right now we’d be in gym?” – Ferris Bueller

A nifty summary of Ferris’s philosophy. He’s not a fan of the rules, and he’s trying to convey the joys of rule-breaking to his far more strait-laced friend Cameron.

And he’s doing so in a way that would probably work on any teenager: by showing them first-hand what fun rule-breaking can be and directly contrasting it with how dull things would be if they were following the rules right now.

“Not that I condone fascism, or any -ism for that matter. -Ism’s in my opinion are not good. A person should not believe in an -ism, he should believe in himself. I quote John Lennon, ‘I don’t believe in Beatles, I just believe in me.’ Good point there. After all, he was the walrus. I could be the walrus. I’d still have to bum rides off people.” – Ferris Bueller

In this little diatribe, Ferris outlines how, in his carefree lifestyle, he doesn’t have time to concern himself with such woeful, confusing things as politics.

His concern is himself, his friends, and having a good time. This resonates not only with the carefree teens in the audience but with world-weary adults who yearn for the days when they could afford to be so unconcerned about such things.

Early in the film, Grace’s line serves to inform us of how tremendously popular Ferris Bueller is among every social group in the school. This is especially notable in an 80s teen comedy, wherein different high school cliques were generally portrayed as being fiercely at odds with each other.

The notion of Ferris Bueller transcending categorisation among any of these cliques and being popular with all of them would likely have sounded pretty revolutionary to teens watching in the 80s. 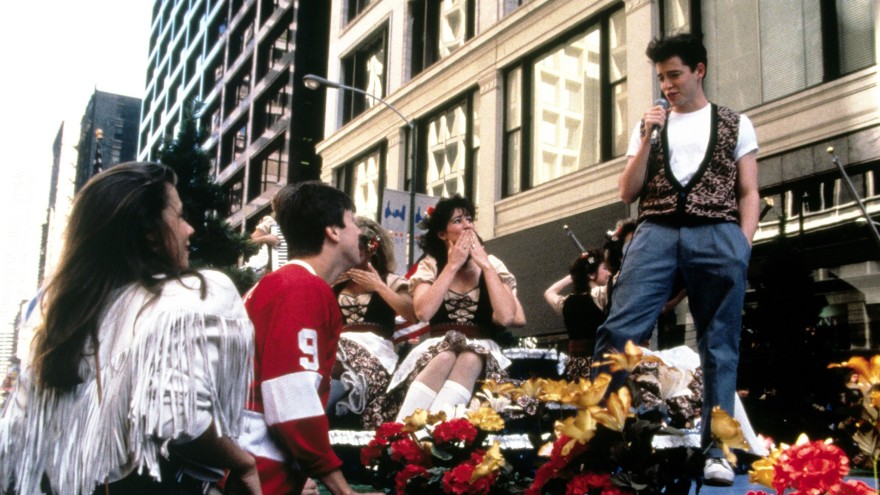 “The key to faking out the parents is the clammy hands. It’s a good non-specific symptom; I’m a big believer in it. A lot of people will tell you that a good phony fever is a deadlock, but, uh… you get a nervous mother, you could wind up in a doctor’s office. That’s worse than school. You fake a stomach cramp, and when you’re bent over, moaning and wailing, you lick your palms. It’s a little childish and stupid, but then, so is high school.” – Ferris Bueller

Lines like this were what made it clear how much John Hughes was aware of the film’s largely teenage audience. He knew, no doubt, that many of them would be delighted to hear a piece of dialogue like this and would be eagerly scrawling down mental notes for the next time they planned to feign illness on a school day.

“I do have a test today, that wasn’t bullshit. It’s on European socialism. I mean, really, what’s the point? I’m not European. I don’t plan on being European. So who gives a crap if they’re socialists? They could be fascist anarchists, it still doesn’t change the fact that I don’t own a car.” – Ferris Bueller

This is another line very clearly written directly for the teenagers in the audience. Sure, adults can see the flaw in Ferris’ reasoning (the value in learning political history goes beyond how applicable it is to your immediate situation), but the line isn’t for them.

For teens, Ferris is speaking directly to their own frustrations at having to expend so much effort learning things that, from their perspective, seem completely alien and inapplicable to their lives. It’s a feeling that, if we’re honest, we all endured at school at some point.

“How can I possibly be expected to handle school on a day like this?” – Ferris Bueller

Ferris utters this line after opening the blinds on a beautiful spring morning. It’s a moment that speaks to the experiences of adults and teenagers alike.

Even for those of us who happen to enjoy work or school, we’ve all had moments where we’ve looked out the window and groaned at the fact that we can’t just ditch our responsibilities, run out the door, and just spend some time in the sun.

Moments like this really help us connect to Ferris, as he’s becoming to us, as he is to Cameron, the rebel we wish we could be.

“I did not achieve this position in life by having some snot-nosed punk leave my cheese out in the wind.” – Ed Rooney

Lines like this reinforce how unlikable Principal Rooney is. Despite ostensibly being a champion of education, he has a tendency to utter lines like this, which are clearly meant to be profound but are actually meaningless and clumsy.

It reinforces how, for all his proclamations, he really cares a lot more about his own ego than education – as he’ll prove when he abandons his post at the school and commits several felonies in a petty effort to catch Ferris playing truant.

Taking roll call early in the film, Ferris’s economics teacher starts calling out his name in a dreary, almost robotic monotone, continuing long after he gets no response. It’s a genius piece of screenwriting, as it directly contrasts the dreary, monotonous, almost mindless routine of school life with the fun, vibrant day that Ferris and his friends are having.

Ferris famously says this line directly to the audience at the end of the film. It’s an excellent piece of medium awareness and fourth-wall-breaking (which were pretty rare in mainstream films at the time) since it plays at the end of the credits.

Post-credits scenes were much less common back then than they are nowadays, so this scene serves as a cheeky callout to those cinemagoers who, for one reason or another, hung around the theatre after everyone else has filed out, sitting through the credits to the end.