Sure, Ridley Scott’s Gladiator may have taken some liberties with historical accuracy, but it revitalized popular interest in ancient Rome as a setting; and more importantly, it excellently conveyed a powerful tale of a nobleman overcoming seemingly insurmountable odds. And a major part of the film’s timeless excellence is, of course, its writing.

The movie is rich in the kind of dialogue that’s just right for a historical cinematic epic – melodramatic, and perhaps even a bit overwrought, but so very stirring in the way it is conveyed and delivered.

Now, with a belated sequel to the film in the works, we’ve decided to look back on this classic and reflect on twenty of our favorite quotes from its highly memorable script.

“Are you not entertained?!” – Maximus

Even people who haven’t yet seen the film have probably heard this defiant quote from Maximus, bellowed to the bloodthirsty spectators as he fights in the arena. Not only is it a scathing indictment of the Roman elite who forced prisoners into bloodsports for their own amusement, but it also feels at least a little applicable even today.

Sure, we may not make people fight to the death in arenas anymore; but the phenomenon of being more concerned about our own entertainment than the well-being of our fellow man is, sadly, something that will probably never completely disappear from human society.

“We who are about to die salute you.” – Gladiators

It’s a simple phrase, but one which demonstrates how the gladiators were forced to bow before Rome’s Emperor and accept their impending death – an expectation which Maximus boldly defies.

“Rome’s the mob. Conjure magic for them, and they’ll be distracted. Take away their freedom, and still, they’ll roar. The beating heart of Rome is not the marble of the senate; it’s the sand of the coliseum. He’ll bring them death, and they will love him for it.” – Gracchus 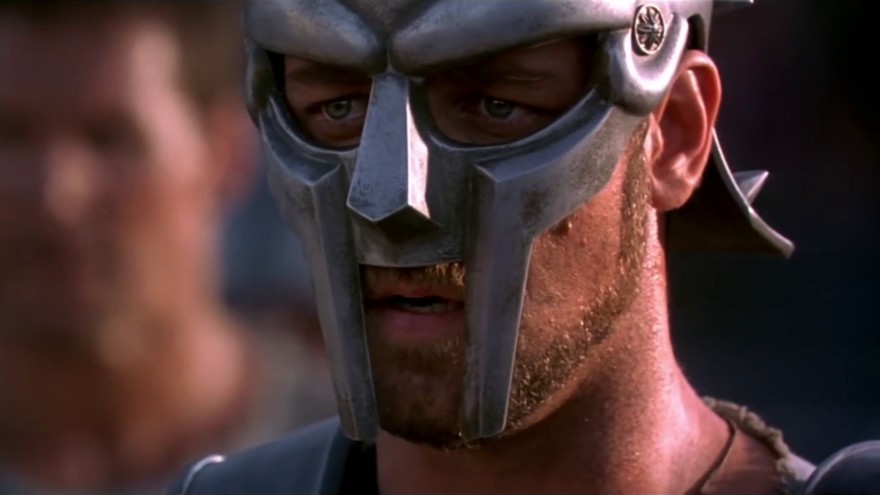 Another scathing piece of commentary on the role of the arena (and by extension, entertainment itself), this line, uttered by Senator Gracchus, calls to mind Juvenal’s classic phrase “bread and circuses.”

It evokes how the major role of gladiatorial games in ancient Rome was to keep the public placated and less likely to become discontent with the actions of its leaders… and nods to how, even today, modern entertainment continues to play a similar role.

“And when you die – and die you shall – your transition shall be to the sound of applause.” – Proximo

These are some of the first words that gladiator trainer Proximoutters to his newly purchased batch of slaves.

It’s a cold, blunt acknowledgment that, from this point forth, as far as Rome is concerned, the only value in the lives of these slaves comes from the entertainment that they can provide in the arena – something which Proximo, as a former gladiator himself, is all too familiar with.

“Thrust this into another man’s flesh, and they will applaud and love you for that. You – you may begin to love them for that.” – Proximo

Proximo utters this line a few scenes after the previous one, offering a hint of further insight into what he learned in his time as a gladiator.

The line hints at how even the most reluctant gladiator, once they are forced to fight, may eventually develop an ironic love for the thrill of victory, and for the spectators who have forced them to fight to survive.

It’s a reality that the new slaves are faced with moments later when they step out into the arena to face off against a set of ruthless and determined gladiators.

A line that arguably serves as a culmination of all the hints that Proximo has dropped about his past throughout the film.

It draws on the fact that Proximo understands the harsh reality of gladiatorial life just as much as his gladiators, and that his constant pushing for his slaves to keep the crowd entertained has, perhaps, helped them live as long as they have.

“I am required to kill, so I kill. That is enough.” – Maximus

This line, which comes from the same scene as the previous one, reflects Maximus’s reluctance to comply with the violent culture of the gladiatorial games.

He may be forced to kill his opponents to survive, but he does not wish to cater to the crowd’s bloodlust by giving them the sadistic, drawn-out show they are clamoring for.

“Some are good for fighting, others for dying. You need both, I think.” – Slave trader

This line, which is uttered by a slave trader to Proximo as he hawks his slave to him as potential new gladiators, serves as further commentary on the grim nature of the gladiatorial games – strong fighters are important, to be sure, but the crowd has come to see death, and as such, “fodder” slaves expected to die quickly are just as important.

“My name is Maximus Decimus Meridius, commander of the Armies of the North, General of the Felix Legions, loyal servant to the true Emperor, Marcus Aurelius. Father to a murdered son, husband to a murdered wife. And I will have my vengeance, in this life or the next.” – Maximus

Maximus utters this line to Commodus after he reveals his identity to Commodus, who had come to congratulate the newly established gladiator on his many victories.

It’s a line that shows how, despite the incredible hardships he has faced in the arena, Maximus’s drive to avenge his slain family has not been extinguished – and given how the audience has come to hate Commodus over the course of the film, it’s an incredibly cathartic moment. 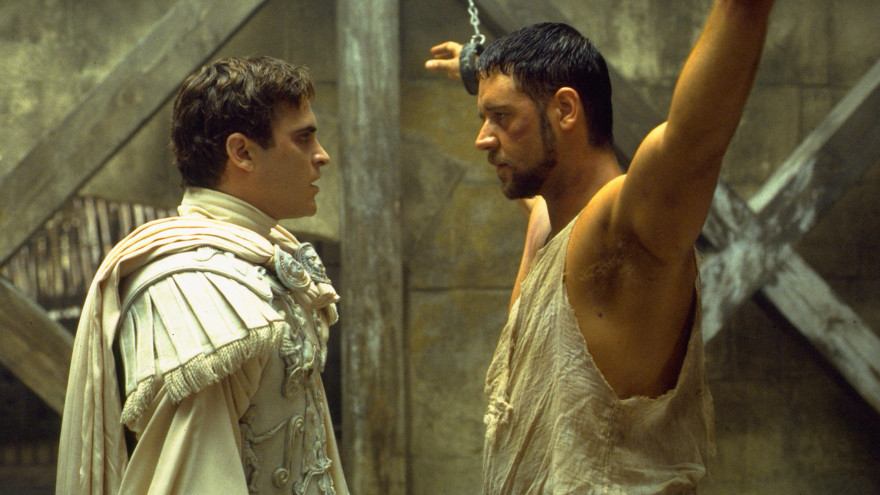 “What we do in life echoes in eternity.” – Maximus

This line, which Maximus utters to his men before they charge into a bloody clash with the barbarians of Germania, is not only extremely stirring in how it conveys the greater cause for which the men are fighting.

It also works as meta-commentary on how Rome’s often ruthless efforts at expansion did indeed echo throughout human history. Why else would we be watching a feature film about them all these centuries later?

These three simple words, which serve as a creed between Maximus and his soldiers at the beginning of the movie, resonate throughout the movie as a major theme.

Maximus himself is a man who retains both his strength and his honor even when all hope seems lost, while his enemy, Commodus, is a man without a shred of honor, whose only “strength” comes in seizing power through deception and trampling on those beneath him.

“Ancestors, I honor you, and will try to live with the dignity you have taught me.” – Maximus

In a similar vein to the previous quote, this line, uttered by Maximus in a prayer to his ancestors, serves to recur throughout the film.

We see Maximus’s great resolve as, even after he has seemingly lost everything and faces the possibility of imminent violent death in the arena, he fights to retain the dignity and composure of his ancestors.

When Emperor Marcus Aurelius asks Maximus how he wishes to be rewarded for his efforts in the war in Germania, Maximus simply asks that he be allowed to return home.

This helps establish to the viewer that, for all Maximus’s prowess on the battlefield, he is not a man who revels in bloodshed, and simply wishes to enjoy a quiet life with his family.

“Maximus, we must save Rome from the politicians, my friend.” – Commodus

This line, uttered by the Emperor’s ambitious young son Commodus to Maximus in an effort to win the celebrated soldier’s favour, is a delicious example of dramatic irony; for as the viewer will soon learn, it’s Commodus’s own ruthless political ambitions that pose the greatest threat to Rome and its people.

“The general who became a slave. The slave who became a gladiator. The gladiator who defied an emperor. Striking story! But now, the people want to know how the story ends. Only a famous death will do. And what could be more glorious than to challenge the Emperor himself in the great arena?” – Commodus

This line from Commodus serves to neatly summarise the essence of the story that the movie tells. Like the last quote, however, it’s full of dramatic irony, as it’s clear that Commodus utters this line with the notion that the story shall end with Maximus dead, and himself the story’s ultimate victor.

This, of course, is not the ending that any spectator is hoping for at this point; and as many can predict, it is not how Maximus’s tale will end.

“I brought the sword. Nothing more.” – Marcus Aurelius

This line, uttered by Emperor Marcus Aurelius to Maximus, shows how the elderly Emperor is clearly beginning to reflect not only on his own life but on the nature of Rome as a whole.

He has begun to contemplate how, for all the celebration of the glory of Rome, his role as a leader has largely consisted of retaining this concept of “Rome” by way of violent, ruthless conquest.

It offers great insight into why he wishes to see Rome once again become a republic – and how Commodus’s ruthless lust for power will only perpetuate this culture of violence. 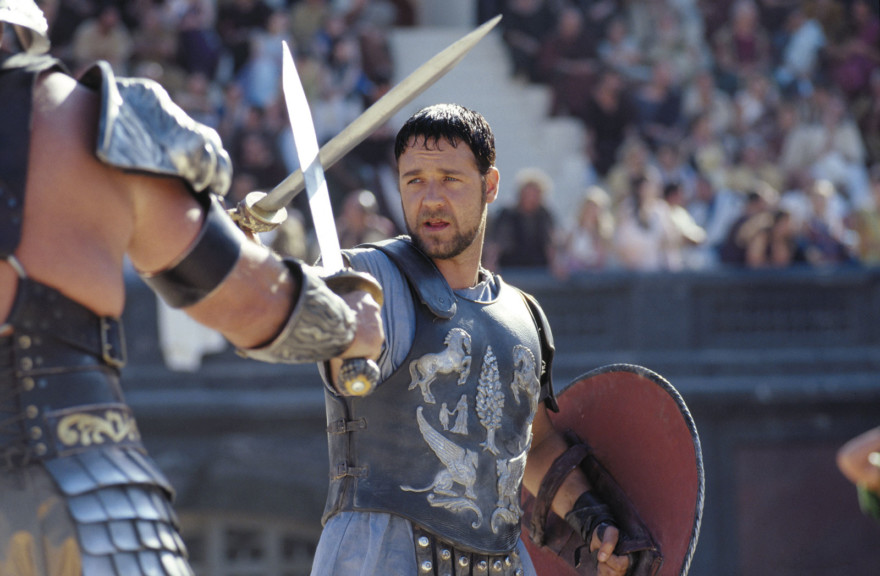 “Five thousand of my men are out there in the freezing mud. Three thousand of them are bloodied and cleaved. Two thousand will never leave this place. I will not believe they fought and died for nothing.” – Maximus

This line, uttered in the same scene as the previous one, shows how Maximus’s position as a military leader has necessitated his belief in the idea that the growth and expansion of Rome is a worthy cause, as it has been the driving force behind his military career.

This scene, like so many others, is rich in irony, as it will not be long before Rome’s new Emperor betrays Maximus and forces him to the absolute bottom of Rome’s social hierarchy.

This line is uttered by Maximus in response to Marcus Aurelius’ question as to how long it has been since he was home.

It’s a simple answer, but it reinforces Maximus’s deep love for his wife and son by revealing that he has counted every single day since he left…and intensifies the tragedy when he discovers that Commodus has had them killed.

This line is uttered early on by Quintus, one of Maximus’s comrades-in-arms, as the last of the Germanic barbarians prepare to face off against the forces of Rome.

Not only is this some heavy foreshadowing (after Commodus kills his father and assumes the position of Emperor, Quintus quickly decides there is no point resisting and pledges his loyalty to Commodus), but it’s a nifty little bonus for those familiar with Roman history, who might know that, despite Quintus’s cockiness, Rome, in fact, never did manage to completely conquer Germania.

For all the rough grittiness of the film, this line – which Maximus utters early in the film, as he sees the horseman sent to negotiate with the Germanic tribes riding back with his head cleaved from his shoulders – shows that it’s not above a little sprinkling of black comedy.