Top Gun may be a film about Navy pilots, but it’s just as well remembered for its sharp dialogue as for its enthralling aerial combat. Below, we’ve gathered 20 of our favorite quotes from what is still considered one of the best films about military pilots ever made.

“On March 3, 1969, the United States Navy established an elite school for the top one percent of its pilots. Its purpose was to teach the lost art of aerial combat and to ensure that the handful of men who graduated were the best fighter pilots in the world. They succeeded. Today, the Navy calls it Fighter Weapons School. The flyers call it: TOP GUN.” – Title card

This title card introduces viewers to the world of elite pilots in which the film takes place, explaining to the uninitiated just what “Top Gun” is. It makes it clear to us that we’re going to be spending the movie with some folks who are seriously talented in the cockpit.

The simple rhyme “need for speed” has entered into the public lexicon by now. Brief and catchy, it’s an extremely simple way of summing up the exhilarating thrill that one gets from high speeds – something fighter pilots, more than anyone else, are likely familiar with.

The life of a military pilot is as high-stakes as it gets, and there’s no room at all for error. Even playful lines like this underline just how critical it is that the protagonists hone their skills.

“Goose, whose butt did you kiss to get in here anyway?” – Slider

Lines like this one are extremely significant in the film’s character development. They underline how Maverick’s good buddy Goose, like Maverick himself, isn’t the sort of individual that you’d expect to be attending a school for top pilots.

“I think I’ll go embarrass myself with Goose.” – Maverick

Speaking of Maverick and Goose, lines like this one highlight how, while they’re both seriously talented pilots, they’re also a pair of unruly goofballs. And Maverick, well, he knows it. 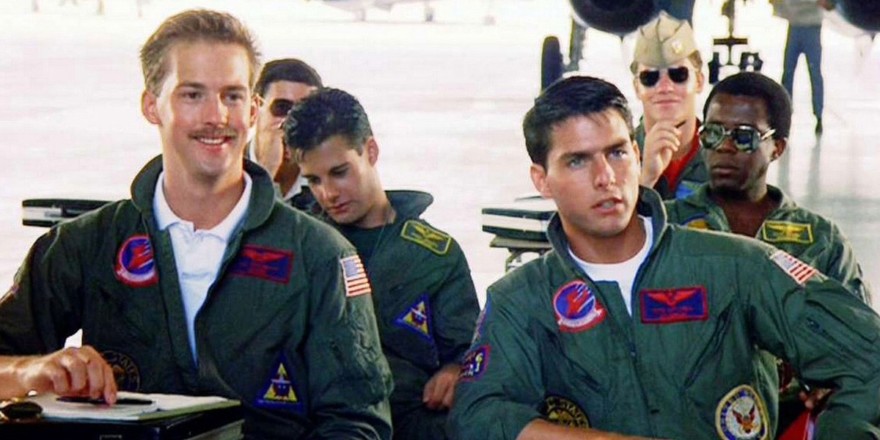 “The Defense Department regrets to inform you that your sons are dead because they were stupid.” – Goose

Spoken by Goose after a poor performance by the protagonists during a training exercise, this quote, likewise, underlines that sharpening one’s skills is a matter of life and death for pilots.

This one line pretty much sums up all the pilots’ reactions to the revelation that Viper – a Top Gun instructor and Vietnam War veteran – will be one of their opponents in a coming training exercise. It’s the moment where it really hits home for them just how rough this is going to be.

There’s something incredibly quaint about this quirky expression of surprise, which is why it’s weird to hear it coming from a military man.

Another one from Goose. Nothing too significant; it just very nicely evokes those priceless moments when your close buddy is extremely incoherent in the words he uses, but you somehow know exactly what he’s talking about nonetheless.

This line is uttered by Carole, Goose’s wife. It’s mostly notable for the fact that she’s played by Meg Ryan, who, at the time, was only just establishing herself on the big screen. In the coming years, she’d become one of the most widely-recognized actresses of the late 80s and early 90s, chiefly for her roles in romantic comedies.

Goose utters this line in response to Maverick deciding to deal with a Russian MIG harassing their wingman by flying upside down above him. And giving him the bird while doing so. Both the Russian and Goose are visibly freaked out by this little stunt.

It’s one of many moments that establish that Maverick is a character who clearly lives up to his name. He’s something of a big kid, and he’s not afraid to get unruly, even in the cockpit.

“Son, your ego is writing cheques that your body can’t cash.” – Stinger

This is part of an exchange in which Maverick’s commanding officer, Stinger, criticizes him for his reckless behavior while flying. It’s a moment that underlines Maverick as the hot-headed young newcomer to the piloting business and demonstrates how, when it comes to military piloting, his driving force can’t be his youthful ego.

“You’re a hell of an instinctive pilot. Maybe too good.” – Stinger

In amidst giving him a tongue-lashing for his ego, though, Stinger is also able to acknowledge that Maverick’s unruly nature could be something of an asset too. After all, he’s clearly able to act on instinct, without thinking too much. In a particularly intense air-battle, that could be a life-saving trait.

“I see some real genius in your flying, Maverick, but I can’t say that in there.” – Charlie

Likewise, this line has Charlie, Maverick’s love interest, acknowledging that he is, indeed, an intensely talented pilot, even if it’s hard to tell under all that unruliness. She also notes, however, that she can’t be too open about acknowledging his brilliance in the cockpit. After all, an instructor can’t be seen to be endorsing such a rowdy nature.

“You’re everyone’s problem. That’s because every time you go up in the air, you’re unsafe. I don’t like you because you’re dangerous.” – Iceman

This line, likewise, serves to underline the dangers of Mavericks reckless approach to flying. It’s an approach that endangers not only him, but his comrades too. In a business like Navy piloting, he needs to reel in his unruliness.

And this, of course, was Maverick’s quick response to the above quote. It’s a line that makes it clear how stubborn the character is, and how his hot-headedness is something that’s going to define him throughout the film.

“Maverick, it’s not your flying, it’s your attitude.” – Iceman

Another highly effective summary of Maverick’s character. Sure, he’s talented – nobody, not even Iceman, is willing to deny that completely – but his lone-wolf, reckless nature just doesn’t gel well with the fact that he has comrades to cooperate with. An aerial unit needs to operate as, well, a unit after all.

“And if you screw up just this much, you’ll be flying a cargo plane full of rubber dog shit out of Hong Kong!” – Stinger

This line is an important moment since it likewise underlines how Maverick’s unruliness could have consequences. And not just life or death ones, either – the thrilling life of a fighter pilot is hardly the only position available.

If Maverick doesn’t reign himself in, Stinger makes clear, he could end up with one of the many more mundane positions that the US air forces have on offer, and the thrills Maverick clearly craves will be at an end.

“I will fire when I am goddamn good and ready! You got that?!” – Maverick

Maverick utters this line angrily to Sundown, who is chastising him for choosing not to shoot down Jester during a training exercise.

It’s one of the moments where Maverick’s hot-headed nature reaches something of a boiling point. Conflict is inevitable in any military unit, but it’s clear at this point that Maverick and his comrades need to coordinate their approach a bit more.

“You can be my wingman anytime.” – Iceman

This line, spoken by Iceman to Maverick at the end (Maverick replies likewise), signifies how the two of them, despite their rivalry throughout the film, have now embraced their comradeship.

It’s a touching nod to how the rigors of military life can form lifelong bonds between those who undergo it together, no matter who they may be.