These mini-ITX cases not only look great but will still allow you to pack impressive performance in a compact chassis.

What to Look for in Your Mini-ITX PC Case

This is obviously the most important factor to consider when you’re shopping for a PC case. All of the cases I feature here are compatible with Mini ITX boards, but the cases you find might not be.

Being gung-ho and buying the first case you see is going to result in you buying something that doesn’t fit with your hardware, essentially wasting upwards of $100.

All PC cases will tell you what size motherboard it’s built for, whether on the box or on the webpage. Give it a read before you buy so that you can make sure you’re getting the right size for your overall setup.

Making sure that your case is compatible with your motherboard is a necessity. However, the build and customization of the case aren’t.

You could buy a bog-standard PC case and treat it like a plug-and-play. That’s not fun, though, and if you’re spending four digits on building a PC tower, you should want it to be perfect.

Therefore, make sure you actually like the build of the case that you’re buying. Have a look at it from all angles, consider any tempered glass panels that it has, whether it comes with RGB or supports a liquid cooling system.

Better yet, some cases are actually completely customizable. Sometimes you get additional options in the box, but you have even more options if you have a 3D printer at home.

At the end of the day, it’s your PC, so make sure it actually feels like yours rather than one you stole from the office.

This might come as a shock, but PC parts get super hot. All that electricity running through your components is going to heat them right up. Given that these components are made up of fragile and costly materials, you want to stop them from melting.

To do this, you have two options:

You can do both, but that’s overkill.

Most people tend to use fans to keep their PC cool, so that’s what we’re focusing on.

Hot Tip
PC cases are built in a way to fit a specific number of hardware components, including fans. So, you need to make sure there’s enough space for all the fans you need inside your case.

Last but not least, let’s talk about the ports that are on the case’s front panel. Typically, you’re going to get a handful of USB slots and a space for audio input. Given that these cases are designed with specific motherboards in mind, you shouldn’t have too much trouble here.

However, it’s still important to make sure that you have enough ports to cover everything you need to connect.

You might need a USB slot for your mouse, keyboard, headphones, and microphone, as well as a capture card and whatever other accessories you feel like hooking up. 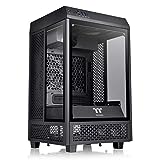 We’re starting out strong with this first entry. Thermaltake is no stranger to quality PC cases for decent enough prices, and the Tower 100 is no exception.

It’s going to run you roughly $100, but it’s one of the best-looking chassis you’re going to get for this price.

It comes with a tempered glass front panel, as well as on half of the side panels. So, if you plan on sprucing up your hardware with some RGB, this case is going to let you show all those colors off.

The Tower 100 comes with an I/O port and unique internal design that gives you access to a high-speed Type-C connecter as well as three USB 3.0s.

In terms of hardware compatibility, you’re looking at two 3.5” HDDs or four 2.5” SSDs. It also has integrated dust filters, which makes laying out your intake and exhaust fans a breeze.

The Thermaltake Tower 100 looks great, performs great, and isn’t going to break the bank, so there’s very little reason not to consider purchasing it for your Mini-ITX PC build. 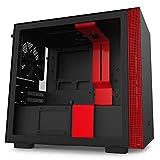 The H210 line from NZXT comes in two options. The only difference between them is that the H210i comes with integrated RGB. It also costs a decent bit more, so unless you’re crazy about the way your case looks, I’d recommend saving yourself some cash and sticking to the base version.

That base version is reasonable, making it among the cheapest Mini-ITX cases you’re going to find.

It comes with pre-installed support for a liquid cooling system, a radiator bracket, as well as a handy cable management system.

Granted, all that isn’t much use to you if you plan on using a fan setup, but for anyone looking to change it up a bit, the H210 is going to facilitate that.

Like the Tower 100, you’re got an I/O Type-C port and compatibility with USB 3.0. It also has a single tempered glass side panel which, in my opinion, looks better than the panoramic style that Thermaltake went for.

It has two expansion slots, which is fairly standard for cases this size and intake air filters.

The H210 is a pretty compact case, even by Mini-ITX standards, so if you’re working with a super-tight space, then this chassis is going to work for you.

IN WIN A1 Plus

The IN WIN A1 Plus is the first “luxury” Mini-ITX case that I’ve included on this list. It is a kick in the teeth for a lot of budget and compact builds. However, I’ve described this PC case as a luxury for a reason. It comes with features like integrated ARGB lighting, a pre-installed 650W Gold PSU that has two GPU connectors (PCI-E 6 + 2-pin), and even a wireless phone charger.

This isn’t the case for anyone looking to make their money stretch. However, if you’ve got bucks to burn, then this is one hell of a flex for any PC gaming setup.

Not only does this case come with a PSU, but you also get two Sirius loop ASL120mm fans. These fans even have RGB lighting on them. If you plan on trying to squeeze 140 fans into your Mini-ITX case, these are no good. However, the inclusion of the fans does help justify that price tag.

As well as being an inclusive and well-built case, the A1 Plus looks phenomenal and comes in three different color options.

It’s an expensive piece of kit, sure, but it’s more than worth it.

I’m keeping in the upper bracket of Mini-ITX cases with this fourth entry. Given that it’s a Razer product, you shouldn’t expect anything less.

The lack of included hardware does hurt the value for money on the Tomahawk a little bit, but you need to remember that you’re paying for that iconic Razer look.

This monster of a chassis is going to be hit or miss with you, depending on how much you value aesthetics. It’s undoubtedly one of the best-looking Mini-ITX PC cases out there, but it doesn’t really have the features to justify the cost. 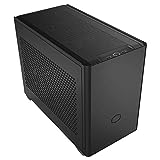 The Cooler Master NR200 is an ugly case. It looks like something you would find in a 90s sitcom. However, it’s what’s on the inside that counts. In this case, that’s a whole lot of stuff for a relatively cheap price tag.

First and foremost, the entire build is dismantled, so you’ve got full 360-degree access to every single part of the case. That’s just as well, too, because you can fit up to seven fans in this thing.

You’ve got the option of different PSU mounts, motherboard sizes outside of Mini-ITX, and even options when it comes to your GPU.

The NR200 isn’t the best-looking piece of equipment by any stretch of the imagination. However, in terms of bang for your buck, it’s arguably the best Mini-ITX case out there.

The Thermaltake Core V1 is on this list to account for a very niche type of PC build. Rather than being a traditional tower, it’s a cube chassis, meaning it’s a lot smaller than most cases you’d be used to.

That makes it harder to build with, although it can still fit all the components you need for a good Mini-ITX build. It’s also got a unique look that isn’t for everyone.

That being said, it would be remiss of me not to include at least one cube Mini-ITX PC case on this list. There are bound to be a few of you out there looking for the type of compact setup that this case can provide.

The RC-130 is another cube chassis, and it’s here for the same reason as the Core V1. While I’m more a fan of traditional towers, I want to give you as many options as possible when it comes to your Mini-ITX build.

As well as being small and compact, this case is super cheap, running a little over $50. It’s not too pretty, but it does come with everything you’d need for a setup, including liquid-cooling support.

If you’re looking for a compact and affordable case with no regard for how it looks, then you might want to consider this chassis among your options.

Last but not least, the Thermaltake Core P1 is possibly the most unique-looking Mini-ITX case on this list. Rather than being a case in the traditional sense, it’s open-air, meaning your hardware is mounted on the chassis, with no walls obstructing enclosing it.

Granted, there is an option to get this case in a traditional style. However, that takes away one of its biggest strengths.

That strength is the level of customizability. Given the nature of the chassis, you need to mount a lot of hardware, so you have the option of 3D printing different mounts and shelves to help facilitate your PC parts while keeping the case open air.

It’s definitely not for everyone in terms of looks, but the customization options mean it can facilitate any kind of build regardless of how out of the box you’re going with it.

Does an ATX Motherboard Fit in an ITX Case?

No. Cases are built specifically for different motherboard sizes. Make sure you’re matching the two up; otherwise, you’re going to have to buy a new case.

Not at all. It certainly doesn’t improve its performance by any stretch, but there’s no harm in having them running.

Which is Better, a Fan or Radiator?

Generally, whether you want a fan setup or a liquid cooling system depends on your experience, needs, and how much space you have in your case.

Liquid cooling might look better and perform better, but there’s a reason that most PC builds use fans. As long as there’s something in there to keep your components cool, then you can use either one.