From the moment you get a taste of your first Power Armor in Fallout 4, you’ll be hooked. You’ll get your first suit of Power Armor during your second story line quest and it’s the rust bucket that is the T-45. After that you’ll be wonder where you can get your hands on better Power Armor.

First off, you’ll need a Power Armor frame for your Power Armor parts to be equipped to meaning that you can mix and match parts from different armors as and when you find and upgrade them.

There are five different types of Power Armor in Fallout 4 and each one can come in different models. These are:

You can upgrade a piece of Power Armor from one model to another if you have the correct materials and parks. Higher Models such as F or Mk. VI will require an Armorer and Science! rank of 4.

Hot Tip
It’s worth noting that the upgrade materials required are the same from say Model A to B or A straight to D. Therefore it might be worth holding off on upgrading until you have the required perks to save on materials.

Power Armor needs to be powered by a Fusion Core and these do deplete so you won’t be walking around in Power Armor for the whole game. As the game progresses you will be able to get your hands on Fusion Cores more readily but at the start, use sparingly.

Power Armor can be modified and repaired at Power Armor stations which you will find all over the commonwealth. Most people use the one in Sanctuary.

While you may be keen to get yourself the best Power Armor in the game straight away, like most things in Fallout 4, Power Armor scales with your own level. For example, T-51 pieces won’t start to pop up in your game until you reach level 14. There are also different variations of the Power Armor that may appear. For example, Model B versions of T-51 Power Armor may appear from level 18. 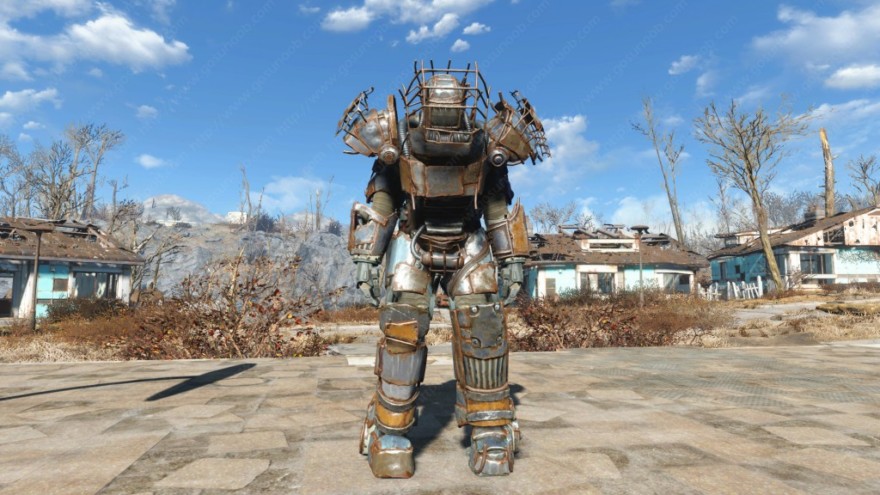 As you can tell from just looking at it, Raider Power Armor is cobbled together from scrap and is the weakest Power Armor and only has two models and limited scope for upgrades.

Where to Find Raider Power Armor?

Cave – Northwest of the Skylanes Flight 1665 there is a location called Cave. This is in the very bottom left of the map. Inside there is a full set of Raider Armor in the middle of the cave next to a dead raider.

Massachusetts State House – Found on the east side of the map) on a raider commander found in the final room.

Boomer – Raider leader of Outpost Zimonja. Has Power Armor raider arms and helmet. Is armed with a Fat Man so take on with caution.

Cutty – The Raider leader at the Poseidon Energy plant (far east of the map) and is found on the top level. This is also the location of the Endurance Bobblehead.

Slag – The leader of The Forged and can be found in Saugus Ironworks wearing Raider Power Armor except for the helmet. This is also where you can find the Explosives Bobblehead. 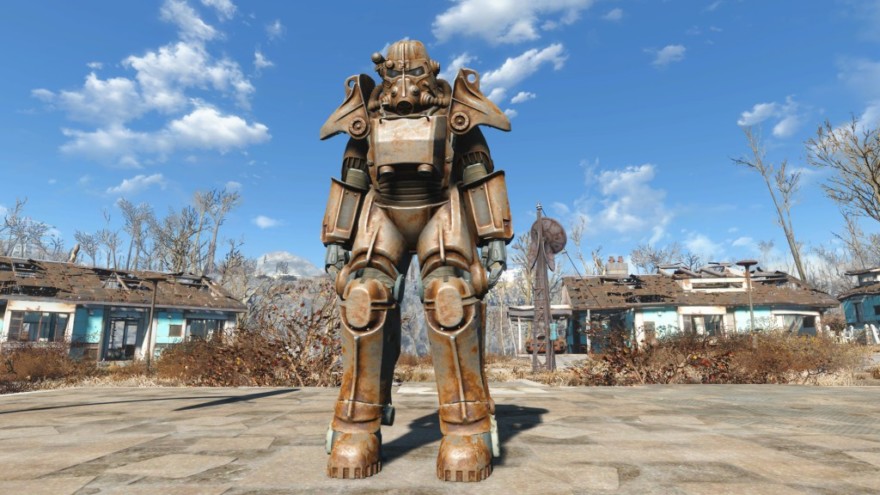 Where to Find T-45 Power Armor?

The only place to find a guaranteed full suit of T-45 Power Armor is on the roof of the museum of freedom during the When Freedom Calls main storyline quest.

If you clear out Hub City Auto Wreckers and kill Bridget and later return, the respawning gunner commander will be sporting various bits of T-45 Power Armor. 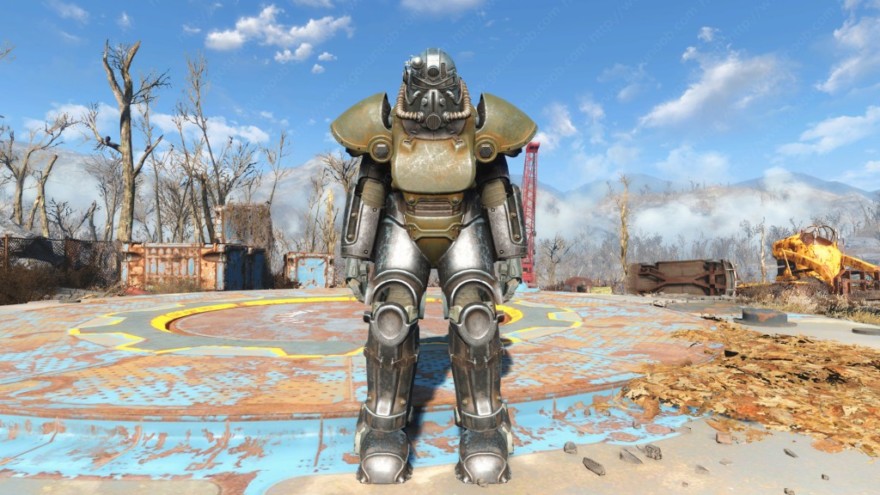 The middle of the pack when it comes to the best Power Armor is the T-51. It was widely in use before the outbreak of the Great War.

Where to Find T-51 Power Armor?

A full set of T-51 Power Armor can be taken from Clint who can be found at Quincy Ruins. 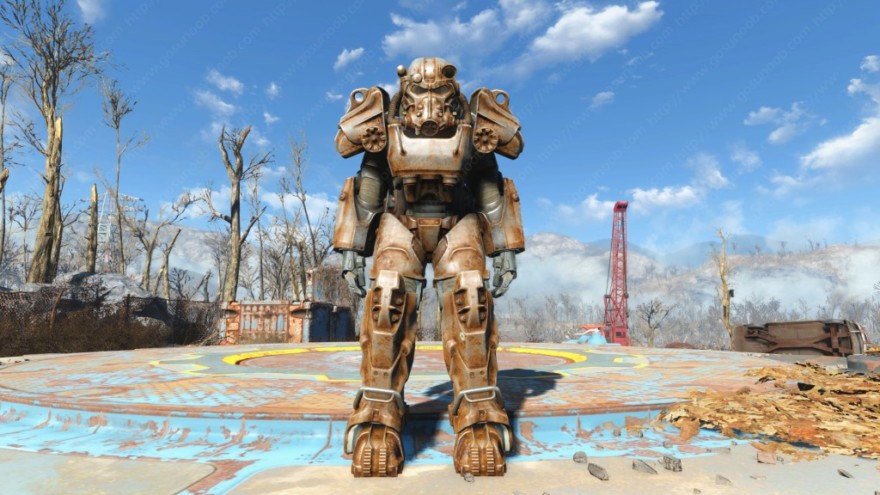 The second best Power Armor in Fallout 4 is the T-60 and one of the easiest to obtain as it is standard issue among the Brotherhood of Steel.

Where to Find T-60 Power Armor?

The easiest way to obtain a full suit is to join the Brotherhood of Steel (BOS) who you will first encounter at the Cambridge Police Station which is on the way to Diamond City from Sanctuary.

After a few quests you will get onboard the The Prydwen where you will find four full suits of T-60 Power Armor. One which is give to you and the other three you can steal.

If you complete the quest Blind Betrayal, you are awarded a Model D T-60 Power Armor suit with a Brotherhood paladin paint mod.

The easiest way to get a whole host of T-60 Power Armor is to get your sneak and pickpocket skills up and make sure you save before you try this! While exploring the Commonwealth you’ll often see BOS ships flying around called Vertibird. They will usually be attacking Super Mutants or other undesirables.

They will usually deploy at least one BOS Knight in T-60 Power Armor. Just pickpocket the Fusion Core out of their suit and they will exit the frame. Then when they aren’t looking, jump in the Power Armor and take it away. The Power Armor will be classed as stolen though so be careful when using it in future and who sees you getting in and out of it. 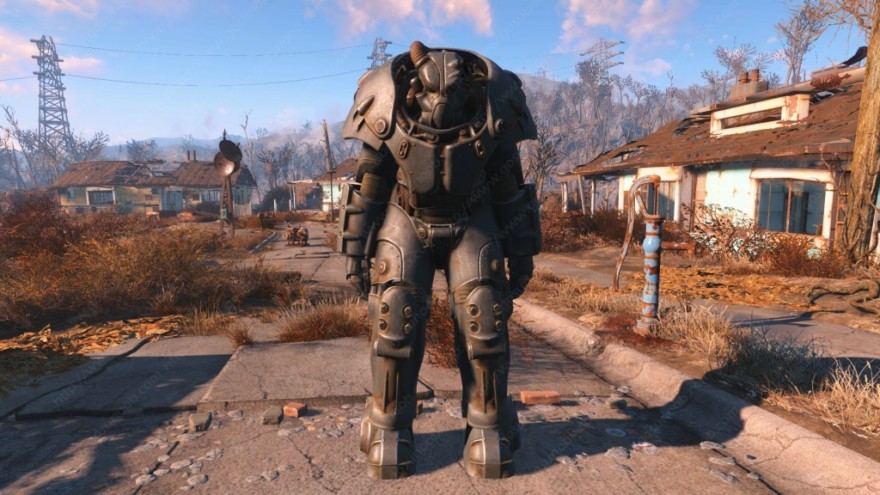 Here we have it, the best Power Armor in Fallout 4! The X-01 is the best of the best. These were the last Power Armor developed before the bombs fell.

Where to Find X-01 Power Armor?

X-01 Power Armor is level-dependent and therefore you will need to be at least Level 28 before one will appear. An exception to this is that in Teagan’s shop, onboard the Prydwen, there is an X-01 Helmet inside the cage. You’ll either need a Master Level lockpicking skill or to pickpocket the key from a BOS Knight-Captain usually found around the Power Armor bays.

If you are level 28 there are three places you are guaranteed to find a full set of X-01 Power Armour.

Hot Tip
Just note that it is best to avoid these places until you are Level 28, otherwise they may spawn and be locked to a different suit of worse Power Armor.

First off, make sure you’re prepared for a fight. Head east from Good Neighbor until you come to Custom House Tower. From here head west to find a turquoise building and circle around it until you come across the entrance. Head in and on the left is an elevator. Ride it up.

Upstairs there are three doors and enemies will emerge from the two side doors. These are an Assaultron and a Sentry Bot so get stuck in. Once defeated, push the buttons in each of the places where the robots were released from and the central door will open. Enjoy your new X-01 Power Armor!

Look for a pile of shipping crates on the west side of the training yard on the outskirts. behind an expert locked security gate is a full set of X-01 Armor.

You can find the checkpoint west of the Castle. On the west side of the building is a locked cage which can be opened with an expert level terminal hack. The X-01 Power Armor and a mini nuke can be found inside.

If you have the Fallout 4 Nuka World add-on, continue reading to find out where you can find the best X-01 available in the game!

Where to Find the Best Power Armor in Fallout 4?

While finding a full set of Mark I, X-01 Power Armor might be a real win, imagine if you could find a Mark V? Well, if you have the Nuka World add-on, this is a real possibility. 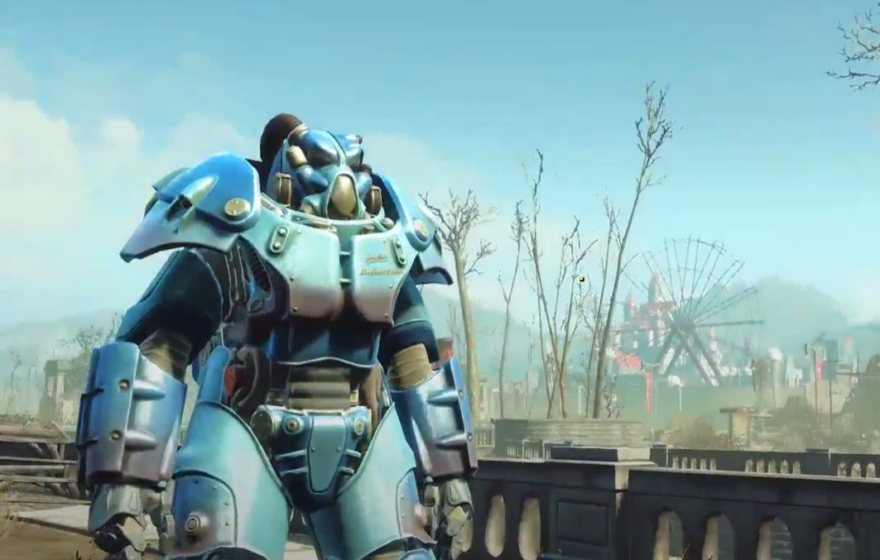 How to Get the Quantum X-01 Power Armor

The Quantum X-01 Power Armor shares the same stats as the regular X-01 but has a unique custom paint job in the Nuka-Cola Quantum colors. It also has a legendary effect which speeds up AP refresh.

While you may come across Mark VI parts on incomplete power armor suits across the Commonwealth, only this location is a guarantee of finding a complete set with such upgraded pieces. This makes it the best power armor in the game. It offers 1700 Damage Resistance and 1270 Energy Resistance and you can upgrade to Mark VI using a power armor station.

You can find this Power Armor located in the Galactic Zone of Nuka World on the first floor of Starport Nuka. You will need to find all 35 Star Cores to unlock the Power Armor display case and claim your prize. Locations can be found here.

There you have it, that’s the best Power Armor in Fallout 4!

How many power armor suits are there in Fallout 4?

Can you lose your power armor in Fallout 4?

You can lose power armor in settlements or anywhere on the map if you leave a Fusion Core in it. Settlers will quite often use the suit if the settlement comes under attack. Always remove your Fusion Core when you are finished with a suit.

[…] like the current armor system in the game? Want to make massive changes in the armor system of fallout? Here is the perfect mod for […]