There are several instances of small crossover episodes as the Arrowverse expanded. In “Duet,” The Flash teams up with Supergirl to defeat the Music Meister. There are instances of other characters participating in the main story for a few episodes as well. The Atom guests for a few episodes of Arrow and The Flash prior to going full-time in Legends of Tomorrow.There is also a pair of web-series, “Vixen” and “The Freedom Fighters: The Ray.” These are each touched on through the timeline but not covered here.

The major crossover spectaculars are the highlights of the Arrowverse. The focus here is to present the information at a quick glance in release order. This is not the end-all descriptor for the Arrowverse. It is far too complex and intricate to cover in a short article.

What is the Arrowverse?

The Arrowverse is a series of television shows based on DC comic characters. It is called the Arrowverse because it ultimately started with “Arrow.” From there, spin-offs developed all on their own, including The Flash, Legends of Tomorrow, Supergirl, and eventually Batwoman, as well as Black Lightning.

Each show frequently hosts guests from other shows in the Arrowverse and includes main characters and secondary characters. This includes Vixen and The Freedom Fighters: The Ray. These companion show crossovers are often the first introduction of new characters headed for a series, the most notable being Superman and Lois.

Starting from the 2014-15 Season, the Arrowverse has a major crossover event that 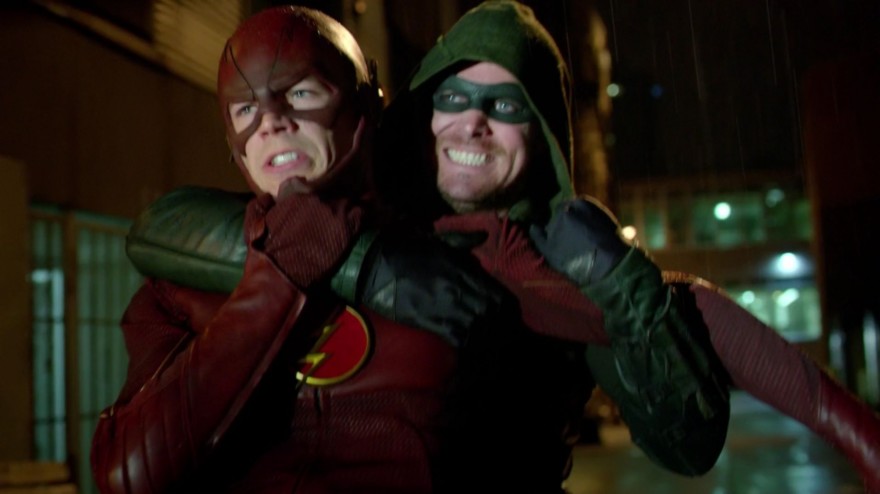 The first major crossover event features DC icons The Flash and The Arrow. Taking place in Season 3 of Arrow and season 1 of The Flash, “The Flash vs. The Arrow” kicks off the annual crossovers. This set up the possibility of future great crossover events.

Part 1 of the crossover centers around Team Arrow visiting Central City to investigate a deadly boomerang. Events don’t go quite to plan when a disagreement puts Oliver Queen (The Arrow) and Barry Allen (The Flash) at odds. The Flash heads out to tackle Roy Bivolo on his own, ultimately being manipulated by Bilovo and going on a rage-filled rampage. The only one who can stop him is the Arrow.

The second part of the crossover sees team Arrow track down the boomerang wielding Digger Harkness only to find an A.R.G.U.S. unit. Digger Harkness evades capture requiring The Arrow to call on The Flash for assistance. This leads to team Arrow and team Flash teaming up to stop Digger Harkness and the 5 bombs planted throughout the city.

To watch the crossover event in chronological order, follow:

Hot Tip
Vixen has two seasons of animated series on CW Seed. She was not considered part of the Arrowverse until the live-action debut in season 4 of Arrow. The animated series takes place roughly in the same timeline as Arrow. 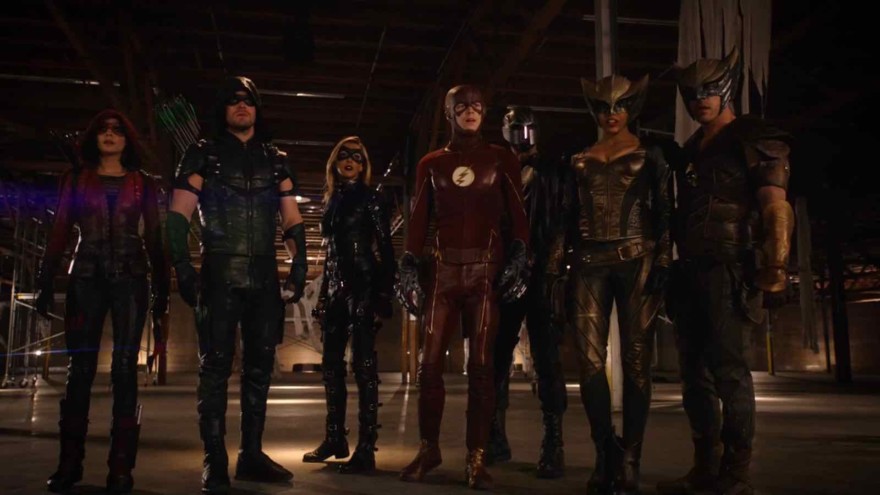 The next major crossover is the introduction of Kendra Saunders and Carter Hall. Hawkgirl and Hawkman, respectively, are the first glimpse at the Legends of Tomorrow. The crossover revolves around The Flash and The Arrow teaming up to take on Vandal Savage.

Starting in Central City, Vandal Savage is in pursuit of Kendra Saunders. After she and Cisco are attacked, The Flash is called upon to aid his friend. Moving Kendra to Star City to hide her with team Arrow’s help is a great idea until a man with hawk wings shows up to get her. Enter Carter Hall.

The Flash and The Arrow move the pair (Kendra Saunders and Carter Hall) to keep them hidden while they devise a plan to beat Vandal Savage. Malcolm Merlyn sets up an eventually botched meeting between Vandal, The Arrow, and The Flash. Team Arrow and Team Flash work together to develop a weapon capable of destroying Vandal.

To watch the crossover event in chronological order, follow: 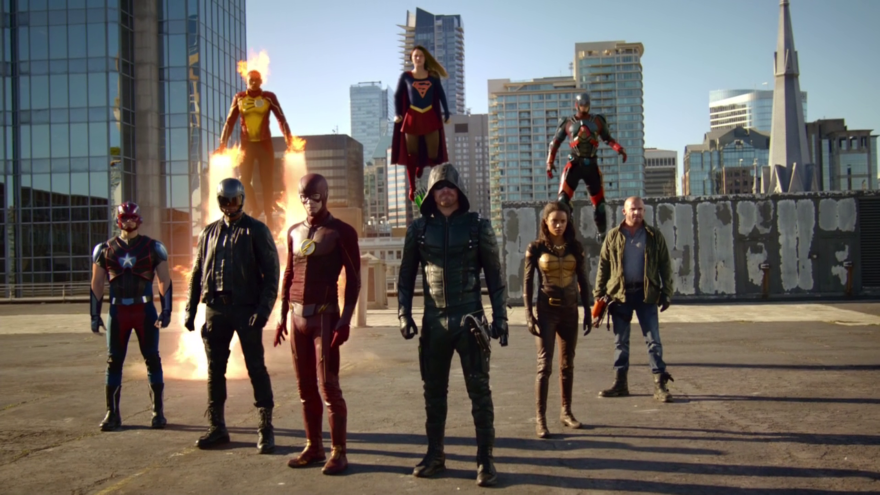 Invasion! is the first truly major crossover event featuring the collision of 4 different storylines. While technically Supergirl doesn’t have an actual “Invasion!” episode, she is recruited in “Medusa S2, E8,” and it is widely accepted as the start of the “Invasion!” event. “Invasion!” sees the heroes unite against the alien Dominators.

In season 2, episode 8 of Supergirl, Barry Allen and Cisco drop in to request the help of Kara Danvers (Supergirl) to stop an alien invasion on their Earth. This requires a little backtracking from The Flash’s storyline to explain why they are there.

The Flash teams up with The Arrow to tackle the alien invaders known as the Dominators. The battle seems too big for them to handle alone, and they quickly enlist the help of other heroes. Tracking down the Legends of Tomorrow and enlisting the help of Supergirl should provide the firepower they need. Unfortunately, the train comes off the track when information related to Flashpoint is revealed. This leaves the group unsure of who can be trusted.

Oliver Queen deals with an alternate dream state in Arrow where he never got on the Queen’s Gambit.He ultimately realizes his dream is a phony when little details begin to pile up. His team works to destroy the alien mind control device with The Flash and Supergirl.

Once the Legends of Tomorrow learn of the Dominators plot, they team up with The Flash, Team Arrow, and Supergirl. Stein figures out how to end the Dominators once and for all. 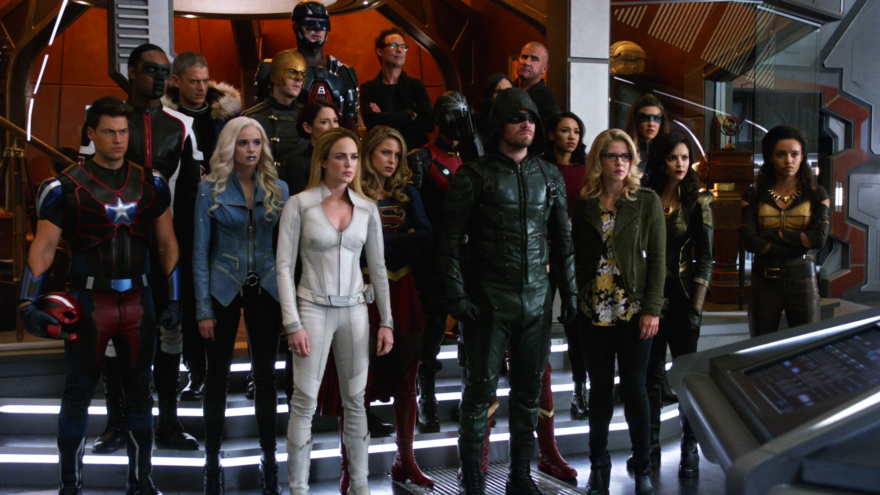 “Crisis on Earth X” provides Nazi invaders from Earth-X and evil doppelgangers of The Arrow and Supergirl plus Barry and Iris’s wedding. Packed full of action and once again stretching 4 storylines, “Crisis on Earth-X” takes 4 episodes across 4 different series to complete.

This crossover extravaganza starts with a Barry and Iris wedding that draws all of their friends together. Things take a quick turn from bright and happy to dark and deadly when Nazi-Supergirl shows up with some friends. The wedding is put on hold, and the heroes marvel at their antagonists’ skill-matching.

The focus switches to stopping the Nazi-invaders. The Flash, The Arrow, and Supergirl meet their match in themselves as they tangle with evil doppelgangers and the Reverse Flash. It ultimately is for naught, as the villains escape. Emotions and action are high.

Part 3 of “Crisis on Earth X” is a ping pong of both settings. The hero’s chances at victory are dwindling and ultimately rely on some unexpected help. This is the best introduction for The Ray, the basis for the animated series that takes place on Earth-X.

The climax to the crossover event sees a menagerie of heroes join the fight alongside Flash and Arrow teams. The Legends of Tomorrow save the day for Supergirl, and we get to see some long-lost backup firepower. Mr. Terrific, Wild Dog, and Black Canary show up to give the Earth-1 teams much needed support at STAR Labs. 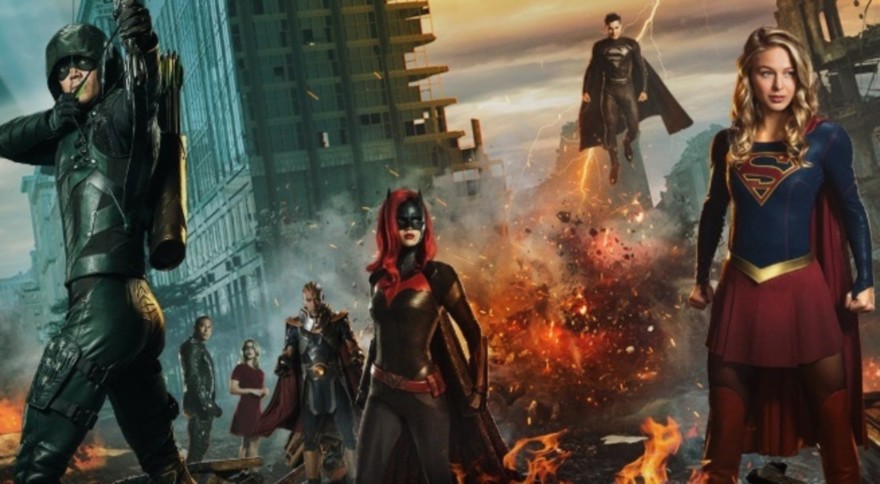 The introduction of the Monitor sets off the events in “Elseworlds.” Changing reality on Earth-1, Dr. John Deegan of Arkham Asylum causes Oliver Queen and Barry Allen to switch abilities. The Flash and The Arrow recruit the help of Supergirl and are assisted by Batgirl. A number of new characters are also introduced during this crossover.

Elseworlds part 1 dives right into Barry Allen and Oliver Queen switching abilities. The Monitor had bestowed the Book of Destiny upon John Deegan.Obviously, this is a problem, and it is compounded when team Flash doesn’t buy it. There was a shift in the timeline, and the heroic duo decide to enlist the help of Supergirl. They travel to Earth-38 and meet Clark Kent and Lois Lane.

Barry and Oliver are still ability swapped as they head off to Gotham City with Supergirl to find John Deegan. Kate Kane (Batwoman) ultimately gives them the details that lead them to Arkham Asylum.

Part 3 has a powerless Barry and Oliver on the run from a fake Superman (Deegan). They turn to Cisco (crime lord on this Earth) after being hunted by Killer Frost and John Diggle. Vibing to the Fortress of solitude, the pair enlist the help of Superman. Part 3 of “Elseworlds” drops a hint at the next crossover and reveals The Martian Man Hunter and Brainiac-5. 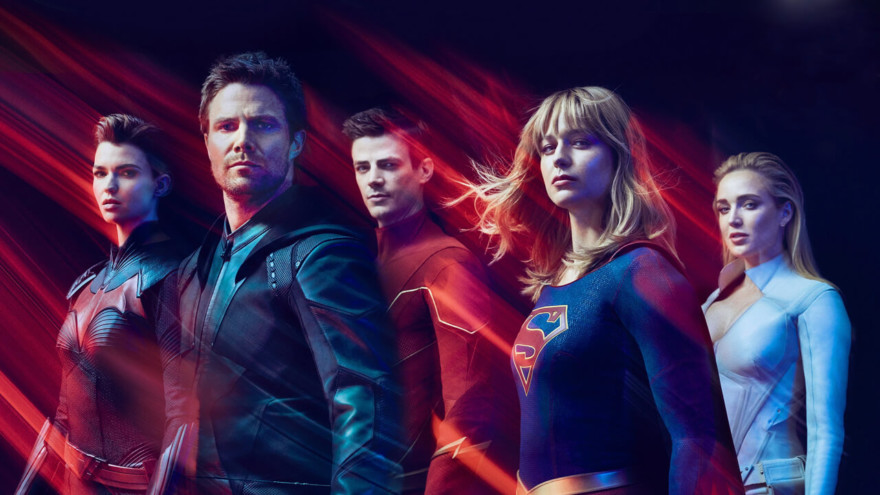 The most massive, ambitious crossover event for the Arrowverse is “Crisis on Infinite Earths.” This crossover event ties 5 storylines into one point. The Arrow, The Flash, Supergirl, Batwoman, and the Legends of Tomorrow team up with The Monitor to stop the Anti-Monitor from destroying all of reality. The 5-hour event takes place over two months and reveals numerous characters from the DC Universe movies and television shows.

Hot Tip
The Green Arrow and the Canaries was a planned pilot for a potential spin-off from Arrow. The episode was the highest-rated Arrow episode of the season, scoring just over the series finale.

In Supergirl Season 5, episode 9, The Harbinger, at the urge of the Monitor, begins to round up the greatest of heroes, including The Flash, The Arrow, Supergirl, Batgirl, White Canary, The Atom, and Superman to stop an impending crisis. The looming danger forces the heroes to prep for battle while the Martian Manhunter and Alex Danvers recruit Lena Luthor to find a way to save Earth-38.

In Part 2 of the “Crisis on Infinite Earths,” Ray Palmer uses an invention to track new recruits for the upcoming conflict. Iris West, Clark Kent, and Lois Lane are sent by the Monitor to locate a Kryptonian. Batwoman and Supergirl are searching for Bruce Wayne.

Black Lightning gets in on the action at the request of Pariha. The Flash-90 has information that is useful for the fight against the Anti-Monitor from the “Elseworlds” conflict. Black Lightning, Barry, Cisco, and Caitlindevise a plan of action. John Constantine makes an appearance, with John Diggle and Oliver in Purgatory. The Vanishing Point sees several of the heroes, now the Paragons, and the exchange of Superman for Lex Luther when Lex exchanges his name with Clark Kent’s in the Book of Destiny.

The last remaining Paragons are stuck at the Vanishing Point looking for a way out. Oliver Queen steps in with some new information about what he has become. He has taken on the role of The Spectre. The Flash returns to the speed force with a boost of power from the new and improved Oliver Queen.This part of the crossover ultimately reveals The Monitor and The Anti-Monitor’s origin.Oliver Queen sacrifices himself to save the multiverse.

The heroes, as the paragons, are still battling the shadow demons. The epic climax of the massive crossover event features The Anti-Monitor in a slugfest with the greatest heroes. A bomb created at STAR Labs by Ray Palmer and delivered by The Flash eventually finishes him off. The heroes take time to remember Oliver Queen’s sacrifice in an emotional wrap up to the crossover.

What’s Next for the Arrowverse?

There are so many exciting things to look forward to in the Arrowverse!

Ultimately the Arrowverse brought to the small screen the same feeling The Avengers took to the big screen. It has great storylines and fantastic actors. There is enough depth in the series for new fans and old. The crossovers have increased in intensity until reaching a climax at “Crisis on Infinite Earths.” It might be a while before the Arrowverse hits something that big again, but it would be surprising if it didn’t.

The graphic shows release seasons on an annual schedule. The information presented covers a mile-high overview and really can’t do the Arrowverse justice. It would take a novel to depict the intricacies the shows provide. A novel, or 6 shows spanning multiple timelines, that is.