No action or fighting anime is complete without a compelling character. These strong characters can be very influential, and so, here is a list of 21 of the best swordsmen throughout anime history.

Gintoki is continually voted as one of the top swordsmen amongst anime fans. He is the main protagonist in the anime Gintama, a historical comedy with a fair few bunches of incredibly animated sword fights.

He is known as the White Devil, which comes from a combination of his white hair and his devilish fighting style.

Gintama is a show recommended for those who are fans of both the historical and sci-fi genre. Yes, they are both combined in this comedic series with aliens invading feudal Japan. 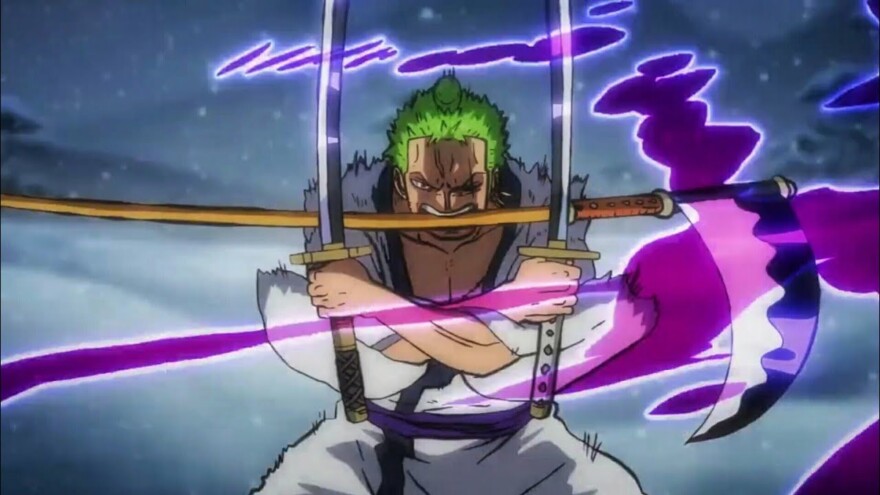 Zoro is a character from arguably the most popular anime on this list, One Piece. His fighting style is called santoryu, it is unique to his character, and it means three katana fighting style.

Whilst he is not a samurai, his impressive swordsmanship and his demeanour often mean that he is mistaken for one.

One Piece is recommended for those who want a really long-running series. It is great for fans of pirates and comedy.

Guts is a swordsman out for revenge, and he aims to achieve with his sword, the Dragon Slayer.

His skills with a blade are unimpeded by his prosthetic left forearm, and it makes him even more likable as a protagonist.

And not only is he after vengeance, but he also has to escape the demons that are hunting him until his death.

A story of tragedy and violence, Beserk is a show great for fans of action and gore.

Ichigo is a teenager with distinct orange hair, which has caused him ridicule throughout his life.

He becomes a Shinigami and is given a zanpakuto as a result. He takes the form of a katana. But he begins with very little power and needs to train to unlock the sword’s true potential.

Bleach is a classic and very popular anime, sometimes regarded as one of the ‘big three.’ I would recommend it for fans of action and supernatural anime. 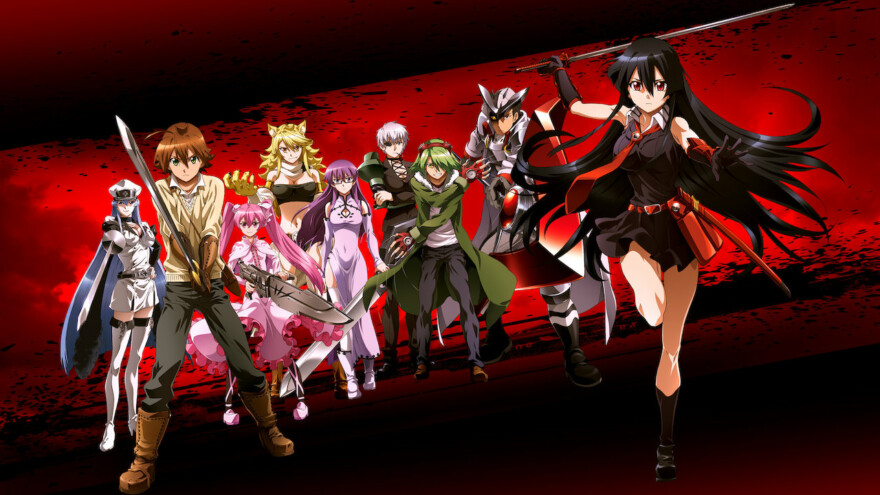 I don’t think it would have been possible to make this list without at least one assassin. Akame is a skilled swordswoman, a hired blade with a seemingly serious and sometimes cold demeanor.

But she is much more in-depth and is considered one of the strongest assassins in Akame Ga Kill’s universe.

Akame Ga Kill is not for the faint-hearted with its horror and gory animation. It is also a must-watch for fans of gritty and psychological anime. 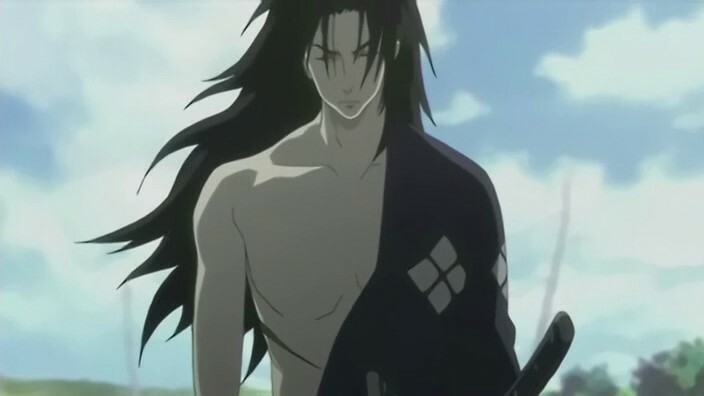 Jin is one of the more traditional samurai on this list. He fights with a traditional kenjutsu style and has the proper demeanor of a trained samurai.

His past is shrouded in mystery and became quickly popular with those wanting to unravel his backstory.

Samurai Champloo was a very famous anime from the early 2000s. In fact, it is the only anime to have a hip-hop music produced by Nujabes before his tragic death in 2010.

Rin is the main protagonist in the show, but he is a little different in that he has powers inherited from Satan himself.

He is able to slay demons with his katana called kurikara. Unsheathing his katana causes him to transform from his human form into his demon form.

Complete with pointy teeth and a tail, Rin has to fight away the evil spirits, though one resides in him.

Blue Exorcist is also known as Ao No Exorcist, and it follows a unique cast of characters who go to a special school, training to become exorcists. 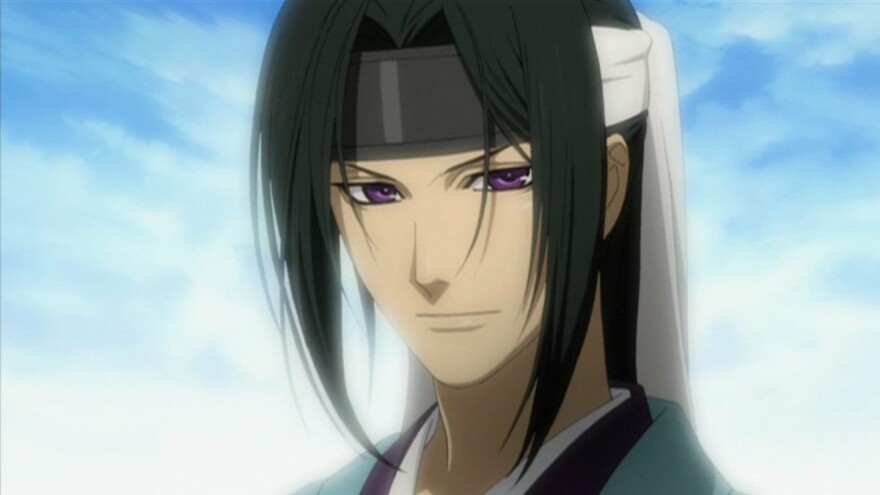 Hijikata is not only a skilled anime swordsman, but he is actually based on a real, historical samurai known for his skill with a blade.

Hijikata is often seen as cold and calculating, but he always wants to do what is best for his team.

Hakuouki is a great recommendation for fans of historical fantasy, and it is based on a light novel with the same name. 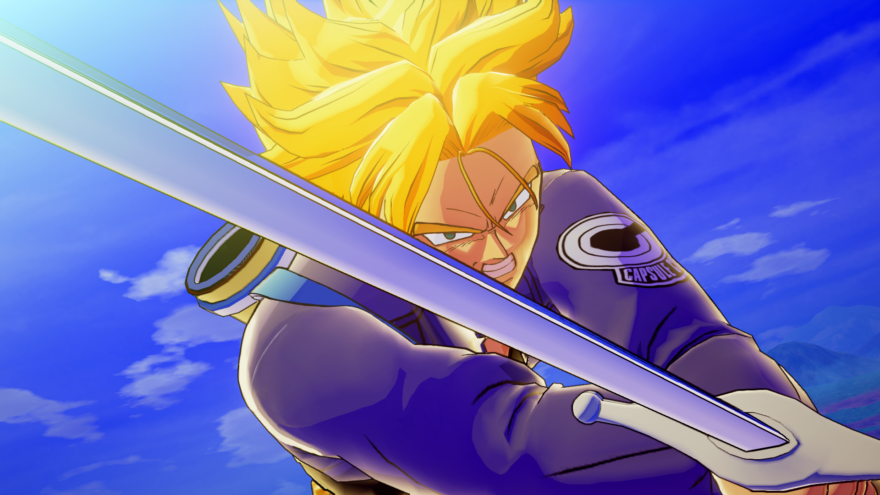 Whilst it is his counterpart, Future Trunks, who is more skilled in the ways of the blade, Trunks is not a stranger to the sword. The child of Vegeta and Bulma, Trunks, is a hybrid with a somewhat cocky personality.

But his skills are nothing to be scoffed at, as with Goten, they founded the Kikoukenjutsu sword style.

Dragon Ball Z has generations of fans and many different series. It is a classic anime with a heavy focus on fighting and futuristic fantasy. 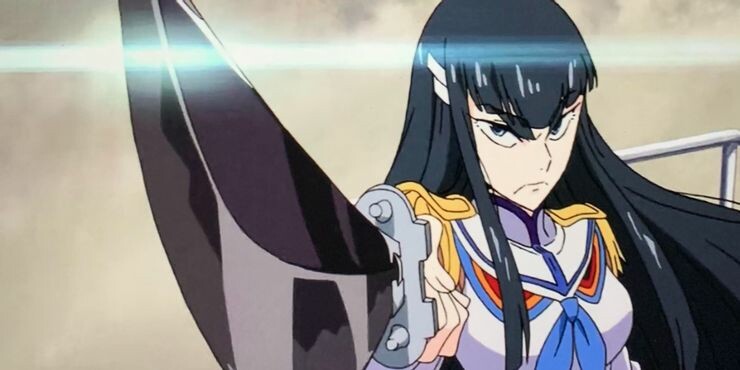 As the school council president, Satsuki is both feared and somewhat respected by the rest of the students. She fights with her sword, Bakuzan, and is able to defeat those with Ultima Uniforms with this weapon.

This proves that even without an ultima unform, Satsuki is one of the most powerful people around.

Kill la Kill is an anime set in a strange high school. What is so strange about this school? It is ruled by the School Council President and the elite four.

Classes only gain special treatment if they are looked upon well by these prestigious students. 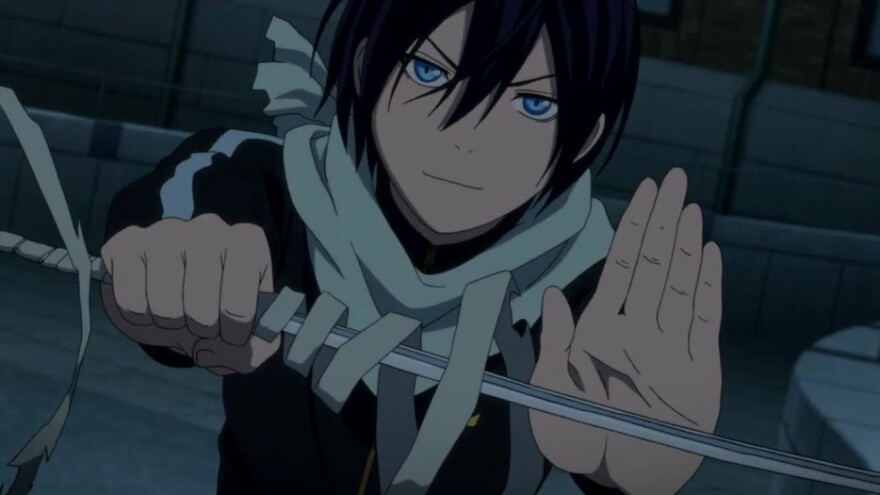 A god with a weapon that quit, surely, he can’t be that good of a swordsman. Yato is a powerful god, despite what his reputation and personality may suggest.

But, after meeting new companions to join his team, he begins to regain his reputation and power. One that caused other gods to despise him.

Noragami is a supernatural anime with lovable yet complicated characters. Follow the delivery god on his journey for retribution and to help the young girl who saved him regain control of her soul.

The title character of the show, Inuyasha, is a hybrid of a yokai-dog and a human. This makes him a half-demon. His own sword is made from his father’s fangs, and it holds a strong supernatural power.

He has mastered many abilities when wielding this sword, which include the red tassaiga, designed to destroy any barriers blocking his path.

Inuyasha is set 500 years in the past in Japan. Kagome awakens in this time amongst all the fighting to find that the gem sought after by demons has been reborn inside of her.

Ling dual-wields daggers and is incredibly skilled at using these blades. Part of his reason to become so skilled at fighting is the many assassination attempts made on his life.

Despite not being an antagonist, he has a strong rivalry with the main protagonist of the show, Edward Elric.

Yuu is one of the main characters and protagonists of the series, D.Gray- Man. He is seemingly stoic upon first introductions, and many people are known to address him as the ‘pretty boy’ type.

Despite being loyal to his team, Yuu’s competitiveness, especially in a fight, becomes a greater priority than protecting those around him.

The Black Order is formed for the purpose of one thing, destroying demons that roam the world known as Akuma. Follow this strange cast as they make their way through hoards of demons to try and reach their leader, The Earl.

7. Alibaba –Magi: The Labyrinth of Magic

Based on the character from legend, Alibaba is a kind soul and will fight to save those in need. Despite his love for money and luxury.

An adventurous soul, Alibaba joins his new friends in dungeon diving, a dream he had since he was a child. These adventures allow him to hone his skills and become very powerful with his one hand fighting style.

In the world of Magi, strange labyrinths known as dungeons begin appearing throughout the land.

It is the dream of any adventurer to explore and complete these labyrinths, though the dangers that lurk inside might be worse than they expected.

In an anime concerning gangs and turf wars, Kuroh stands on no side but his own and that of his late master.

He is renowned for his swordsmanship and martial arts skills and is known throughout the lands as ‘The Black Dog.’

In this series, his job is to protect a seemingly innocent student framed for the murder of a Red Clansman.

The whole family of Kamado consists of skilled fighters and swordsman. But Tanjirou is the one to bear to the burden of supporting his family after his father’s untimely demise.

Tanjirou and his sibling join the Demon Slayer Corps after returning to a horrifying sight at his family home.

Leaving to sell coal at the village to make ends meet was the point at which Tanjirou’s world was left in ruins. 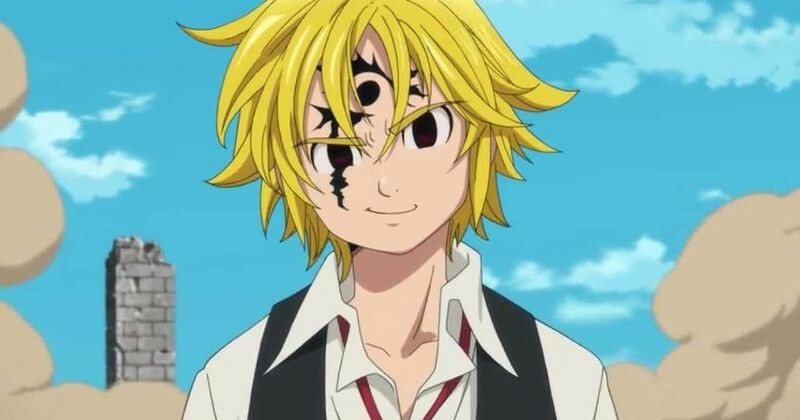 The sin of wrath and the symbol of a dragon, there is no doubt that Meliodas is a skilled fighter. He is the leader of the Seven Deadly Sins and is the main protagonist of the titular show.

Though he is the protagonist, there are secrets in his past which have given him his position as the Sin.

With such a wide cast of characters, there was no way we were getting through this article without at least one character from Naruto.

With the name, Demon of the Mist, Zabuza has an appropriately horrifying fighting style with his blade.

After a failing plan, Zabuza decided to work as an assassin in is known for taking on any job, as long as the price is high enough. 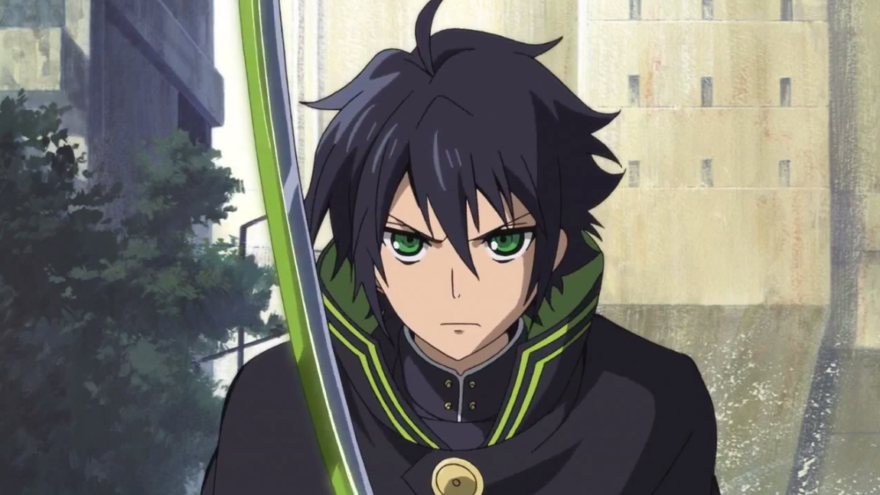 Taken in by an orphanage, Hyakuya was able to keep his smiling and optimistic demeanor growing up. His bright personality meant he could easily make friends in the orphanage, but he was also shown as having a cunning side.

Hyakuya wields a powerful sword, and it gains power from blood, Hyakyua’s own blood.

Also known as Owari no Seraph, Seraph of the End is set in a world where vampires have made their presence known and have taken over.

With a virus that kills adults, these vampires have promised protection to survives in exchange for blood. 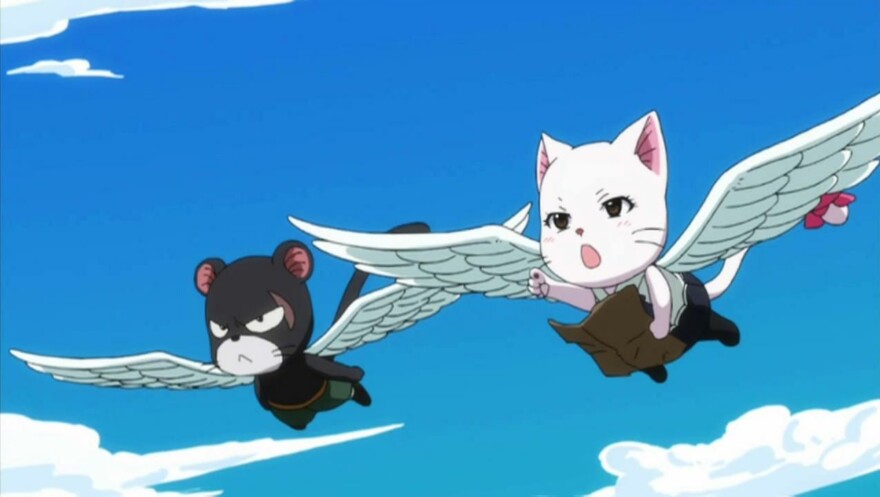 At first, he only appears to be a tiny cat, but Pantherlily is just as powerful as his jungle cat namesake.

When transforming into his full size, Pantherlily wields a gigantic sword, and up until that point, many opponents underestimate him.

Despite his dislike of loud, annoying people, Pantherlily is friends with many of the guild members, especially his owner, Dragon Slayer Gajeel.