Whether it’s just to hype up the viewers or have an important point to the story, it’s as ubiquitous as saying “nani?!” Especially for shounen or mahou shoujo shows, you have to have a transformation sequence.

And you know what? We love them too! So today, let’s go over the best and most memorable anime transformations ever.

From Goku powering up to Utena turning into a car, we got those covered. 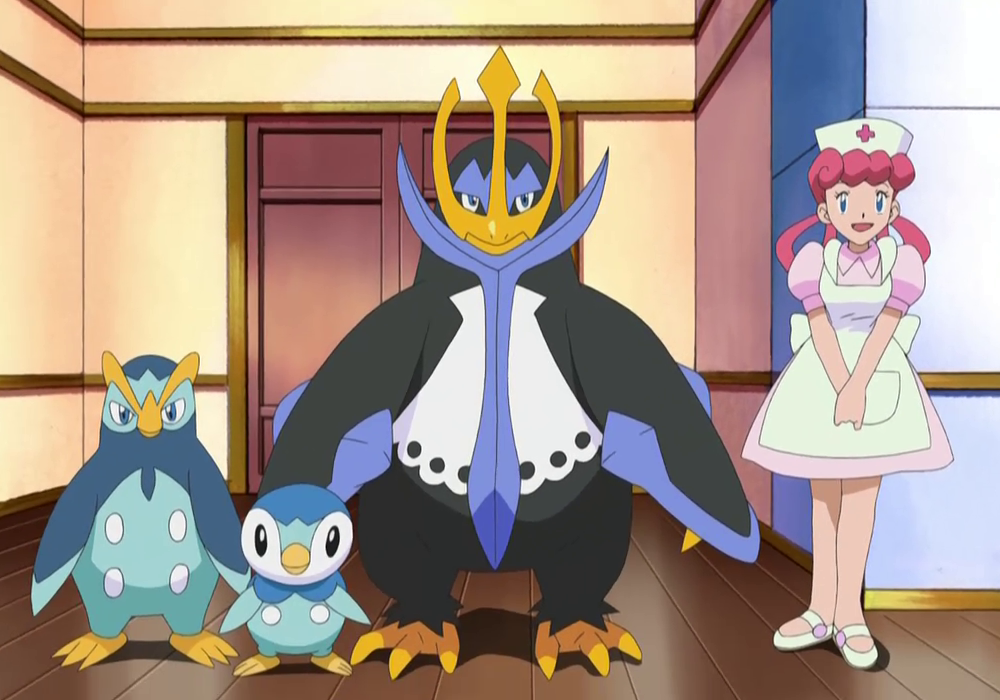 Let’s start this list with cute and cool creature transformations!

A lot of us grew up watching Ash’s Pokemon evolve and change from adorable critters to ferocious beasts.

Who could forget how his timid Charmander became a hard-headed Charizard?

The Pokemon series has definitely perfected and popularized creature transformations. The series has even expanded how these creatures transform.

Not only can the Pokemon naturally evolve by leveling up or using a stone, but there are also now Mega Evolutions and Dynamaxing!

These make your Pokemon look like a unique variation of the original or turn it into giants!

The upcoming games even add crystal forms, so anime fans should keep an eye out when this gets added in the show too. 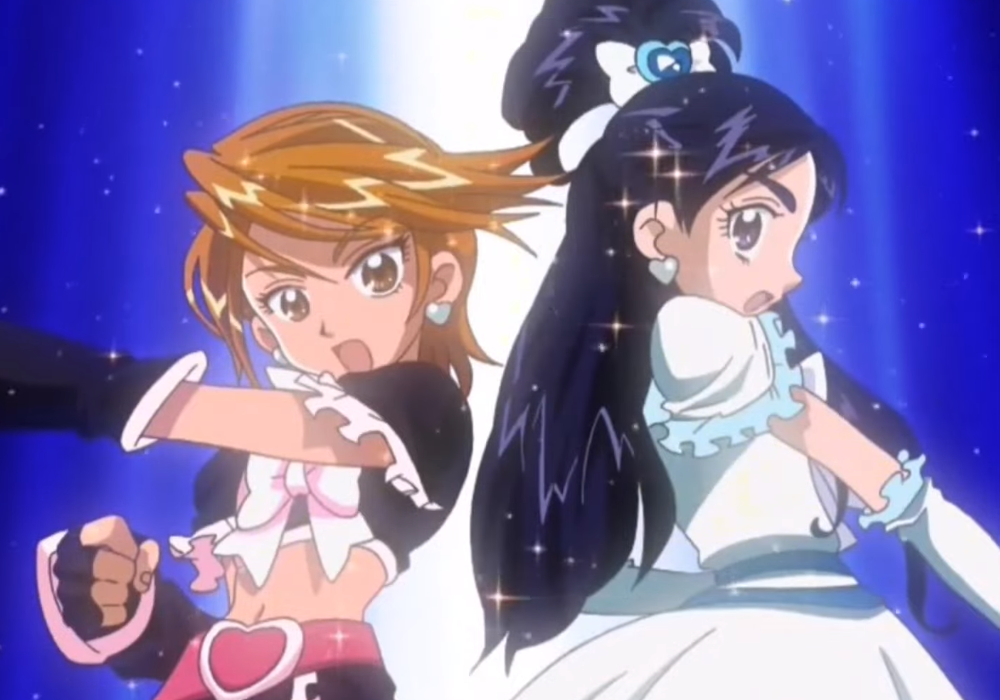 The mahou shoujo genre is popular for a reason. It’s not just for kids, but for grownups too. It hits the spot in our hearts for cute and magical fun.

One of the classic and long-running magical girl series is Pretty Cure or Precure.

It’s got all the mahou shoujo elements that you need – cute and inspiring characters, magical action, fluffy sidekicks, and awesome transformations.

In these transformations, the characters would slowly reveal their magical girl outfits.

From glowing lights and sparkles to being covered by petals or diving in and out of water – Precure is a pro when it comes to transformations. 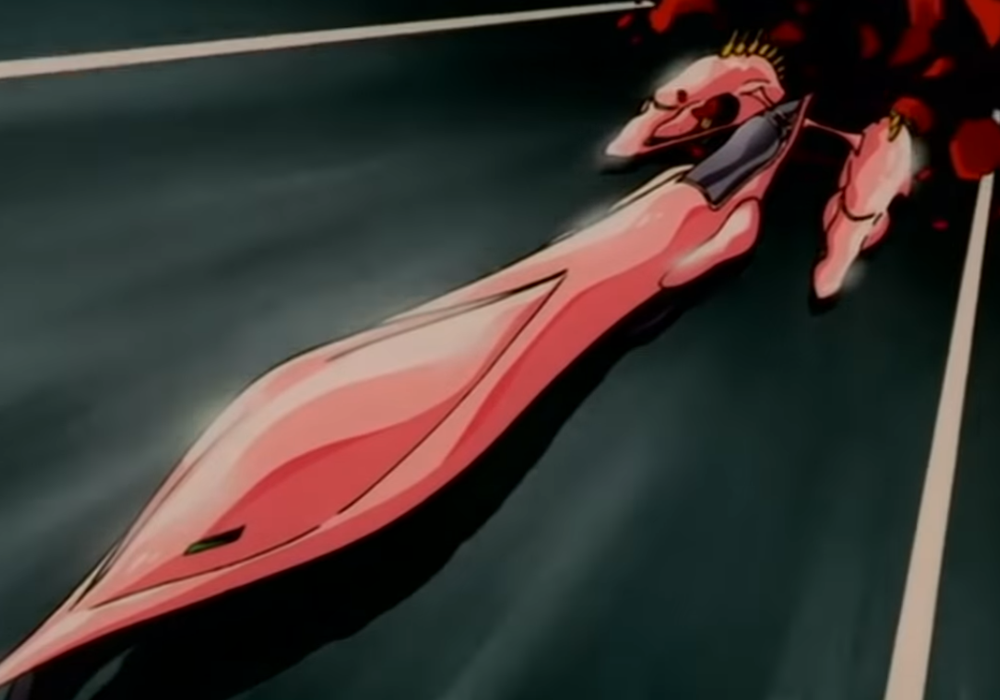 Utena was revolutionary for how it showed character relationships and dynamics. For a lot of anime fans, it was progressive and ahead of its time.

Perhaps in certain areas, it was too ahead. At one point in the story, Utena actually transforms into a car!

You heard that right – she doesn’t transform into a magical girl or a masked rider. She becomes the car.

There’s actually a reason for this! It shows independence and empowerment. And they walk – or drive – away from those controlling them.

Utena truly is one of a kind. 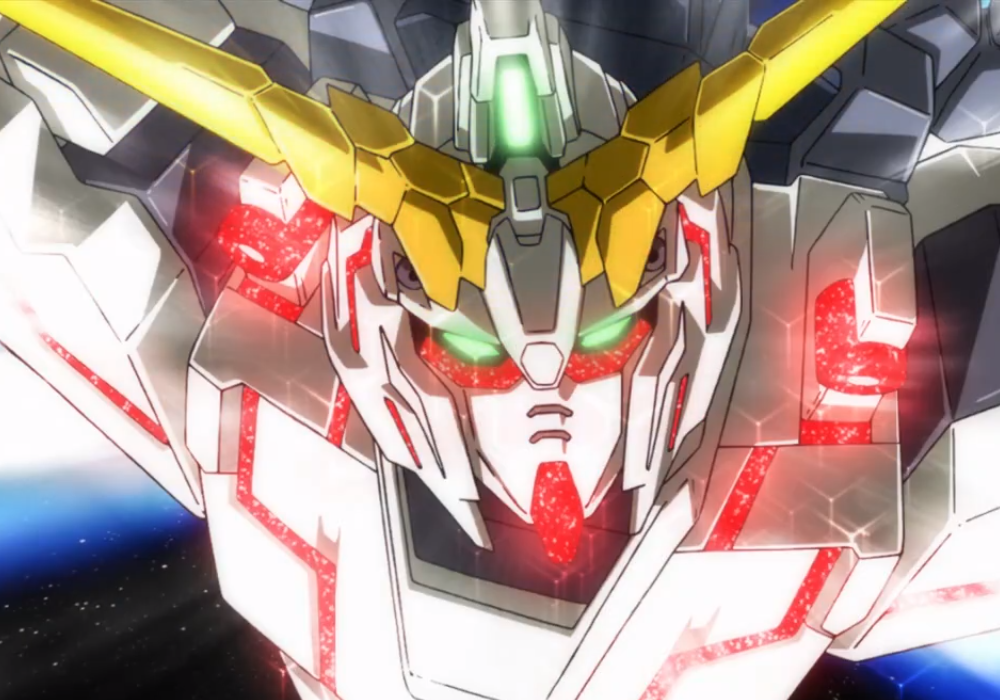 Gundam has had amazing mecha transformations over the years, so it’s hard to pick just one.

But for this list, we chose Gundam Unicorn’s first ever transformation with young Banagher Links.

In a span of one episode, a lot of things happen for 16-year-old Banagher.

He pilots a mecha for the first time and shows his potential. He even manages to overwhelm a veteran pilot and push her into space!

While it’s true that inner beauty is what matters, Kuranosuke in Princess Jellyfish teaches us that taking care of your outer beauty is a form of self-care.

It can also help you navigate through some aspects of life.

He gives the residents of Amamizukan a makeover!

They were already amazing in their own unique way, but he helped them come out of their shell and discover a different way to express themselves. 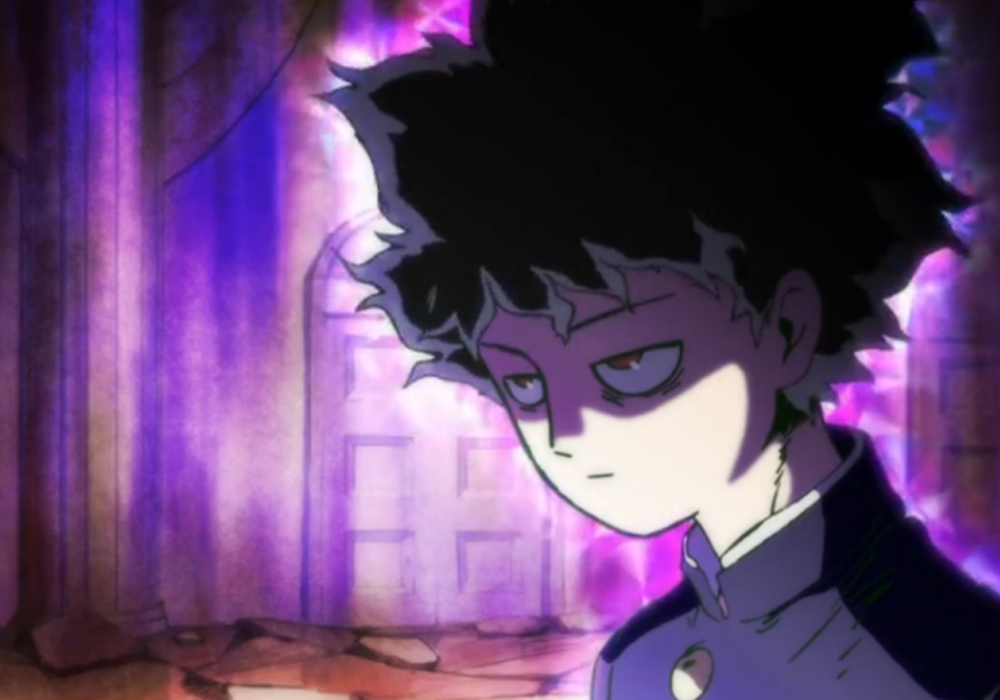 Mob is a nice boy who just wants to help people and have friends.

He’s so nice that he gets taken advantage of by slimy and deceitful people – we’re looking at you, Reigen!

But underneath that calm and pleasant disposition is a kid who actually harbors powerful psychic powers. Mob himself is not aware of this.

So when he unknowingly unleashes it due to his rage, it’s terrifying and mindblowing. It’s an insane transformation when you remember the kind of kid he is. 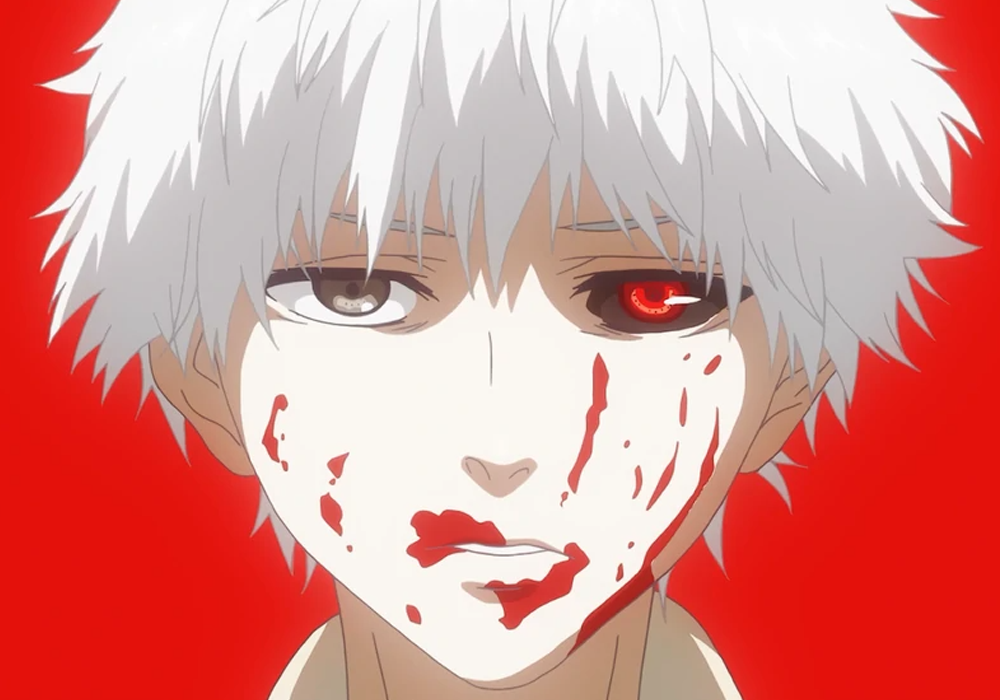 Tokyo Ghoul can get really bloody, scary, and creepy. The show’s main protagonist, Ken Kaneki, unfortunately, goes through a torturous transformation fitting for the story’s genre.

This isn’t for the faint of heart!

After undergoing a mind-breaking and soul-crushing torture, Kaneki accepts being a ghoul and transforms.

His hair turns fully white, and his eye becomes black with a red iris.

It’s a memorable but quite an upsetting transformation. 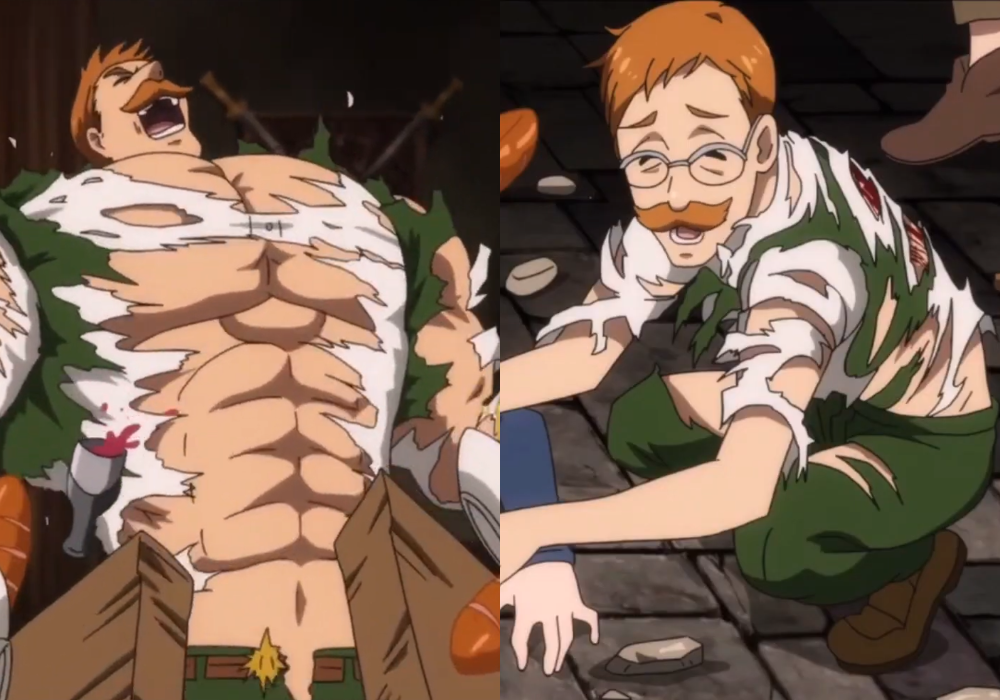 Because of his powers called Sunshine, Escanor shows his peak form during the day.

He is muscular, quite fit, and definitely not someone you should mess with!

But as the day fades, so do his powers. At night, he loses his gains and becomes a Luigi look alike! Mamma mia! 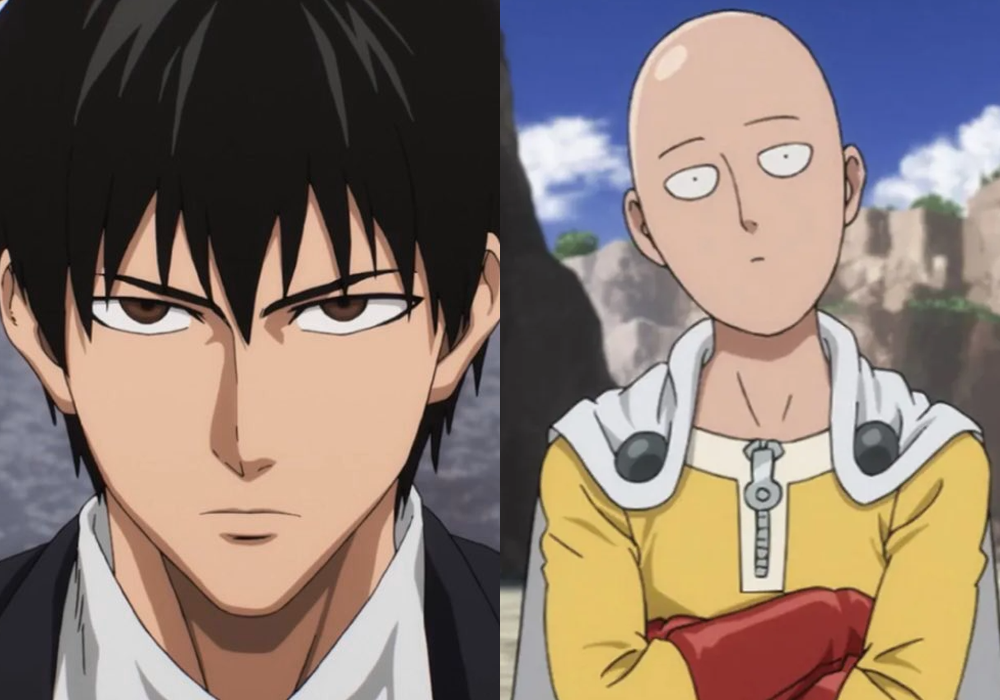 In order to become a great and mighty hero, Saitama harshly trained for ages.

He did 100 pushups, situps, and squats, plus a 10-km run everyday for three years.

And you know what? All that training paid off! He became the strongest hero in this universe!

Unfortunately, there is a downside to it: The complete loss of his hair.

But having a chrome-dome isn’t so bad when you’re a hero like him. Sure, he looks goofier now, especially with his poker face expression.

However, that’s a small price to pay to transform into a man who can one-punch enemies. 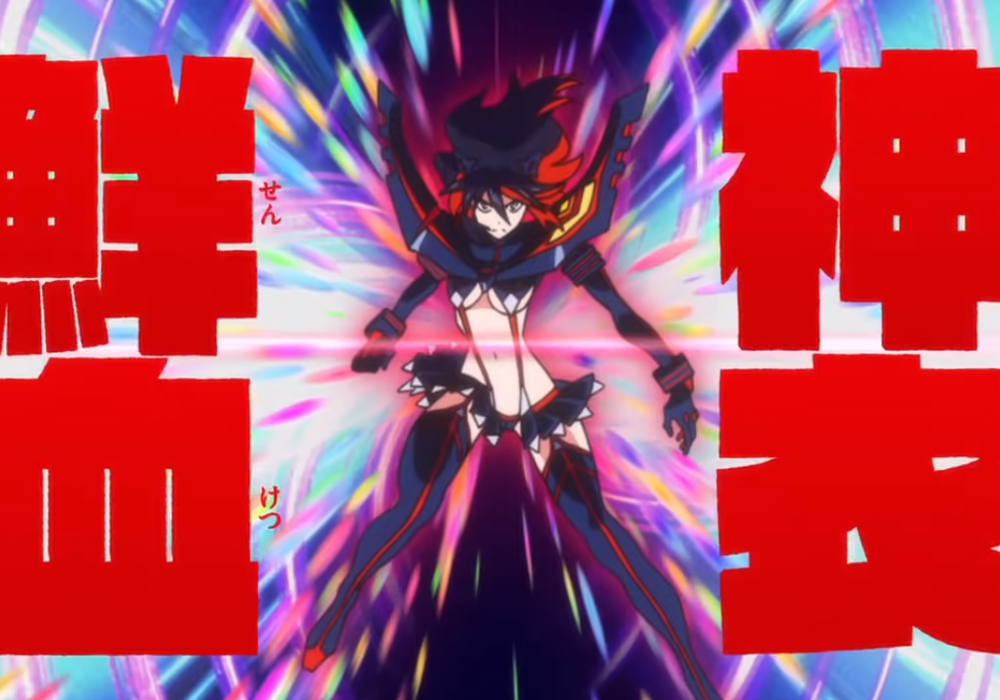 In Kill la Kill, clothes are quite powerful. They grant immense strength but can also be quite dangerous and overwhelming to their wearer.

Kamui is special clothing made using Life Fibers. These threads are alien, sentient, and parasitic beings that can grant powers but can also be violent.

To lessen the harm that some Kamui do, they transform into skimpy clothes to minimize surface contact. Yep, that’s the explanation. 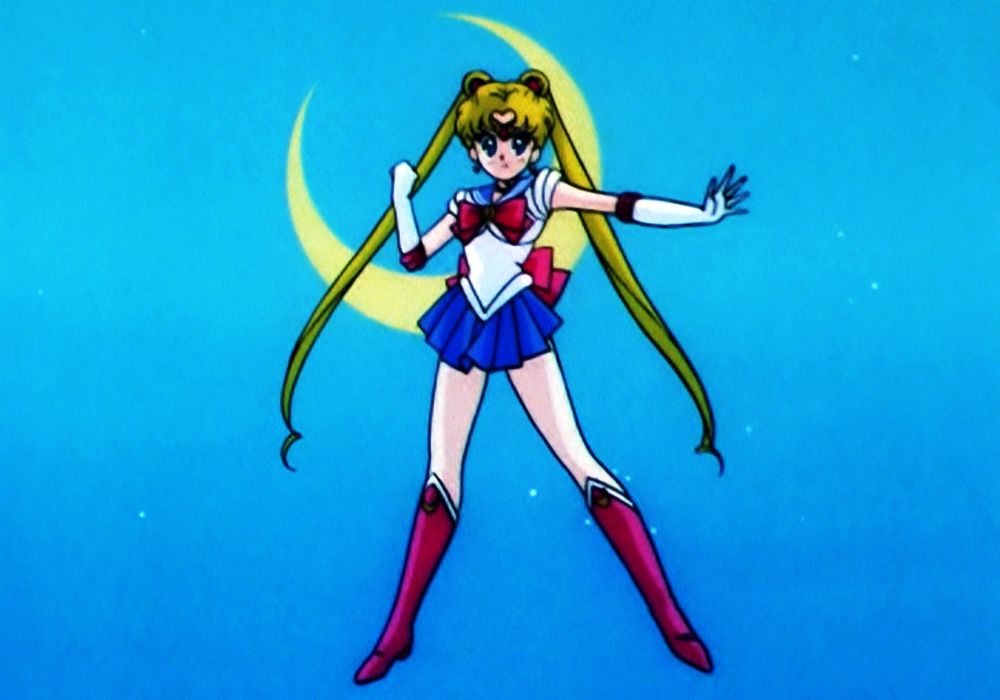 Our anime transformation list won’t be complete without Sailormoon.

When it comes to magical transformations, Sailormoon’s Moon Prism Power Make Up is a classic. It set the standard for a lot of mahou shoujo!

The whole transformation sequence is lengthy but in a good way. When you’re all about being a glamorous superhero, you want the transformation to be detailed and dazzling! 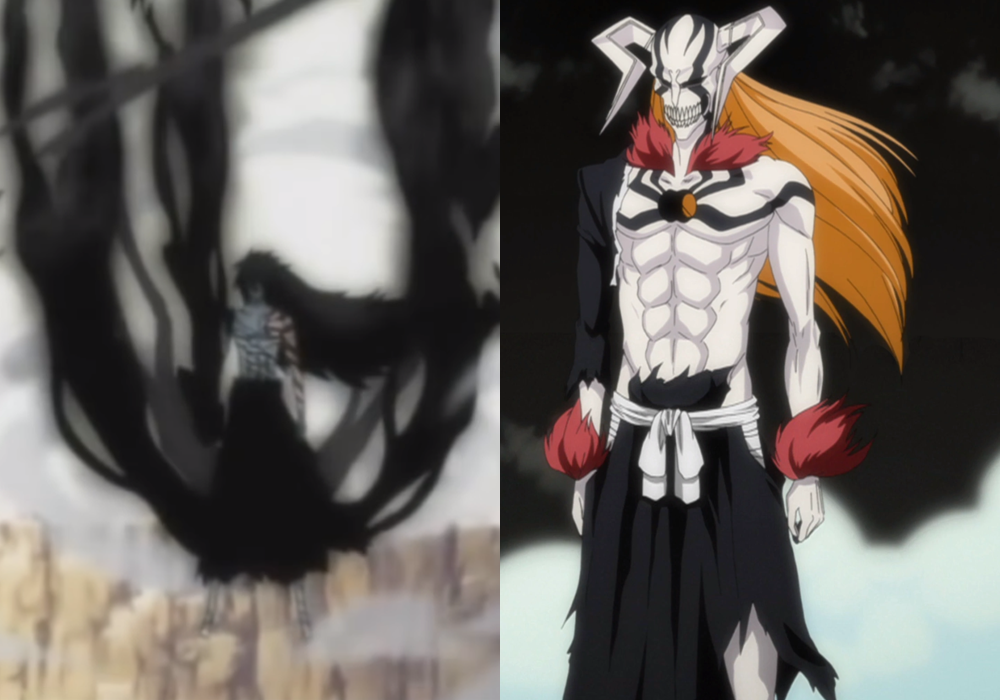 Ichigo is full of potential. Shinigami, Hollow, Arrancar, Quincy, a bleached strawberry – he seems to be all of that.

So it comes as no surprise that he gets a few transformations in the story. Two of the most memorable ones are his Hollow Form and Saigo no Getsuga Tensho.

His Hollow Form was activated when Ulquiorra fatally blasts him on his chest.

He hears Orihime’s cries and comes back in this wild and powered up version of himself.

He shows his Saigo no Getsuga Tensho during his final fight with Aizen. In this form, his hair grows long and turns black! 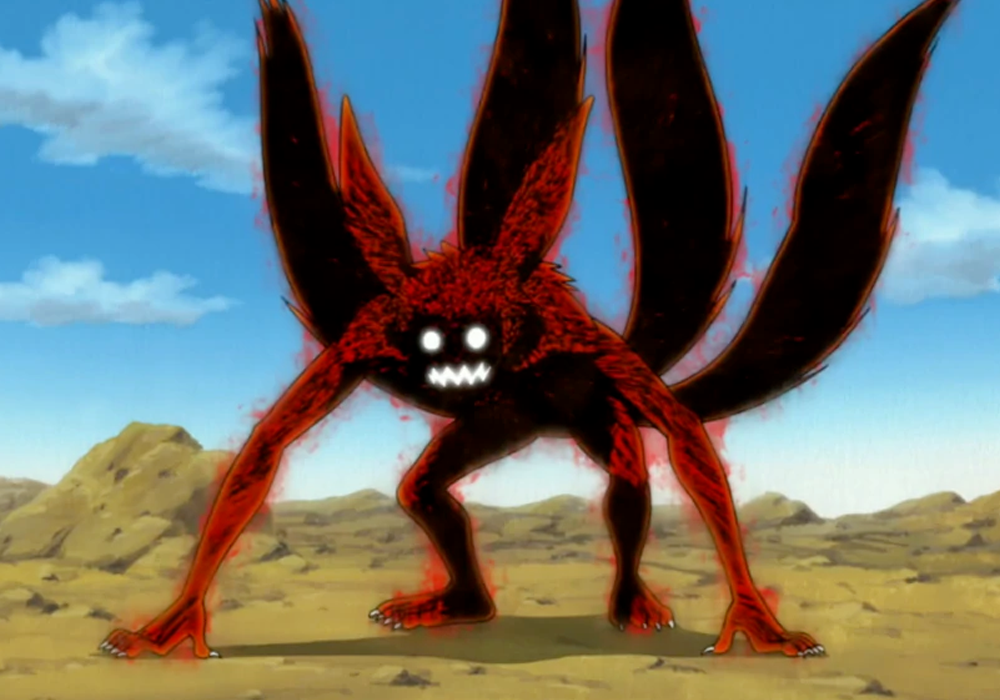 Those with Tailed Beasts in them can utilize the beast’s powers and transform.

There are multiple Tailed Beasts in the show, but the one we see the most and arguably the most popular is Naruto’s Nine-tailed Fox.

Throughout the story, Naruto slowly gains more attributes of this beast and morphs into it. In the initial forms, he only gets slight changes, like his eyes.

Later, you see more and more traits of the beast! 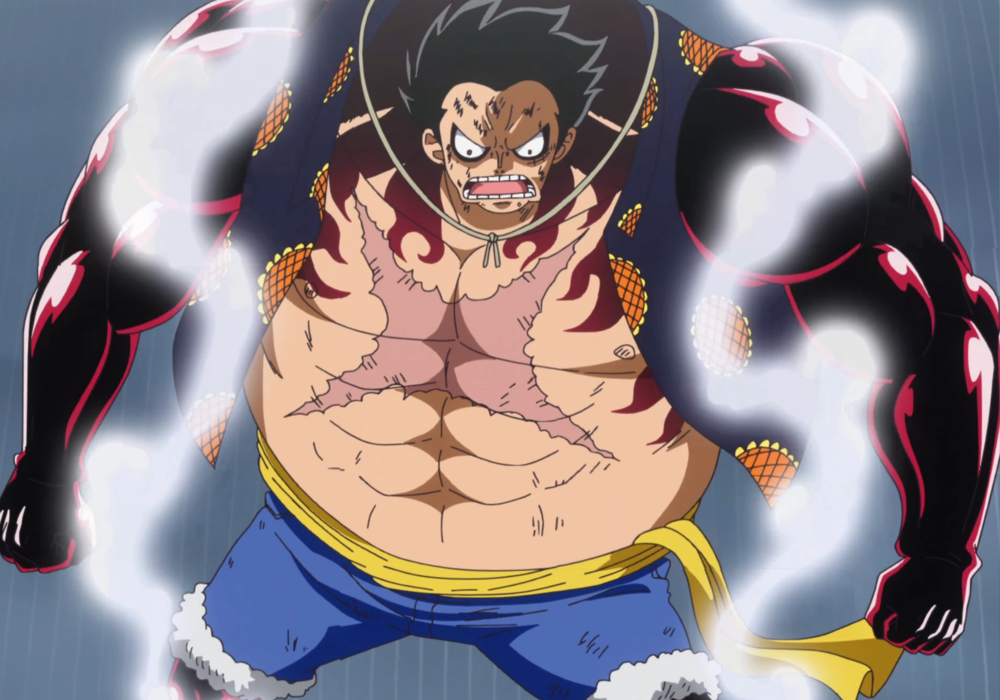 With a little creativity and training from him, he has transformed his simple rubber-like punches into flexible powers fitting for a pirate king.

In the anime, he’s currently at Gear 4. Just like his previous Gears, he inflates his arms but not before coating them with Busoshoku Haki!

The body parts with this coating harden and turn black.

We’ll see what he has in store for us in Gear 5! 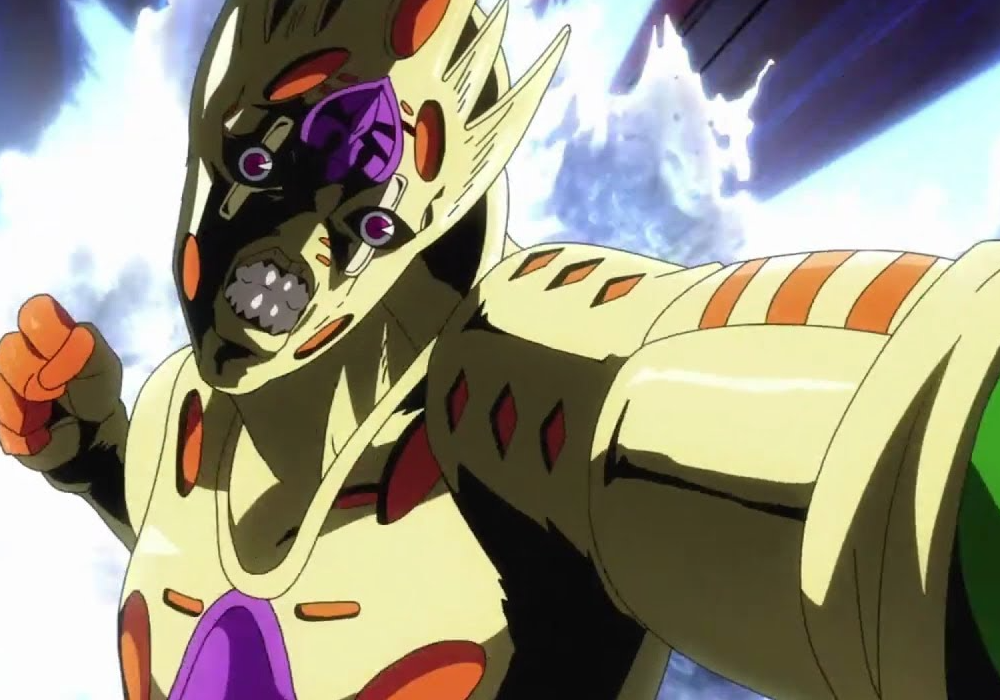 Stands are magnificent beings as is, but it turns out they can turn into a grander version of themselves using a particular item.

With a Stand Arrow, a Stand or a Stand User gets an upgrade. Stands learn new abilities and change their form.

If you’re not a Stand User, the Arrow can kill you or awaken your Stand instead. Would you like to take that chance?

It’s not known why this artifact can do such things. Because it’s made using material with an extraterrestrial origin, our best guess right now is aliens. 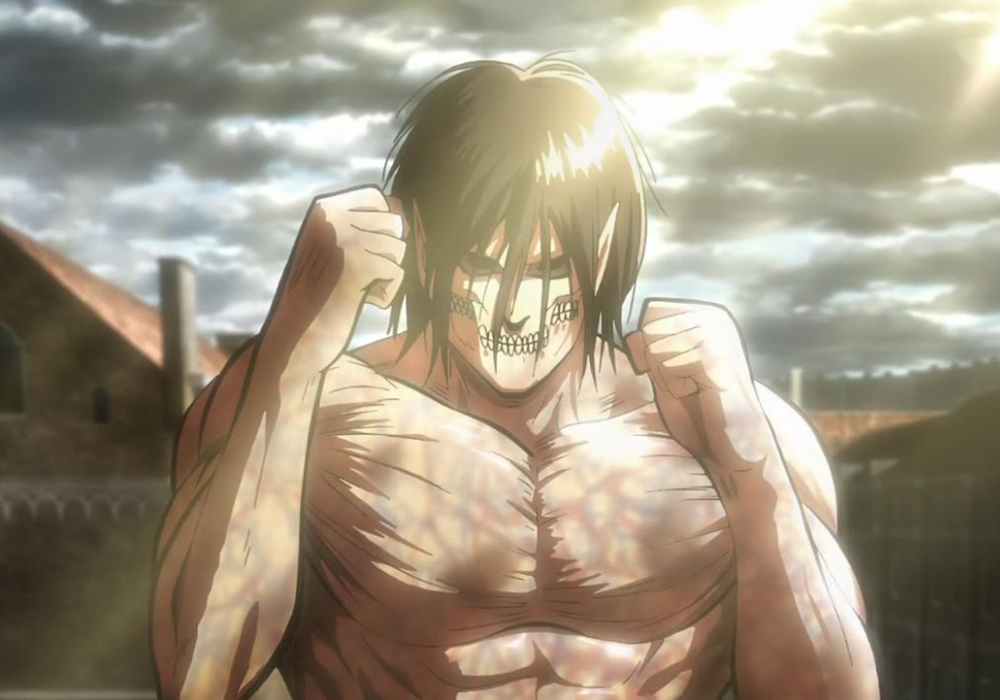 In the world of Attack on Titan, some people can turn into massive, aggressive, and powerful beings called Titans.

They’re definitely scary, but the way they transform is jaw-dropping, terrifying, and amazing.

Some kind of energy or lightning zaps all around, heat and steam gets released, and flesh gets rapidly made! 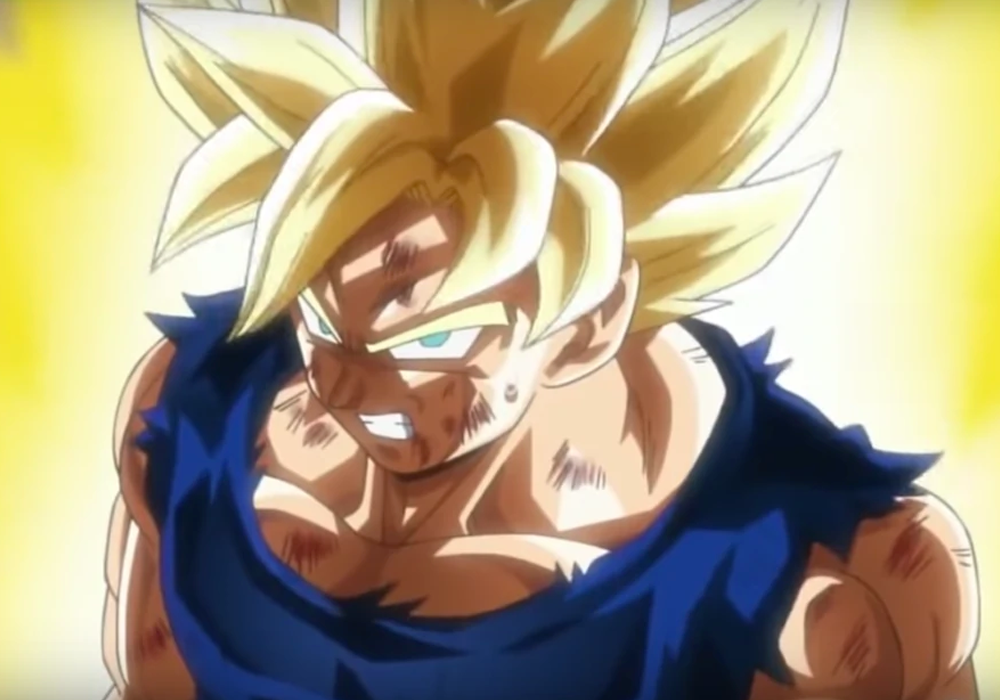 Where were you when you first saw Goku turn into a Super Saiyan? If you were like me, you were probably at the edge of your seat freaking out!

Dragonball’s Super Saiyan form is a classic when it comes to anime transformations.

Not only did it effectively telegraph that the character was getting a mind-blowing power upgrade, but it also animated it in such a dramatic way.

Drastic hair change? Electricity zapping around? Strong aura pulsing around the character? These are core memories for a lot of old anime fans. 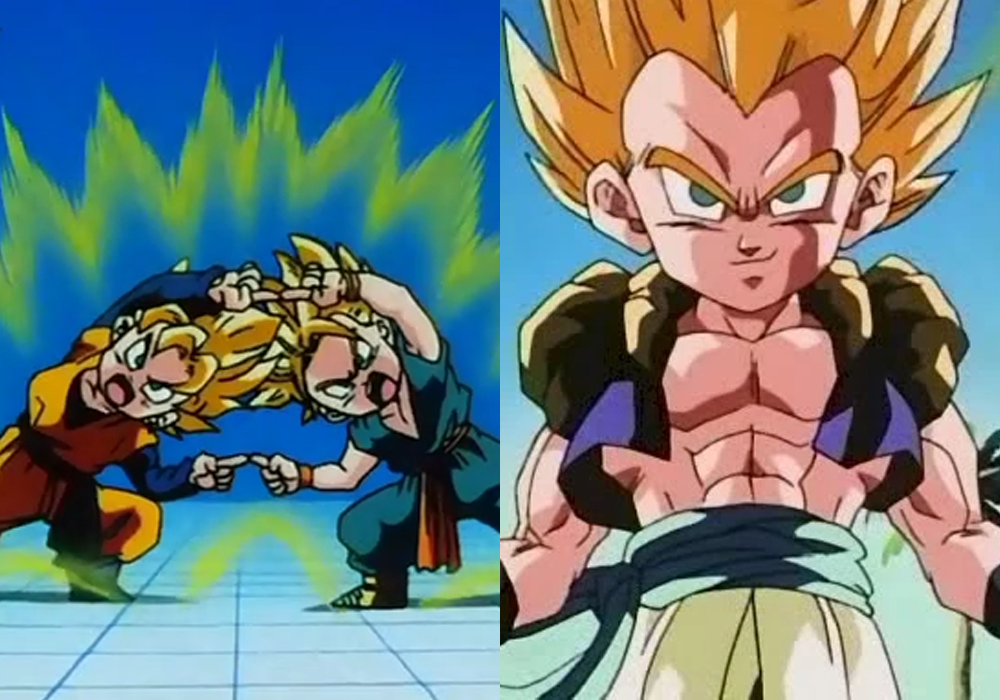 Later in the story, it introduced another shocking anime transformation – Fusion!

Two characters fuse together into one being. Depending on how this new being is formed, the name varies.

For example, when Gogeta was first formed, it wasn’t quite right and was called Veku. 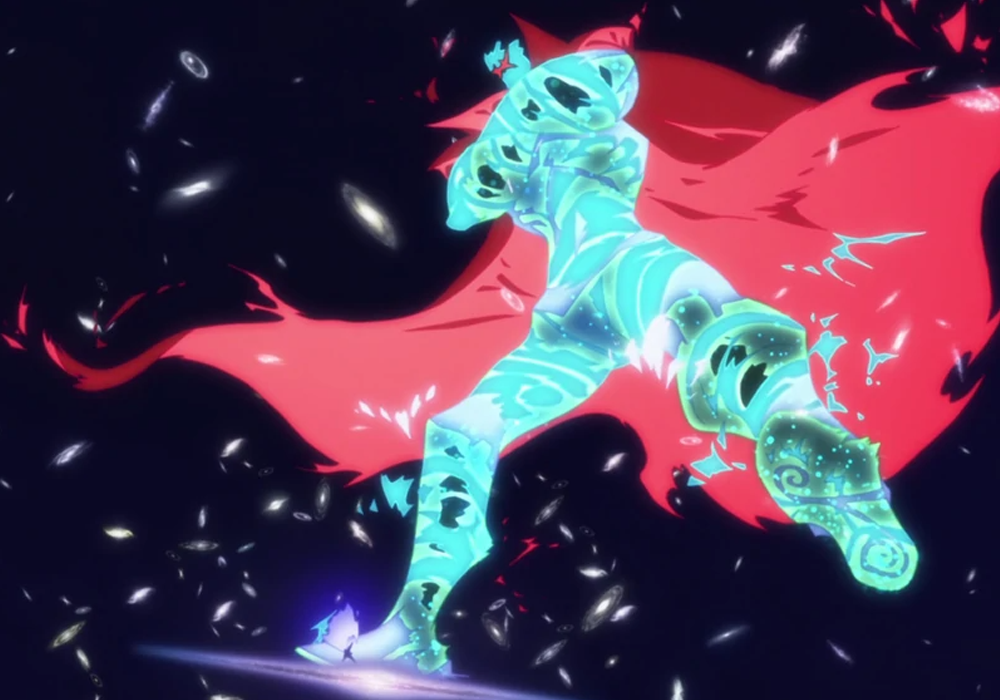 During the final fight against the Anti-Spiral, our titular mecha gets its final form. And boy, is it quite hype like the show itself!

It’s absolutely massive, gaining a universe or multiverses in its body. It is noted that it’s larger than the observable universe we have now. That is insane.

A show like Tengen Toppa Gurren Lagann can only end this way, and we’re all for it. 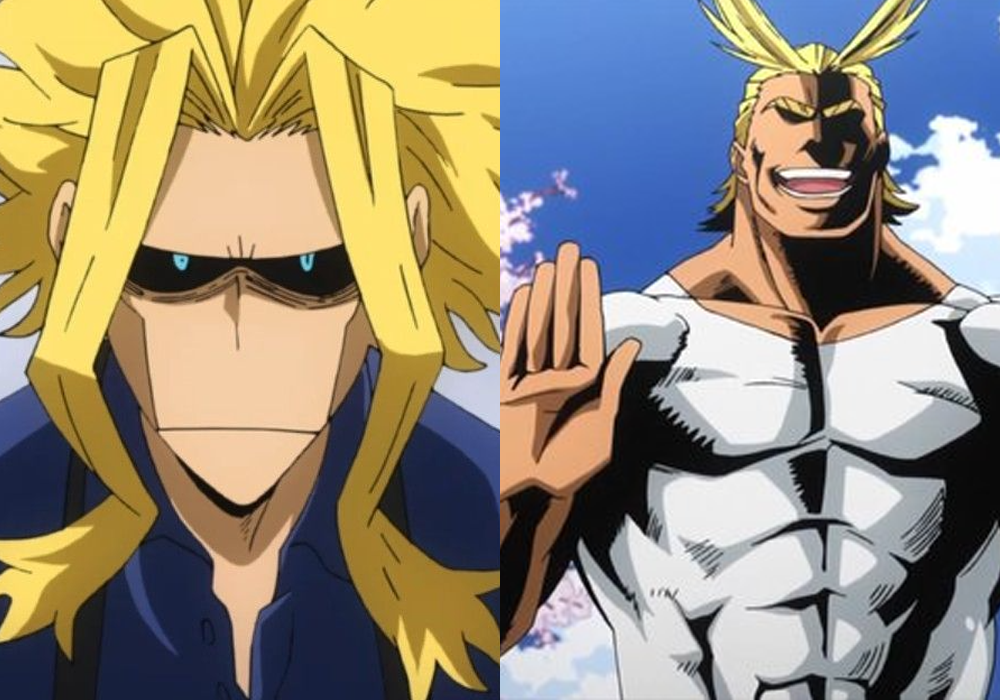 Due to his injuries, All Might can only maintain his musclebound form for short periods.

One second, you’ll see him in his current scrawny form. But when duty calls, he instantly flexes his gains!

So why does he painstakingly maintain this muscle form when he can barely transform into it anymore? Well, he symbolizes hope.

He knows this and is willing to sacrifice himself for the people. 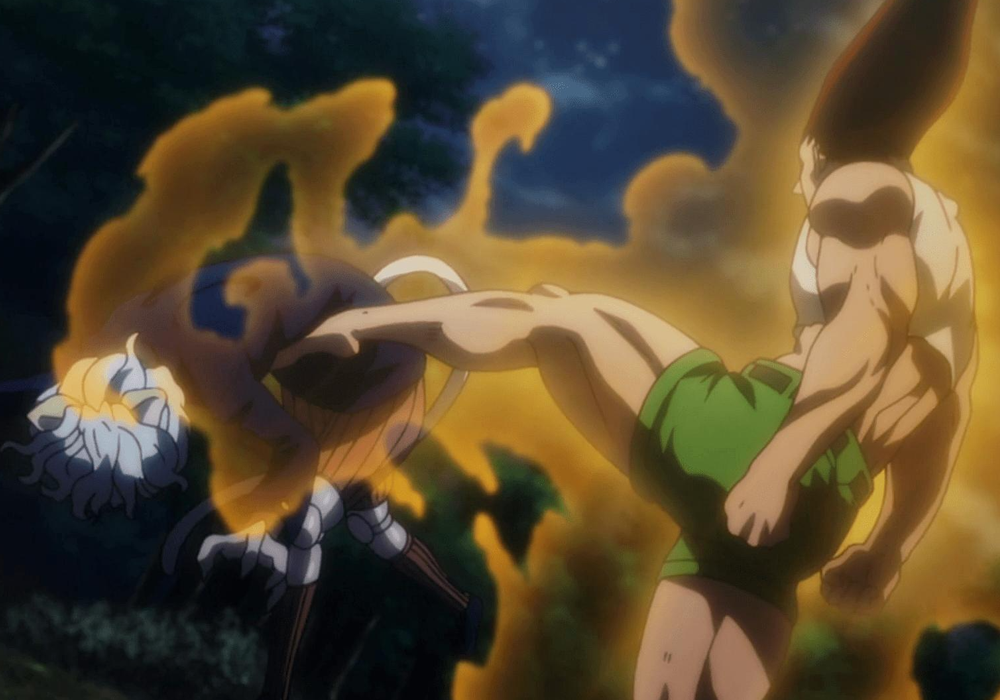 We’ve featured Gon’s transformation numerous times already, but we can’t help but include it in a lot of lists because of how iconic, unforgettable, and jaw-dropping this moment is.

Upon knowing that someone dear to him is dead because of him, Gon loses it. Something in him just breaks, and all hell breaks loose, so to speak.

This transformation sacrifices all his Nen and future potential and puts him in a fatal situation.

But while it was all happening, Gon simply didn’t care.

It was a “you killed him, I’ll kill you” moment, and it was frightening.