Oversized heads with big eyes attached to tiny bodies can’t fit all their angst, antics, and eccentric characters. With their quirks to the max, these chibi parodies give their spin-offs a new and hilarious look.

Following the more mundane and slice-of-life leave the characters’ larger-than-life personalities’ front and center. The chibi-style brings a cartoonish look to their stories while poking fun of themselves and acting as their own snowball effects to their wacky situations—the best of the best chibi, laughs, and misadventures. 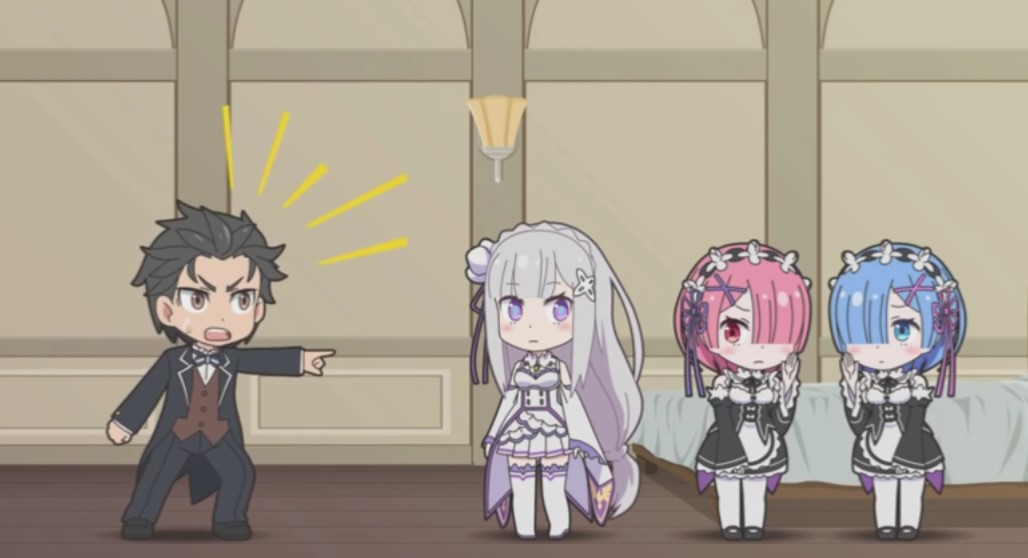 Comedic shorts that follow all the fun yet abnormal characters from Re:Zero ~Starting Life in Another World~. Full of missed scenes from the web novel and interactions with characters unseen in the original series.

Subaru Natsuki as a butler back at the mansion, in the forest with the Oni maid twins, or in the Sanctuary with his love, Emilia, and beast boy, Garfiel. This chibi series brings nothing but heartwarming scenes alongside witty quips.

Kasumi and the rest of her friends have fun together day-to-day as they juggle their mishaps while trying to have band practice and prepare for concerts. None of the chibi girls fail to be adorable and cause lots of trouble for each other. 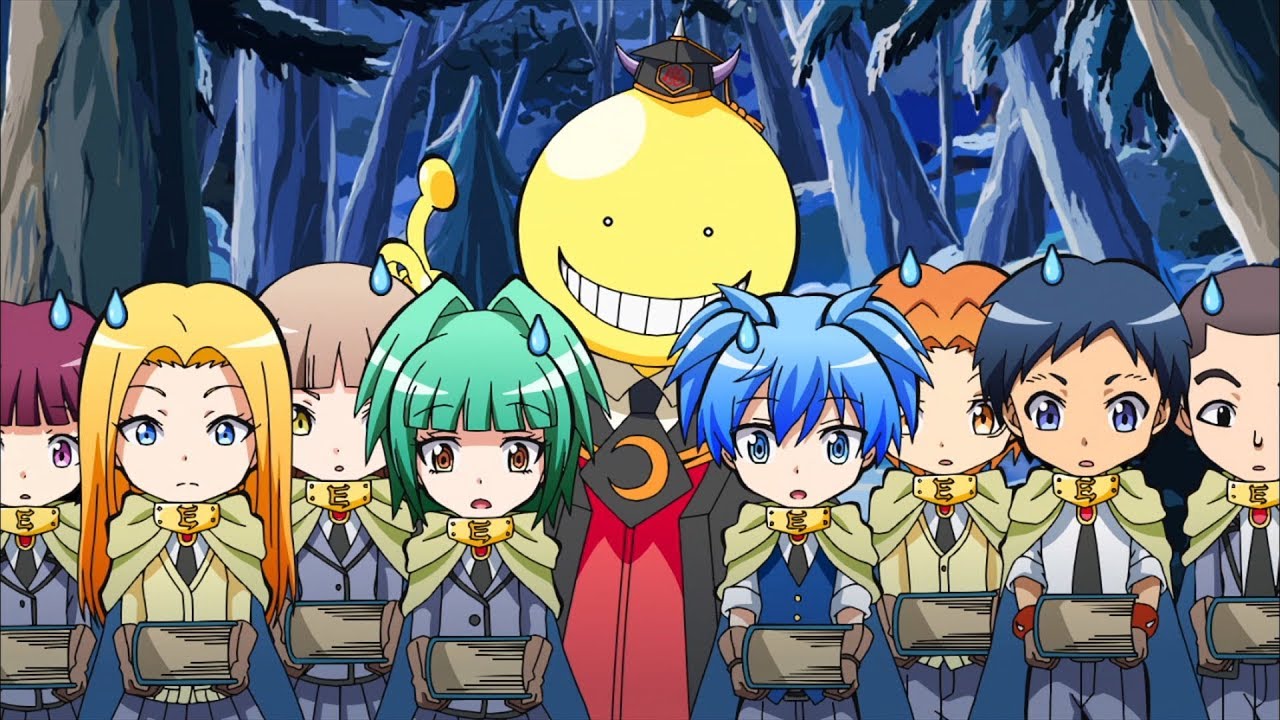 From Assassination Classroom, chibi Nagisa Shiota and his class of 3-E still need to try to kill their teacher, Koro-sensei, but now they are in a magic school and are trying to kill the Demon King Koro-sensei.

Instead of knives and cunning, they are armed with magic and swords. To succeed, Nagisa and classmates much track down the three powerful monster warriors while trying to handle the amusing and comical situations set up by their Demon King teacher.

A spin-off of Baka and Test: Summon the Beasts, all the characters back and upgraded to chibis! The cute and stumpy baka (idiot), Akihisa Yoshii, returns with all his oddball friends and the angst that follows them.

Still stuck in the school that divides students based on their academic score is, somehow, the least of his concerns regarding his classmates’ shenanigans. It will either strengthen their bonds or make Akihisa question his sanity. 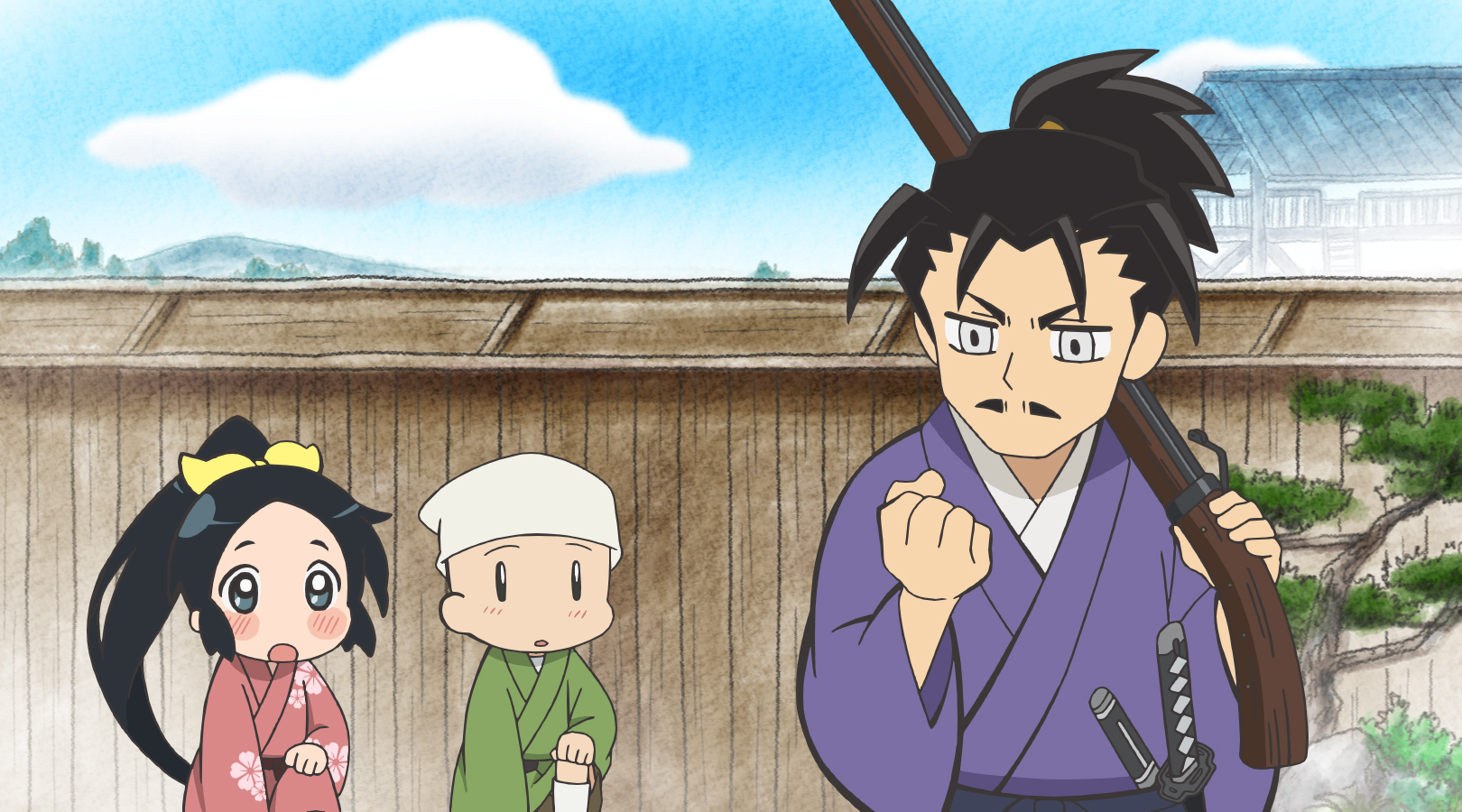 When the adorable and equally clumsy Chidori almost drowns, she vows to serve the man who saved her life with all the strength and sharpened skills as a ninja. Years later, she finally meets her savior, Nobunaga Oda, and is finally able to repay her debt and serve under him.

There’s only one small problem: the kind chibi man who saved her life is a warlord! Chidori will have her hands full, helping him in to take care of invading enemies and conquer adjoining lands. 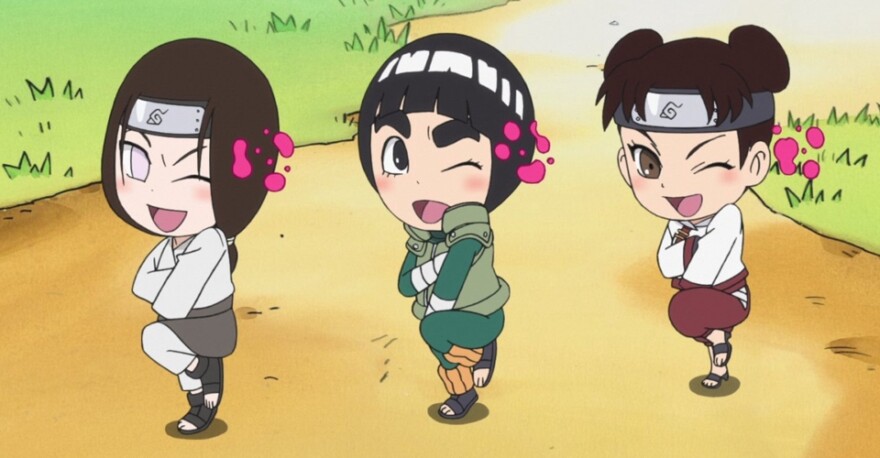 From the show Naruto, the chibi series does not follow Naruto Uzumaki of the Nine-Tailed Fox, but the one and only ninja Rock Lee! What he lacks in ninjutsu and more than makes up for in strength and spirit, as does all his friends in the Hidden Leaf Village.

With his mentor, Guy, and his teammates, Neji and Tenten, Rock Lee and Team Guy complete missions and get caught up in hilarious adventures.

9. The Melancholy of Haruhi-chan Suzumiya 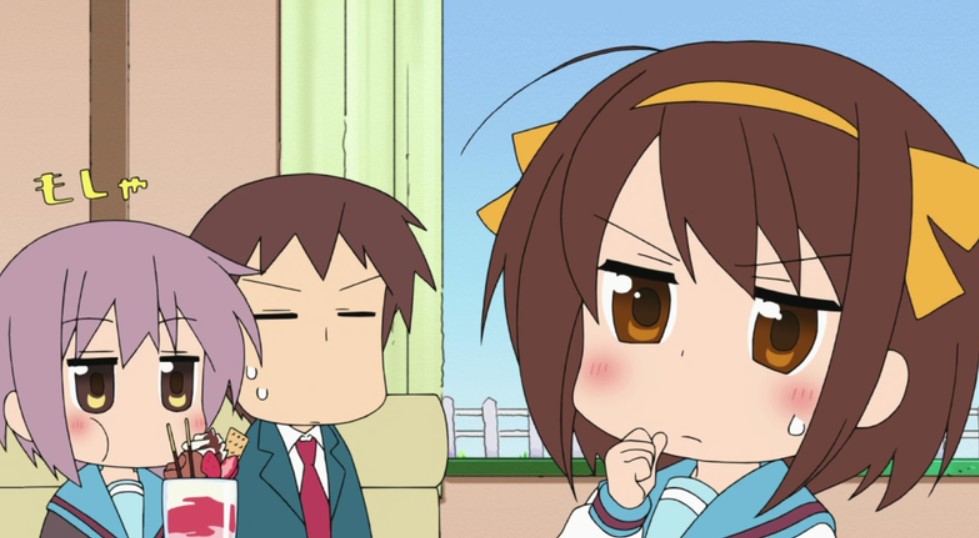 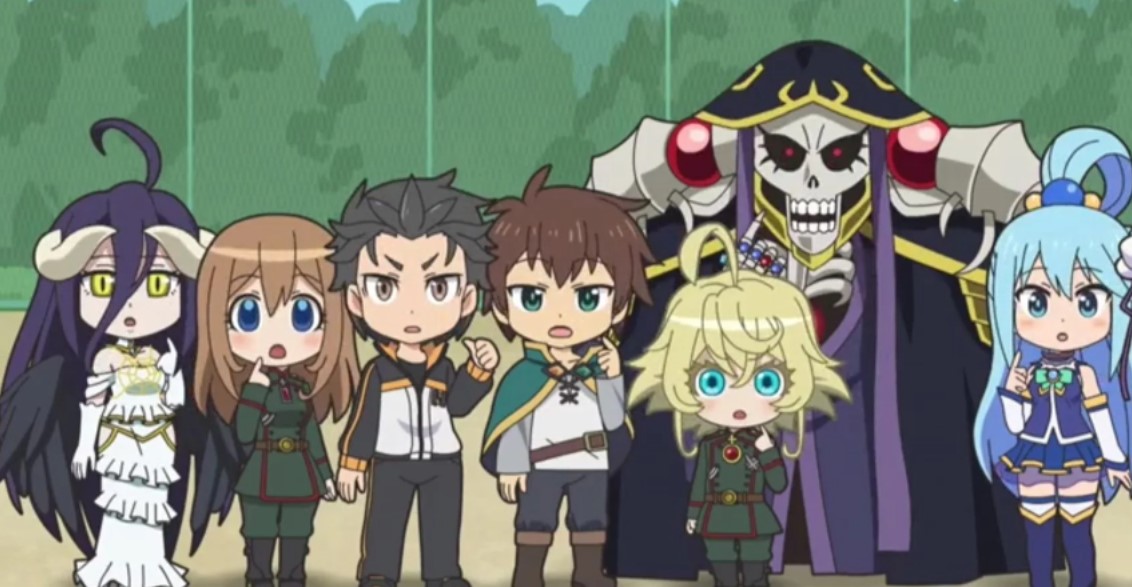 A collaboration of fan-favorite isekai series as chibis! Kazuma Sato from Konosuba, Subaru Natsuki from Re:Zero, Ainz Ooal Gown from Overlord, and Tanya Degurechaff from The Saga of Tanya the Evil. They are all presented with a big red button that teleports them and their allies to another world where they begin to live normal school lives.

What could be better than the best of isekai jammed together under the same school roof? Answer: more fun, more laughs, and much more chibi than their own original series! 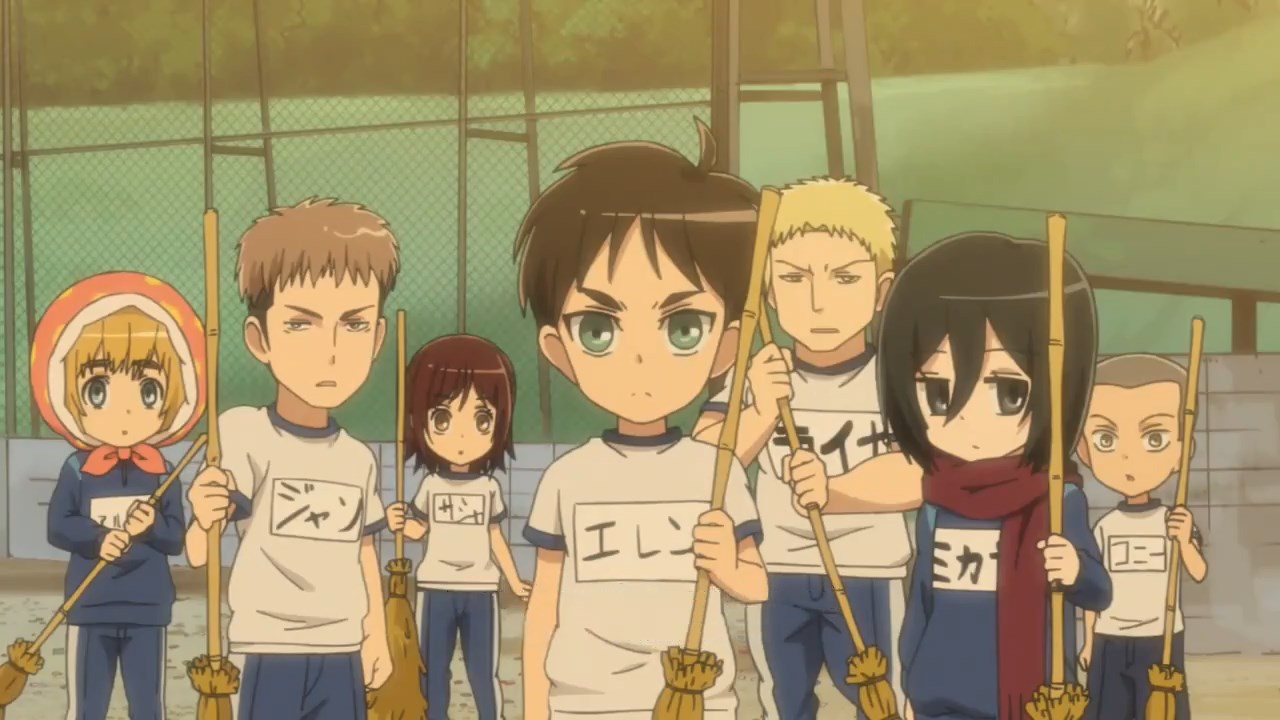 Even in a chibi universe, close friends Eren Yeager, Mikasa Ackerman, and Armin Arlert still have to face titans that threaten their world. In Eren’s first year of junior high school, a titan appears to ruin everything.

The titan steals his lunch! Eren will do everything in his power to get it back and vows to destroy every last titan. With his friends by his side, they become members of Titan Junior High’s Wall Cleanup Club! 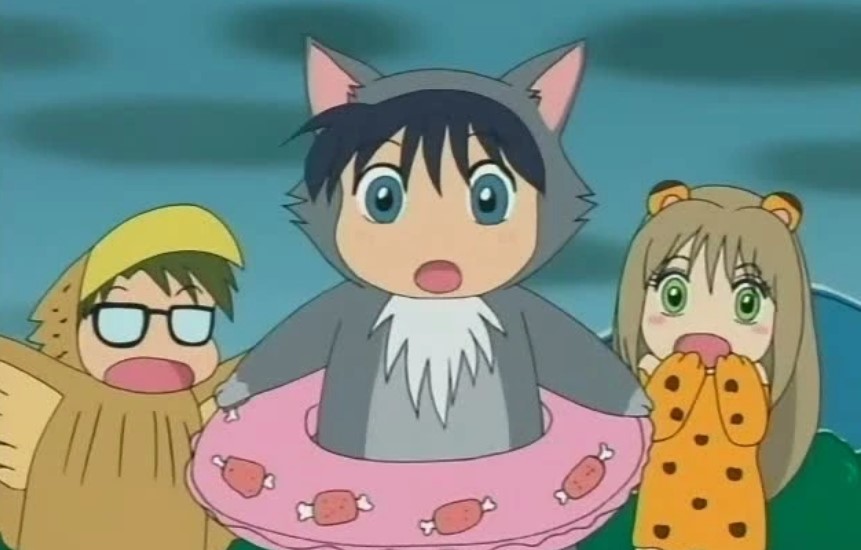 Uruno, a useless chibi wolf that finds a new home in a useless forest surrounded by useless chibi animals that don’t live up to their animal stereotypes. An impure unicorn who craves a glass of sake, a traveling saleswoman bear, and a near-sighted eagle. Uruno quickly makes a bad first impression with the rabbit, Usahara. He is not cute or cuddly, more ill-tempered, quick to pick a fight, and isn’t seen without a cigarette between his paws.

The rabbit makes Uruno want to leave, but Chiiko, the sweet yet clumsy cheetah, makes him stay when he falls head over paws for her. This useless wolf hopes to turn the forest into a home and become better friends with the weird creatures that dwell in it. Including Usahara. 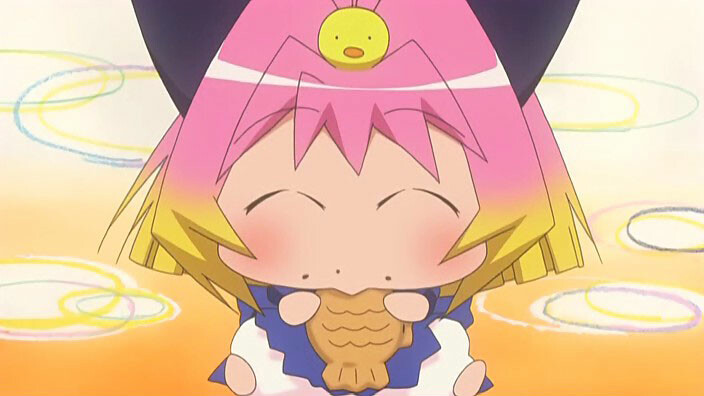 One normal morning, junior high student, Sunao Moriyama, finds a chibi creature inside his refrigerator. He names her Potemayo and decides to take her to school with him, and she is happy to tag along on the top of his head. Because of Potemayo, Sunao quickly becomes the center of attention with his classmates.

A bonus, the girls in his class. This seems like a dream come true until his classmate, Kyo Takamimori, finds a similar creature in his refrigerator and names her Guchuko, and Guchuko hates Potemayo. Lucky for her, the feeling is mutual. Not so lucky for Sunao. 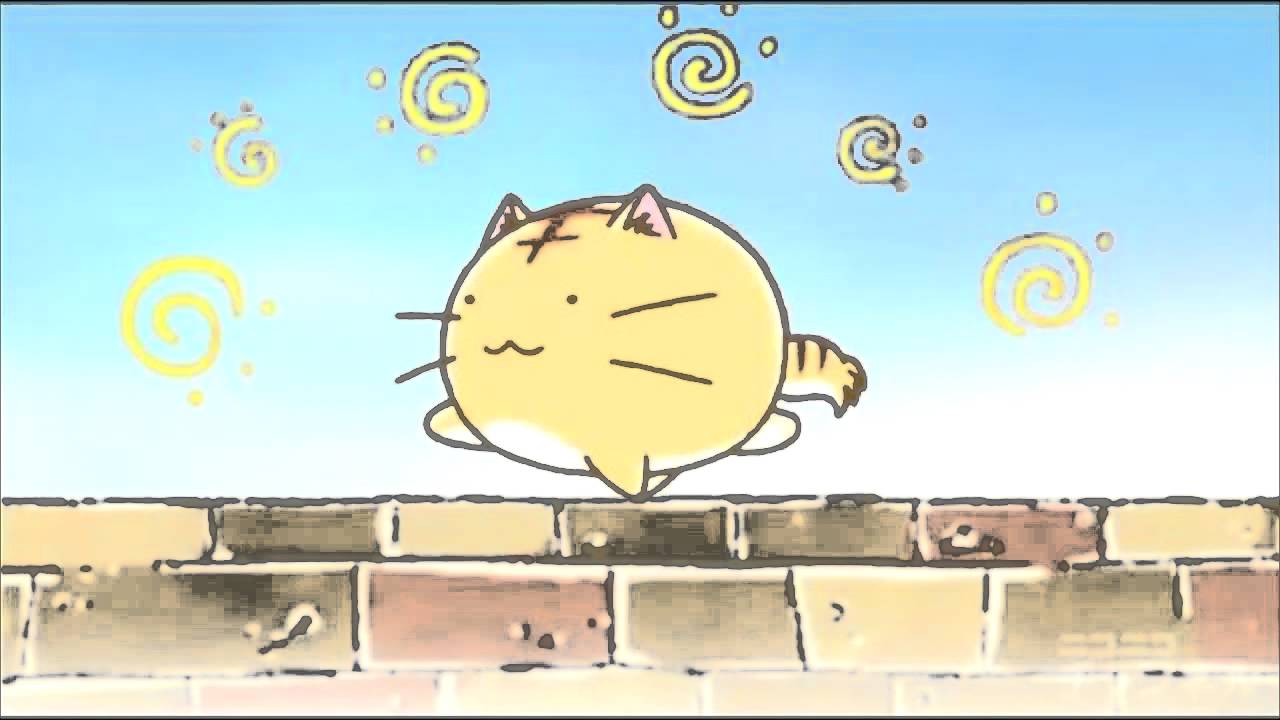 A 22-year-old lady named Moe Sato finds a strange orange-colored cat that is shaped like a ball. She decides to name him Poyo and bring him home to her father, Shigeru, and 17-year-old younger brother, Hide.

This chibi slice-of-life follows Poyo and the Sato Family as he tries to win Hide and become a true member of the family. The round cat makes their holidays, sunny days, and rainy days all the more fun and all the cute!

This chibi series follows four high school girls and their close and funny-loving friendship. The polite and intelligent Miyuki Takara and the sweet and spice of Tsukasa and Kagami Hiiragi twins stand alongside their best friend and main character, Konata Izumi.

She is the slothful otaku who spends her days watching anime and reading manga. Together, they journey through the hilarious way they look at the world as well as taking a closer look at otaku culture and school life through their big chibi eyes.

2. The Founder of Diabolism Q

Mo Da Zu Shi‘s spin-off follows the troublemaker Wei Wuxian and the cold and serious Lan Wangii chibi-style. To learn more about the spiritual world, demons, and other beings like ghosts, Wei and Lan begin their studies in cultivation classes.

Lan tries to do everything by the book while Wei couldn’t care less, loves getting into trouble, and distracting Lan. Even in this chibi spin-off series, the bond between Wei and Lan is amusing and lovable that recreates their friendship. 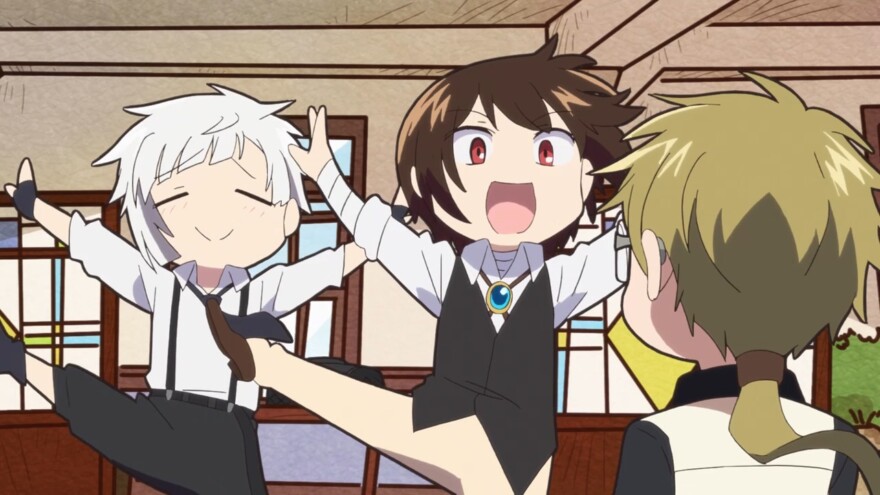 The spin-off of Bungo Stray Dogs back in chibi fashion! Atsushi Nakajima in the Armed Detective Agency versus Ryunosuke Akutagawa of the Port Mafia and their random and crazy antics around Yokohama cause them and their members to clash.

From swapping bodies to entering a dance contest, the weird situations allow all the characters’ quirks to be in the spotlight. Dazai is still excited about ways to commit suicide, Akutagawa is desperate to prove himself worthy to his former mentor, and Chuuya is still short-tempered and short as ever (don’t tell him that).