Green-haired anime characters are usually one of the most respectable characters in their series. To be fair, it’s hard to be green and not stick out.

There are so many cool and amazing anime characters that rock green hair from dark to bright lime, and here are some of the best! 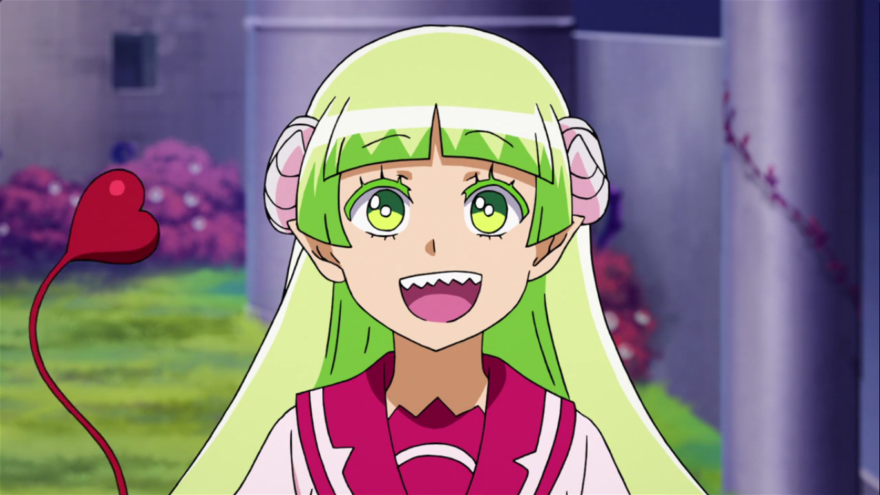 A deuteragonist of Welcome to Demon School! Iruma-kun, Clara is a demon, and one of the first friends with Iruma Suzuki makes.

Clara is an energetic, quirky, and weird girl who makes a name for herself as one of the strangest students.

Clara becomes one of Iruma’s classmates when his parents sell him to a demon! Luckily the demon Sullivan treats him like a grandson, taking care of him and having him go to Babyls, the demon school.

Being the only human, Iruma will try to keep a low profile—unsuccessfully. 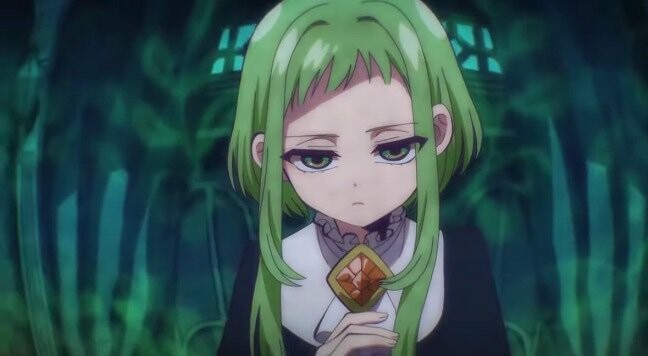 One of the antagonists of Toilet-bound Hanako-kun, Nanamine, is a third-year student at Kamome Academy and member of the Broadcasting Club.

After making a contract with the apparition Tsukasa, she is forced to be his assistant.

She is a very aloof and deadpan girl who treats Nene Yashiro kindly while being more abusive and blunt to anyone else.

Like Nanamine, Yashiro soon discovers the world of apparitions at their school when she makes a deal with one of the school’s Seven Wonders: Hanako. 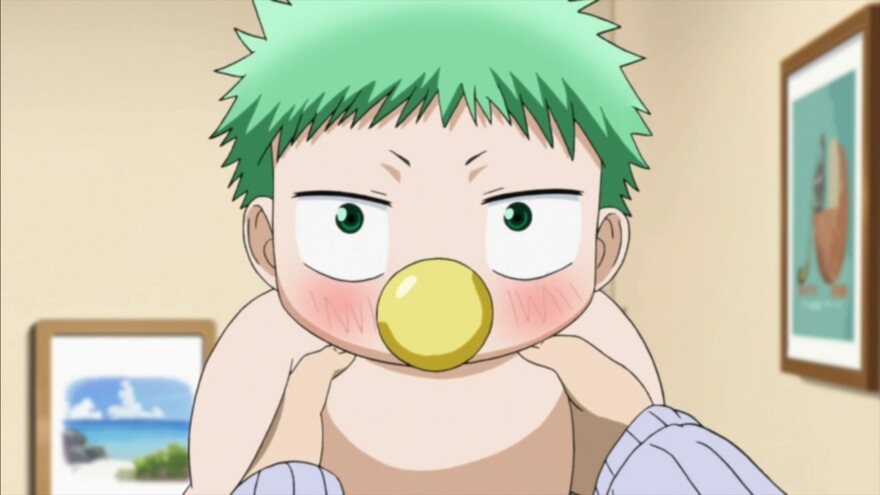 Beelzebub from the series of the same name is Kaiser de Emperana Beelzebub IV, the baby son of Beelzebub III.

A bit of a crybaby (of course), Baby Beel is easily impressed and naïve infant who also has his own proud, but gets shy around girls and is scared of insects.

So he can one day destroy humanity, Baby Beel is sent to the Human World but ends up bolding to high schooler Tatsumi Oga who adopts him. 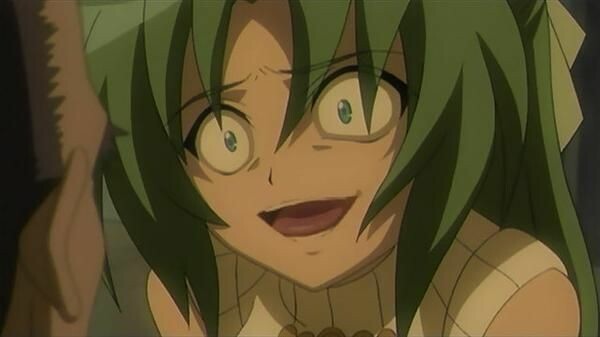 One of the main female characters and antagonists in Higurashi – When They Cry, Shion is the older twin sister of Mion and is known for being more refined and girly than her sister.

Despite her sweet and kind looks, Shion is actually very manipulative but hides behind her cheerful façade.

Keiichi Maebara moves to Shion small town and becomes quick friends with her and her sister.

But when he discovers the strings of murder and disappearances that haunt the town, Shion and Mion might be hiding a twisted connection to it all. 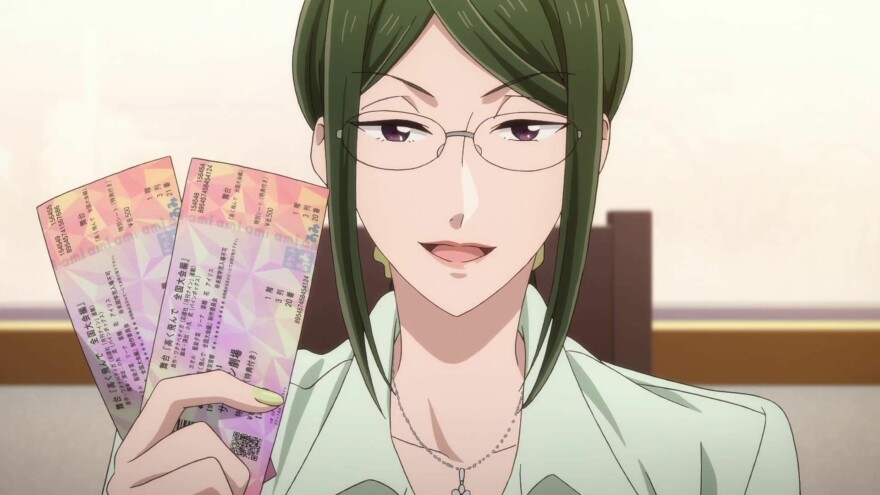 One of the main characters in Wotakoi: Love is Hard for Otaku, Hanako is an office worker alongside Narumi Momose, Hirotaka Nifuji, and her boyfriend, Taro Kabakura. Secretly, Hanako is a famous cosplayer and is a big fan of videogame and BL!

Narumi always had to hide her otaku side too. After her boyfriend broke up with her after finding out, Narumi is ready for a new start at a new office where she reunites with her childhood friend Hirotaka—the only one who knows her otaku secret!

Hirotaka makes a deal with her: he’ll hide her secret if she becomes his girlfriend! 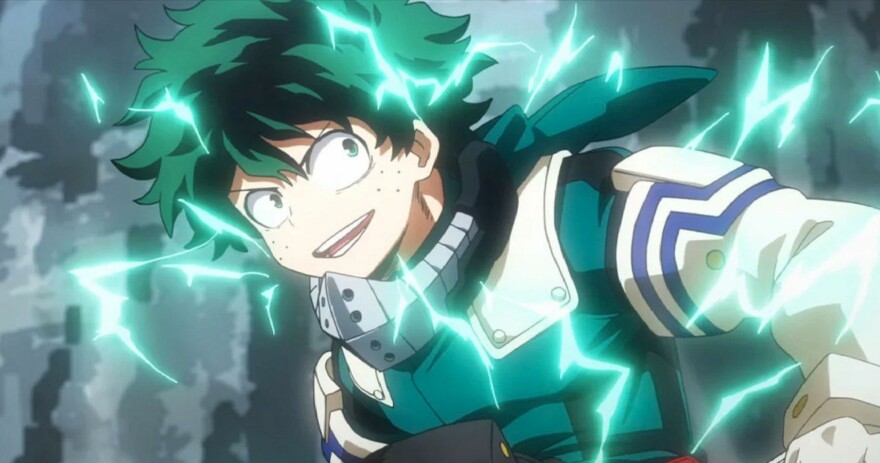 The main character of My Hero Academia, Midoriya, dreams of becoming a Pro Hero. Unfortunately, he wasn’t born with a Quirk (superpower).

However, despite his timid and polite nature, Midoriya is book smart, diligent, and determined to one day become a hero!

Everything changes for Midoriya when he meets All Might, the No. 1 Pro Hero, who gives Midoriya the chance to become a hero at U.A. High School—by taking his Quirk! 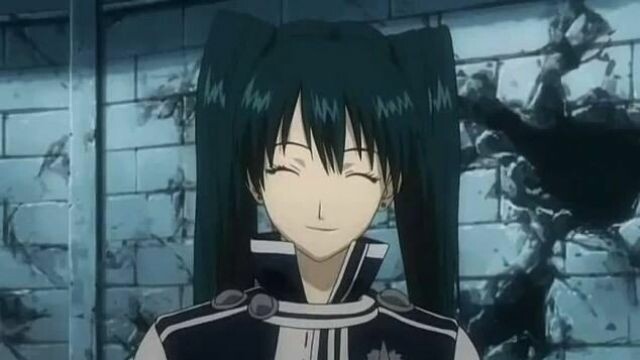 One of the main characters in D.Gray-man, Lenalee, is an exorcist and is a part of the Black Order.

She is a very kind and friendly girl who deeply cares about her friends and thinks of them as family. One of her weaknesses is that she is quick to anger and doesn’t work well under pressure.

Lenalee works together with Allen Walker at the Black Order to fight against weapons called “Akuma”: powered by the souls of the dead that become trapped inside. 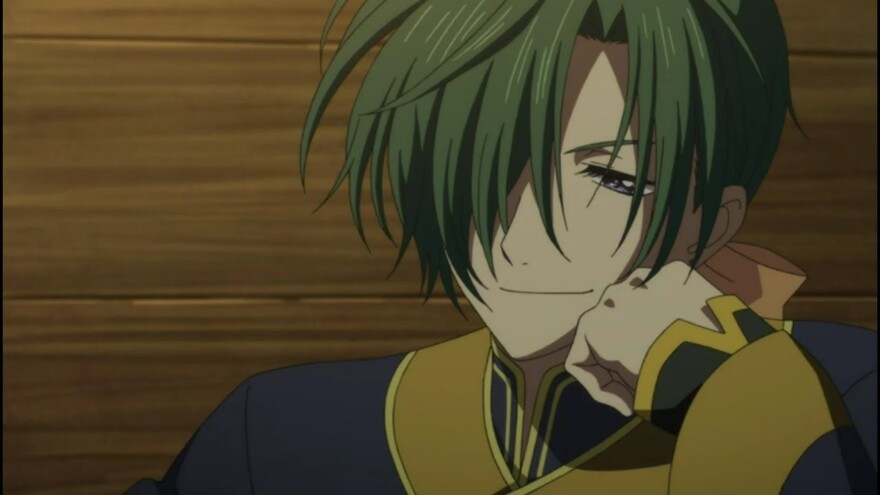 One of the main protagonists in Yona of the Dawn, Jae-Ha, is one of the four Dragon Warriors.

As the Green Dragon, he comes from the original green dragon deity with his power in his right leg, which gives them the unique ability to jump high and long distances.

Jae-Ha is a confident womanizer who enjoys beautiful things with a laidback and light-hearted attitude.

After her father, the king, was murdered, Princess Yona and her childhood friend Hak managed to escape.

To save her kingdom, Yona hopes to find the missing four Dragon Warriors who can fight back and take back the throne from her father’s killer! 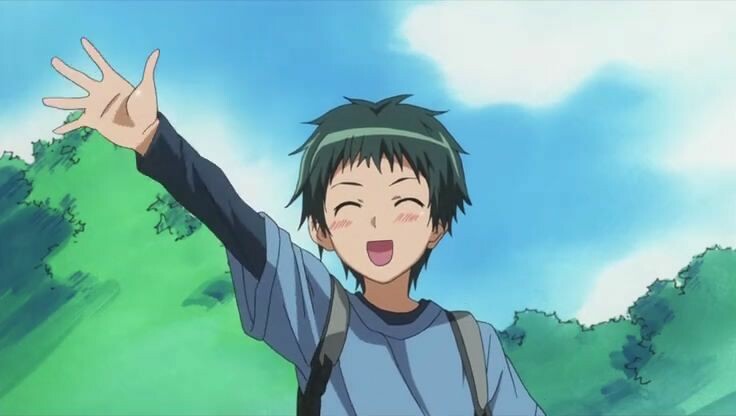 From Maid Sama! Yukimura is the vice president of the student council who council president Misaki Ayuzawa trusts when she’s away.

Although described as feminine or having a “girlish aura,” Yukimura is a hardworking and earnest guy who respects Misaki and tries his best to help out when he can.

In a school that recently allows girls, Misaki is surrounded by mostly guys and tries to keep them all in line.

However, if any one of them knew about her family debt and that she works at a maid café—Misaki’s reputation would be ruined! 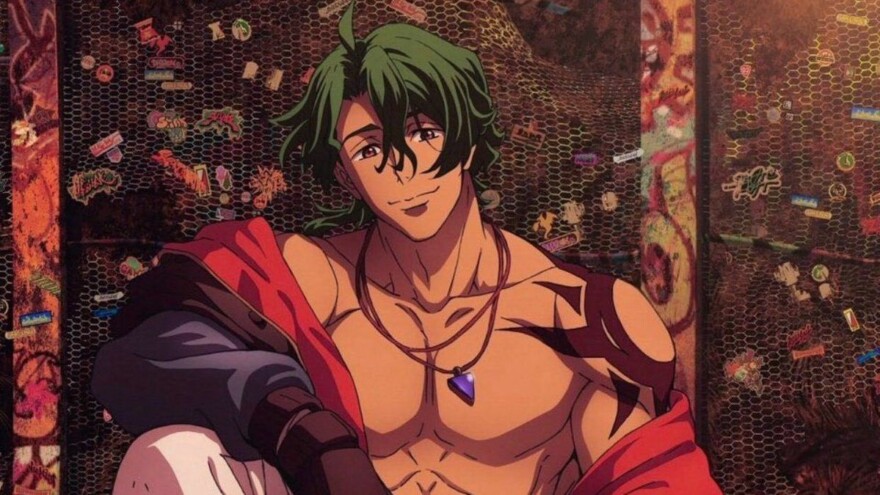 A character in SK8 the Infinity, by day Kojiro is a professional chef, but by night he is Joe, a skilled skater and a founding member of “S.” Joe is an open-minded and king guy, but is also a bit of a playboy—being flirtatious and loves having fun with women.

When it comes to his friend, he acts as the “papa bear” of the group and is always there to give the younger skaters advice.

Highschooler Reki Kyan is a skater who dreams of showing his worth at “S,” an illegal underground race where he takes his new friend Langa Hasegawa and shows him how to be a better skateboarder. 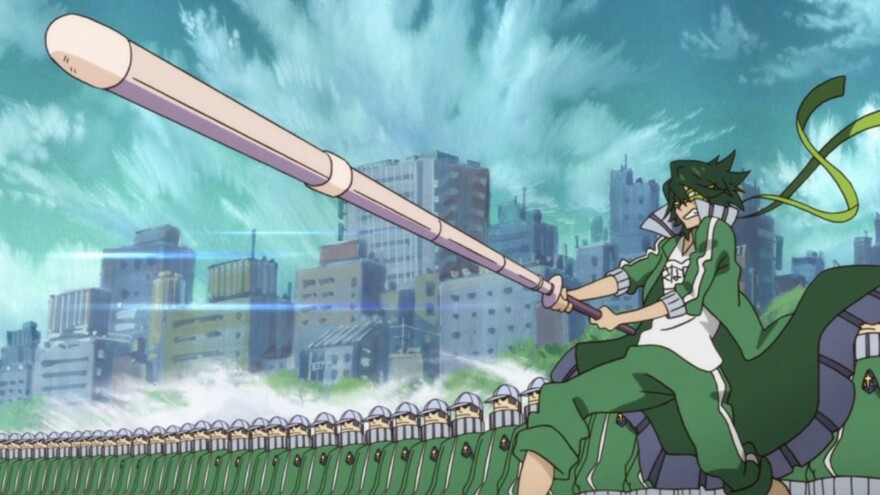 A member of the student council’s Elite Four at Honnouji Academy, Sanageyama, is in charge of the athletic clubs. He is known for his laidback and overconfident attitude.

She’s at Honnouji Academy to find the missing piece of her Scissor Blade that will belong to her father’s killer! 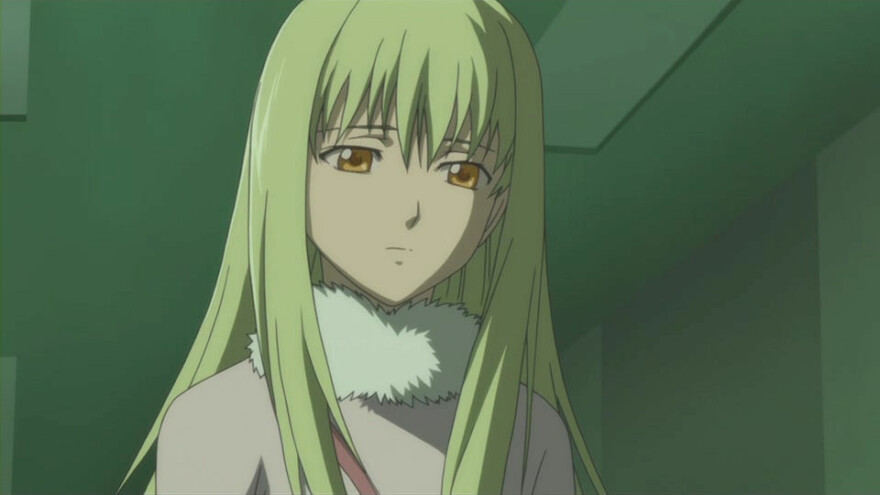 From Darker than Black, Amber is the very first known Contractor: beings who gain superhuman abilities from the Hell’s and Heaven’s Gate. She also has the power of Chronokinesis: the ability to control time.

Despite being a Contractor and a known traitor, she is a kind person who makes her own choices and protects who she cares about.

Ever since the Hell’s Gate appeared in Japan and the Heaven’s Gate in South America, people gain superhuman powers and become known as Contractors.

Chief Misaki Kirihara is at odds with Contractors and struggles with the choice of destroying them or saving them. 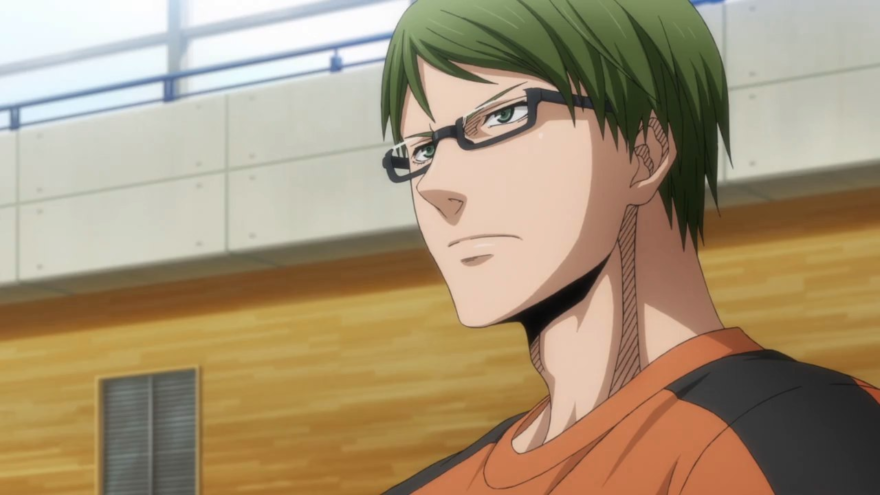 A character in Kuroko’s Basket, Midorima is a member of Shuutoku High School that serves as the Shooting Guard.

Often called a tsundere, Midorima is a reserved but rude guy with a strong determination for basketball—and horoscopes?

Midorima is at a rival school against Tetsuya Kuroko’s school Seirin High School.

Despite Kuroko being an ordinary basketball player, he and his team are determined become the best Japanese high school team! 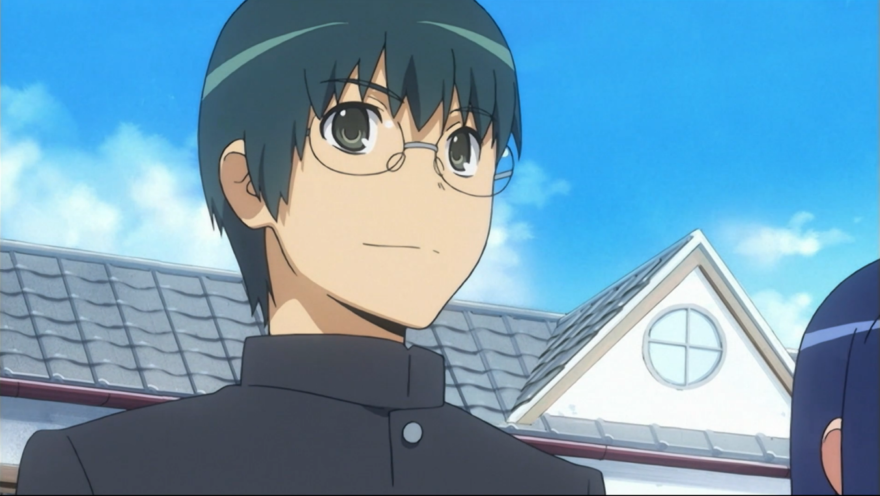 One of the main male protagonists in Toradora! Kitamura is vice president of the student council, captain of the boys’ softball team, and Ryuji Takasu’s best friend.

One of the few people that know Ryuji isn’t the scary and intimating person classmates think he is. Kitamura is popular with his class for being class representative for being diligent, thoughtful, and funny.

Unbeknownst to Kitamura, the school’s “Palmtop Tiger” Taiga Aisaka has a crush on him, and Ryuji is secretly helping her—if she helps him get together with her best friend! 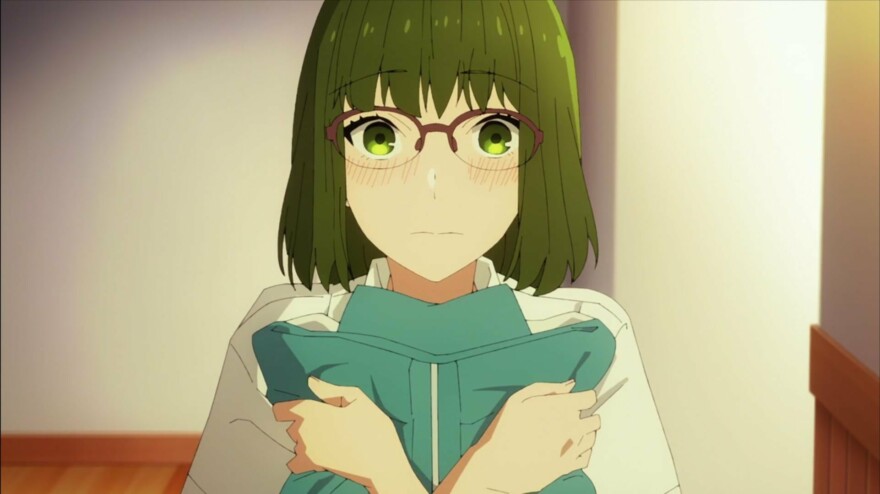 A character in Horimiya, Sakura, is vice president of the student council and known for having a one-sided crush on schoolmate Tooru Ishikawa.

She is a beautiful and kind girl who is also very hardworking and responsible but can also become shy and reserved, especially around Tooru.

Sakura is in the same school as Kyouko Hori and Izumi Miyamura, who never spoke a word to each other until they met outside of school, where they see their true selves.

This starts the beginning of a close friendship—or something more! 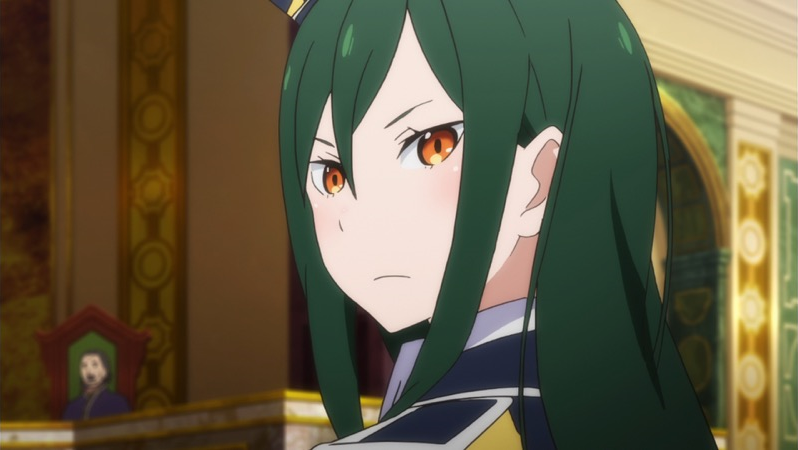 A supporting character in Re:ZERO ~Starting Life in Another World~, Crusch is the first candidate chosen to become the 42nd King of Lugnica.

She is highly respected by everyone she meets for her serious and calm nature as well as her strong sense of sincerity and justice.

When Subaru Natsuki gets suddenly teleported to her world, she is one of many powerful and eccentric characters he will meet as he help his love Emilia try to become the new king.

When faced with death, Subaru also has his secret weapon of “Return by Death,” but at the price of all the memories of his past, the trauma that could destroy him and the whole kingdom of Lugnica. 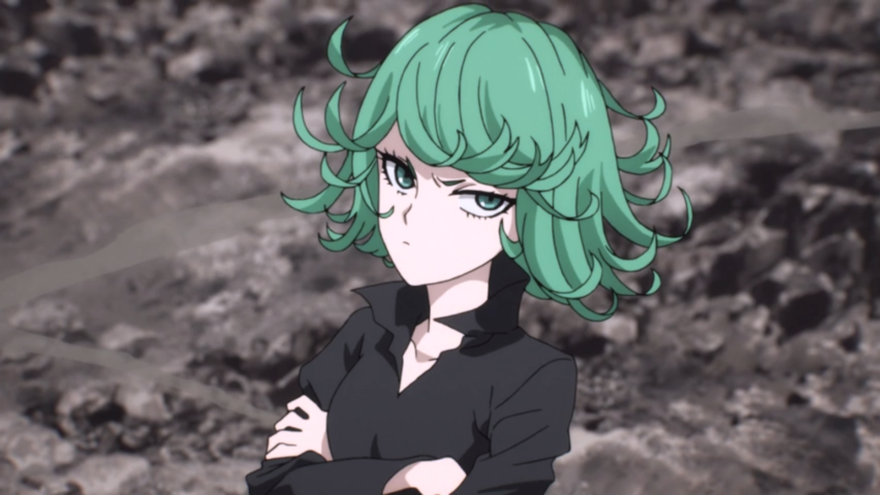 A supporting character in One Punch Man, Tatsumaki is a hero known as Tornado of Terror. She is an esper alongside her sister and is known as the S-Class Rank 2 professional hero.

Tatsumaki has a very arrogant personality and is best known for being moody, hot-tempered, and looking down on normal people.

Tatsumaki is one of many in a world of heroes, but none are as powerful as Saitama, who can defeat any evil villain with a single punch! However, with great power comes great boredom… 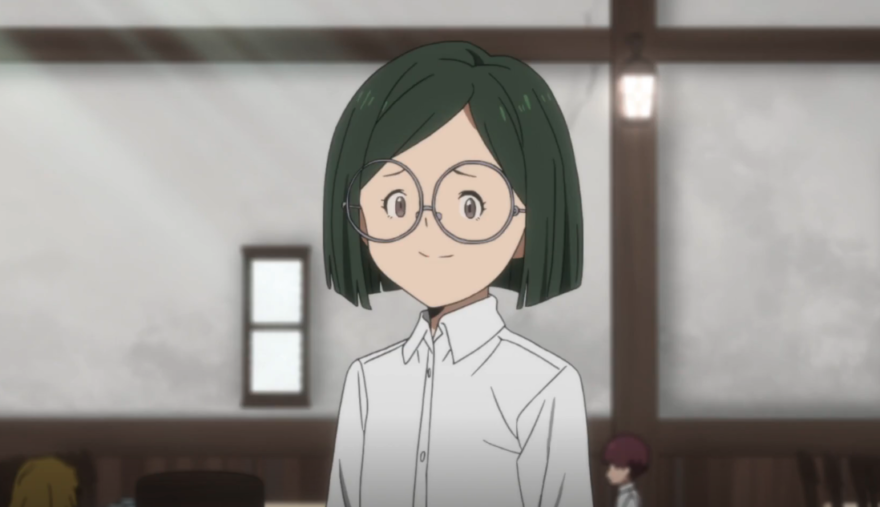 A supporting character in The Promised Neverland, Gilda is a 10-year-old orphan who works together with Emma, Norman, and Ray to escape the Grace Field House orphanage.

She is a soft-spoken and gentle girl compared to the rest of her adopted family but is also equally reliable, considerate, and thoughtful.

When Emma and Norman discover the dark trust of the orphanage, Gilda and the rest of the kids become desperate to run away from Grace Field and escape their twisted fate… 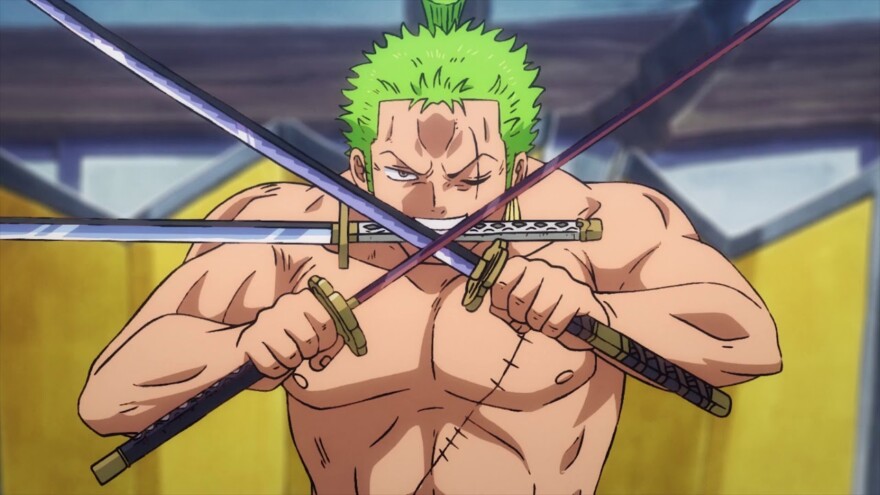 In One Piece, Zoro, a main character is known as the “Pirate Hunter” Zoro and a skilled swordsman, known for fighting with three swords at once!

He is the first to join Monkey D. Luffy’s pirate crew called the Straw Hat Pirates. Zoro is best known for his stoic and loyal nature and unbending will to protect his friends.

He joins Luffy on his journey out into the sea to find the legendary One Piece and become the Pirate King! 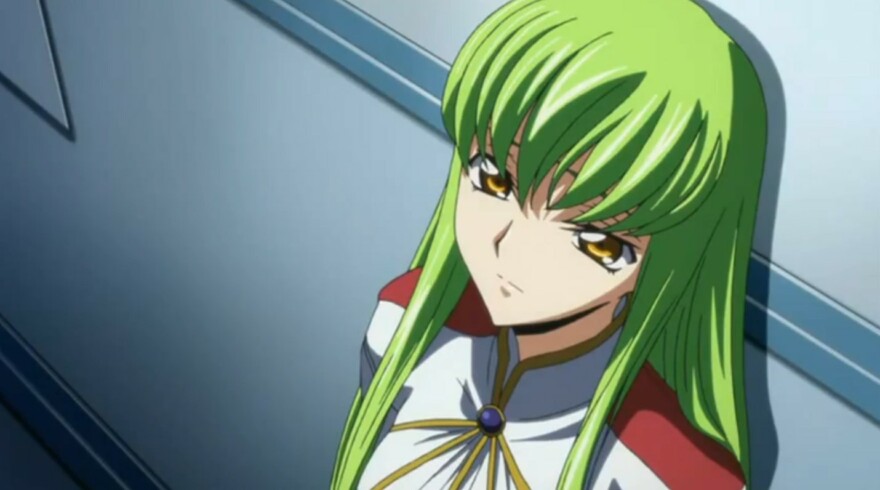 The main female protagonist of Code Geass: Lelouch of the Rebellion, C.C., is an immortal who can heal any injury.

She also has the ability to give people the power of Geass. Beside her signature long lime hair, C.C. is also best known for her lack of emotion as well as her stubborn and strong will.

With Japan at war with the Holy Empire Britannia, C.C. fatefully meets Lelouch Lamperouge and gives him the “Power of Kings.”

With this, he is able to form lead the rebellion as the masked vigilante Zero to defeat Britannia!