If you like J-Pop and K-Pop, anime has a bunch of idol series that will make you fall in love with their singers and real-life idol groups! Cute boys and girls singing, dreaming, and working hard to make all their loyal fans smile and make all of their dreams come true on stage~!

These are some of the best idol anime that I’m sure you will find yourself humming one of their songs to yourself. 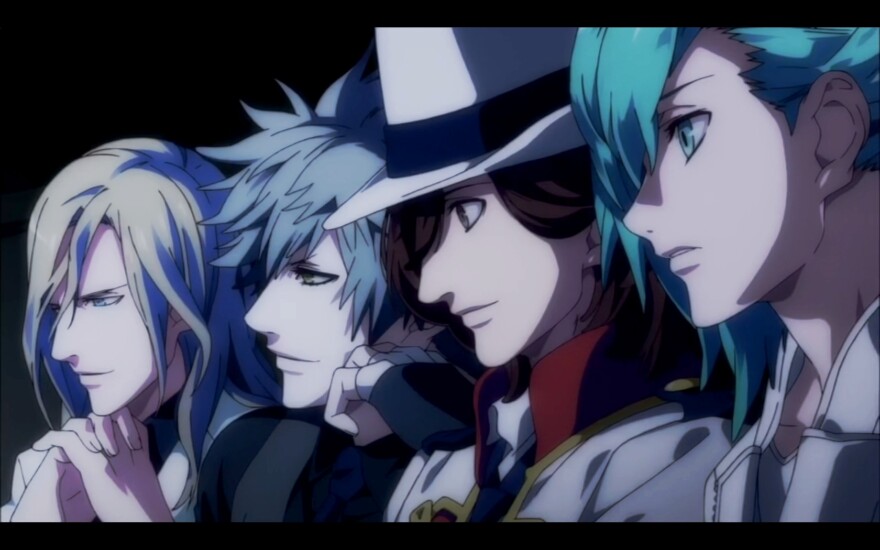 15-year-old Haruka Nanami enrolls at Saotome Academy. She came out from the countryside to follow her dream of becoming a composer and writing music for her favorite idol Hayato Ichinose.

At her new school, Haruka finds herself surrounded by talented and competitive idols and composers. They are working hard in hopes of being recruited by the Shining Agency.

Before long, Haruka gets caught up in a group of boy idols, all reaching for the same dream, including one of them who might share a strange connection to her favorite idol…

Despite being a beauty, 14-year-old Kirari Tsukishima never cared about the entertainment world or becoming something like an idol. After saving a turtle suck in a tree (yes, you read right), Kirari finds herself in front of a boy named Seiji who gifts her tickets to a concert of a popular idol group called SHIPS.

Curious and excited, Kirari runs into a different boy named Hiroto, who quickly rips up her ticket and tells her to stay away from Seiji. Huh? She and Seiji live in two different worlds that shouldn’t come together. Both Seiji and Hiroto are members of SHIPS.

Despite Seiji being an idol and Kirari being a normal girl, Kirari is determined to get closer to him—by becoming an idol herself! 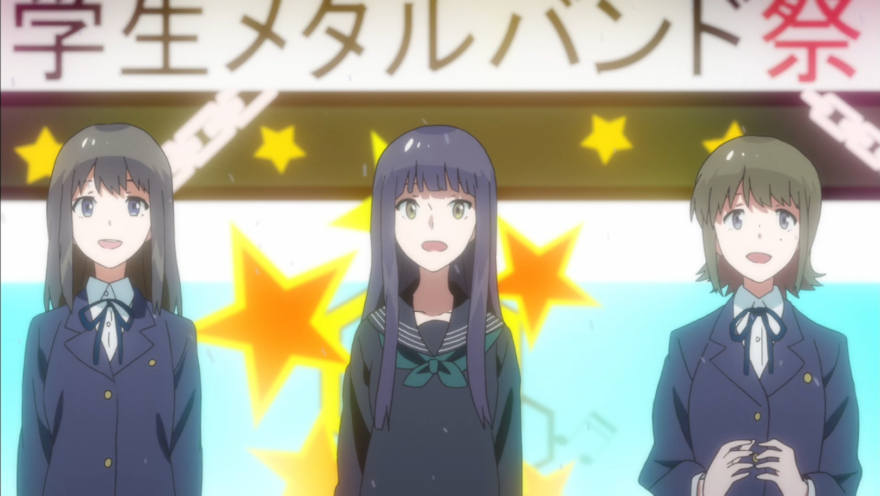 Green Leaves Entertainment has a reputation for being the worst Talent Management Agency. None of the idols have any talent! President Junko Tange is still determined to make a popular idol group…and gives all the responsibility to Kouhei Matsuda!

Starting from scratch, Matsuda has to find a group of girl to become his agency’s new and best idol group! Have fun with that, Matsuda.

Not knowing what to do, Matsuda starts picking out random girls! What could go wrong with that strategy *cough? Maybe all these nonsense choices of girls are actually what the idol world needs. 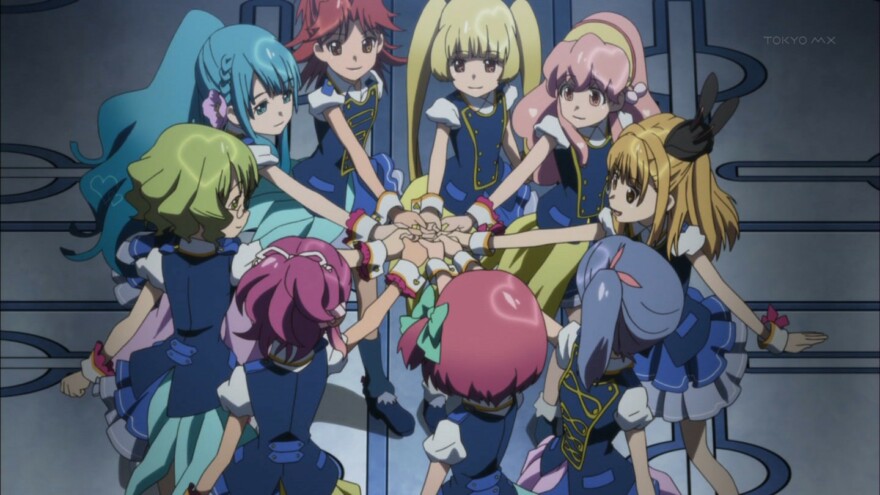 It’s the 21st Century, and Earth is destroyed! Normal life has come to an end, and soon the loss of hope will follow. What’s worse, the Deep Galactic Trade Organization blames it all on music (getting dystopian Footloose vibes here)!

Planning to ban and destroy all music, an idol group called AKB0048 steps in to protect music! Going from planet-to-planet, performing concerts, and playing music. Although they are threatened to be arrested over their heads, the idol group is determined to save the world through their love of music! 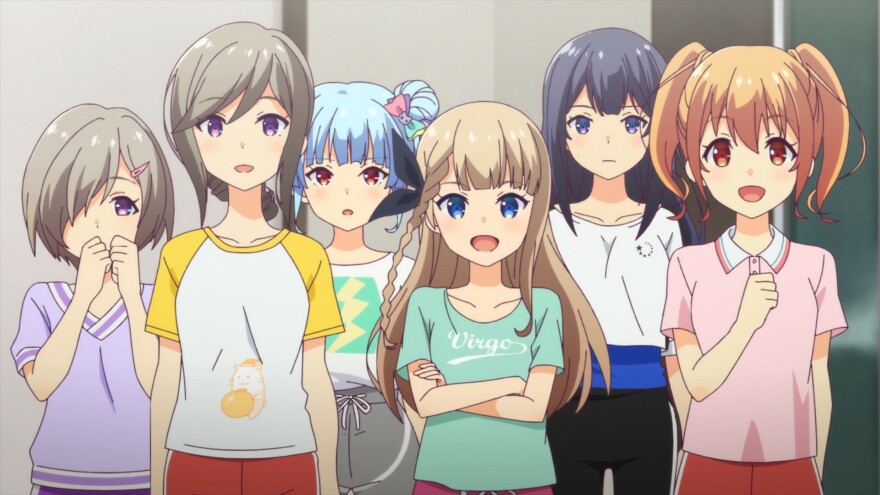 Mana Nagase was an inspiring idol whose talent and popularity were second to none. However, her dreams and goals all come to an end when she dies in a tragic accident.

Her former manager, Kouhei Makino, continues to search for new talents and builds a new idol group. Among the ten never members are Kotono Nagase, Mana’s little sister, and Sakura Kawasaki whose voice is identical to Mana’s.

Joining together, Kotono, Sakura, and the other eight girls must work hard as a new team to get to the top while struggling with the merciless world of idols. Will any of them surpass Mana and step out of her shadow? 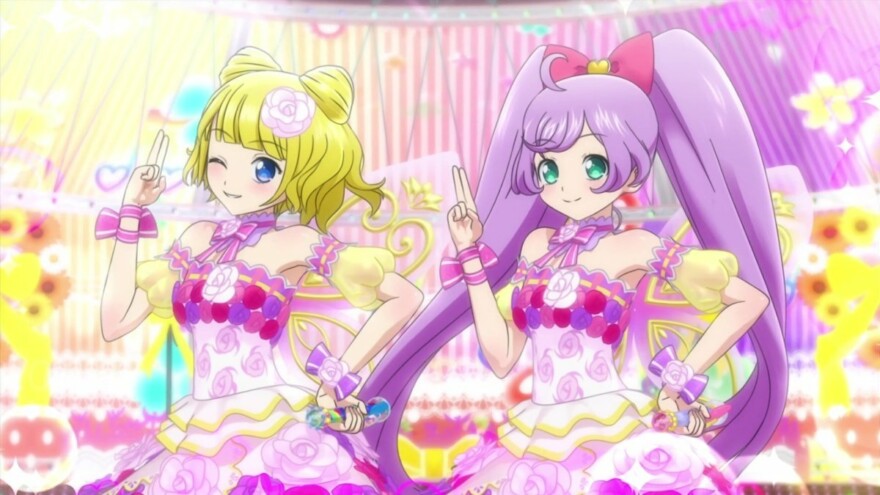 One day, every little girl will be mysteriously gifted with a special ticket. With it, they can be the idol world of PriPara (Prism Paradise)! All of 10-year-old Laala Manaka’s friends and classmates dream of becoming idols in PriPara! Not Laala. She enjoys sitting and watching in the audience.

So when Laala got her ticket to PriPara, she didn’t expect to perform and become a new popular idol, gifted with the legendary Prism Voice! Being surrounded by idols, fashion, and music, Laala became determined to become the top idol of all of PriPara!

9. If My Favourite Pop Idol Made It to the Budokan, I Would Die 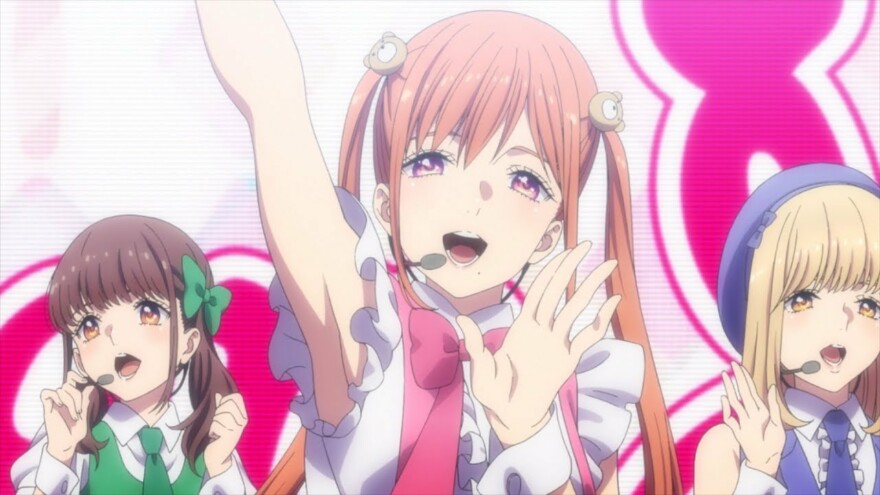 Eripiyo has always been a normal 20-year-old who suddenly discovers the world of idols through the idol group ChamJam. She becomes obsessed with them! More specifically, Maina Ichii! Sadly, Maina is the least popular member of her idol group.

Despite this, Eripiyo spends all her money on Maina’s merchandise and always goes to ChamJam’s concerts. Eripiyo is determined to support Maina no matter what, and Maina begins to worry that her fan is given up too much for her. 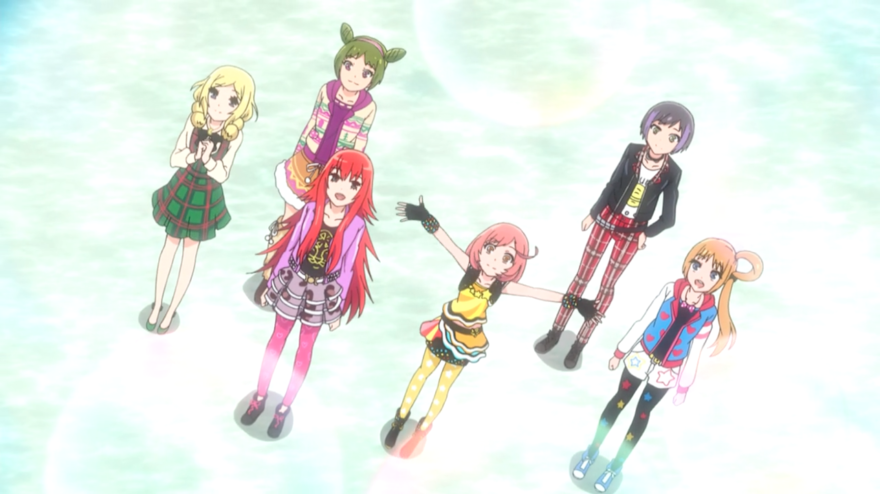 14-year-old Naru Ayse has always dreamed of owning a decorating shop like her favorite store, Dear Crown. With the unique ability to see the “color” in music she hears, Naru stumbles upon a new store looking for girl idols who can perform Prism Dance.

Despite not being an idol or knowing what it is, Naru blindly applies. While performing, a mysterious girl named Rinne joins her on stage who shows her “rainbow music” through the unique ability to use Prism Live! 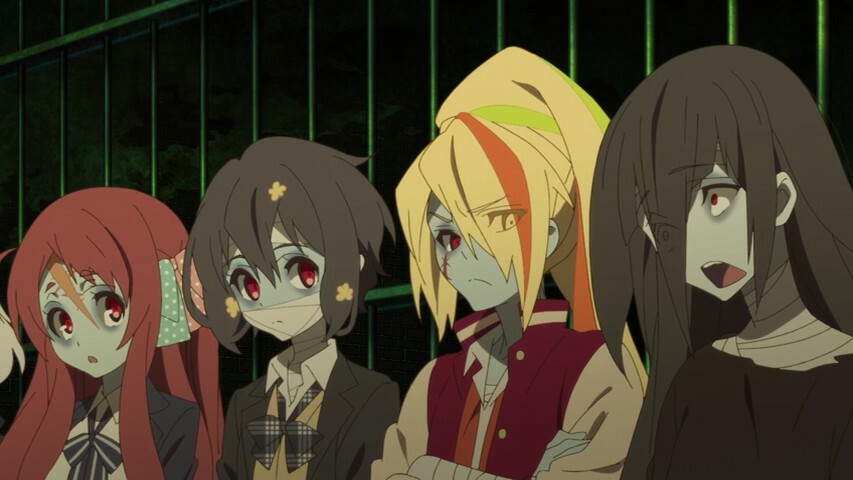 17-year-old Sakura Minamoto’s dream is to become an idol. Sadly, her life is cut short at the hands of a truck. Or is it? 10-years-later, Sakura wakes up with no memory of her life. Not only that—she’s turned into a zombie!

Standing over her is Kotaro Tatsumi, who tells her that Sakura is a new member of an idol group of zombies and must save the Saga Prefecture!

With six other zombie girls, Sakura forms the idol group Franchouchou. Together, they try to spread their popularity while trying to hide their undead secret and help Sakura remember her forgotten past. 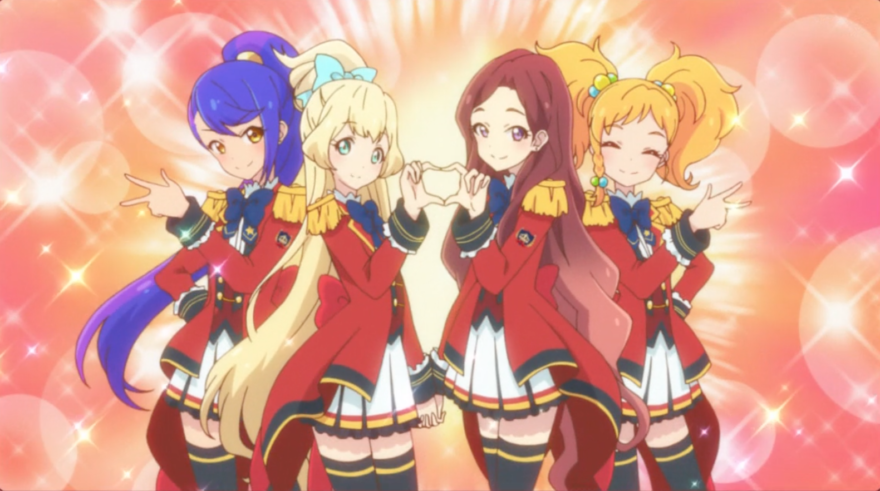 Quickly forming a rivalry with classmate Laura Sakuraba, Yume’s journey to becoming a member of S4 takes a terrible turn when her first performance of an idol end with her fainting on stage?

Does Yume have what it takes to join S4, or will her weaknesses and shortcomings take away her idol dream? 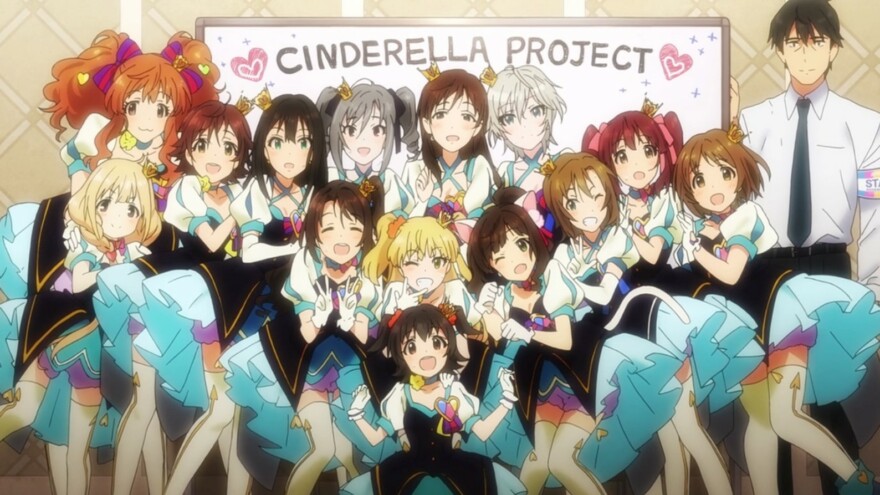 13 talented idols work for 765 Production Studio who all have the same dream to reach the top of the idol world! It’s not going to be an easy road. They have the rivalry of 961 Production and the hard work that comes with performing and singing.

As their popularity grows, the bonds they once shared start to fade away. Losing the balance of family, friends, and stardom, the girls will need to rely on each other more than ever if they are going to survive the harsh reality of the idol world and the consequences and sacrifices that come with success. 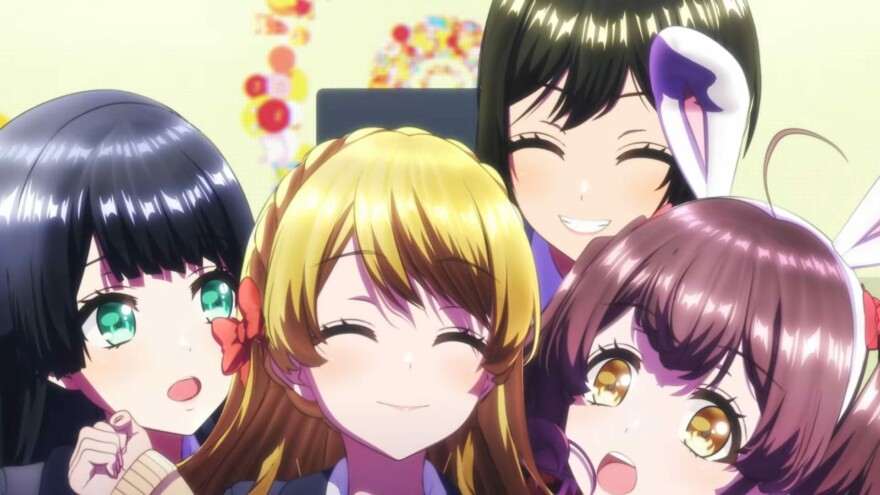 Coming back from living abroad, Rinku Aimot starts high school at Yoba Girls’ Academy, a school popular for DJing. Rinku never has an interest in that—until she met Maho Akashi, the school’s broadcaster and DJ. 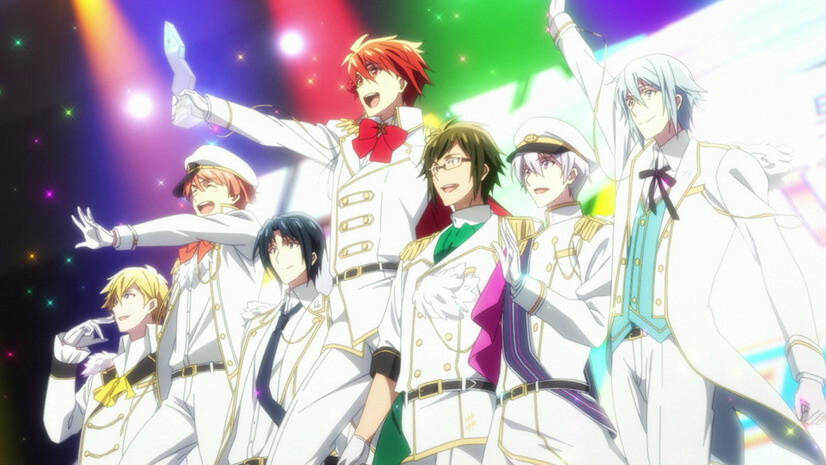 Tsumugi Takanashi wasn’t expecting to be made manager on her first day working for her father! Once more, it’s a production agency for male idol groups! Yet here we are.

Tsumugi promises her father that she will work hard for the seven idol boys! Her first job: cut one of the guys from the group!

That Tsumugi puts her foot down on, stating each member is important to the team and that she will make all of them famous! Appreciative to Tsumugi, the boy idols form IDOLiSH7 and will do whatever it takes to climb the competitive ladder of the idol world! 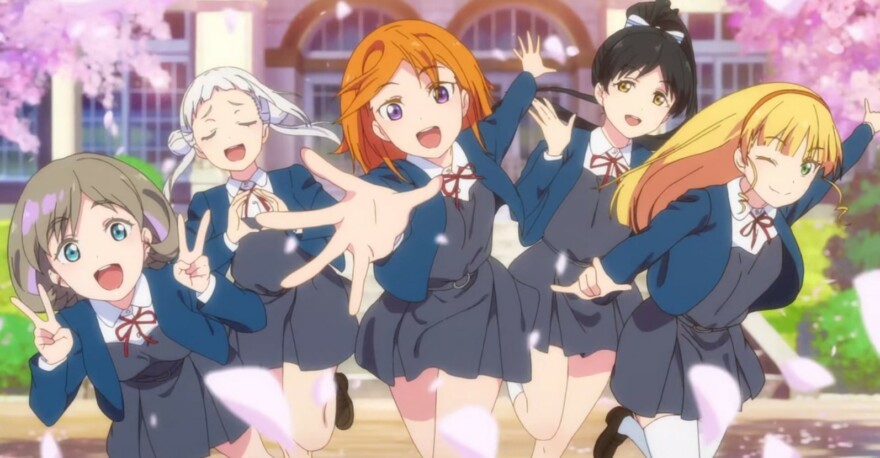 Despite having musical talent, 15-year-old Kanon Shibuya is crippled by her stage fright. She fails to get into the music program at Yuigaoka Girls’ High School and settles for the general program.

Kanon decides to quit music! Her classmate Tang Keke won’t let that happen and reignites Kanon’s love for music with the power of school idols!

Together, they form a school idol group and are immediately met with resistance from student council president Ren Hazuki. She states she will let them keep their idol group—if they win first place at the Yoyogi School Idol Festival! Easy enough…right?

16-year-old Kyoko Mogami has always worked hard to support her childhood friend and crush Shoutarou “Shou” Fuwa to reach his dream of becoming a pop icon. Shou only just took advantage of Kyoko’s kindness and naiveté.

After finding out that Shou has just been using her, Kyoko vows revenge! To get vengeance on her former flame, Kyoko joins him in the entertainment world and becomes a better idol star than Shou could ever dream of! Fight on, Kyoko!