Mermaid anime deserves to be part of our world~! There are well-known characters in the series that will have a mermaid, but few shows are revolved around mermaids.

Instead, some hidden gems or pearls are hidden deep in the ocean, waiting for the bravest weebs to dive down and find them.

Mermaids are beautiful and enchanting creatures with their glistening tails and siren songs.

These series bring light to the world in the water and how lovely mermaid can bring the gap between the land and sea. 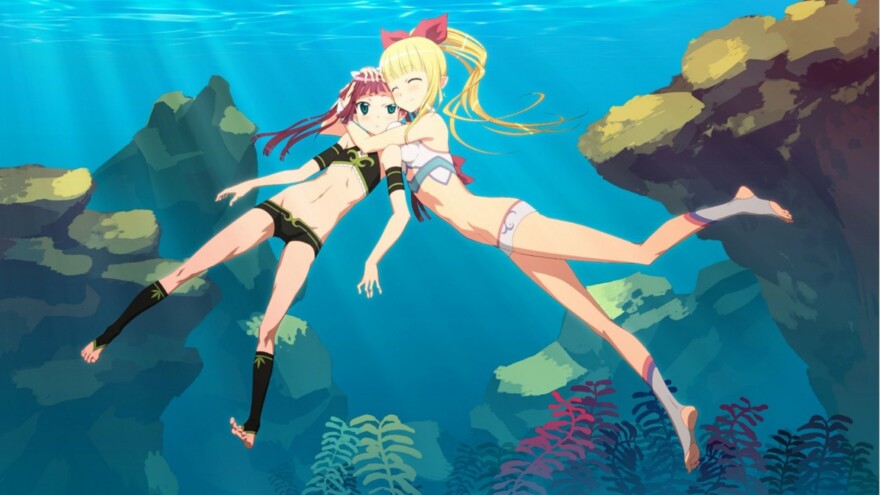 Although they don’t have the traditional mermaid tails, sisters Marin and Urin are sea folk that happens upon a silver ring and are determined to return it to its owner.

They pop their head up to the surface and find high school girl Kanon Miyamori.

Kanon tells them she tossed her ring into the ocean when her boyfriend broke up with her. She throws the ring back into the sea, and Marin and Urin become separated when they swam down to find it again.

Two girls from two different worlds must come together to save their shared world and defeat Sedna. 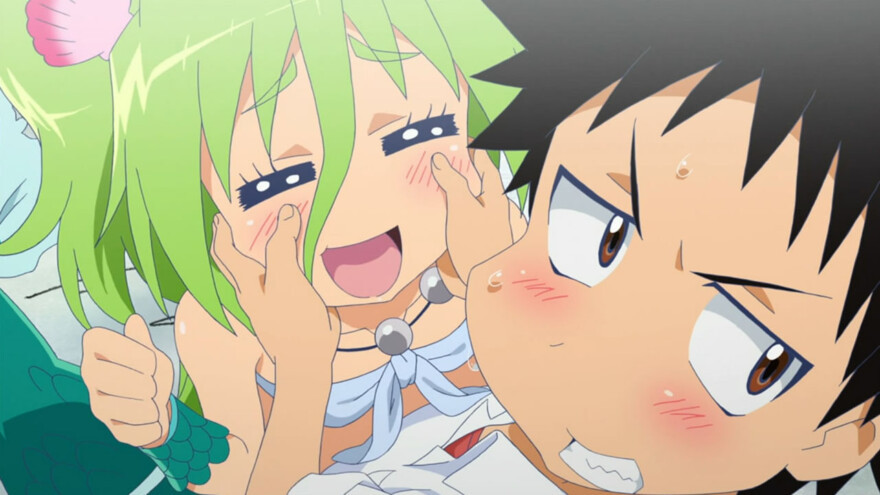 Teenage Takuro Mukojima spends his time fishing alone at the pier. One day, he catches something…or someone? It’s not a fish—it’s a mermaid! Her name is Muromi, and self-proclaimed guardian of the Earth.

Upon meeting Takuro, she gains love and curiosity for human culture and drags Takuro along on her misadventure in the human world and slight drinking problem.

Along with her friends and sister, Muromi comes up to the surface to see Takuro and take him along on her high jinks. 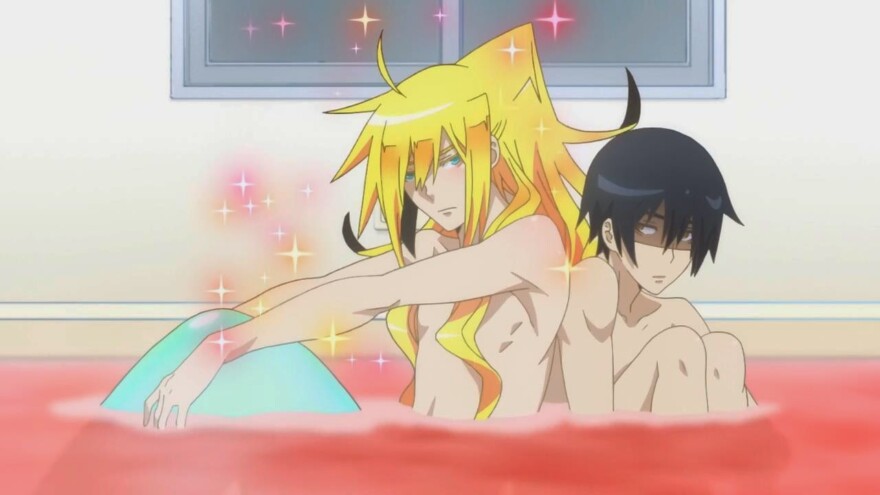 Getting home from a long day at school, Tatsumi didn’t expect to find a man collapsed on the shore. But, on closer inspection, the man isn’t a man at all—he’s a merman!

Tatsumi decides to take the merman, Wakasa, home with him and stay in his bathtub with his home ruined by pollution.

With that, Tatsumi’s normal life has come to an end, and now he has to deal with having a merman as a roommate to invites his aquatic friends to join him. 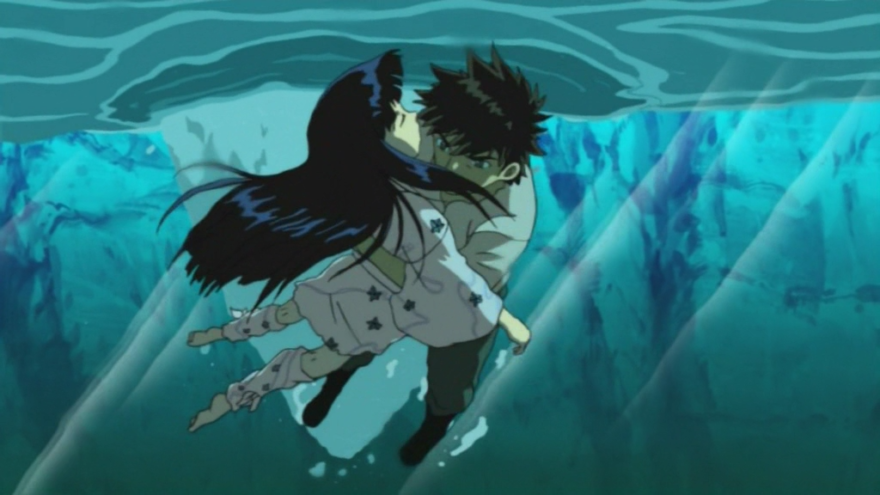 It was believed that consuming the flesh of a mermaid can give you immortality. Yuta is living proof, having lived five centuries in Japan in hopes of finding a mermaid that can turn back into a mortal.

Yuta finally finds one, but it has a girl that it plans to eat to gain her youthful beauty. Yuta kills the mermaid and saves the girl, but she has already eaten the mermaid’s flesh.

Now, Yuta walks the immortal plain with Mana, who takes joy in the little things Yuta has long since looked over.

Together, the two find beauty and happiness in day-to-day life as they try to turn back into humans. 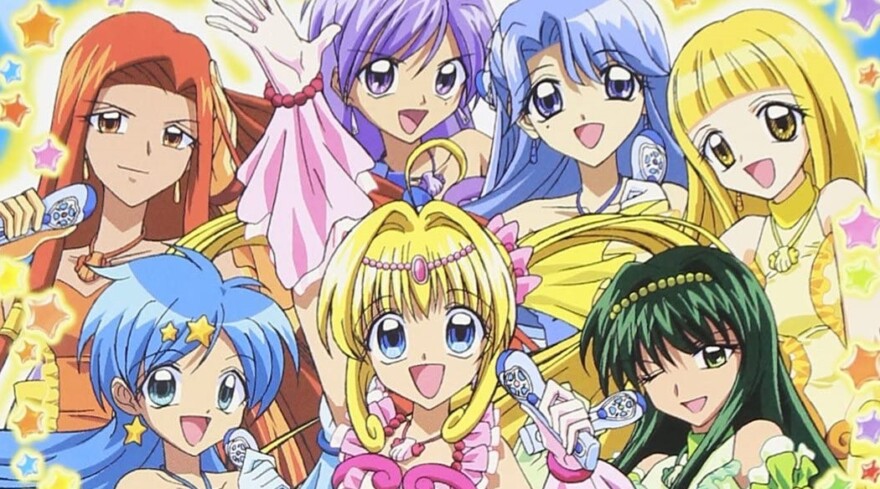 13-year-old Lucia Nanami is the mermaid princess of the North Pacific Ocean who entrusted her magical pink pearl to a boy she saved in a tsunami.

Lucia travels to the human world to recover her pink pearl and finds the boy is Kaito Doumoto. Has grown up into a handsome surfer and falls in love with him.

However, Kaito doesn’t recognize her human form, but Lucia can’t tell him who she is, or she’ll lose her powers.

Lucia uses her mermaid and music powers to protect Kaito’s world and her own when evil forces reach his world. 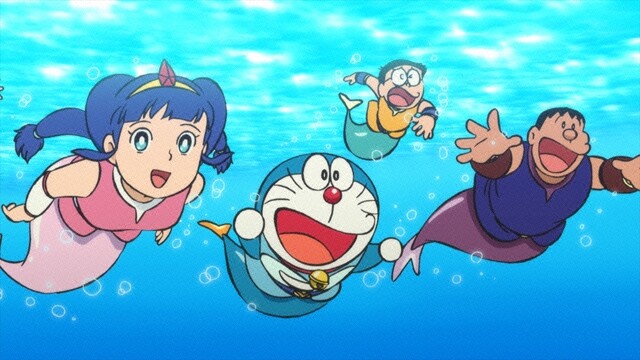 The robot-cat Doraemon is in and Nobita Nobi’s backyard when a mermaid princess named Sophia shows up.

She becomes quick friends with them and their friends and is all invited back to her underwater kingdom.

While there, Doraemon and his friends get caught up in a clash between the mermaids and another tribe trying to drive them out of their kingdom.

Doraemon, Nobita, and their friends must help Sophia save her people by finding a legendary sword! 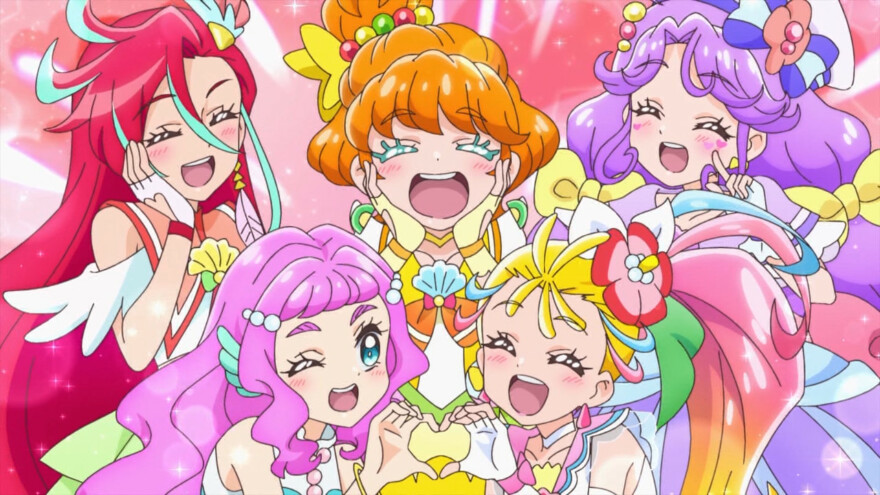 Manatsu Natsuumi is a fashionable and energetic 13-year-old excited about moving some a small island to a big city. Exploring the vast city, Manatsu finds someone she never expected—a mermaid named Laura!

With her home, the Grand Ocean, in danger, Laura came to the human world in search of legendary warriors known as Pretty Cure! Manatsu becomes one of the Pretty Cure—Cure Summer!

Now, she will help Laura, her missing teammates, and save both of their worlds from the evil threat that lurks in the ocean.

5. This Boy Caught A Merman 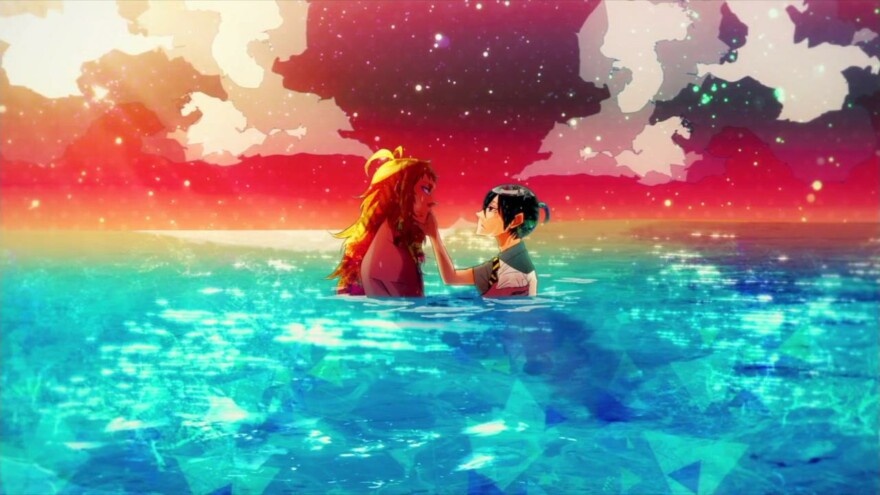 When Shima Kawauchi’s only picture of his late grandfather falls into the sea, he jumps right in to get it without thinking.

He almost drowns but is saved by a man—a merman named Isaki!

Shima and Isaki become quick friends despite being total opposites and well as opposite species.

Although they want to be together, the border between the land and sea might be difficult to overcome. 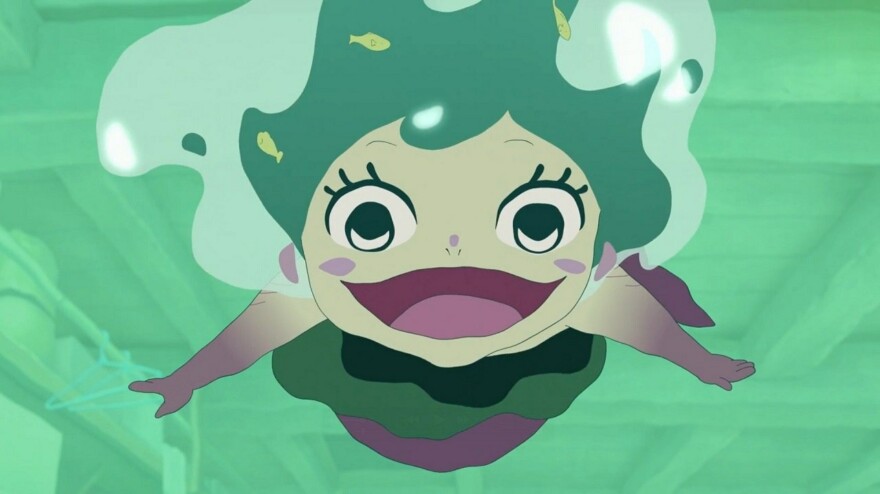 After his parent’s divorce, Kai Ashimoto lives from the big city to a small fishing village, where he works as a sun-umbrella maker with his father and grandfather.

Kai writes songs and uploads them onto the internet to sort out and let out all of his complicated feelings.

One day, he’s asked to join his classmates’ band and follow them to their practice spot on Merfolk Island. It’s there that they meet Lu—a mermaid!

Although mermaids were believed to bring disaster, Kai finds himself growing close to Lu, enjoying her silly songs and dances.

But when Kai’s town is in danger, does he have to strength inside his own heart to save them?

3. My Bride is a Mermaid 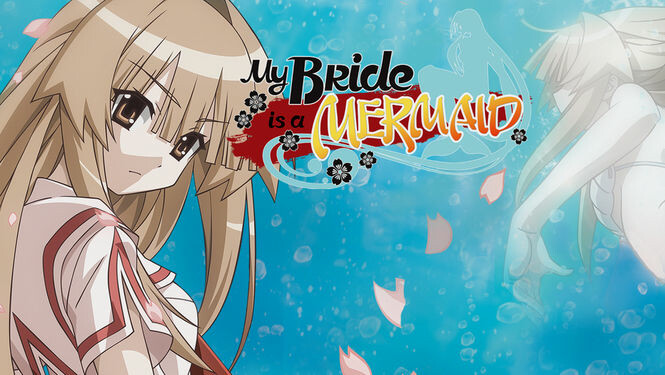 14-year-old Nagasumi Michishio is excited about summer vacation and takes a trip to the Seto Inland Sea. While swimming, his leg cramps up, and he almost drowns. Nagasumi is saved by a mermaid!

His savior is Sun Seto, a mermaid of a yakuza family, but tells him that when a human discovers a mermaid’s identity—their punishment is execution!

Saved from drowning to just die anyway—how is that fair?!

To stop his execution, Nagasumi must marry Sun. Seeing no other option, Nagasumi accepts. Brought together by force, can true love bloom between this human a yakuza mermaid? 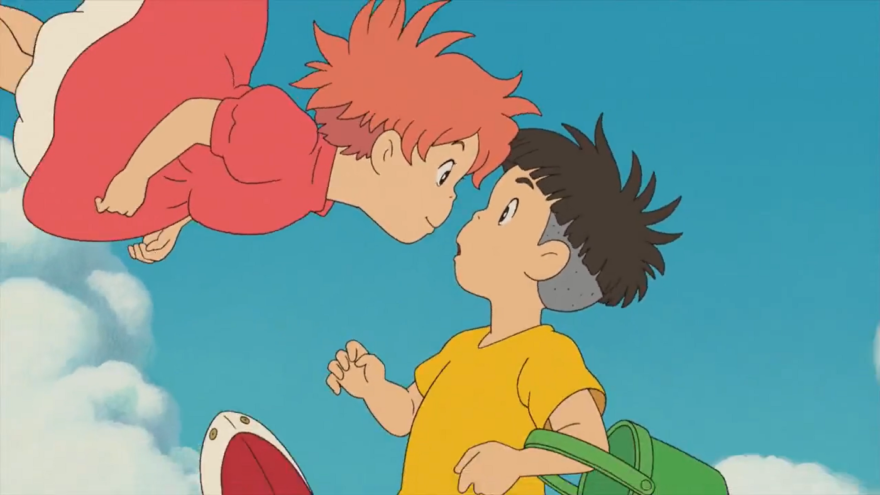 A female goldfish escapes from home and gets stuck in a glass jar. It washes up on the shore of 5-year-old Sousuke’s house, who finds her. Sousuke names her Ponyo, and the two become friends.

When he gets some of Sousuke’s blood from healing a cut on his finger, Ponyo decides that she doesn’t want to go home and wants to be a human!

However, her release of magic causes the Moon to fall and begin a dangerous flood that could destroy Sousuke’s home!

It’s up to Sousuke and Ponyo to restore the Moon, save their world, and make Ponyo’s dream of becoming a human come true. 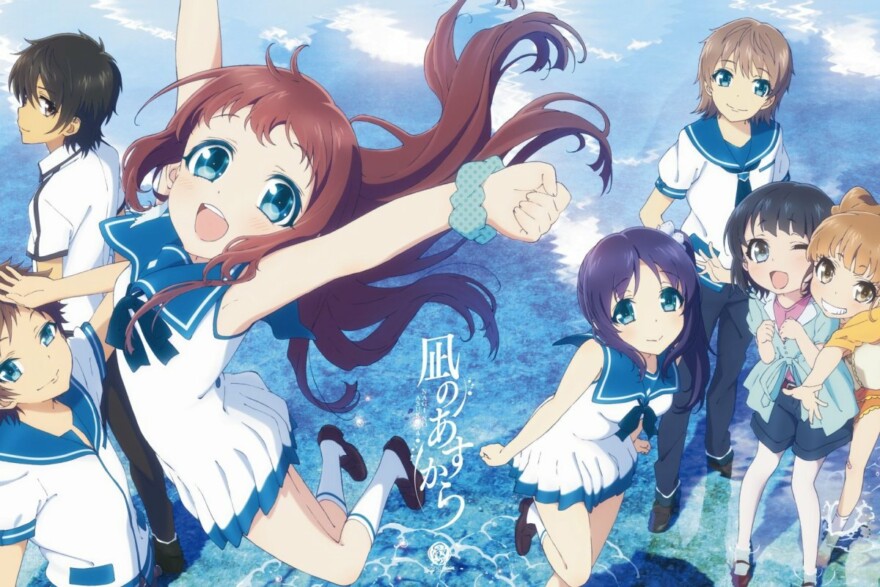 Although they don’t have mermaid tails, God gave the seafolk “Ena”: a special protection in their skin that allows them to breathe underwater.

14-year-old childhood friends Hikari Sakishima and Manaka Mukaido have turned beneath the sea all their lives.

Chisaki Hiradaira and Kaname Isaki are the only children in their village and must come above surface to go to school.

There they have a moment of fate when they meet classmate and fisherman Tsumugu Kihara.

Their new friendship begins to mend the hatred of the past and bridge the gap between the people of the sea and surface.