While not quite as mainstream as 5e, Pathfinder has quite a following. The systems are very different in terms of the tabletop roleplaying games, but they are both set in a fantasy world. While character and creature designs and concepts are different many of the miniatures are suitable to be used with both.

The Bestiary Pawn Box is less about miniatures and more about a massive selection of creatures available to the game master. The set contains 375 creatures for use with Pathfinder or any fantasy RPG. Each piece of fantastic art in the Pathfinder bestiary is printed in color on high-quality card stock.

The set also comes with a variety of bases to slip the cardstock pieces into. The bases are sized appropriately to mix in with metal or plastic figures.  While not as fancy as 3D plastic figures, this is a great cost-effective alternative for use with your battle map. 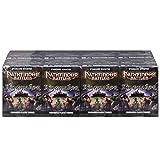 Booster Bricks are a great way to get a bunch of figures, and the Pathfinder Battles: Kingmaker 8 count is no different. The brick contains 8 booster boxes, and each box contains 4 figures for a total of 32 miniatures.

These figures are randomly assorted and feature one large and 3 medium or small pieces. All of the figures come painted and ready to use right out of the box. The Kingmaker set is the latest set released for Pathfinder Battles and features 44 different figures in total. 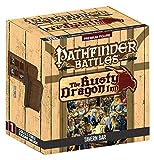 Another selection from the Pathfinder Battles set is the Rusty Dragon Bar. This is a setting piece that is several inches tall and is actually big enough to contain other figures.

The set is a location that would fit well in any game and is a great representation of your favorite inn, tavern, or bar. The plastic set comes painted and has numerous little pieces to really add some depth beyond just a bar with stools. 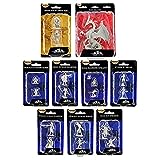 The Wave 14 Deep Cuts bundle features several miniatures that are part of the unpainted collection. It offers a variety of minis suitable for player characters and non-player characters.

They include a female halfling cleric, a male human champion, a blue dragon, a female human rogue, and more. All of the miniatures are assembled and are in the factory blister packs.

Another great bang for the buck set, the Bestiary 3 Pawn collection, features 300 more monsters. All of the Bestiary 3 monsters are printed in high-quality color on sturdy card stock. This is the best way to ensure you have a great selection of monsters for your home game.

As with most fantasy RPG’s these tokens can be used with many systems and bring the battle grid to life. It also comes with the assorted bases to easily mix in the pawns with your 3D minis. 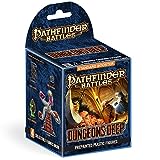 The Dungeons Deep Booster pack follows the trend of other booster bricks. It contains 8 booster packs, each of which contains 4 figures, 1 large and 3 small or medium. All 32 figures come painted and ready for game night. The Dungeons Deep set is comprised of 51 minis in total.

This is a great way to bulk up on some fodder enemies. There is a strong possibility of duplicates as the boxes are packed randomly. 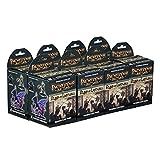 Ruins of Lastwall is another great value as a booster brick of miniatures. There are several different creatures available, and each booster brick delivers 32 miniatures in total. The booster boxes are comprised the same as the others, with 1 large and 3 medium or small figures.

There are also dungeon dressing items that add depth to the battle map. While the boxes are packed at random, there are a handful of rare items to be found, and the large figures include various types of dragons and other massive foes.

The last of the Bestiary Pawn box sets, Bestiary 2, features all of the same things as boxes 1 and 3. This one does include treasure chest buttons, though, for a little extra bonus. This set contains a massive 375 pawns and a variety of bases with a good selection of different sizes.

The images of the beasts are printed in high detail color on quality card stock. All of the bases and monsters are to scale for use with standard battle mats.

Sometimes less is more, and that might be the case with the Air and Fire Elemental Lords from the Pathfinder Maze of Death. This pair of massive figures tower over standard miniatures in the way elemental lords should. Both are highly detailed plastic and come painted and ready to use.

These would be a great addition to any fantasy TTRPG bad guy collection. 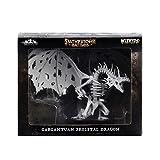 The name alone should cause players to sit up in their seats at the table. A gargantuan skeletal dragon really demands some attention when it hit the battle map. The figure is huge and towers over standard minis. It is a great addition to any Game Master’s arsenal of baddies.

There are some durability concerns when compared to the other gargantuan dragons in the Pathfinder series, but this piece is too cool to pass up.

All fantasy role-playing games have increased in popularity, and while 5e has made it easier than ever for new players to get involved, games like Pathfinder still have a thriving community. The miniatures for almost all fantasy RPGs are interchangeable as they merely physically represent a monster in the area.

Yes, it is great to have custom-painted 3D plastic minis for every battle, but a cardstock picture in a nice base and a little imagination can get the job done. There are many options out there, so choose the one that works best for you.