Although it’s easy to recommend the most popular and mainstream anime shows, it can be far more special and rewarding when you find that diamond in the rough.

There are tones that deserve more attention, and here are a few long.

They may not be masterpieces, but their unique and lovable characters and equally engaging stories all have something important to say. 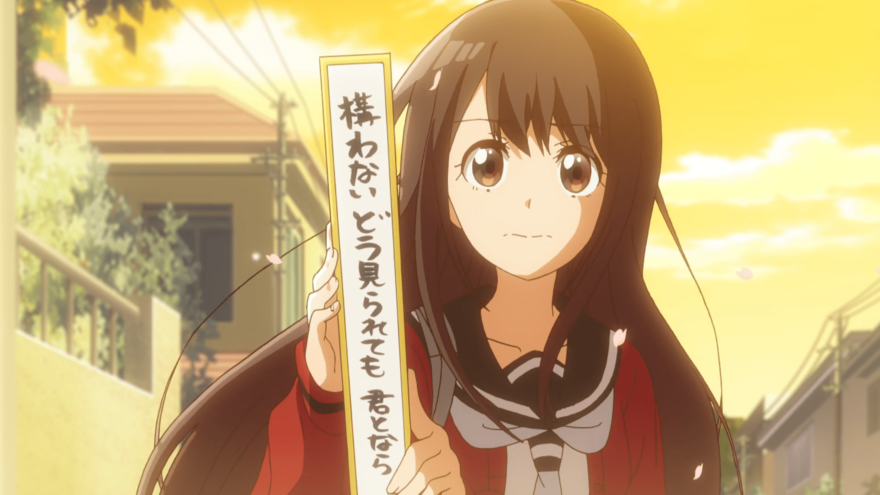 An underrated feel-good series about two total opposites that find each other through a high school club. 16-year-old Nanako Yukishiro is a pure-hearted and down-to-earth girl who is mute.

She writes her thoughts and feelings through senryu, a style of poetry.

Eiji Bukushima, on the other hand, has been a delinquent for most of his life and doesn’t want to scare people anymore and tries to express himself through poetry.

The two of them become members of their school’s Literature Club, and a new friendship begins. 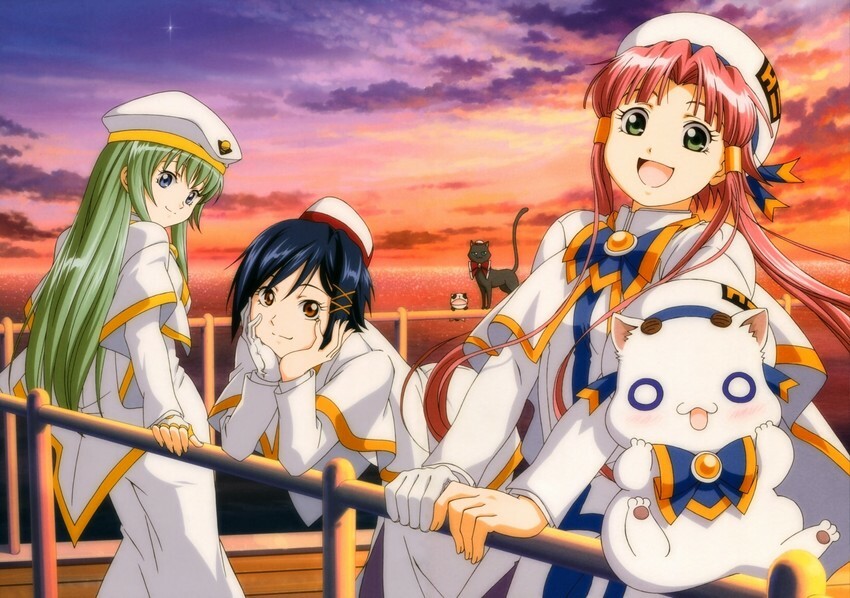 In the 24th century, Mars has become known as Aqua, where humans now inhabit. It’s a beautiful planet known for its lovely mode of transpiration, the waterways.

Tourism is the best Aqua has to offer through tours on gondolas by a company called Aria Company.

This is where 15-year-old Akari Mizunashi begins working and learns priceless lessons through new friends, tourists, and residents of Aqua that make life all the while. 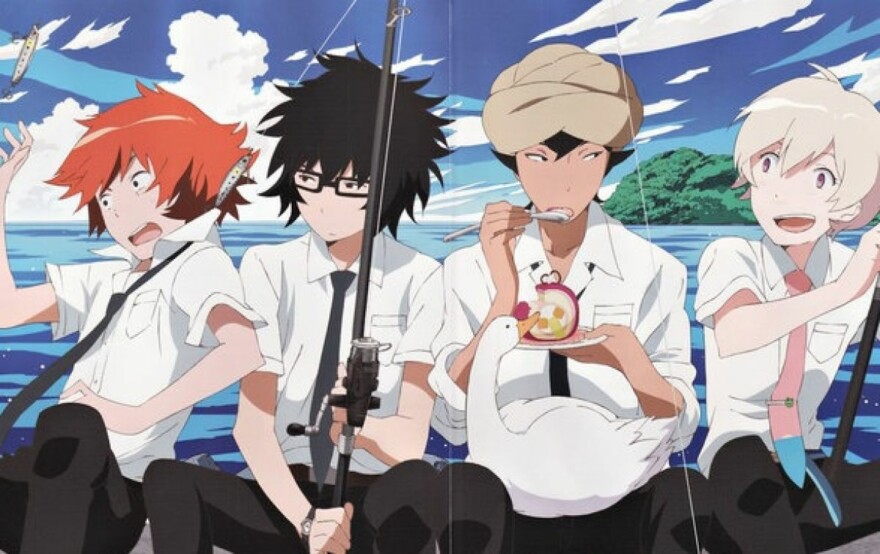 Because of his grandma’s job, Yuki Sanada is never in the same place for long and is never able to make any long-lasting friends or develop social skills.

When they move to the island of Enoshima, he hopes the seashore town will be his last.

What he doesn’t expect is for a boy named Haru to enter his life declaring to be an alien and dragging Yuki along to go fishing.

Not just him, but a young boy named Natsuki Usami and an Indian man named Akira.

Yuki thinks he doesn’t want to be here anymore, or maybe this is exactly what he needs. 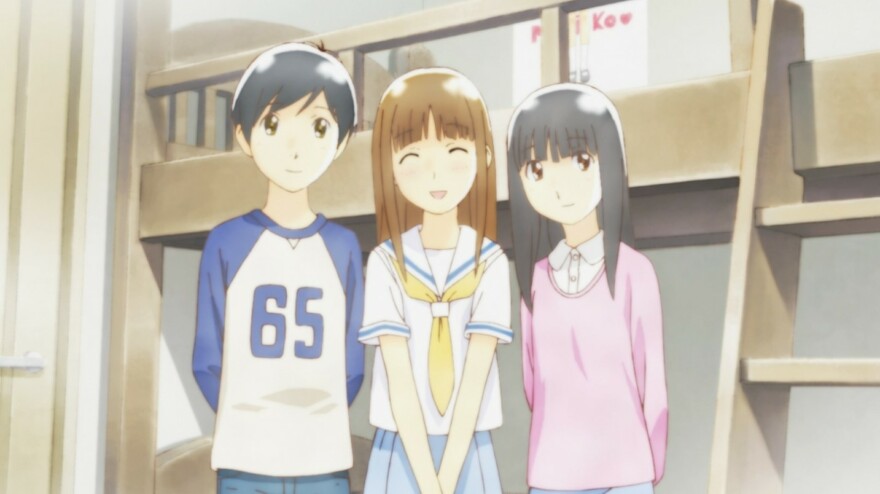 A refreshing drama-romance that deals with important topics transsexuality, identity, and having to face the good, the bad, and the ugly of the world.

It follows 5th graders, Shuichi Nitori and Yoshino Takatsuki, both trying to discover who they are and who they want to be.

Shuichi is a very cute girl but is biologically male while Yoshino is born a girl, she doesn’t identify as one.

Luckily, they have each other to navigate this unknown territory and find their way through life. 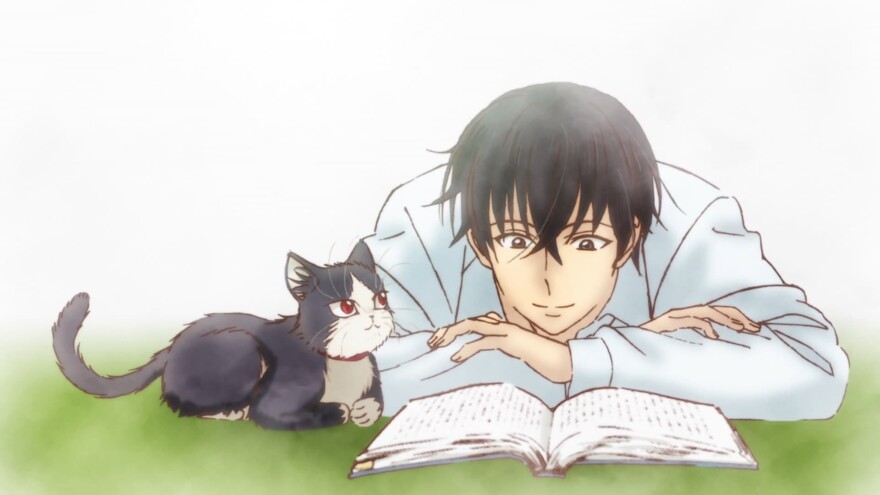 A slice-of-life that brings to light the importance of companionship.

Ever since both of his parents died, 23-year-old author, Subaru Mikazuki, has been lonely, extremely shy, and struggles to take proper care of himself.

One day when visiting his parents’ grave, Subaru is greeted by an abandoned kitten named Haru and ends up taking her home.

Haru is thankful to Subaru for saving her from the streets, and the two of them begin to better each others’ lives. 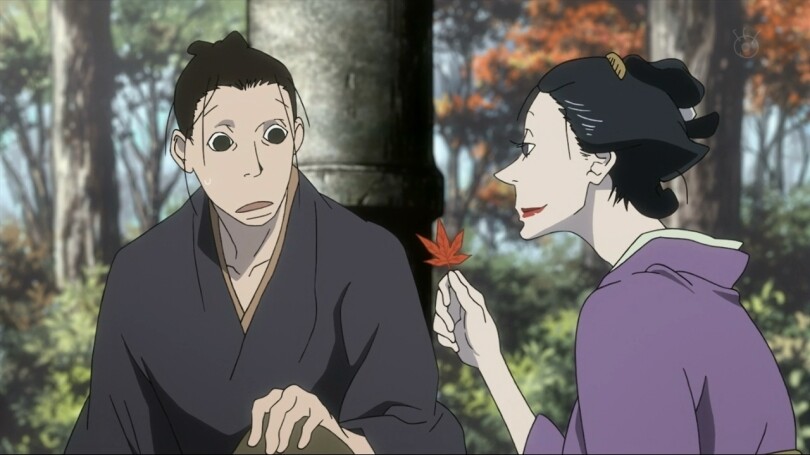 Taking place in the Edo period, Masanosuke Akitsu is a wandering samurai who struggles with employment due to his timid and mousy personality despite being a talented swordsman.

One day, Masa runs into a man dressed in pink named Yaichi, who wants to hire Masa to be his bodyguard.

Although being an honorable samurai, Masa accepts the job and becomes very conflicted when he learns Yaichi is the leader of bandits known as the “Five Leaves.” 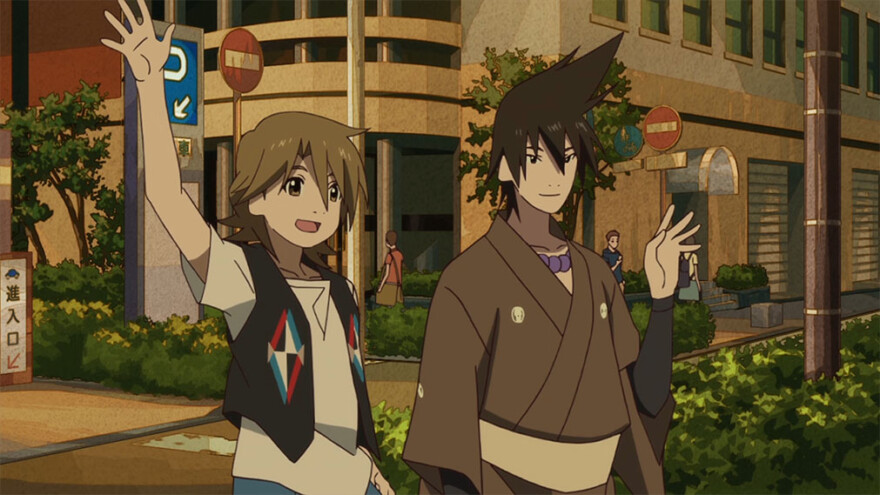 Unbeknownst to the human of Kyoto, tanuki and tengu live among them, and Yasaburo happens to be a tanuki, the third son of the Shimogamo family.

He loves getting in trouble and curiously watching humans with his ability to shapeshift as a tanuki.

Hidden behind his carefree life, Yasaburo struggles with his father’s death when he was killed and eaten by a group of humans.

All four Shimogamo brothers grapple with their father’s death and, soon, they all begin to learn the truth. 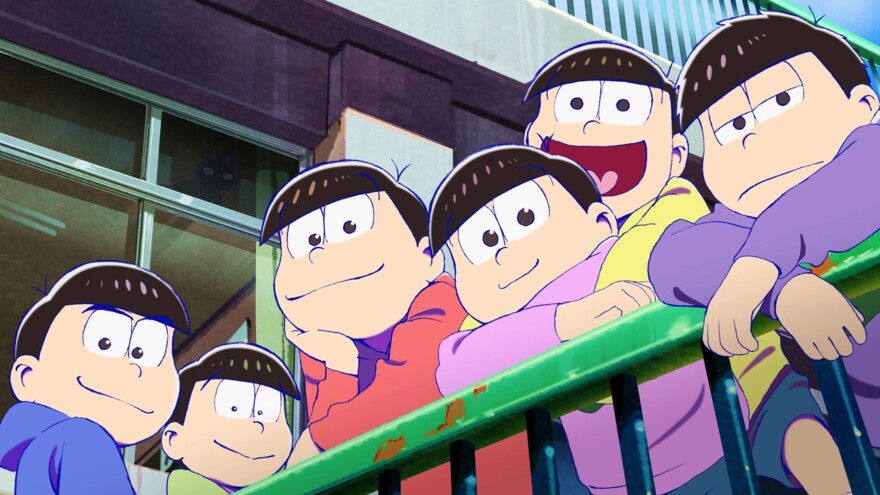 A comedy parody that follows the Matsuno family of young adult sextuplets.

Osomatsu: the self-absorbed and self-proclaimed leader, Karamatsu: a man’s man, Choromatsu: the level-headed one, Ichimatsu: the pessimistic, Jushimatsu: the energetic brat, and Todomatsu: the adorable and sweet one.

Despite having totally different personalities, they are all equally lazy, unmotivated, and are all NEETs.

I’m sure their parents are proud. Whether they’re trying to get a job, a girlfriend, and complete everyday deeds, you can always count on the Matsuno brothers to somehow screw it up and send them all on crazy adventures.

7. Sleepy Princess in the Demon Castle 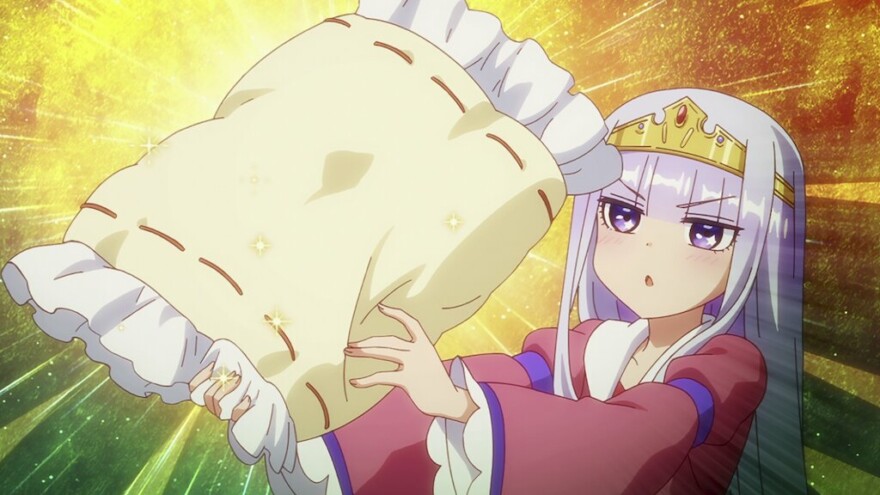 When the Demon Lord kidnapped Princess Syalis and trapped her in his castle. He expects her to be terrified by the horrifying monsters inside.

The petite Syalis, on the other hand, only wants one thing: sleep.

She begins exploring the castle for anything to make a pillow and blankets so she can have a tranquil slumber.

Everyone is in danger of Syalis sleepy desires, especially the monsters of the Demon Lord’s castle. 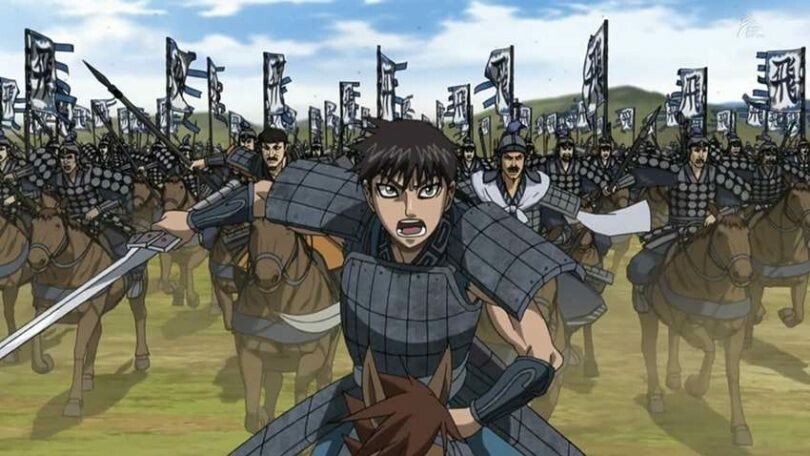 In an historical-action series, China is at the mercy of a powerful dragon for 500 years, leaving only seven states standing. An orphan from war, Li Xin is a slave in Qin with his best friend, Piao.

Despite being an orphaned slave, Xin dreams of becoming a Great General of the Heavens.

Xin and Piao get separated when Piao has to serve in the royal palace.

When they meet again, Piao is half-dead, and Xin begins his journey to becoming a Great General while trying to uncover the mystery of Piao and China’s young king, who looks just like him. 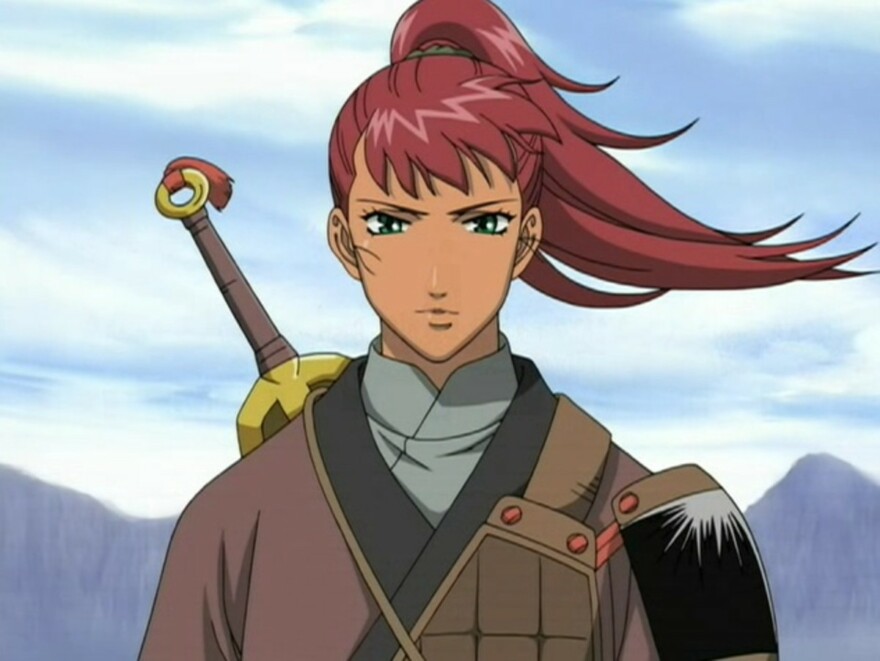 16-year-old Yoko Nakajima only wants one thing in this world: to be normal. She tries to fit in and be what everyone wants her to be.

The thing that always ruins it is her bright red hair and tanned skin.

On one of her normal school days, Yoko runs into a mysterious man named Keiki, claiming to be from another world, and Yoko is not only his master, but she belongs on his kingdom’s throne.

They are both attacked by creatures called youma and escape back into Keiki’s world, but not without accidentally dragging two classmates, Ikuya Asano and Yuki Sugimoto, along. Definitely not normal. 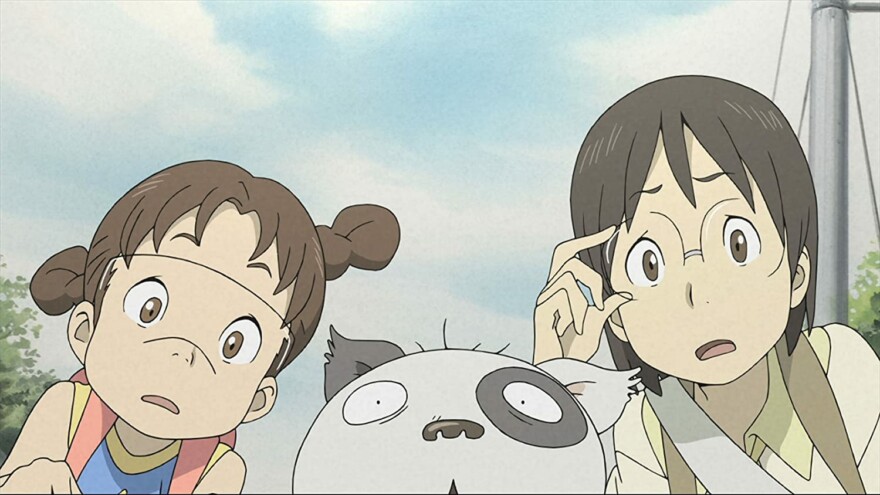 Taking place in the technologically advanced 2026, 11-year-old Yuko “Yasako” Okonogi and her family recently moved to Daikoku City, the heartland of the future tech.

It’s there that her family opens up a shop and begins selling illegal gadgets for the virtual world. Yasako becomes a part of a digital detective agency called “Coil” with other kids her age who solve virtual world corruption.

It’s with her new friends that Yasako begins to get mixed up in the digital side of the world that involves conspiracies, cover-ups, and what this new technology could mean to the real world. 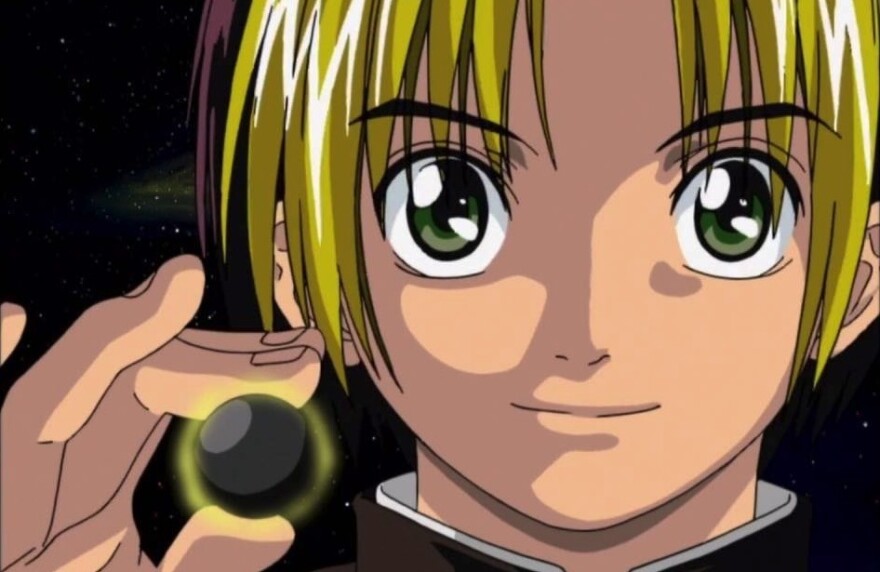 A shonen-game series that follows Hikaru Shindo, who finds his grandfather’s go board game in his attic.

Hikaru gains the ability to hear the voice of Fujiwara-no-Sai, a spirit that so happens to be an ancient go expert.

Through Hikaru’s body, Sai hopes to master a divine go technique never before achieved by a human, let alone an ancient spirit.

Hikaru knows nothing about how to play go but agrees to play for Sai. It’s not until Hikaru meets go genius, Akira Touya, that Hikaru gains a new sense of passion and starts him and Sai on their path to master the game.

2. Liz and the Blue Bird 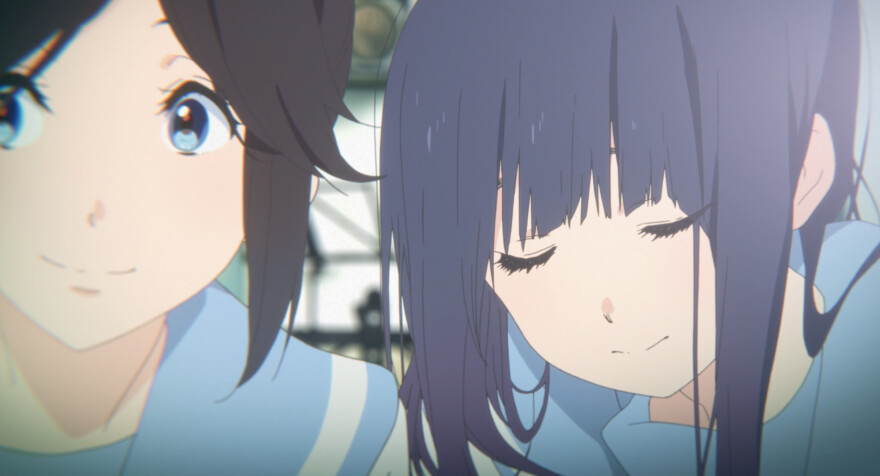 A spin-off movie from the Sound Euphonium! series that focuses on supporting characters, Mizore Yoroizuka and Nozomi Kasaki. The two of complete opposites, but the best of friends.

Mizore is quiet and reserved and the only one in the school band that plays the oboe, while Nozomi is sociable and popular with the other flute players in band class.

They share one thing in common: they fear that friendship will be over when they graduate high school.

Both of them have to face this sad fact when the two of them are chosen to play lead in one of their songs, Liz and the Blue Bird, that mirrors their friendship and their inevitable fallout. 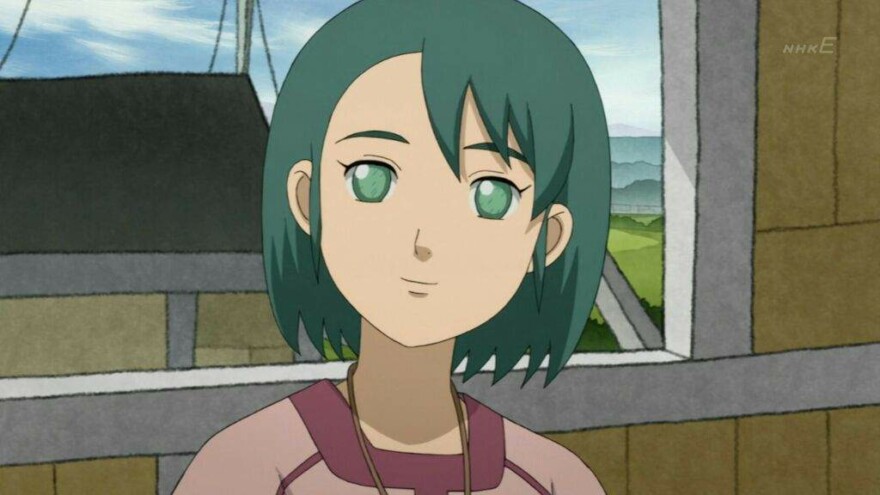 In a fantasy world known as Ryoza, the lands of Shin-Ou and Tai-Kou threaten to break out into civil war.

If they do, the Grand Duke of Tai-Kou is prepared to fight with a war dragon-like creature called “Touda.”

However, when the strongest Touda suddenly dies, the Grand Duke blames the village’s doctor.

Her 10-year-old daughter, Erin, tries to save her mother and ends up falling into a river and is carried away to Shin-Ou.

Now, Erin has to adapt to her new life and new people while trying to uncover the truth of her mother and the Touda before the two provinces escalate to war.