A new piece of gear is a decent upgrade if its item level is higher than what you had, but that’s just the start. When you reach the max level, you’ll need to customize which bonus stats to give your equipment through the process of materia melding.

Unlock the true potential of your gear by melding it with materia. In this guide, we’ll show you all of your options. We’ll include information on how and where to unlock new materia capabilities for your character through quests and which NPCs can help you out without any questing. 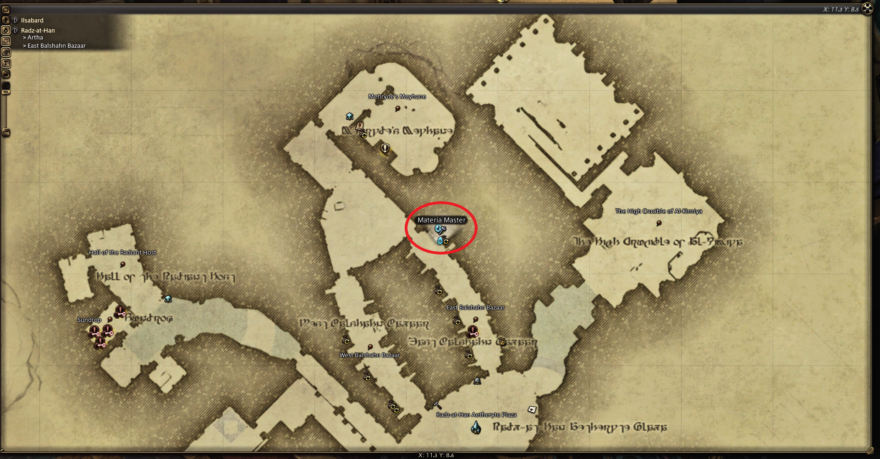 Through the use of NPCs called Materia Masters, you can place materia into your equipment’s available slots.

These helpful craftsmen can be found in Eorzea’s three major cities as well as each expansion hub area, and they’ll give away their services for a small fee that isn’t too bad either!Most of them hang out by market boards. (On more than one occasion, I’ve been too low on gil to afford melds from the NPCs. Shoutout to my static members who spot me when I’m Eorzea-broke.)

A light blue, egg-shaped gem marks them on the world map. This can help you locate those that are not near the market boards. (It’s a materia.)

The only shortcoming of these NPCs is their inability to perform overmelds. Overmelds are materia you place beyond the default slots on your gear. A player can only do this type of meld with a sufficient crafting level.

Melding Materia Yourself Through Crafting Jobs 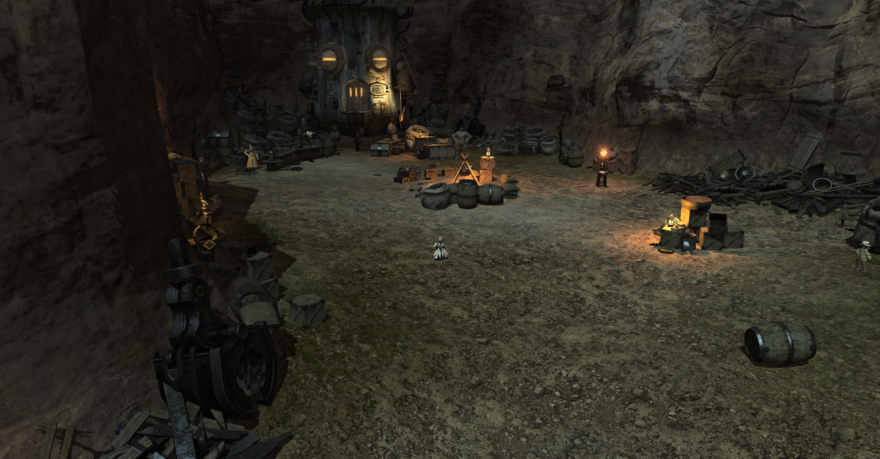 To meld Materia yourself, all you need is one Disciple of the Hand (crafting) job at level 19. Head to the camp in Central Thanalan (23X, 13Y) and seek out F’hobas. This goblin will give you a quest called “Waking the Spirit.”

Completing this quest will unlock “Materia Melding” as an action for yourself. When you select a meldable item, choose the “Meld” option that is now available.

Say goodbye to those materia NPCs! You can now meld materia to your gear with your own two hands. (As long as your crafting job’s level is high enough for the particular meld.) Doing it yourself saves you an absolute mountain of gil over time. 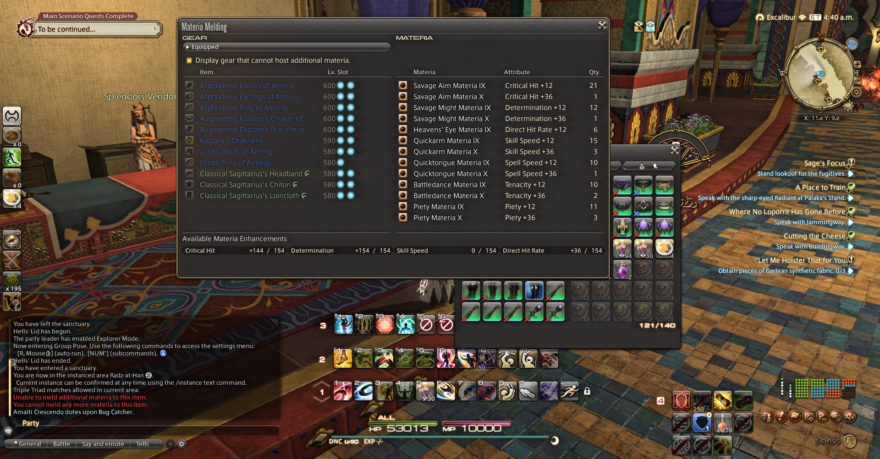 Meldable crafted gear can take more materia beyond its actual slots. This process is called Overmelding.

As we mentioned, this can only be done by players; You will also have to complete the quest “Melding Materia Muchly” from the goblin Mutamix. He hangs out in the same place as F’hobas, Central Thanalan 23X, 13Y. This quest can prove a mild challenge if you’re unprepared. Mutamix wants to watch you melt materia eight times. What a weirdo.

To satisfy his request, you can insert and remove the same single materia eight times over.

You can begin this quest at level 19, just like “Waking the Spirit”; You won’t be able to complete it until level 25. This is not a real issue as you shouldn’t need to overmeld prior to max level. (Some random quests might require you to, like the zodiac weapons.)

Remember, other players can do this for you, too. Select a friend with sufficient crafting level and choose “Request Meld.” You can even offer them a tip for their service!

Unlike basic materia melding in FFXIV, overmelds have a chance to fail. This fail chance increases the more overmelds are already present on a single piece of gear. Failing will result in the loss of your materia. Multiple attempts can really add up.

Players can go through hundreds of identical materia to successfully fully overmeld just a couple of pieces of gear. Materia isn’t cheap, particularly early in an expansion.

Once you’ve melded a piece, you may want to change its stats someday.

To remove a piece of materia, select the piece of gear and choose “Remove.” This will remove the most recent meld.

Depending on the grade of the materia, there is a chance of getting it back after removing, allowing you to meld it into something else or sell it. Anything grade IX or higher will have a chance of being destroyed when removed. (The materia, not your gear. Your equipment is never in danger.)

When to Meld Materia into your Gear in FFXIV

Materia melding lets us push our character’s abilities a little further, but don’t feel obligated to do it until you reach the endgame. While leveling, you replace pieces of gear so fast that keeping up with melds is a chore not worth the time it takes.

When you start queueing into Expert Roulette, and whichever Alliance Raid is current, you should have your gear base melded. (Fill the default slots in your gear.) Especially when we start talking Normal Raids and above, melding your equipment is not optional. You look like a massive jerk with empty slots.

Overmelding, however, is never required outside of week one savage raid pushes for world-first. If that doesn’t describe your team, don’t stress about it if you can’t afford it. (It’s always nice if you can, though.)