Anime is known for its crazy hairstyles. Creativity knows no bounds, and you often see characters donning crazy tresses and colorful coiffeur creations.

But some of these are truly stand-out hairstyles. Today, here on Nerdbear, we decide to crown the best crown of hair. Here are the best anime hairstyles to inspire you on your next salon visit. 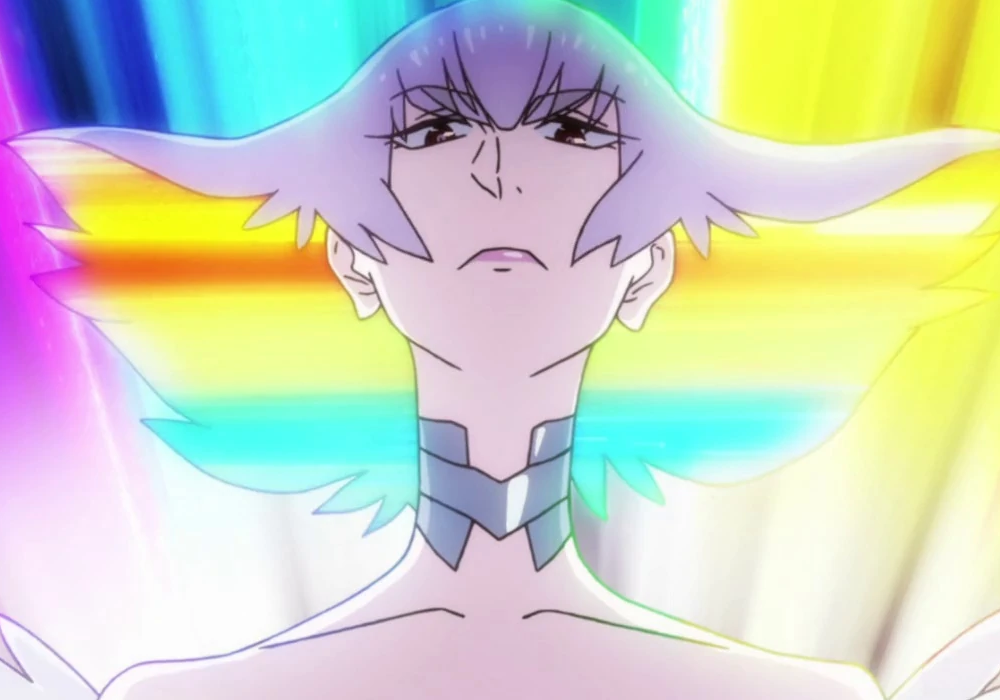 Anime characters are often known to have very colorful hair. From bright pink to aqua blue, you immediately know which characters are relevant due to their hair colors.

But why stick to one hair color when you can have all of them? Kill la Kill’s glamorous Kiryuin Ragyo shows us that you can definitely have it all.

Not only does her presence command authority, but her hair is also glorious to behold. While the top and outer color is silver, the underside is an array of rainbow colors. 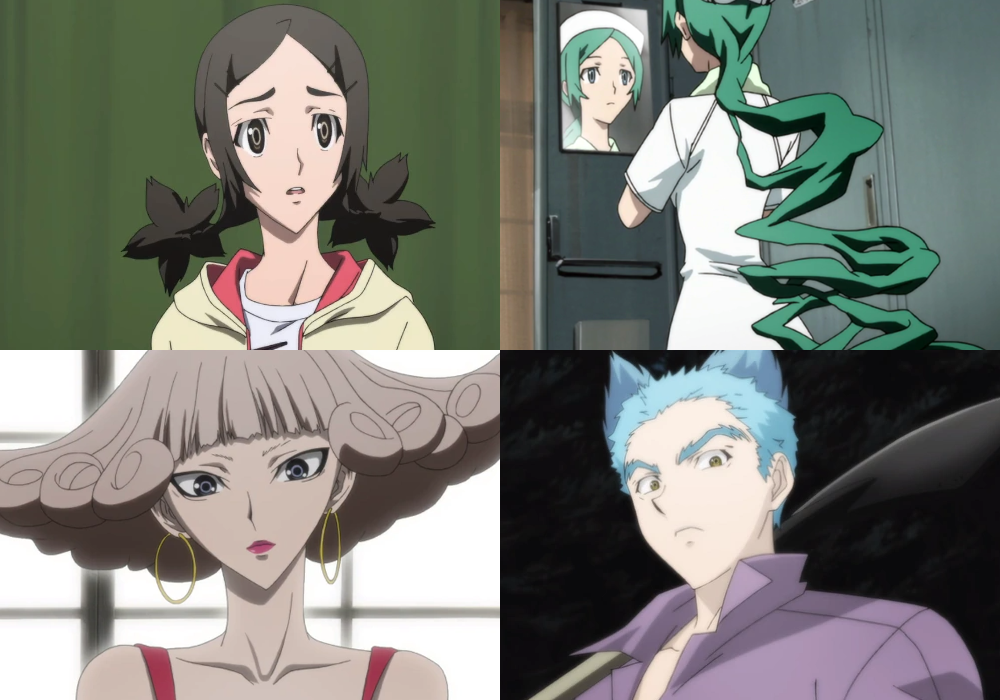 Now, if you’re looking for truly unique and wacky hairstyles, you’ll have a plethora of choices from the series Shiki.

What makes it unintentionally amusing is that Shiki is far from being a comedy anime, yet the hairdos are zany and ridiculous.

The show deals with a town harboring mysterious deaths, and you slowly uncover the terrifying reason bit by bit.

Ludicrous hairstyles in a hair-raising story? Count us in! 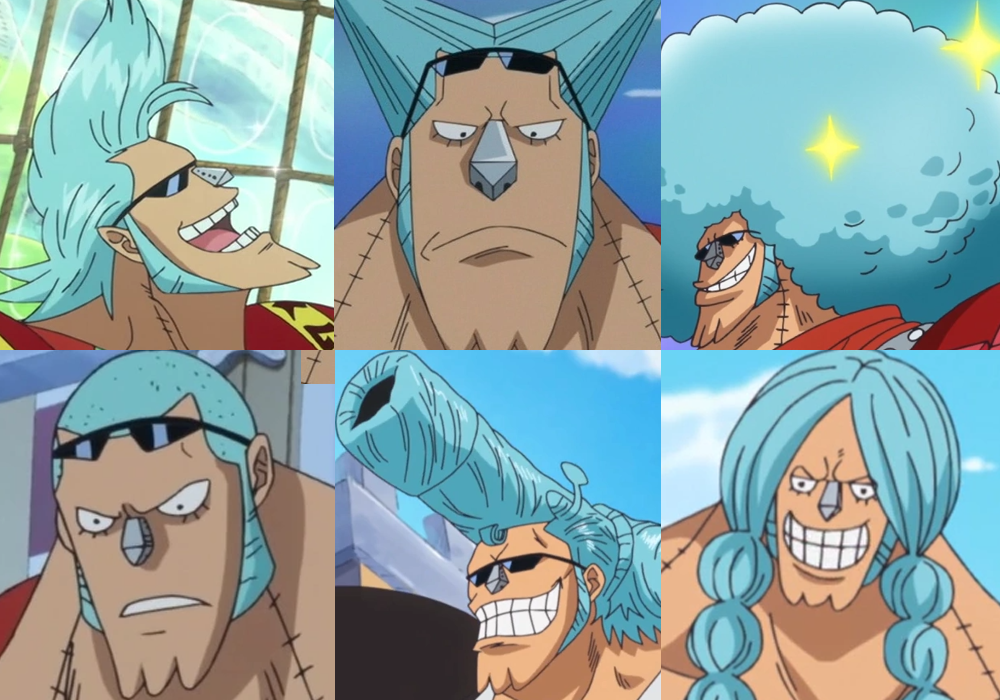 Franky has modified himself numerous times over the years. These are either for important battle reasons or just because.

Thanks to his Franky Hair Salon feature – which is totally important, by the way – he can change his hairdo on a whim!

To change his hair, he simply presses his nose like a button. His entire hair will pop out, which he can then style in different ways.

According to One Piece creator Eiichiro Oda, Franky can do an infinite number of hairstyles!

What a great upgrade. Imagine – instant haircuts and no more hair salon trips! 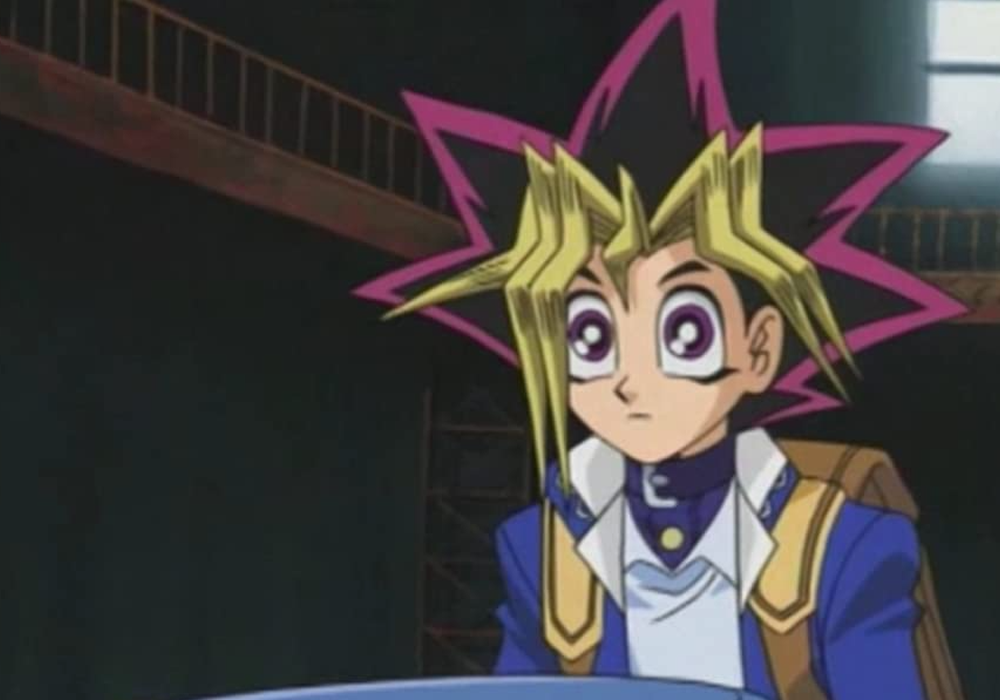 No one exactly knows why Yugi Muto’s hair is the way it is. Sure, he gets his bangs from his grandpa, and his mom has dark hair. But none of them look any way similar to Yugi’s.

Let’s not fret about Yugi’s genealogy anymore and focus on his uniquely bizarre hairdo instead. He’s the only character in the series with such an extravagant style!

His bangs or fringes are pointy, and his back hair has five huge spikes. All in all, his hair has three different colors – blond, black, and magenta.

Even Kaiba isn’t this extravagant, hair-wise! 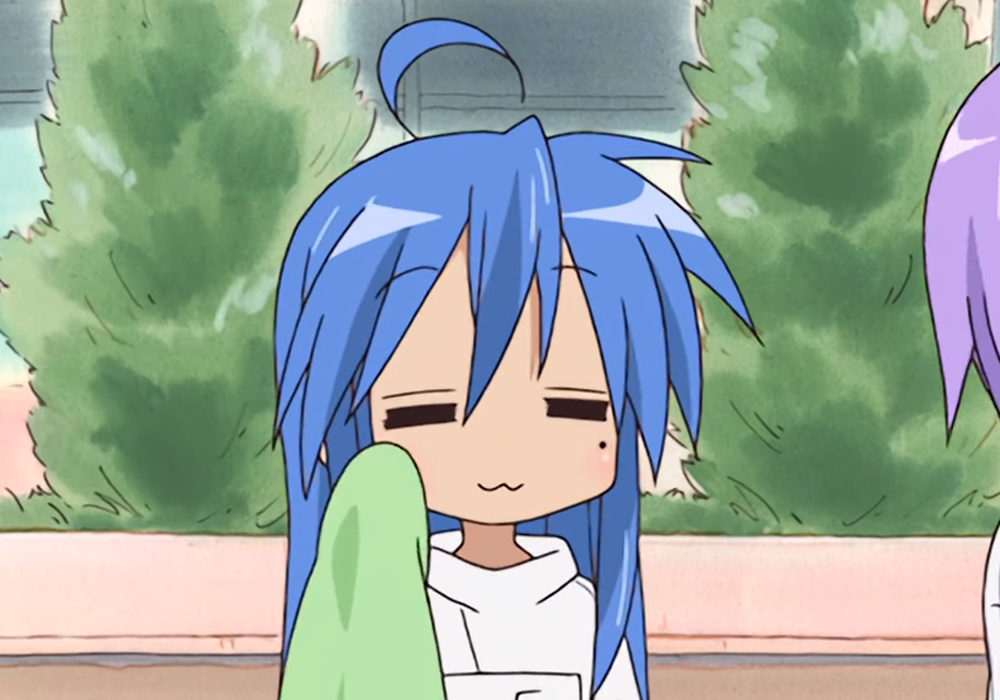 Let’s go back to the basics and appreciate the simple hair details some anime characters have.

Do you know that strand of hair that sticks out? Yup, that’s what you call an ahoge! It’s basically an exaggerated cowlick that can be used to convey a character’s cuteness or personality.

It can be literally translated as foolish hair since it started as a trait to show cute airheadedness. Nowadays, an ahoge can simply be a cute hair detail.

For a classic example of a character with an ahoge, we present Izumi Konata from Lucky Star.

She’s not exactly an airhead, and she’s pretty witty with her jokes, but she dislikes studying! 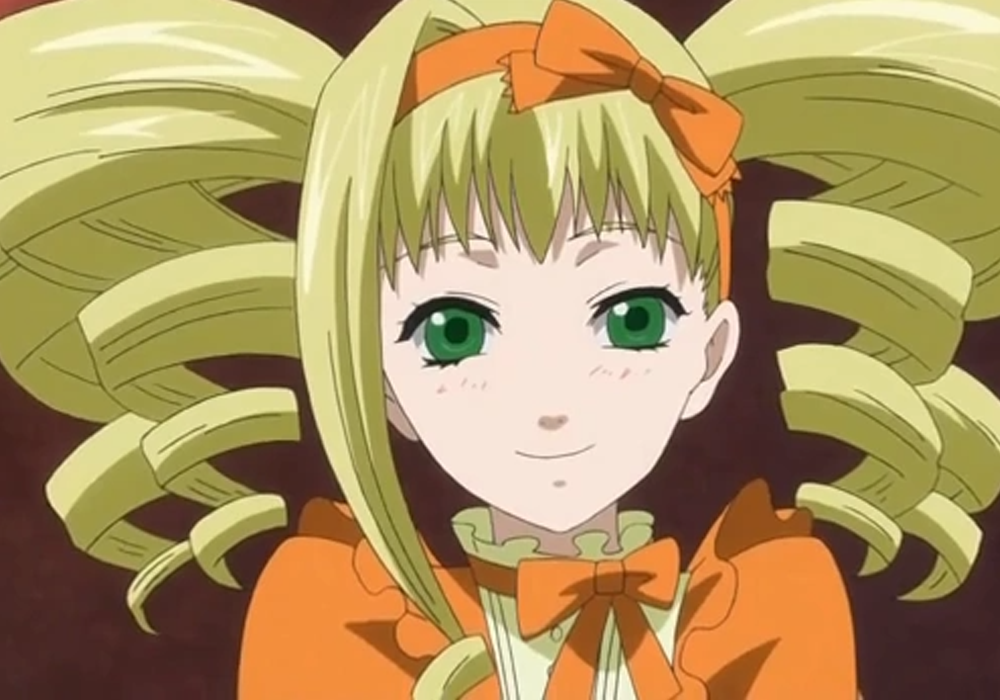 Another anime hairstyle staple is the hair drills. There are a lot of popular and iconic anime characters with this style.

We picked Elizabeth from Black Butler for this entry since she checks almost all the hair drill characteristics.

You often see hair drills in characters with an air of royalty, class, and fanciness.

Most of the time, these characters wear full dresses, like gowns or in lolita fashion. Bonus detail: the “ohohoho” laugh! 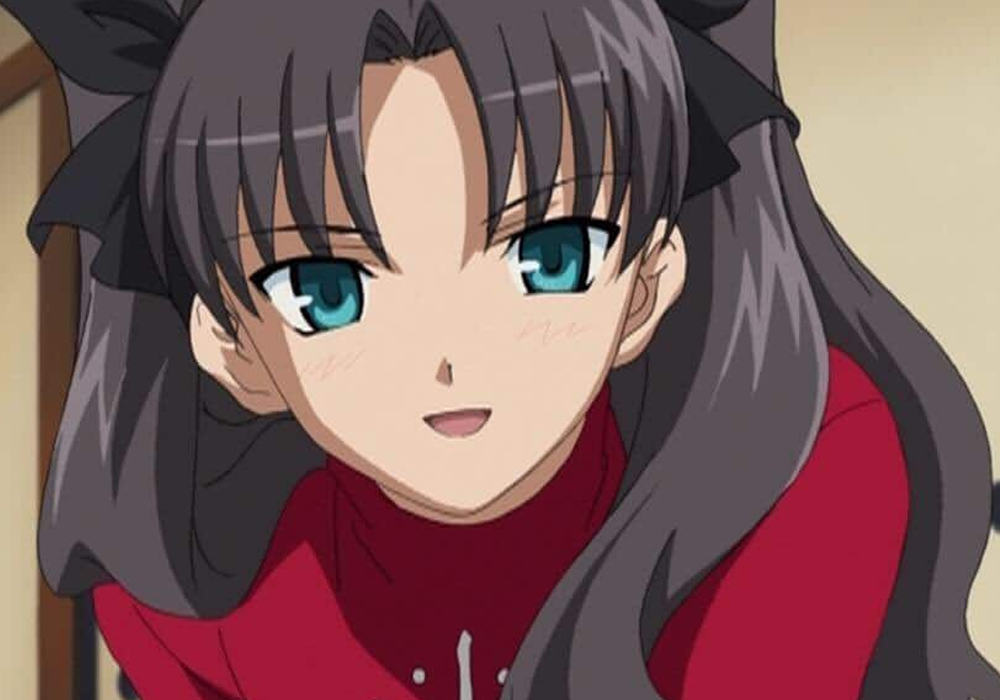 If we’re talking about anime hairstyles, we definitely can’t skip the classic and highly popular twintails!

Over the years, a lot of characters with this hairstyle often show tsundere tendencies.

This is why we picked Tohsaka Rin for this entry. Twintails? Check. Tsundere? Yep!

We don’t exactly know the correlation between the hairstyle and the character type, but hey, it works! 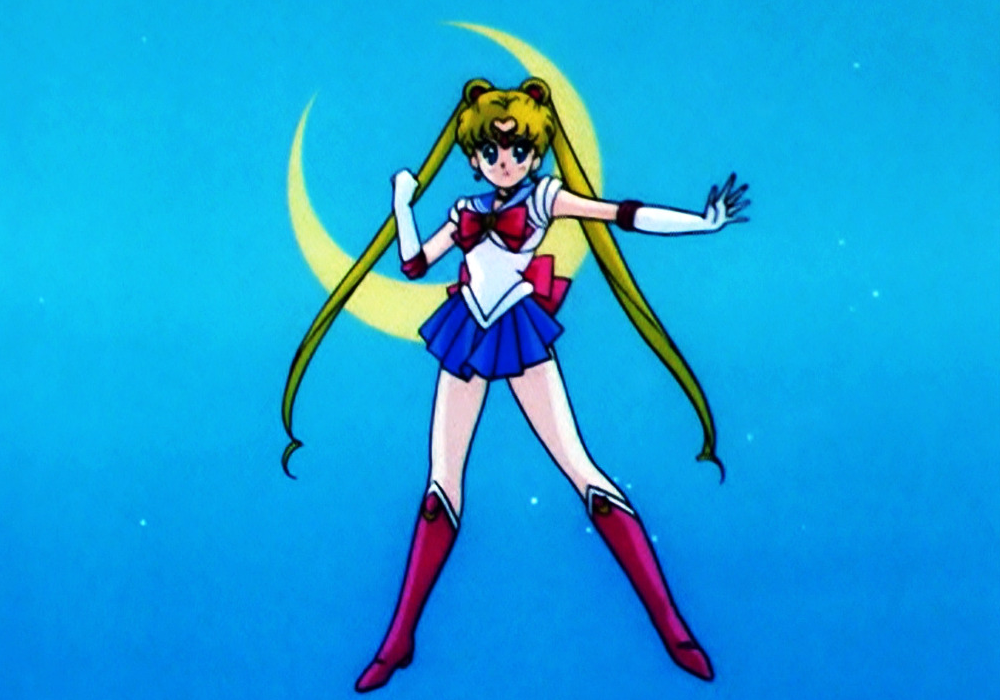 When it comes to twintails, we definitely have to include another entry for it. For this isn’t just a simple twintail, no – this is advanced twintail!

Kidding aside, Usagi’s Sailor Moon twintails is definitely an icon. It’s not just a twintail, but you get hair buns on top of the twintails too.

Make anyone have this hairstyle, and chances are someone will point out that it looks like Sailor Moon’s hair! 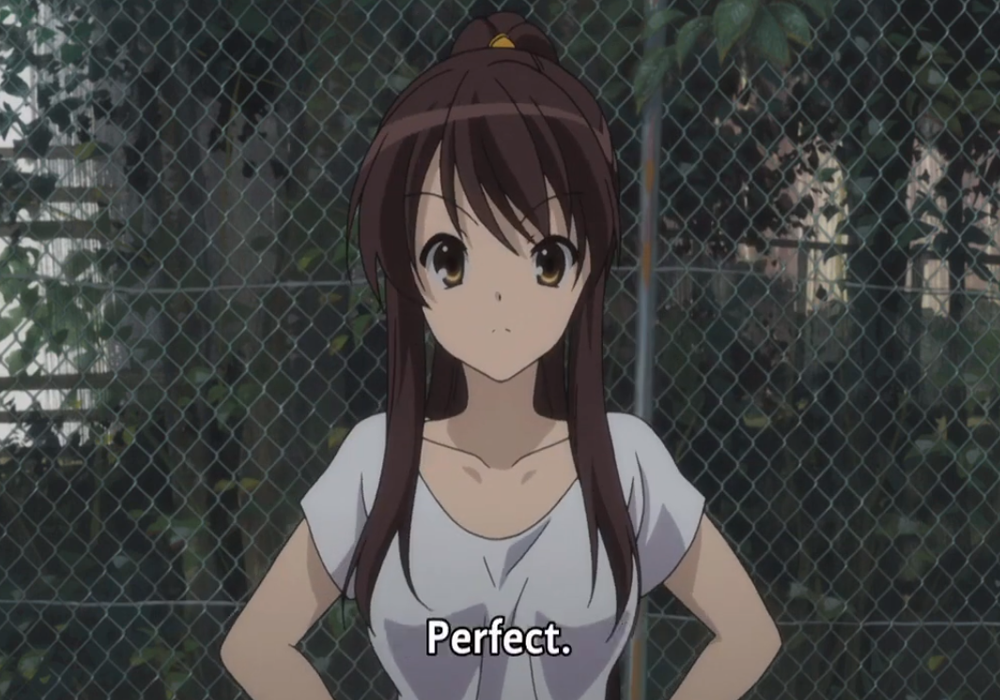 We’re done with two tails, so how about a singular tail?

The ponytail is a simple yet classy hairstyle that brings out the character’s nice facial features. With bangs and extra hair to the sides, it can frame a face really well!

For this entry, we’ve picked the best character for it.

In the series Haruhi Suzumiya, Kyon managed to calm Haruhi by declaring that he likes ponytails and he thinks she looks great with one! 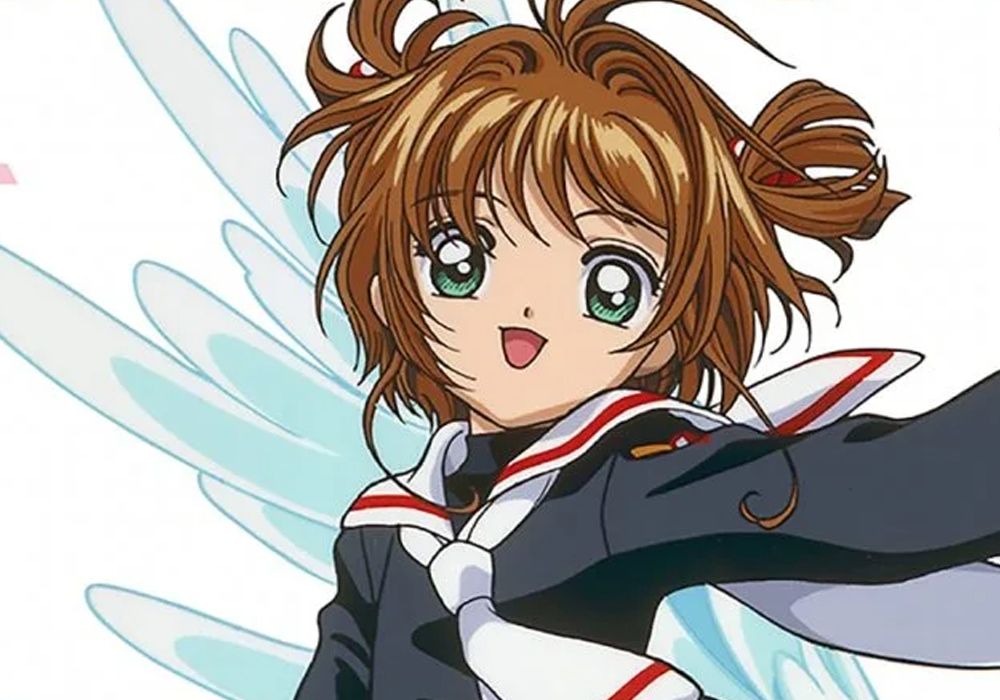 There are a lot of great short hairstyles in the anime sphere. Sailor Mercury’s classic bob is one, Mio from K-On sports a cute style, and there’s the fearsome Mikasa with her short hair too.

But for a unique short hair that isn’t really replicated anywhere else, we gotta hand it to Cardcaptor Sakura’s short do.

It’s a really short bob with lots of layers and a fluffy fringe. She also has extra dangly hair at the front. 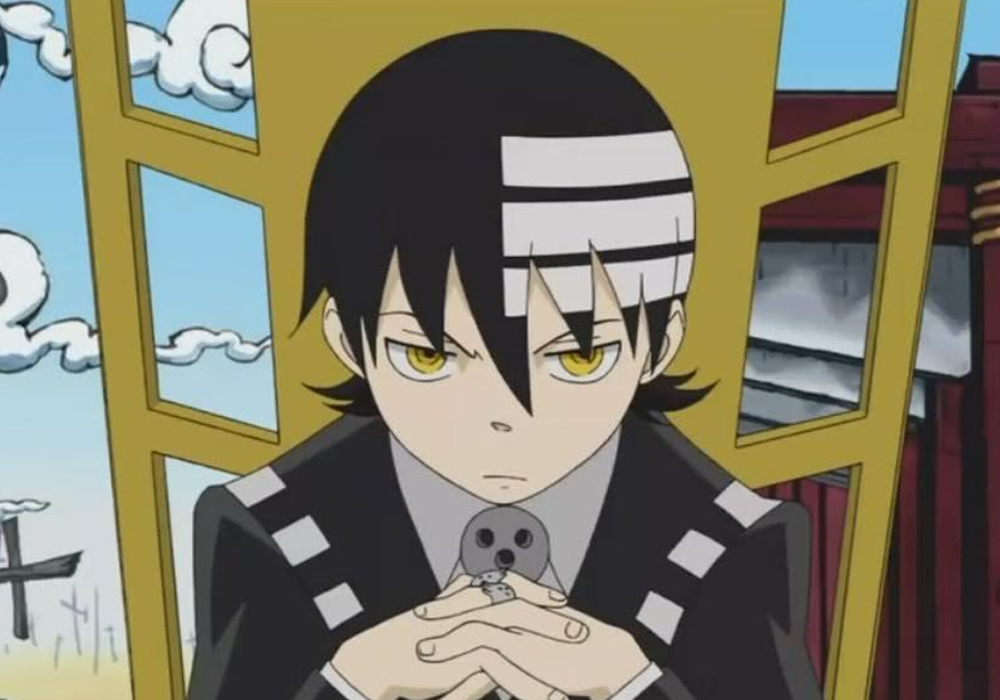 Speaking of uniqueness, let’s venture to the asymmetrical side of things and feature Death the Kid’s uneven hairstyle.

At first glance, his hair might look simple and plain. It’s just a short black cut with a bit of a jagged fringe.

But see those three white lines on the left side? Yep, that’s what makes his hairstyle unique!

It’s a bit of a spoiler, but the short and vague answer is it’s related to who he actually is!

7. Half & Half Hairstyle – Todoroki Shoto (My Hero Academia) 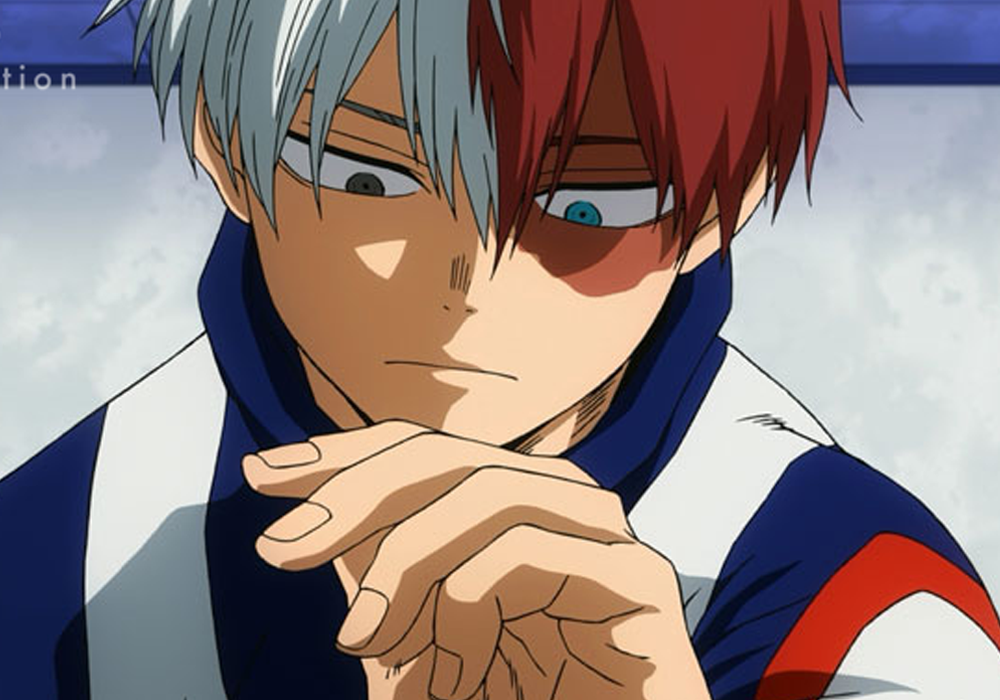 Let’s continue the asymmetrical train and feature Todoroki’s half and half hairstyle!

While Todoroki’s hair is parted very equally, both sides have different colors. One side is white, while the other is red.

Todoroki is definitely not the first anime character to have this style, but what makes him stand out is how it’s related to his story and character.

Due to how his father wanted a child inheriting both fire and ice powers, Todoroki was born. The hair colors stand for this duo of powers. 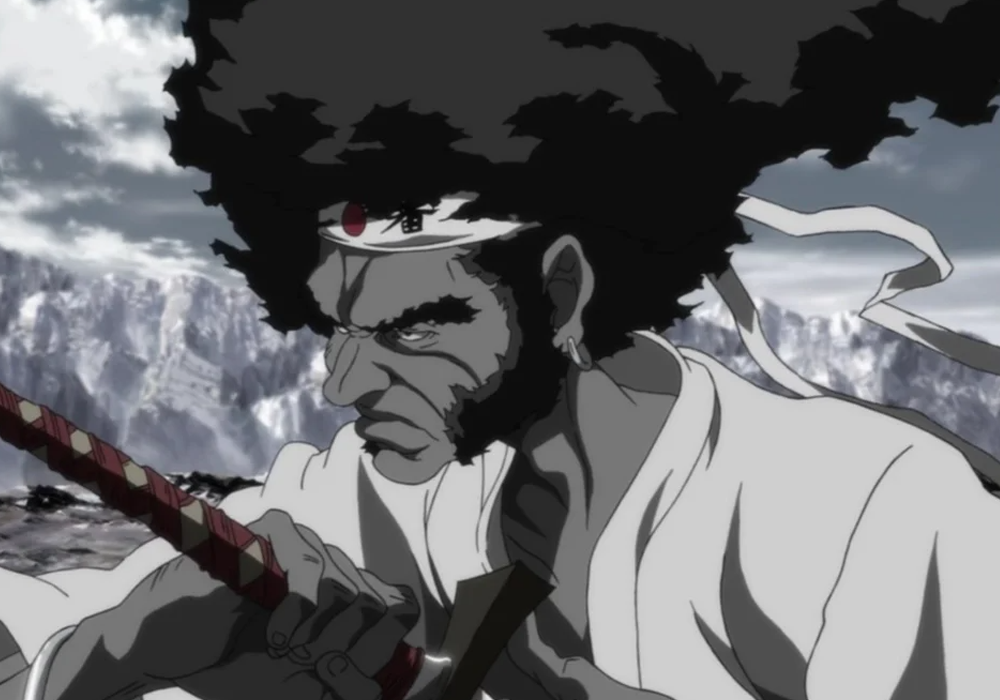 Afro Samurai has quite the presence in his character. You can feel the weight and intensity in every step. The drive to his goal is there!

But it’s not just his presence or sword skills that are impressive. His afro hair is majestic to behold too!

Set in a futuristic feudal Japan, a samurai goes on a journey to avenge his father. If you’re looking for a samurai-themed anime that focuses on action, you’ll enjoy this one.

And you’ll enjoy his hairstyle too! 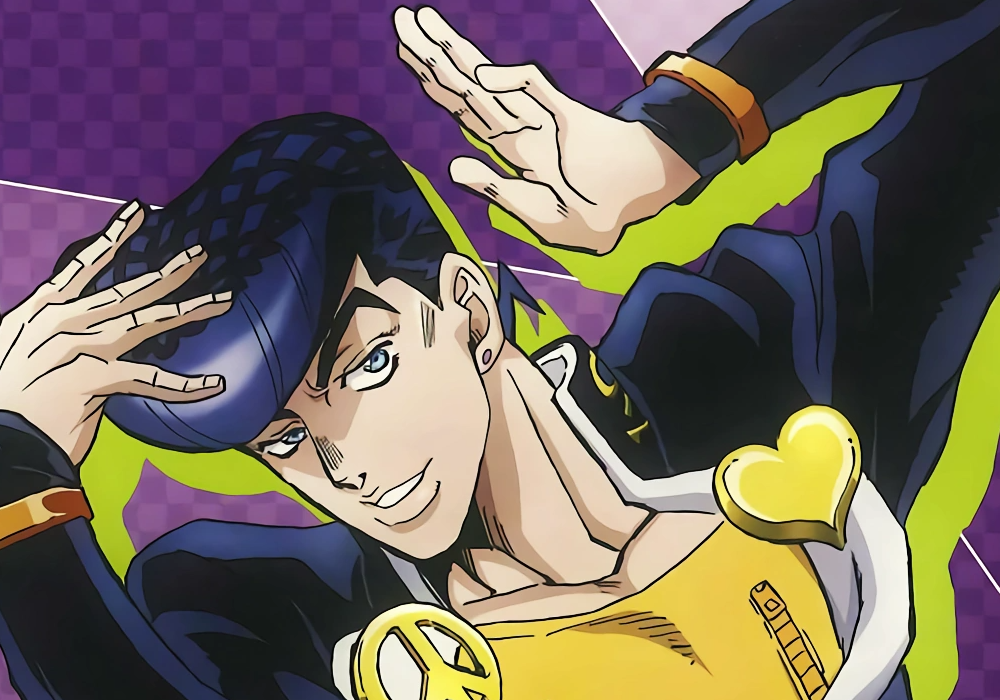 Ah, the pompadour. It’s big, it announces its presence, and it’s definitely a classic in anime.

Over the years, we’ve had a lot of pompadour-donning characters. We have Ryunosuke from Shaman King, Space Dandy’s Dandy, and Kuwabara from Yuyu Hakusho, to name a few.

But the character that definitely revived and popularized it in recent years is Josuke from JoJo’s.

His big pompadour definitely fits well with the series’s outlandish characters and Stands! 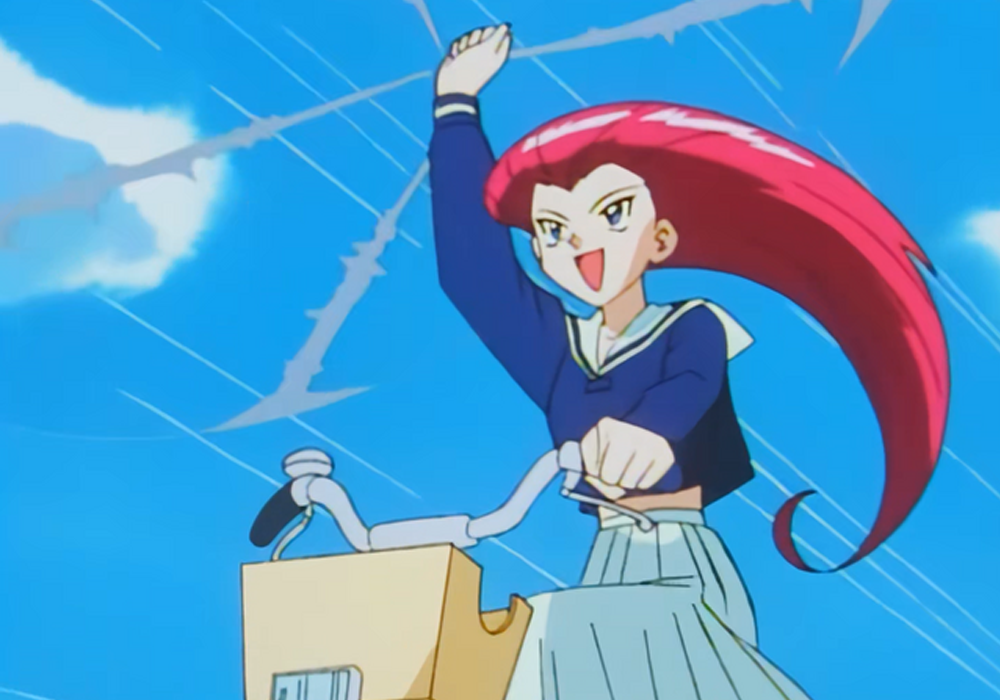 We’re featuring another big hair at number four. But this time, it goes all the way back!

It’s hard to describe Jessie’s hair. Sure, it’s long and red, but it’s not the typical long hairstyle. It’s slicked back and has its own curve.

Some people have described it as a long comet tail hair. That’s honestly perfect since Team Rocket is always blasting off into the skies! 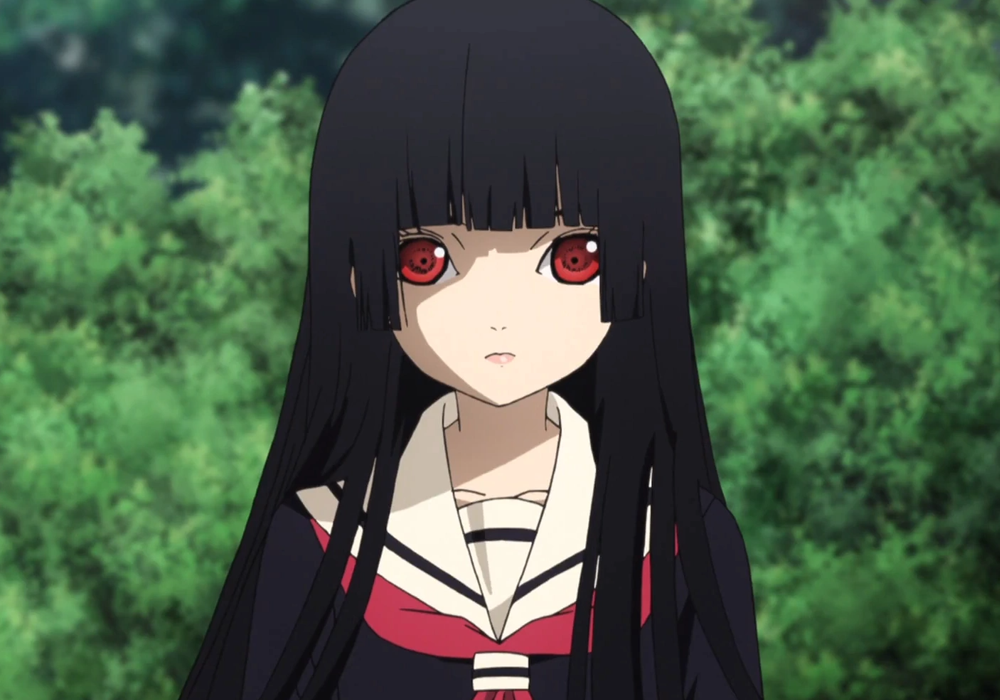 If you want to see a proper long anime hair, you’ll be delighted with our number three entry. We’ve even added the princess or hime cut into the mix!

Like a lot of hairstyles featured here, there are a lot of variations for long or hime cut hair. However, one of the most iconic characters donning this style is Enma Ai.

With her piercing red eyes, silent gaze, and reserved persona, her long hair and hime cut fringe add to her intimidating presence. 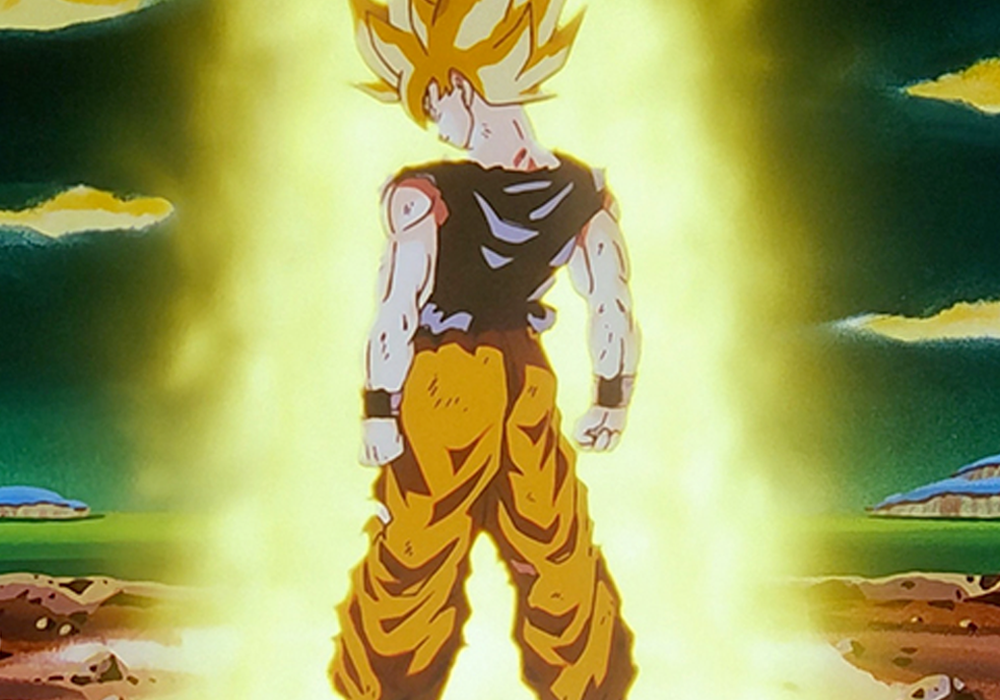 Powering up in anime is a trope as old as time. But what makes the powerup in Dragonball unique is how it changes the character’s hairstyle too.

Not only is it iconic and a masterful way of character design, but it also showcases the point of powering up really well.

The hair color drastically changes and goes up, signifying a big transformation.

It definitely hyped up a lot of fans when it happened! 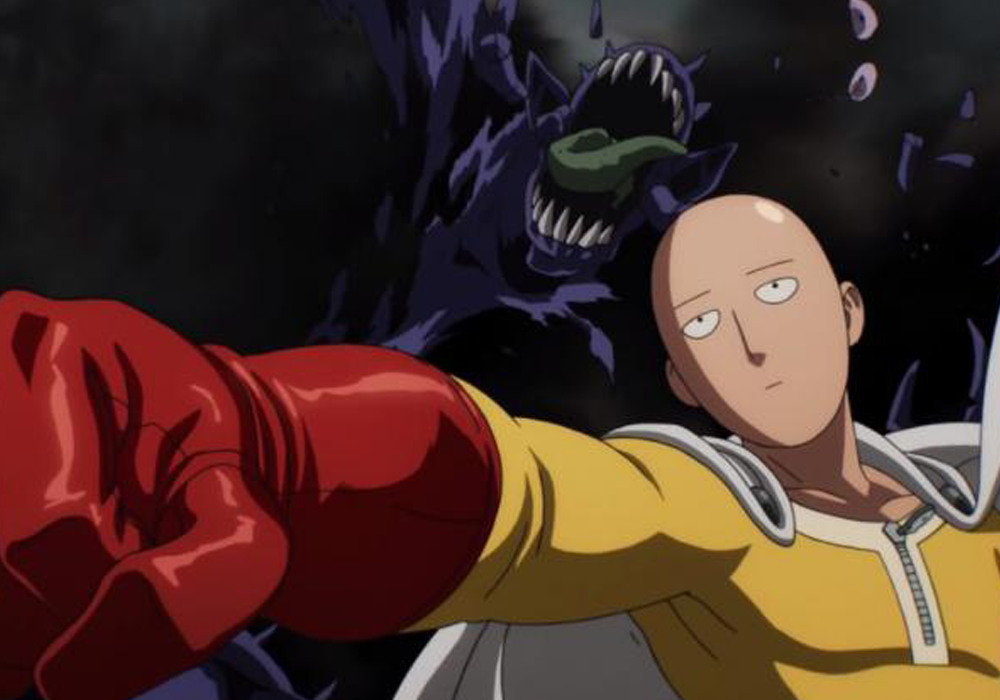 Can we get a drumroll for our top hairstyle? Just… don’t drum on the head, please.

And for Nerdbear’s pick for the best anime hairstyle of all – shining at number one is Saitama’s bald head!

Amidst a lot of impressive hairstyles, it was difficult to pick the best one. Ultimately, we decided that the freedom of the bald style is the best there is. It’s freeing and shows a fountain of confidence!

Plus, Saitama’s baldness tells a tale about his hard work. Good for you, Saitama!