Anime is filled with jawdropping sword fighting scenes with equally cool swords held by equally impressive characters. But, while admiring these amazing weapons, we wondered which ones were the best of the best.

So while you’re out there living your best life, we studied the blade. We pitted many anime swords to come up with 15 of the best ones.

Ready your sword stance as we hack and slash our way through this listicle. We present the best anime swords ever! 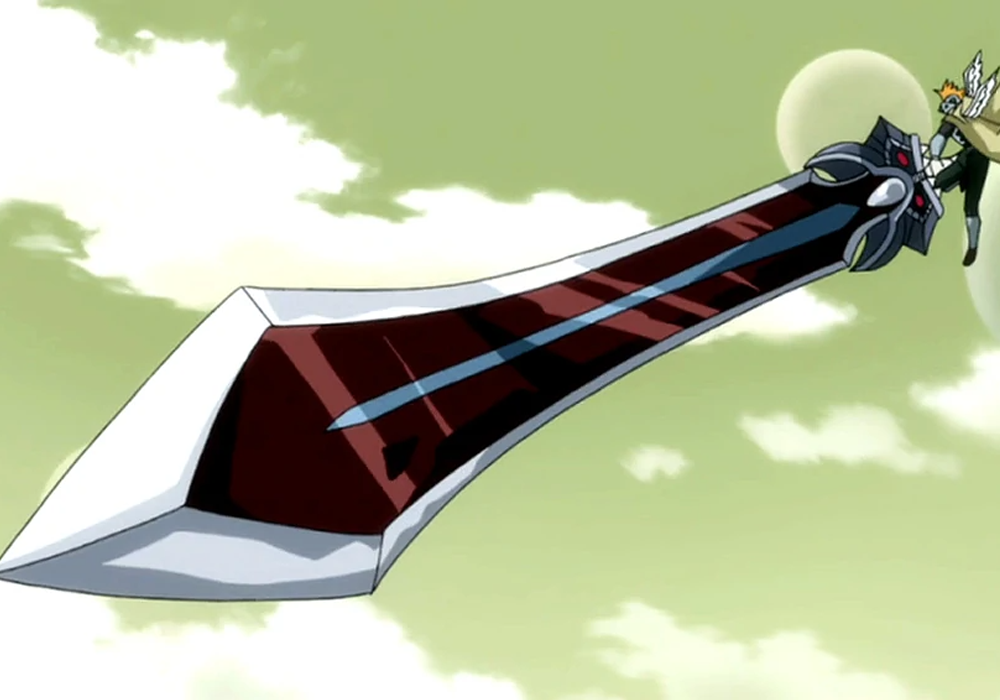 Fairy Tail’s Bustermarm is a gigantic sword and an Edolas Magic Item.

Its size is estimated to be roughly four times its user and has straight and double-edged blades. It was held by Panther Lily.

A notable detail on the sword is the hand guard. It’s a large feline head with glowing red eyes, huge teeth on the hilt, and protruding ears. The details are as menacing as the sword’s overall size!

Unfortunately, its impressive size didn’t stand a chance against Gajeel Redfox, who shattered it to pieces with his Iron Dragon’s Scales. 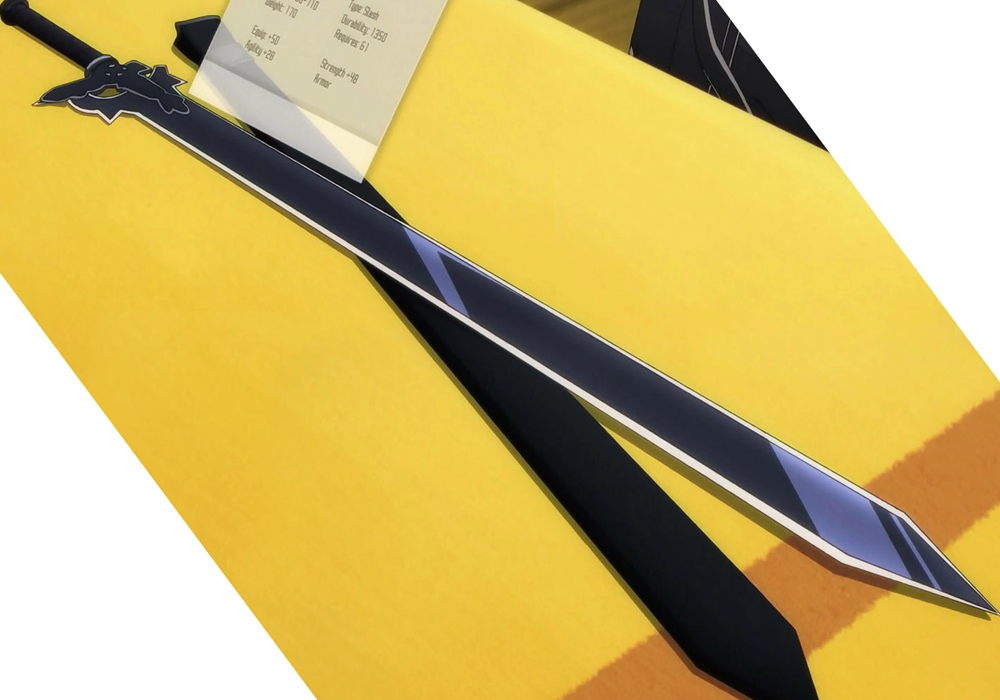 Kirito’s primary weapon gets a slot here in our list! Meet the Elucidator, a sword that came from a demonic monster drop from a 50th-floor boss battle.

It looks really cool, with its pitch black finish and gray trimming. Its handguard is asymmetrical, with the right side missing. As an added cool detail, there’s a cross marking on the tip of the sword. 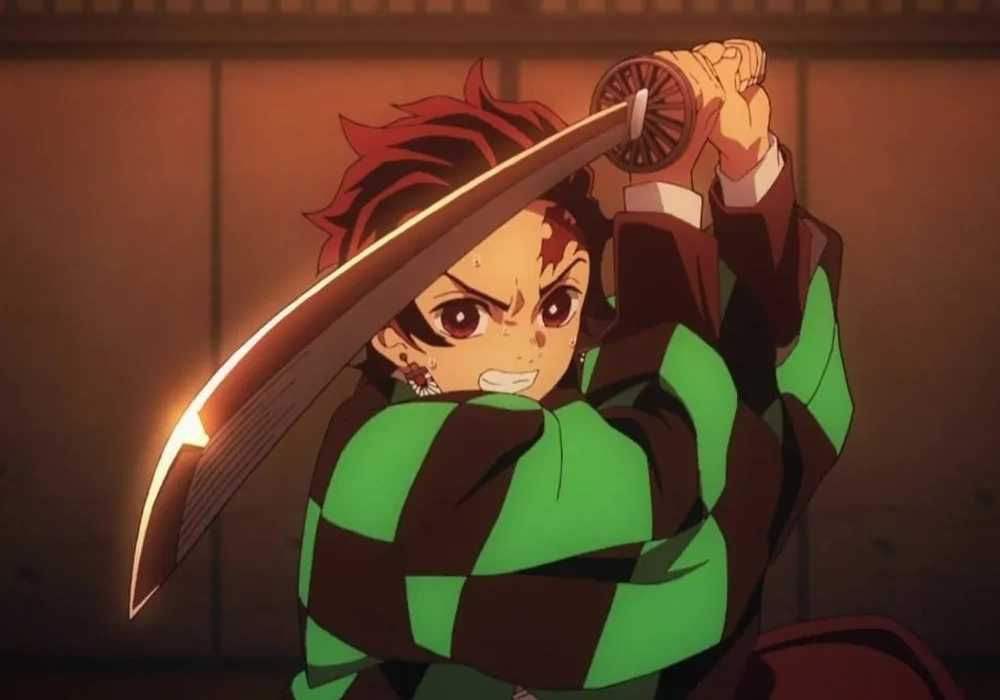 Demons are a tricky bunch in Kimetsu no Yaiba. You definitely need a special weapon to defeat them easily.

Enter the Nichirin Swords. These are weapons that the Demon Slayer Corps get after surviving the Final Selection test.

To make it, the wielders have to choose a special ore to mix with sand.

Once the sword’s owner wields it for the first time, it’ll change color to indicate the power of the wielder.

Some swords, like Zenitsu’s, get a lightning pattern. Others, like Rengoku’s, have flame details. Protagonist Tanjiro, unfortunately, gets a jet black sword, indicating a bad omen. 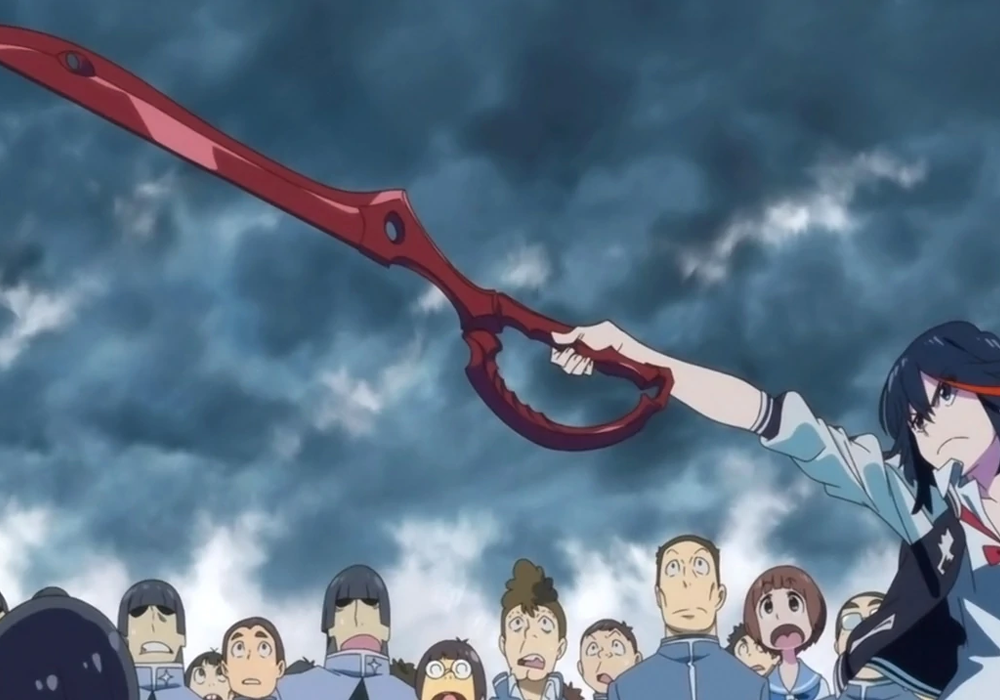 To cut clothes, you gotta have sharp scissors! In Kill la Kill, the world is overcome with Life Fibers – a parasitic organism that is the origin of all clothing in the show.

If you want to cut them, you have to have Scissor Blades.

When you fuse two Scissor Blades, they become Rending Scissors, which is a stronger weapon that can sever Life Fibers and stop its regeneration. 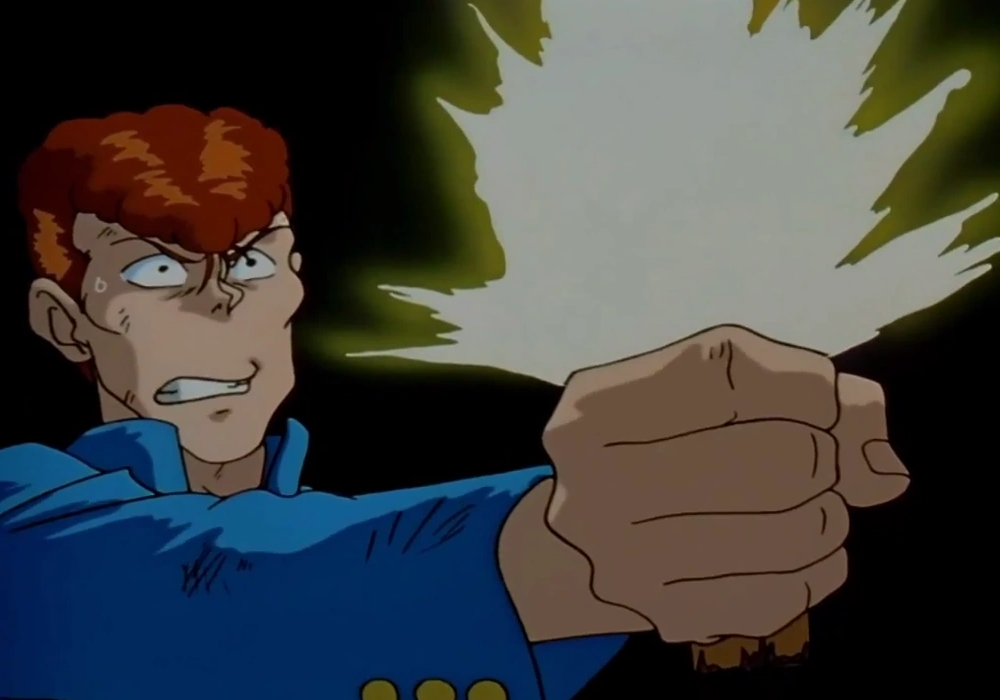 This sword doesn’t need metal or forging. It is created using spirit powers and fire energy! For that alone, it gets the 11th spot on our list.

Kuwabara accidentally discovered and activated this power when he was scrambling to defend himself against an enemy.

Fearing he’ll lose, he picks up a piece of the enemy’s broken weapon and wields it to defend himself.

What came out of his hand was a blast of spirit energy in the form of a sword instead! This became his signature weapon, the Spirit Sword.

Later, he improved it and made it stronger in the form of the Dimension Sword. 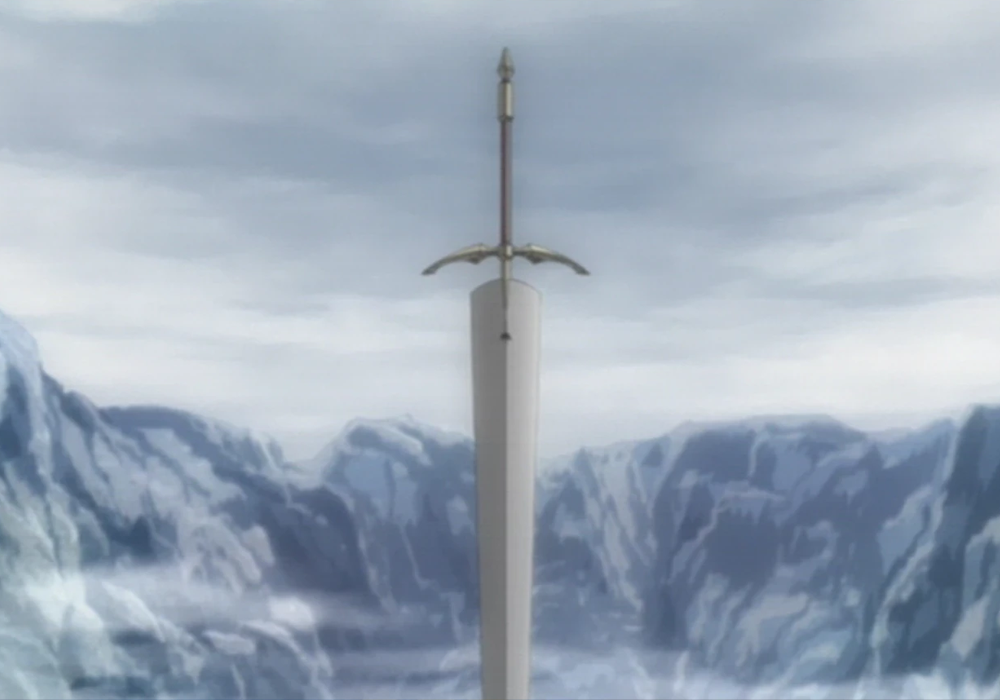 The half-human warriors of the series called Claymores are named as such due to the weapons they wield. In Scottish Gaelic, claymore means great sword.

The claymore swords in the show get special details, depending on who wields them. There are usually personal symbols etched on it.

Depending on the user, it can also get different colors. Defenders have green claymores, while offensive users have red. Blue claymore handles are swords that are single-numbered.

You’ll never see a Claymore without their claymore. Aside from combat, they use it for chopping wood or hunting. When they die, it is used as a grave marker. 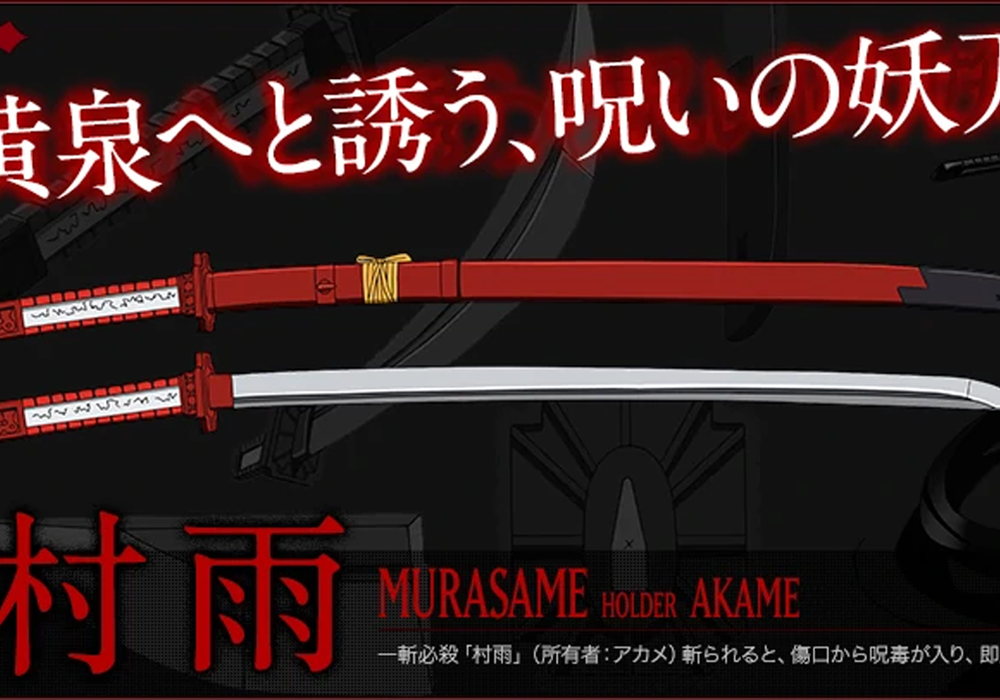 This cursed blade is as deadly as it looks. It is known as Murasame or the one-cut killer blade!

When it pierces your skin, it immediately gives you a poisonous curse that can instantly stop your heart. Markings will show on your body, indicating the deadly curse.

The blade is so sharp and deadly that even Akame, its wielder, has to be careful when cleaning it. Scary! 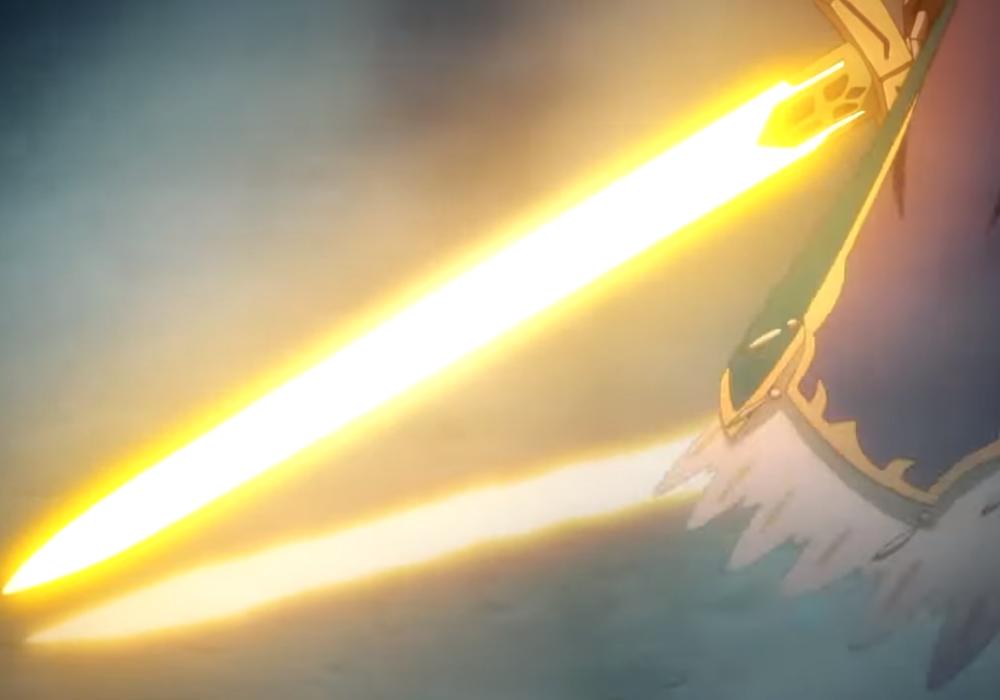 The Fate Series creatively weaves real history, myths, and legends into its story. And when you have King Arthur joining the fray, you definitely have to include the legendary sword Excalibur.

In the series, the sword was crafted by six great Fairies to protect the world from threats. It is formed from the crystallized wishes and hopes of mankind.

It was then given to King Arthur and symbolized the heroism and ideals needed to protect people.

In the series, King Arthur is portrayed differently throughout the story, but most popularly by Saber. 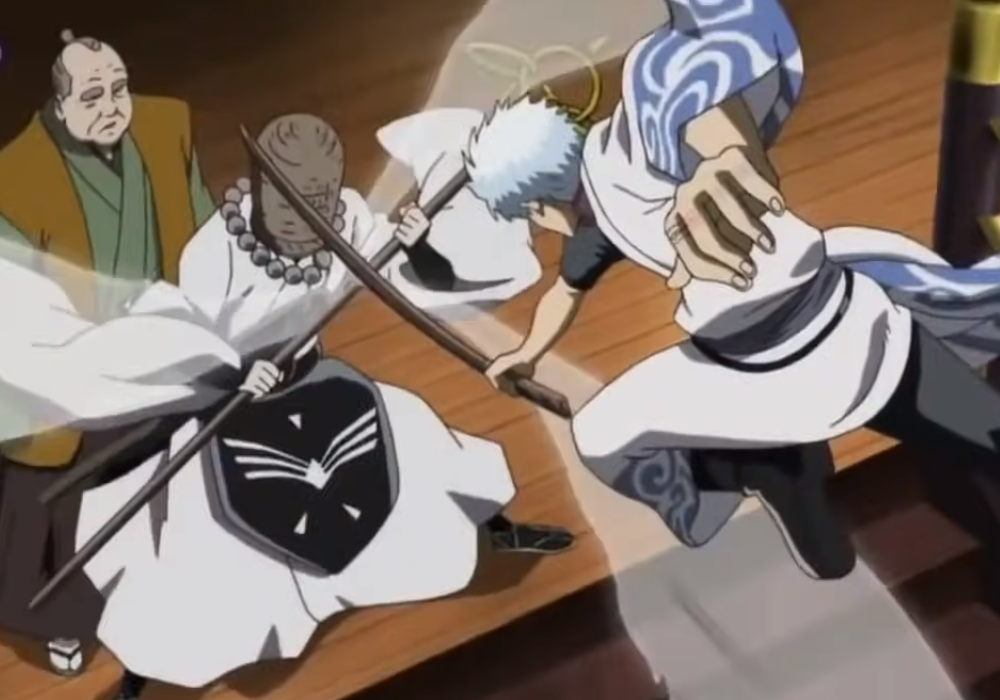 This isn’t your ordinary anime sword. Unlike others in this list, the Toyako Bokuto is not made of metal but is crafted with wood. It is also a bit silly.

Gintoki gets around the ban on regular swords by using a wooden one.

A regular gag in the series shows him rebuying it from a TV shopping channel whenever it breaks.

The only constant thing is the inscription “Lake Toya” he puts on all of them.

He hypes it up by saying it’s made from a ten-thousand-year-old tree. Whether that’s true or not, the Toyako Bokuto can cut through almost anything.

It also has a spirit living in it called Toyako! 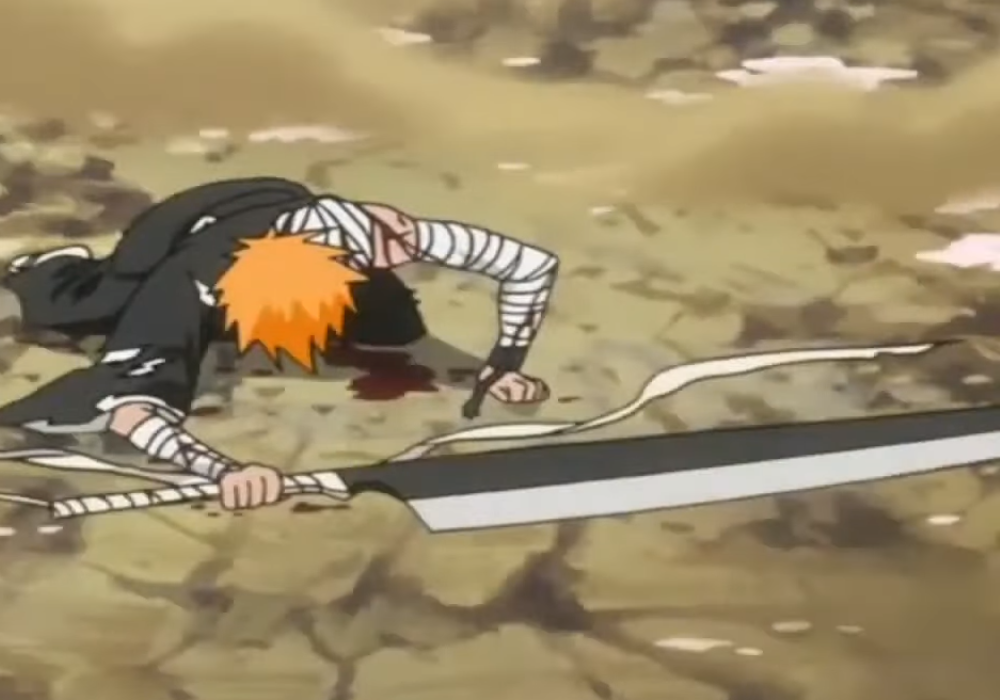 In Bleach, the Shingami, Arrancars, and the Visored can manifest a weapon from their souls. These are called Zanpakuto. Ichigo’s Zanpakuto, however, is a bit more special.

His mom was bitten by a Hollow called White and underwent Hollowfication. His dad is a Shinigami.

With those powers combined, Ichigo’s Zanpakuto, called Zangetsu, can take on different forms and is one of the most powerful weapons in the series. 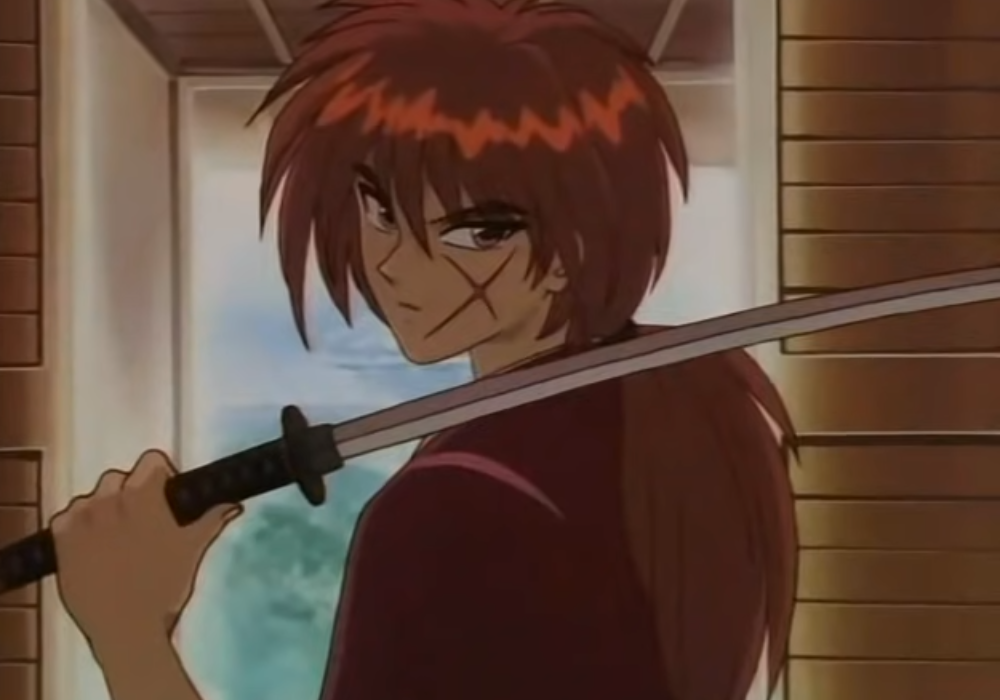 The Sakabato is one of the most unique anime swords to ever exist. Although it looks like a simple katana, its sharp blade is on the opposite side instead.

To honor the peace promised by the arrival of the Meiji Era, it was crafted with the idea of not killing your opponents.

This fits perfectly with Kenshin’s new path in life, which is to never take a life again. 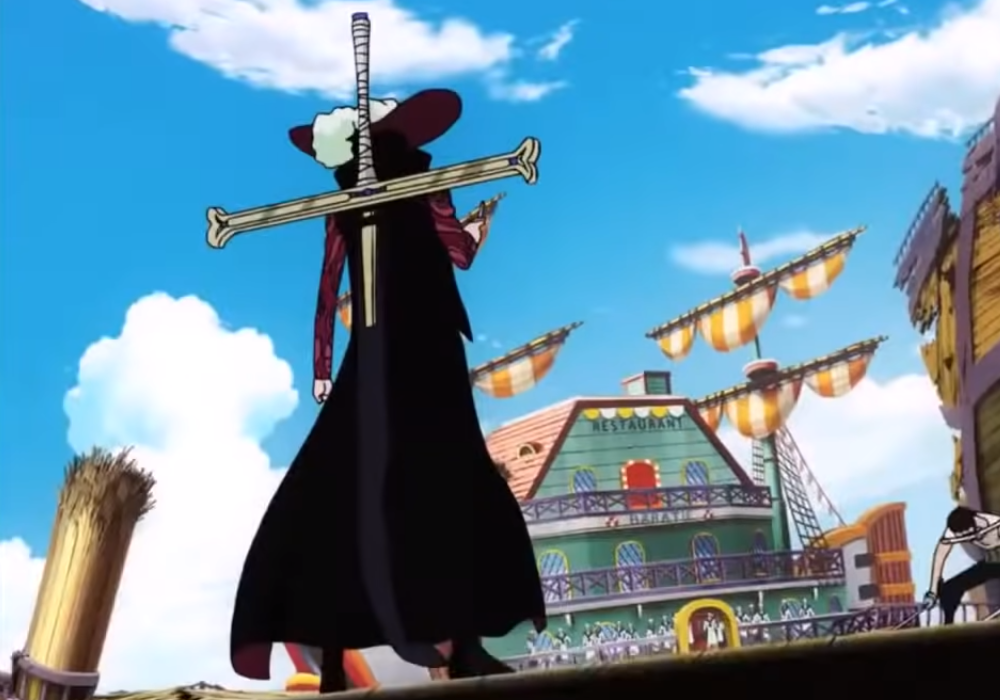 More unique swords, you say? How about a cross-shaped one wielded by a guy named Dracule Mihawk?

It is ornately designed, with gems on its hilt and a curved black blade that resembles a messer.

It doesn’t have a sheath, so it just hangs on Mihawk’s back, making it look like a cool oversized cross. It fits his Dracula aesthetics pretty well! 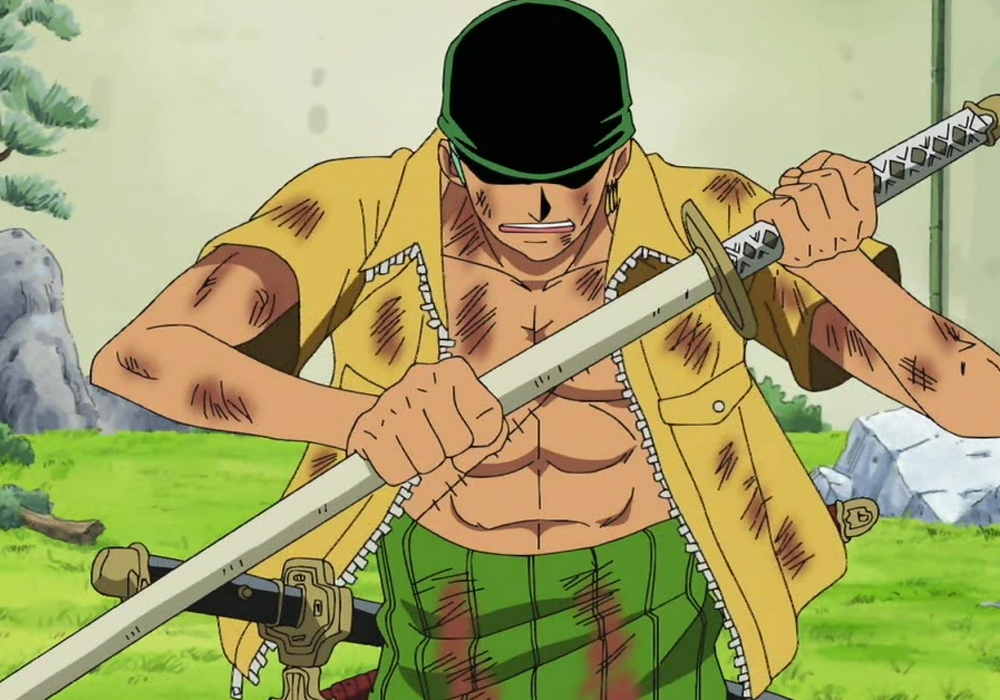 As a great swordsman in the series, Zoro has wielded a lot of swords –  a total of seven, in fact! But the one that he arguably treasures the most is the Wado Ichimonji.

The history of the Wado Ichimonji is a sad tale for Zoro. His childhood friend and sword rival, Kuina, unexpectedly passes away.

To fulfill his promise to her of becoming the best swordsman in the world, he asks for this sword from his teacher, who is also Kuina’s father.

It turns out that Kuina’s grandfather, who forged the sword, is a legendary Wano swordsmith, making the Wado Ichimonji one of the most powerful swords in the series.

It is the only sword in Zoro’s possession that didn’t shatter when he fought against Dracule Mihawk! 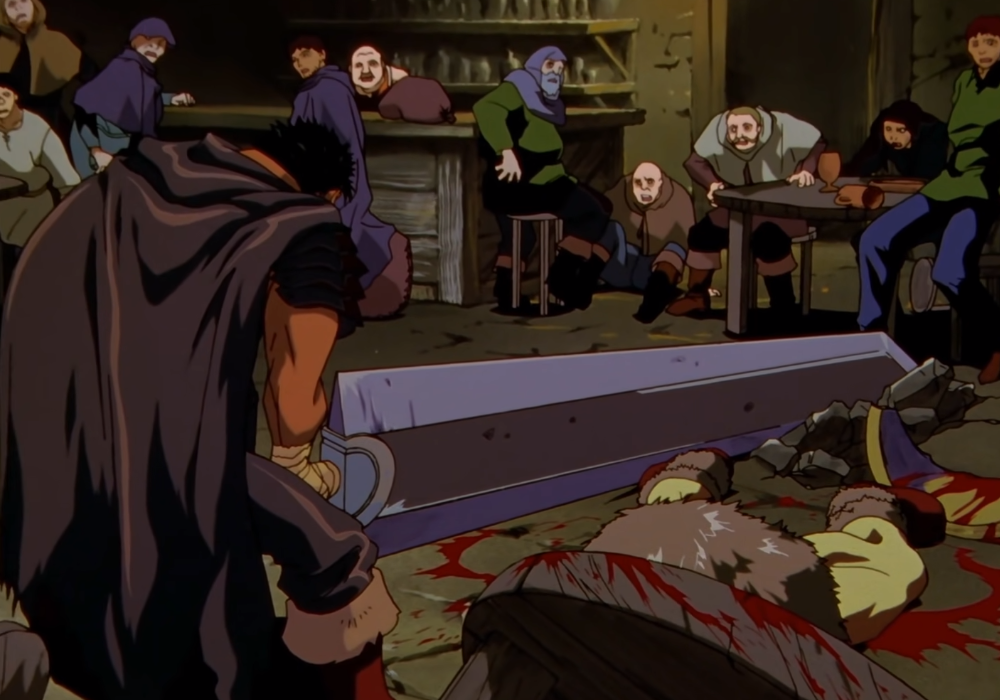 At number two, we have Guts’s huge sword, the Dragon Slayer!

The story describes this sword best. It is said to be too heavy, too massive, and too thick.

With its crude and primitive design, it looks more like a slab of iron.

This sword was created to slay dragons, just like what its name says.

The blacksmith responsible for it was tired of making showy weapons with ornate details for nobles and instead focused on a weapon that does what it says on the tin. 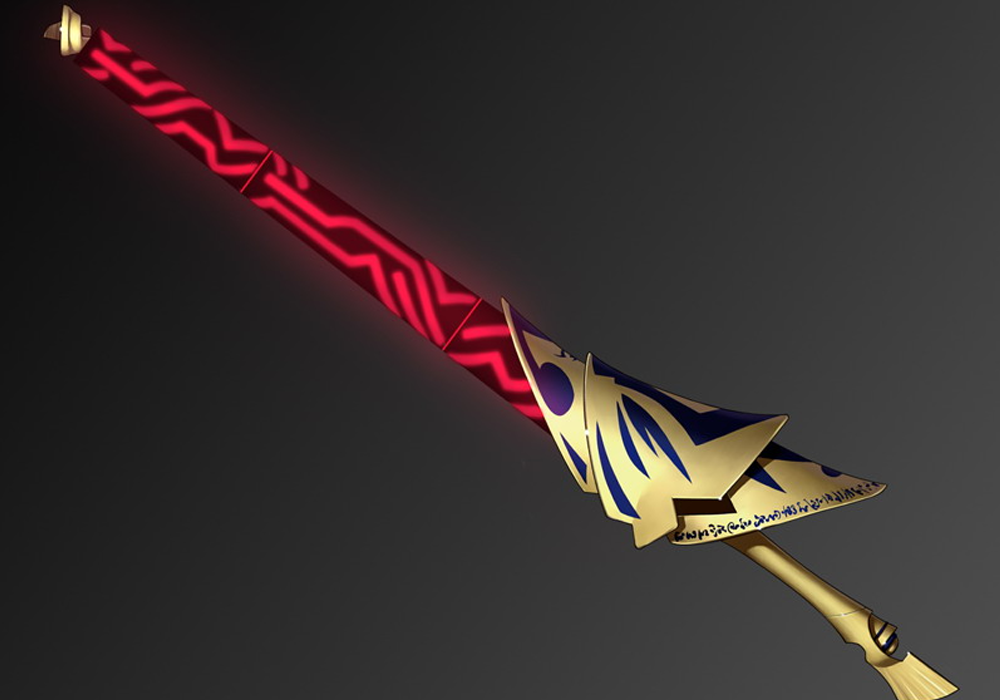 Lay your swords down for the mightiest sword on our list! The title for the best anime sword goes to – Ea from the Fate universe!

This sword goes beyond anything we’ve ever listed in this article. It even goes beyond the concept of swords!

Created before the world, it is the actualization of the works of God before the existence of humanity and contains memories and knowledge of a time when the world wasn’t even molded yet.

It is a divine weapon crafted using materials that cannot be found in our mortal plane!

Instead of sharp metal, it has a dull, pillar-like, or cylindrical blade that is divided into three rotating segments. Engraved cuneiforms that glow red are all over it.

It is said that it cut the formless world and divided it into heaven and earth! It contains knowledge of all things and can pass it on to people.

However, mere mortals can lose their minds by just witnessing the greatness of the sword.

Its sole wielder, Gilgamesh, the King of Heroes, treats it as his most prized possession and won’t use it on anyone who he deems unworthy.

This is one amazing, world-shattering sword, alright!