As one of the most classic games of all time, Snake has a place in everyone’s hearts. Google has made it easier than ever to play the game.

If you type “Snake” into Google, you’ll be greeted by a grinning snake. After clicking on play, you’re off!

The fun doesn’t stop there, though. It’s the twenty-first century.

You don’t install Google Snake exactly; all these mod files work through the bookmark manager or the console, reachable by CTRL+SHIFT+J on windows machines.

To enable the mod, you open the bookmark. (From the base bookmark HTML Menu Stuff.) Since these are all JS-based console mods, they can break quite easily.

Each page linked has a short tutorial, or you can watch this video tutorial. 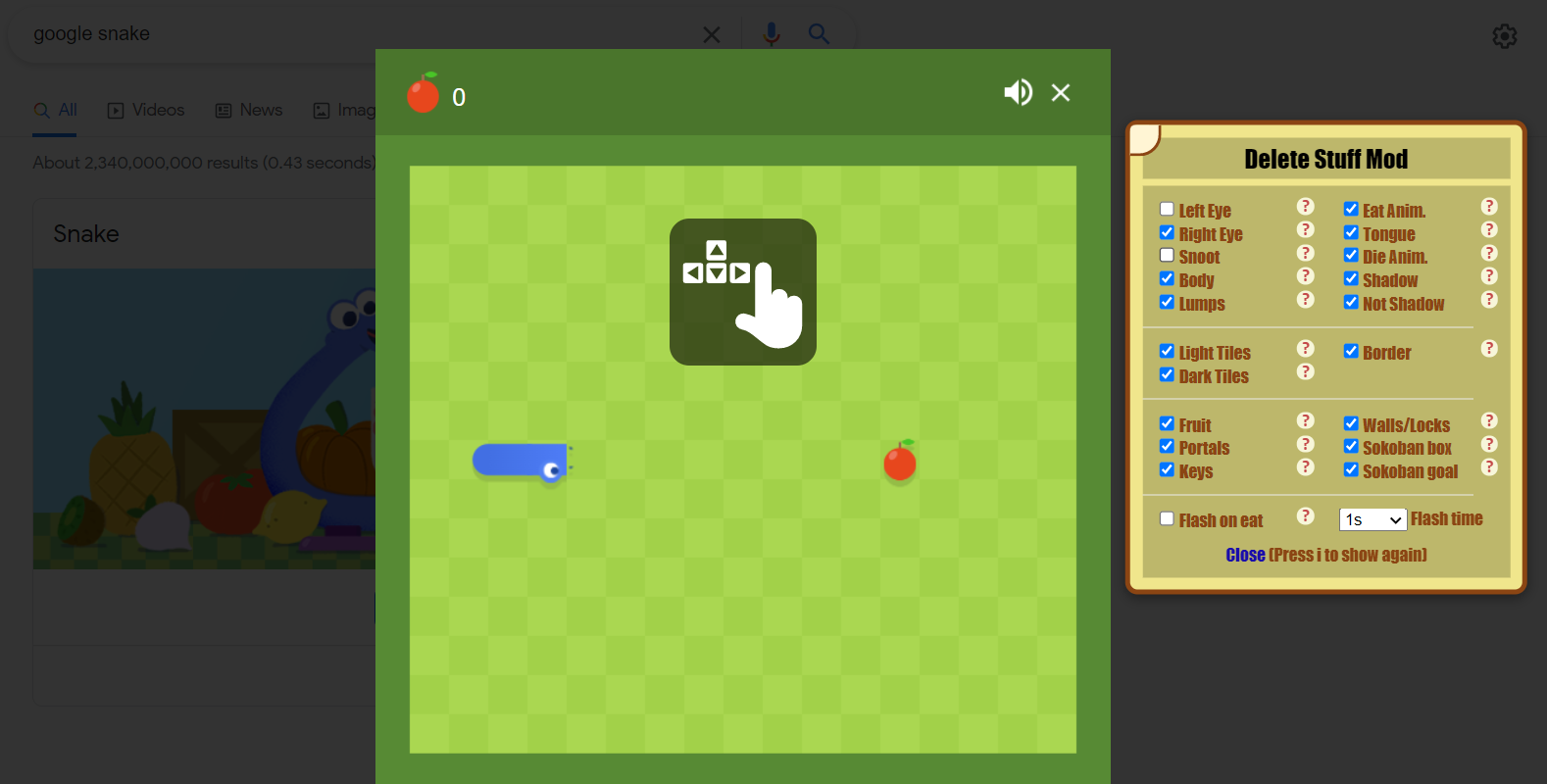 Delete Stuff lets you remove chunks of the stage or the snake.

This mod adds a new Snake game menu that allows you to toggle different visual aspects of the game on and off.

Remove the snake’s eye, animations, body segments, and more. Hate the light tiles on the board? Get rid of them.

If your snake is completely gone, you can toggle the “flash on eat” option to check in each time he eats an apple.

This mod is the more accessible cousin to the utterly invisible snake mode.

Thanks to DarkSnakeGang on GitHub for being at the forefront of Google Snake game modding.

With this mod, you can keep track of your best times for each of the game modes.

Your timer will show up at the top of the window, and you can just times for different setups by clicking the gear. This adds an extra layer of challenge when just surviving is not enough.

Once you get good enough at snake, dying doesn’t happen by accident; it becomes an endurance challenge. Time is more important than the number of apples past a certain point.

This mode is not exactly playable in the regular sense, but it’s fun. Eating one of these spooky skull apples will make your snake go wild.

He will turn grey, too, and wriggle around. It’s very difficult to avoid the walls if the stage is small.

This mod will also turn other fruits grey if you’ve enabled peaches or mushrooms, for example. Eat the colorful fruits while avoiding the grey ones; can you avoid them all? 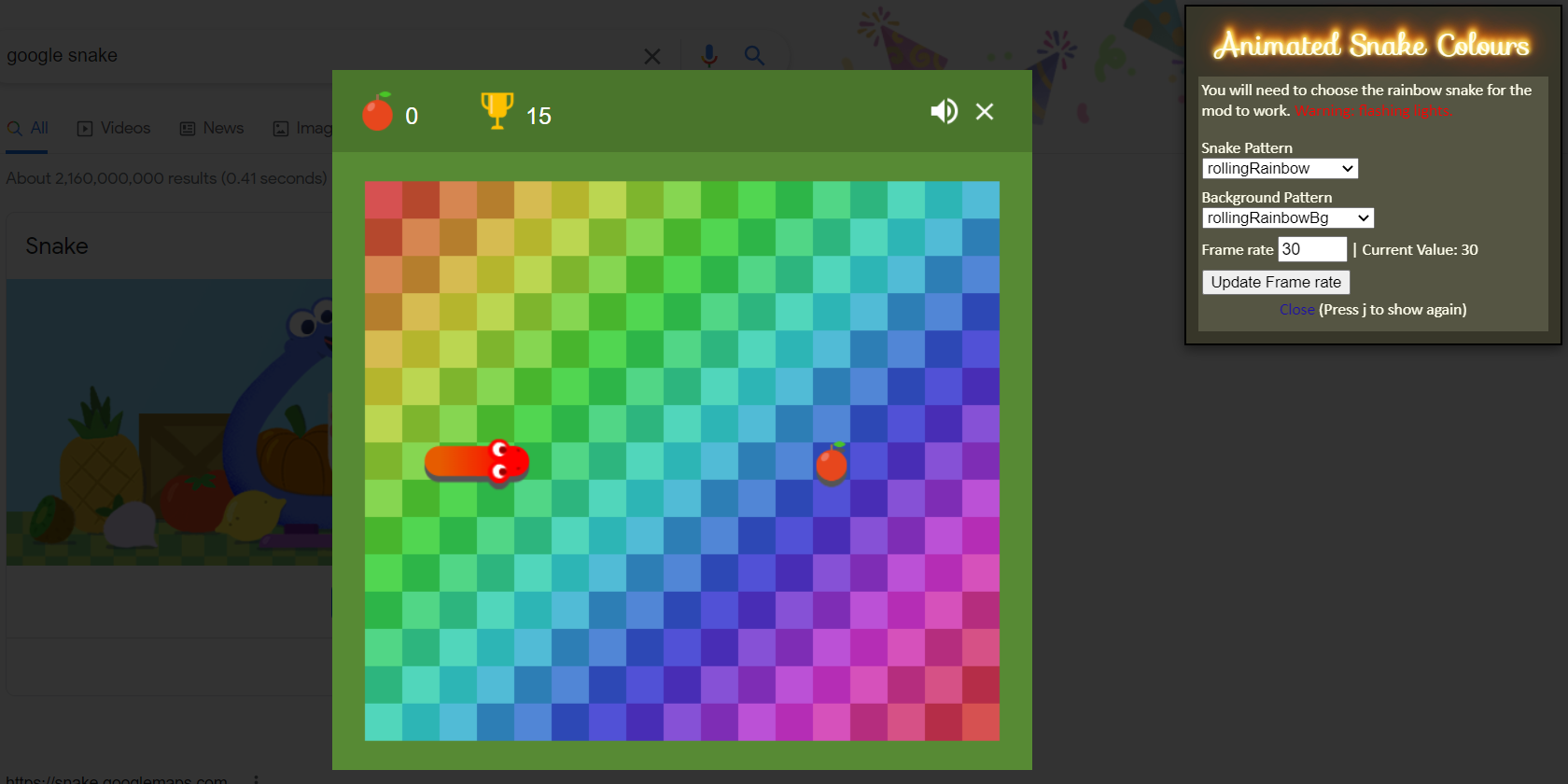 Animated Colors proves that aesthetics in gaming matter, even if the game is Google Snake.

With a suite of options for changing the appearance of your snake and stage, this mod lets you tailor your Snake gameplay to your personal visual tastes.

Some combinations are difficult to look at, but others are pretty cool. This mod is brought to us by DarkSnakeGang yet again.

Our favorite snake is the red and orange ombre color scheme with the classic stage colors.

The DVD Screensaver from old DVD players is a nostalgic memory for anyone born before 2005.

Make your snake like the bouncing DVD logo with this silly mod. There are toggles for the DVD logo, dark mode, and any color you make want to change.

Using this mod requires typing into the Google Chrome console, so tread carefully. Directions can be found on the Git Hub through the link.

This mod is temperamental and requires the use of the Chrome console. If you are less confident with JS or using console commands, consider giving it a pass.

Any Board Size in Google Snake has a self-explanatory name.

This rough mod lets you increase or decrease the size of the platform your snake can traverse.

Some combinations of dimensions render the game unwinnable either by too much distance or too small an area for the snake to maneuver.

Snake tip: Don’t pair this mod with the wall-less mode; it defeats the purpose and feels terrible.

As a fun extra, you can toggle dark mode and change the tiles’ colors. 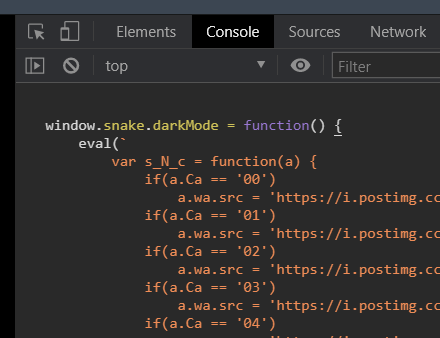 Dark Mode is a must-have feature for any and all programs in the 2020s.

Through a simple mod, you can activate a modified dark mode in Snake. This is easier on the eyes, without all of the searing white that web pages, especially Google, seem to think is good.

Chrome itself has a dark mode setting, too, in case you didn’t know.

As the old adage goes, play in dark mode or not at all. Seeing someone using an app in light mode is like seeing a horse-drawn carriage. (Kidding.)

Toggle Death Screen will enable or disable the screen that shows when your snake bites the dust.

We suspect this mod was a “Let me see if I can” project for the creator. 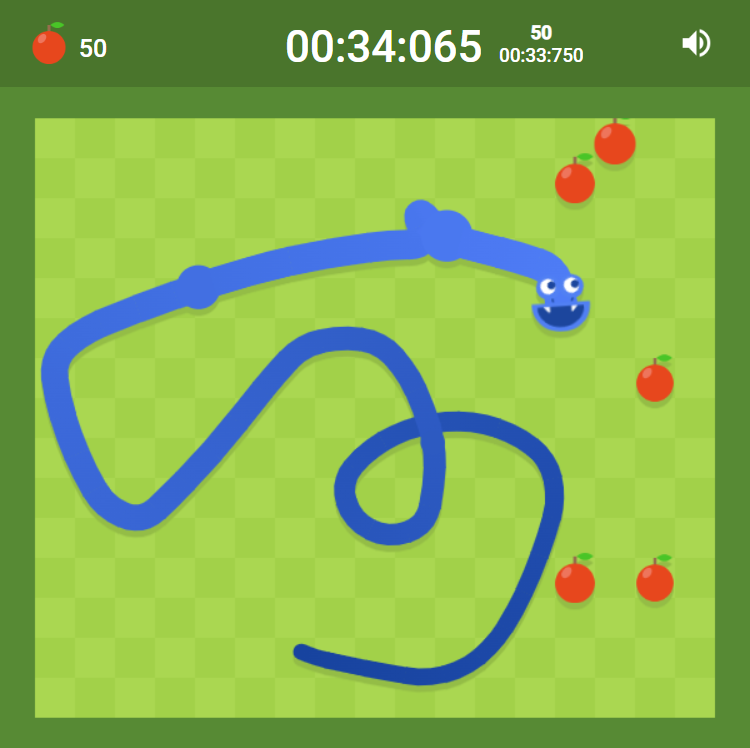 Mouse Mode lets you say goodbye to your keyboard.

For those of us that would rather direct our snake towards his fruit with our mouse rather than the keyboard.

This mod will allow the snake to dart right toward your cursor, disobeying the typical grid that snakes follow in the game. You can get some loopy shapes with this mod.

Mouse-controlled snake is almost a brand new game that deserves its own title.

Combined Modes provides a feature that is now built into the general imported folder bookmark options for all of these mods.

It is best to use the built-in blender mode, not this mod. It is on this list in case you’re interested in how it worked or its legacy.

Click the gear and scroll sideways along the game modes until you reach a tiny picture of a blender. This is the new mode that emulates this mod.

You’ll find playing multiple game modes at once to be a new challenge in your Snake career. It’s a lot to juggle with your mind.

Custom Menu Stuff is the HTML bookmark file you can import to Google Chrome.

This set of javascript commands needs to be executed before using any console commands listed in the mods above.

If you are afraid of the console, this menu mod alone offers full unlocks and custom game modes that should be plenty for any casual Snake gamer.

4. As If Your Internet Went Out (AIYIWOWTGWL)

AIYIWOWTGWL is a bonkers acronym for a simple mod.

If your internet goes out while snake is loading, you may find that your slithery, hungry avatar is nowhere to be seen.

This mod emulates that by making your snake invisible. Good luck playing without being able to see the narrow reptile as you guide him between fruit.

This mod is a little novelty, but definitely a good time to kill a few minutes. Try saying the acronym out loud as one word; that’s another few minutes of fun. Thanks, modders!

FBX is one of the classic file formats for arcade games.

Using Google Snake Centered FBX, you can play the FBX Arcade version through Google Snake. This mod is a part of the more extensive set contained in the bookmark HTML but can be deployed by itself if you want the most simplistic snake game experience.

Pretty Timers gives you control over how your in-game playtime timer is displayed.

After downloading the bookmark pack or copying the JS for this mod, you can choose the display format.

You can mix and match capitalization among the minute, second, and millisecond values to monitor the important number for your particular goals.

The final frontier of Snake prowess, the Input Counter.

The original challenge for people beginning their time playing Snake is staying alive as long as possible. Once they are able to stay alive and eating apples for minutes on end, the next phase of optimization is reducing inputs.

This mod will count how many times you move your snake per round or entire play session.

The idea is to keep your snake alive while making the least moves possible. It takes a ton of practice, strategy, and fine motor skills to accomplish this.