Strive is the newest entry into the Guilty Gear series of anime fighting games by Arc System Works and the only proper fighting game we play a lot of.

With a PC version comes mods. As far as popular fighting games go, GGS is the meme-y-est. 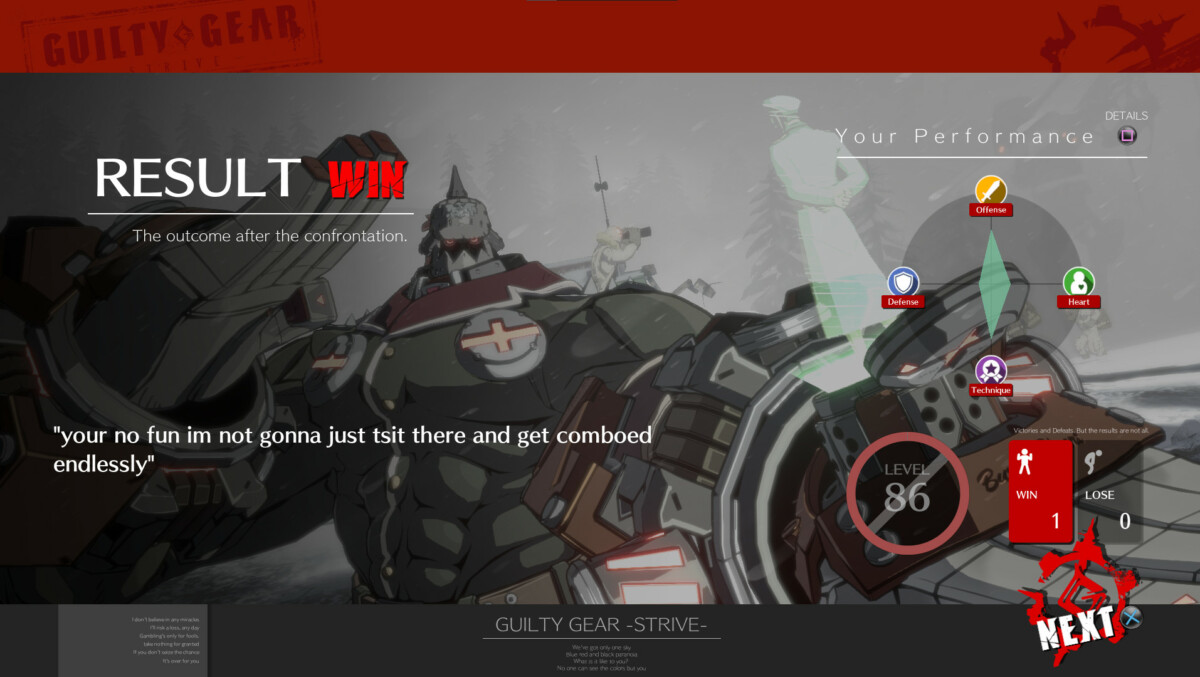 Scrubquotes is the mod for Guilty Gear players who are tired of getting nice titles at the end of a match. Nothing motivates like negativity in competitive gaming.

Instead of getting a heroic, pride-inspiring message or title, players will be greeted with “I’m not playing this game to learn.” or “You’re no fun. I’m not just going to sit here and get combo’d.”

It’s just what you need to hear after stomping someone or getting stomped yourself.

If you don’t know what Scrubquotes are… we have some bad news for you. (Just kidding. <3) 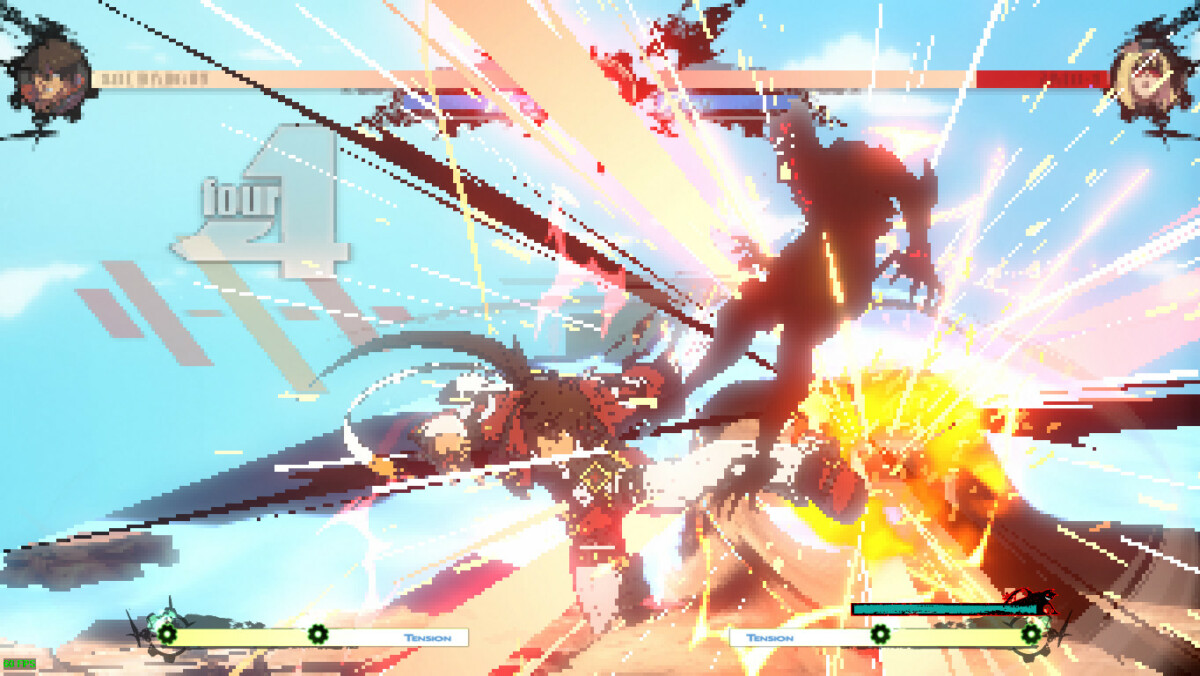 Potato Low Spec is an accessibility godsend for those players out there with wallets smaller than their resolve to fight.

By removing every non-essential asset from the game, this mod allows Guilty Gear Strive to run on ANY computer, even the most potato of all rigs.

All potato players are left with are the stage’s floor and the characters. What else do you need, though?

We think this should be a base feature in more games, not necessarily just fighting games. New games are getting more and more demanding when it comes to the specs of your system, while parts get more expensive and harder to find. How is that fair?

Thanks to Potato Low Spec, everyone can guilty the gears, whether they have a toaster or a spaceship. 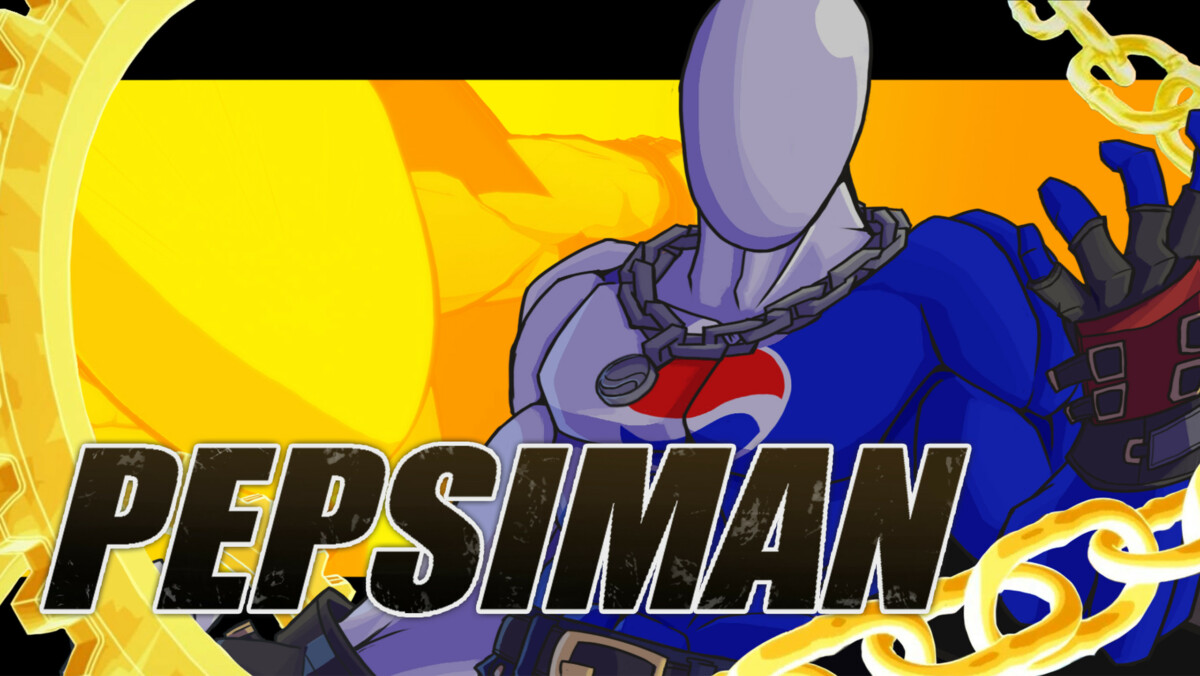 Are you tired of Sol Badguy? Take a sip of PEPSIMAN! He’s the refreshing soft drink creation that has captured our hearts.

This mod lets you play as the beloved Pepsi mascot by sacrificing a different beloved character. PEPSIMAN replaces all of Sol Badguy’s assets and colors to transform the character into the blue, white, and red fighter.

The fighting game community is the most innovative in the world of gaming. Rest in peace, Sol Badguy. 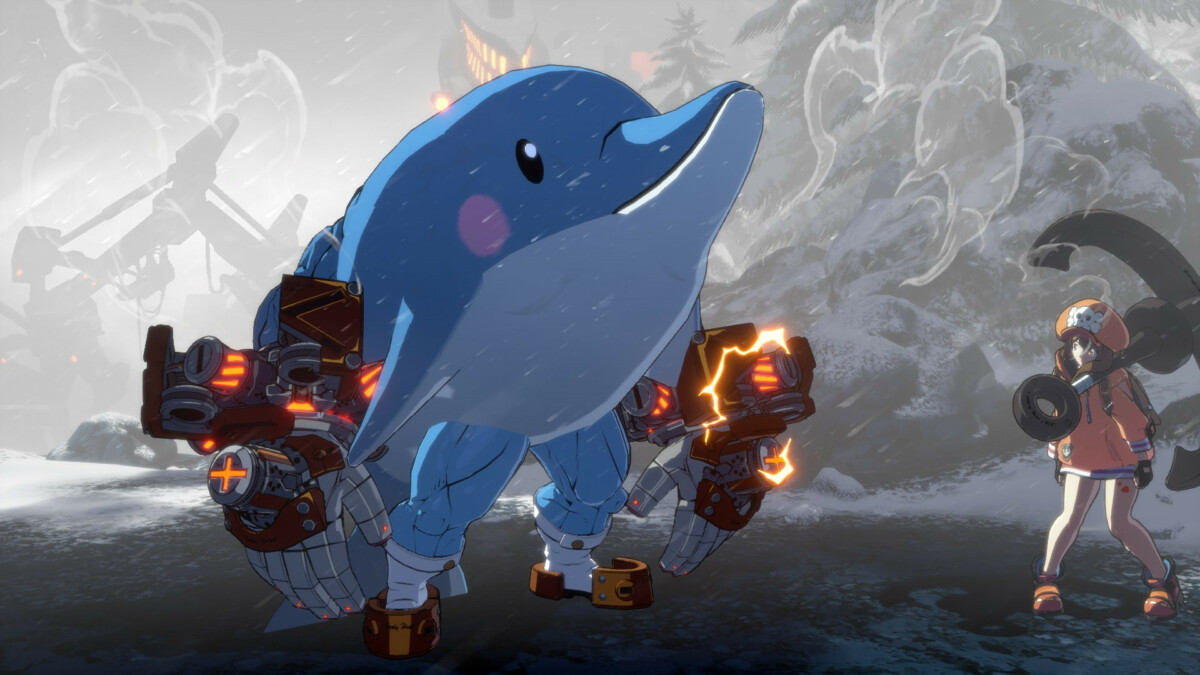 Are you a Potemkin main who pines for May Totsugeki? Now there’s Totsugeki Potemkin.

Downloading this mod will turn your tough fighter Potemkin into an equally brutal but much cuter dolphin.

This dolphin version features huge muscular legs and a kind smile that says, “I’m going to beat the heck out of you now.” The dolphin’s colors change with Potemkin’s scheme changes, too.

The design is based on fan art, but we think it should be made canon. Potemkin mains are getting tired, anyway. 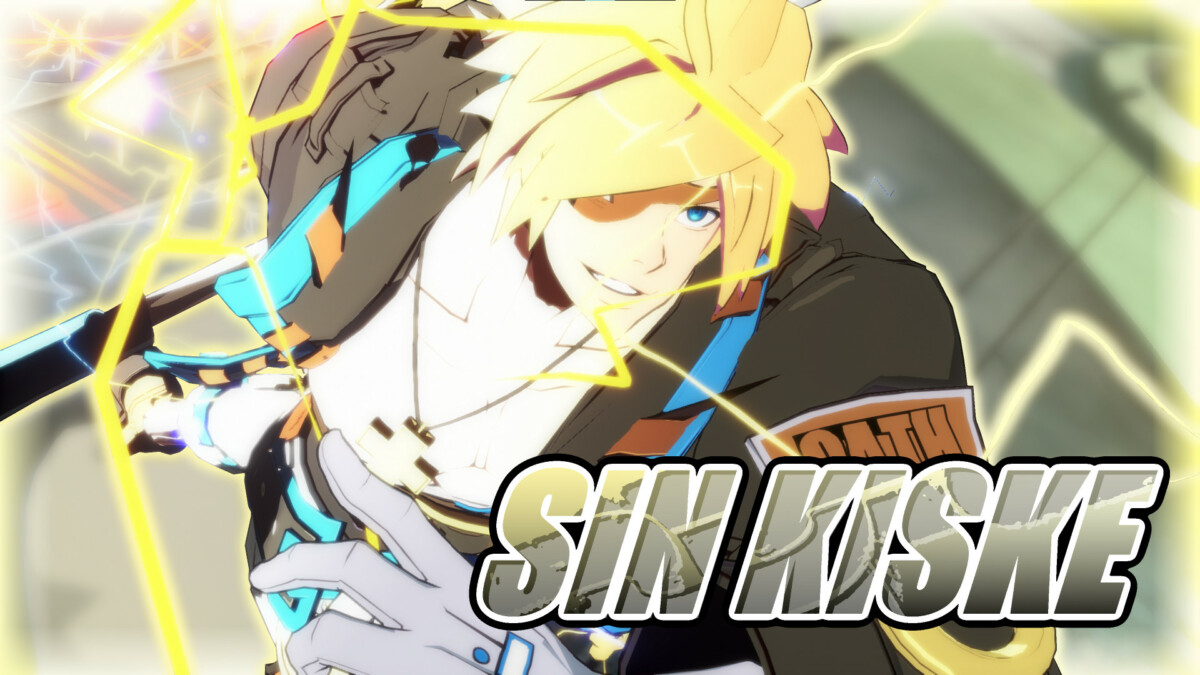 Nestled in his own slot in the character selection window, you can’t tell Sin wasn’t original. Sin Kiske is a brand new, custom character modded into Guilty Gear Strive by Ghost1512201.

This character even works over online play with people who also have the mod; just don’t use him in Tower or Park. Player rooms only.

For a player-made character, Sin Kiske is very well-balanced and fun to play in serious matchups.

This mod replaces the regular counter hit sound effect with a delightful selection of other noises. The selection includes Among Us, Taco Bell, and bababooey.

Players swear this makes them better at the game by encouraging them to counter more accurately. (Not really.) 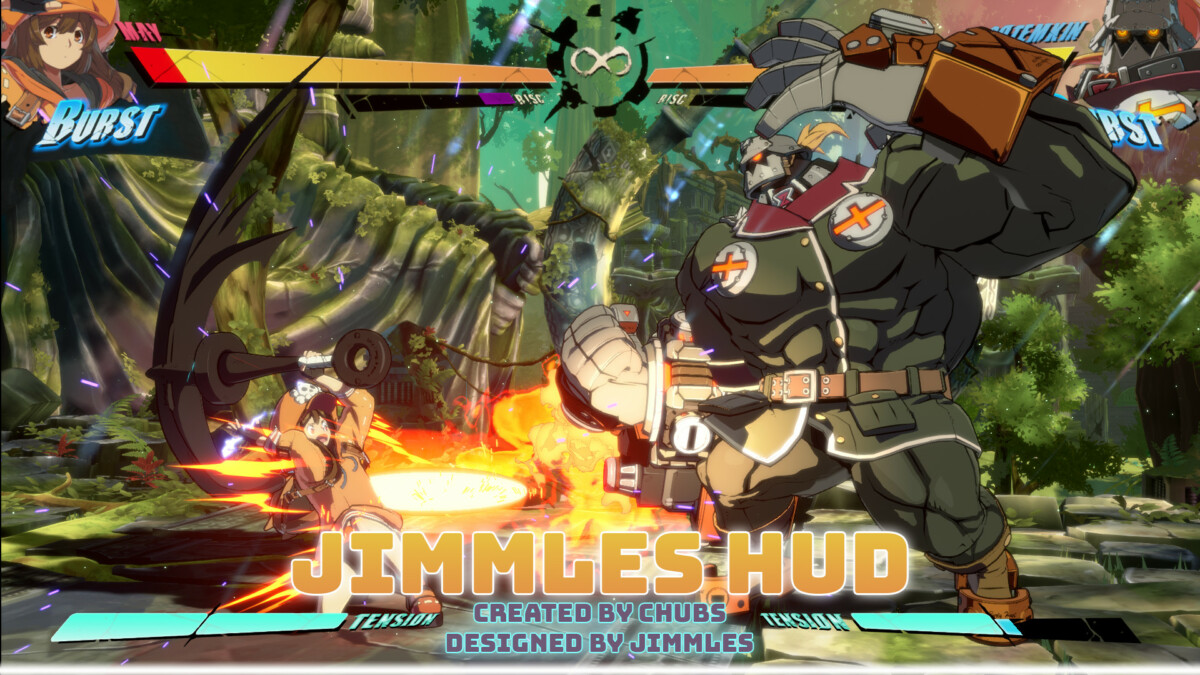 This HUD mod has custom gauges for different characters with more character support in the works, according to the creator. Ranking #1 among custom HUDs for this game, it’s a solid choice if the standard layout is too bland. 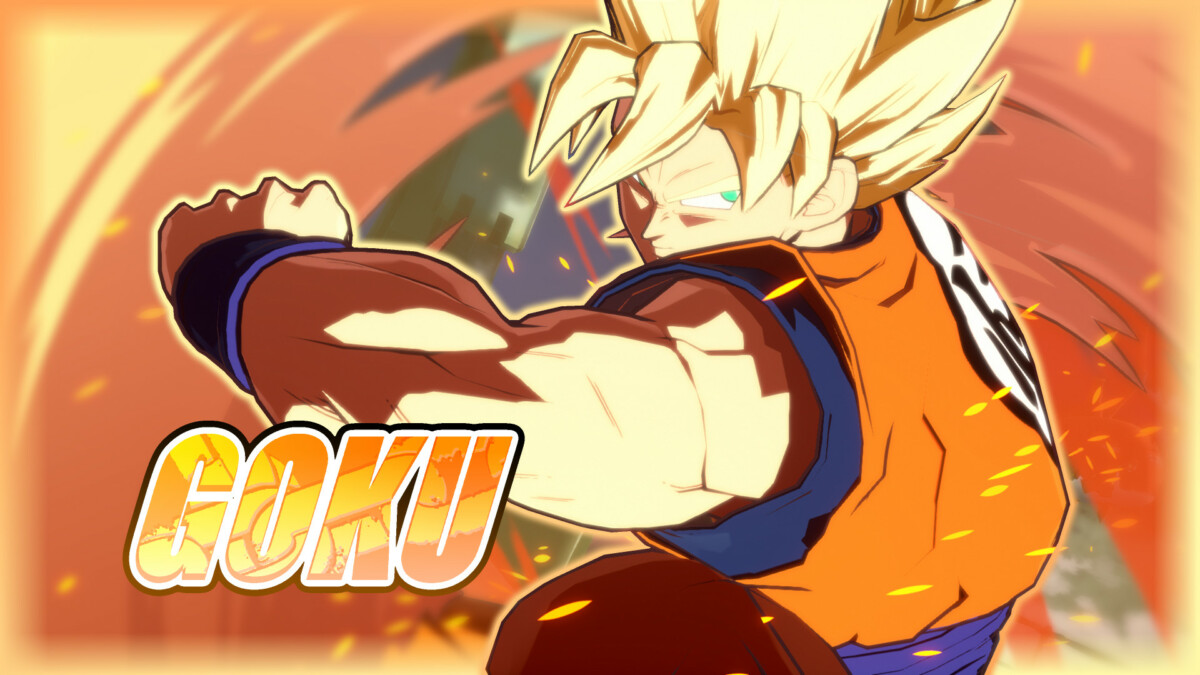 The crossover event of the century, Goku for Guilty Gear Strive!

The super saying joins the Gears and the humans. This mod adds the custom character Goku to Guilty Gear. From the same mod creator that gave us Sin Kiske, playing as Goku is a blast.

Unlike Sin, however, this custom character is not well-balanced and isn’t meant to be. He is not for use in Tower or Park.

Keep the custom Strive characters coming, Ghost. The GGS community appreciates your hard work. (Same goes for all mod creators out there. Bless.) 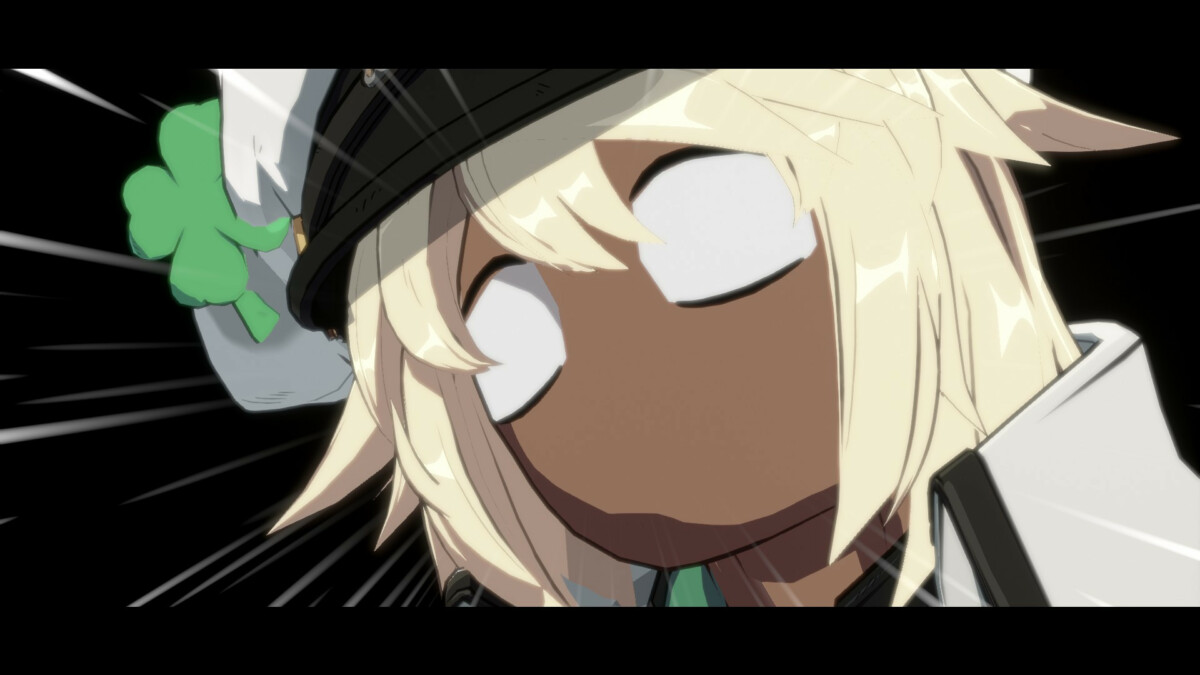 If you’re a fan of the anime that features Komi, you’ll love Ramlethal Can’t Communicate, a cosmetic mod inspired by fan art of the show.

Finally, a mod that replaces Ramlethal’s face with that of Komi Shouko from Komi Can’t Communicate.

Modding Guilty Gear Strive is done almost entirely for fun and jokes. Seeing Komi’s stunned facial expression while you clobber your opponents with Ramlethal is a treat. 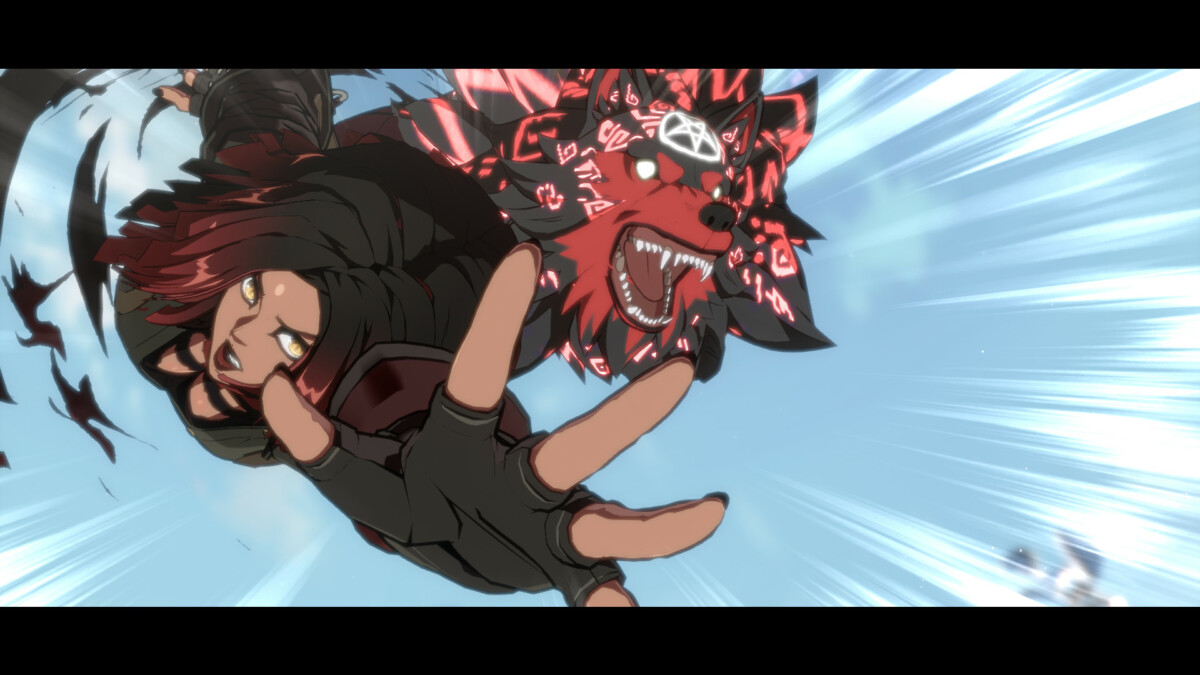 Turn your favorite fighter goth with the Goth Gio mod.

Mod creator Surewin made this mod that turns Gio into a fab goth girl. With darker clothes, a red ombre effect in her hair, evil runic markings, and a devilish transformation at 100% gauge, Gio becomes a force of darkness.

The best mods come from dedicated players who are simply crafting something they want to play with themselves; this is an excellent example of that.