The Power of Friendship in anime usually comes in threes!

We decided to put the spotlight on numerous trios in anime. These kinds of friendships often show very varied characters, but they are always connected by their friendship, trust, and loyalty to each other.

From shonen comrades to comedy triads, we’ve gathered 20 of the best anime trios in all of anime land.

Gather your own besties for this fun read. Let’s start! 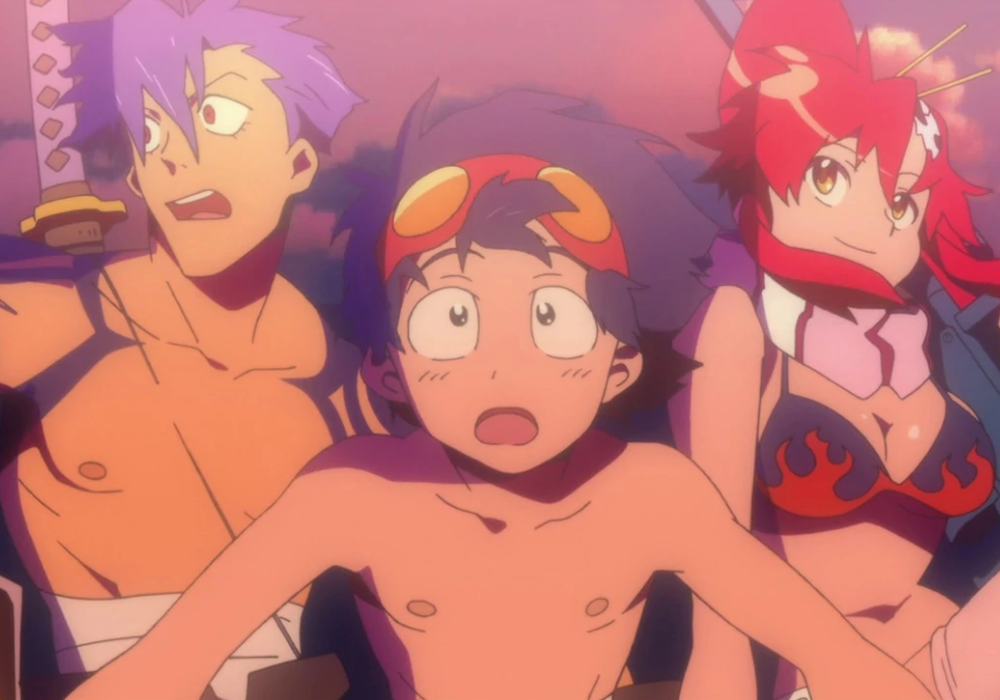 This iconic trio consists of the charming Kamina, cool and cute Yoko, and the hardworking Simon.

Although this trio didn’t last that long, they have provided fans with a well of inspiration for years to come. Row row, fight the power! 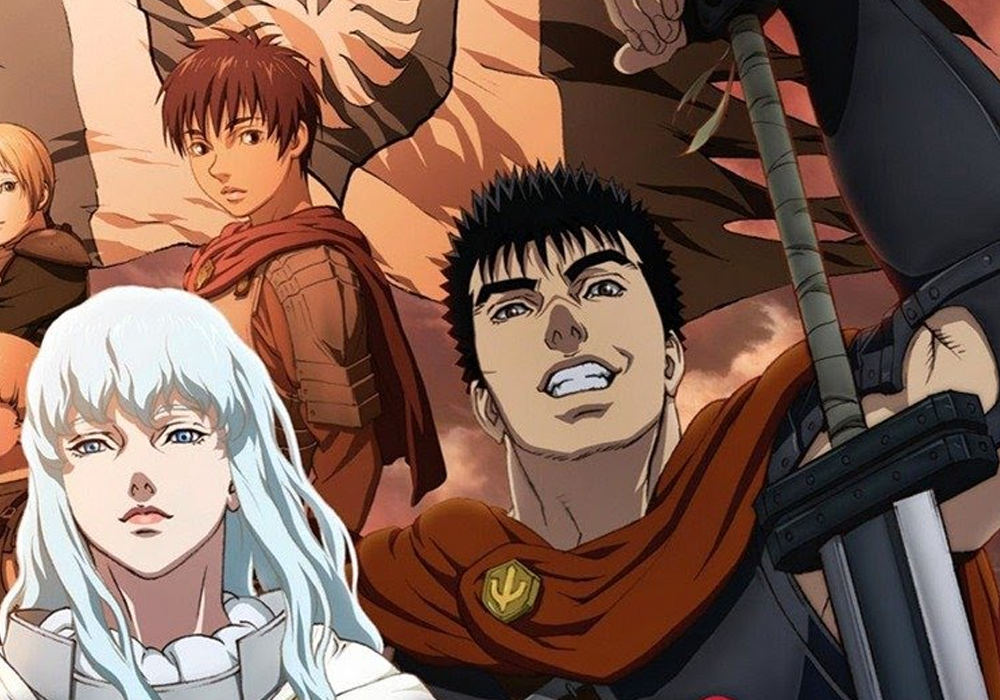 Berserk’s story is interwoven among these three. Knowing what happens to them is heartbreaking and gut-wrenching to think about.

Whatever friendship they all had is now tainted with betrayal and guilt. 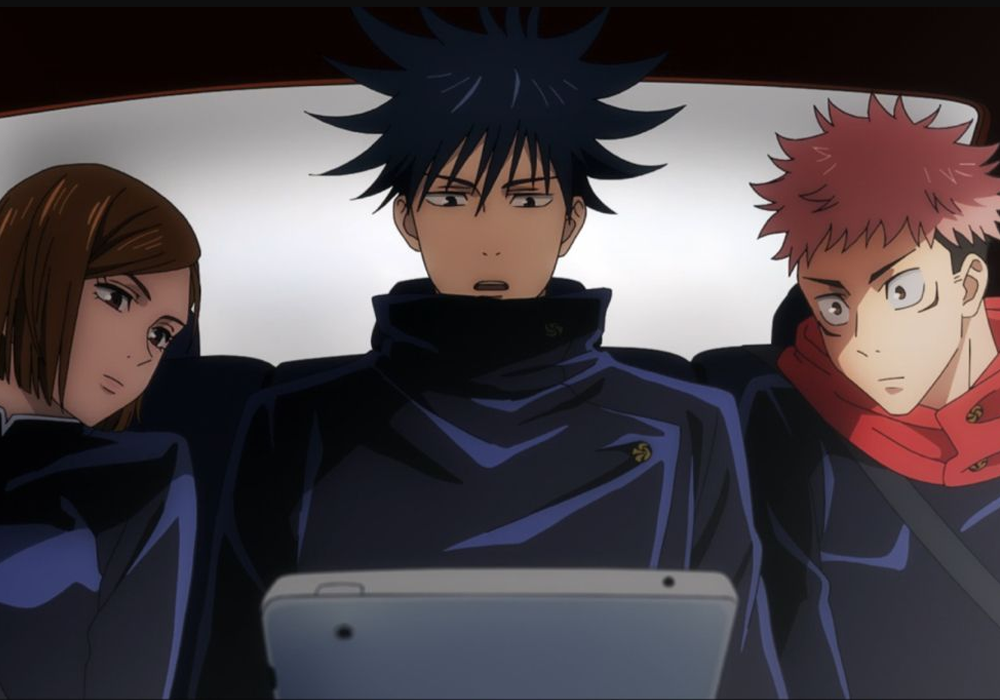 Shonen anime and trios are a classic combination, and Jujutsu Kaisen did not deviate from that.

This trio of first-year students from Tokyo Jujutsu High was grouped together to learn about sorcery, combat, and teamwork.

They may be different, with Yuji being too empathetic to the detriment of himself, Megumi acting stoic and calculating, and Nobara with her headstrong and brash personality.

But an unlikely friendship blossomed between these three sorcerers! 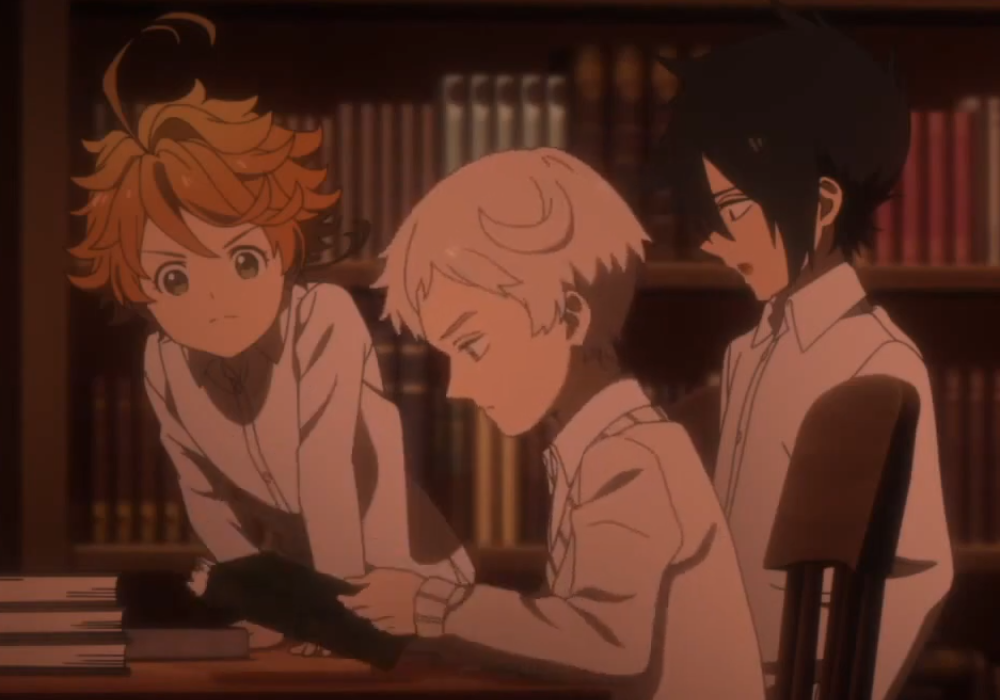 It’s not easy to survive an orphanage that’s just raising you to be demon fodder. But Emma, Norman, and Rey make it work with their care and trust for each other.

Protective and reliable, Emma leads the kids. The intelligent but sickly Norman helps with plans and ideas. Meanwhile, cunning Ray outsmarts their foes left and right.

They may be kids, but the demons better watch out! 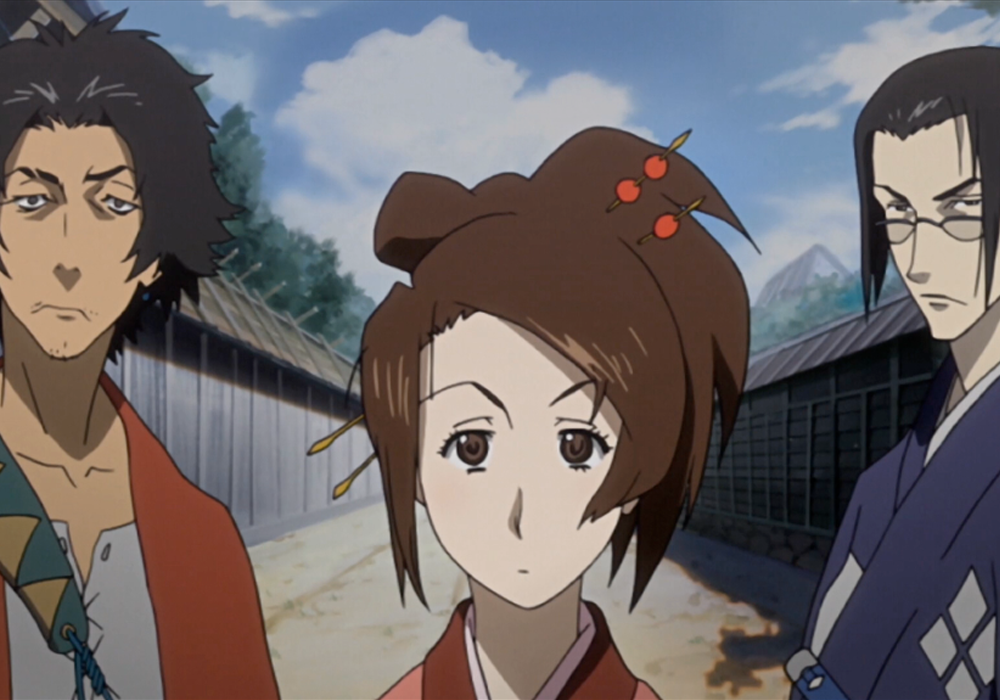 Their quest to find the Sunflower Samurai sent this trio on a whirlwind of an adventure.

From playing baseball and gorging on wild mushrooms to battling assassins in a church – Fuu, Mugen, and Jin became good friends throughout their journey.

After reaching their goal, they parted ways, but not before Fuu revealed that she lied about the coin toss they had at the beginning!

The two guys expressed annoyance but were amused at the thought. They’re all best buds now, anyway. 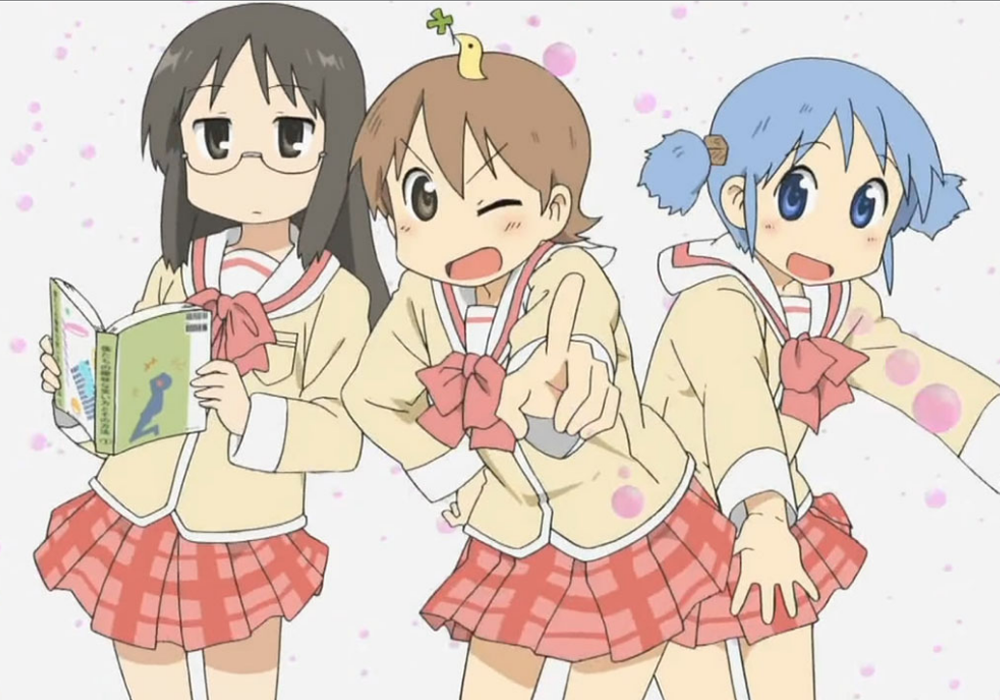 Full of ridiculous situations with amazing animation, the main trio of Nichijou can serve up funny expressions and hilarious gags.

The cheery Mio hides numerous secrets that end up in ridiculous hijinks. Mai is quiet but an oddball.

And Yuuko, both the tsukkomi and boke at times, never fails to get into funny situations.

Together, they make Nichijou Kyoto Animation’s trump card when it comes to comedy. 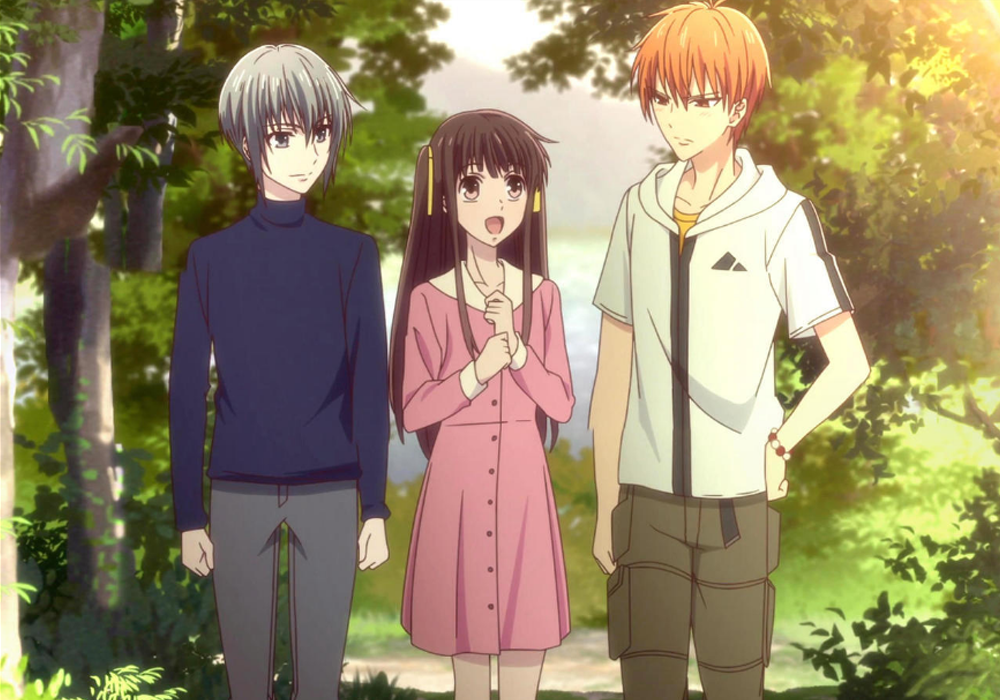 Tohru is kind, caring, and optimistic. Yuki looks calm and collected most of the time but hides his true emotions. And Kyo, who wears his emotions on his sleeves, is brash and aloof.

There might be some kind of love triangle happening at first, but the story focuses more on their friendship and how Tohru helps them navigate through their trauma and family problems.

In the end, you just want all of them to be okay and to stay together as a family! 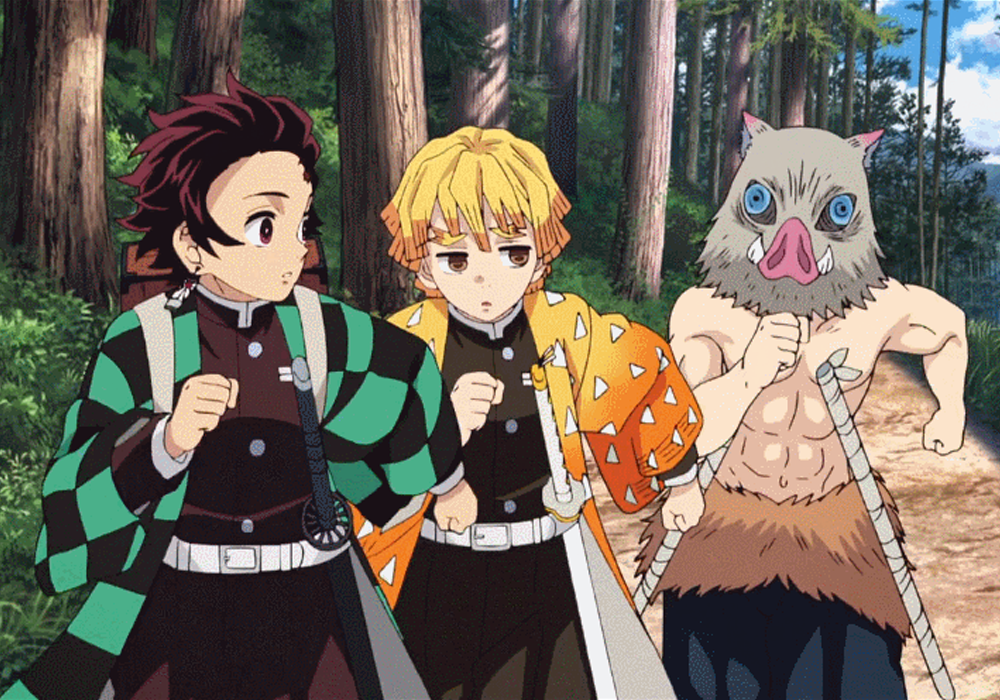 Fighting demons might be the only thing in common among them.

The levelheaded Tanjirou is selfless to a fault. Inosuke is hot-blooded and goofy. Zenitsu is loud, wacky, and a crybaby.

But these three know they definitely have each other’s backs.

As seen when they fought, Daki, Tanjiro and Zenitsu adeptly covered for Inosuke while he was advancing with his special attack. 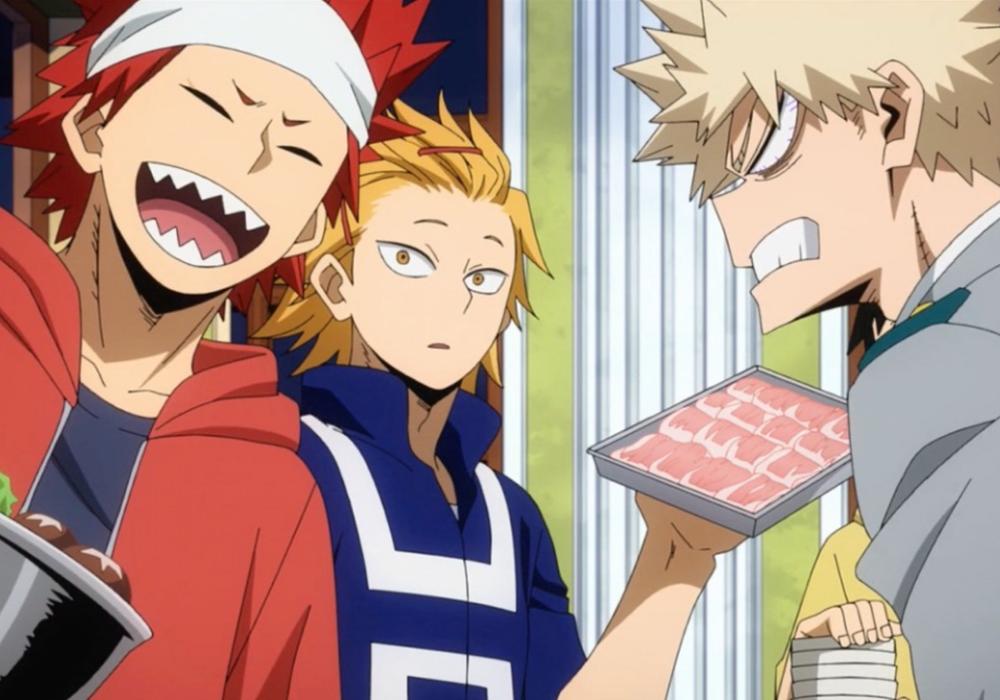 There are a lot of trios in My Hero Academia.

We have the protagonist Midoriya and his friendship with Uraraka and Ida. The school has The Big Three students. And Todoroki sometimes joins Midoriya and Bakugou as well.

But the trio we decided to feature from MHA are Bakugou, Kirishima, and Kaminari.

Bakugou can be quite brazen, but Kirishima sees the good in him and supports him.

In turn, he accepts Kirishima as a comrade. Meanwhile, Kaminari tags along them and provides comic relief.

A very oddball trio, but it works! 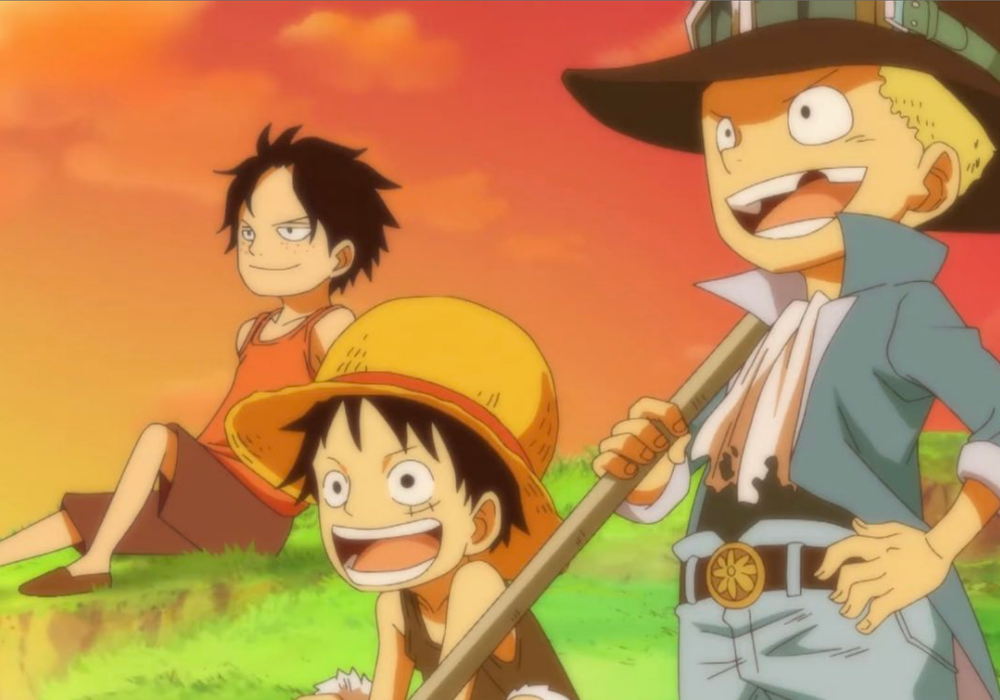 While the Power of Friendship is a common theme in a lot of shonen shows, One Piece does it very well.

It’s difficult to pick a trio from the show, especially since the urge to include all ten of Luffy’s crew is strong.

So for this entry, here’s Luffy, Ace, and Sabo instead. They might not be the Straw Hat Pirates, but their friendship is memorable in the show.

As a troublesome kid, Luffy was sent to live with mountain bandits by his grandfather.

There, he meets Ace, who was also sent there by his grandpa. A runaway boy, Sabo, befriends Ace, who completes their trio.

The three trained together and got into hijinks and minor troubles. Although they come from different families, they declare themselves as brothers.

As a flashback, this is heartbreaking to watch since Ace died in the previous arc, and Sabo’s current whereabouts at that time were unknown. 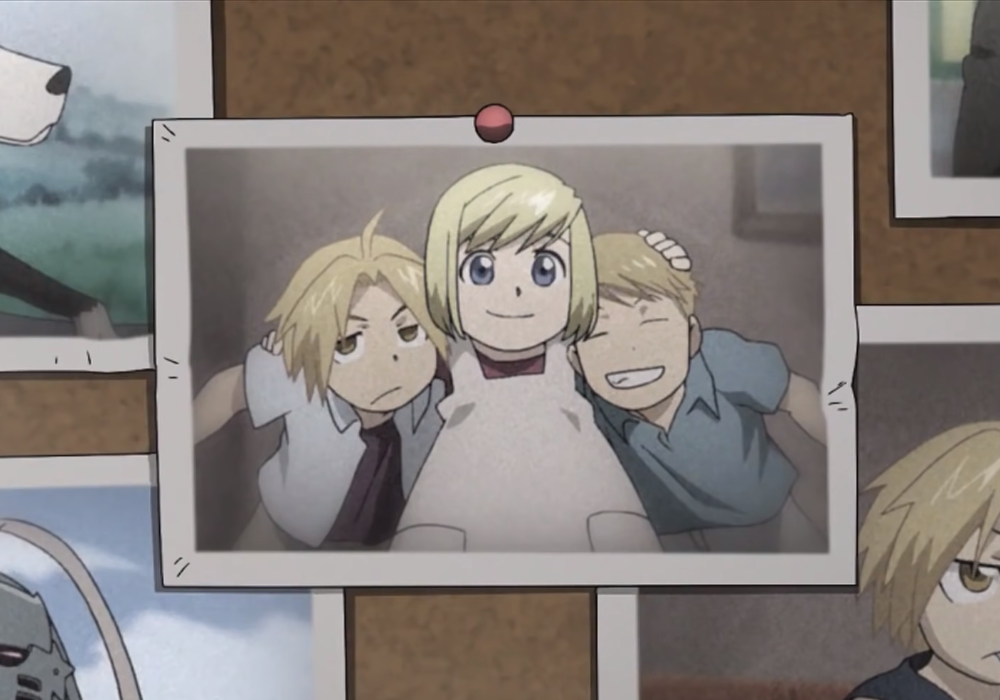 The brothers Ed and Al went through a lot as a kid. Thankfully, Winry is always there to offer a helping hand and to cheer them up.

Ever since they used automail to make up for the body and body parts they lost, the brothers have always been very thankful for Winry’s mechanic and automail expertise. 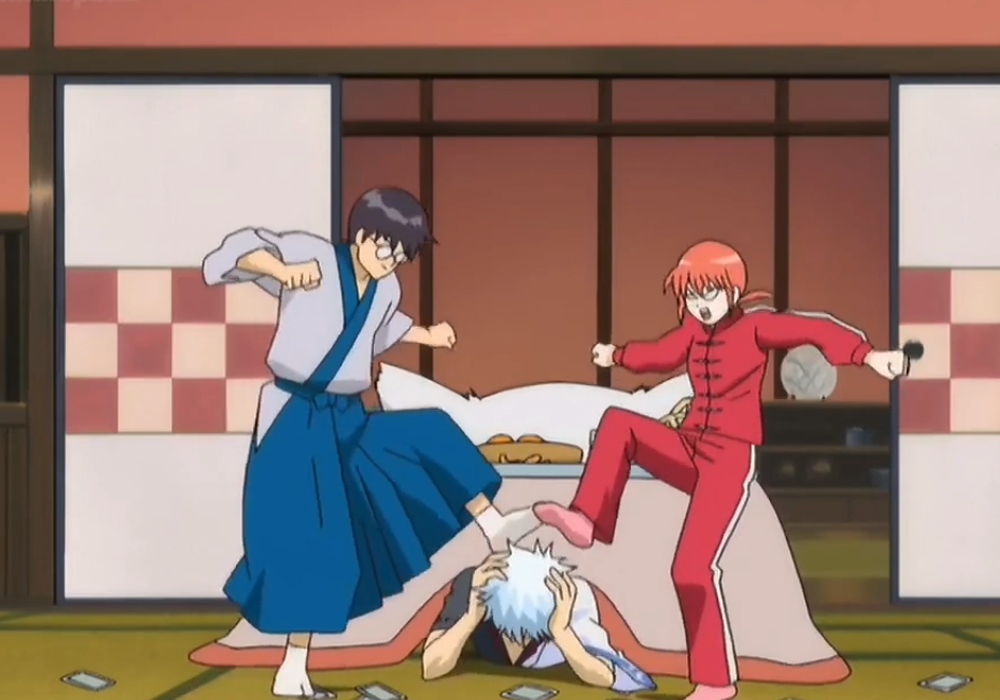 Gintama knows how to bring in the jokes and the trios. Out of all the groups and friendships in the show, we picked the Odd Jobs gang for the humor and classic Gintama feel.

The trio has Gin himself, who started this freelancer business to basically accept any job that pays. The tasks are often refused or dropped, however.

Along the way, he is joined by Shinpachi, who usually fills the straight man role of the group, and Kagura, whose other-worldly behavior goes well with Gin’s laidback weirdness. 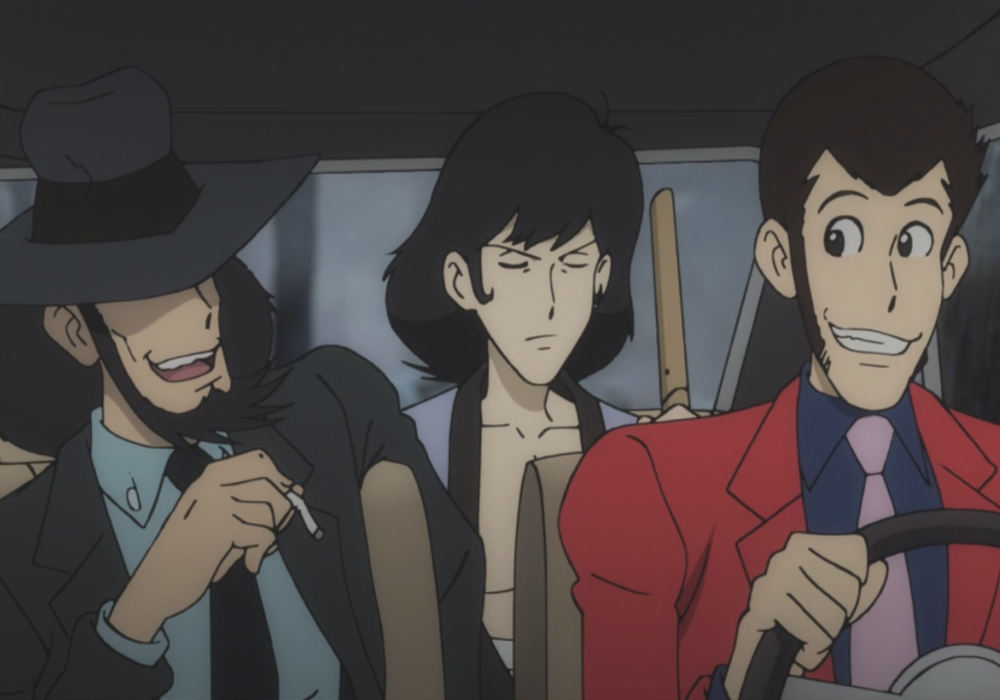 If we’re talking about anime thieves, we simply can’t skip this trio.

Lupin brings wit, charm, and humor to the group. Jigen‘s the marksman who can do miraculous shots no matter the circumstance – so long as he has his hat!

Then there’s Goemon, the renegade samurai who’s often quiet but lets his sword do the talking.

Fujiko joins them here and there, but she often betrays the group. Detective Zenigata shows up to try and catch them. Ultimately, it’s this trio that has become this show’s iconic group. 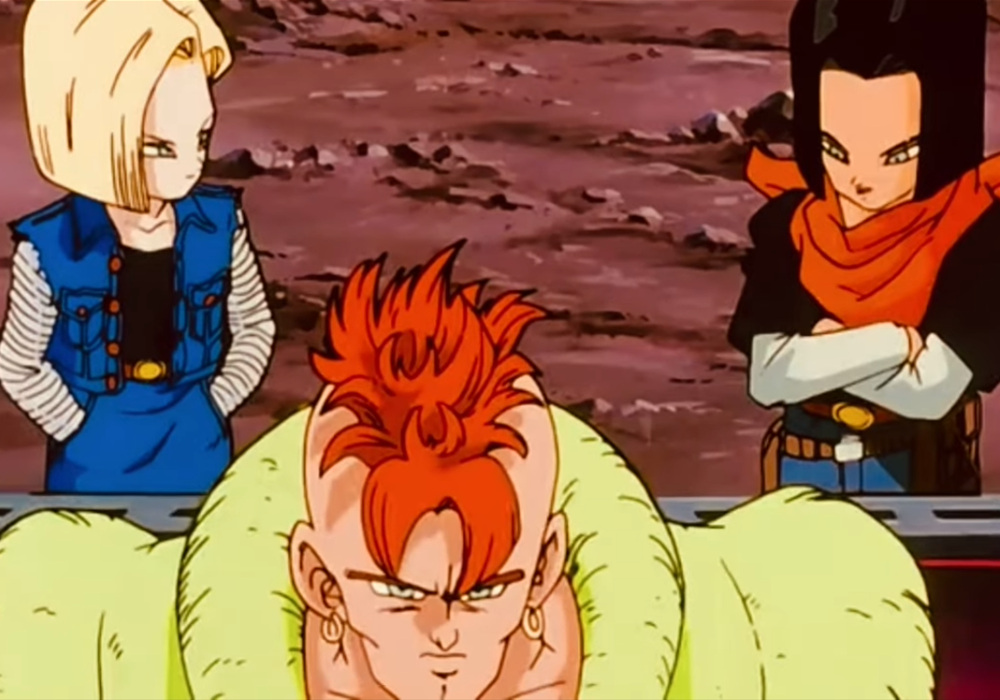 This long-running, action-packed shonen has a lot of notable trios. Goku, Vegeta, and Piccolo are usually at the forefront when it comes to fighting. In GT, we see kid Goku, Pan, and Trunks on a space adventure.

But the trio we ultimately picked for this list are the Androids 16, 17, and 18.

They were introduced as these powerful threats that destroyed Future Trunks’ timeline.

Their cool disposition, devil-may-care attitude, and unique looks made them one of the most memorable foes in the series. 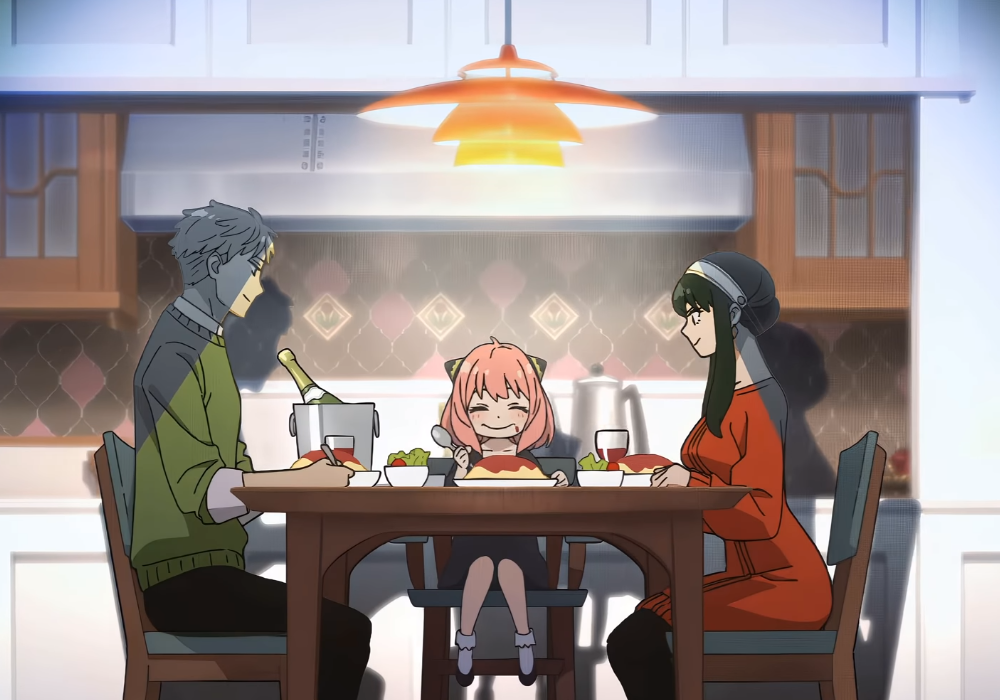 Spy x Family has been taking over the anime sphere by storm – and for a good reason!

Aside from its interesting premise, the main trio are compelling characters who have to pretend to be a family together.

You have the spy dad, assassin mom, and their telepath child. They all have to keep their identities hush-hush, but their efforts make for an entertaining watch due to the hijinks!

Plus, they’re really a cute family. 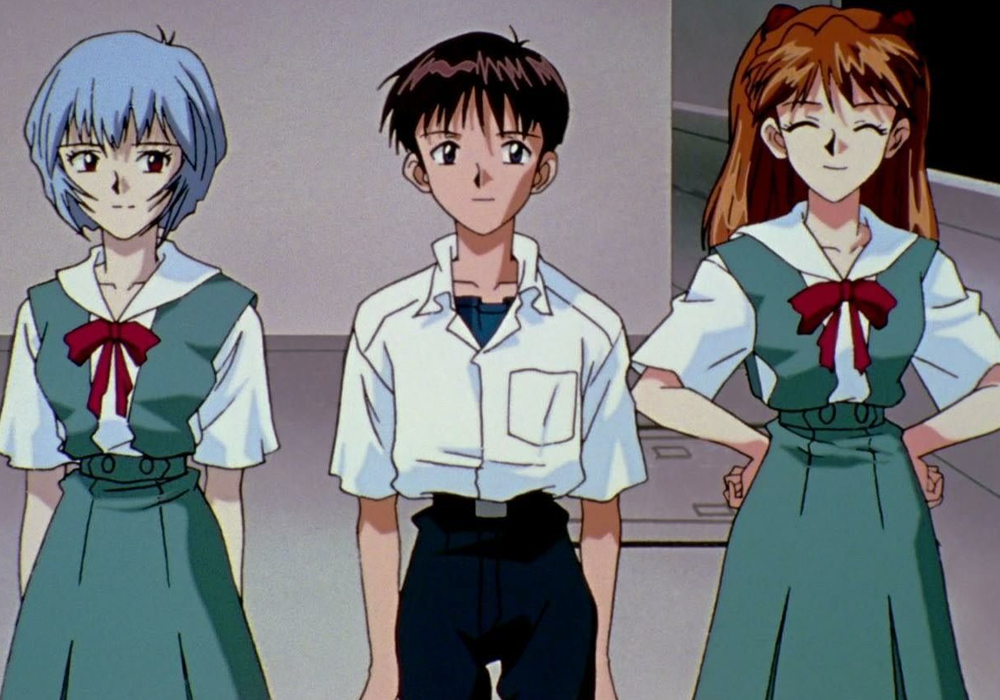 In the midst of alien attacks, science experiments, the world ending, and robot battles, these three young teenagers are caught up in the center of it all.

Aside from Gendo Ikari’s memorable pose and glasses, their Evas and plugsuits are iconic to the show too. 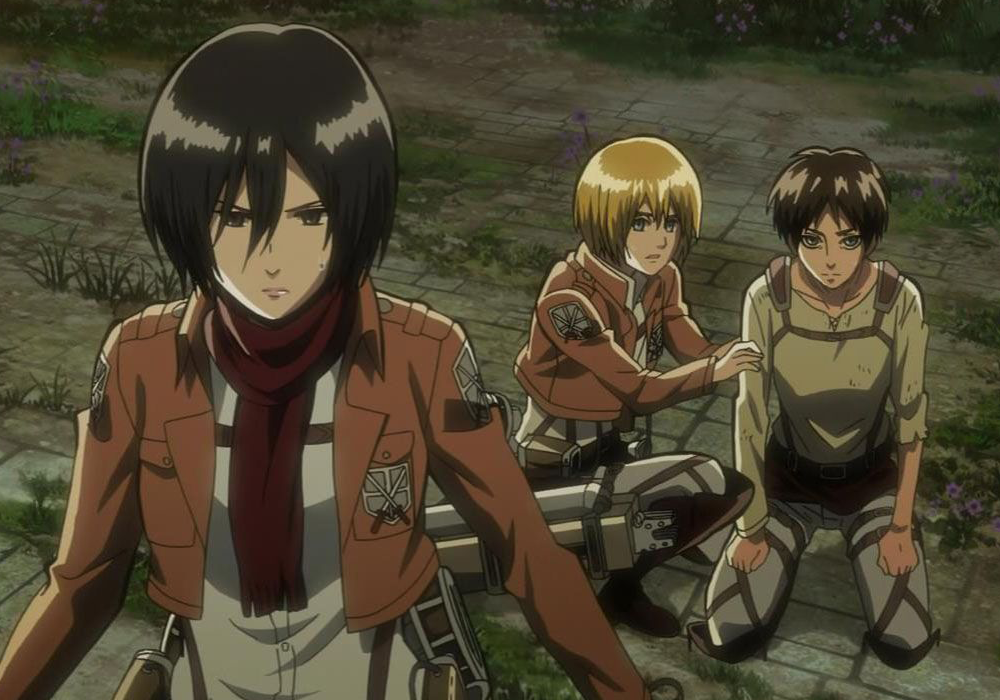 Due to mysterious gigantic beings that attacked their town, Eren, Mikasa, and Armin lost the life they had.

However, they still have each other, and the foundation of their friendship is strong enough to withstand the Titans that threaten their existence.

Curiously, in the latest season of the show, Eren seems to have changed. Here’s hoping their friendship can quickly recover after this little hiccup. 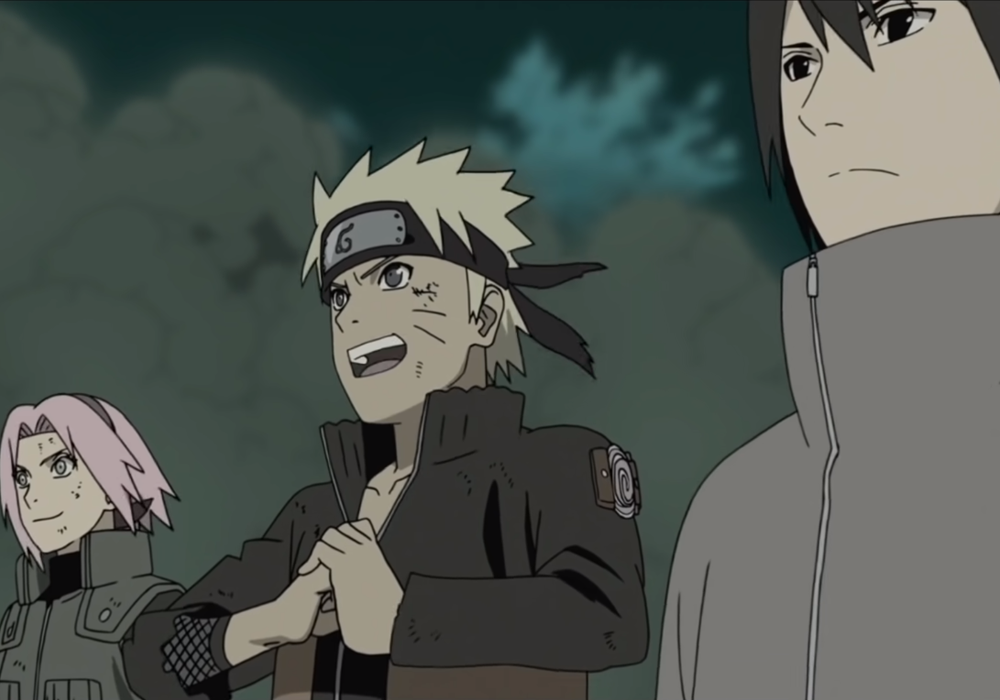 We simply cannot have a best anime trio list without mentioning Team 7!

Arguably one of the biggest shonen shows ever, you would be hard-pressed to find an anime fan who has not heard of this show or the characters.

These three have left quite an impression on a lot of anime fans. We’ve seen them struggle as kids, learning how to be a better ninja and working through their trauma.

And after all these years, we finally see them achieve their goals, grow into upstanding ninjas in their village, and even start a family.

And all throughout, they showed their loyalty to each other, even proving their friendship until the end. 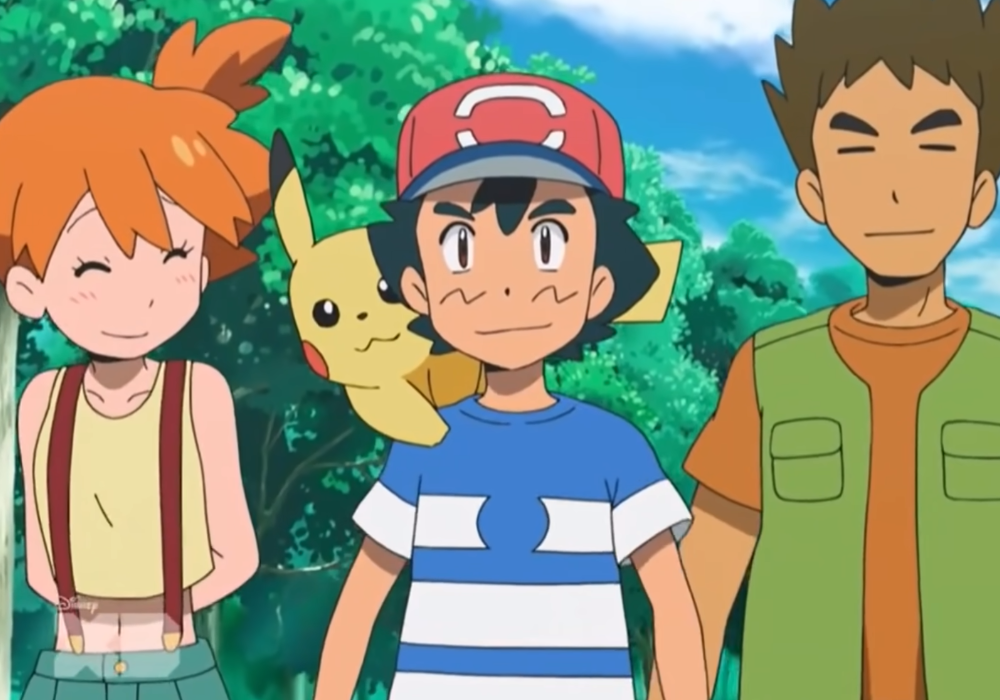 Going on adventures with Pokemon while backed up and supported by wonderful friends? Ash was living the dream, and a lot of us wanted that life as a kid.

Although Ash has now gone through a lot of adventures with many other trios, his original one has stuck with us even after all these years.

Brock was there to give him advice, and Misty cheered for him when times were tough. They even came back for a reunion.

I hope Misty finally got her bike back, though! 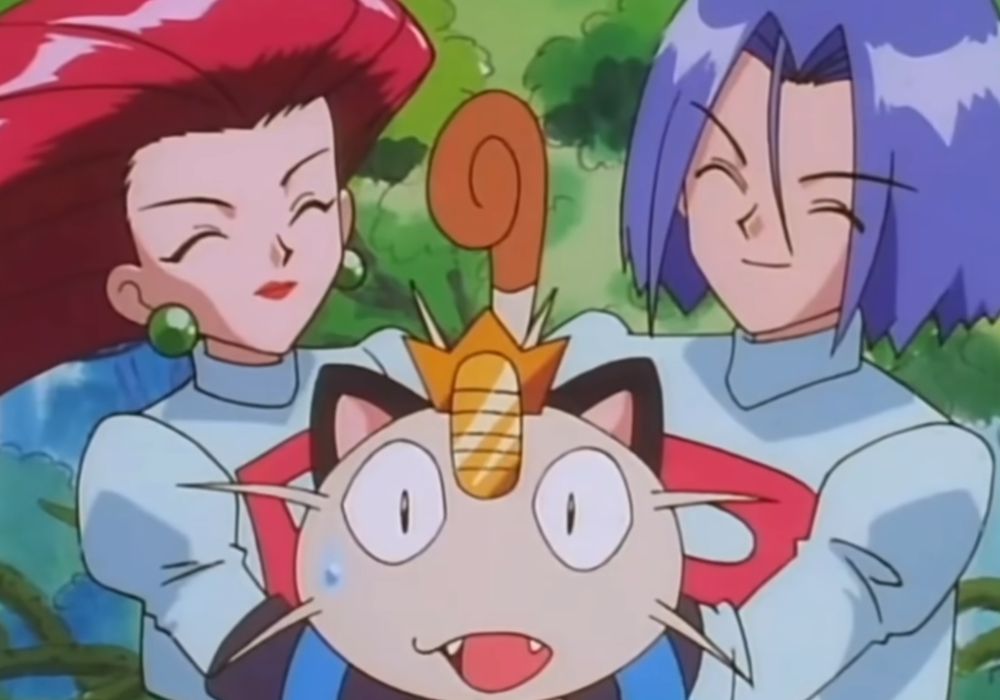 Prepare for trouble, and make it double! The trio we dub to be the very best is Team Rocket!

While these three are antagonists in the show, they have shown us that their friendship is strong. No matter how many times they fail, they rise again together.

Most importantly, can you think of another trio with an intro speech like theirs? You deserve the crown, Team Rocket.