A good show doesn’t just rely on its protagonists. Like night and day, light and darkness, and sweet and bitterness, you gotta balance two opposing forces to make things perfect.

Here are some of the best villains in anime. They’ve made their mark in their respective shows and in the anime fandom in general.

Some of them are pretty iconic and renowned – even though you haven’t seen the anime, you’ve probably heard of them already.

IMPORTANT NOTE: Spoilers ahead! If you don’t want to get spoiled, leave while it’s still safe. 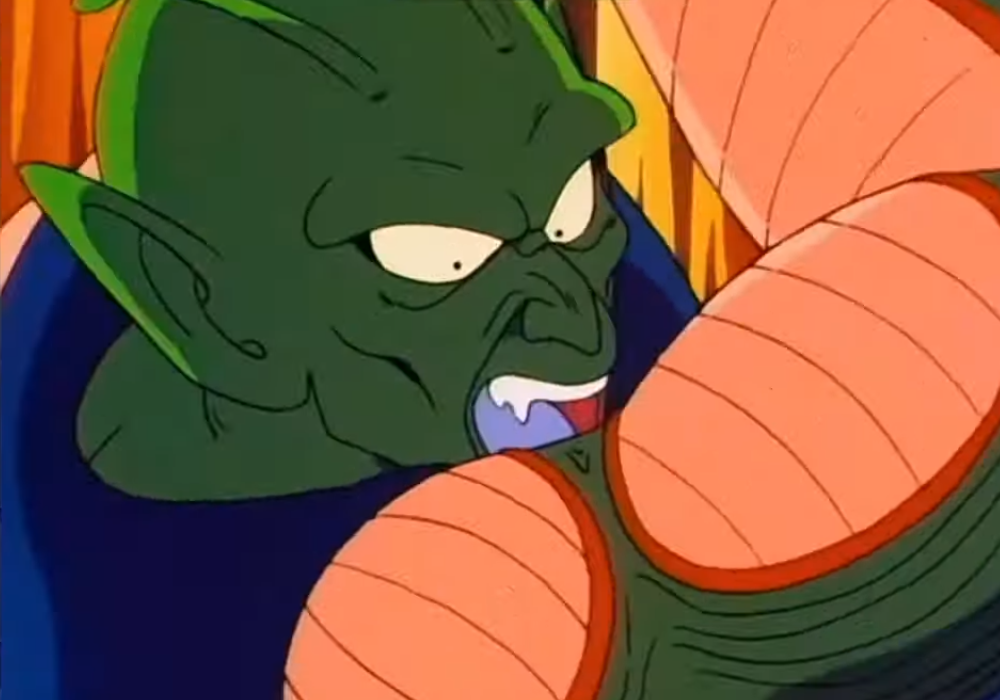 After knowing about the Guardian of the Earth role, an unnamed Namekian yearned for the position.

However, to be a guardian, you have to be void of any evil in your heart.

Unfortunately for this Namekian, he has witnessed the evil deeds of the people from Earth and has allowed jealousy, malice, vanity, and all kinds of impurity into his heart.

He was still eager to get the guardian role. Thus, he decided to get rid of any evil within him.

The evil that separated from him became King Piccolo, who spread chaos on Earth by spawning an army of evil Namekians.

King Piccolo became one of the most memorable villains in the entire series, and from him sprung forth one of the best characters in the whole show: Piccolo Jr. 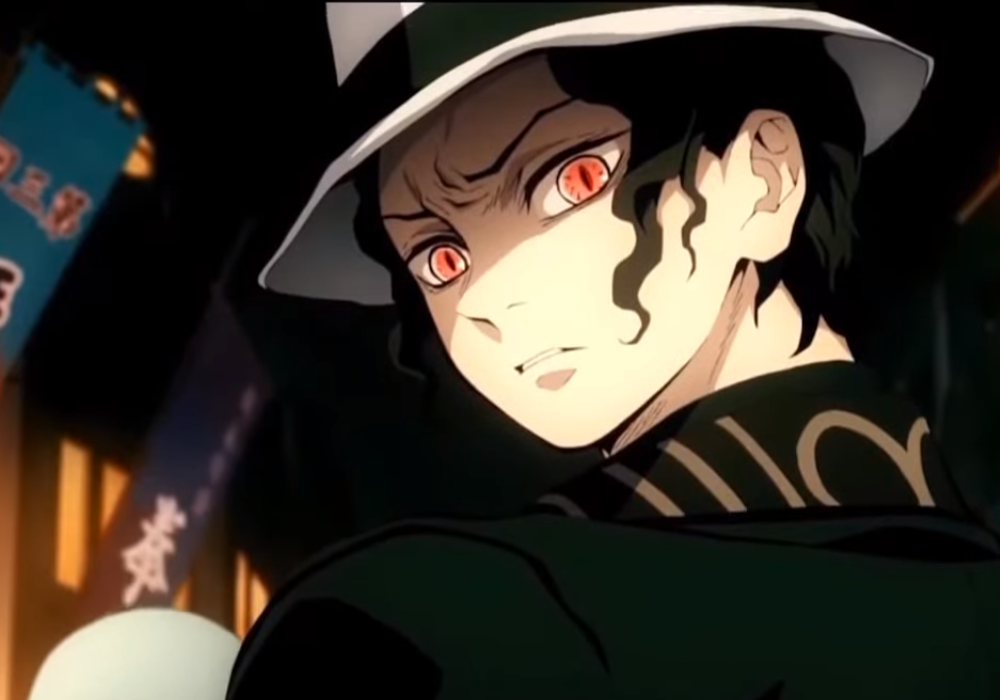 Muzan is known as the Demon King, the first of his kind, and the origin of all existing demons in the show.

Demons are the main antagonists of the show, and if you’re the progenitor of the very evil thing the good guys are fighting against, that makes you quite the villain.

And if that’s not bad enough, he’s also the leader of the twelve most powerful demons in the series called the Twelve Kizuki.

For a villain, he’s also quite stylish, fashion-wise. He’s got a nice black suit with a patterned collar, a white tie to go with his white pants, and a white fedora. We tip our hat to you for being a voguish villain, Muzan! 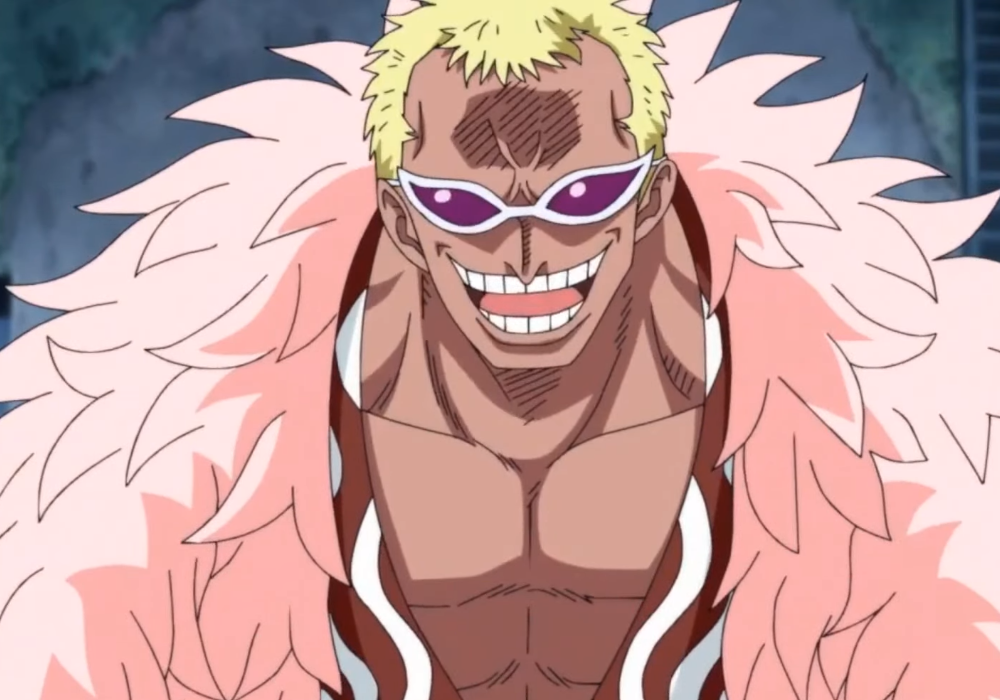 His feather coat might look fluffy and nice, but his personality is far from that!

Doflamingo has no problems with killing those who he deems as weak and even gets pleasure from the pain and misery of others.

Right after slicing off Law’s arm, he is seen standing around, smiling and enjoying the pain he has caused. 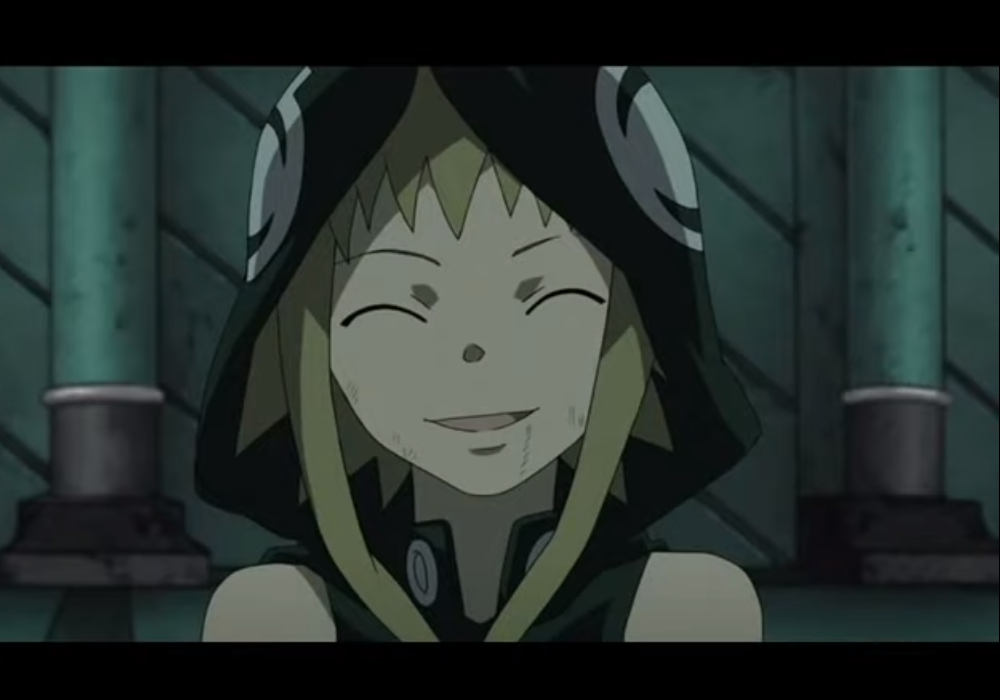 Her lack of empathy for others has made her see other people as a tool for her experiments, research, and overall goals.

She was even willing to experiment on her own child and made her kid’s living conditions absolutely torturous.

She enjoys inflicting pain to others, and given her acting skills and deception, she definitely caused a lot of pain to Soul Eater viewers.

We have to include snake man in our list somehow! With his creepy character design and voice, Orochimaru is a very effective villain early on in the Naruto series.

He wants to gain immortality, so he conducts unspeakable experiments on people. Creepy! 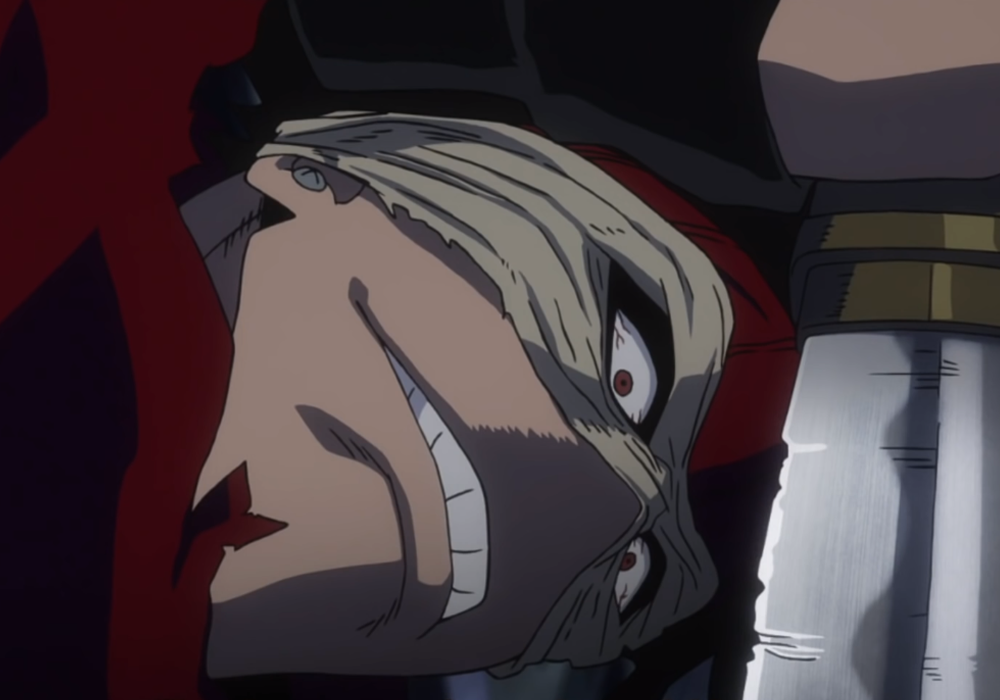 Stain is not your typical villain since he’s not being evil just for evil’s sake. He thinks a lot of heroes are not true heroes, and so he wants to cull them.

He thinks hero work is stained by people wanting to be famous and pretending to be righteous. He’s one notable villain, alright! 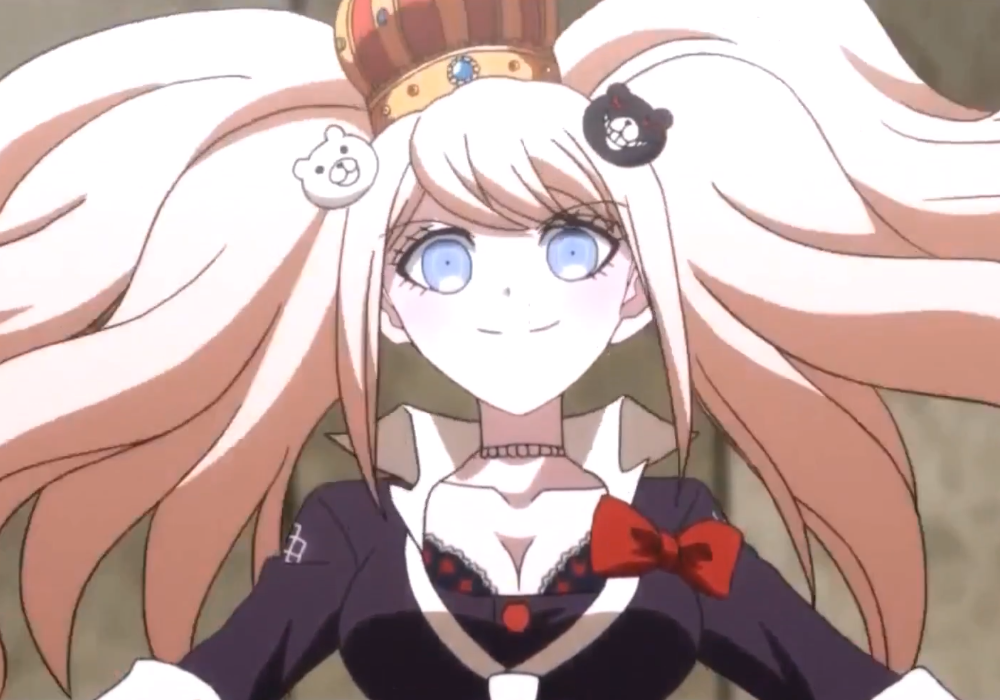 Known as a fashionista, this villain knows how to make people suffer in despair while dressing it up in style.

She is erratic and unstable, both in mind and emotions, and she thinks that the only counter to her boredom is to bring despair to others.

Her obsession with despair eventually led her to abuse and kill her sister, as well as torture her classmates. 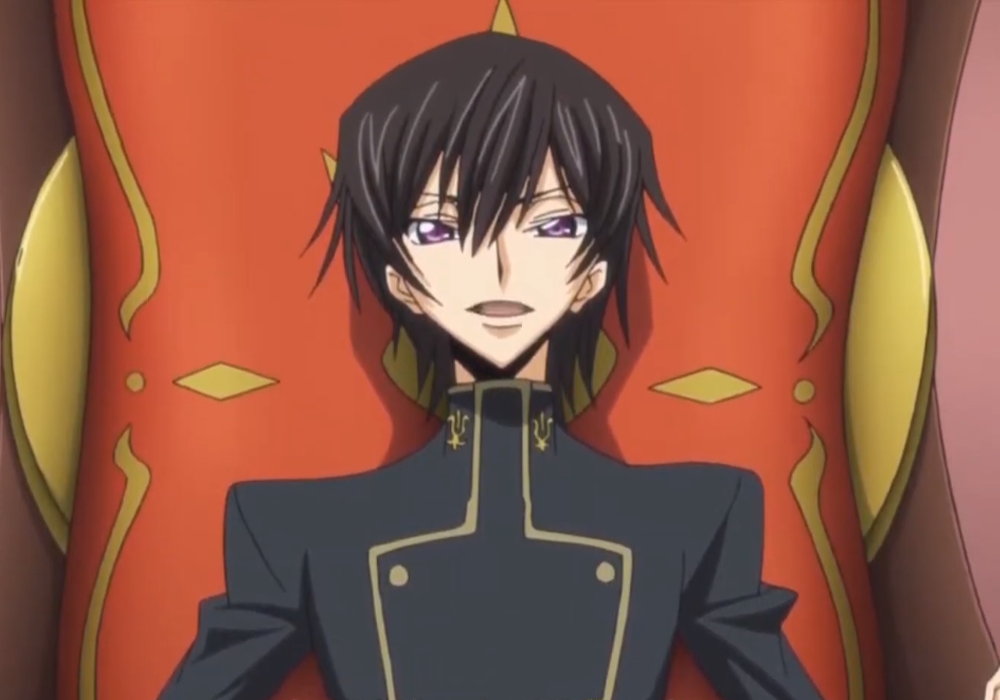 The death of his mother, his sister’s incident, and his unfortunate childhood pushed Lelouch to plan his revenge against his royal family.

Thanks to the power of Geass, he lived a double life acting as resistance leader Zero and killing a bunch of royalty and their supporters.

He knew the consequences of his actions and accepted them in the end. 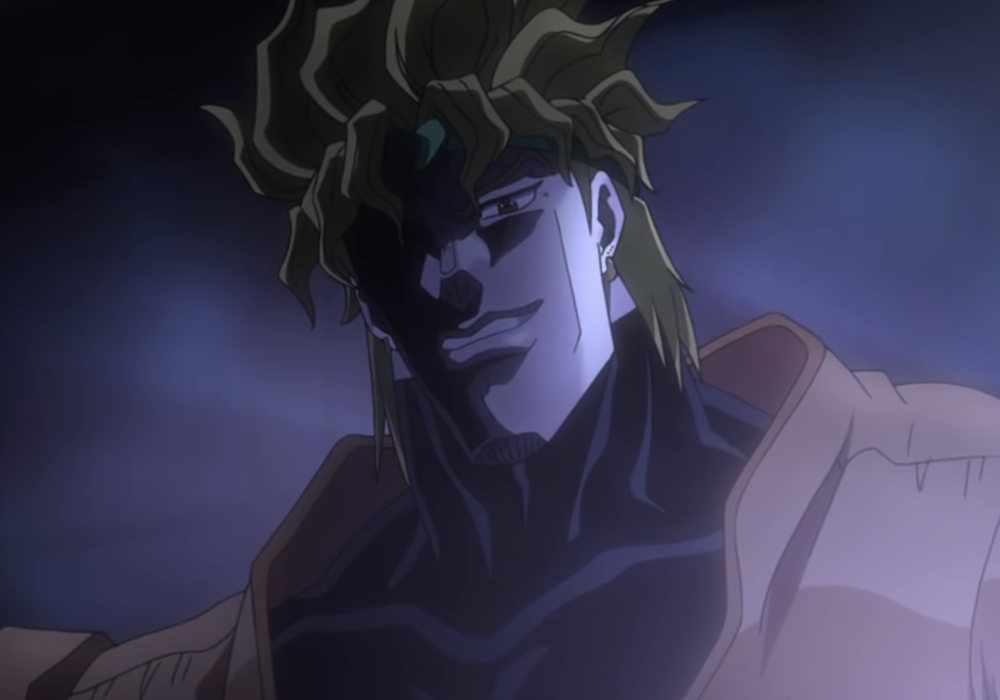 His lack of empathy and a conscience, partnered with his violent and manipulative personality, make Dio a truly evil villain.

He won’t stop until he has enacted his revenge or reached his goals, and he won’t hesitate to kill anyone in his way, no matter if they’re “family.” 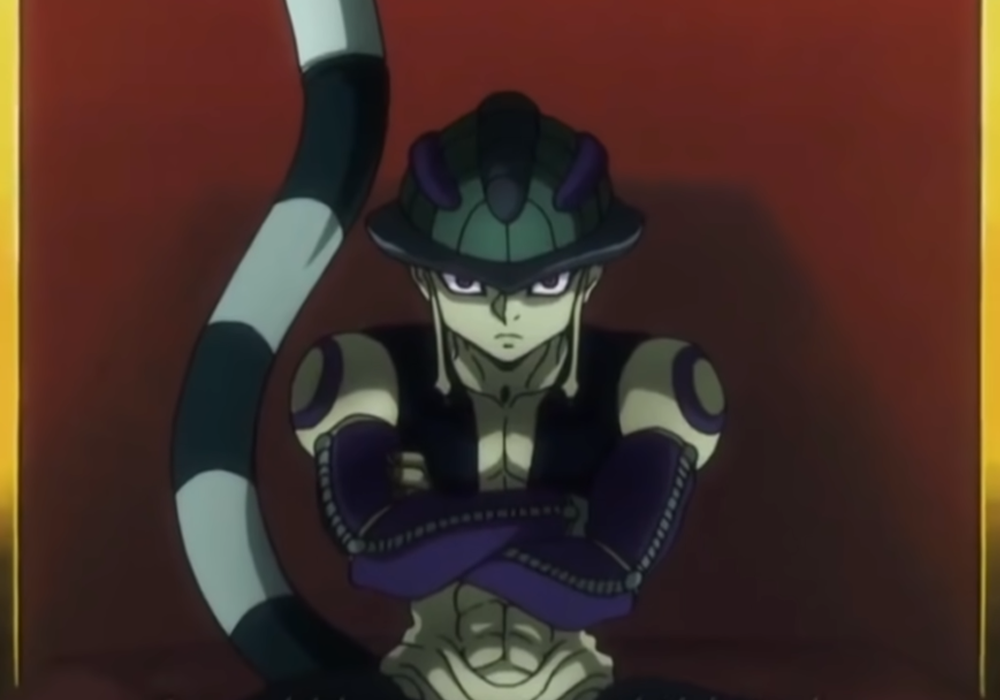 Meruem is the result of the Chimera Ant Queen’s desire to birth a powerful offspring.

Knowing his specialness, he believed to be above everyone, especially humans, and had no problem cannibalizing his fellow Chimera Ants.

He was merciless, prideful, ruthless, and an absolutely worthy villain for HxH’s Chimera arc. 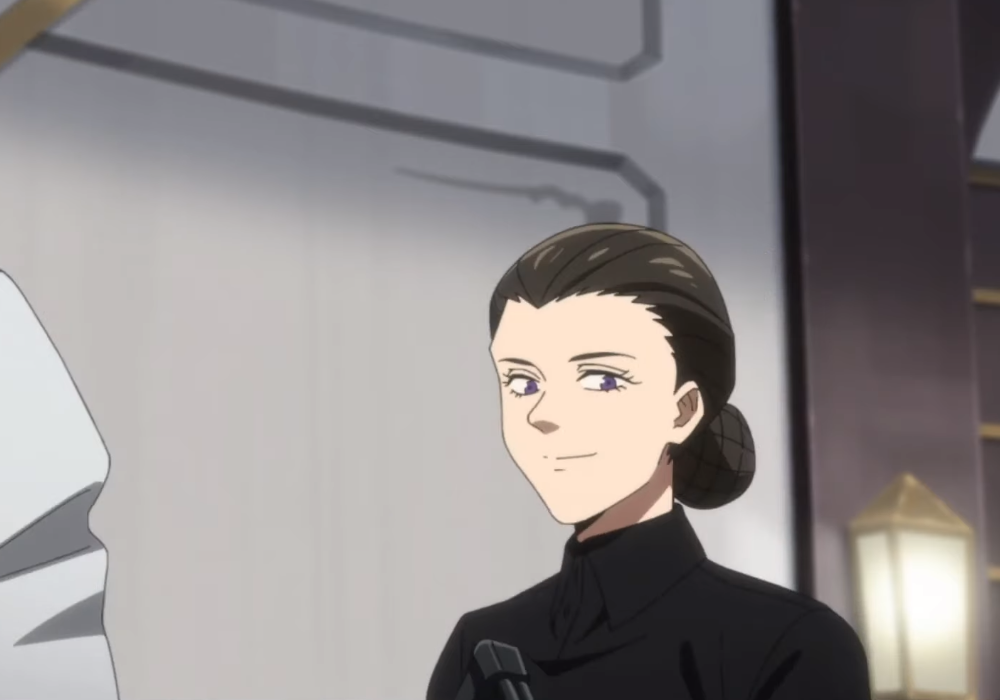 Isabella stands out as a villain due to how real her character can be. She is the “mama” or caretaker of an orphanage and appears to be loving and caring but is actually antagonistic to the children.

She doesn’t need superpowers to be scary, she only needs her wit and cunningness to stop the children in the orphanage from leaving. One look from her will make the children cower in fear.

The development, deceit, and twists of Bleach’s Soul Society arc are one of the most intriguing and engaging sagas in anime history.

At the start, Aizen presents himself as a mild-mannered and pleasant man who was investigating something and got murdered for it.

Who would do such an evil thing to a kind soul like him? It turns out he staged his own death, manipulated a bunch of people, and wanted to be the king of Soul Society. 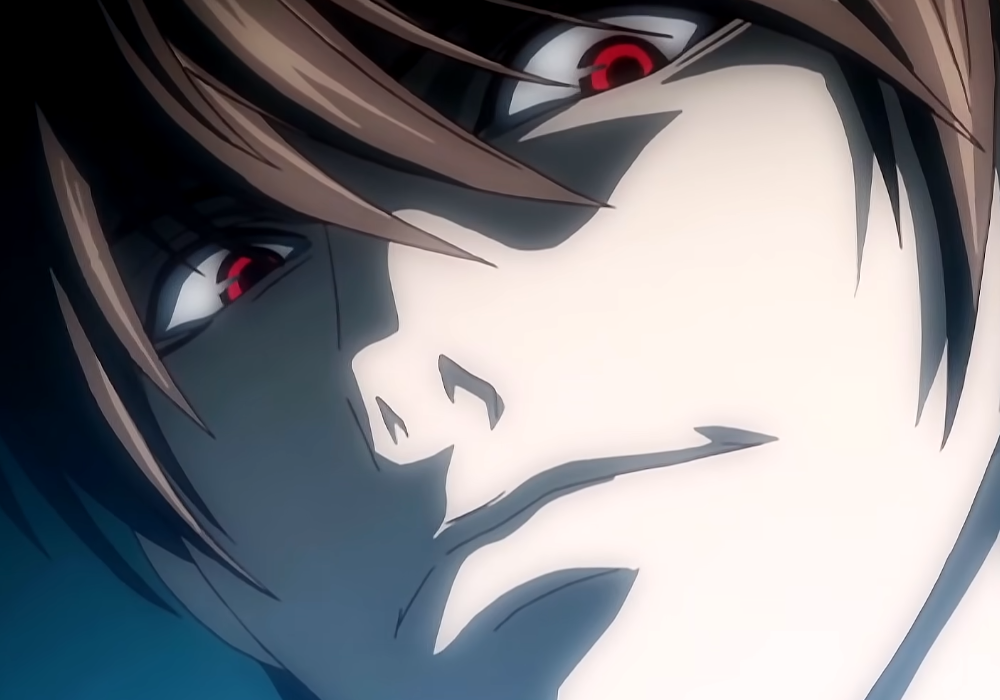 A teenager with a messiah complex goes on a rampage with a notebook that can discreetly kill anyone.

Upon gaining the power to murder anyone he pleases, he thinks he can bring forth a new era of the world by ridding those who he deems as evil.

Unfortunately, absolute power corrupts absolutely, and he became the very thing he aimed to destroy.

Light is a popular villain protagonist among anime fans and definitely deserves a spot in our list. 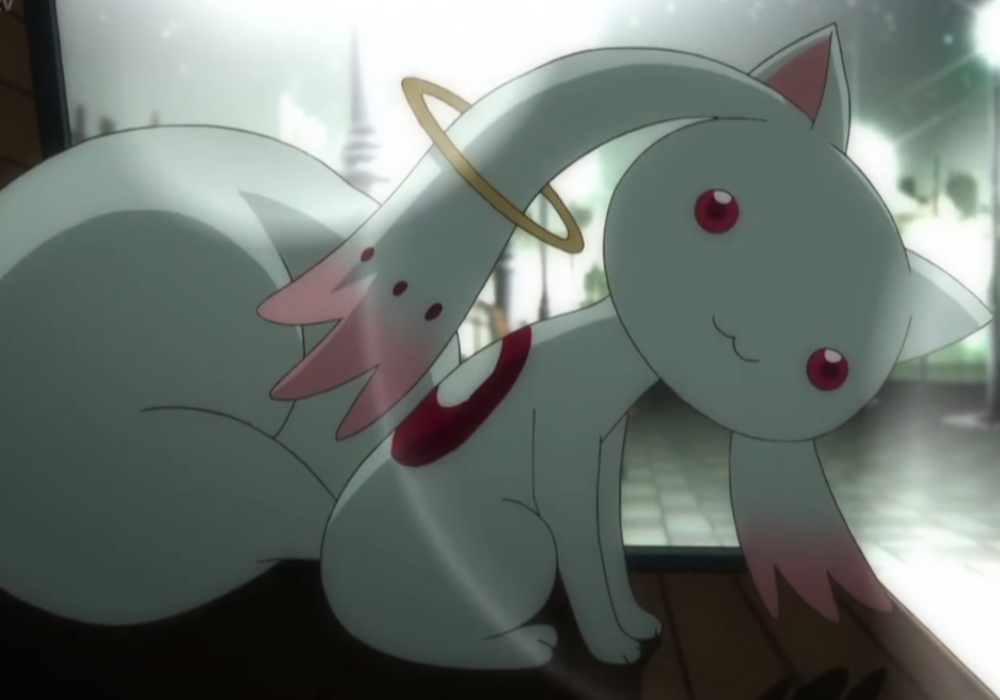 Don’t let his cute appearance fool you. Kyubey won’t hesitate to sell you dreams and false hopes just so he can acquire your soul.

He doesn’t care that he’s causing suffering to others because he only sees it as a logical means to prevent the death of the universe.

Still, his cold and uncaring nature earns him the seventh spot here. 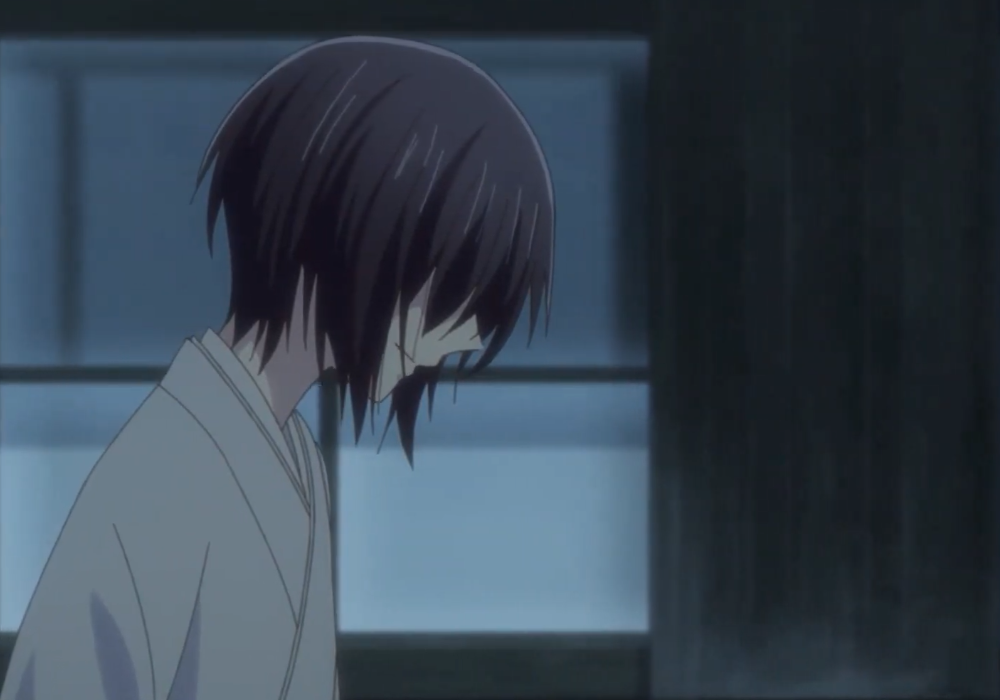 As the head of the Sohma family, Akito’s role is to be the “god” in the Chinese Zodiac story.

You would only see Akito in brief glimpses early in the show and would always be shrouded in mystery and left alone. It turns out that Akito is a woman.

Growing up, Akito’s mother harbored jealousy towards her and raised Akito as a boy.

Meanwhile, her father instilled the idea that she’s special and everyone would love her no matter what.

Because of this belief, Akito would abuse and manipulate the rest of the Sohma members just so they would stay.

Her warped upbringing is unfortunate but is not an excuse for the abuse and manipulation she did. 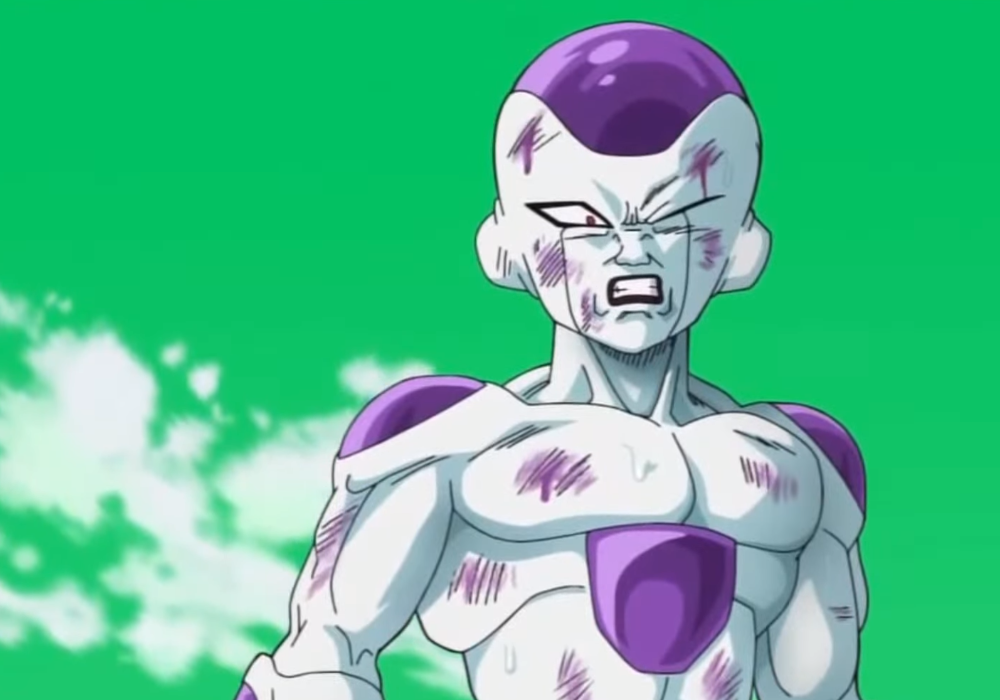 Frieza is a very iconic villain in the Dragonball series and anime in general, so we made sure to include him in our list.

One look, and you can immediately see alien emperor characteristics in his eyes.

He’s the leader of his own Frieza Force, and with his army, he controls the majority of Universe 7, which is the universe where the entirety of the Dragonball series takes place. Frieza is vain, prideful, selfish, cold, spoiled, and relentless.

He is the most recurring villain in Dragonball and will do anything to get his Emperor of the Universe title again.

He also has a very unique character design and has multiple transformations and appearances. 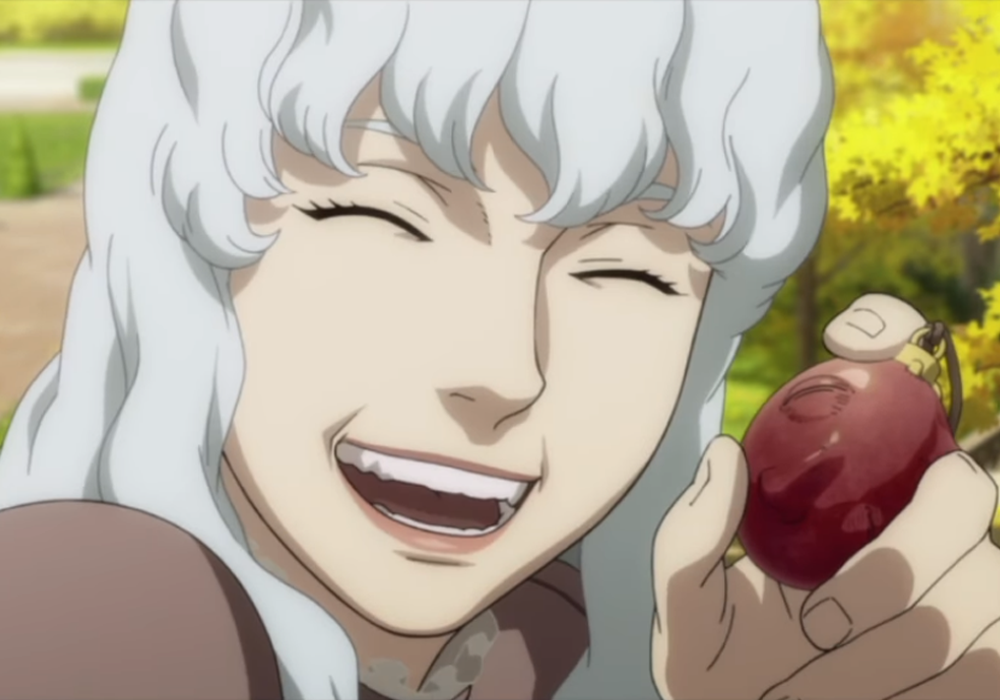 Griffith is blessed with intelligence, impressive swordsman skills, charisma, and good looks. It’s not a surprise to see him gain a lot of allies and friends.

With his smile and leadership, you’d think he treasures and respects them, but in reality, he just sees them as a means to an end.

And so, he doesn’t have second thoughts about sacrificing anyone for his goal, even if that means letting his comrades get eaten by demons. Griffith will ascend to his throne no matter the cost. 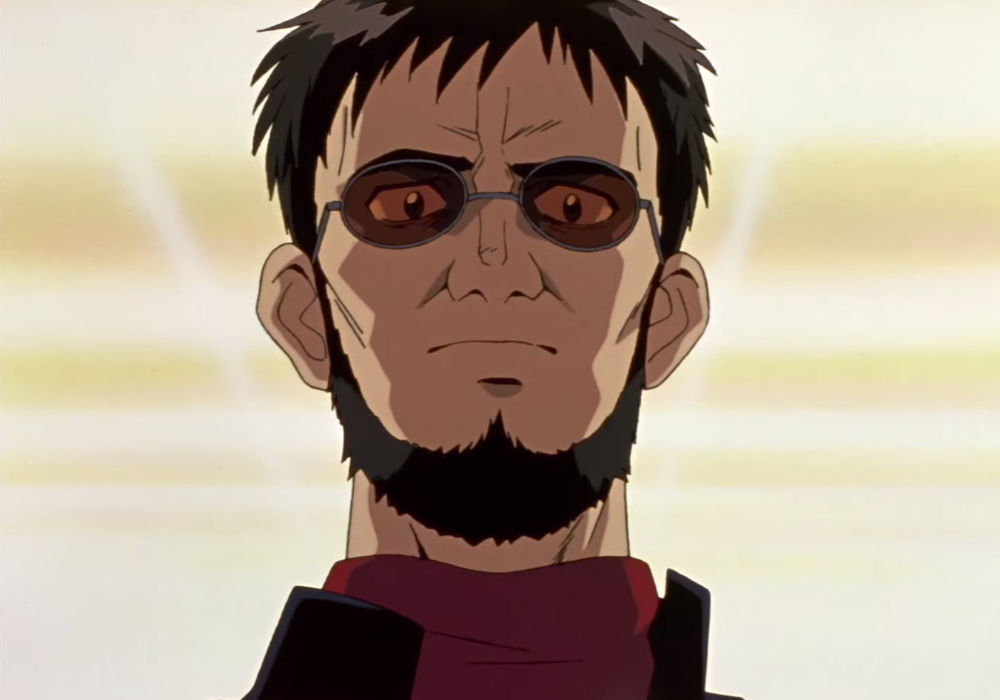 Bringing forth the end of the world, neglecting his son, and basically doing a lot of wrong and evil things are what made Gendo Ikari the third-worst villain on our list.

I know a lot of anime fans would think that Gendo Ikari did nothing wrong when in fact, he did a lot of things wrong.

Child abuse is just the tip of the iceberg for Gendo Ikari. He also abused and manipulated other characters, all for the sake of his goal.

Sure, you can argue that he’s capable of love, but using that love to ruin others is a selfish kind of love.

Suffice to say, he definitely won’t be winning any “parent of the year” awards. 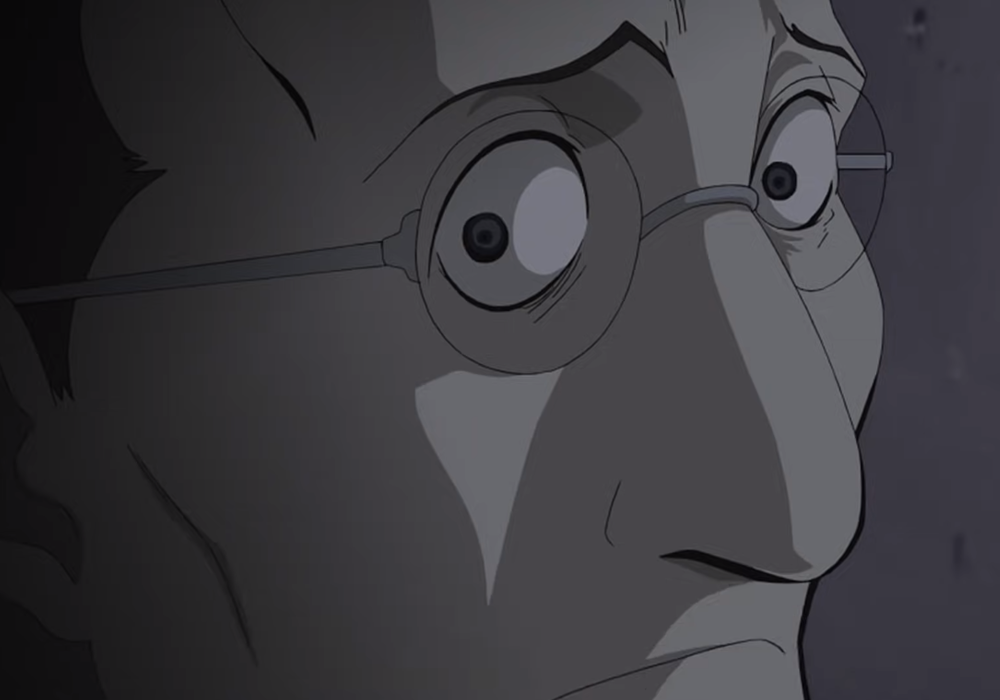 What drives a man to sacrifice his own daughter all for the pursuit of knowledge?

With Shou Tucker from Fullmetal Alchemist, he was willing to use his family all for the sake of his chimera research.

Shou Tucker was a pioneer on chimeras, having made a talking one that launched his career. It turns out that he fused his wife with another creature.

Wanting to replicate that, he fused his own daughter and their dog to make another talking chimera.

He lied about his wife leaving him a few years before the show started. He lied to Ed and Al about the true nature of his study.

He lied to Nina, his daughter, about everything. He genuinely believed that other alchemists worth their salt would do the same things he did for alchemy.

Shou Tucker has no empathy for others, not even for his own child.

The story’s author, Arakawa, even considers Tucker one of the most reprehensible characters in her series. 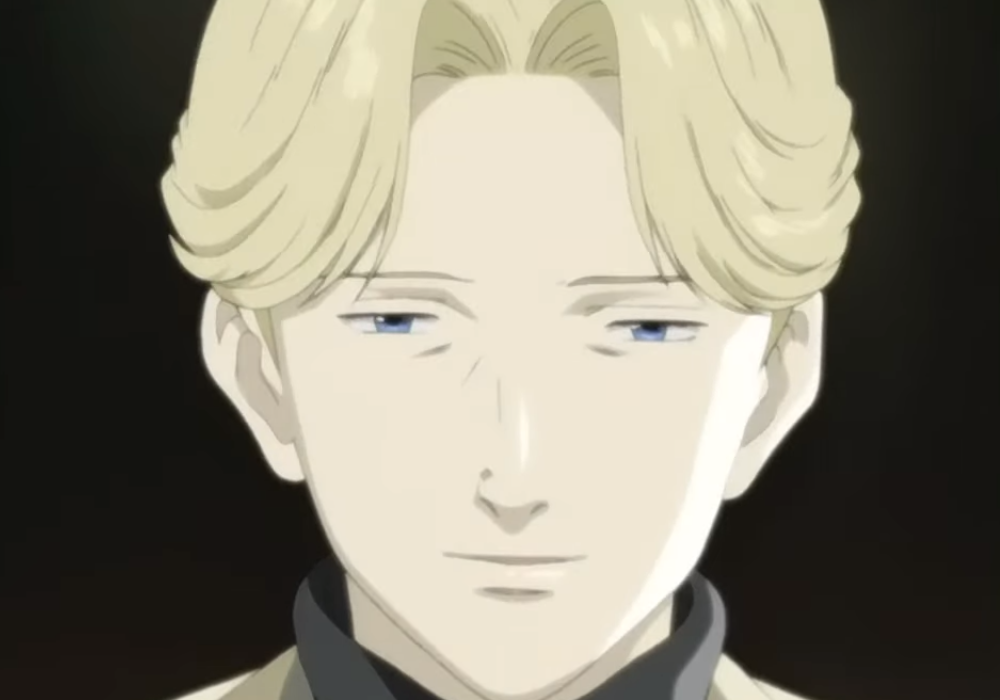 We’ve tackled a lot of notorious villains in this list already – from green aliens, hero killers, and abusers to despicable parents, demons, and self-righteous teenagers.

But the one that we have crowned as the worst one, which makes him the best villain in this list, is Johan Liebert from Monster.

Johan is a product of a eugenics program and was planned to lead humanity into a better world. He suffered abuse from his handlers, which probably molded him into a cruel and sadistic sociopath.

The truly hair-raising aspect of him is how nice, pleasant, and helpful he seemed to people.

His front is an empathetic, kind, and soft-spoken young man, and a lot of his victims fall for this act, only to realize later how manipulative he truly is.

He also grooms serial killers, and by the end of the series, he tricked a lot of people into killing each other.

He doesn’t have a magic book, a magic eye, robots, or superpowers. All Johan Liebert has is his wit and drive to do evil, and we find that absolutely chilling.