If you’re an anime fan who’s feeling nostalgic about the past, let’s take a trip down memory lane with today’s Nerdbear article.

We’re exploring these excellent black and white anime – from early works that need to be preserved for historical purposes to modern artistic experiments on animation.

Let’s take a break from bright colors for a sec and enjoy the beauty of black and white anime. 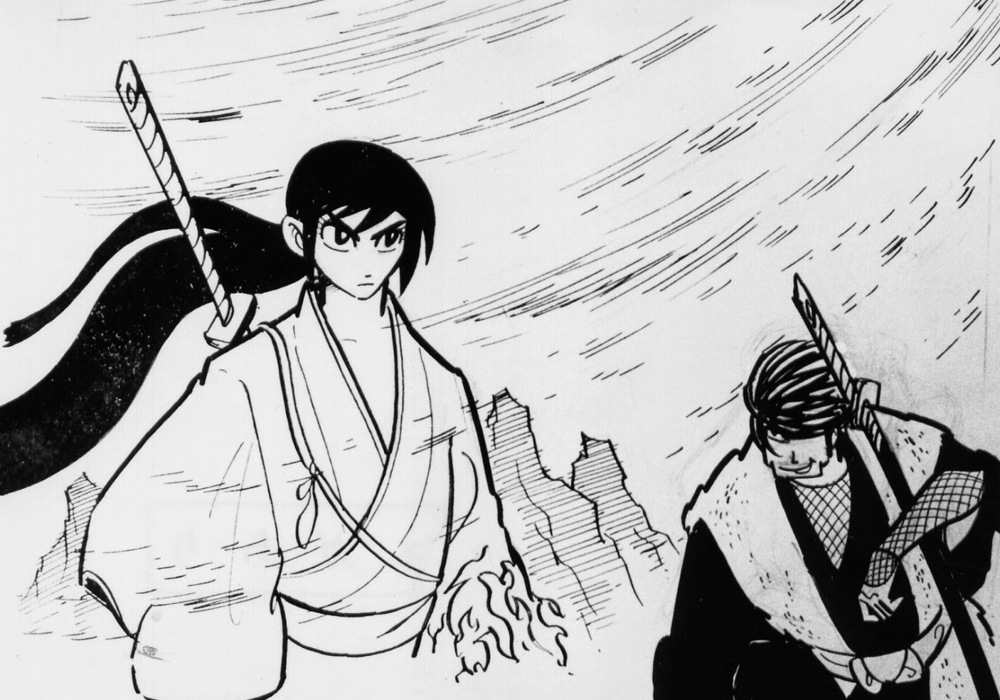 Our first entry is definitely a unique one. Instead of a fully animated film, Nagisa Oshima’s Band of Ninjas is a series of static drawings with camera movements and voices that give it a dynamic flare.

It’s a story about a young boy who joins a band of ninjas during a tumultuous time. A peasant uprising happens, and the boy has to do what is necessary to live.

Its style and subject matter will definitely leave an impression. 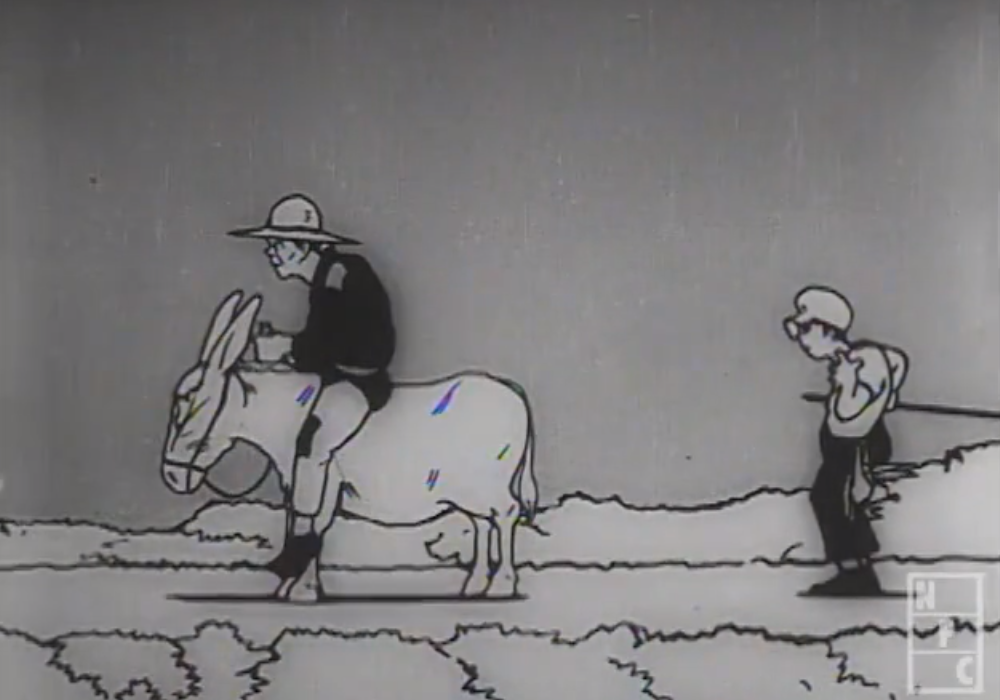 It is definitely hard to please everyone, especially when everyone has an opinion on how you should treat your donkey!

Yasuji Murata’s The Donkey tells the story of a father, a son, and their donkey. They try to bring it to the market to sell, but along the way, people keep telling them what to do.

Should the father ride the donkey? Should the son ride instead? Should both of them relieve themselves from walking? How about carrying the poor donkey?

In the end, they lost what they had. 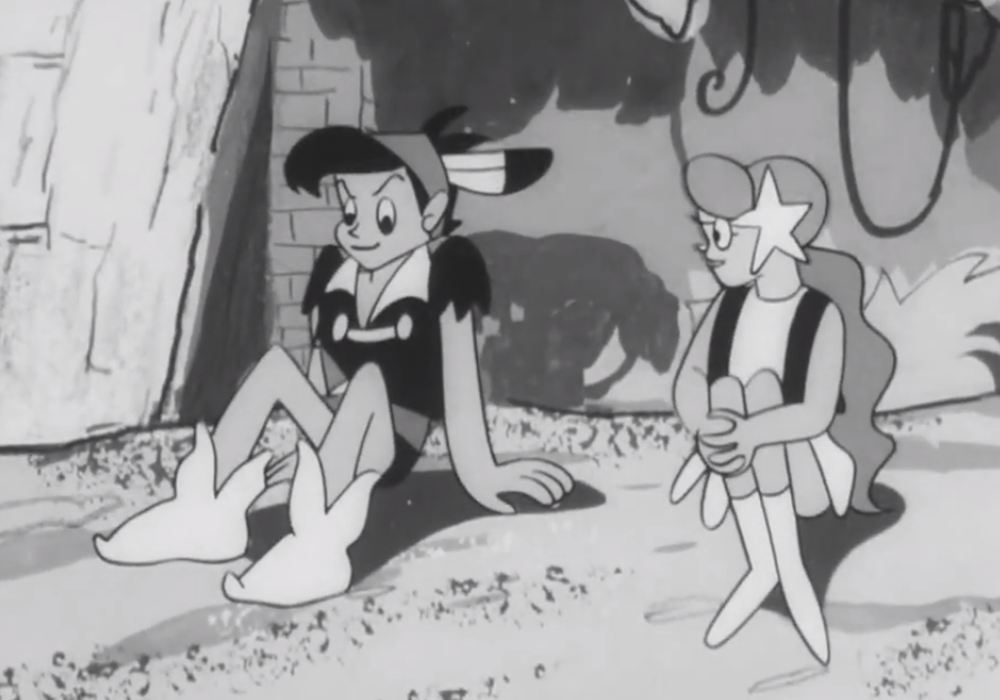 Kid thought he had everything he wanted in his tiny tropical paradise in the Caribbean. He has a dad and many animal companions. Sun, sea, and family – what more could you need?

But his reality got turned upside down when his dying father revealed that he’s not actually his son. It turns out that Kid’s father is the great Captain Morgan!

Now Kid has to set sail to find out who he truly is. 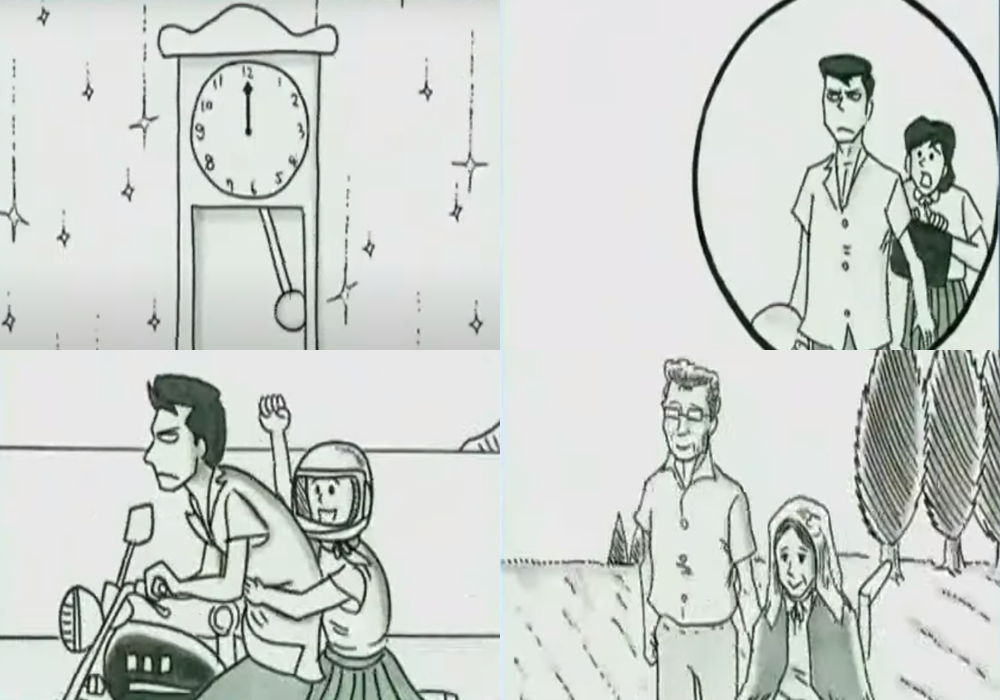 Life definitely has its ups and downs. And for a delinquent guy and a sweet gal, things can feel like a roller coaster ride.

This black and white short video animation comes from the mind of comedian Tekken. Although it is only four minutes in length, it is jam-packed full of funny and heartwarming sequences of the two characters’ lives together.

Life does feel like the swinging of a pendulum sometimes. 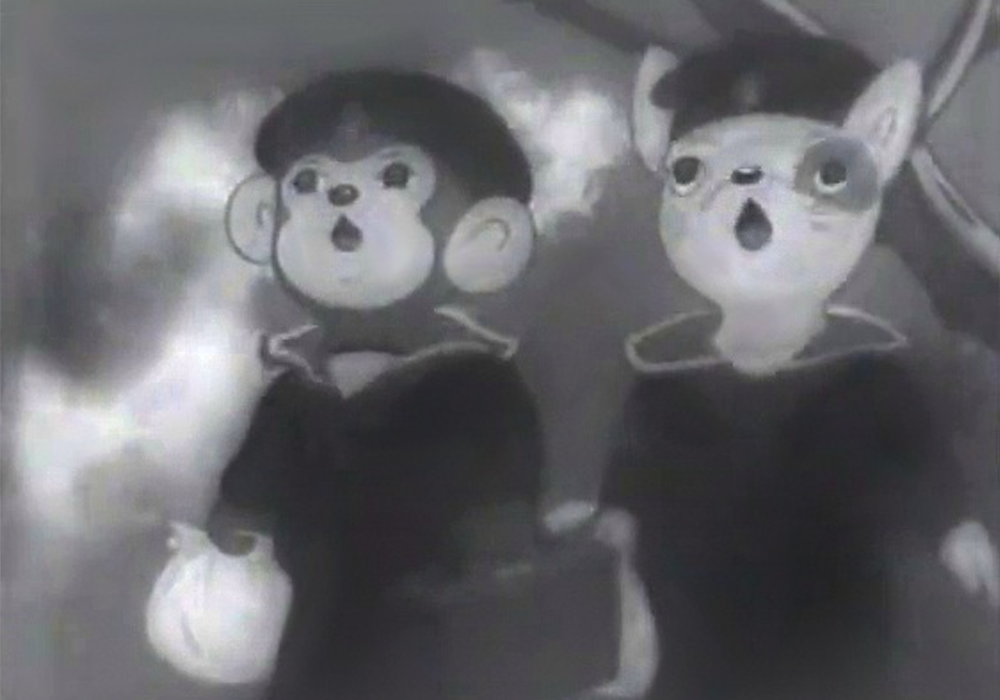 It tells the story of Captain Momotaro and his animal companions as they land on a Pacific island. They teach the natives their language and show what to do during war.

All in all, despite the cartoon animals and the AIUEO song, the movie is a grim reminder of humanity’s past. However, the movie definitely has a place in art history discussions. 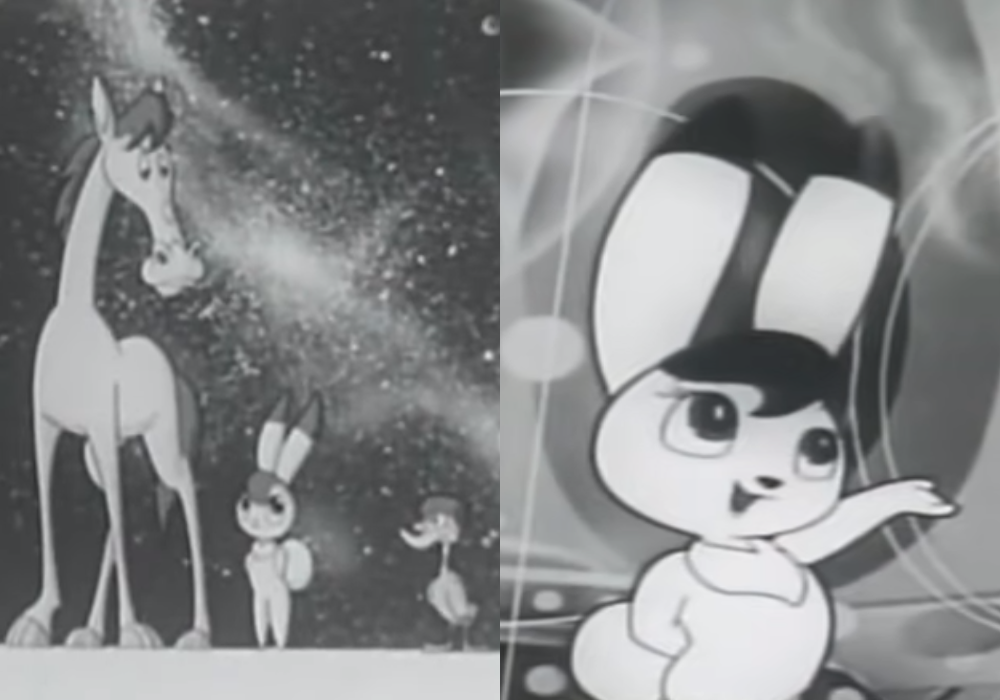 Although Osamu Tezuka is mostly known for his Astro Boy work, he definitely penned and drew other stories. Wonder 3 is one of them!

The story shows three aliens that are sent to investigate the planet Earth. They are to judge whether the planet needs to be destroyed based on how threatening it truly is to the rest of the universe.

Upon landing, the animals transform into a bunny, a horse, and a duck. Despite the cute characters, the story actually tackles serious topics on ecology and poverty. 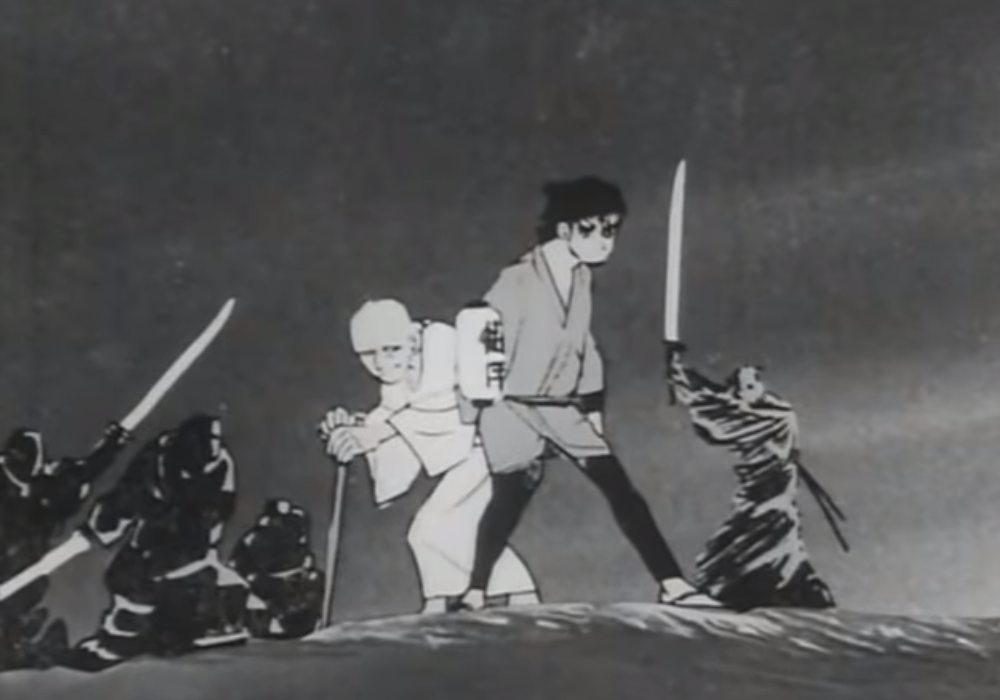 Want a detective black and white anime but with a samurai twist? You might enjoy this next entry!

Shotaro Ishinomori’s Sabu and Ichi’s Detective Tales is a story about a young investigator during the Edo period and his blind swordsman companion.

Together, they roam Edo, Japan, helping common folks with their problems. They solve mysteries and murders here and there while also dealing with people from their past. 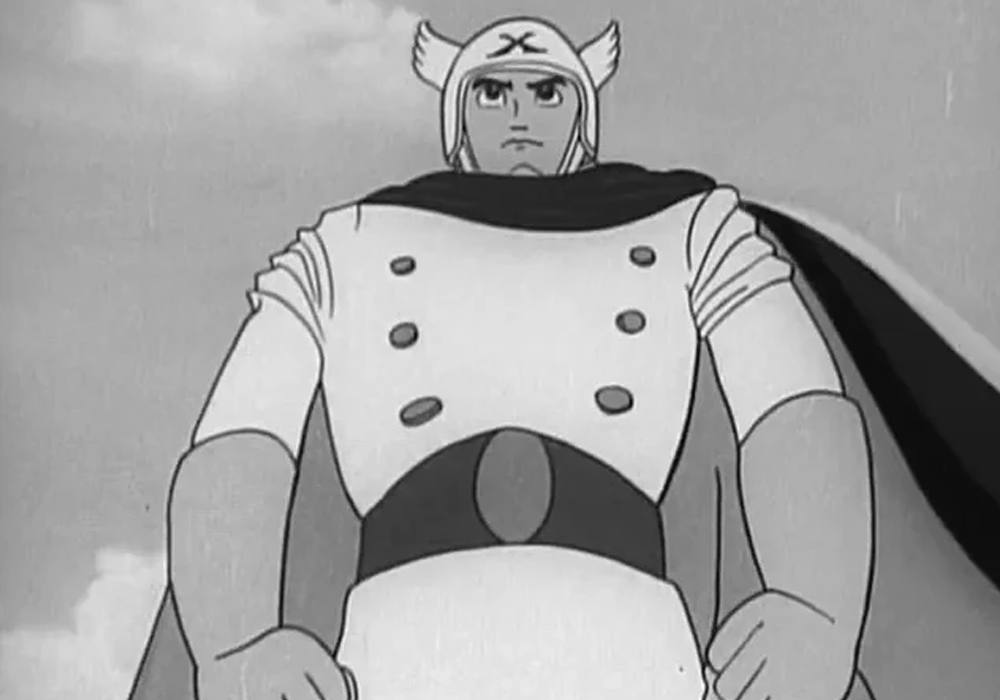 Another one of Osamu Tezuka’s works joins our list. And we haven’t even reached Astro Boy yet!

Yep, the Father of Manga is full of masterpieces. With this one, it is based on the troublesome experiments done by the Germans during World War II.

A scientist is forced to develop a weapon by the Germans. However, he grows untrustful of them and delays the project due to concerns.

He gets killed by the Germans but is able to hide and implant the weapon info into his son before dying.

Many years later, his grandson protects this weapon, called the Big X, from nefarious organizations who want it to rule the world. 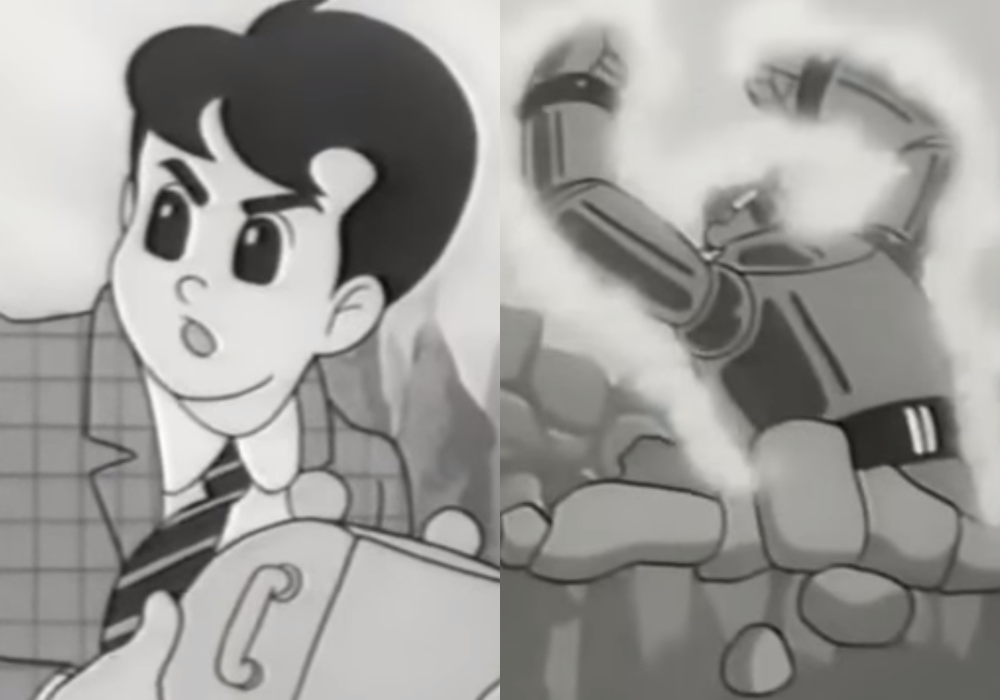 It seems like Japan has always had a fascination with big robots controlled by humans. Even back in 1963, this was such a popular and loved idea by kids and grown-ups alike.

Tetsujin 28 is about a young boy and his giant robot. After World War II, the robot weapon his dad invented didn’t have any use anymore since the war ended. And so it was passed on to him.

The robot was given the name Tetsujin 28. With the boy’s intellect and the robot’s high-tech capabilities, a myriad of adventures come along the way.

Oh, and it got an English dub and tried to break into the US market. But since Iron Man was already a thing, it got renamed as Gigantor instead. 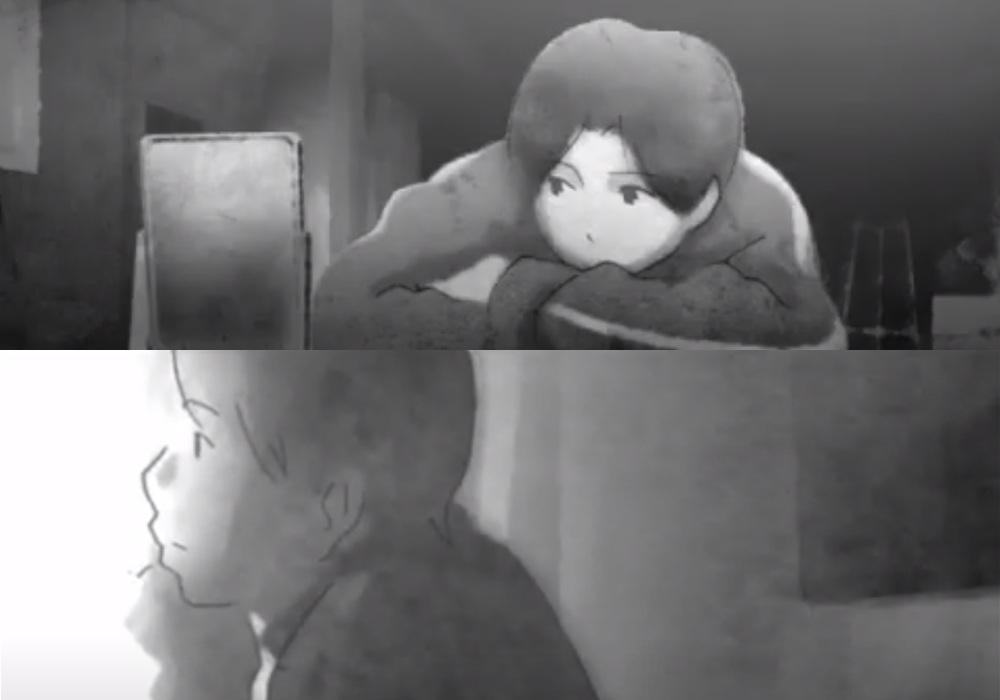 Let’s take a break from all the robots and fighting and have something mellow for this entry.

Kagami no Genon is a short amateur movie created by Kojiro Shishido.

Kojiro wanted to tackle the relationship between light and shadow in our world and present it in such a delicate way. Along with the delightful animation, you get a wonderful soundtrack from Kojiro as well. 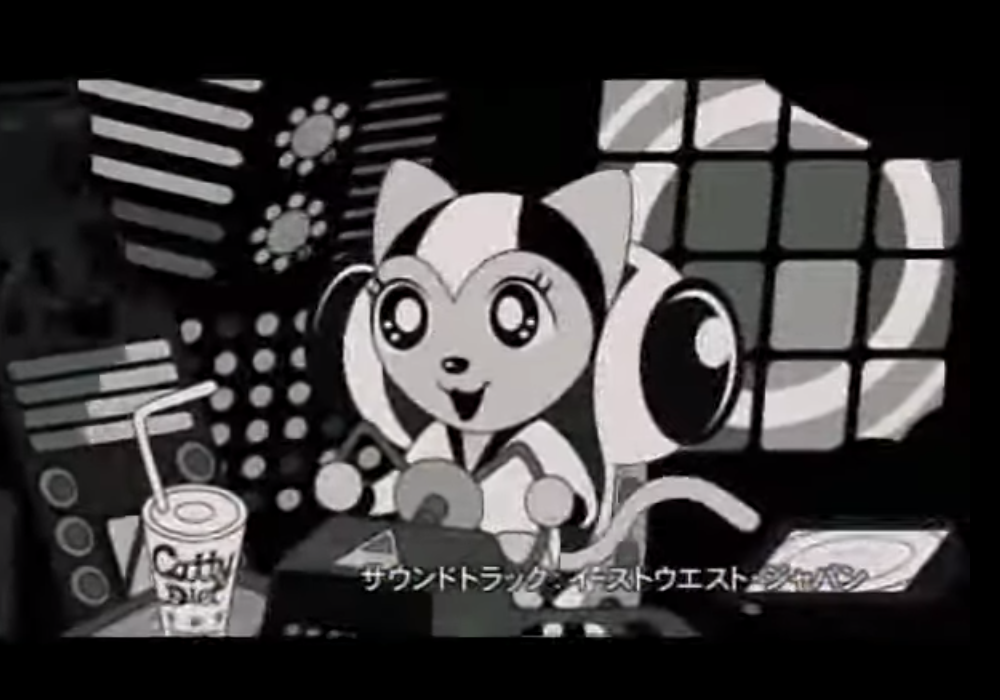 Buckle up because this entry is about to get really weird.

Tamala 2010 is written, produced, directed, and designed by a one-man team by the name of Kentaro Nemoto. It’s about a cat named Tamala and her adventures in space.

Tired of her home, Tamala gets on a rocket ship, flies to space, and ends up on a planet with cats and dogs.

She meets a brotherly cat, but they end up being pursued by a vicious dog. Tamala ends up getting bit and eaten by the dog.

Cults, company meetings, and sacrificial rituals add to the mix. In the end, Tamala shows up alive and leaves the planet. 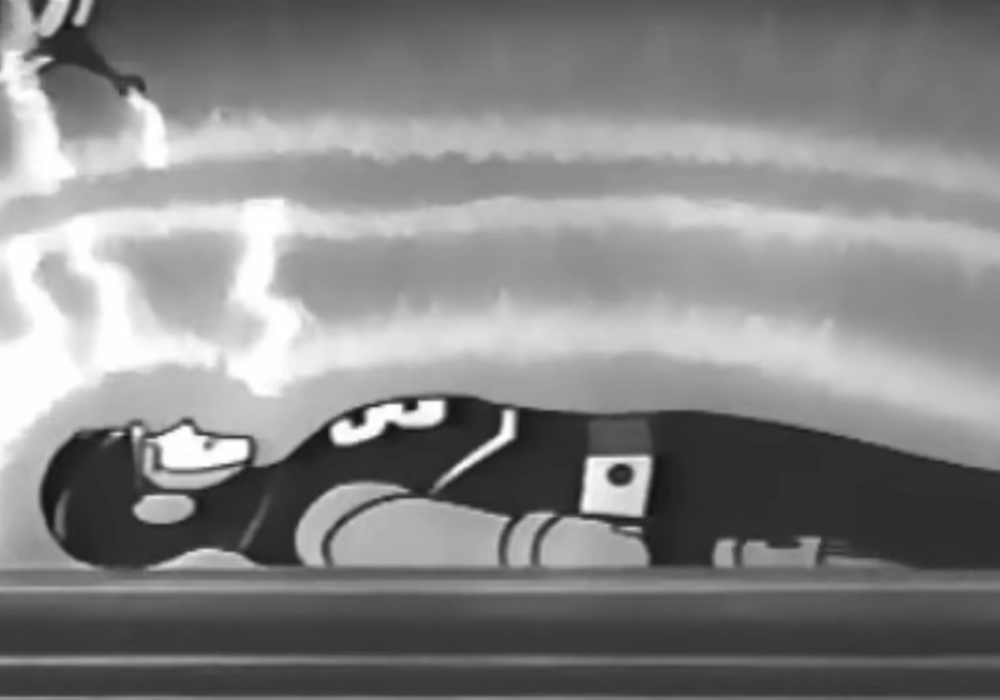 8 Man starts as a detective who got killed by criminals. To save his life, a professor attempts to take his life force and transfers it to an android body. Luckily, the operation went well.

With his new body and superpowers, 8 Man continues his detective work to save and protect people. He even eventually caught the criminals responsible for his death! 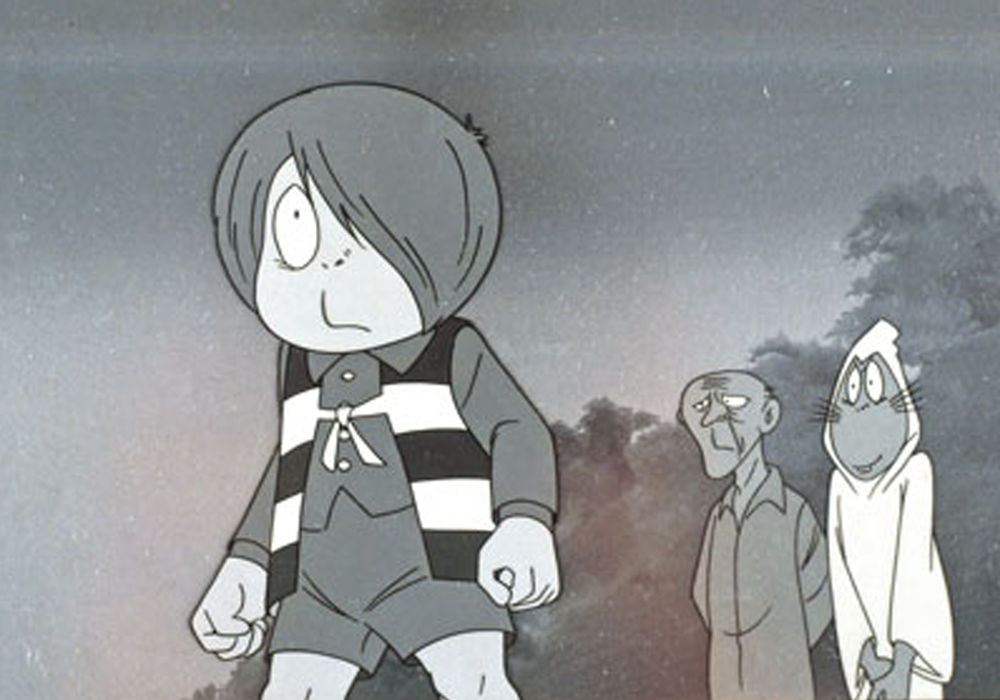 We’re going ghost in this next entry!

GeGeGe no Kitaro is about a boy who’s the last survivor of the Ghost Tribe. He faces lots of ghouls and mythological beings from Japanese folktales and stories. 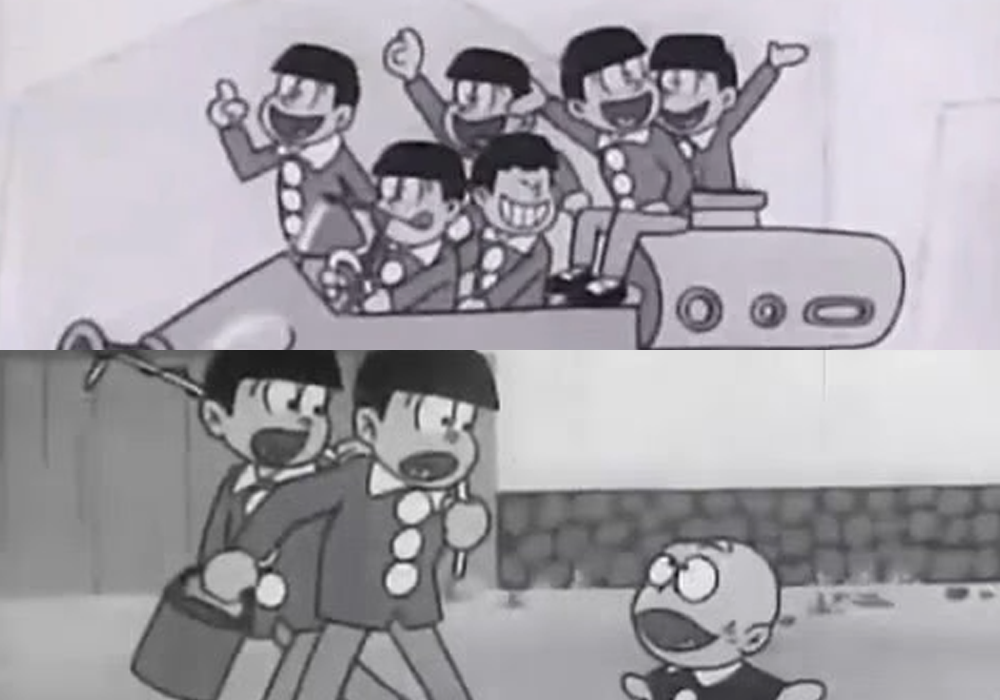 Osomatsu-kun (1966) is the first adaptation of the Osomatsu-kun manga series. It follows the story of sextuplet brothers that get into different hijinks and mischief time and time again.

Other than the brothers, we have their cheeky friend Chibita, the Francophilia Iyami, and their neighbor Totoko.

This series is quite popular, gaining another adaptation in 1988 and 2015. 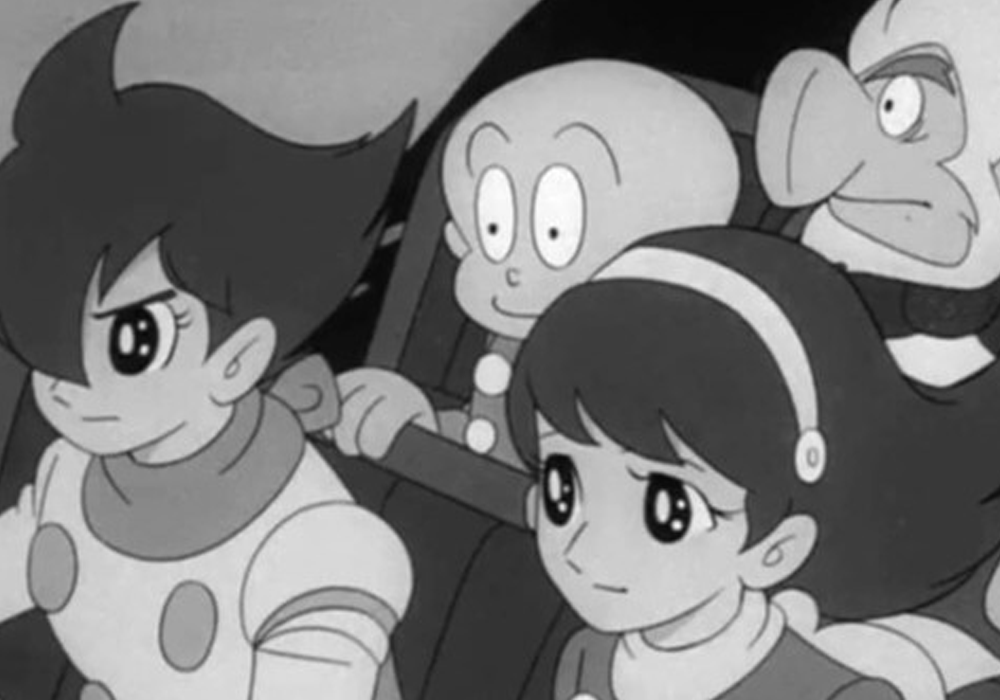 Nine people from around the globe got abducted to be turned into cyborg weapons. Thankfully, one of the scientists in the project took pity on them and let them escape.

Now, the nine work together to stop the evil organization that transformed them in the first place. The cyborgs try to intercept the organization’s plans of weapons of mass destruction and world war.

If you want a classic anime about futuristic tech, heroic deeds, teamwork, and found family, give Cyborg 009 a try. 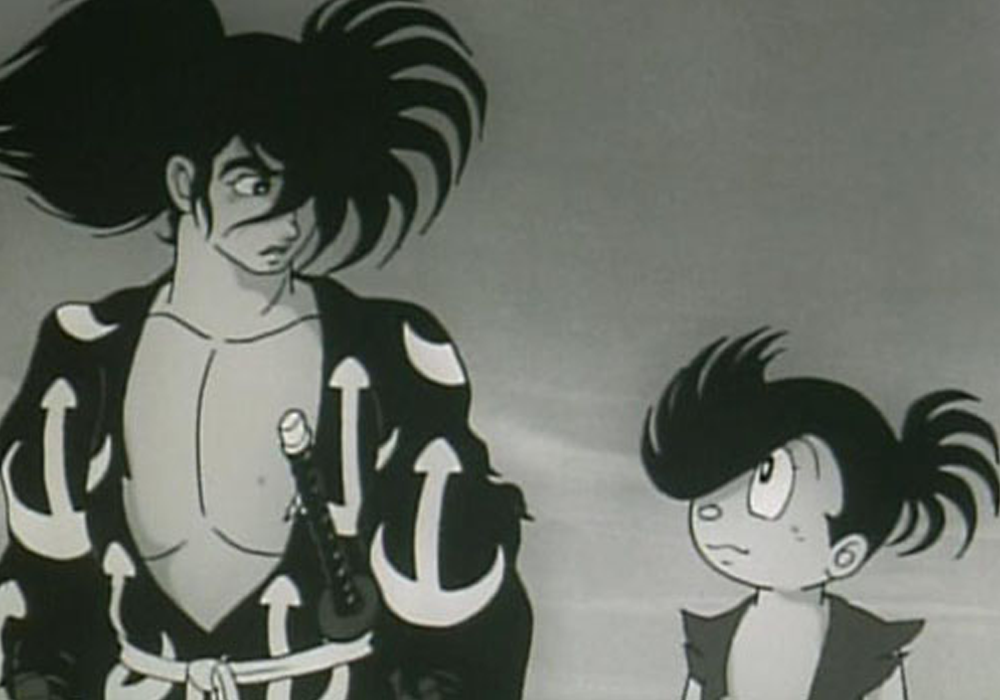 Osamu Tezuka strikes again! And this time, it’s about a ronin and a young thief.

As an infant, the ronin’s body parts were sacrificed to demons by his father in exchange for power and wealth. He was even thrown away by his family.

Luckily, a kind medicine man found him and gave him working limbs. Now, he has to wander as a ronin and kill demons to get his body back.

Along the way, he meets an orphan kid who gets by through thieving. This kid’s past seems to be of a mysterious sort as well.

If you want to see swordfighting, demons, and found family in stellar black and white animation, Dororo is worth the watch! 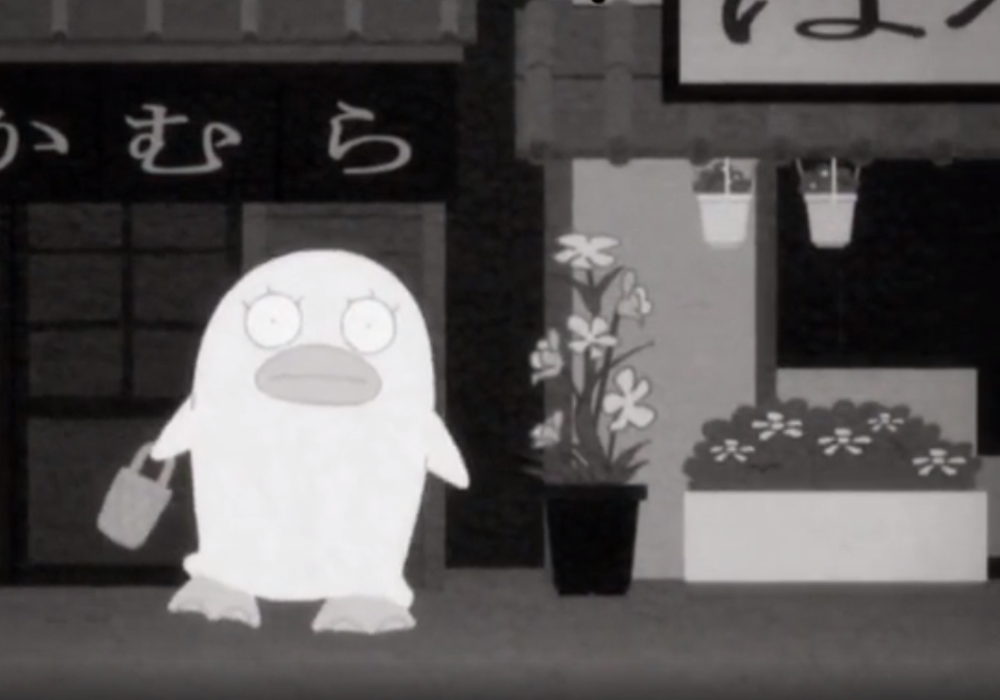 Gintama isn’t exactly a black and white anime, but this goofy series can get quite experimental!

In its 156th episode, it opens the anime with a black and white short story of Elizabeth.

Katsura asks Elizabeth to go buy him some shampoo – he has quite the luscious locks, after all. Along the way, Elizabeth gets repeatedly distracted by a lot of things!

The black and white short does the early wooden animation really well. It also highlights how bonkers Gintama can get. 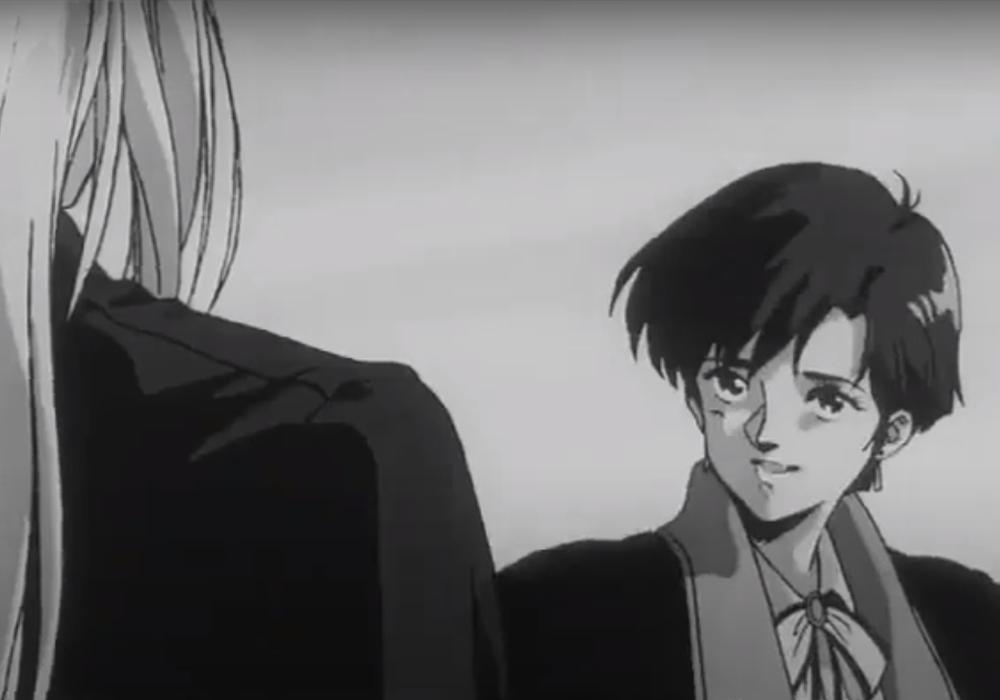 Gunbuster is about humanity’s fight against insect-like aliens who want to eradicate humans and the planet Earth. As the enemy aliens draw near, humanity has to fight back using excellent space pilots.

Same with our previous entry, Gunbuster isn’t really a black and white anime. In fact, it is just a six-episode OVA by Hideaki Anno, who is known for his later work on Neon Genesis Evangelion.

However, the final episode is animated in full black and white to highlight the ending and the devastating effects of space war. 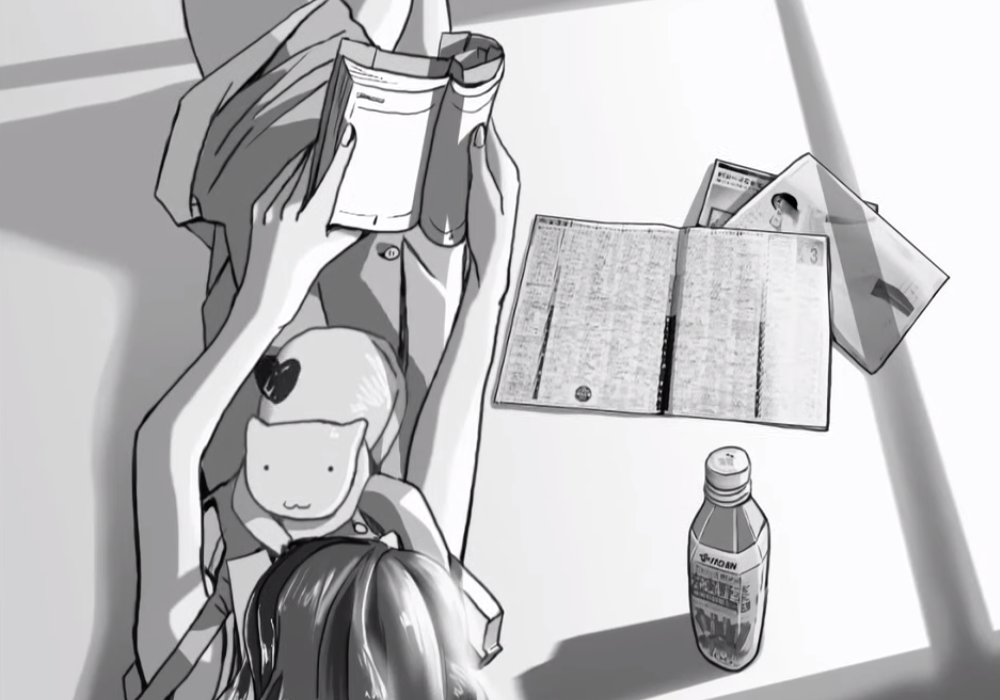 If you’ve been a fan of anime films, chances are you’ve heard of Makoto Shinkai already. The Garden of Words, 5 Centimeters Per Second, and Your Name are just some of his critically-acclaimed movies.

But before all that, there was She and Her Cat. It is a five-minute short story animation about a girl and her pet cat. It is told from the perspective of the cat and highlights their relationship.

If you absolutely love your pets and how they can be a source of comfort during trying times, prepare some tissues for some probable tears when watching this. 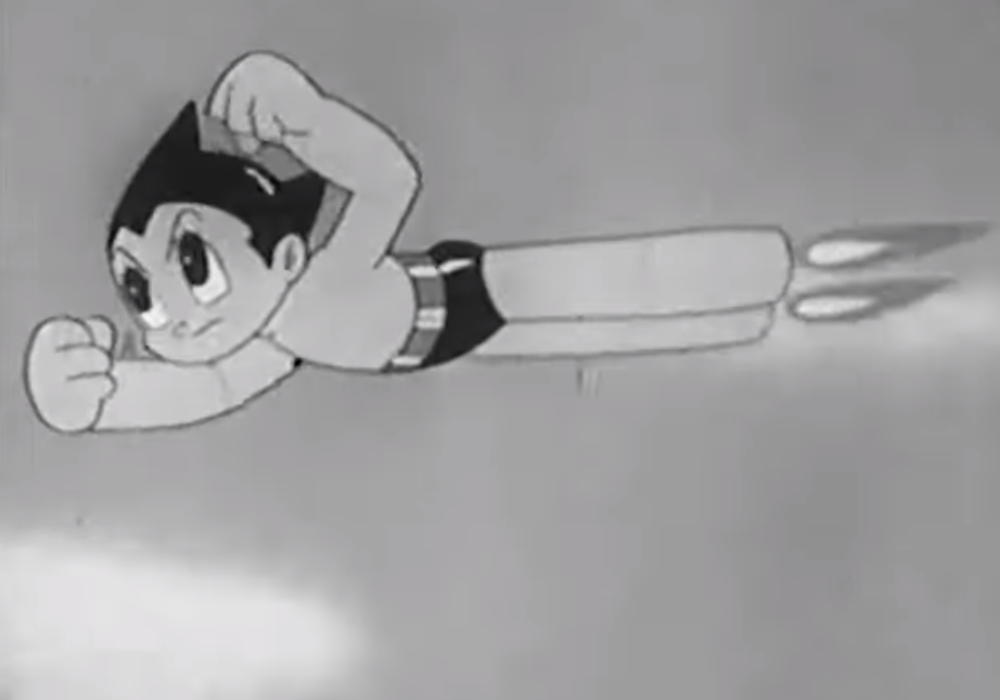 Now for Osamu Tezuka’s magnum opus – the mighty robot Astro Boy gets the top spot on our list!

Set in a high-tech future, Astro Boy is about a robot created by a scientist, Dr. Tenma, to replace his deceased son.

Unfortunately, since a robot boy cannot ever be a human boy, Dr. Tenma and Astro Boy have it rough at first.

Eventually, the doctor comes to terms with how Astro Boy is his own “person,” and they reconcile. Astro Boy also develops his robot powers to fight evil.

Astro Boy is a highly popular work that has spawned numerous adaptations. But if you want to watch the classic, Astro Boy (1963) might be a good place to start.