Our featured characters are a bit… crabby. No, they’re not grumpy at all! They’re just the pinchy kind.

If you’ve ever wondered how many crab Pokemon there are and how they fare against each other, stats, and character design-wise, this article might be able to shed some light to your questions.

Ready to go on a Pokemon journey to the seas today? Aye, crab-tain, let’s go! 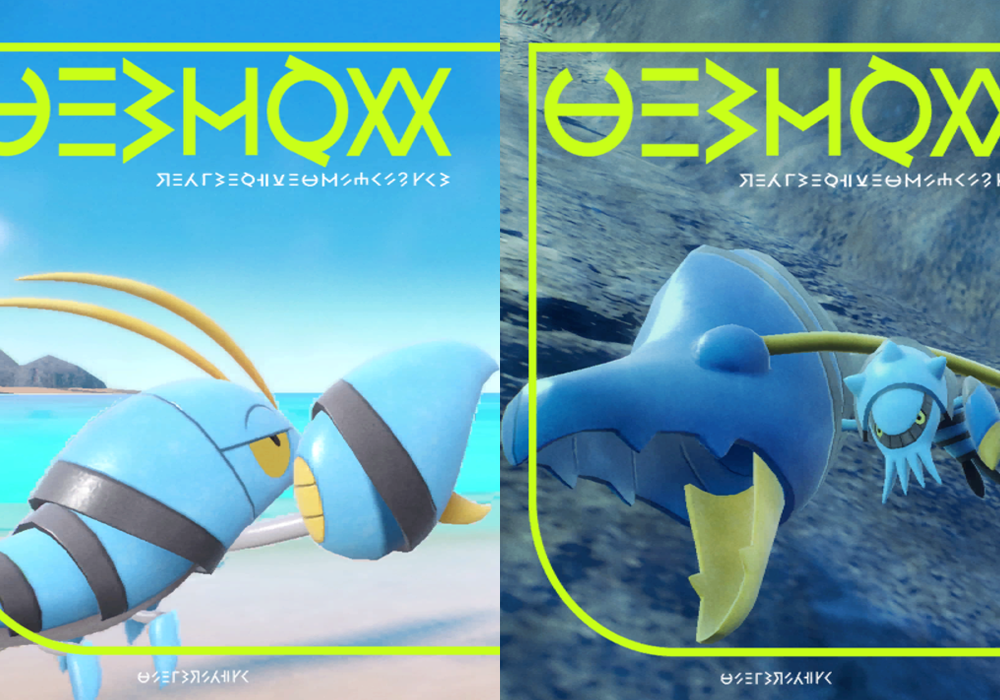 These two aren’t exactly crabs but rather pistol shrimps. But since they’re in the shellfish and crustacean category, similar to crabs, we thought we might as well include them in the list.

Due to their huge claws, they actually have difficulty swimming straight. So instead, they fire water from their claws to propel them forward. Clawitzer can even pierce tanker hulls! Pretty neat, right?

Stats-wise, Clauncher starts off as well-rounded but gets a Special Attack boost as Clawitzer. 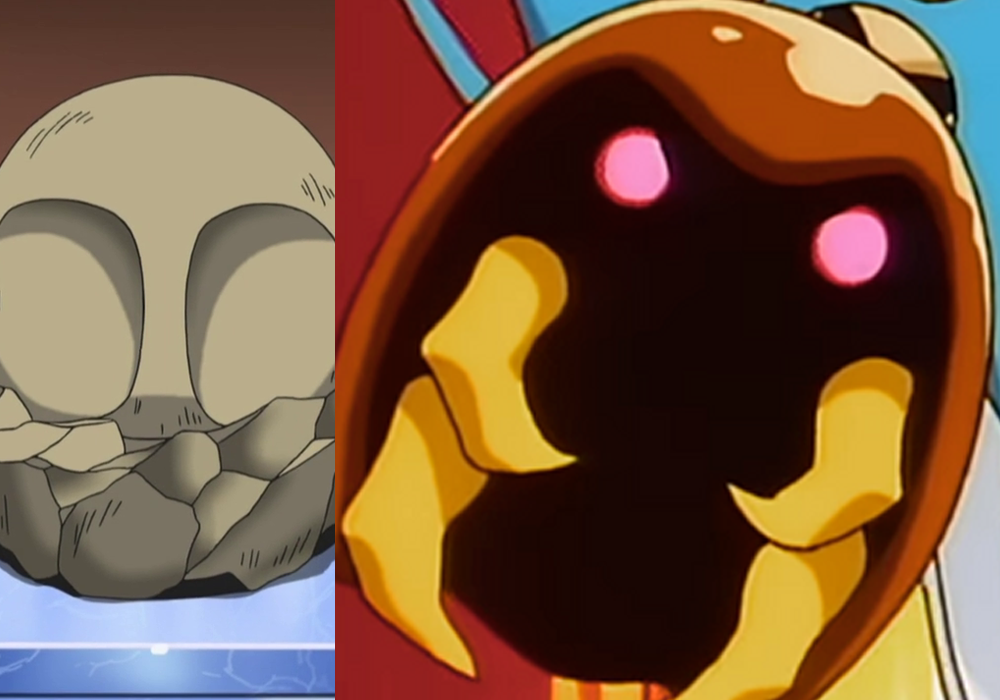 At first glance, Kabuto might not seem like a crab. But as a Fossil Pokemon, you could think of it as a precursor to modern-day crab Pokemon.

Kabuto is most likely based on horseshoe crabs. According to Pokemon lore, Kabuto was supposed to be extinct but was resurrected from fossils found in the ocean floor.

However, isolated populations were later found, although they are extremely rare!

Stats-wise, Kabuto excels in Defense. It needs to defend its life from being extinct, afterall! 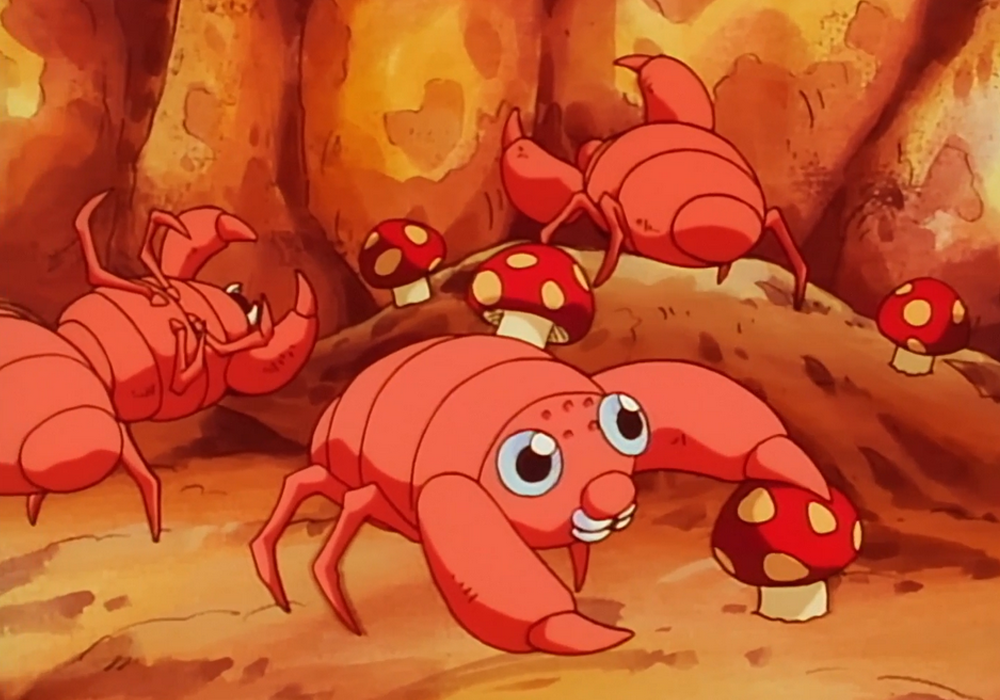 This next crab Pokemon is also of the odd variety.

Paras is actually a Bug/Grass Pokemon that looks like a crab. Instead of beaches and seas, it inhabits the forest floor.

See those mushrooms on its back? It’s called a tochukaso, and it grows on Paras like a parasite. Based on canon Pokemon info, the mushrooms actually control Paras!

The good thing about tochukaso is that it has excellent medicinal properties and can even extend life.

Combat-wise, Paras has a lot of weaknesses due to its typing. I guess it’s for the best that it goes back to mushroom growing. 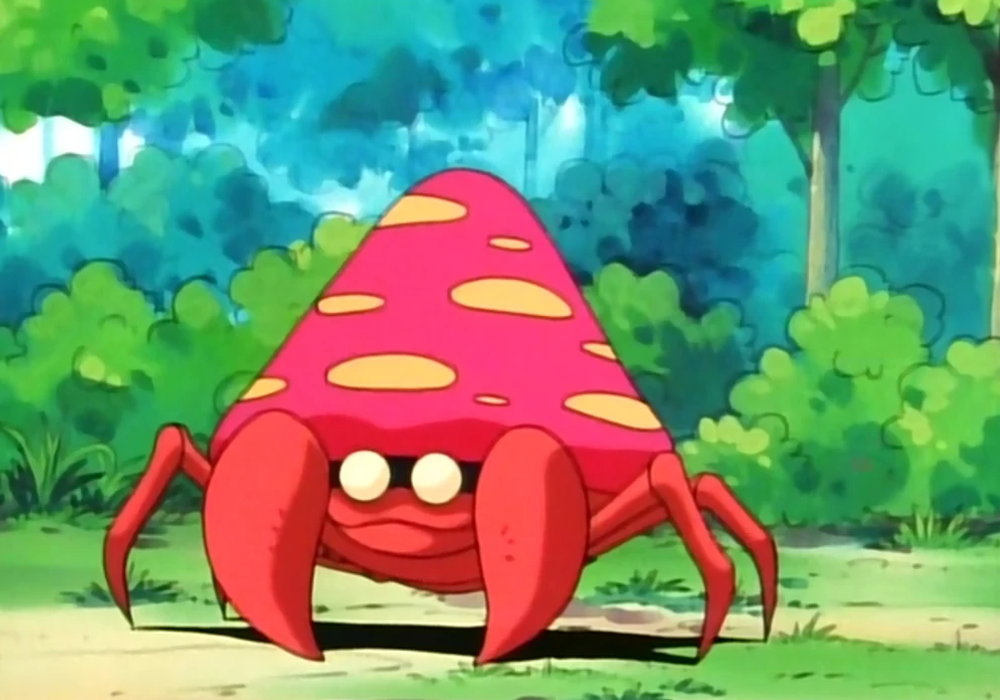 The parasitic mushroom continues on in Paras’s evolution, Parasect.

This time, the fully-grown tochukaso has completely controlled and overtaken the Pokemon. Parasect now only lives to serve the mushroom, and if you remove the tochukaso, Parasect will stop moving.

Although it’s a terrifying concept, it is still quite interesting. Thus, Parasect gets our 10th spot. 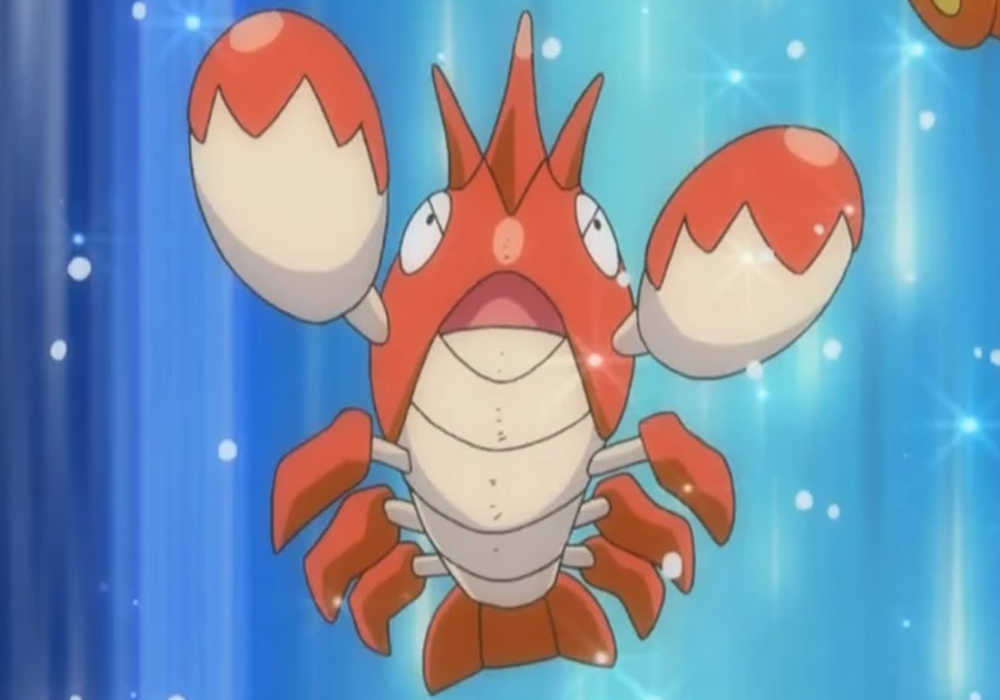 The Pokemon series really loves its odd and unique crabs. Adding to the list is Corphish, a crayfish and crab combo Pokemon.

Corphish is known to inhabit polluted waters and thrive in them. It’s not picky with where it lives and what it eats! With its two huge pincers, it grips prey and opponents alike.

Due to the adversities, its species have faced, it has high Attack, followed by Defense, 80 and 65, respectively. Corphish is a crab you don’t wanna trifle with. 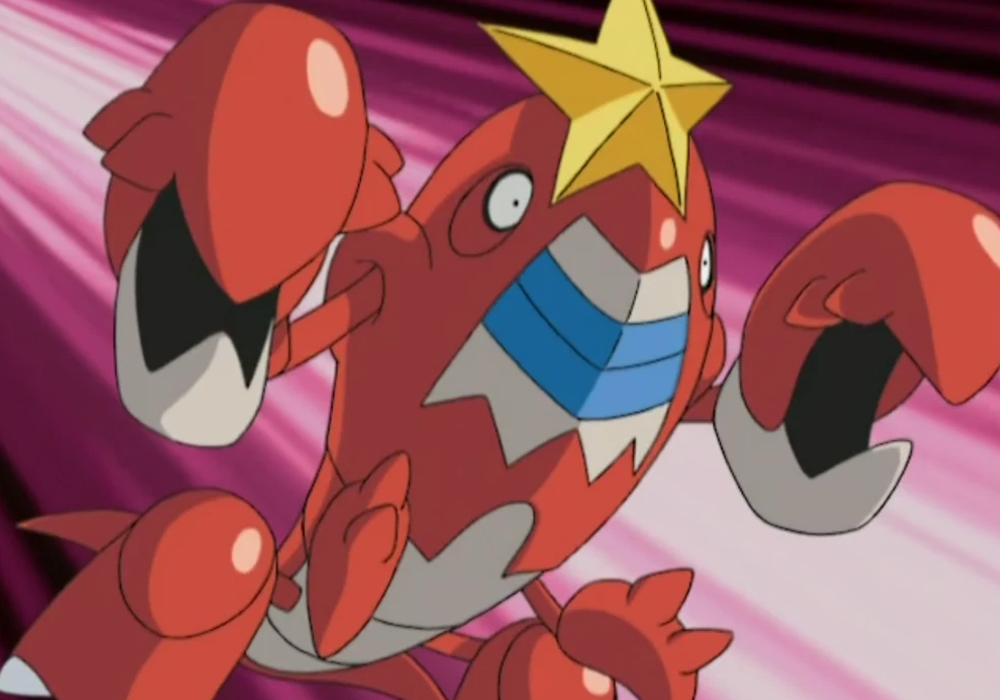 If Corphish is hardy already, then you don’t wanna mess with Crawdaunt!

Crawdaunt is the evolution of Corphish. All of its difficult experiences have molded it into an aggressive, territorial, combat-trigger crab Pokemon.

Its shell is full of scars from fighting. It will challenge anyone, Pokemon and trainers alike, to a brawl! Even a vicious swarm of Basculin can’t intimidate Crawdaunt.

With all the fighting and gung-ho attitude, no wonder its highest stat is Attack, with Special Attack and Defense following behind. Crawdaunt is truly daunting! 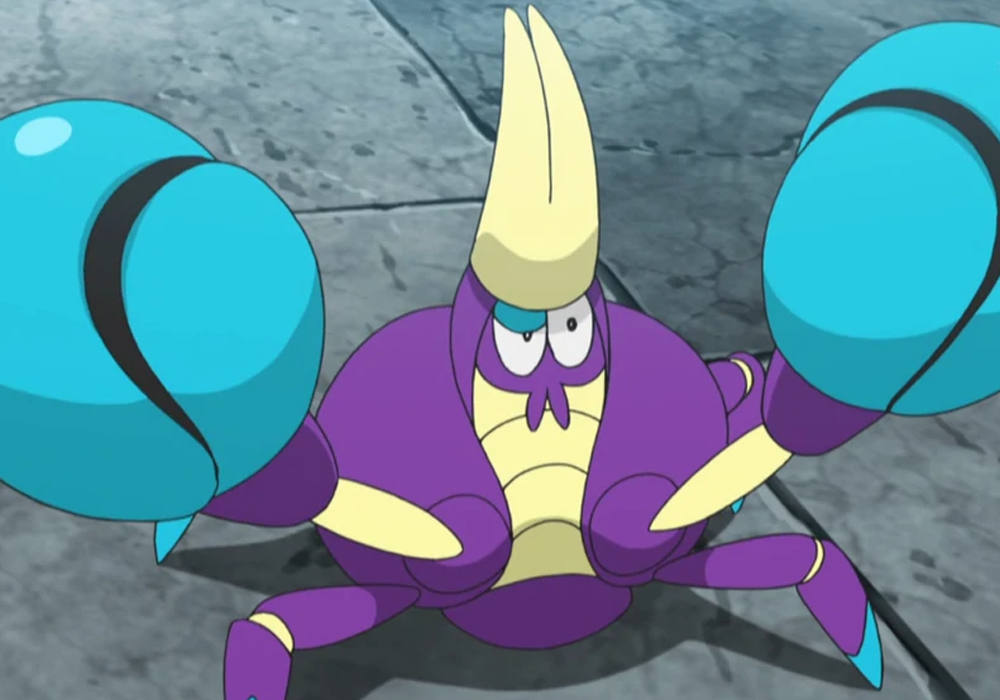 We’ve got more fighting crabs in our list. This time it’s the crab that loves to brawl – Crabrawler!

Crabrawler’s design definitely shows how much it loves fighting. From its pincers that look like boxing gloves to its “black eye”, it looks like a formidable fighter!

It seems to be based on coconut crabs, which like to live in coastal areas. Crabrawler’s Alolan home is quite befitting!

Like the other fierce crabs in our list, Crabrawler’s highest stat is also Attack. However, its second stat is Speed, making it a crab that hits hard and fast. 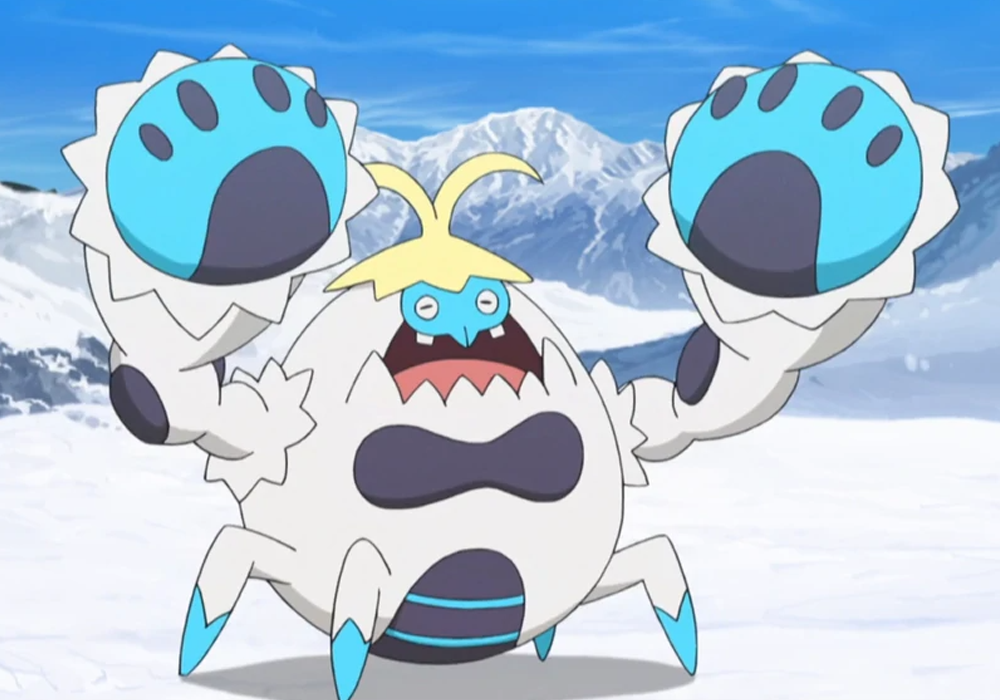 Up next is Crabominable, and he’s definitely not as abominable as you think!

After climbing up Mount Lanakila, the cold temperature forced Crabrawler to evolve and adapt into a crab with white fur. Thus, Crabominable came into existence.

Like the abominable snowman, Crabominable has thick white fur all over its body, with its blue shell peeking out. Its claws have also developed into excellent ice-smashing tools for ice walls and avalanches. 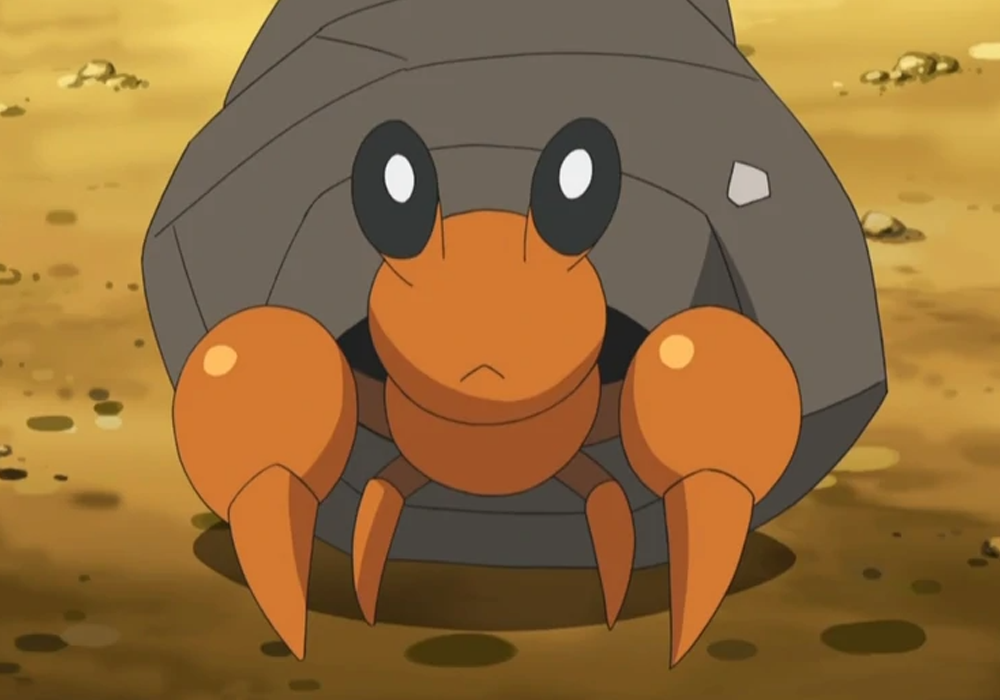 Scuttering with its tiny legs, we have Dwebble up next.

Like hermit crabs that have hollow shells as their home, Dwebble chooses a tiny rock as its mobile home.

It uses its corrosive spit to help make a hole into a rock. This very same spit can fix cracks on it, too.

When it loses its rock home, it won’t calm down until it finds a replacement. Being vulnerable like that would make anyone anxious, especially if a bulk of your Defense stat comes from your rock! 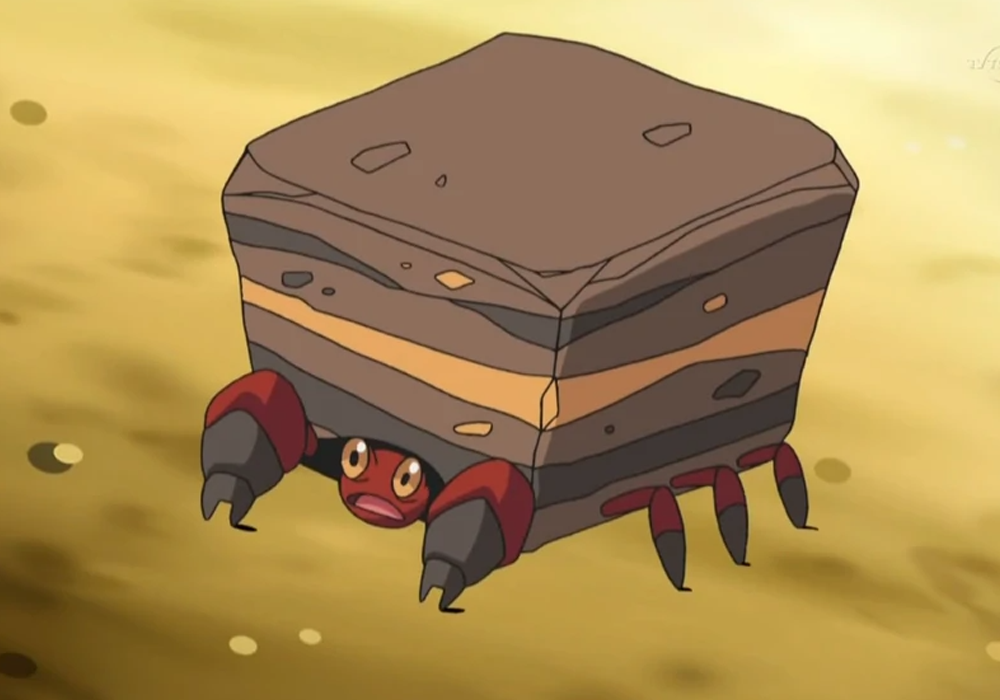 The pebble grows into a crust – Dwebble evolves into a Crustle!

All the rock carrying has made Dwebble into a very strong Crustle. It can carry heavy boulders for long periods of time, and its claws can break even a Rhyperior’s carapace.

Because it treasures its home a lot, Crustle has become very territorial. It will even fight fellow Crustles for territory. The one which gets its strata shell broken loses.

As expected, its highest stat is Defense, with Attack a close second. Crustle is a crab that can take hits and hit back as hard! 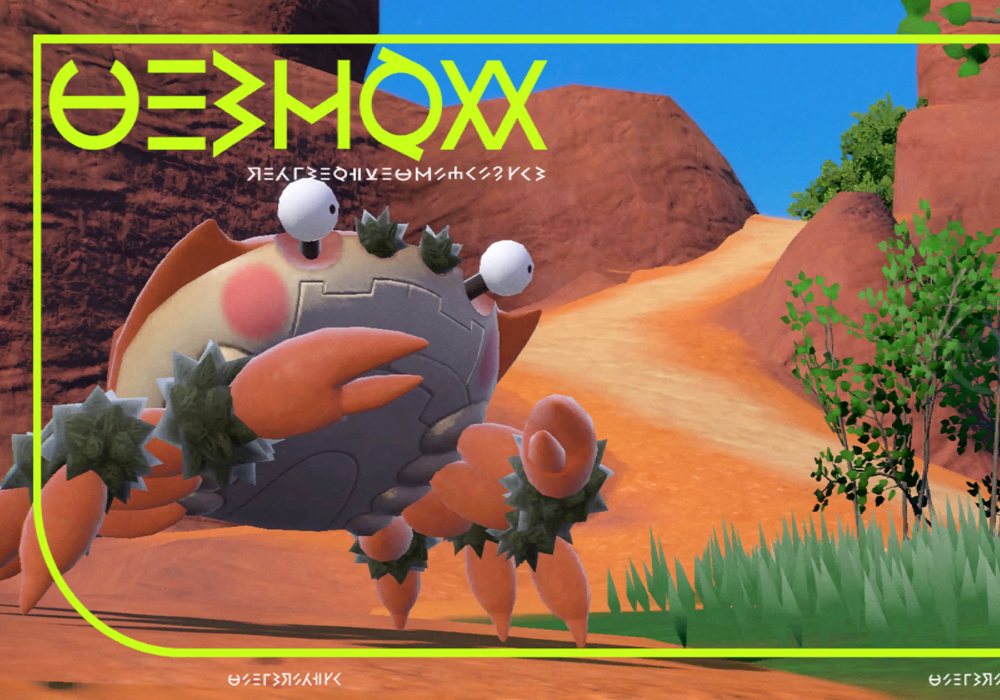 Fresh from Pokemon Scarlet and Violet, we have newcomer Klawf on our list!

Like Dwebble and Crustle, Klawf is a rock-dwelling crab Pokemon. It’s known to hang upside down from rock walls and cliffs to attack unsuspicious prey and enemies.

Unfortunately, it can’t hang that way too long, or it gets dizzy. Silly, Klawf.

Stats-wise, Klawf has very high Defense. Its Attack is not bad, either. They’re at 115 and 100, respectively.

The downside to Klawf is its many weaknesses, all having a x2 multiplier. You gotta learn how to mitigate that if you want to use this silly hairy crab. 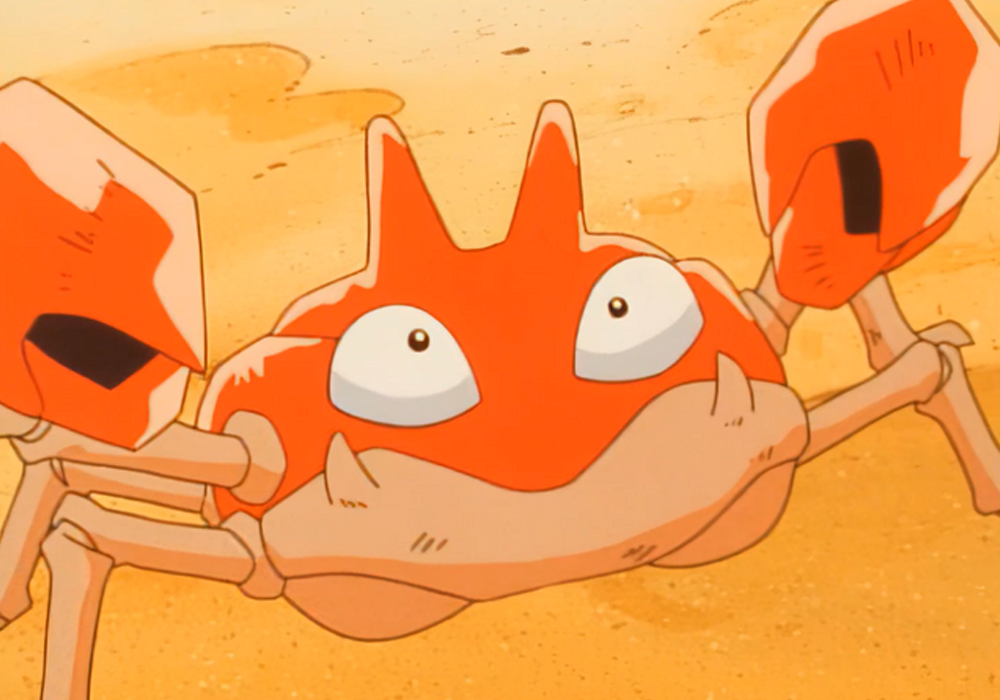 When it comes to crab Pokemon, you can’t get crabbier than Krabby!

Krabby is one of the OG crab Pokemon from Gen 1. A lot of us can fondly remember how Ash used a Krabby in one of his momentous fights!

According to the Pokedex, Krabby lives near sandy beaches and shores. It burrows underground to make it its home.

When fighting other Krabby or Pokemon, it can damage its pincers. Sometimes, it can even break off! But the good thing is it can easily grow back.

Attack is also Krabby’s highest stat, followed by Defense. No wonder it uses its pincers a lot for fighting and defending itself! 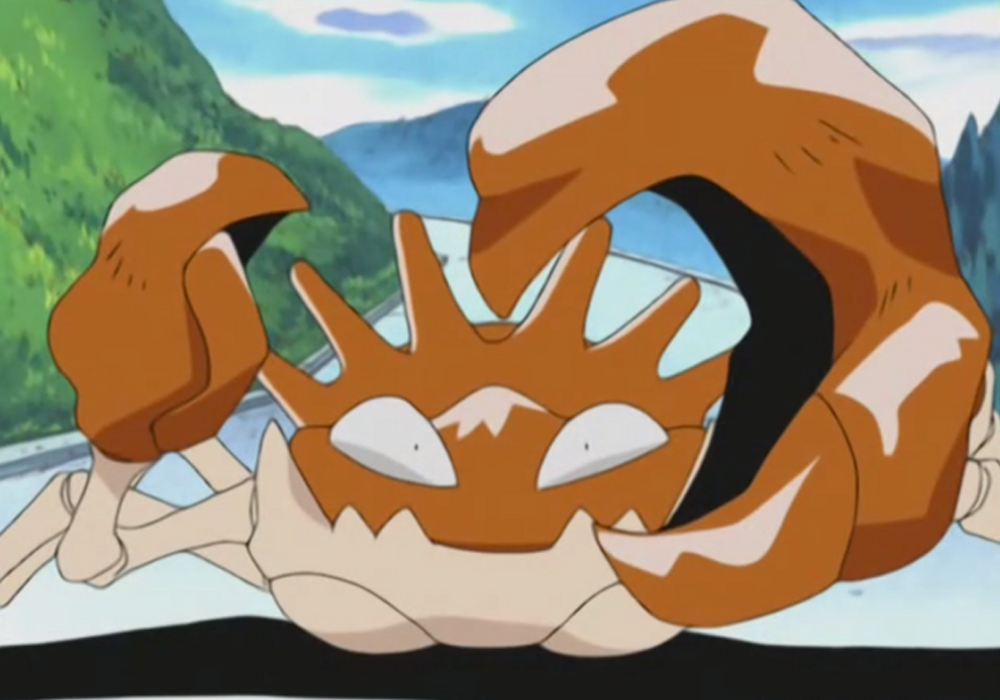 If Krabby is memorable, who could forget its evolution, the mighty Kingler!

Just like Krabby, Kingler is an OG Gen 1 crab Pokemon. In the middle of Ash’s battle, his Krabby evolved into a Kingler and continued to sweep its opponents.

It seems to be based on a multitude of awesome real-life crabs, one of which is a king crab.

If that’s not awesome enough, it can also Gigantamax and take on a huge, spider-crab-like form!

High Attack at 130, high Defense at 115, and a Gigantamax form to boot? We’ve got an excellent crab right here.

Enjoy your kingly throne at our number one spot, Kingler.