Oil is an important resource in Conan Exiles. Not necessarily in the beginning, but as you progress, you’ll start needing oil in fairly large quantities consistently. So let’s take a look at all there is to know about oil in Conan Exiles.

What is Oil Used for in Conan Exiles?

In Conan Exiles, oil is used in cooking, applying to equipment for boosts and benefits, and as fuel for several different items such as furnaces. As mentioned, oil isn’t too essential when you first start playing, but it slowly becomes an integral part of the game.

As for its use as fuel, oil is by far the most efficient fuel in Conan Exiles. While it has the same burn time as dry wood, it is more time-consuming to make dry wood, so oil is the best choice when it comes to fuel. 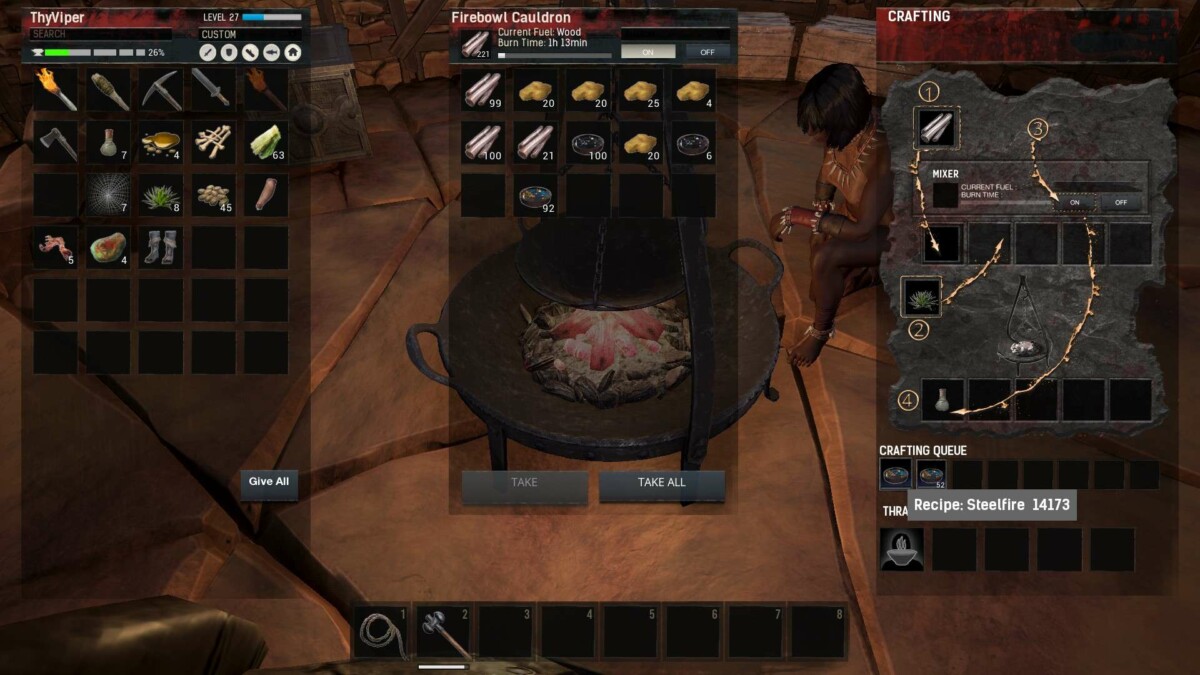 How Do You Get Oil in Conan Exiles?

There’s more than one way for you to get oil in Conan Exiles. Your preferred method may change as you progress through the game. From fishing and pressing seeds to using an alchemist’s bench, let’s take a look at a couple of different methods.

How Do You Get Oil From Seeds? (Lowish Level Players)

Seeds are plentiful in Conan Exiles, provided that you are in the right biome of course! You can gather seeds using your bare hands, but you’ll get more if you use a sickle, as it will allow you to farm more seeds.

Keep in mind that the more seeds you have, the better. Once you have enough seeds, take them to your fluid press. Putting 15 seeds into a fluid press will give you one oil, so it’s not the best, but it is one of the easiest methods for lower levels.

How Do You Get Oil From Fish? (Mid-level Players)

This one’s a step up from seeds, but it is by no means the most efficient method. However, it isn’t particularly time-consuming once you are all set up, so that’s a big plus.

For this one, you’ll need to craft some fish traps. These are pretty easy to make, they only require 10 twine and 10 shaped wood. You’ll also need bugs, you’ll get insects as you harvest seeds. Place the insects in the traps and then go and do some fishing.

Bugs aren’t the most efficient thing to use as bait, but they’ll do the trick. If you want something a little more efficient, consider building a compost heap, as it will produce grubs that catch better fish.

Getting Oil From Bark and Ichor (High-level Players)

You’ll notice that the higher your level, the more inefficient fish and seeds are for producing enough oil for your needs. That’s where this method comes in. You need to find a T3 or T4 alchemist thrall and break it in order to station it at your alchemist’s bench.

By doing this, you’ll be able to learn the recipe for turning bark and ichor into oil. Once you’ve unlocked this recipe, then it’s just a case of getting as much bark and ichor as possible and turning it into oil via the alchemist’s bench.

Getting bark is very easy, simply use a pickaxe on dead logs and dead trees. It is a bit boring, but bark is always handy as it is used for more than just creating oil, as I’m sure you already know.

Ichor, on the other hand, requires a little more violence in order to harvest. You can get ichor by killing and harvesting the corpses of venomous animals, the fastest way to gather this resource is by farming spiders.

You’ll find plenty of spiders at the back of Skittering Cave. Once you have plenty of ichor, head on back and turn them into oil via an alchemist’s bench. 1 bark and 1 ichor will give you an impressive 5 oil. So, using this method will allow you to become an oil baron in no time!