Like its predecessors, Borderlands 3 offers players a choice of four characters to play as. And like its predecessors, all of these characters have their own distinct strengths, weaknesses, and abilities, all offering very diverse gaming experiences. All of them are great fun to play, and ultimately, none of them is a bad choice; it’s entirely a matter of what kind of playstyle you’re most comfortable with, and what sort of game you want overall.

Below, we’ll go over each of Borderlands 3‘s characters and discuss which ones are best for which players. We’ll also briefly discuss their skill trees – as is ever the case in Borderlands games. The player characters have very distinctive skills. 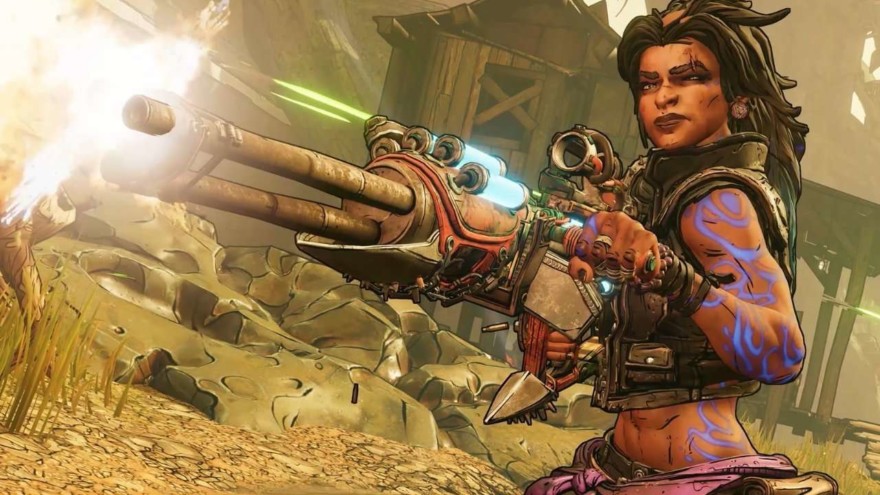 Many newcomers to the Borderlands games assume that the Siren characters are the game’s rough equivalent to mages – equipped with flashy abilities, but fragile in head-to-head combat. And while that may be true in some cases, it’s very much not the case with Amara, who is essentially this game’s answer to the first game’s Brick or the second game’s Krieg.

Amara is the character you call up when you need to clear out sizable swathes of enemies. Chiefly an offensive character, she’s at her strongest when she’s getting up close and personal with enemies. Her powers are all very much centered on aggressively taking facing enemy hordes head-on and raining elemental damage down on them.

Her Phasecast (which starts out her Fist of the Elements skill tree, which centers on elemental damage) sends an Astral Projection of herself surging forward, dealing damage to everything in its way, which can be devastating when she’s faced with a closely-clustered group of enemies.

Similarly, her Phaseslam, which starts out her melee-centric Brawl tree,sends her leaping up and slamming down into the ground, dealing a wave of damage to any enemies surrounding her – a game-changer should she or her party find themselves surrounded.

Her Phasegrasp, meanwhile, the starting skill of her more general Mystical Assault tree, holds an enemy in place while she and her allies rain damage down on them – a brutal approach that can make a decisive difference when dealing with hardier foes. 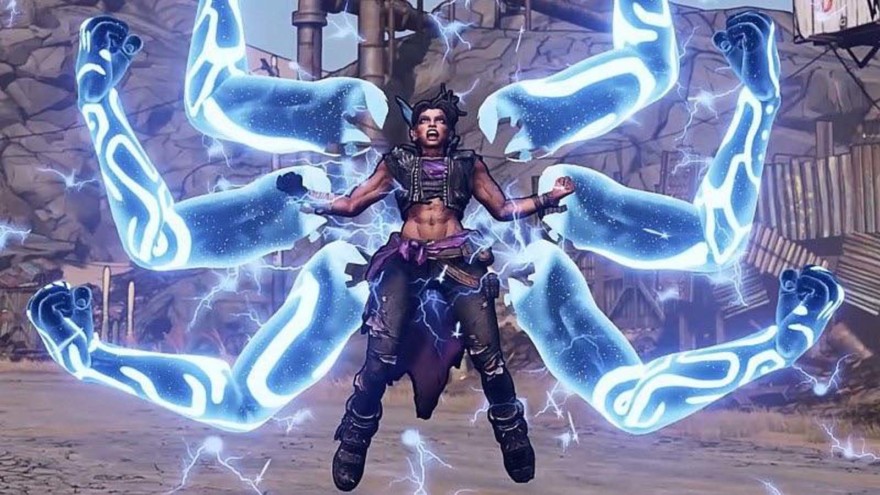 You might notice that all these abilities very much center on ensuring that Amara can get as close to her enemies as quickly as possible and deal damage to as many of them as she can in the shortest amount of time.

In other words, she’s the character for players who don’t mind getting themselves directly into the center of the action rather than taking on foes from a distance. She’s for those who prefer the close-ranged brutality of melee combat (while she can use weapons, she’s best off with shotguns and other close-range stuff), and who, crucially, are willing to be attentive and spatially aware in a fight.

Playing as Amara, you’ll frequently find yourself surrounded on all sides; and even if you’ve got a good set of teammates covering you from a distance, you’ll need to be tremendously aware of the battlefield and know where the greatest danger is coming from and whether you can take it on – especially when you’re faced with enemies who aren’t as sensitive to her largely elemental-based damage.

Bottom Line
Amara might be considered the most challenging of the character options; but once you get the hang of her particularly frenetic variety of fighting, she can also be seriously addicted to playing. After all, is there any rush greater than being in the very center of a brawl, tearing down your enemies as they bear down on you from all sides? 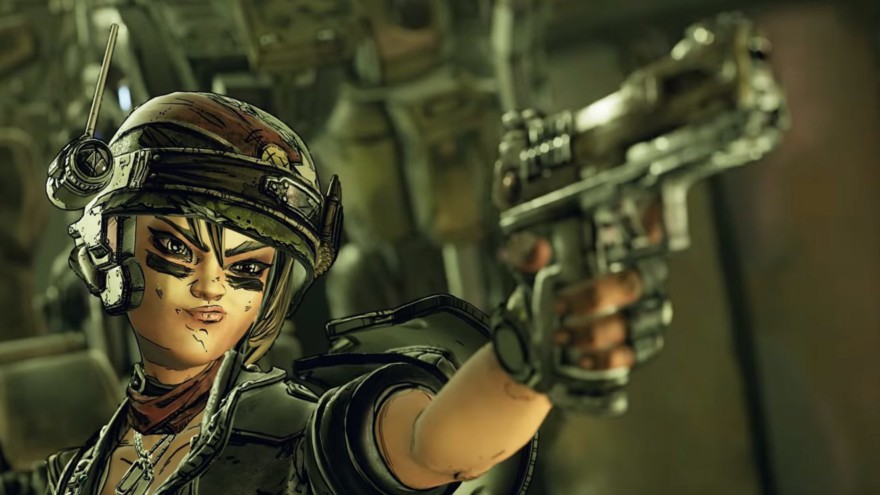 While Amara might be considered a challenging character best suited to more experienced players, Moze is ideal for newcomers to the Borderlands series.

As her title suggests, as long as new players have a general understanding of the concept of first-person shooters, they’ll have the easiest time adapting to Moze’s playstyle – especially if they’ve got the right teammates to compliment her abilities.

Moze’s main feature is the Iron Bear, a powerful mech that she can summon and control, and her skill tree, rather than centering on her own abilities, instead centers on weapons that she can access for the Iron Bear.

Any skill path you take for the Bear will make it efficient for tearing through entire rooms full of enemies in moments; it’s just a question of how you want to do it. Fancy delivering a rain of constant, steady fire?

Equip the Minigun, the starter weapon of her Bottomless Mags skill tree, which offers up a succession of weaponry centered on minimizing reload time and equipping the Bear with an arsenal that can deliver a consistent, steady rain of damage that’ll ensure enemies are always under fire.

Prefer to deliver attacks that are a bit more short, sharp, and explosive? Equip the V-35 Grenade Launcher, which, unsurprisingly, begins the Demolition Woman skill tree, which is all about fiery, explosive attacks that have a wider area of effect and can damage wider swathes of enemies at once.

Or are you more interested in ensuring that the Bear becomes a tank, holding together against waves of enemy fire and drawing damage away from your teammates? In that case, you’ll want to equip the Railgun, which begins the Shield of Retribution skill tree, centered on features that priorities the health and durability of the Iron Bear, making it into more of a wall.

All of these are extremely effective options, and whichever one you choose, the Iron Bear can represent a very valuable tank and damage sponge for the party. 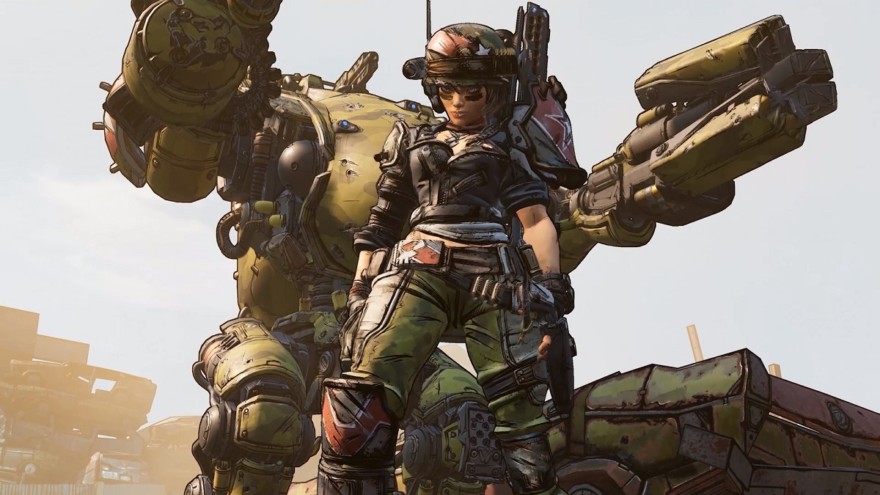 It’s worth noting that more veteran Borderlands players might find Moze slightly more repetitive than other options since her playstyle is very much the most basic run-and-gun variety compared to the more elaborate or strategic styles of other characters throughout the series. But as mentioned,

Bottom Line
For newcomers seeking an accessible introduction to the world of Borderlands, or simply those who find enjoyment in the more basic forms of 90s-style, run-around-and-gun-things-down FPS gameplay, Moze can make for an ideal option. 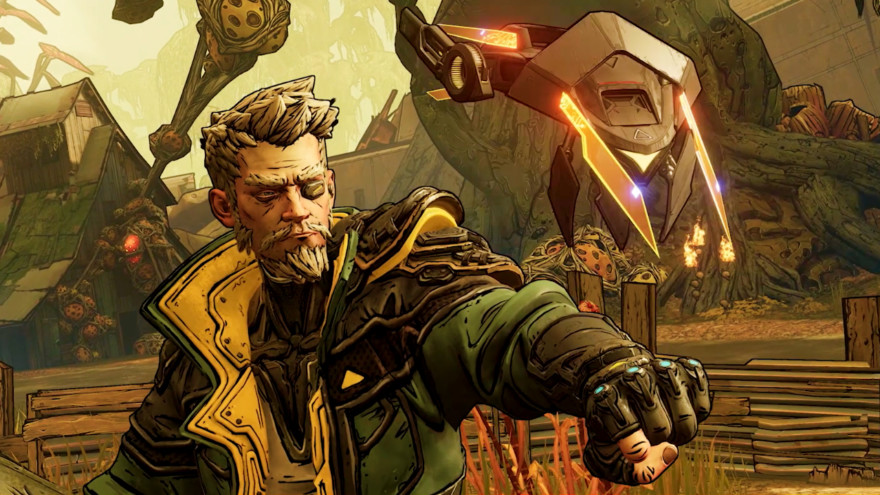 A character all about support and strategy, Zane is a character ideal for players who prefer the kind of character who’s good at avoiding damage, rather than withstanding it. Zane is also unique in that he can equip 2 Action Skills at the expense of being able to throw grenades. A good trade off!

Zane’s most iconic ability is his Digi-Clone, which, when spawned, stands stationary and fires on enemies. This clone is hardly a one-trick pony, either. It can be equipped with a great selection of abilities – including throwing grenades, exploding, and converting its damage into shields for Zane – which, used strategically, can turn it and Zane into a true two-man army.

And of course, when strategy calls for it, Zane can also spontaneously swap places with his clone, potentially serving as an instant escape from a tight spot. This rather represents Zane’s core strengths and playstyle: he’s the sort of character who can dip into battle, land some seriously hefty blows, and then duck out again before enemies have a chance to return fire.

It’s an approach that requires careful timing and planning to pull off, but which can be devastating when done right. Of course, the Digi-Clone, which is the starting skill of Zane’s Doubled Agent skill tree, just represents one approach players can take with him. 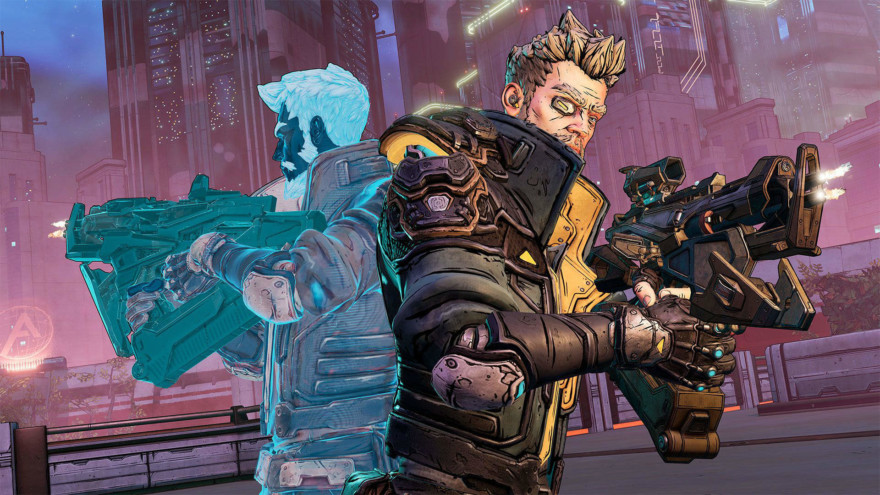 His other two options are the Barrier, which spawns a transportable shield that deflects damage (this begins the Under Cover skill tree, which centers on improving the character’s defenses), and the SNTNL, which spawns an automated drone that’ll fly overhead and pepper enemies with machine-gun fire. This starts the Hitman skill tree, which centers on weakening enemies steadily.

But you’ll notice that the recurring theme is to avoid damage rather than Bear through it and to do damage from a distance rather than head-on.

Bottom Line
Zane’s playstyle is definitely among the most fast-paced and arguably the one that’ll involve them most movement, but if you’ve got a head for chucking grenades and moving very fast, then Zane could represent one seriously fast-paced romp across Pandora. 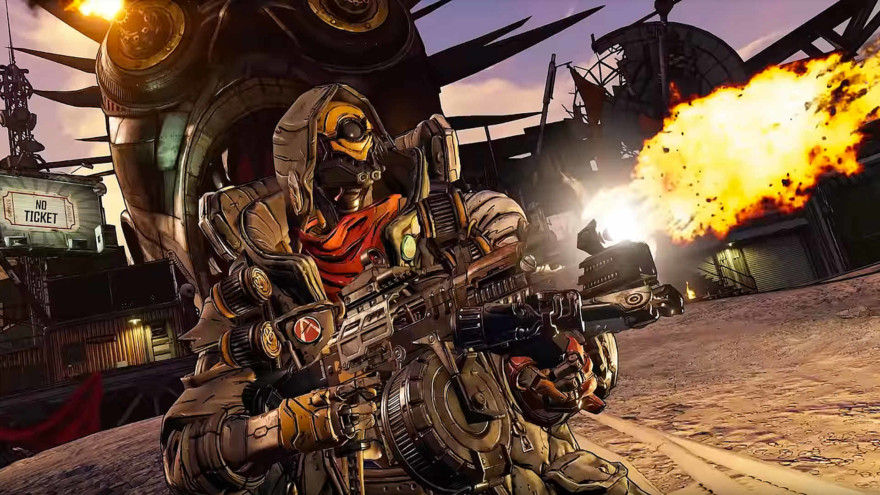 If you like the idea of the backup offered by Zane’s Digi-Clone but would prefer it to be a bit more permanent, then FL4K might be your best option – as their class name implies, this character is given control over an animal companion throughout the game. Indeed, while all four of these characters can be played both solo and in teams if used properly, FL4K might be called the most solo-friendly option, since they essentially come with an entire, fully customizable backup character.

Each of FL4K’s skill trees is centered on the three beast companions he can choose between, with each one centering on building up his skills in such a way that complements that particular companion.

The Master skill tree, centered on the pet skag (a hardy and bloodthirsty canid creature), is focused almost entirely on bolstering the strengths of the skag, thus making FL4K (and thus the player) more of a passive commander directing the action than a traditional FPS protagonist directly on the front lines.

The Stalker skill tree, centered on the pet jabber (a fast-moving simian creature with the ability to throw objects), centers on avoiding damage and landing blows in bursts. The Stalker skills center on allowing FL4K to go invisible, heal, land critical blows, and otherwise attack strategically and from a distance – an approach which makes the player feel very much in sync with their pet jabber, an agile creature with the ability to attack enemies from a distance. 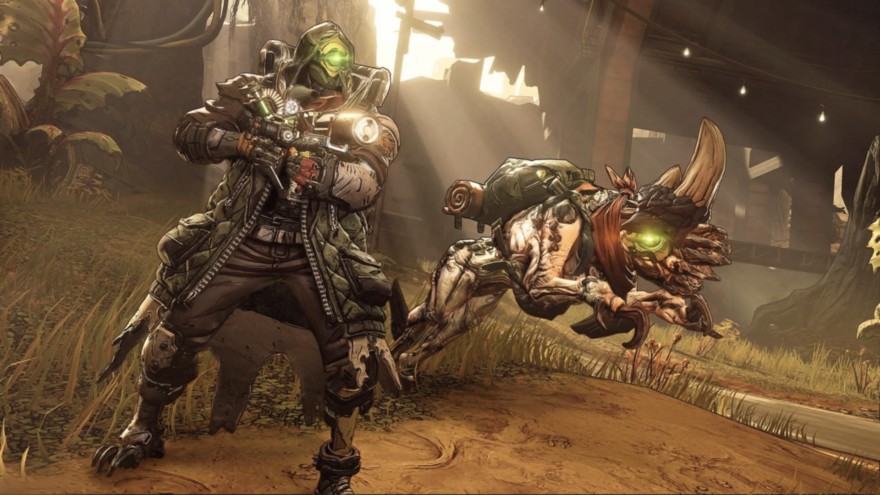 Under this skill tree, FL4K’s survival is very much dependent on them making careful use of the varied menagerie of beasts they control. Utilizing each one at strategic times, and playing their strengths off each other – all while very much feeling like they’re directly part of the action, especially when aiming and launching their rakk attacks.

The theme here is pretty clear: no matter which skill tree you opt for, FL4K is a character that, though by no means weak, boasts skills that are very much dependent on the assistance of your pet to be truly effective. Even if you’re playing a solo game, controlling FL4K can never be a one-person operation; they must work in tandem with their companion if they’re to survive Pandora.

That’s not to say that playing as FL4K is excessively dependent on strategy at the expense of action or enjoyability; but rather that, whether or not you’re playing a co-op game, FL4K is the character that most strongly gives you the feeling of controlling a group, rather than an individual.

And of course, while FL4K is undeniably strong as a solo character, there’s also a lot to be said for playing them in a co-op game. Carefully choosing the right pet can make a great complement to a team.

For instance, the close-combat-happy skag could be a great asset to a team with an excess number of ranged fighters, while jabber could be very useful to provide covering fire when a greater part of your team prefers close-quarters combat.

Bottom Line
Once they’ve fought alongside your pet for long enough, the chances are that your friends will bond with them almost as much as you have.

There may only be four characters to choose from here, but, as we’ve hopefully made quite clear here, they offer such drastically different playstyles that each one can make Borderlands 3 feel like a completely different sort of game.

Which one you start out with, and which one will prove your favorite, is very much up to what you’re looking for in the game; but we can assure you that each character offers his or her own distinct thrills, and that chances are you’ll be giving every one of them a try at some point.