If you fancy yourself a conjurer of creatures from the planes of oblivion or just want to create cool weapons, conjuration spells are just for you. With the Twin Souls perk you can have two conjured creatures. Coupled with a follower, this makes you one hell of a formidable force. Here are the best conjuration spells in Skyrim.

This nifty spell will conjure up the ethereal version of the Daedric Sword. It has a base damage of 9 and costs 93 magicka to cast. Not bad for a novice level conjuration spell! The spell lasts for 120 seconds but it will dispel you sheath the sword.

You can get this spell from any of the court wizards for 49 gold but it is pretty common to find it on enemy mages and in chests.

Another novice spell which will summon an ethereal wolf to fight for you for 60 seconds. The familiar will appear wherever you cast the spell. The spell costs 107 magicka to cast. You can purchase this spell for 49 gold from any of the court wizards.

If your race in Skyrim is a Breton you will start with this spell.

The first of our apprentice-level conjuration spells, the Flame Atronach costs 150 magicka to cast and it has a health of 200. As you might expect it is resistant to fire such as Fireball. The spell lasts for 60 seconds and if it is killed before then it will explode causing fire damage to anyone caught in the radius which includes you too.

This spell tome costs 99 gold and can be purchased from any of the court wizards.

Soul trap is a useful spell for two reasons. In case you aren’t familiar, Soul Trap, traps souls in a soul gem. A soul gem can then be used to enchant weapons and armor at a arcane enchanter or recharging already enchanted weapons. This is particularly helpful if you need a black soul gem to cure yourself of vampirism.

To use soul trap you must have an empty soul gem of sufficient size. You cast soul trap on your target and then killed it before the spell effect runs out. You’ll get a confirmation message on screen if you’ve been successful.

Soul Trap costs 100 magicka to cast and can be purchased from court wizards for 100 gold.

This spell is only available if you have the Dawnguard DLC and is obtained as a reward for finding Arvak’s Skull in the Soul Cairn. This spell costs 136 magicka to cast and will summon the undead horse Arvak. It will last for 60 seconds but if you ride him and stay on it will stay indefinitely.

You can get this spell from most court wizards for 335 gold. You can also find this hidden under a lantern in the north-west corner of Fort Amol (northeast of Ivarstead).

The Frost Atronach is a step up from the Flame Atronach as an adept-level spell. It costs 214 magicka to cast and lasts for 120 seconds. It will have a health of 667 and if it dies before the end of the 120 seconds it explodes causing frost damage.

You can get the spell tome fromPhinis Gestor in the College of Winterhold for 347 gold. You’ll need a conjuration level of 40. 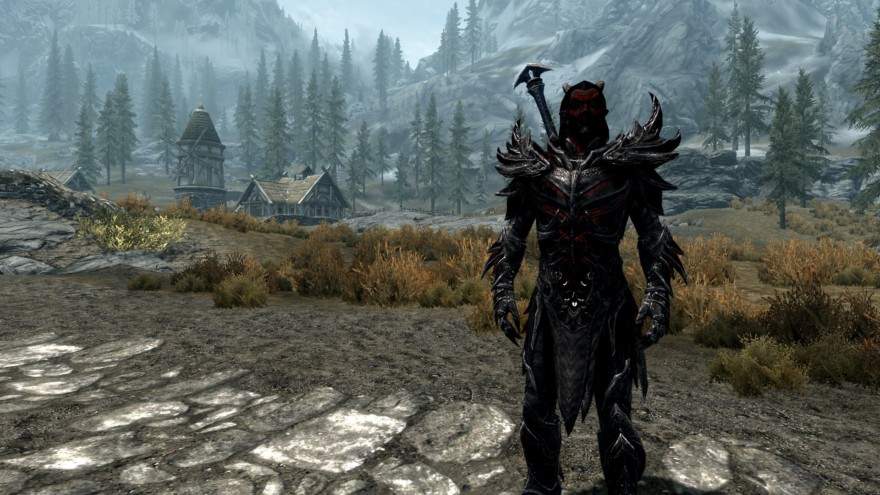 The Dremora Lord is probably one of the coolest things you can conjure in Skyrim and it’s a pretty valuable sidekick in fights. This is an expert-level spell and costs 358 magicka to cast. The Dremora Lord will have health of 345 and be armed with heavy armor and a Daedric greatsword. It’s a match for a Draugr Deathlord.

The spell tome costs 1900 gold and can be purchased from Phinis Gestor at the College of Winterhold. Your conjuration skill must be at least 65.

Similar to Flame and Frost, the Storm Atronach is a more powerful expert-level spell. The spell lasts for 120 seconds and costs 322 magicka to cast. If it is killed before the 120 seconds is up it will explode with storm damage.

Storm Atronachs use Lightning Bolt and Chain Lightning and have 241 Health, 197 Magicka, and 147 Stamina.

You can get spell tome from Phinis Gestor at the College of Winterhold for 1900 gold if you have a Conjuration skill of 65 or more.

This expert-level spell can be purchased from Phinis Gestor at the College of Winterhold for 630. The spell costs 302 magicka to cast and reanimates a powerful dead body for 60 seconds. After that it will turn to blue dust.

This is an expert-level spell that can banish conjurations. It has a 20% success rate and costs 215 magicka to cast. If the spell does not work then the conjuration will take 40 damage and be staggered. You need to hit level 70 in conjuration to purchase this from Phinis Gestor at the College of Winterhold for 620 gold.

Like the Dread Zombie spell, this master-level spell reanimated a dead body permanently who will fight and protect you as long as they aren’t banished or killed. If these thralls die they won’t turn to blue dust but you will be able to reanimate them again. The spell costs 618 magicka to cast.

Some of the best thralls who are great in combat are:

You will need to complete the Conjuration Ritual Spell to be able to purchase the spell from Phinis Gestor for 1270 gold. 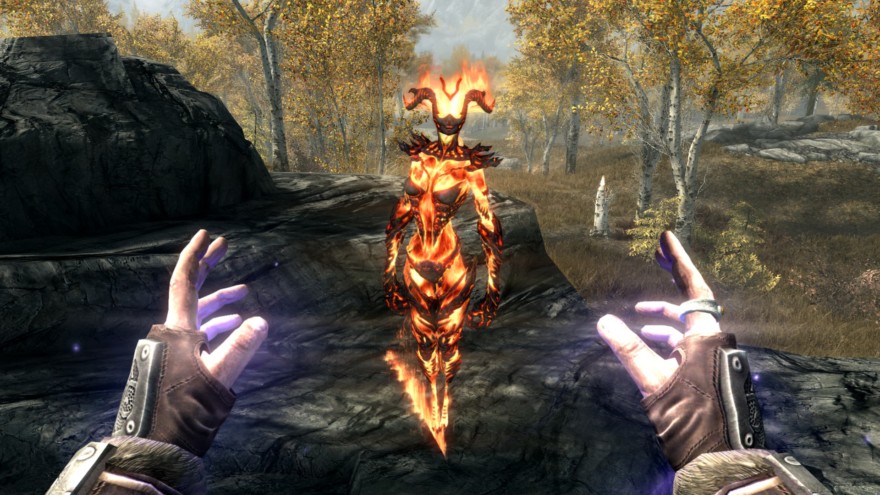 For the ultimate fiery sidekick, the master-lever Flame Thrall comes with 242 health and use Firebolt and Flames. It will cost 556 magicka to cast and this thrall is permanent unless it dies.

You will need to complete the Conjuration Ritual Spell to be able to purchase the spell from Phinis Gestor for 1260 gold.

A step up from the Flame Thrall, the Frost Thrall has 440 health and attacks using Frost Cloak that causes 10 points of frost damage and stamina damage to those in melee range. The spell costs 679 magicka to cast.

You will need to complete the Conjuration Ritual Spell to be able to purchase the spell from Phinis Gestor for 1300 gold.

The best of thralls, the Storm Thrall costs 741 magicka to cast and attacks using Storm Cloak, Lightning Bolt, and Chain Lightning. It has a little less health at 391 but way more magicka (197) and stamina 247).

You will need to complete the Conjuration Ritual Spell to be able to purchase the spell from Phinis Gestor for 1350 gold.

The Conjuration Ritual Spell can be started once you hit level 90 in this skill. You’ll need to speak to Phinis Gestor to start this quest. The easiest way to find him is in bed between midnight and 7 am on the ground floor of the Hall of Countenance. From noon onwards you can find him in the Arcanaeum. 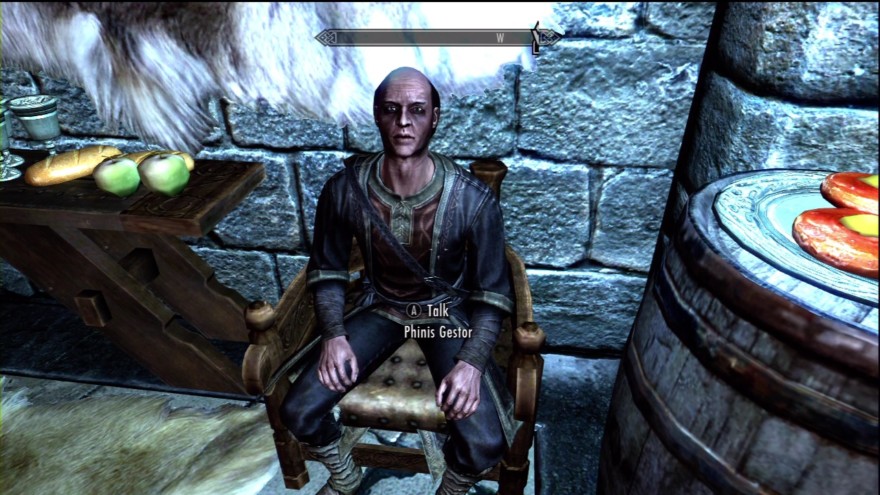 After some dialogue he will teach you the Summon Unbound Dremora spell and you then have to go to the roof of the Hall of Attainment and use the spell.

Of course, nothing in Skyrim is that easy as you then have to defeat this Dremora, twice. The best way to beat it is by using shock damage or by using a follower to distract it and pick it off from a distance.  You’ll be given a Sigil Stone as a reward for making it submit which you give to Gestor. He will reward you with the Flame Thrall tome and you can then purchase the other 3 master conjuration tomes.

You may also be interested in our other Skyrim spell guides:

Is conjuration good in Skyrim?

Conjuration magic is good in Skyrim as it pairs nicely with pretty much every playstyle except for stealth. With it, you can conjure weapons and powerful thralls to fight alongside you and your follower.

What is the fastest way to increase conjuration in Skyrim?

The fastest way to level conjuration is to pick a fight with something easy to avoid like a Slaughterfish. Stay nearby and keep conjuring a bound weapon again and again to power level quickly.

What is the strongest conjuration spell in Skyrim?

While the Storm Thrall might seem the most powerful on paper, Dead Thrall has it beat. Provided you reanimate a strong fallen foe such as Ancano, Kornalus, Orchendor, Sebastian Lort, Sild the Warlock, or Silus Vesuius, the thrall will be better than a Storm, Flame or Frost Thrall.

Are Thralls stronger than Atronachs?

Thralls are stronger than Atronachs as they usually have more health, stamina, and magicka, and Atronachs will last for a limited time, whereas a Thrall will exist permanently until it is killed or banished.