Illusion is one of the 5 types of magic that you can cast in Skyrim. Illusion magic can affect other creatures and NPCs or be cast on yourself. As with all magic in Skyrim, casting an illusion spell will cost magicka.

Illusion magic is usually cast by players who want to play the game in a stealthy manner as the spells usually either buy you time or help you to avoid conflict. Here are the best illusion spells in Skyrim.

This is a relatively easy spell to obtain as it is normally found in chests right from the start of the game but can also be purchased from the trader in Riverwood or any court wizard or general merchant. This spell creates a line of blue light that directs you to your current objective.

It’s useful at the start of the game when you are finding your feet. The spell costs 25 magicka per second to cast. If you have multiple quests active at the same time this spell will show you the nearest one.

Courage costs 39 magicka to cast and there’s no prizes for guessing what it does. This spell can be cast and directed at a single target and stops them from fleeing in fear for 60 seconds and also gives them an extra 25 points of health and stamina. This is useful for quests where you must keep someone alive or protect them.

A fun spell to throw out in the early game, Fury will cause foes up to level 6 to attack anything nearby (including each other) for 30 seconds. The spell costs 67 magicka to cast and is particularly useful in public or busy places. The best use of this spell is when you cast it from hiding and continue to stay hidden.

You can clear out whole forts in this way as they go round taking their fury out on each other. If you cast this spell on non-hostile targets and are seen, it counts as assault and will be reported to the guards.

You get this spells from court wizards.

Moving into apprentice-level magic (level 25) this spell is also an obvious one. This spell only works on characters and creatures up to level 9 and will pacify them for 30 seconds. The spell costs 146 magicka.

This is a great spell for giving yourself some breathing space if you get stuck in the middle of a fight allowing you to heal yourself or getaway.

Another apprentice skills that affects characters and creatures up to level 9 and lasts for 30 seconds. The difference here is that everyone caught with the spell will flee in panic which is quite funny to witness. This has a slightly higher magicka cost compared to Calm at 153.

Even when you’re invisible your feet will still make a sound and that’s where Muffle makes you completely lethal and undetectable when used with invisibility.

Muffle costs 144 magicka to cast and makes you move silently for 180 seconds. That’s more than enough time to handle your business.

Muffle is one of the easiest ways to level up your characters in the early game and a quick way to get to Level 100 in Illusion magic. Provided you have the magicka (and the patience) you can keep casting this spell over and over again to gain experience. You’ll hit Level 100 in no time.

Muffle can be purchased from court wizards.

Moving on to adept level skills (Level 50), Frenzy is the upgrade to Fury where anyone caught in the radius of the casting will begin to attack each other. This spell will affect anyone up to level 14 and the spell lasts for 60 seconds. Frenzy costs 209 magicka to cast.

Frenzy can be purchased from Drevis Neloren or Sybille Stentor (Blue Palace, Solituide) for 330 gold.

Much like courage, this adept level illusion spell will overcome the targets desire to run away and also give them a boost in health and stamina of 25 points each. Unlike courage, rally affects all targets in a 15-foot radius rather than a single target.

Rally can be purchased from Drevis Neloren or Sybille Stentor (Blue Palace, Solituide) for 300 gold.

Another one that does exactly what you think it will, the invisibility illusion spell will make you invisible for 30 seconds and costs 334 magicka to cast. You’ll need to be an expert in illusion magic (level 75). Invisibility is also a potion in Skyrim and you can create longer last versions with alchemy.

Activating objects or attacking will cause the spell to break. This also includes starting conversations, opening a door, pickpocketing, casting spells, or firing an arrow. Being invisible does not also make you silent and your footfall will alert enemies.

Pacify is the step up from calm as it will make enemies up to level 20 stop fighting for 60 seconds. The radius of this spell is 15-feet. Drevis Neloren will sell this when you reach illusion level 65 and it costs 610 gold.

Another expert level spell that is an upgrade from the weaker Fear spell. Casting this costs 316 magicka and people and creatures up to level 20 will flee for 30 seconds. Drevis Neloren will sell this when you reach illusion level 60 and it costs 653 gold.

The first of our master illusion spells (level 100) is Call to Arms. This spell is a step up from Rally but with some differences. You can cast this spell to give a 25-point boost to one-handed, two-handed, archery, health, and stamina for ten minutes. While incredibly useful it does have some downsides.

You will need both hands to cast this spell and it does take some time to charge up. The other thing to consider with this spell it that it has a radius and will give the positive boosts to both friend and foe. Therefore this is not a spell you want to cast in the middle of a fight but when you and your follower are preparing for one.

This spell can be purchased for 1150 gold from Drevis Neloren after having completed the illusion ritual spell (see below).

The ultimate in relaxation, this master-level illusion spell stops creatures and people from fighting for 60 seconds who are level 25 and below. Both hands will be needed to cast this spell and it has a 250 foot radius. This spell can be purchased for 1220 gold from Drevis Neloren after having completed the illusion ritual spell (see below).

Un upgrade to the Rout spell, this master-level illusion spell causes creatures and people to flee for 60 seconds who are level 25 and below. Both hands will be needed to cast this spell and it has a 250 foot radius. This spell can be purchased for 1240 gold from Drevis Neloren after having completed the illusion ritual spell (see below).

As the name suggests, this one is complete Mayhem and you should cast this in somewhere like Solitude or Whiterun just for fun (don’t forget to save first!) This master-level illusion spell causes creatures and people to go nuts and attack each other for 60 seconds. This spell works on people and creatures who are level 25 and below.

This spell can be purchased for 1250 gold from Drevis Neloren after having completed the illusion ritual spell (see below).

To gain access to the master illusion spells you will need to do the quest Illusion Ritual Spell. For this you will need to be Level 100 in Illusion and then talk to Drevis Neloren in the College of Winterhold. The easiest way to find him is to catch him asleep in his bed on the lower floor of the Hall of Countenance between 11pm and 7am. 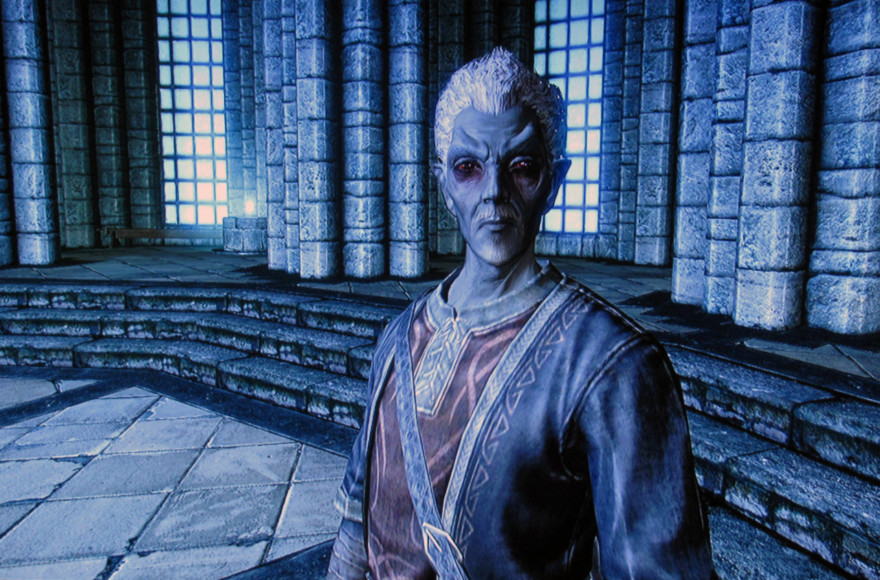 Talk to Drevis Neloren and he will give you the quest where you need to find 4 texts and then bring them back. The texts are dotted around the College of Winterhold.

Upon return the 4 texts you will be given one master spell tome (Call to Arms, Harmony, Hysteria, and Mayhem) and the other three will be available for purchase.

There you have it, you’re now a master of illusionary magic!

You may also be interested in our other Skyrim spell guides:

How do you get illusion spells in Skyrim?

Illusion spells in Skyrim can be found in chests or containers but are mainly purchased from merchants or from court wizards. The latter is the easiest place to find illusion spells.

What is the best illusion spell in Skyrim?

The best illusion spell in Skyrim comes down to what you want to use them for but the master level spells are the best. These are Call to Arms, Harmony, Hysteria, and Mayhem, and available after completing the Illusion Ritual Spell when you hit Level 100 in the Illusion Skill.

Where can I find high level illusion spells in Skyrim?

How do you get illusions to 100 fast?

There is a very easy way to get to level 100 illusion fast and this is by using the muffle spell repeatedly. It takes minimal effort and you can power level to 100 very fast.