Daggers are the best choice when it comes to assassinations (or fighting head-on). They’re lightweight, fast, and incredibly powerful.

Keep in mind that it’s a bit of a challenge to be stealthy and quiet when you’re dragging the biggest balls in all of Tamriel while equipped with this weapon type. And so, when you’re done clowning as a Sneak Archer/One-Handed weirdo, it’s time to sell your Nightingale set up and start your murderous rampage by stabbing everyone like a real pro assassin, even in broad daylight.

Skyforge Steel Dagger is one of the best starter daggers. You’ll get this weapon early on if you go to Whiterun first and follow through the Companions’ questline. Once you’re done with the trial and passed as a respected member of the Companions, Eorlund Gray-mane will forge any kind of Skyforge weapons you want.

This weapon weighs at 2.5 encumbrances and can be purchased for only 25 gold. The damage isn’t impressive, but considering that it outranks 11 daggers in base damage output of 8 AD (attack damage) while also being light, it’s pretty solid. However, it suffers from the lack of upgrading options, but it doesn’t stop it from taking lives and this list’s spot.

Note: You can also get this weapon during The Silver Hand quest or a random chance reward when you’re done with the Proving Honor quest. You can also nab this from Aela the Huntress’ pockets. It doesn’t benefit from any kind of Smithing perk and is non-upgradable. You can’t craft one of these.

Elven Dagger is a pretty good choice for dagger-wielders who recently just discovered that Thalmors are really the true enemies of Skyrim. It’s a decent dagger that you can get once you’re just about the right level of 20.

This weapon benefits from Elven Smithing perk by procuring an upgrade material called Refined Moonstone, by either smelting Moonstone ores or mining them. It isn’t actually any better than its Skyforge counterpart, but at least it’s upgradable. Its base values are as follows: 8 attack damage, 4 encumbrances, and costs 95 gold. You need 1 of each item so you can craft one: Iron Ingot, Leather Strap, Quicksilver Ingot, and Refined Moonstone.

Note: You can start terrorizing Thalmor Justiciars to get one of these cool-looking daggers, get one free from Delphine of Sleeping Giant Inn, or buy from the blacksmiths instead of being a criminal scum and violating the law.

Probably one of the best-looking Dwemer daggers, Keening is a valuable weapon that is blessed with an enchantment that absorbs 10 points of Health, Magicka, and Stamina, restoring your hit points with each successive hit, which can be procured by chance.

If you look at the base stats of this weapon, it is just like Elven and Skyforge daggers. But if you do the math, say, you hit 10 times in a row, Elven and Skyforge daggers will be outperformed by Keening if you manage to land at least 2-3 procs of its unique enchantment. With 8 damage, weighing 4 encumbrances, it’s no different than using Skyforge Steel Dagger, but its base value of 5111 gold makes it a treasure to obtain and keep.

Note: This dagger can be obtained during one Arniel’s Endeavors from one of the several radiant locations (ex. Gallows Rock, Mistwatch, Uttering Hills Cave, etc.) or as a reward when you finish The Citadels of Sixth House quest. It is also needed to access the Heart of Lorkhan, deep inside the Red Mountain. Cannot be crafted nor upgraded.

Glass Dagger is the second-best dagger in the game after playing the game straight for 4-8 hours. Once you’re good enough to explore a little bit of Skyrim, you’ll encounter one of these beautiful daggers from almost everywhere. You’ll even wonder if the merchants are keeping this weapon from you in the first place since once you’re level 20+ already, they’ll have this available in their shop.

This weapon benefits from Glass Smithing and can be upgraded using Refined Malachite or by mining veins. It deals 8 damage, weighs 4.5 encumbrances, and is valued at 165 gold.

Note: You can get one of these by visiting your local blacksmiths, slaying male Forsworns, or going to the Northwatch Keep and killing the guards. Forge one from the blacksmith by getting 3 items: 1x Leather Strip, 1x Refined Malachite, and Refined Moonstone.

Do you like tall, long, and dark daggers, aside from being extremely stylish? Well, here you go. Ebony Dagger is one of the slickest weapons in the game, especially with its intricate design, which also goes well when paired together with the Nightingale Armor set.

Once you’re past level 35, you’ll be seeing this weapon everywhere. It’s pretty much the same as the Glass Dagger that you can unlock once you level up enough, in this case, it’s 36. It benefits primarily from Ebony Smithing and can be enhanced using a material called Ebony Ingot.

Note: You can get one of these from merchants and blacksmiths or from Cicero. Initiates and new recruits from The Dark Brotherhood are also equipped with this dagger. 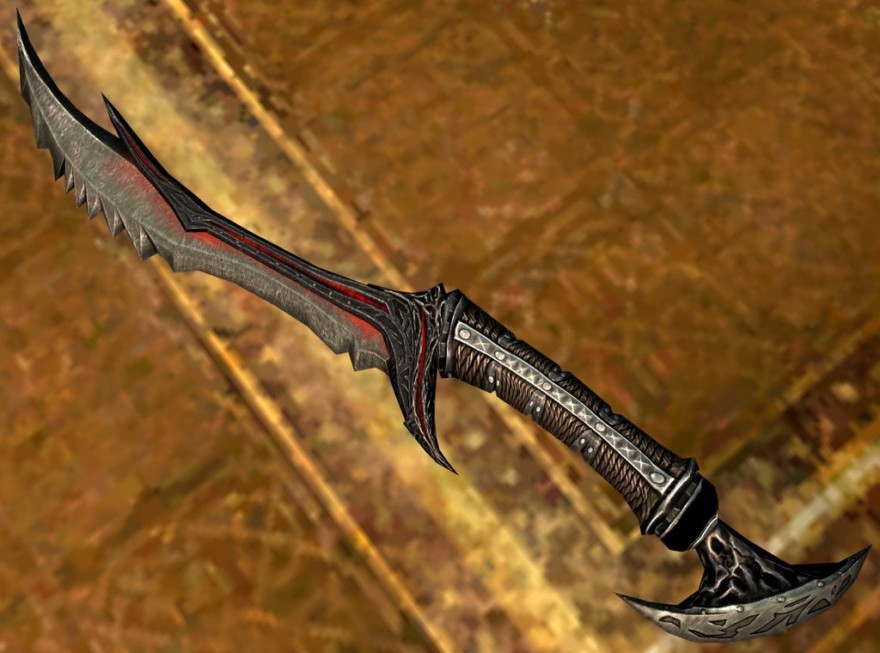 Ah, yes. The dagger that boasts not only its nasty look but also its atrocious damage. Daedric Dagger is one of the best daggers in the game. Its intimidating looks will really put a smile on your face and your victims’ throats once you start wielding this abomination.

Daedric Dagger boasts high base damage, second only to Mehrunes’ Razor and the Dragonbone Dagger. With its 11 base damage, you can go even further with just a small price of an Ebony Ingot. Weighs 6 encumbrances, and is valued at 500 gold.

You can craft one of these by obtaining 1 Daedra Heart, 1 Leather Strip, and 1 Ebony Ingot.

Note: Available at blacksmiths and merchants once you’re Level 47+, using Black Market and calling forth the Dremora Merchant, or from killing legendary dragons.

Stalhrim Dagger is one of the unique daggers in Skyrim that gains a lot from Ebony Smithing and the 25% increase in damage using a Frost Enchantment.

You can get one of these daggers from the Skaal weapons forger, Baldor Iron-Shaper, or from Glover Mallory in Raven Rock, Solstheim, or randomly via chests and loots. For a small price of 1 Stalhrim and 1 Leather Strip, you can boost the already powerful base stats it possesses, which are 10 base damage and 4.5 encumbrances, priced at 395 gold.

The highest base damage output of all the daggers in the game, Dragonbone Dagger, is the primal weapon of vanilla Dragonborns when they’re sick of Lydia trying to carry their burdens and wants to step up their dragon hunting game.

Its base value is the highest in the dagger type, as it has 12 damage, 6.5 encumbrances, and valued at 600 gold. Using a Dragon Bone, this weapon can be improved even further, especially when you level up your Dragon Armor perk.

Note: Dragonborn DLC-exclusive weapon. Can’t access this. Maybe if you buy Skyrim for the 7th time on PS5, you will.

Easily one of the best daggers in the game. Its innate enchantment, which is the Absorb Health, which deals 10 damage to your enemies and restores 10 hit points back to you. Its range is also similar to that of a short sword. However, using this does come with a heavy price, as it is actually the heaviest dagger in the game, with 7 encumbrances, but does weight really matter at this point?

This weapon doesn’t need an upgrade and benefits from Steel Smithing perk.

Note: You can get one of these daggers as a quest reward by doing the Death Incarnate quest, stealing from (with Misdirection perk), or killing Astrid during With Friends Like This quest. You can get two copies of this dagger.

Hands down, the best dagger in the game. Imagine instantly killing legendary dragons. Well, you don’t need to imagine as this weapon has an innate instakill, with a chance of 1.98% each time you hit with it.

This weapon also benefits from its infinite charges imbued into the dagger, so you never need to bring a soul gem in your adventure life while using this. It is the lightest dagger in the game and is extra powerful when you wield it with your left hand (double hit) whilst using another dagger. It is also worth noting that it benefits greatly from Arcane Enchantment, as well as Ebony Ingot being used for upgrades.

Note: You can only obtain this weapon if you have the guts to kill an innocent and unarmed Silus Vesuius during the Pieces of the Past questline.

There’s no best dagger in the game, but if you’re planning to choose which one you’ll bring to kill Alduin in one hit, it’s probably best to use this guide instead of trying to meta-run the whole game with One-Handed and Sneak Archer combo, which probably the worst kind of subclass, next to being a mage-thief or a conjurer. But, it’s all opinions. Do what your heart Shouts. If it’s Fus Roh Dah, just bailout. Not worth it.