The Dragon Ball series has been around since 1984 thanks to Akira Toriyama. Dragon Ball Z landed in 1989 and is typically the more well-known spin-off of Dragon Ball.

For any readers who grew up in the late 1990s/early 2000s, you likely came across the Dragon Ball Z animated series very early on in your childhood and continued to watch re-runs of it.

You also may have loved the various Dragon Ball movies that have been released over the years.

Once hooked, video games were logically the next step. Readers should note that we’re focusing on more recent releases rather than retro games in this article.

Let’s start off our list with the last Dragon Ball Z 3DS game. Dragon Ball Z: Extreme Butōden was released in 2015. It may not have strong story links, but if you’re someone who prefers the fighting element of a game, then this release is something you’d enjoy.

Dragon Ball Z: Extreme Butōden is fast-paced; you’ll need to learn your move sets and learn them quick to unleash your character’s power on their opponent.

Over 100 characters are featured in this Dragon Ball release, and you can play 25 of them to find their potential.

Dragon Ball FighterZ is often mispronounced. The “FighterZ” part of the name is said as “fighters,” rather than “Fighter Z.” The stylisation is likely a nod to the Dragon Ball Z universe, and this game certainly did its predecessors proudly.

Dragon Ball FighterZ has been said to be one of the best fighting games of its generation of release (the eighth generation of consoles, which started with the Nintendo 3DS in 2011 and is still going today).

This game is praised for every aspect of play, particularly the control system and the visuals. You start your match by picking three characters from the 24-character roster, and you can switch out your characters at any time.

Some of the skills that you’ll need will have to be taught by masters that you can find in the game. To start playing, customize your character and pick one of five races.

There are questions, minigames, and many fights to be had; it wouldn’t be a Dragon Ball Z game without them, after all.

February 2015 set the release for this game that could be played on any one of five different systems.

The main difference between the two games is that the story plot of Xenoverse progresses from the first release to the sequel. The features, however, remain the same.

That said, if you still have a PS2 knocking around, Budokai 1 & 3 were originally released on that system. As a re-mastered version, though, the collection certainly did well for itself.

Speaking of the Budokai series, the game that tops every single DBZ game list is always Dragon Ball Z: Budokai Tenkaichi 3.We’re going into much older territory, but as many fans note the game as the top Dragon Ball game, we had to put it in!

With 150 playable characters, 20 stages to play on, and hidden content to unlock from the previous Budokai Tenkaichi games, it’s really no wonder every DBZ fan has their eye on this game still. 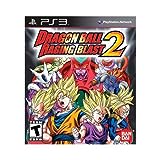 3D gaming in its developing stage is evident in this particular game, but it’s as dramatic and fun to play as the others listed here.

Raging Blast 2’s fighting features include a technique called Raging Soul, where your physical attacks become stronger – but you are restricted from using ki attacks.

A great game to replay if you have a PS2 to dust off, especially if you have time to release the infamous Spirit Bomb.

Simple controls, easy mechanics. Die-hard DBZ game fans have mixed opinions on Dragon Ball Z: Burst Limit, but the matter of the fact is this: This game is geared towards having a fighting play style more like other fighting games, rather than those other Dragon Ball games like the Tenkaichi Dragon Ball games had.

If you like other fighting games, this is another one you should try to pick up.