To date, there are 21 Dragon Ball movies in existence. 15 of those animated movies are set in the Dragon Ball Z universe, starting with Dragon Ball Z: Dead Zone in 1989 to the present day, where our last DBZ movie was Dragon Ball Z: Resurrection ‘F’ in 2015. Here, we’ll look at the top 10 best Dragon Ball Z movies to grace our television screens over the years.

In the Dragon Ball Z universe, Cooler is the lesser known elder brother of Frieza. Dragon Ball Z followers will remember all of the various ways Frieza has shown up; his brother does things the same way – henchmen, planet invasion, fighting, ultimately losing.

But what’s interesting about this film is that they tried to take the spotlight off of Goku for a little while. The typical Z Warriors take his place for some time, but ultimately, Goku does come in near the end to save the day. 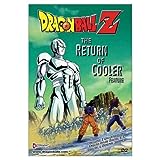 The sequel of Cooler’s Revenge is the first time we see the Dragon Ball series get a little crazy. Due to the previous film, a lot of the backstory needed already existed, so there were less set-up and more time for them to play with the story.

The Return of Cooler brings in Vegeta, who finally gets some time to shine in a movie. Vegeta, as we all know, it’s a bit of a hard-knock; he’s stoic, strong, and always makes an entrance. His help is sorely needed as the Z Warriors take on hundreds of Metal Cooler clones, who are all basically robots.

Completely turning the tables of this article, Resurrection ‘F’ (if you haven’t guessed by the title) is all about Frieza. Without a doubt, he’s the best DBZ baddie, and the most liked, as well.

Resurrection ‘F’ has amazingly crisp animation and the epic battle scenes that we all expect from any Dragon Ball movie. In this one, Frieza shows off his Golden form, going head-to-head with Goku’s Super Saiyan Blue form. There is one scene that is a let-down, but Goku manages to get back up and win.

Wrath of the Dragon has driving energy behind it. At the time, it was seen as the end of the Dragon Ball Z films, and for all intents and purposes, it was. Another movie wasn’t released until the Battle of the Gods, almost 20 years later.

The storyline is very straightforward, and it’s the second DBZ movie to combine animation types by integrating computer animation into the piece. The style is breath-taking in a way because you can truly see how far the style has come over the years.

The first of three Broly-related movies to grace DBZ, and undoubtedly the best. Despite the sudden appearance of Broly, who has a story that seems fairly familiar, this movie’s long runtime is used well.

Broly is more unhinged than previous enemies that the Z Warriors have fought. He’s twisted in a way that can only be described as sadistic, and it adds a different, more suspenseful, atmosphere to the movie. The fight scenes are chaotic and utterly perfect.

Bojack Unbound takes place during the part of the series where Goku has already died. To make things more interesting, this movie’s focus is all on Gohan. We also get to see Piccolo turn up to help Gohan, and their mentor-mentorship relationship has always been one of the best.

Dragon Ball creator, Akira Toriyama, was extremely involved with this movie when it was being put together. It’s obvious that there’s something different about this movie to the ones that were released before and after it.

Dead Zone is the very first DBZ movie. As such, the cast was small, and the characters are all very young. Gohan, who is practically a toddler, is wandering around wearing his Dragon Ball hat and he gets kidnapped because of it (surprise, surprise).

Goku storms the castle of the kidnapper, the demon called Garlic Jr., and start taking some names. Because, of course, if you’re going to get home to see your family beat up and your son missing, you’re going to be a tad angry.

Fusion Reborn is a mess and a masterpiece. There is so much going on in this movie that if you turn away for a moment, you will miss something. Each character seems always to be doing something, and there are so many of them in this storyline!

This movie was made for fans. It is everything they wanted, from a full character cast to new a fusion form for Goku and Vegeta that comes off as something exciting and planned, rather than an attempt at gratuitous fan service.

The World’s Strongest is one of the most original plots to come out of the DBZ movies. Dr. Wheelo, who is just a brain in a machine, seeks out the world’s strongest fighter so that he can use their body as his own.

It’s a well-animated movie and includes Master Roshi getting in on the action (not something that often happens in the series). The ending is super dramatic, too, if a little samey.

We’re going to finish this piece off in an unconventional way. With a Dragon Ball Z animated movie that’s not a movie, but a TV special, instead. The History of Trunks is only 48 minutes long and was originally aired in between episodes 175 and 176 of the anime.

However, The History of Trunks is widely regarded to be one of the best (if not, the best) Dragon Ball Z animated “movie.” It shows a dystopian future where Goku succumbed to his heart issues and Trunks (Vegeta and Bulma’s son) was trained by Gohan (Goku’s son).

This TV special touches on the story of Trunks that the anime series, itself, never told. Viewers always knew bits and pieces of Future Trunks and Future Gohan’s lives, but nothing to the depth that his 48-minute special tells us.

[…] but the concept of new challenges is a universal phenomenon; and many of us who grew up watching Dragon Ball Zoften find great comfort in Vegeta’s willingness to face his own fresh challenges so […]

[…] If you haven’t seen Fullmetal Alchemist: Brotherhood yet, we will assume that you’re either living under a rock or are someone who believes they’ve never watched anime and doesn’t realize they actually have (Pokemon, Yu-Gi-Oh, Dragon Ball Z…). […]

This movie had some awesome fight scenes and showcased the original Evil Goku before Black Goku came along. This film has some of the best animated fights from the series plus Turles was a badass. The Broly films suck and shouldn't even be in the top ten.

That's a shame. I always thought Broly was a cool character! Thanks for stopping by.