Josei is “women’s comics” that are focused on women’s interests and targeted to the older teenage and adult girls. Of course, a lot of these series are popular with all ages and can be enjoyed by any anime fan.

You can’t have josei without drama and slice-of-life vibes. Have fun getting to these unique and story-driven series, ladies and gentlemen! 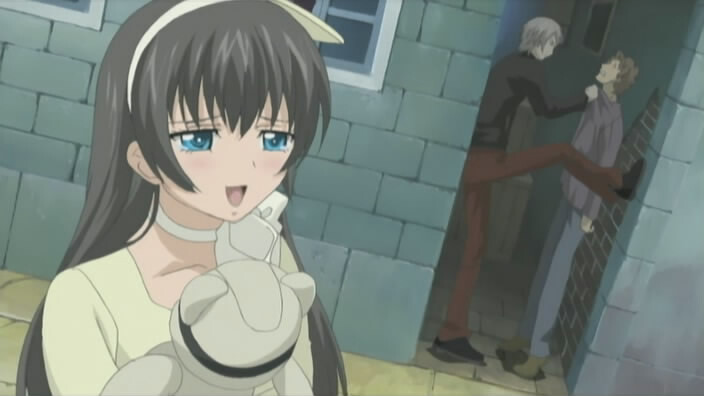 Despite being the daughter of a wealthy family, 14-year-old Rahzel is kicked out of her house by her father. He tells Rahzel that she needs to go on a journey to “see the world” and gain life experience.

With the ability to use magic, Rahzel finds Heat and Alzeid, two guys with the same journey as her, and set together to discover the best and worst of the world. 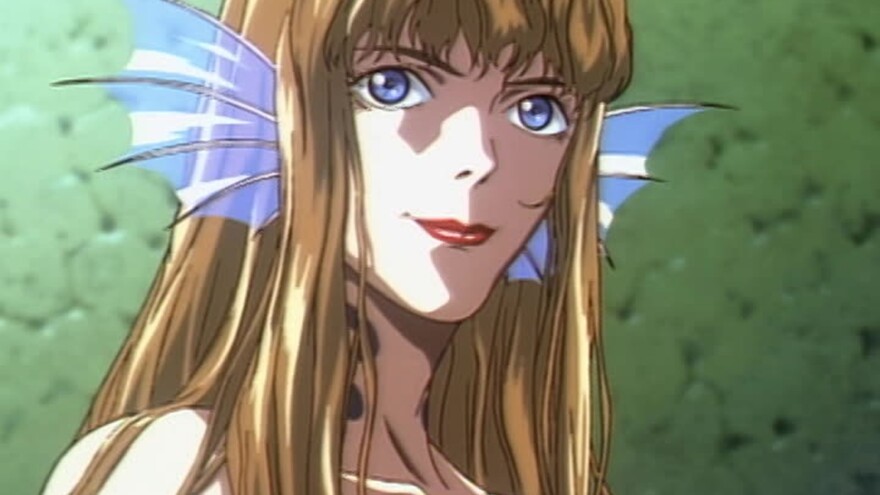 Hidden in Chinatown is a quiet pet shop owned by a strange man named Count D. He sells rare and special kinds of animals.

If you ever desired such a creature, you’d better be prepared to sign a contract with Count D. If you are to break a rule in the contract, the pet cannot be held responsible for the misfortune that follows you.

Following strange links to unexplained deaths, homicide detective Leon Orcot is the one to find himself on the doorstep of Count D’s pet shop and, of course, all the unexpected horrors that dwell within! 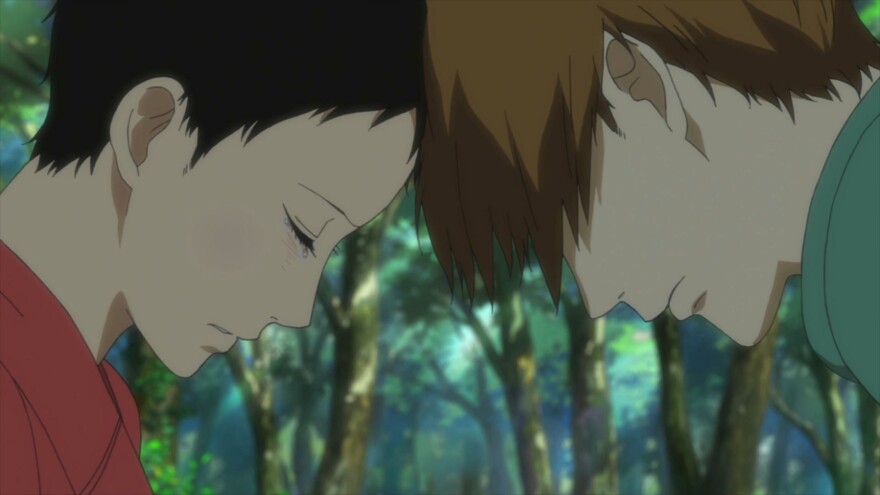 Ryousuke Hazuki is a young man in love! His heart belongs to Rokka Shimao, a beautiful girl and owner of a floral shop. Ryousuke manages to get a part-time job in her shop in hopes of getting closer to her what he doesn’t expect to find in the ghost of Rokka’s deceased husband!

Atsushi Shimao has been watching over his wife as a ghost for years, and Atsushi will do whatever it takes to keep Ryousuke away from Rokka!

Ryousuke doesn’t want any trouble. He wants to help Atsushi pass on in peace so Rokka can move on too—with him! Unfortunately, neither man nor ghost is willing to back down, and it will be Rokka who gets caught in the crossfire. 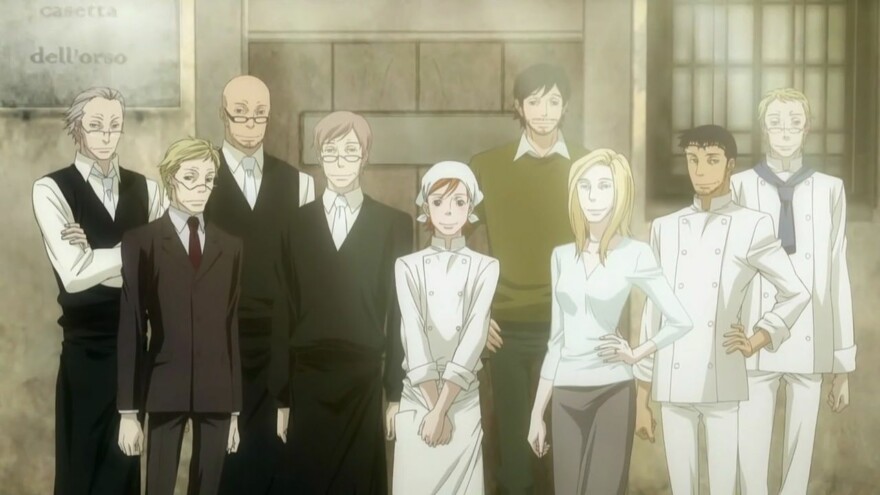 Nicoletta was abandoned by her mother, who ran away to get herself married! Turning 21-years-old, Nicoletta travels to track down her cowardly mother and use her revenge to ruin her life!

She finds her mother at a restaurant named Casetta dell’Orso—surrounded by handsome gentlemen! Who knew that was what it took for Nicoletta’s sense of revenge to fizzle away and sweep her up in a life of romance~. 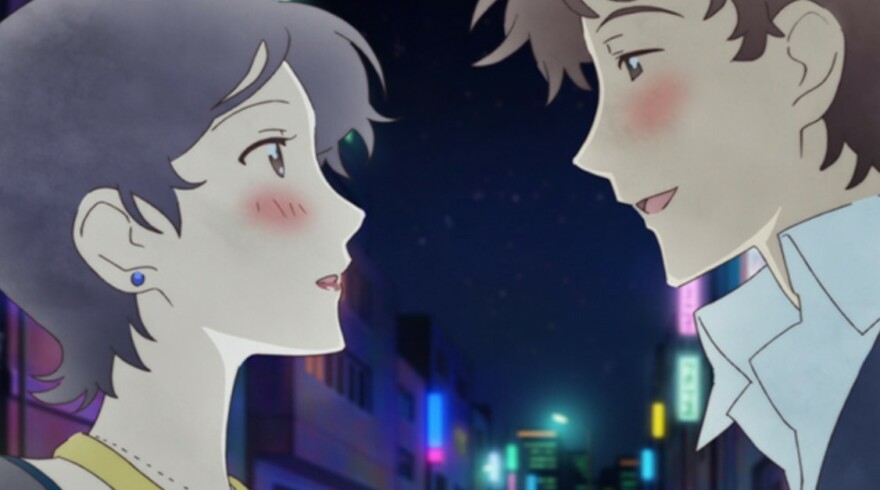 A complication of four short stories following different women and their stories. Dokoka Dewanai Koko: follows a 43-year-old housewife who gets roped into a complicated relationship with her daughter.

Jinsei Best 10: businesswoman Hatoko dreads her looming 40th birthday, but things start to look up when she reunites with the one who shared her first kiss back in middle school~. Yuuge: a wife named Mimi in her late 20s who leaves her family to live with a young man.

Kawamo wo Suberu Kaze: 33-year-old Noriko is a college graduate, wife to an elite man, and has a loving child. Noriko has to all. However, coming back from aboard, a man approaches her with a huge secret that could destroy the life she worked so hard to build!

10. Hakuoki ~Demon of the Fleeting Blossom~ 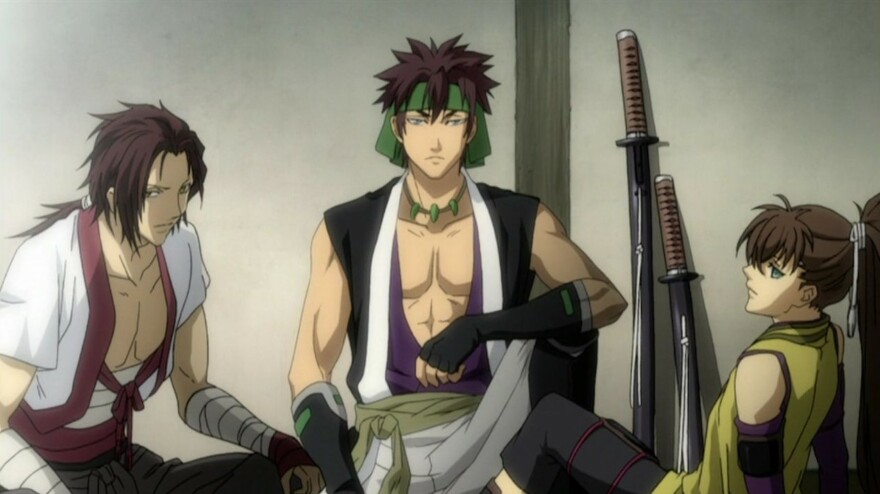 Taking place in Japan in 1864, Chizuru Yukimura is desperately searching for her father, a doctor who went missing. Knowing no one will listen to her as a woman, Chizuru dresses herself up as a man and travels to Kyoto to looks for her father.

Chizuru ends up witnessing the murder of a ronin at the hands of a man with pure-white hair who wishes for her eternal silence. But, revealing her father’s name, the man reveals to be looking for him too and decides to spare her life.

Chizuru begins to side all the hidden sides of enemies and political conflict looming over Kyoto with this mysterious man at her side. 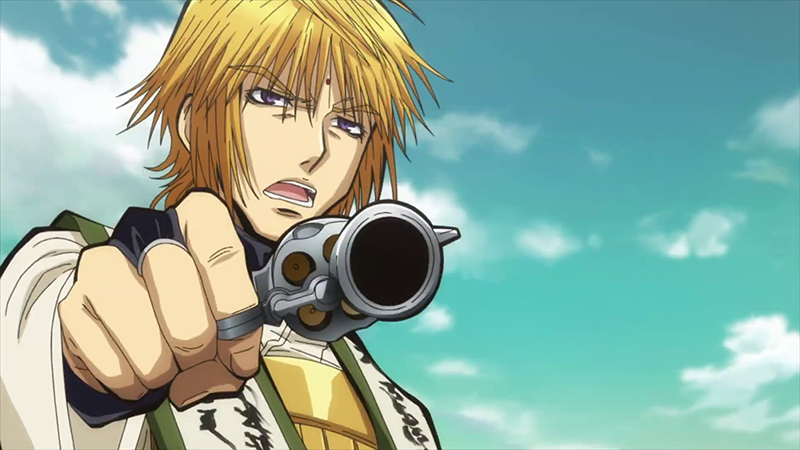 For years now, humans have managed to live side-by-side with demons and held peace with them. Unfortunately, this peace doesn’t last forever as the demons turn on the humans, attacking them and desiring to unleash an evil and powerful demon called Gyumao.

To stop the demon from bringing back Gyumao, a rogue priest named Genjo Sanzo joins forces with good demons to save his people and restore peace between humans and demons. 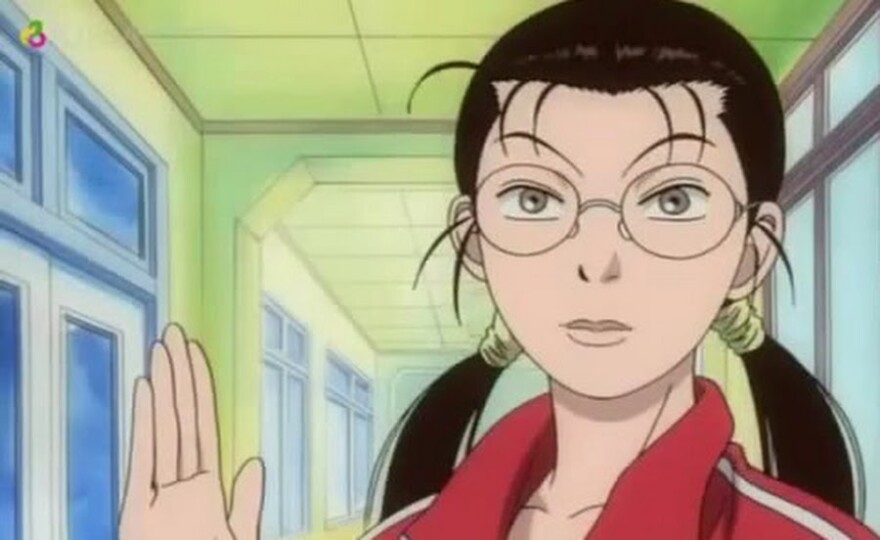 Becoming a math teacher at Shirokin Academy is a dream come true for Kumiko Yamaguchi. Unfortunately, it turns out this all-boys school is full of good-for-nothing delinquents who want nothing to do with Kumiko and the knowledge she can share with them.

Little do any of these kids know is that Kumiko is no pushover but, in fact, the head of a yakuza clan! Using her skills, strength, and influence, Kumiko is really to get these boys into shape while trying to keep her yakuza heritage a secret.

Despite making enemies with the vice-principal and leader of the delinquents, Shin Sawada, Kumiko is determined to help her class and teach them how they can become their best selves! 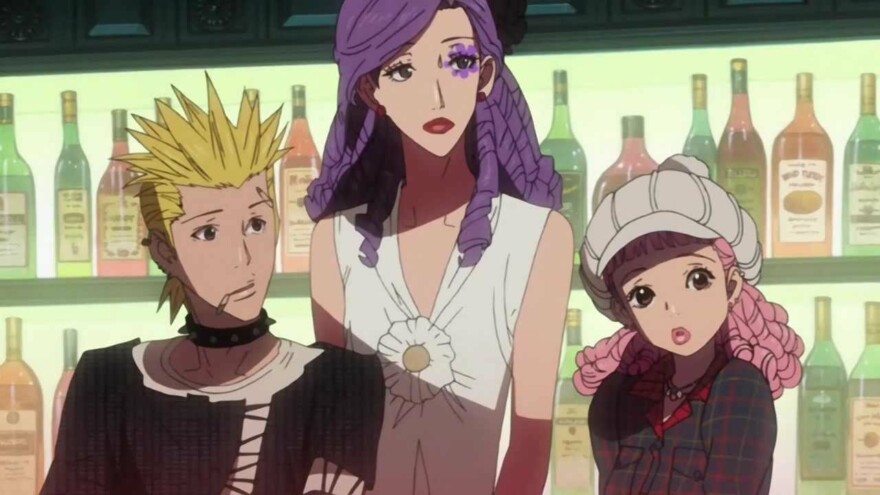 Walking home from school, 18-year-old Yukari Hayasaka is stopped by a strange-looking man with spiky hair and piercings. Looking her up and down, Yukari runs away and ends up fainting.

She wakes up in a place called the Atelier, and this weird man is George Koizumi, a fashion designer who wants Yukari to be his model. Yukari quickly turns him down and leaves, but George will do whatever it takes her to find her again and have Yukari be his model.

Before Yukari is ready for it, her life is about to get swept up in the world of art and fashion! 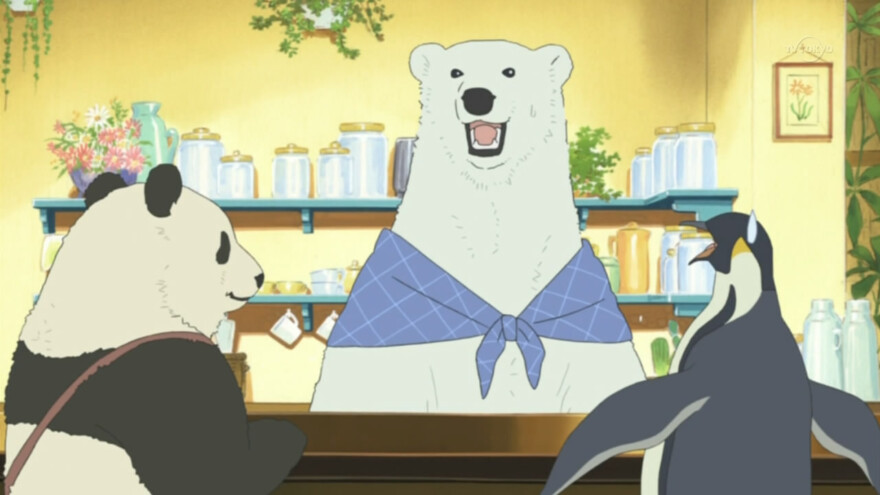 Besides the local zoo, Shirokuma the polar bear owns the Shirokuma Café. For both animals and humans similar to takes a sit and relax with a nice cup of coffee.

Shirokuma loves taking care of hardworking animals and humans with a delicious beverage and food on the menu.

Together with his friends Panda the klutz and cynical Penguin, Shirokuma has a fun conversation with their many customers and all the wacky adventures that can take place within a small café. 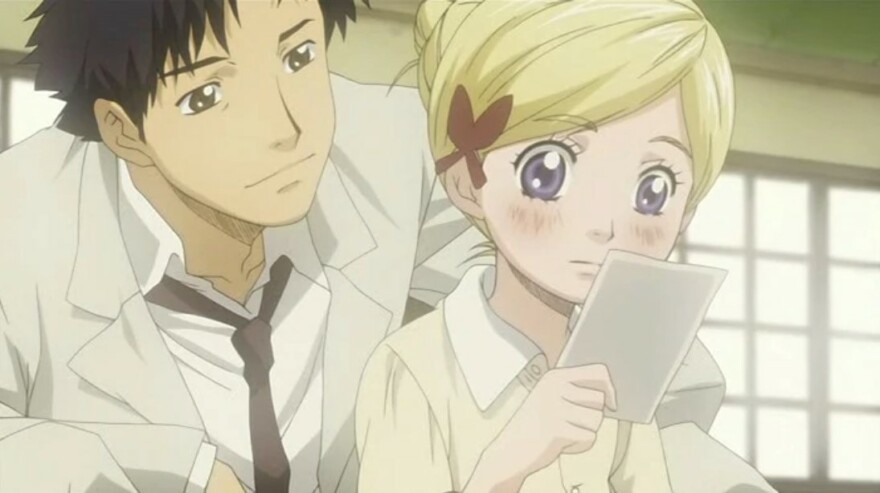 College student Yuuta Takemoto bunks with his friends Shinobu Morita and Takumi Mayama. Despite being in an art college, Yuuta doesn’t think much about the future. Luckily, new student and gifted artist Hagumi Hanamoto changed everything for Yuuta.

He immediately falls in love with the petite blonde. Wanting to get closer to Hagumi, Yuuta notices she’s made quick friends with Ayumi Yamada, a friend already to their small group.

Yuuta is quick to take advantage of this new friendship to become friends with Hagumi, but Yuuta doesn’t know as Ayumi has secret feelings for one of his friends on her own. 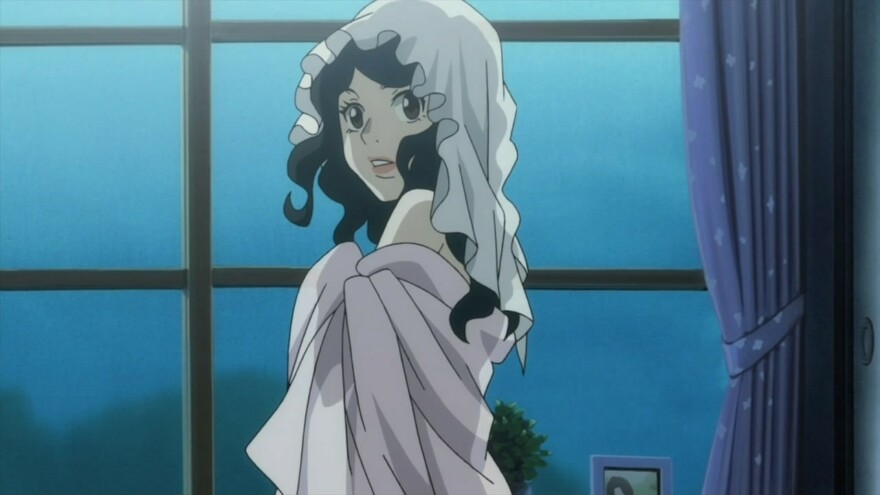 19-year-old Tsukimi Kurashita has been obsessed with jellyfish ever since her late mother to her to an aquarium. She used to believe every girl would grow up to be a beautiful princess, now as an unemployed otaku, Tsukimi isn’t so sure of that.

One day, while trying to save a jellyfish’s life as a pet ship, Tsukimi comes face-to-face with her polar opposite: a striking, confident, and fashionable girl!

Somehow becoming quick friends with Tsukimi, the girl shows her the side of fashion as well as politics when Tsukimi finds out that the girl is actually a wealthy guy named Kuranosuke Koibuchi! 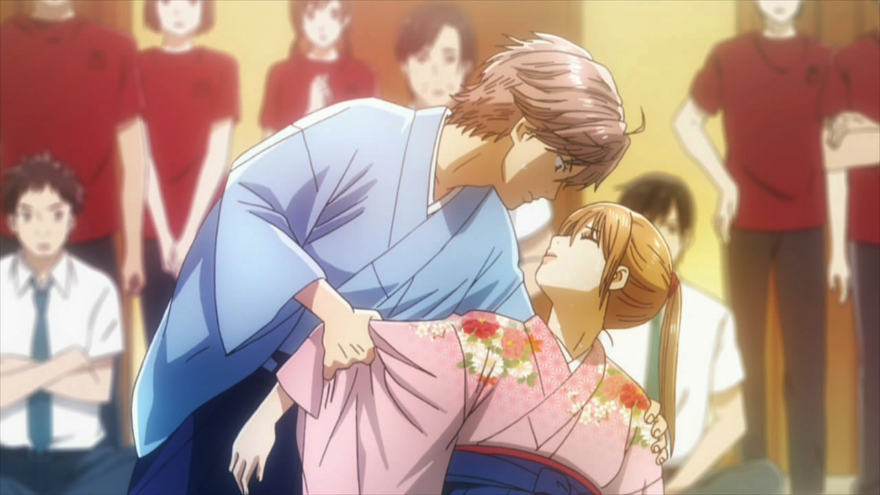 Growing up in the shadow of her older sister, Chihaya Ayase never had dreams of her own. But, this all changes when a soft-spoken boy named Arata Wataya transfers to her elementary school. Arata is a prodigy in karuta, a competitive card game.

Inspired by Arata’s passion, Chihaya starts to play karuta too and falls in love with the sport. Even after Arata has to move away from Chihaya, she never stops playing karuta.

Even in high school, to her childhood friend Taichi Mashima’s dismay, Chihaya is still extremely skilled at karuta and dreams to reach the Nationals, who she hopes to reunite with Arata! 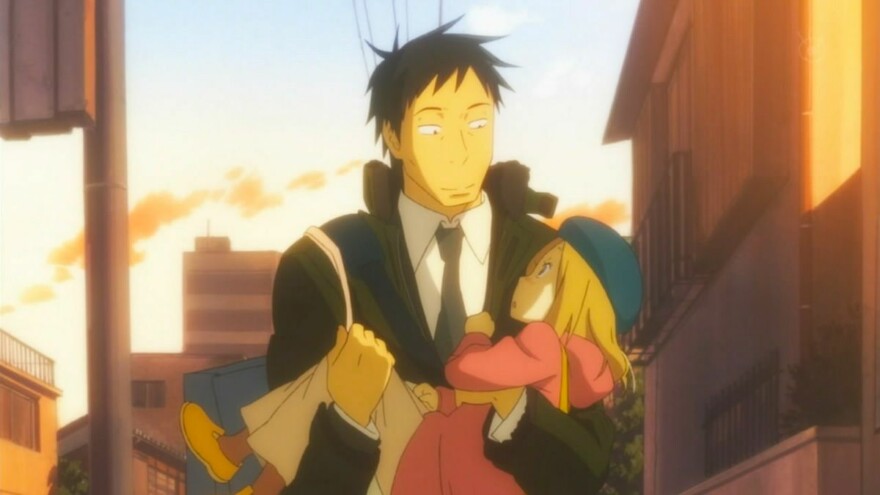 30-year-old bachelor Daikichi Kawachi has always lived a comfortable life but has never been excited or challenging. This changes when he learns his grandfather has passed away.

Going back home, Daikichi meets a young girl named Rin, who is his grandfather’s illegitimate daughter! Of course, being a scandal of the family, no one wants to take in Rin.

So begins the rough ride from bachelor to fatherhood, Daikichi announces that he will take care of Rin! 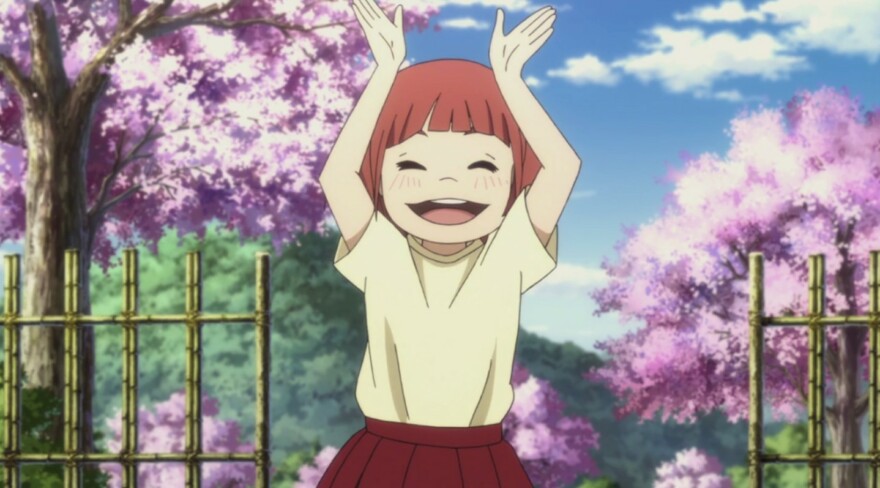 Being a yakuza landed Yotarou in jail. Finally getting out of prison, Yotarou wants nothing to do with the criminal life or the yakuza. Instead, Yotarou finds himself being drawn to becoming a rakugo, a traditional Japanese comedic storyteller! A far cry from being a member of the yakuza.

Yakumo Yuurakutei is the man who inspired Yotarou down his new path and now must take responsibility for him by taking him on as an apprentice!