Music that changes the world! Some are literally surrounded by war and loss, and others helping kids survive high school.

Giving characters a reason in life through singing and writing their hardships and love through music or surrounding them in a band and a play to belong, these music-themed anime series are some of the greatest anime of all time with long-lasting franchises and fans!

You might also find your favorite real-life singer and musician that bring these shows and character to life! 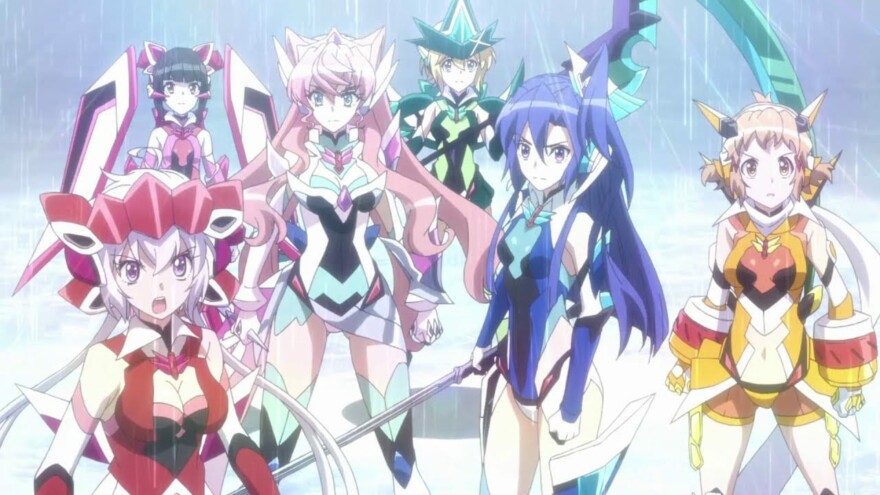 Two-year-ago Hibiki Tachibana went to see Kanade Amou and Tsubasa Kazanari, her favorite idol group. What she didn’t expect was for her and the whole crowd to be attacked by alien creatures known as the “Noise.” Once more, that Kanade and Tsubasa would use weapons called “symphogears” to combat the deadly creatures with their singing.

When the Noise almost kills Hibiki, Kanade sacrifices herself to save her, a fragment of her power being embedded within Hibiki. Now, the world needs Hibiki to use Kanade’s symphogear to fight against the Noise that threatens to destroy her peaceful life. 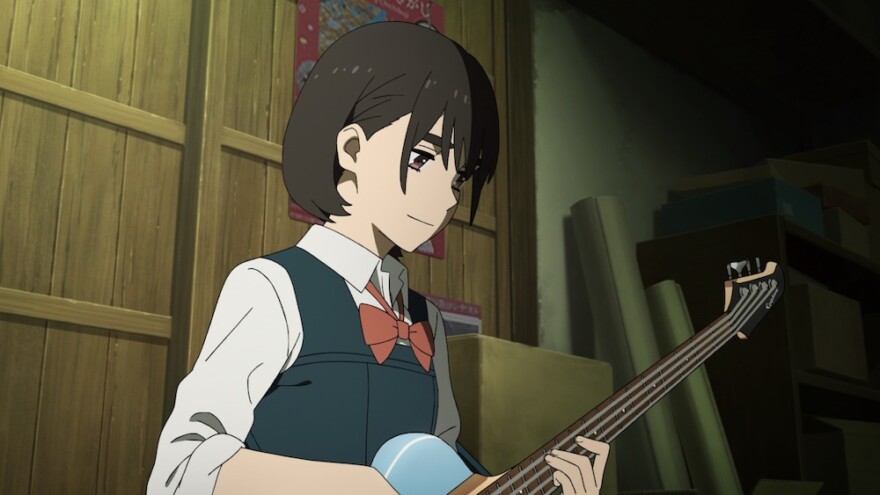 Ever since losing both parents at a young age, Aoi Aioi has been taken care of by her older sister Akane. Feeling like a burden to her sister, Aoi hopes to move away to Tokyo after graduation and follow her dream of music.

Aoi’s dream stems from Akane’s ex-boyfriend Shinnosuke “Shinno” Kamamuro, who suddenly disappeared after moved away to become a professional guitarist.

Out of the blue why playing on her bass guitar, Aoi finds herself face-to-face with 18-year-old Shinno! At the same time, 31-year-old Shinno has come back to town but lost his strong will and free spirit Aoi always remembered! Aoi doesn’t know why there are suddenly two Shinnos but is determined to help them both! 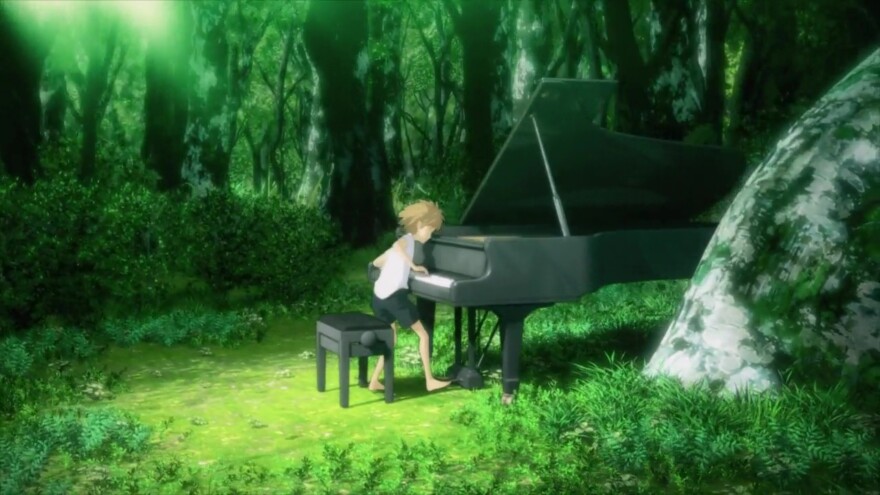 Transferring to Moriwaki Elementary school, Shuuhei Amamiya tries to make friends by showing off his talent for playing the piano—instead, he makes himself target number one for school bully Daigaku Kanehira. He dares Shuuhei to go into the forest where a cursed piano is said to sit.

Shuufei finds the piano—along with its owner Kai Ichinose, a kid who claims to be the only one who can play the lone piano. Listening to Kai play, Shuuhei wants him to come back to school with him to learn how to play from his music teacher Sosuke Ajino. 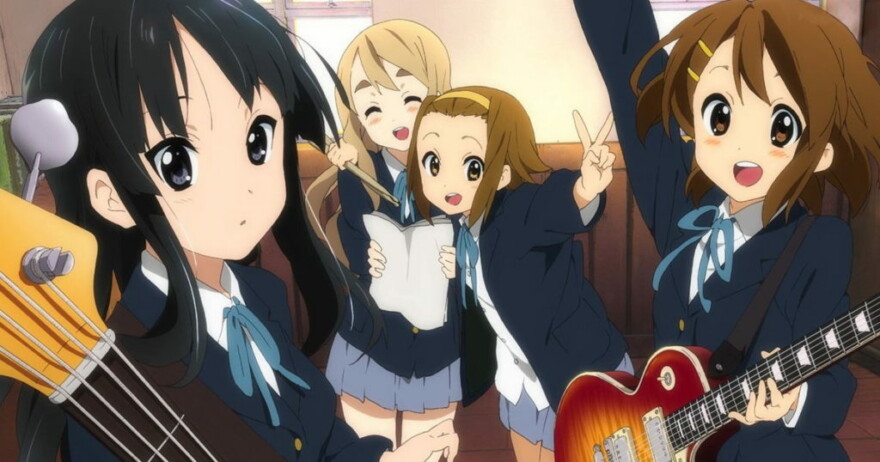 First-year in an all-girl high school, clumsy Yui Hirasawa becomes desperate to join a club, but nothing that requires too much skill as she has none.

Yui stumbles upon the Light Music Club and, thinking it easy, joins. It turns out she is now a part of a band and must learn how to write music and play a musical instrument.

Yui immediately wants to quit, but without her, the club will be disbanded from lack of members! So what has Yui gotten herself into? 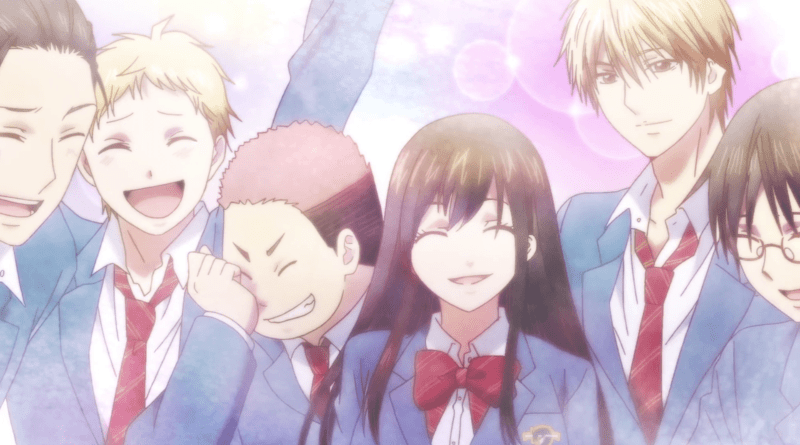 Despite being known as a delinquent, Chika Kudou wants to make his koto (Japanese harp) maker grandfather proud and join his high school’s Koto Club.

With the club desperate for members, Takezou Kurata, the club’s president, has no choice but to accept Chika’s application despite his undesirable reputation.

Chika is determined to show everyone his passion for playing the koto. With koto prodigy Satowa Houzuki and Chika’s friends being strung along, the Koto Club just got a lot livelier as they pushed to make it to Nationals! 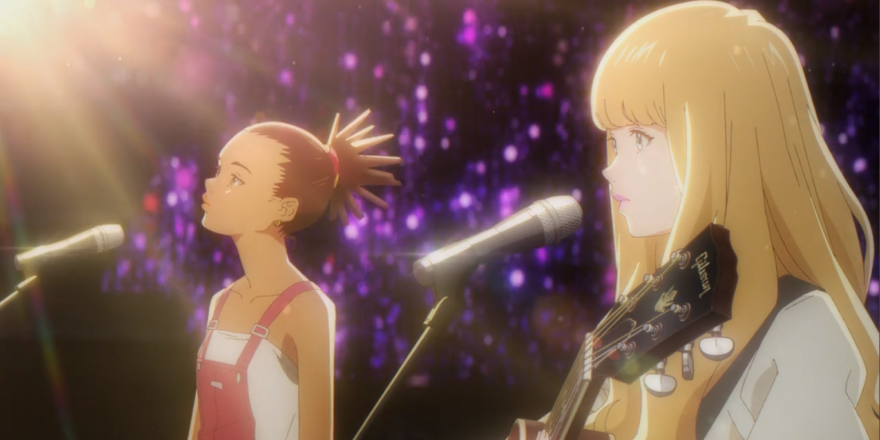 Two totally different worlds come together and find each other through music. Carole is an orphan working part-time during the day while playing her keyboard on the streets in the evenings.

Blonde and petite Tuesday ran away from her wealthy family and got robbed the minute she made it to the city. All she has is her beloved guitar.

Tuesday finds Carole playing alone and wants nothing more than to play alongside her! In a world that is being dominated by AI music and singers, can Carole and Tuesday’s old-fashioned love for music make a mark on the world? 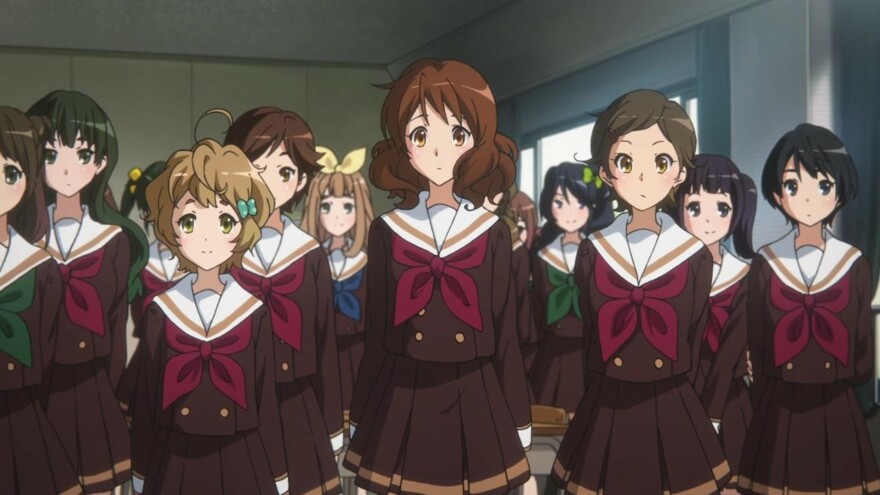 Failing to make it to Nationals in middle school, Kumiko Oumae wants nothing to do with music when she starts her first year in high school. It’s probably for the best since her new school’s music club sucks.

When her new friends want nothing more than to join the school band, Kumiko finds herself being dragged along. At least she can pick a new instrument to play—no, she’s stuck with the euphonium.

Kumiko has no desire to try for Nationals—the rest of the class does, and their new music teacher, Noboru Taki, is determined to make it a reality! Have fun, Kumiko! 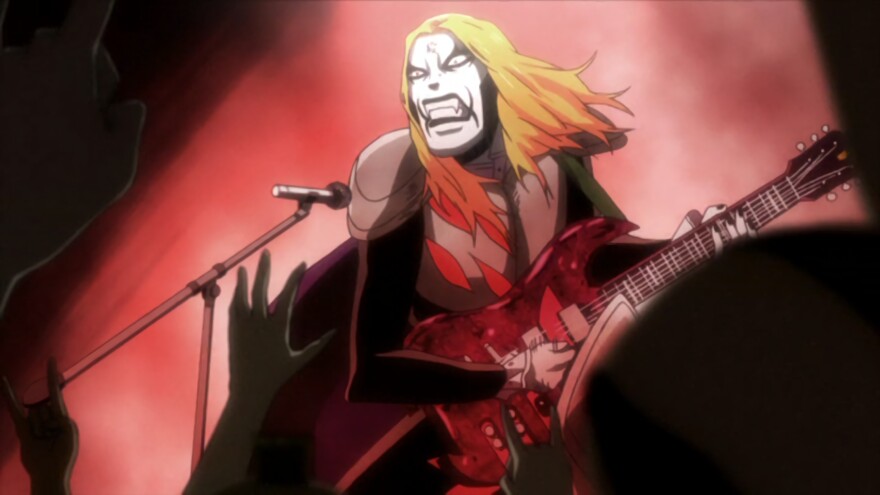 Detroit Metal City is one of the most popular death metal bands in the world of indie music! All led by their lead singer, Johannes Krauser II, a demon who broke out of hell to bring the world to its knees through his hellish music! At least…that’s what he tells his fans.

In reality, Krauser II is Souichi Negishi, an everyday college graduate. The death metal singer is actually a soft-spoken guy who plays in his band to make ends meet and doesn’t even really care for death metal music! 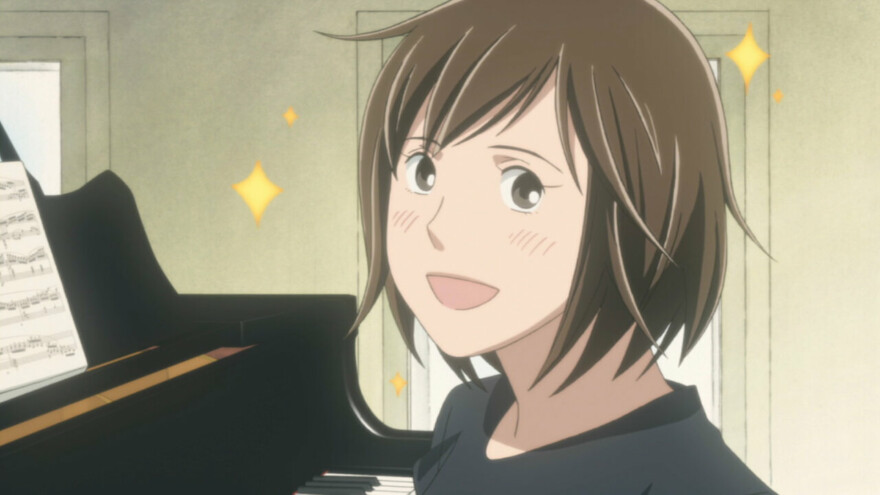 University student Shinichi Chiaki comes from a well-known family, making him a perfectionist and a talented musician who dreams of playing in Europe among the music elites. However, his fear of flying keeps Shinichi grounded in Japan!

Staying in Japan’s top music college, Shinichi meets his neighbor Megumi “Nodame” Noda. She’s an indecisive girl who is rough around the edges that Shinichi quickly dismisses—until he hears her play the piano. Will music be the missing piece for these polar opposites to fall in love? 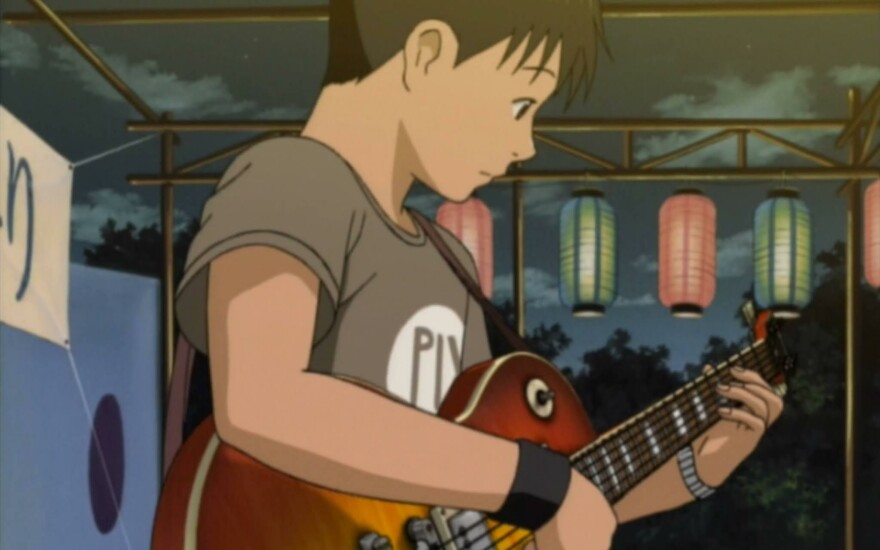 At 14-years-old, Yukio “Koyuki” Tanaka feels like he has no dreams, ambitions, or path in life. All of this changes when Koyuki saves a weird-looking dog named Beck that a group of kids was attacking.

Koyuki manages to return the dog to its owner, 16-year-old Ryuusyke “Ray” Minami, a former member of a once-popular rock band. Ray brings Koyuki back to his old band’s meeting place and shows off his skill on the guitar.

Finding love for rock culture, Koyuki becomes determined to learn how to play the guitar and help Ray create the best rock band in the world!

5. Kids on the Slope 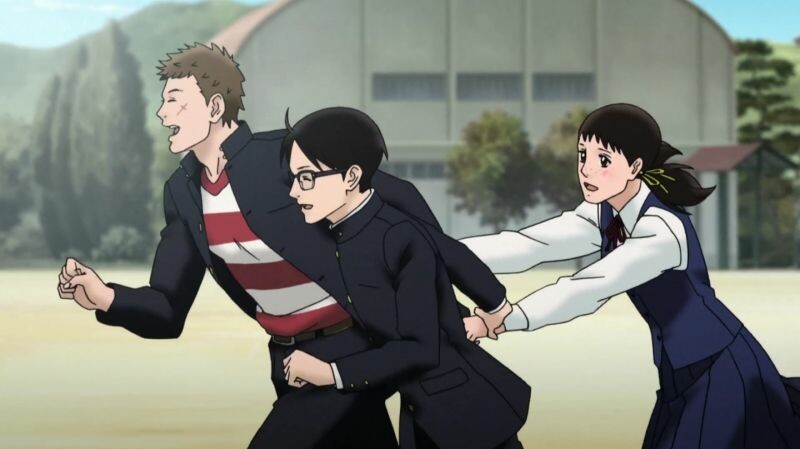 Having moved all his life, Kaoru Nishimi has never been able to fit in and make friends. This left the top student and pianist introverted and little hope that moving to Kyushu to live with his uncle for high school would make much of a difference. However, this all changes when Kaoru meets the charismatic delinquent and schoolmate Sentarou Kawabuchi.

Sentarou has a deep love for jazz music that draws Kaoru in to learn more. Before Kaoru knew it, Sentarou became his very first friend. Ritsuko Mukae becomes his second friend when she invites Kaoru to play piano in her family’s record shop.

With jazz music and new friends, Kaoru finds joy again in playing the piano and hopes their friendship and love for music can last forever. 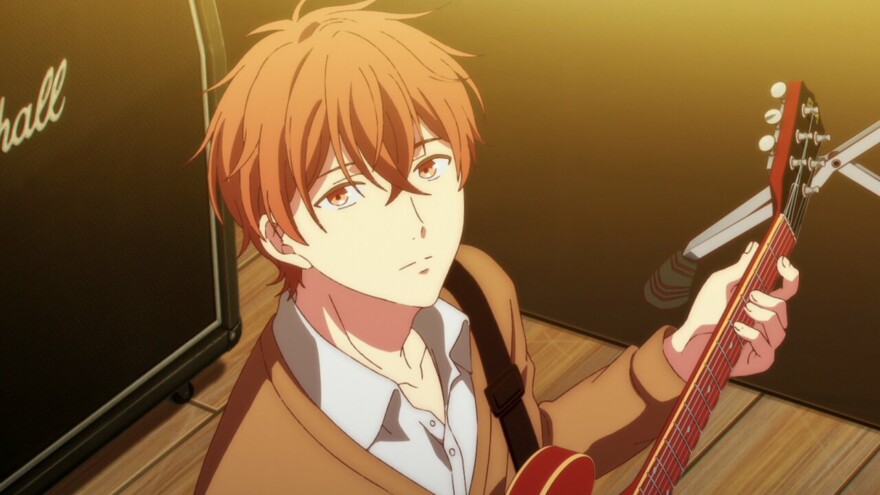 High schooler Ritsuka Uenoyama is in a small-time band with bassist Haruki Nakayama and drummer Akihiko Kaji, but never had a lead singer. Then, by chance, while in his school’s gymnasium, he sees a schoolmate sleeping on the staircase with a rusty Gibson guitar in his arms.

The classmate was Mafuyu Satou, who Ritsuka quickly scolded for not taking better care of the guitar. However, Mafuyu begs Ritsuka to fix his guitar and teach him how to play it instead of being embarrassed.

It turns out, Mafuyu is an incredible singer, and Ritsuka insists that he joins his band! But Ritsuka can’t help but wonder if Mafuyu can’t play guitar, why does he care one around with him? 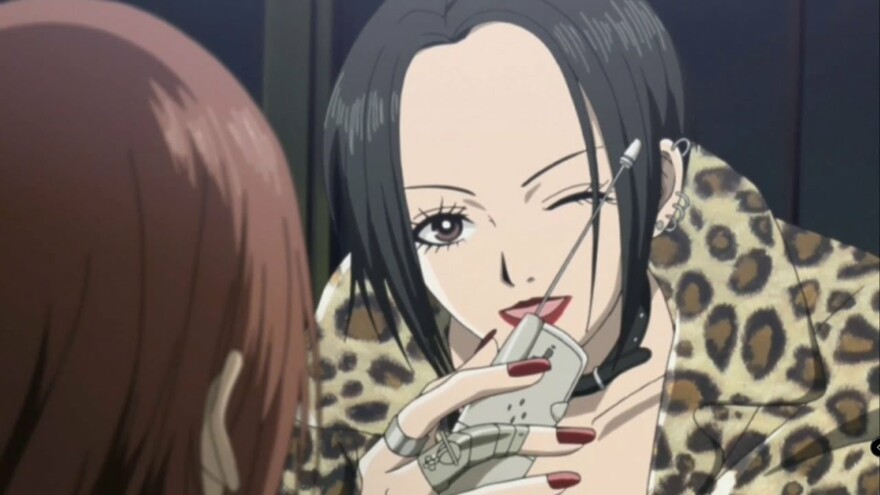 Traveling to Tokyo, two girls with the same name found themselves sitting side-by-side on a train that changed both of their lives forever. Yet, despite having the same, both girls are complete opposites.

Nana Osaki is a punk rock vocalist who ditches her band to pursue her dream of becoming a professional singer. Finally, Nana Komatsu is a sweet but naïve and clingy girl who falls in love too easily and follows her boyfriend all the way out to Tokyo.

Meeting each other, the two Nanas decide to become roommates and set out a wild chain of events that causes them to form a strong and unbreakable friendship. But with the harsh realities of music and love, can a friendship truly be unbreakable? 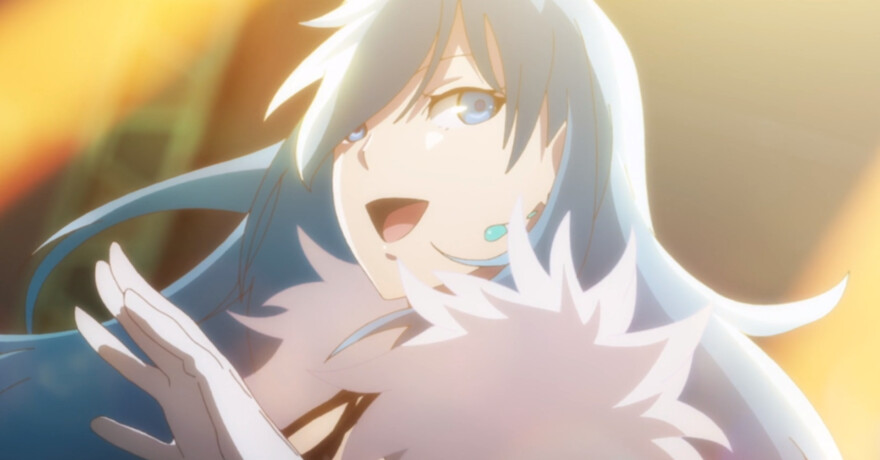 In the future, AIs live among humans with equal rights, but like most future dystopias, the AIs suddenly turn into humans and drench the world in human blood.

Hoping to save the future, the last of the humans send an AI named Matsumoto back 100 years to find the only AI that makes it to the future: the first AI ever made, an idol named Vivy.

Together with Matsumoto, Vivy has to change the sequences of events that allow AI to evolve and gain equal rights that resolve in them turning on mankind. Can Vivy stop the destructive future, or is the growth of AI inevitable?

1. Your Lie in April 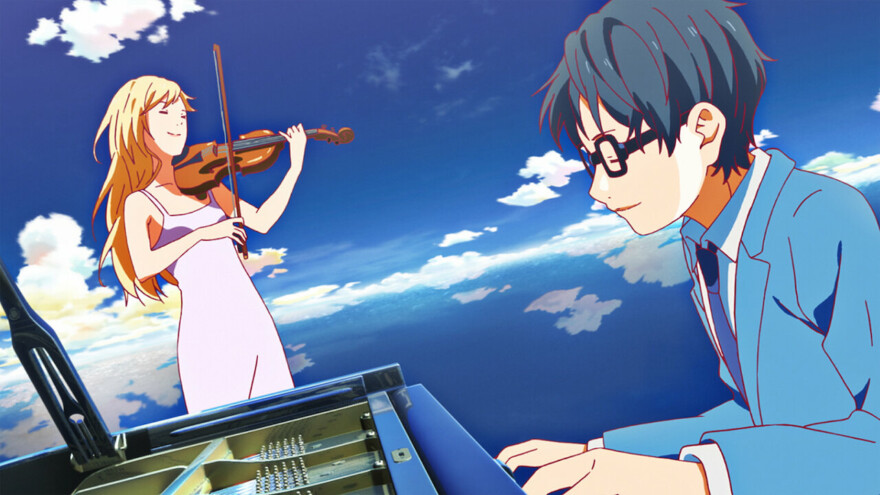 Kousei Arima was once a piano prodigy, but after the death of his mother, he lost the ability to hear the sound of the piano. Nevertheless, Kousei accepted this new monochrome life despite his friends’ protests.

Suddenly, the color would return to Kousei’s life one afternoon in April in the form of classmate Kaori Miyazono, a beautiful and talented violinist who is determined to drag Kousei back into the stage with her!

With Kaori by his side, can Kousei regard his love for music, or will he never be able to escape his past and shadows left by his mother?