Some of the best anime is when the characters’ feet aren’t planted on the ground but with their head in the clouds.

Even further than that! Swimming in deep space, fighting aliens, discovering new planets, or traveling through the stars in giant mechas, there is a chance for adventure that will push any human or alien to their limit whenever there’s other life beyond Earth. 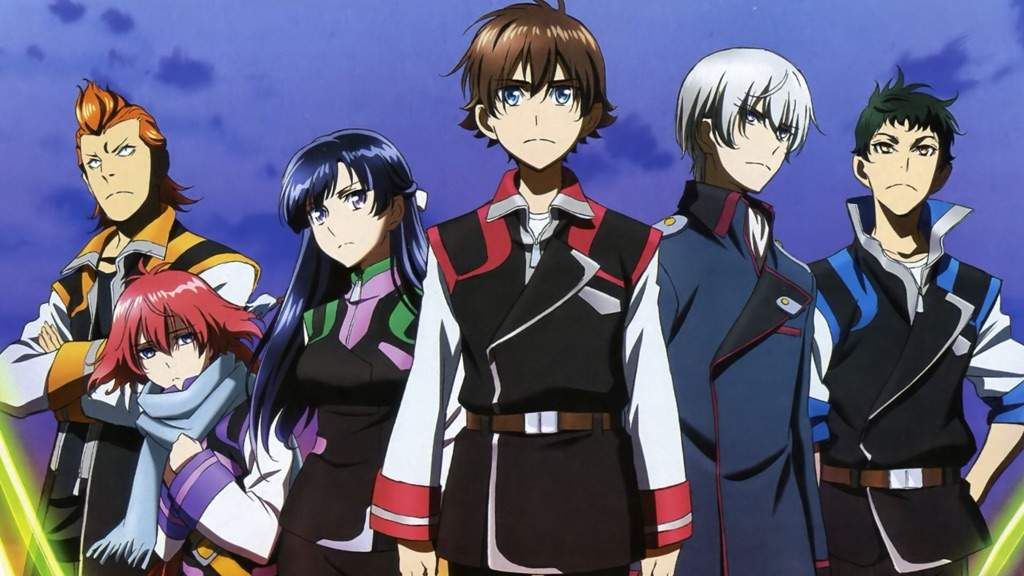 Humans have taken to outer space and, by 71st of the True Era, humanity has successfully created their own galactic cities. However, just because humans have made it to the stars doesn’t mean we’ve found peace among themselves.

Humans have broken off into two sides: the ARUS and Dorssia. On Earth and in space, humans are at world with each other.

In the middle of the war, a new faction is created in Japan and the Oceanian Islands known as JIOR to get out of the war and live in peace. 17-year-old Haruto Tokishima resides in Japan and only wants peace too, but Dorsia thinks differently.

They are after the Valvraves, powerful mechas hidden inside Haruto’s high school. To protect his friends and classmates, Haruto steps into one of the mechas. He can’t go back now—it’s up to him now to end the war. 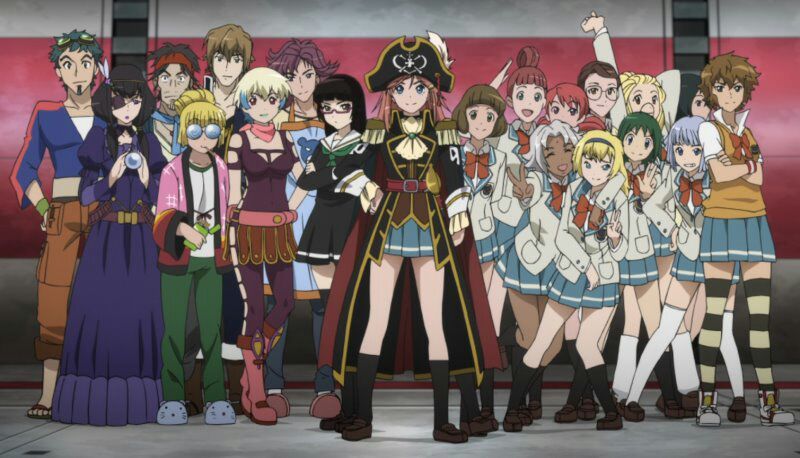 Marika Kato is a cheerful and charismatic high school girl who loves the Space Yacht Club and job at a retro-style café.

Everything changes for Marika when strangers show up who used work for her late-father and wants her to take over as captain of their space pirate ship.

Marika steps aboard the Bentenmaru to begin new life as a Space Pirate. Now Marika is a high school student, part-timer, and Space Pirate. Can Marika live up to her father’s legacy and win her new crewmates respect?

Middle school girl Hikaru Hoshina has always loved space and dreams of becoming an astronaut. Soon, she will be able to go to space but not as an astronaut…as a magical girl! A cute, fluffy alien named Fuwa pops out of Hikaru’s notebook of star constellations. “Twincool~☆”!

Fuwa isn’t alone, before long, aliens Lala Hagoromo and Prunce arrive in search of legendary warriors known as Precure to save the universe.

Turns out, Hikaru is a PreCure known as “Cure Star”! Now, Hikaru joins Lala and her friends to look for the rest of the missing Precure and try to awake the 12 Star Princesses to save the whole cosmos! 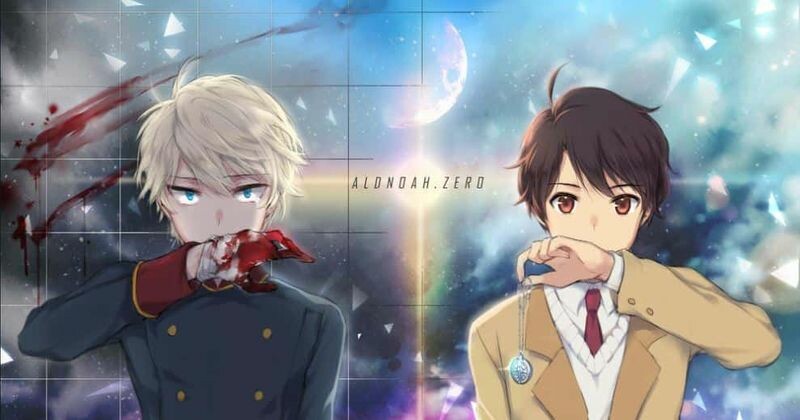 When humanity makes it to Mars, some stay behind and become known as “Terrans.” On Mars, they discover an unknown and powerful technology they call “Aldnoah” and separate themselves from Earth and become the Vers Empire of Mars.

A war breaks out against the two sides that end with the Moon being destroyed and a fragile truce being established.

Years later, the Princess of the Vers Empire travels to Earth to create a stronger peace but ends with her assassination. A avenge their Princess, a new war begins again, and the Martians plan to wipe out Terran forever.

The only thing that can stand against them is high schooler Inaho Kaizuka, a witness to the Princess’s death who is set out to finish what she started. 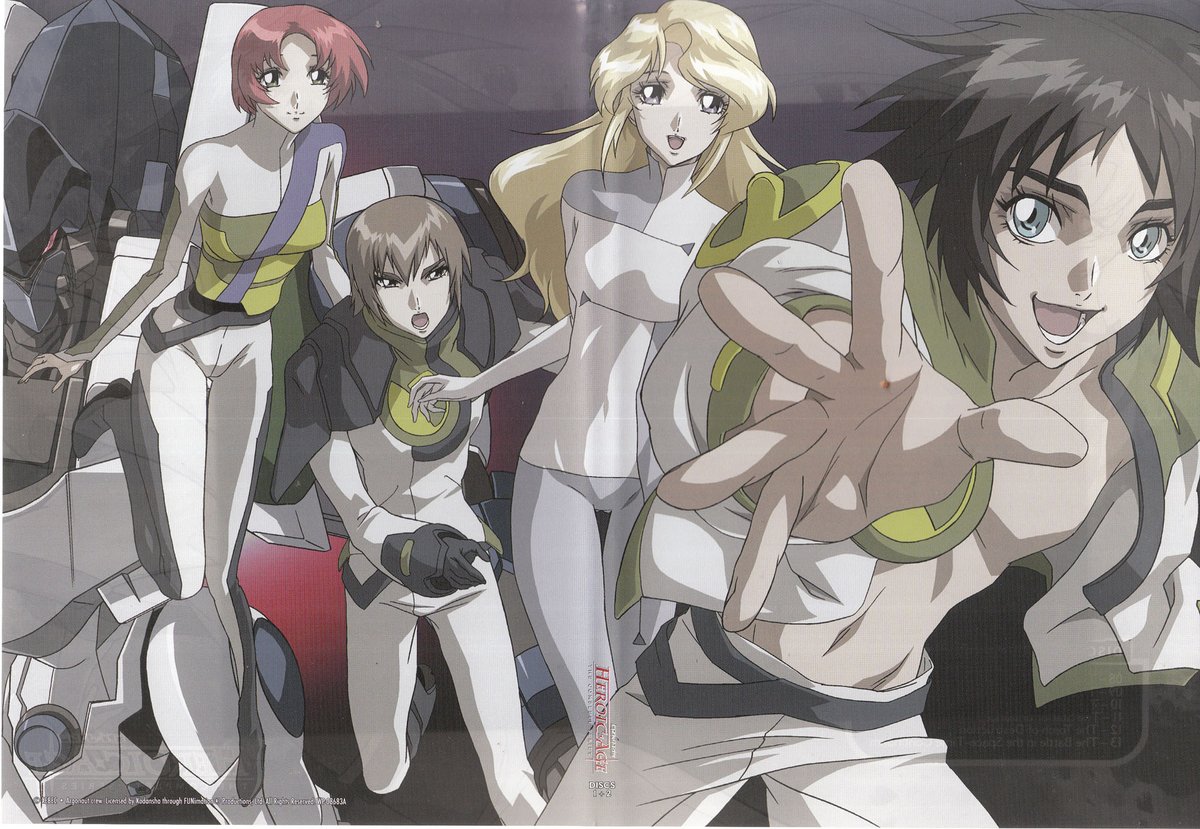 In a futuristic universe among the stars, the Golden Tribe has ruled it all. But when the Golden Tribes decide to leave and travel to new galaxies, they leave behind their knowledge to the Silver, Bronze, and Heroic Tribe.

Before the Golden Tribe leave, the fourth tribe of humans answer them and becomes known as the Iron Tribe.

Iron Tribe tries to endure against their more powerful and elite tribe brothers and sisters throughout the years. On the verge of extinction, Princess Deianeira follows the prophecy the Golden Tribe once spoke to save humanity—maybe even the whole universe! 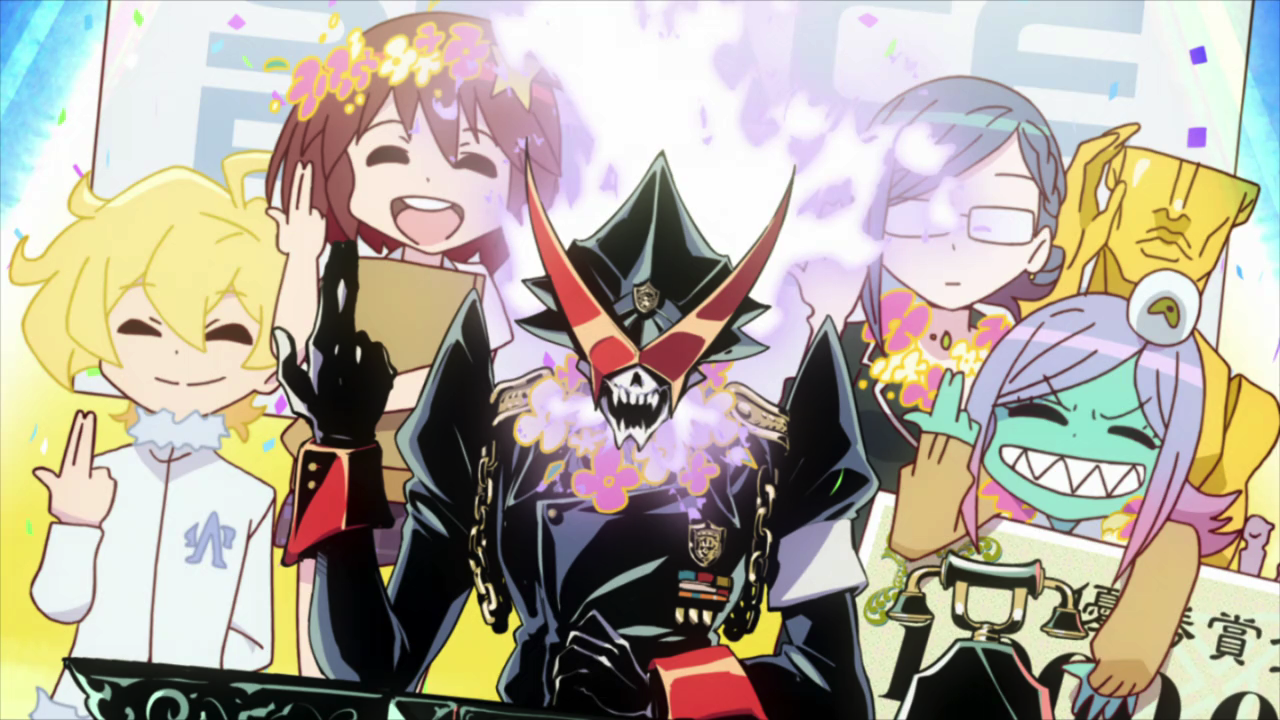 A small city in Japan, Ogikubo was sold and bought by aliens and became the only place in the world where humans and aliens live side-by-side. In this town is Luluco, who just wants to live in a normal city as a normal middle school girl. But no!

Her dad accidentally freezes himself and breaks to pieces, and when Luluco tries to call him in sick, she has to take over for him at the Space Patrol.

Being a normal girl with a normal school crush on a boy is a bit harder to handle when you’re tracking down criminals in her school with her Space Patrol uniform into her into a gun! 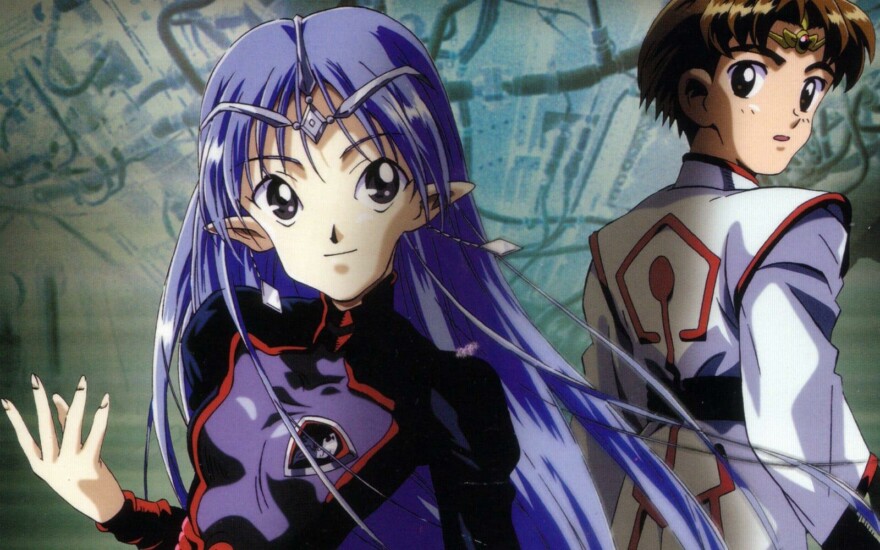 In a future dystopia, humankind is at the mercy of advanced humanoid with advanced technology known as the Abh Empire. To have a better standing in the Abh Empire, Jinto Linn’s father give up their land.

Now, Jinto is a count for the Empire and must learn to live like them, even pushing down his resentment for the race that conquered his people.

On his way to start at the Abh’s school, Jinto and Abriel, the Princess of Abh, get caught in the crossfire of a vicious battle between their people. To survive, Jinto and Abriel work together as they get wrapped up in the outbreak of war. 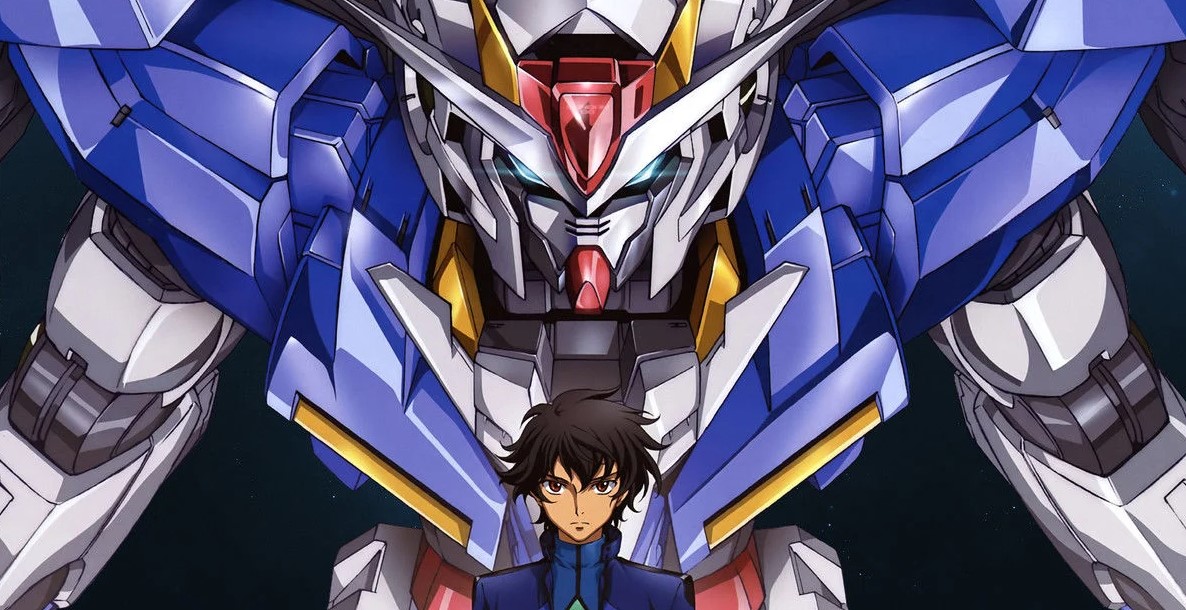 The year is 0079 in the Universal Century, some humans stayed on Earth as the Earth Federation, and the ones out in space are the Principality of Zeon. But there is no peace between the two. Zeon attacks the Earth Federation with powerful mechas called “mobile suits.” With these robots, they begin winning the war.

The tides begin to change when Zeon gets a taste of their own medicine when the Earth Federation creates their own mobile suits called the Gundam. Zeon attacks to destroy the mecha, and 15-year-old Amuro Ray ends up in control of the Gundam and at the center of the war and, hopefully, the solution. 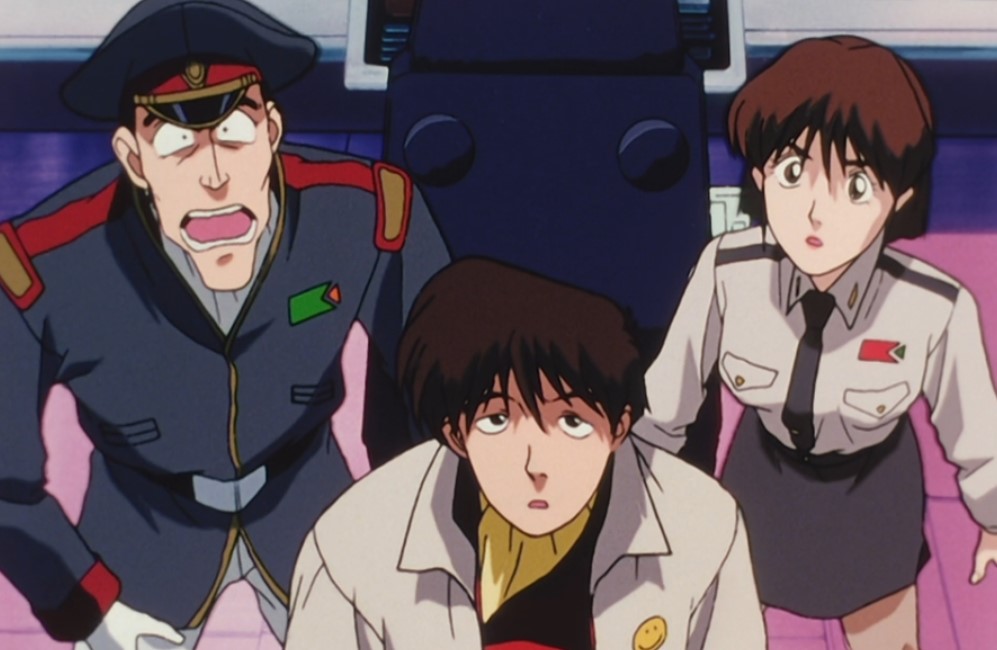 20-year-old Justy Ueki Tylor doesn’t have the greatest character. He is a womanizer and equally selfish and lazy. To have it easy, Tylor plans to get a job at the United Planets Space Force to get paid and stay away from combat.

Nothing goes as Tylor plans when he gets caught up in a hostage situation. By some miracle, Tylor saves the hostages and becomes promoted to commander of the space cruiser Soyokaze.

Now Tylor can’t afford to be lazy and irresponsible dealing with his new crew and unknown enemies they’ll encounter while traveling through the galaxy.

Dandy is an alien bounty hunter who only one job: search the universe and track down unclassified aliens and record them for rewards. If he’s going to hunt aliens, he is going to as “a dandy guy in space”!

With the help of his crew, a cat alien named Meow, and a robot vacuum called QT, they all hop aboard the Aloha Oe in search of rare aliens and, most of the time, get misadventures with other bizarre beings that make their job less than normal, baby! 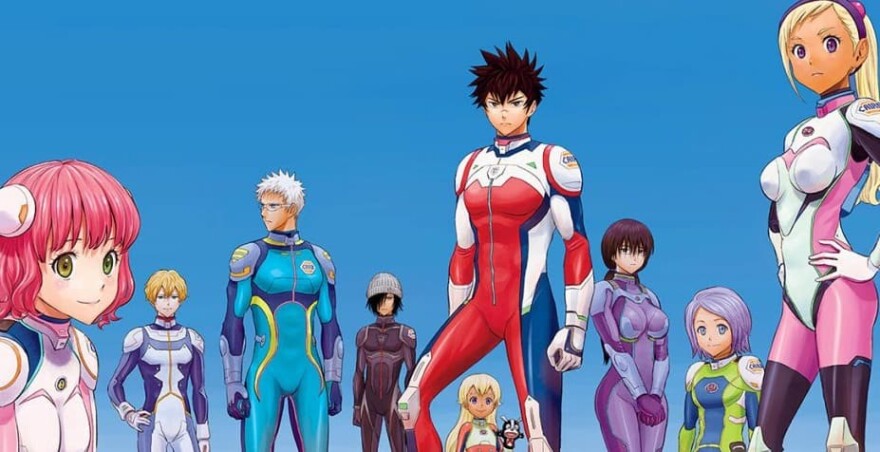 In 2063, space travel is a part of the normal, and 17-year-old Kanata Hoshijima is one of nine teenagers who are going to camp on another planet. What isn’t normal is a strange sphere suddenly appearing in front of the group and spitting them out into the infinite darkness of space.

Working together, they find an abandoned spaceship called the Astra and learn that camp is thousands of light-years away. To get there, the group travels from planet to planet to gather resources while trying to figure out the truth behind how they got trapped in space. 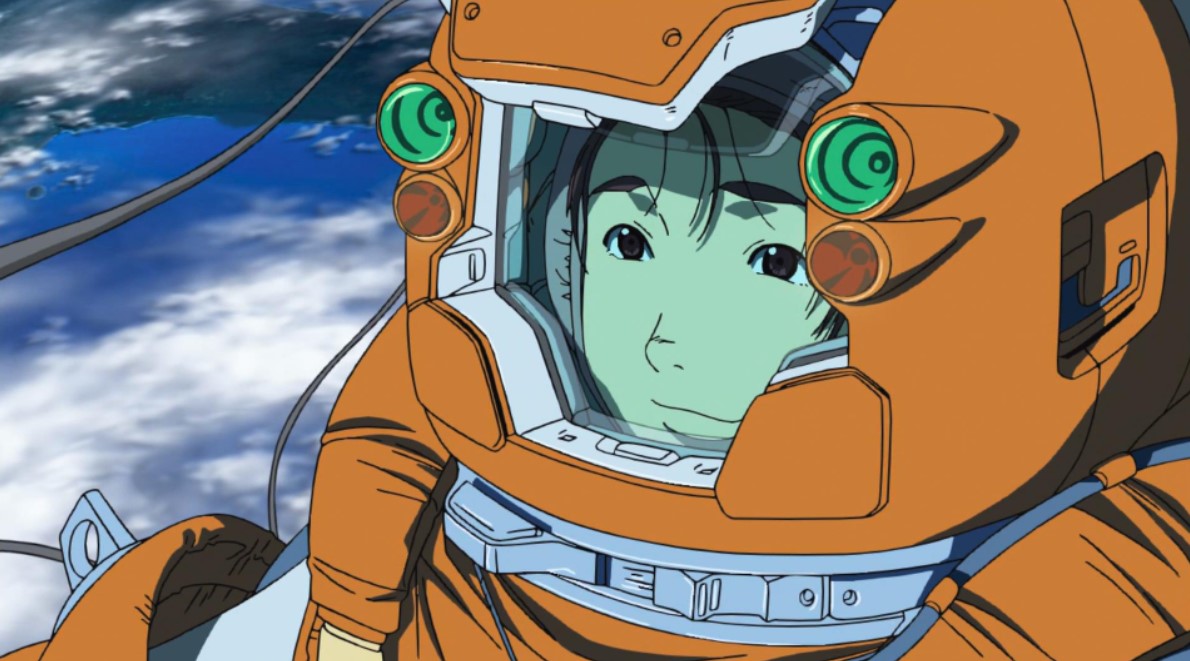 In the year 2075, 20-year-old Ai Tanabe dreams of going to space, and now her dream will become a reality as she becomes a member of the Debris Section of the Technora Corporation. She’s a waster collector in charge of removing space garbage swirling around the Earth and the Moon.

Ai takes pride in her work, but no one else shows the Debris Section with respect since they’re just understaffed and poorly paid garbage men.

But Ai doesn’t care and is excited to get to know her coworkers. Even in the beauty of outer space, there are everyday people, discrimination, and hope. 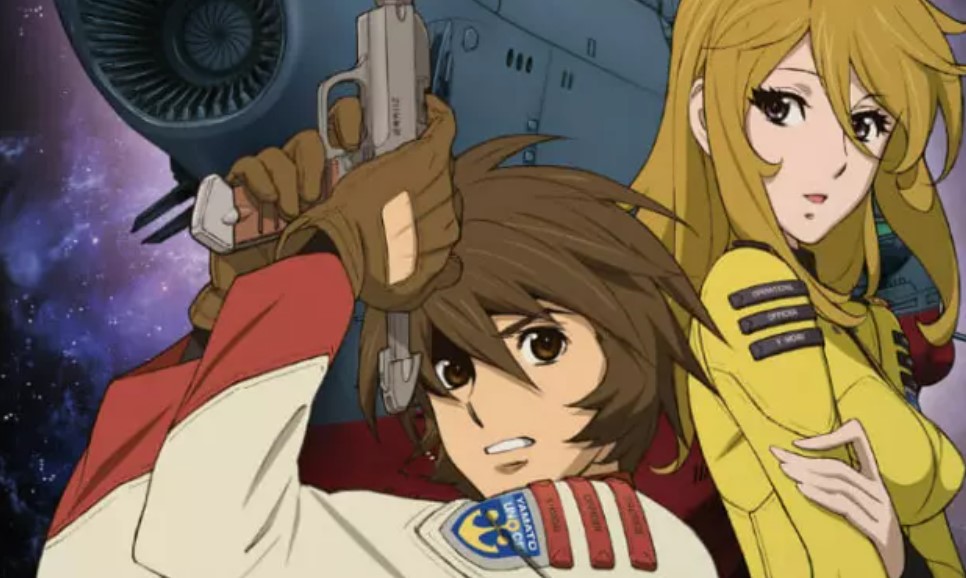 In 2199, Earth is destroyed by bombings from an alien race known as “Galias,” and mankind faces the threat of extinction.

There is a glimpse of hope when Earth receives a mysterious message from an unknown planet called Iscandar that offers humanity a way to save the Earth and win against the Gamilas Empire.

Earth sends Captain Juzo Okita alongside rookie officers Susumu Kodai and Daisuke Shima to get to Iscandar and return with their last chance of hope. Together, they get aboard the Space Battleship Yamato and set off to save humanity! 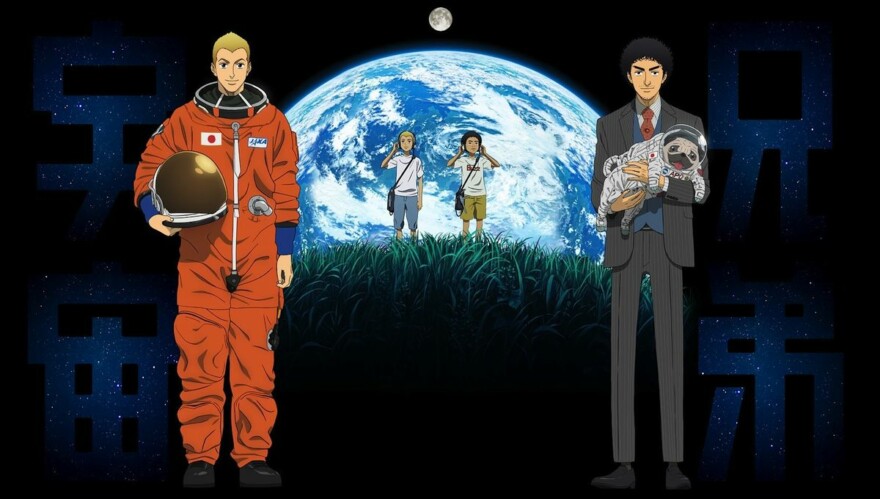 After seeing what they thought was a UFO, young brothers, Mutta and Hibito Nanba share the same dream to become astronauts. Youngest Hibito wants to make it to the Moon, eldest Mutta wants to be better and reach further: Mars.

By the time the two of them are adults, Hibito is on the way to achieving their dream and become the first Japanese man to travel to the Moon. Mutta, on the other hand, has hit rock bottom after losing his job.

All is not lost, Mutta has the chance to be an astronaut and catch up to Hibito and make their childhood dream a reality for the both of them.

In 2071, mankind has left Earth behind and has taken over a number of planets and moons. Inter Solar System Police work together with outlaw bounty hunters called “Cowboys to protect the peace.”

One of the teams hunting down bounties and getting their rewards is Spike Spiegel and Jet Black aboard the spaceship Bebop.

Alongside their unwanted new crew members consisting of a genetically intelligent Welsh Corgi, computer whiz kid, and femme fatale with amnesia, Spike and Jet go on thrills and adventures that reveal their true colors inner demons.

1. Legend of the Galactic Heroes 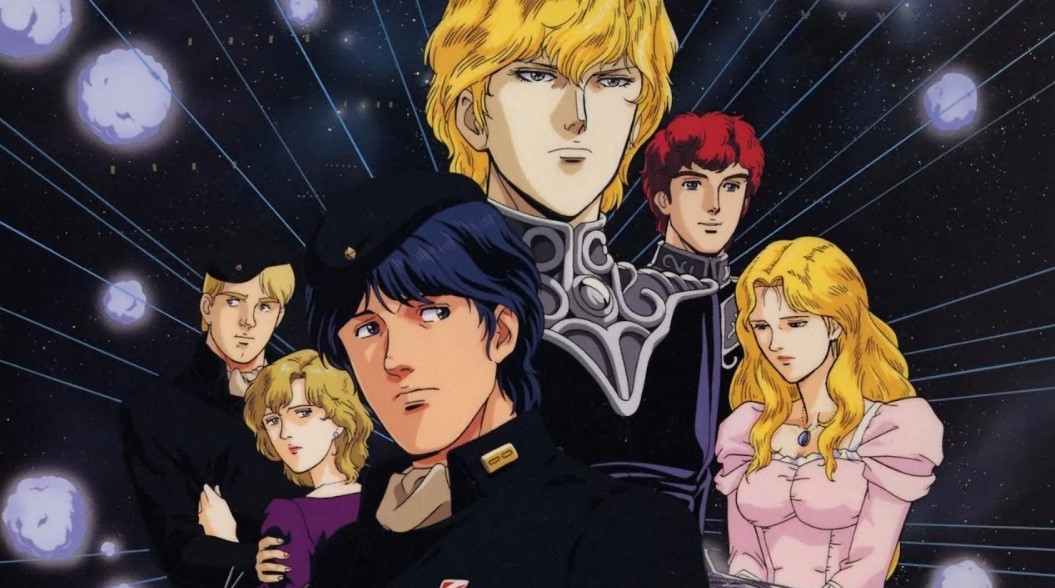 The Galactic Empire and the Free Planets Alliance have been at war with each other for 150 years.

It finally ends when new leader Reinhard von Lohengramm of the Galactic Empire and Yang Wenli of the FPA takeover. It’s a clash of warfare and idealism that makes the two sides question their morals and the point of the war.

Yang is a strong believer in self-governing and against dictatorship and shares his ideas with his pupil Julian Mintz.

On the other side, Reinhard wants mankind to be ruled over one and is trying to gain authority by moving up in the ranks of his Empire. More on the line for him is his sister’s safety at the hands of the Goldenbaum Dynasty.