Anime and colorful hair colors – it’s a duo a lot of us are familiar with by now. From spiky reds to verdant greens, you can name a random color, and there’s a high chance an anime character has that hair.

But we’re not here for crazy rainbow hair colors. We’re here to put the spotlight on white-haired anime boys! 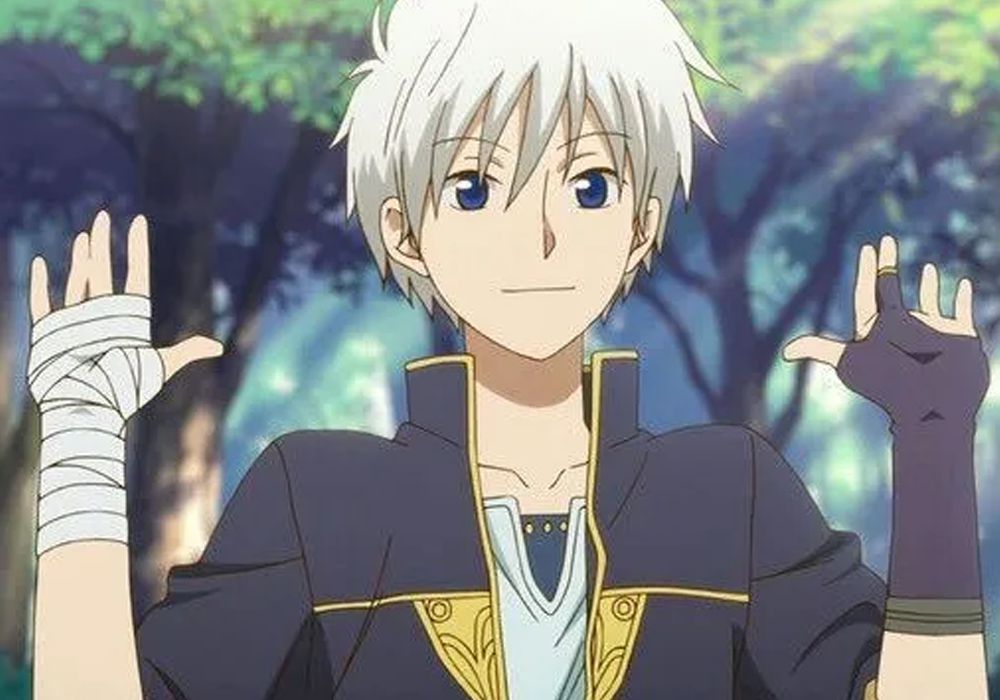 In this story, Snow White has red hair, and her prince has white hair instead!

Zen Wisteria is the second prince of the kingdom of Clarines. Unlike other royalty, he actually wants to secretly explore the kingdom while hiding his true status.

In one of his adventures, he meets Shirayuki, but their first meeting is a unique one. He gets the poison meant for Shirayuki!

Luckily, he has trained against all sorts of poisons due to his position and has gained an immunity to it.

That’s one way to meet your prince charming. 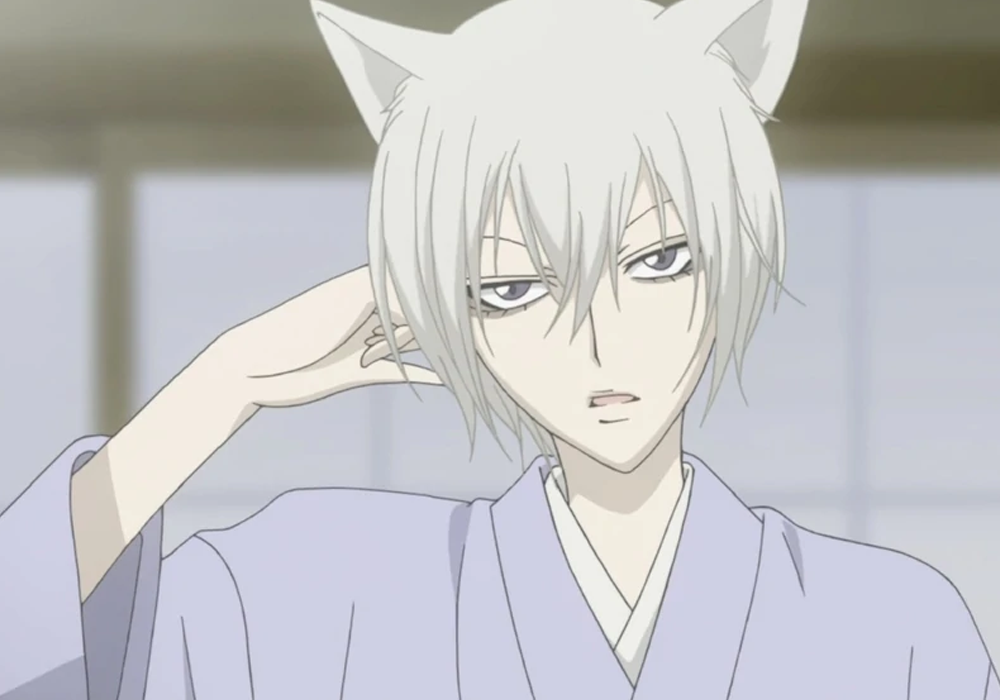 From royalty, let’s jump to the yokai world for this entry, shall we? Up next is Tomoe, the fox spirit from Kamisama Kiss!

Tomoe is abruptly abandoned by his master, but he eventually finds himself to be the familiar of the new Land God of Mikage Shrine – independent student Nanami Momozono!

At first, the two would butt heads due to Tomoe’s short temper and Nanami’s strong-headedness. Eventually, love blossomed between the two. 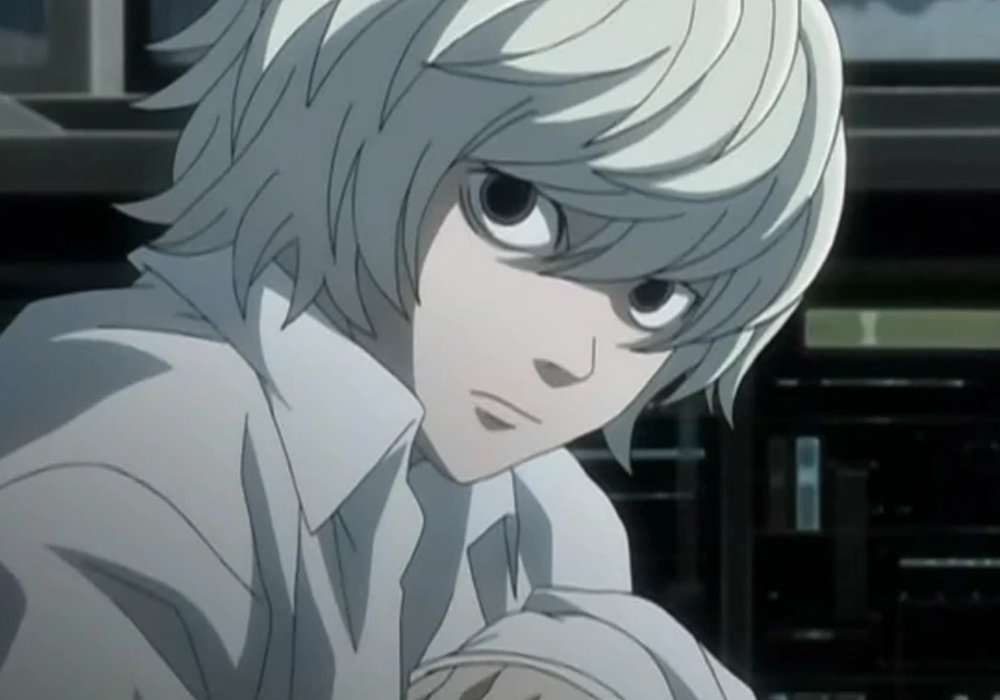 The younger L successor gets the 18th spot on our list. Here’s Near with his shaggy white hair and brain as excellent as L’s!

After L’s downfall, Near took over the case of Kira. Because he’s young, a lot of people would be doubtful about his skills and intelligence at first.

But Near has an obsession with solving puzzles and riddles, and you bet he’s very good at it. He can quickly show his prowess to remove any doubt from the naysayers.

The Kira case quickly became a puzzle he desperately wanted to solve. 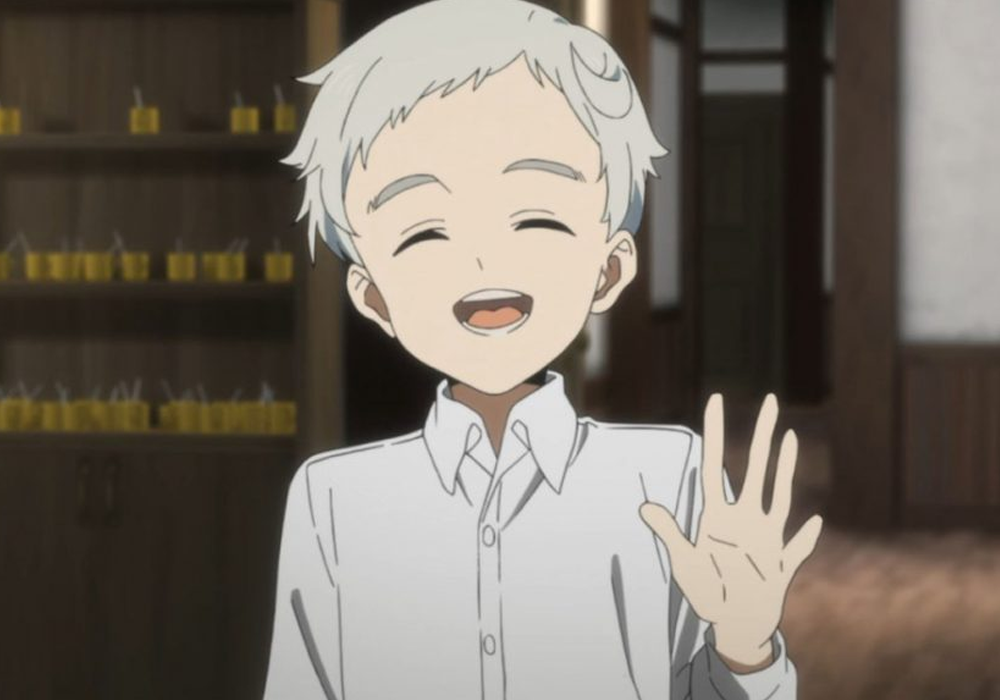 What Norman and the others thought was a safe haven was actually a lie. The orphans at Grace Field House quickly find out that their paradise isn’t what it seems.

Norman is considered as the smartest kid in the orphanage. Thanks to his intelligence, Norman helps plan their escape. White hair and genius-level wits? We’re seeing a pattern here.

But he’s not just smart, he’s selfless too. He would rather be in harm’s way just to let Emma, Ray, and the rest of the kids leave. 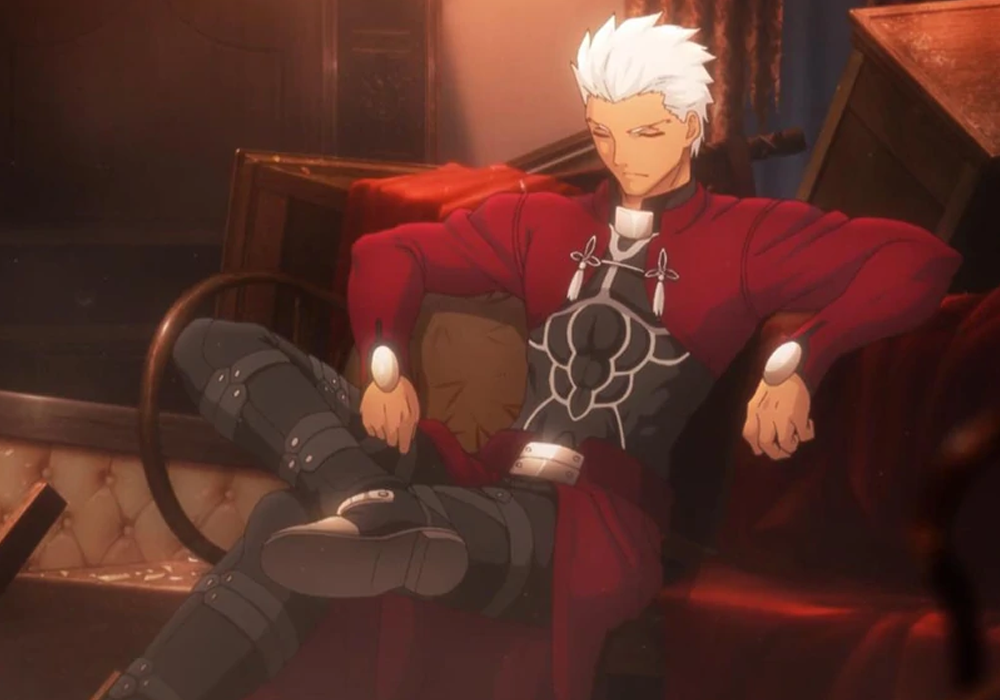 Archer is a Servant Class in the Fate series. During Fate/Stay Night or the Fifth Holy Grail War, Rin Tohsaka summoned him for the war.

His white hair is slicked back and goes well with his red outfit. This also matches with Rin Tohsaka’s red long-sleeved top.

Talk about outfit matching with your Archer Class Servant! 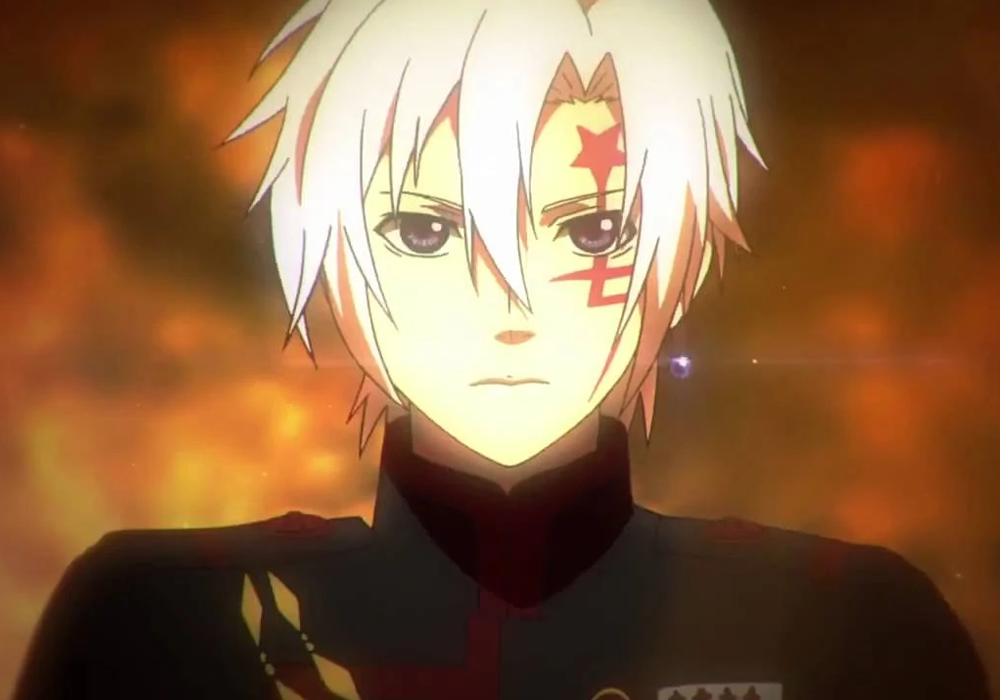 Up next, we have the Black Order Exorcist, Allen Walker!

Allen’s life is a tragic one. He’s kind and selfless, but behind that is a heart that suffered a lot.

He actually didn’t have white hair at first, and his personality was wildly different. His hair was red, and he was a brash kid. Due to the abuse he suffered, it affected the way he acted.

Thanks to the kindness shown to him, he changed his ways. The trauma and sadness he went through also changed his red hair to white. 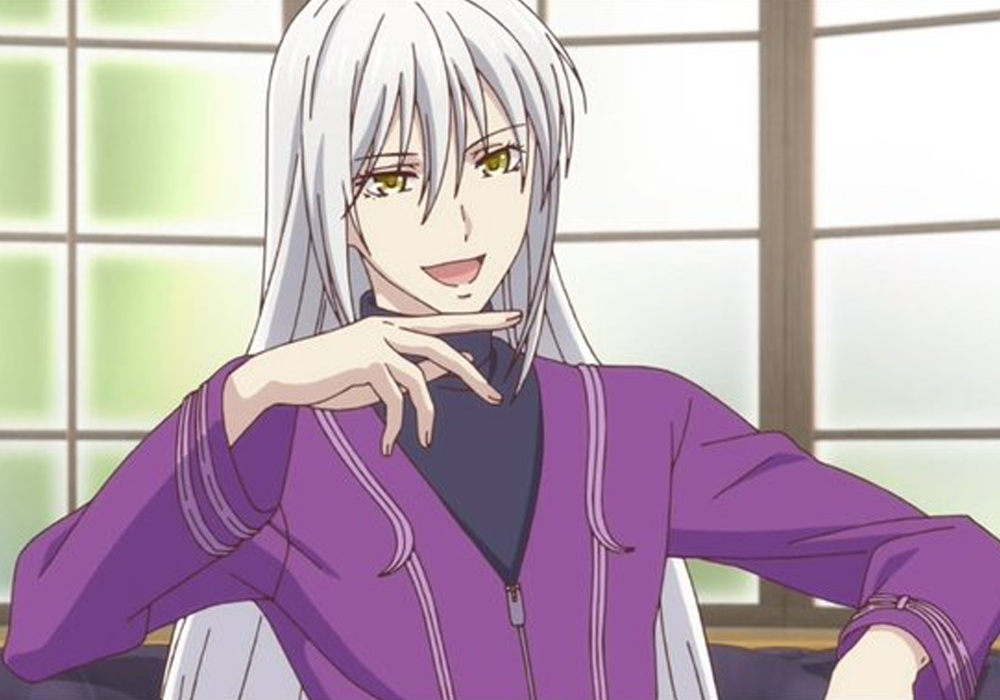 Slithering in our list, we have the Snake Zodiac Ayame for this entry!

Because of the Sohma curse, Ayame is cursed to transform into a snake whenever hugged by women or when subjected to extreme heat or cold. He would even turn into a snake to snuggle in your clothes!

Ayame is quite flamboyant. He has a shop named after himself that sells frilly clothes. Flaunt that handsomeness, Ayame! 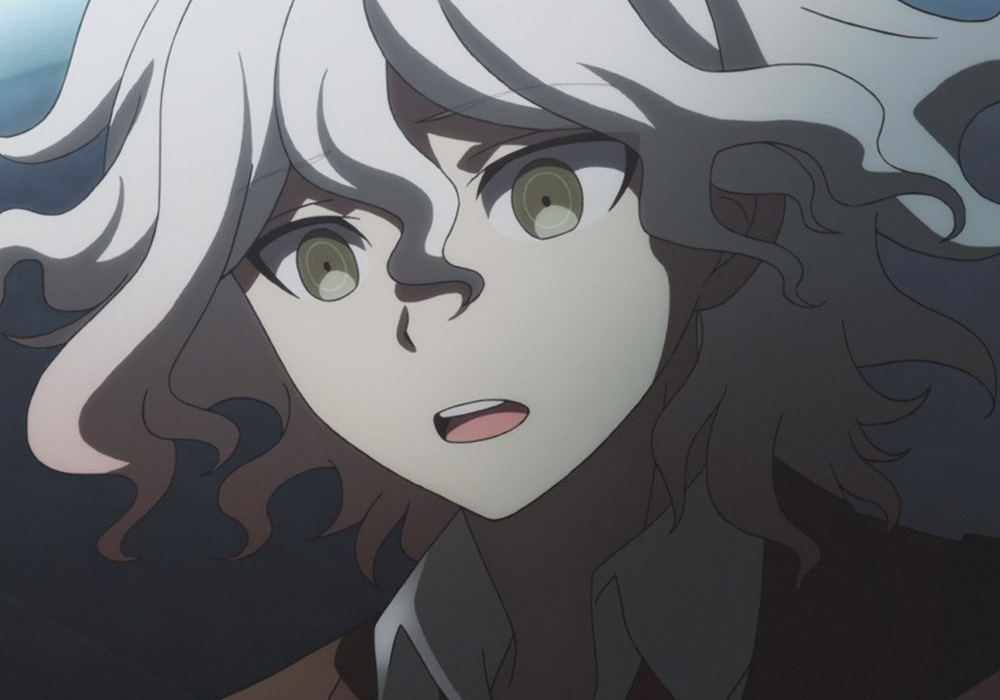 Let Komaeda and his shaggy white hair fill you with hope!

Danganronpa is a series filled with despair. Murder, mysteries, and secrets? Sometimes it just feels too much!

But Komaeda has an unwavering sense of hope. A lot of times, his reaction is a bit too much! When rambling about hope, he gets sweaty, his eyes darken and swirl, his face gets a very blissful expression, and just zones out.

No wonder his hair seems kind of crazy. Still, between despair and hope, the latter is a better choice. 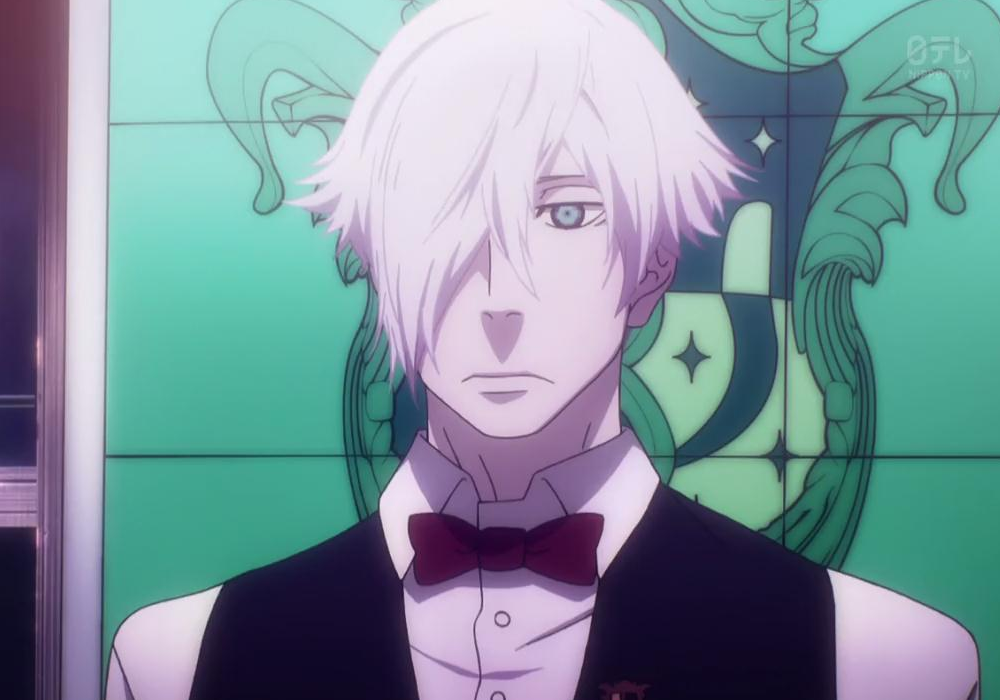 This stoic and calm bartender is as mysterious as his white hair.

Decim is a bartender at an afterlife bar called Quindecim. He’s an arbiter for the dead, especially for souls who have died at the same time. 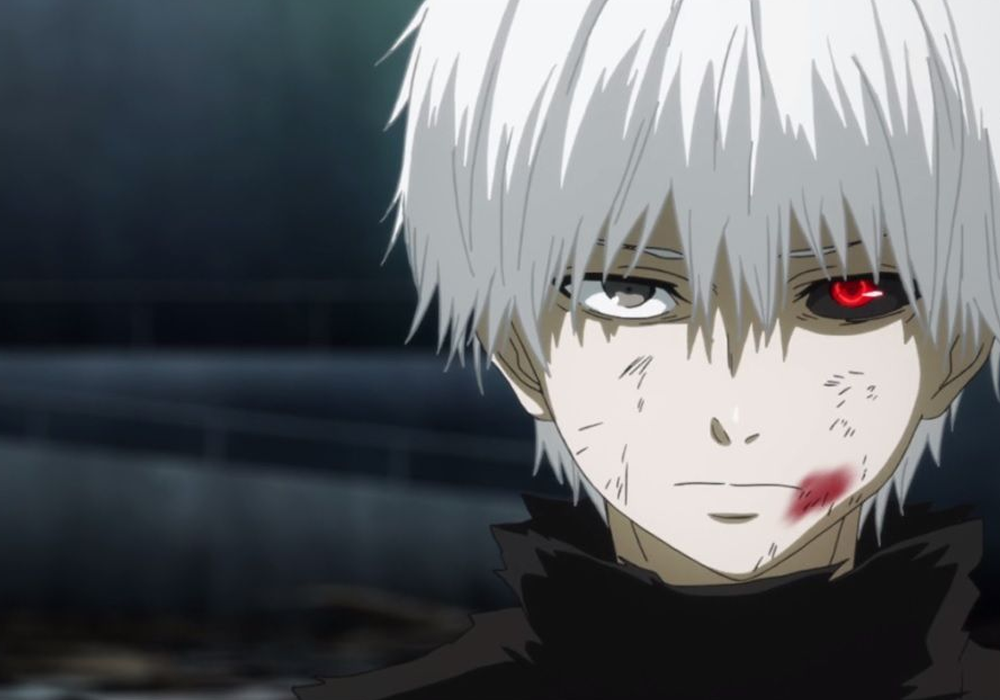 Our next entry can be quite ghoulish.

Ken Kaneki was an ordinary student living an ordinary life. His world gets upended when a kakuhou, or a ghoul’s organ, gets transplanted in him, turning him into a one-eyed ghoul.

He actually started out with black hair but got tortured so much that he underwent a transformation. His hair turned completely white, and his nails became black. 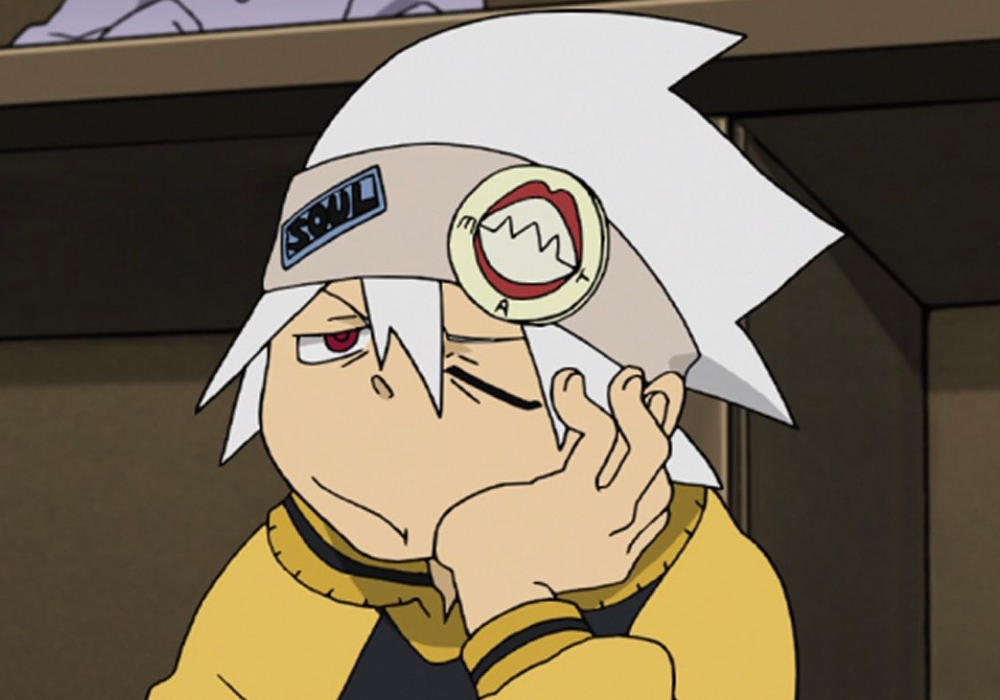 Time for the demon scythe weapon to take the stage. Up next is Soul Evans!

Soul’s chill and laid-back attitude matches with his side-swept white hair. Since he’s a demon weapon, he’s a human who can transform into a weapon.

His wielder or meister is Maka. And although they bicker a lot, especially when Soul gets a bit brash and tries hard to be cool, the duo cares a lot about each other and their partnership. 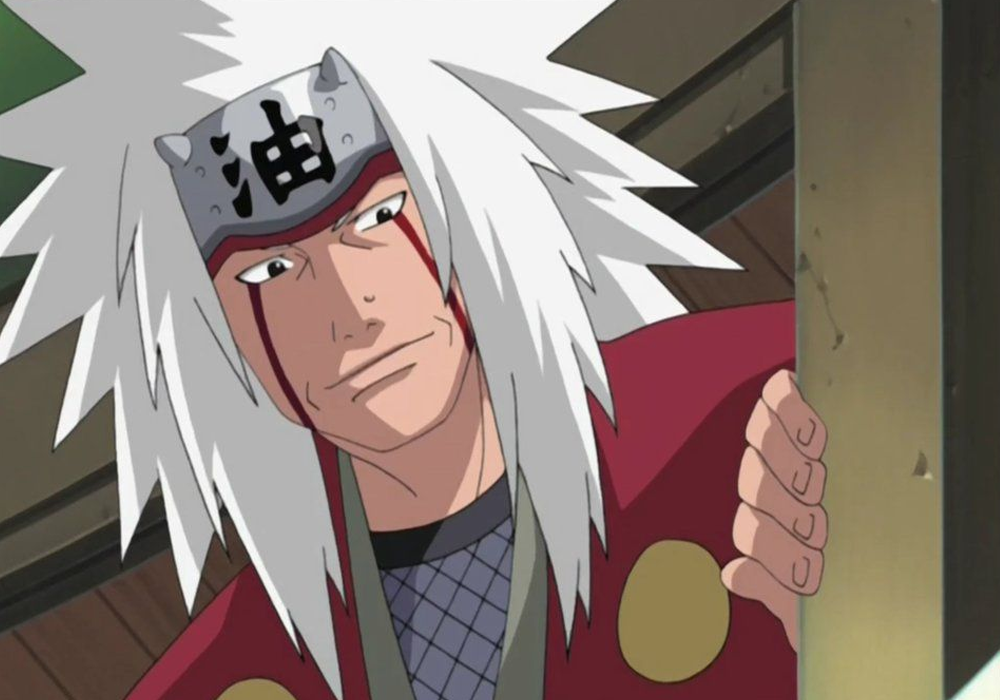 Make way for the famed Toad Sage! With his spiky white hair, Sannin reputation, and boisterous personality, we definitely didn’t want to skip Jiraiya in this list.

Jiraiya is a legendary shinobi in the series. His master was the Third Hokage, one of his students became the Fourth Hokage, he became a part of the Legendary Sannin, and he trained Naruto.

His white hair is quite wild, spiky, and long. To keep it in place, he ties it in a ponytail and pushes the forehead part with his horned forehead protector. 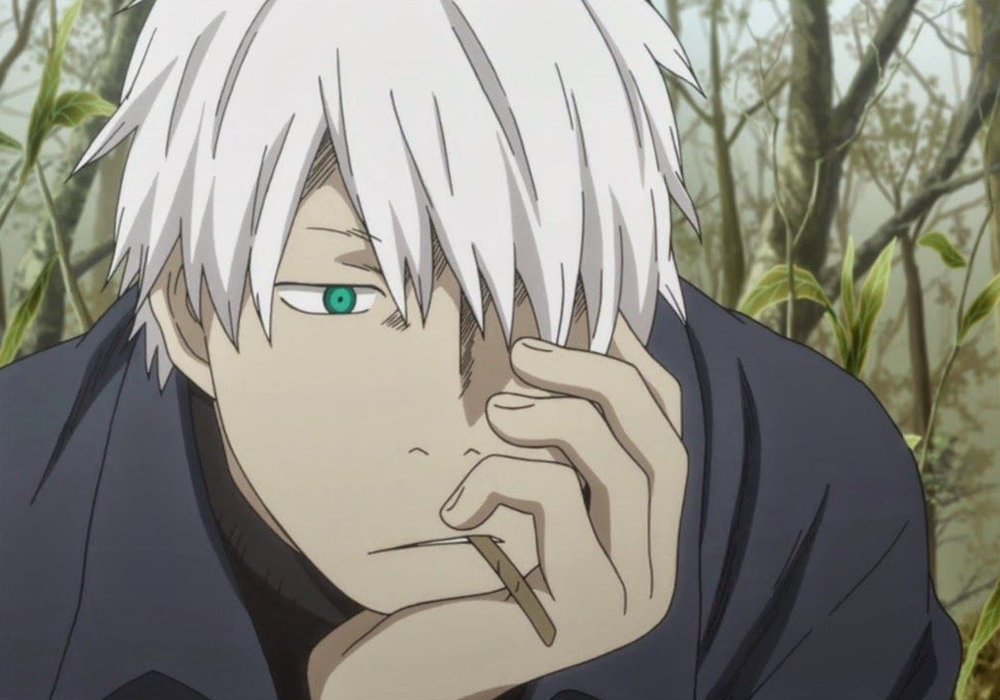 Wandering the lands to learn more about Mushi and help people with their Mushi-related predicaments, Ginko is quite a mysterious character!

Just like other characters in this list, Ginko used to have black hair when he was a child. Due to his interaction with a certain Mushi, his hair became white, and he had to sacrifice his eye.

Since then, his white hair has covered his right eye. 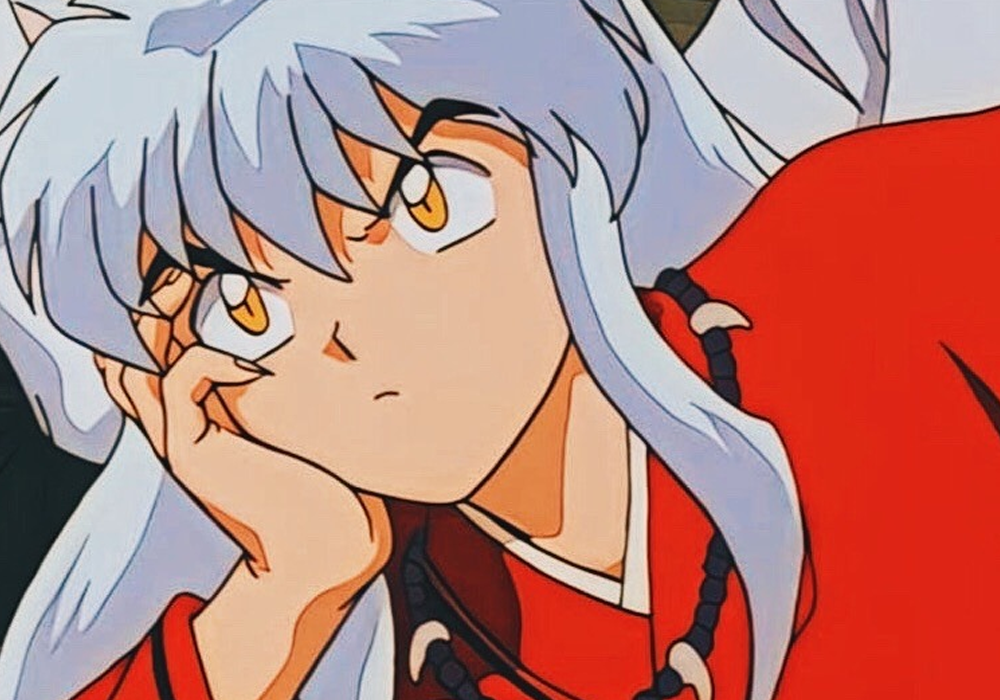 You better sit down for this entry! Up next is the dog-like half-demon Inuyasha.

Inuyasha’s demon history is bittersweet. Despite the circumstances, his human mother and demon father fell in love with each other.

Their forbidden love eventually caused their demise, but they bore a lovely son – Inuyasha. Inuyasha gets his white hair from his dad.

Sadly, in his quest to become a full demon, Inuyasha fell into a trap that broke Kikyo’s heart and made him cursed to a tree. 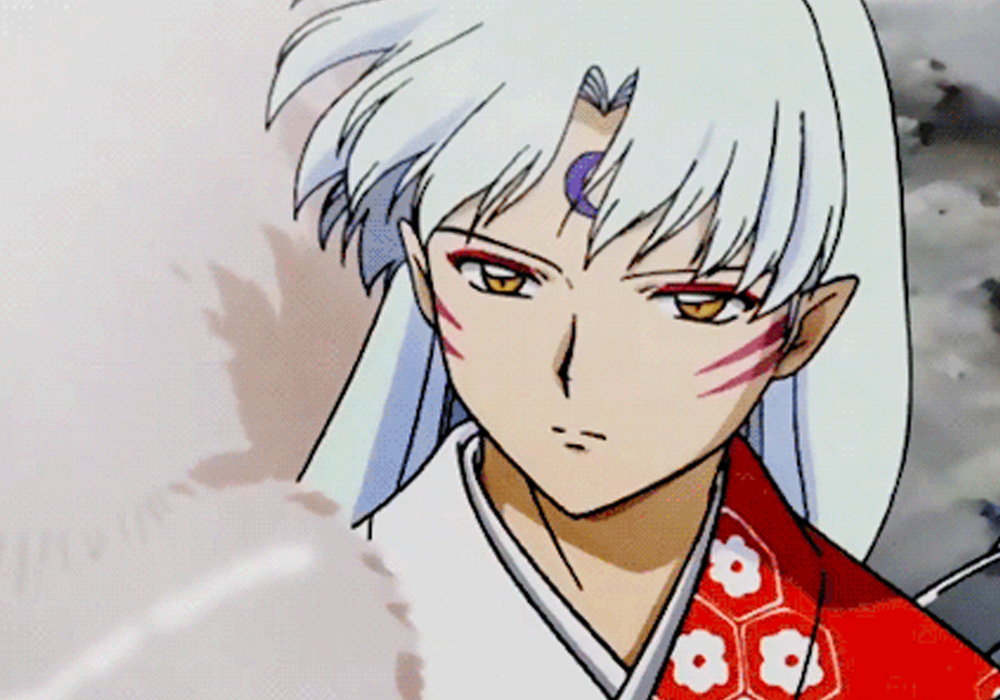 In a list of white-haired anime dudes, we can’t exclude Inuyasha’s bro, Sesshomaru!

Sesshomaru is Inuyasha’s paternal half-brother. He’s also an inu daiyokai like his father, but a full one, unlike Inuyasha due to Sesshomaru’s inu daiyokai mother.

While he has a human form, his true yokai form is a huge and fearsome white-haired dog.

Throughout the series, Sesshomaru isn’t exactly buddies with Inuyasha’s group, but their goals are the same. He wants to defeat Naraku for his own reasons. 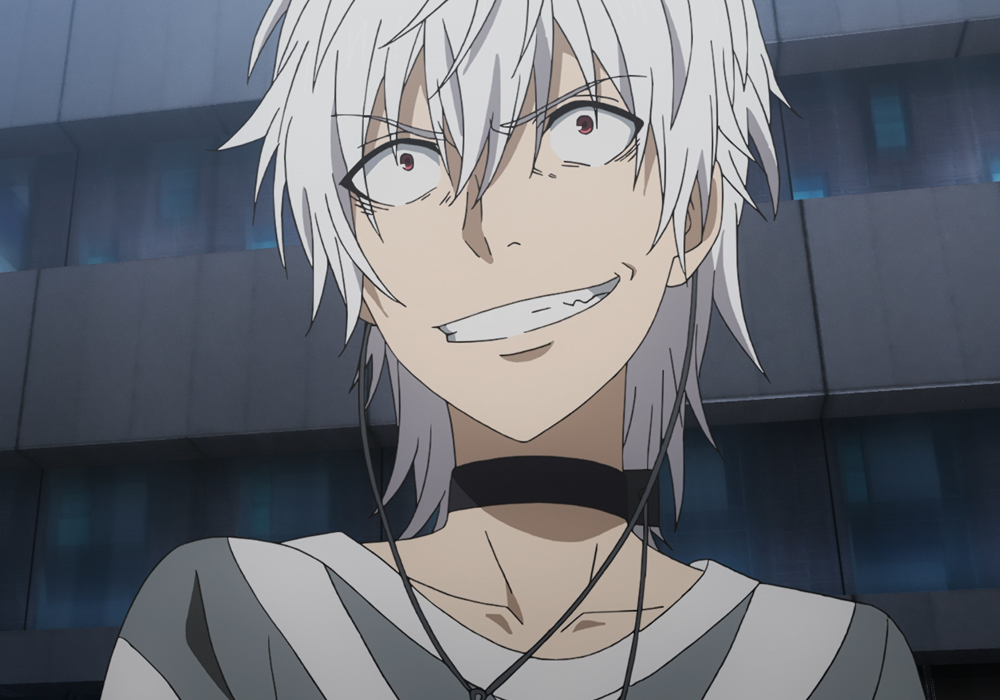 It’s physics time! With his vector manipulation powers, Accelerator shoots up high in our list.

Accelerator is considered one of the strongest espers in the story. His powers can control vectors and manipulate any object with vectors.

Redirect a bullet? Sure. Cause an earthquake? No problem. Accelerate his body to reach inhuman speed? The sky’s the limit for Accelerator.

Actually, his limit is his calculating prowess and science itself. If you can go around his attacks with science or make him unable to calculate, then this almost unstoppable esper can be counterattacked. 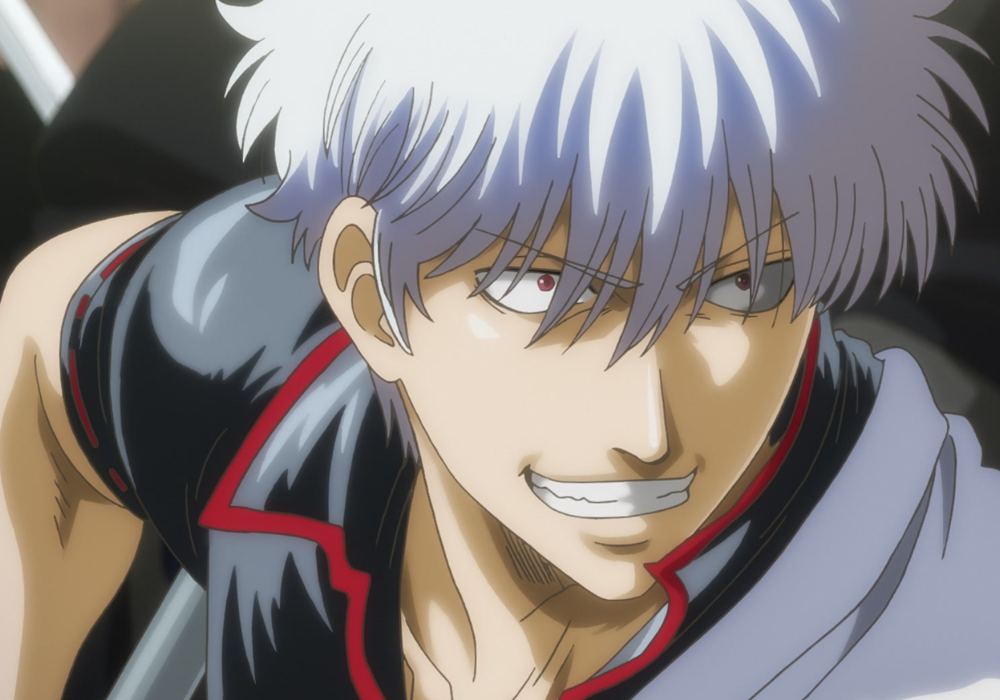 White-haired anime guys? We must let the president and founder of Yorozuya have an esteemed spot in our list!

To summarize this guy, Gintoki is a goofy man – a goofy, lazy, silly man. He might be a skilled samurai, but he’d rather lounge his days away reading Shounen Jump.

His white-bluish hair can cause him some agony sometimes. It’s perpetually messy and frizzy, much to his distress. And with extreme heat, it can even turn into an afro!

While Gintama can dish out the funnies, it knows how to pull the heartstrings as well, especially when it comes to Gintoki’s past. Better ready some tissues when watching. 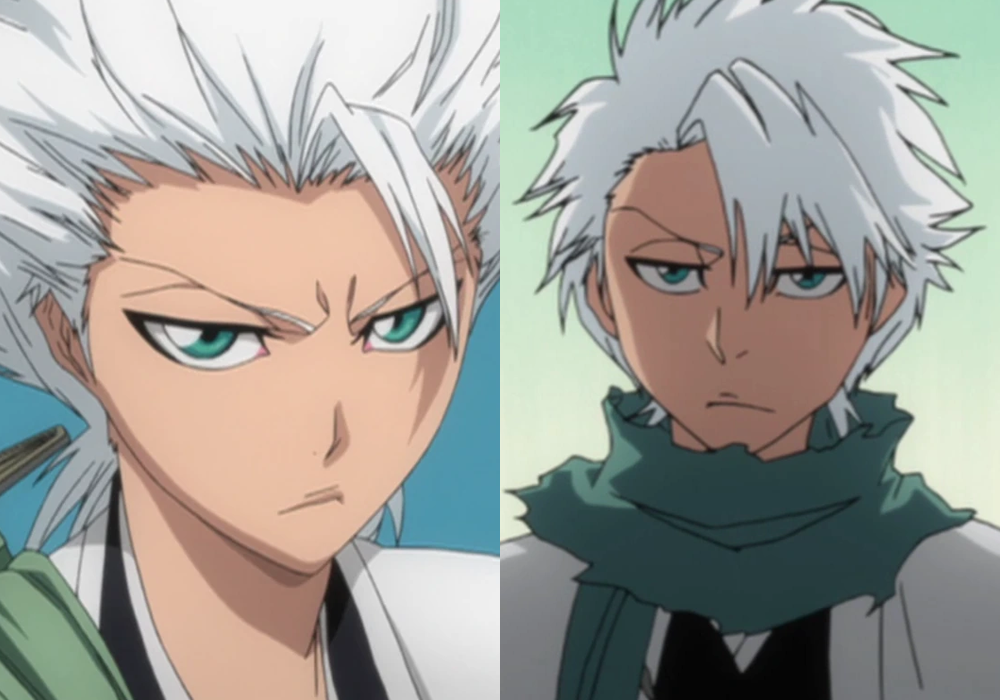 Don’t underestimate this chibi captain and his icy hair. He might be tiny, but he packs quite the cold punch, both in the Shinigami Captain department and in anime hairdos.

When it comes to Shinigami skills, Hitsugaya is considered a gifted prodigy in Soul Society. He’s the youngest to become a captain to date and is also blessed with high intellect.

His white hair is spiky and defies gravity – or maybe it’s just frozen like that. Later in the story, and as he ages, he lets his hair down. 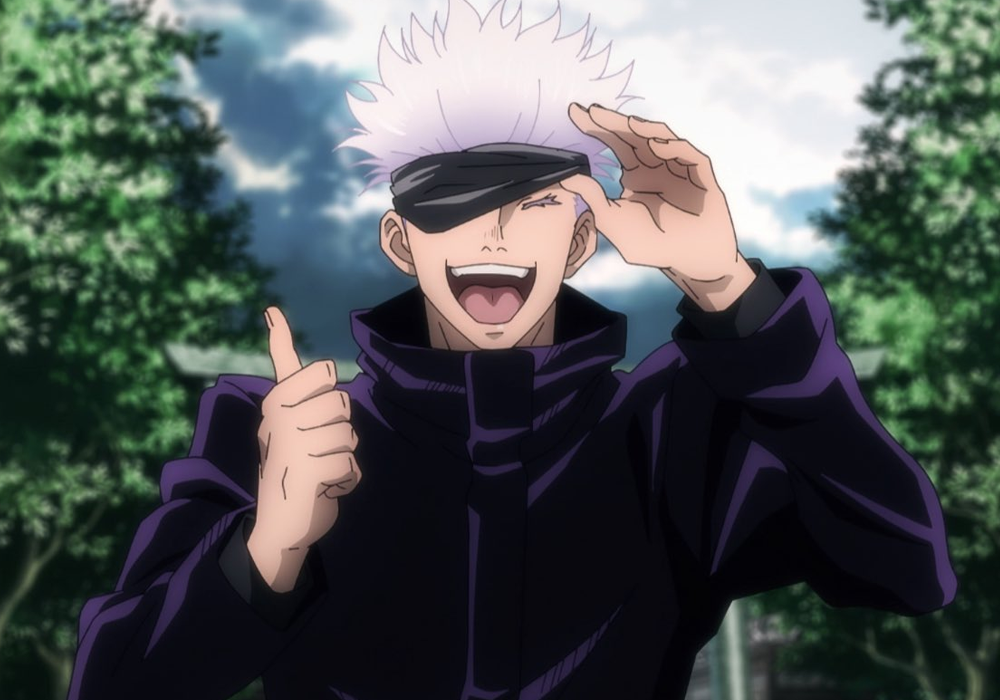 With his Limitless and Six Eyes, Satoru is considered as the strongest and most-skilled sorcerer in the show. He’s usually upbeat and happy-go-lucky, but you can definitely tell he has an air of mysteriousness about him.

He usually covers his eyes with a black blindfold, which seems to help hold up his hair as well. 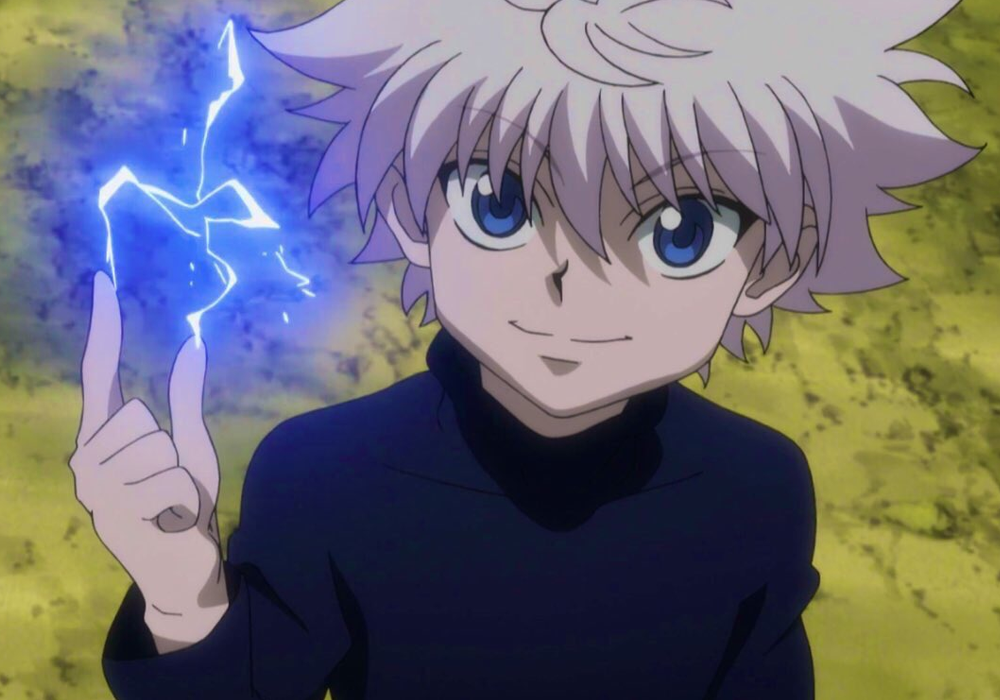 And our top white-haired anime boy is none other than Killua Zoldyck!

Having left his assassin family and wanting to find something for himself, Killua started off as a brash and seemingly directionless kid.

But thanks to the friendship that Gon extended to him, Killua has grown as a character.

He is fiercely protective of his friends and loved ones and will risk it all just to save them. This is strongly shown when he tries to find a cure for Gon and bails out his sibling Alluka.

Like some of his family members, particularly his grandfather, Killua’s hair is silvery-white.