Anime can get really crazy with hair colors. From cotton candy pink to ocean blue shades, characters from just a single show can easily fill the color wheel in no time.

But today, let’s take a break from the crazy colors and give this moment to white haired anime girls. We’ve curated the best female anime characters with white hair.

Girls, time let your hair down! 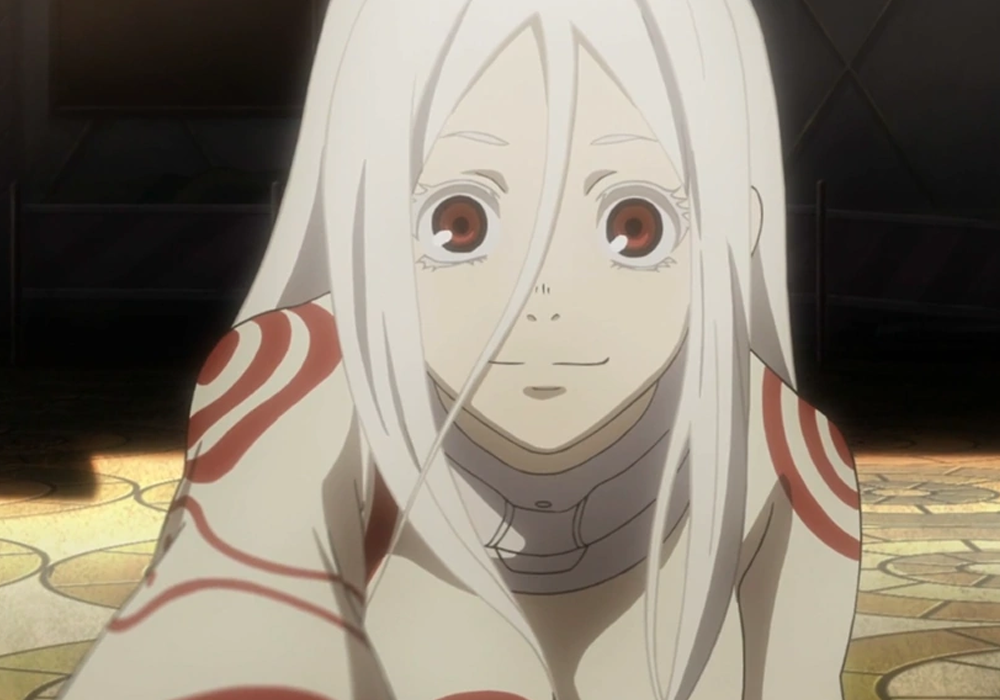 Let’s start this list with the appropriately named Shiro from Deadman Wonderland.

Shiro is an albino girl who exudes mysteriousness, albeit her upbeat and innocent personality.

She has long white hair that goes all the way down to her knees. Because of her albinism, she also has white eyelashes and red eyes.

In the story, Shiro shows a mysterious connection to Ganta. Despite her cheerfulness and love for sweets, there is something sinister with her aura. Still, she tries her best to protect and help Ganta. 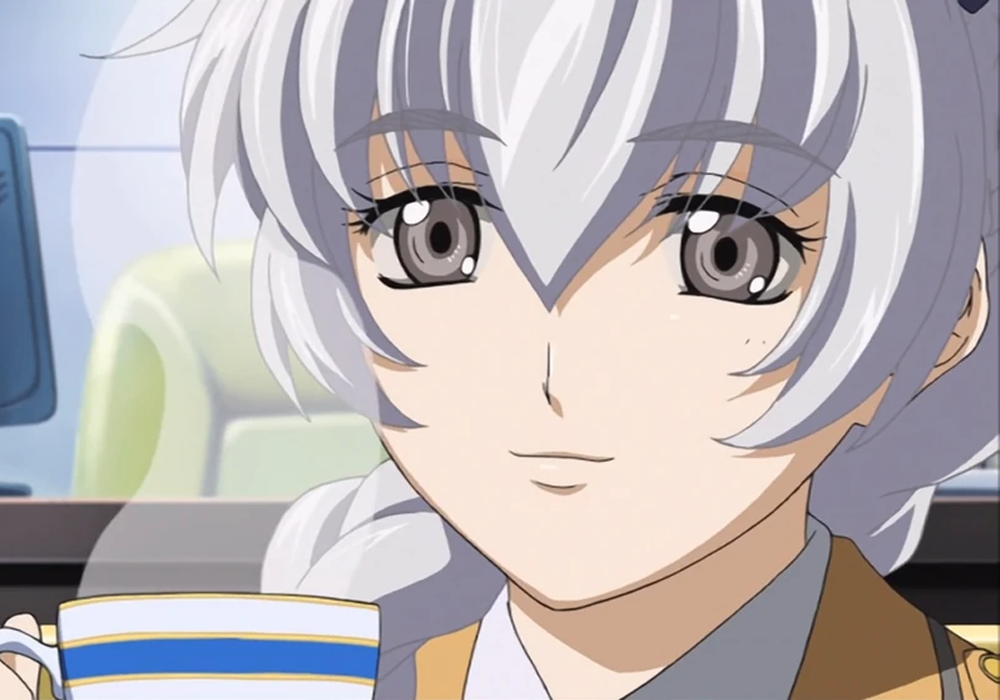 Next up is the commanding officer and child prodigy of Mithril, Teletha Testarossa!

Teletha is an American character in Full Metal Panic. Due to her intelligence in mathematics and science, she was considered a child prodigy and became a captain by the age of 16!

But because of her role in this private anti-terrorist military organization, she has lived her whole life in military bases and submarines.

Teletha wears her white hair in a braid. She puts it up in a high ponytail with a blue bow and then braids it. 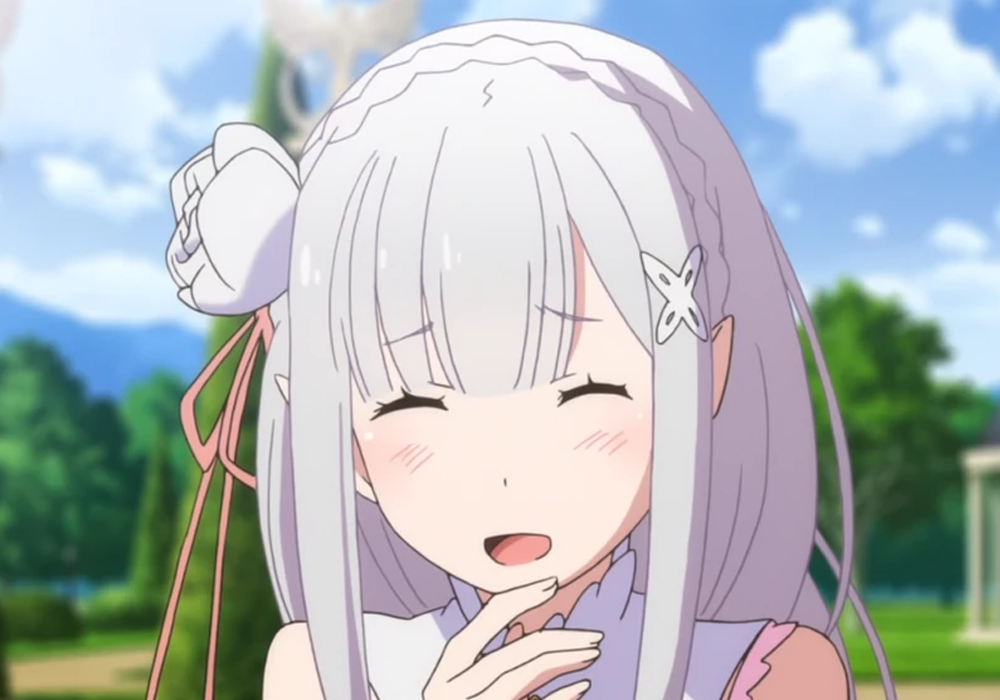 Yep, we love Emilia and her white hair here too!

Emilia is the half-elven heroine of the Re:Zero series. She is part of the Royal Selection, where a talented candidate will be picked to become the future King of the Dragon Kingdom of Lugnica.

Her past is a heartbreaking tale. Due to being isolated for her talent and potential, her curiosity got tricked, that led to the frozen tragedy of her fellow elven people.

Her ice magic and history are evident in her hair. She has snow-white hair with a white flower clip on the right side. 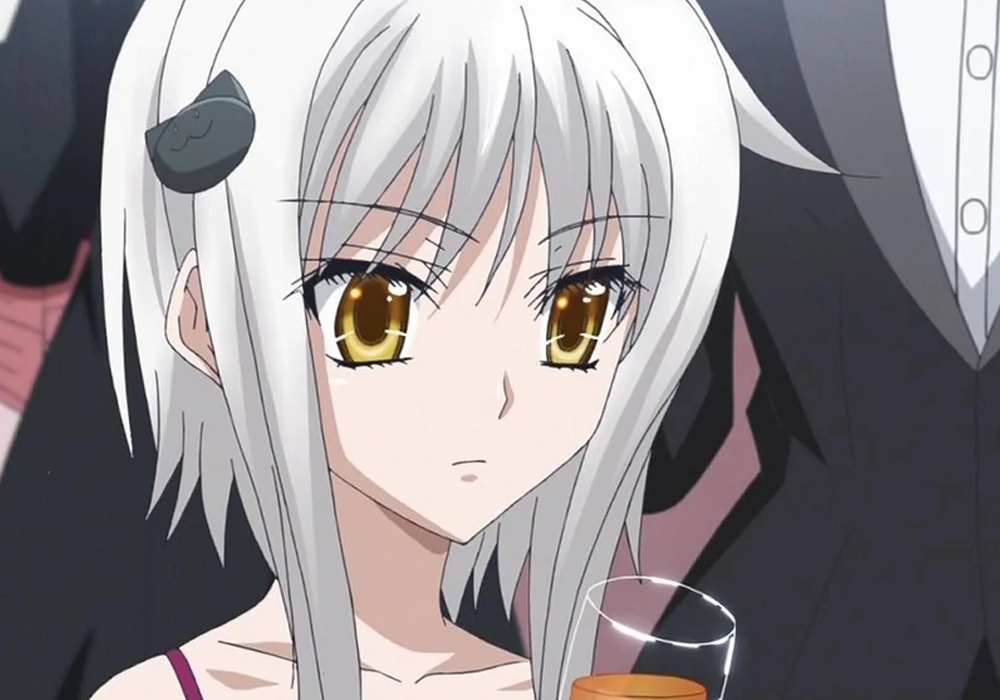 Up next is the rare Nekomata, Koneko Toujou!

Koneko’s original name was Shirone. After going through her character arc, she learned more about herself and came to terms with her past and her younger sister. She then changed her name – from Shirone to Koneko.

In her Nekomata form, she gets a pair of white cat ears and whitetails, which go very well with her short white hair. She also has a black cat hair clip as her accessory. Cute! 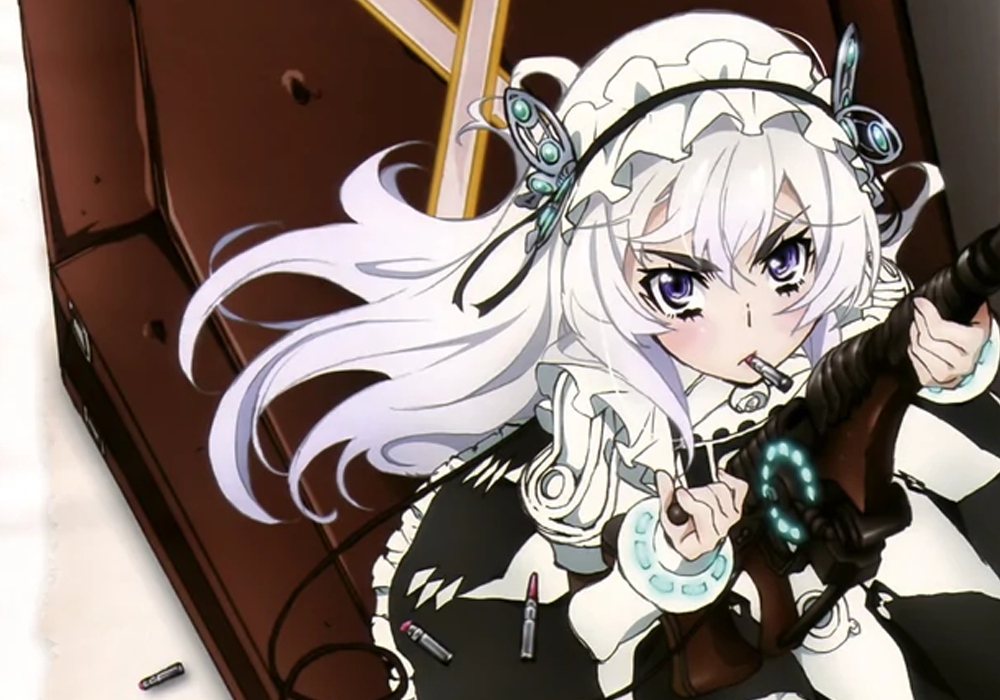 Chaika is a young sorceress who mysteriously carries a coffin on her journey. She is great at high-precision spells, which she shows early on in the show when she and Toru fight a unicorn.

The reason she carries a coffin is so she can store the remains of her father, Arthur Gaz, who was an emperor overthrown before his demise.

Hair-wise, Chaika has long white hair that reaches her lower back. She has a frilly headband with butterflies and a black and white dress.

Her dress suits her hair and eyebrows. But be careful – Chaika is sensitive about her thick eyebrows!

Next to show their glorious white hair is the Angel and deity attendant Vados from Dragon Ball Super.

Vados watches over Champa, who is the God of Destruction in Universe 6. She helps Champa train in martial arts, as well as gently remind him to take care of his health.

Then again, she can’t help herself from liking a variety of foods too!

Vados has her hair up in a very high and neat ponytail. With her white hair and light blue skin, she gives off an otherworldly vibe! 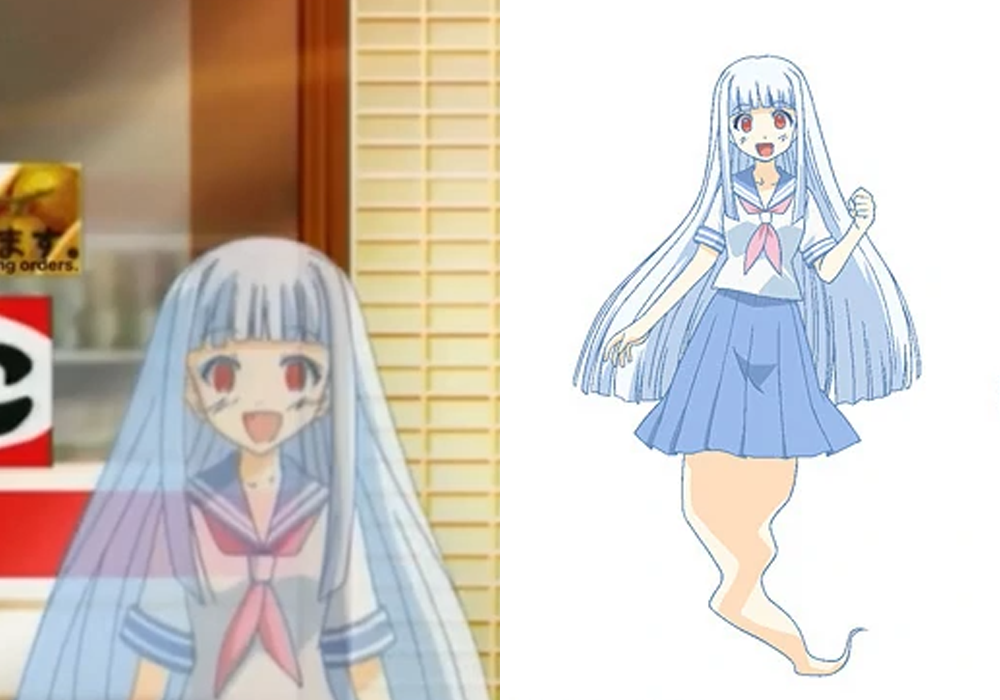 It’s tough being a ghost – all Sayo wants is to be seen!

Unknown to Negima and the rest of the class at first, Sayo is actually the first in the class list and is a ghost of a young girl who died many years ago.

Even though no one can see her, she still tries to participate in class and haunt her teacher. Hilariously, Sayo is more of a scaredy-cat than a scary ghost!

Since becoming a ghost, her hair has turned white. She has long, straight hair with full bangs, which was black when she was still alive. 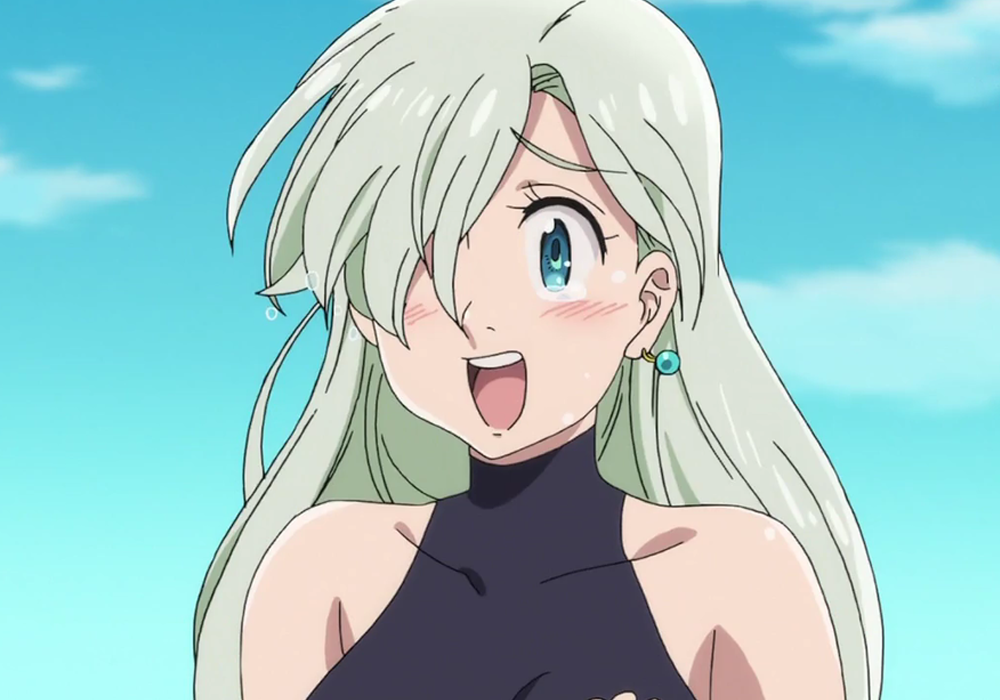 A goddess, not just for her hair, Elizabeth from Seven Deadly Sins joins our list!

Unbeknownst to her at the start of the story, Elizabeth is actually a reincarnation of the goddess Elizabeth.

Losing her memory didn’t help her either! She couldn’t remember her mother or even Melodias, who is her destined love.

Elizabeth has her long hair down but with some bangs covering her right eye. She later gets shorter bangs that reveal both her eyes. 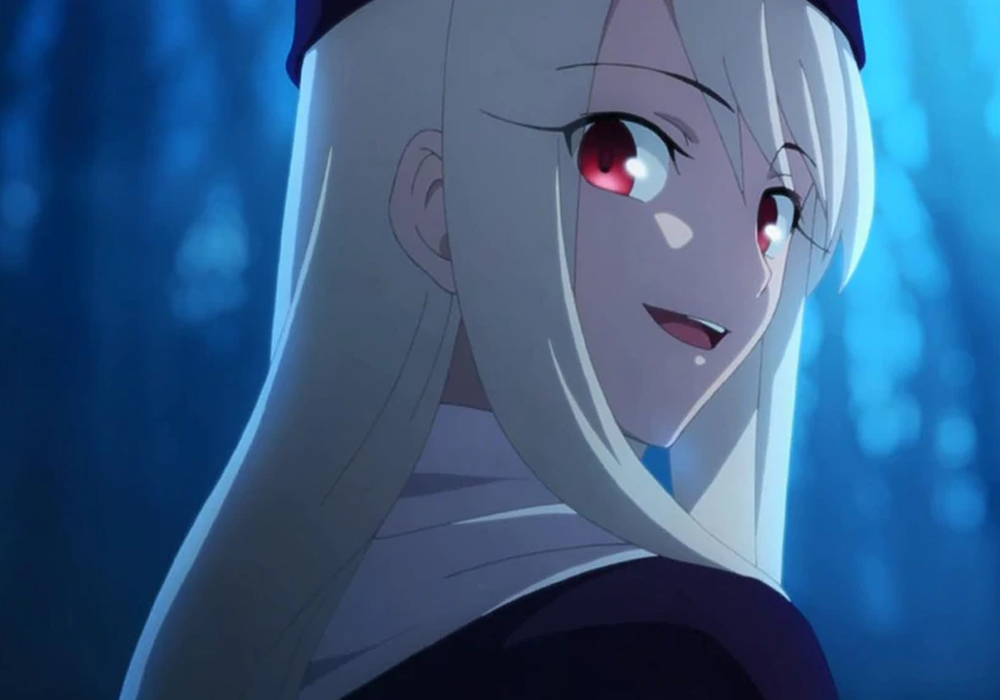 Illya is actually a homunculus made to become the best vessel for the Holy Grail. With her enhanced Magic Circuits, she was able to easily summon a servant.

Like other Einzbern homunculi, she has white hair, red eyes, and pale skin. Her white hair always goes well with her violet winter clothes! 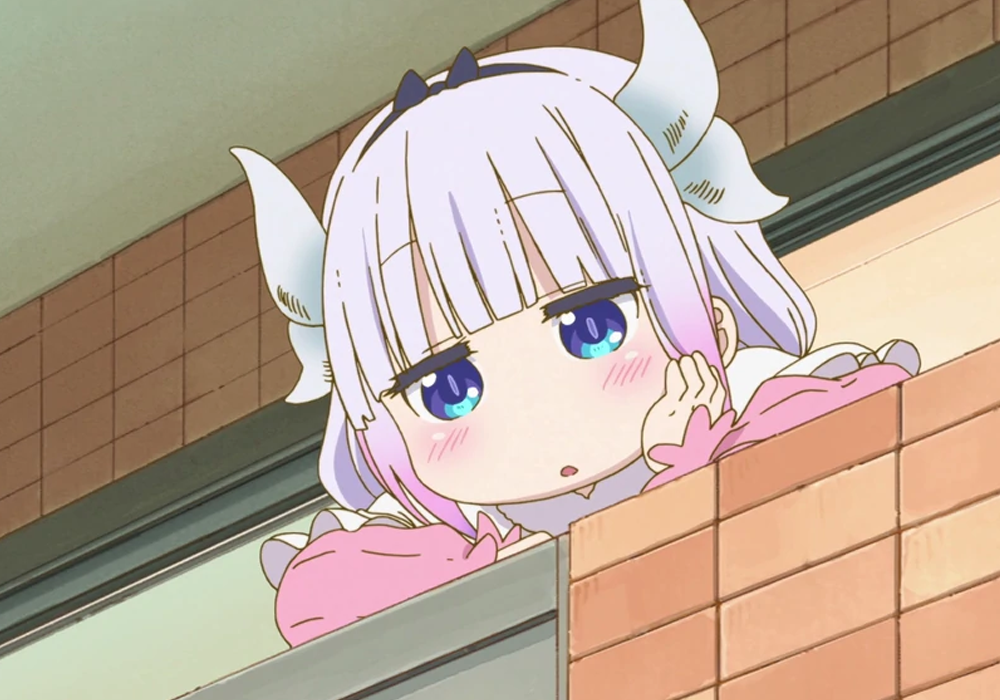 At number 15, we’ve got adorable dragon hijinks with Kanna Kamui!

Kanna is actually a dragon who was exiled from her land due to being a prankster. In her dragon form, she becomes a mighty feathered dragon!

But in her human form, she enjoys the appearance of a young girl with long white hair with lavender tips. Her hair is in two low ponytails, with a cute black ribboned hairband on her head. 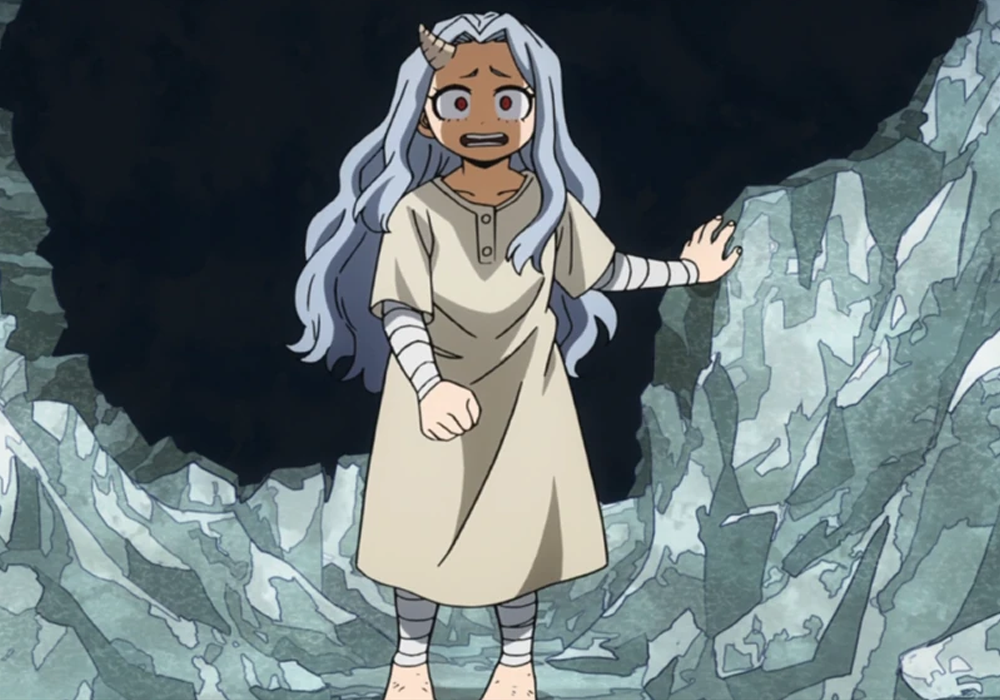 Due to her quirk, Eri has suffered a lot in the hands of Overhaul.

Since her Quirk can reverse physical states, she was kept in isolation against her will to drain her blood for Quirk-erasing bullets.

During her gloomy days, her white hair was long and unkept. After her rescue, her hair is noticeably neater.

With her silver-white hair and piercing red eyes, Suigintou was a scary and intimidating rival for the other Rozen Maiden dolls.

She can get really sadistic and spiteful, and her desire to win the Alice Game is the strongest among the dolls.

With her attitude, gothic lolita attire, and long locks, we can see why she scared the other dolls! 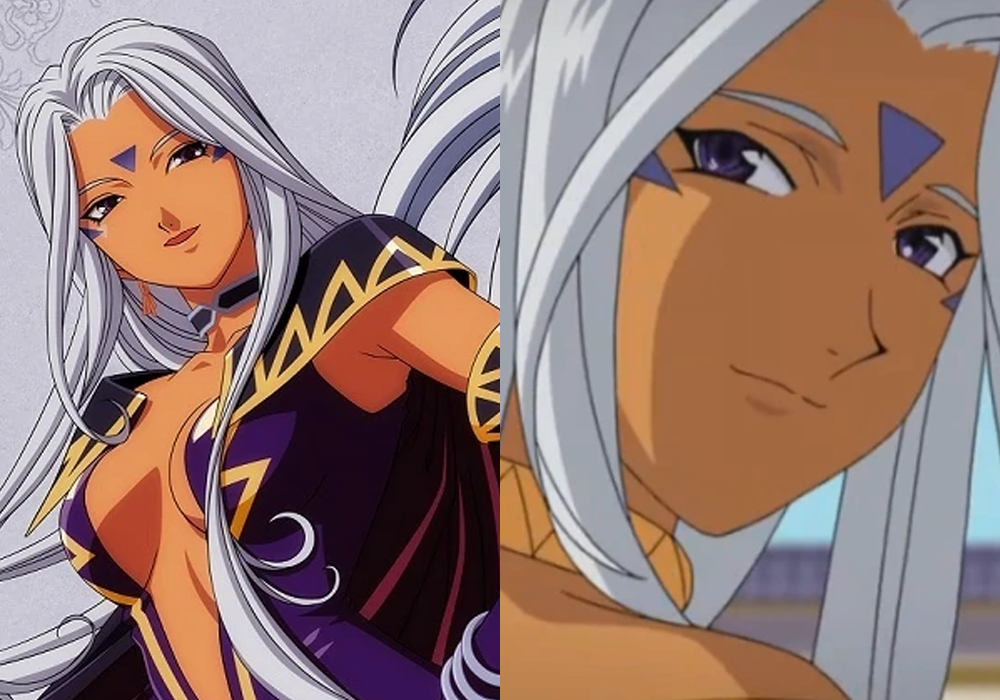 When it comes to a white hair anime list, we simply can’t skip an actual goddess like Urd!

Urd can be quite alluring and playful. She initially wanted to get in between her half-sister goddess, Belldandy, and the mortal Keiichi. Instead, she got punished by being forced to live with them!

Urd has long white hair. Her angel, World of Elegance, has half-white and half-black hair, which shows Urd’s half-demon and half-goddess nature. 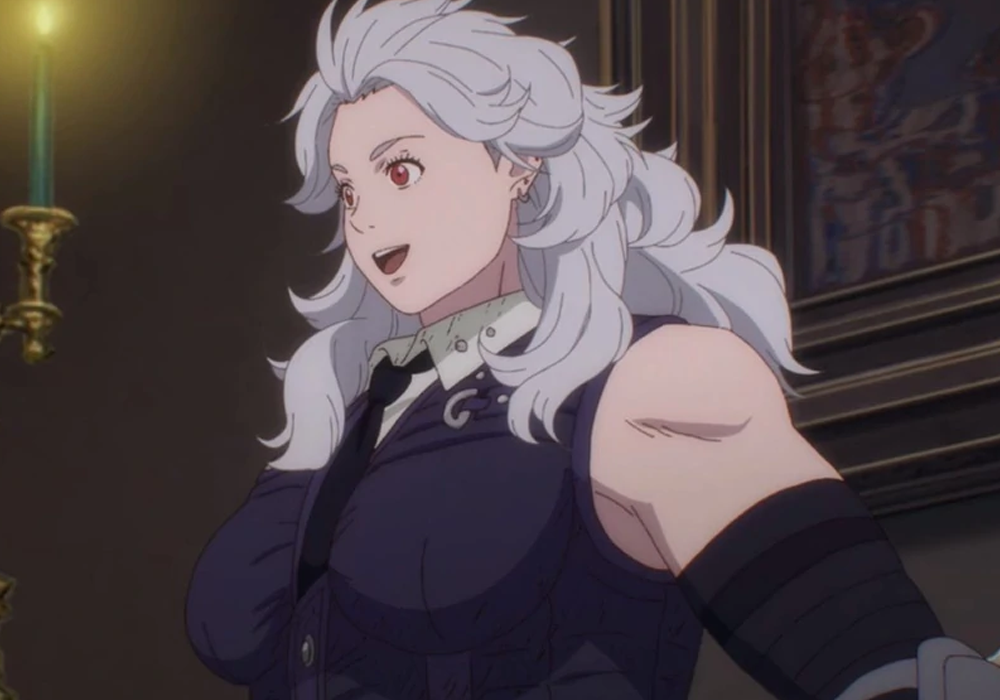 Need some healing after a brutal fight with evil magic users? Leave it to Noi and her luscious white locks!

Noi is a magic user who has healing powers. This is actually quite rare among magic types, and she uses it well to help Ebisu with his wounds.

Noi’s hair is as fantastic as her magic! She has fluffy white-silver hair that’s uneven and kinda shaggy. It’s like a majestic mane! 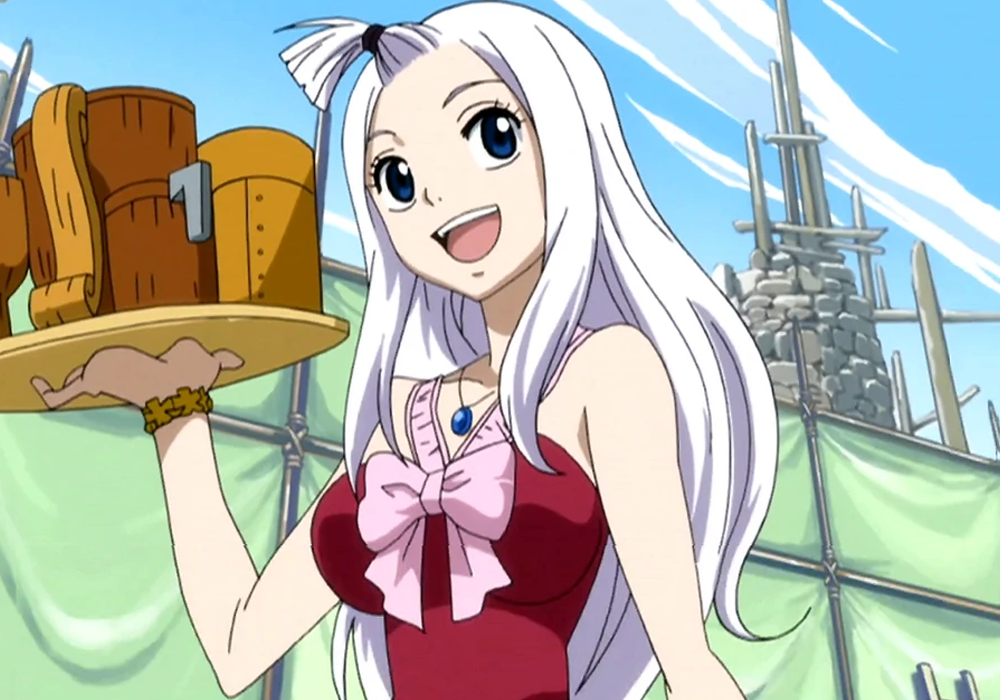 Another magic white haired anime girl makes it to our list!

This time, it’s Mirajane, a member of the Fairy Tail Guild who has the rank of S-Class mage. Her magic is “Take Over,” which copies the appearance and powers of different beings.

Not only is she a great mage, but she also models for Sorcerer Magazine! Interestingly, she lets down her tresses but puts her bangs in a ponytail. 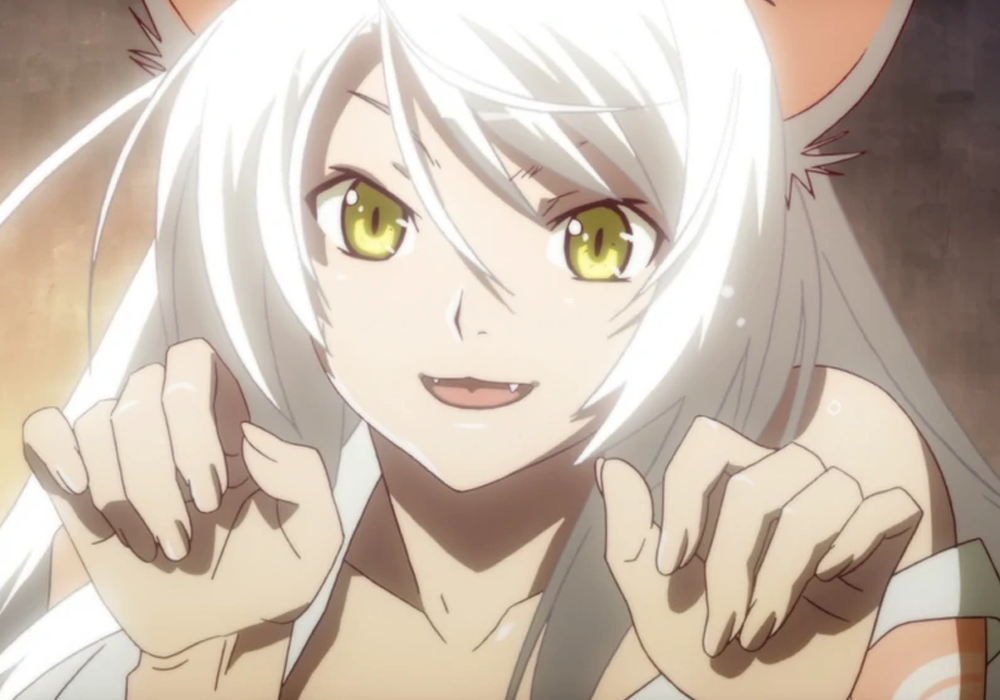 At number five, we have a meow-tastic white hair entry with Black Hanekawa!

Black Hanekawa is actually an alternate identity of Tsubasa Hanekawa. Due to high stress, the Sawarineko oddity manifests in her, and she becomes this cat girl spirit.

While Tsubasa is timid and reserved, Black Hanekawa is the complete opposite! She is playful, likes to tease, and sharp with her words and claws!

Black Hanekawa likes to let her long white hair down, as opposed to Tsubasa’s braids. But at one point, she had her hair at shoulder length. 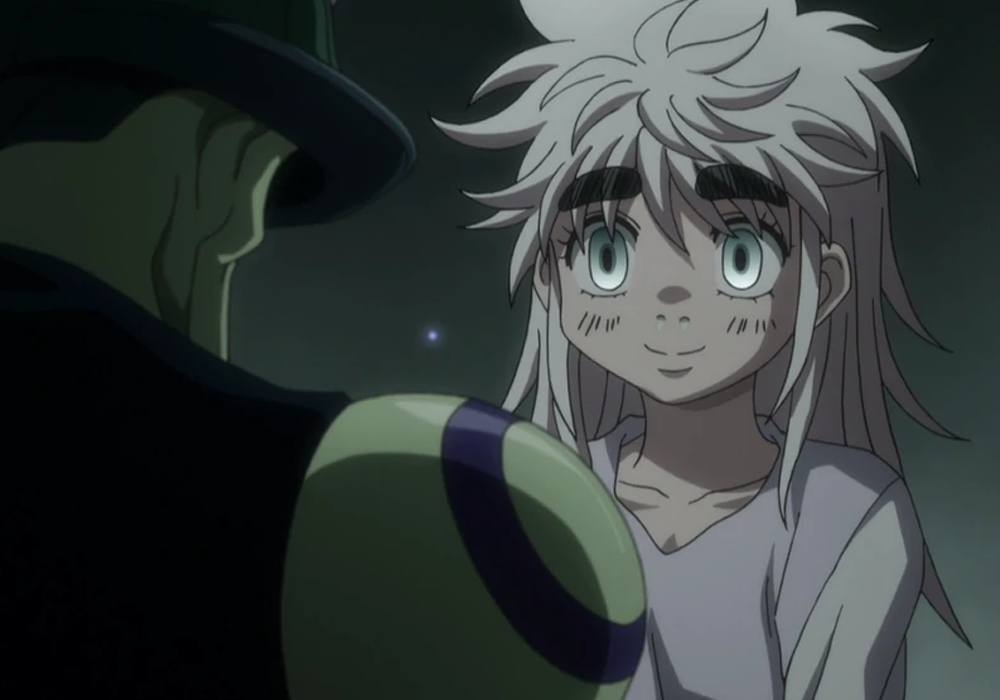 Gungi genius Komugi and her unique spiky white hair gets the 4th spot in our list!

Komugi is a blind girl who learned Gungi at a young age. She quickly became very good at it and participated in contests to earn money for her family.

She was summoned by the Chimera Ant King so they could play. At first, Meruem was annoyed at his losses against her, but a friendship blossomed between them.

Komugi’s spiky and uneven white hair bunched in two is quite unique! 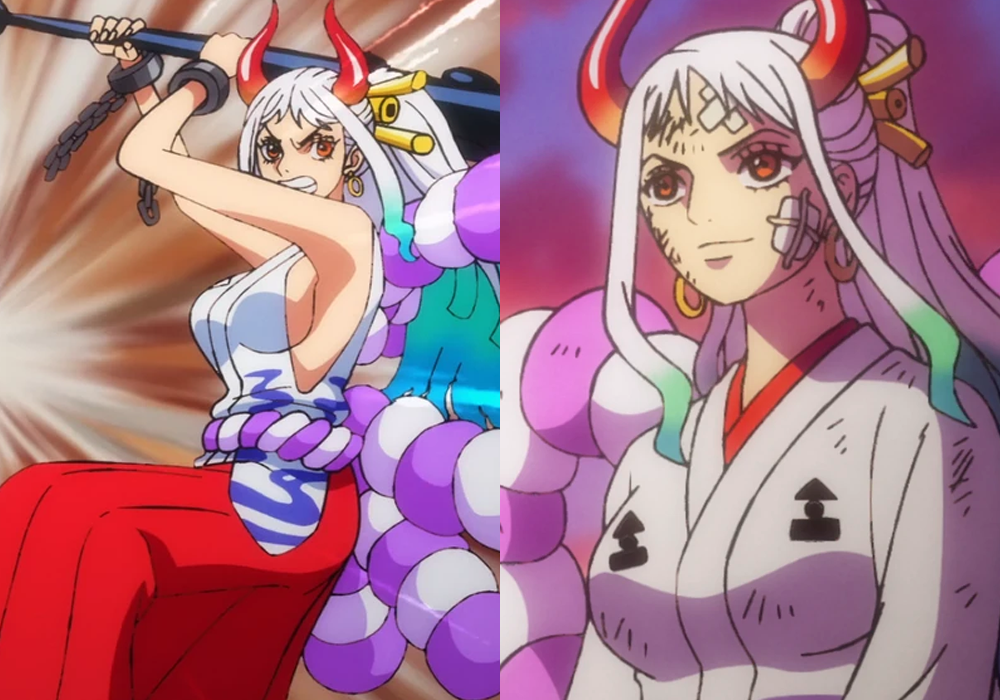 And in number three, we have the strong and mighty Yamato from One Piece.

Yamato was raised as the daughter and heir of Kaidou. Eventually, Yamato threw those roles away and decided to be a man to become just like Kozuki Oden.

Oden was quite an inspiration to Yamato. He was a brilliant samurai and pirate, and the journal he left continues to guide Yamato.

Yamato has long white hair with aqua-blue-green tips. To keep it out of the way, Yamato puts it in a ponytail. 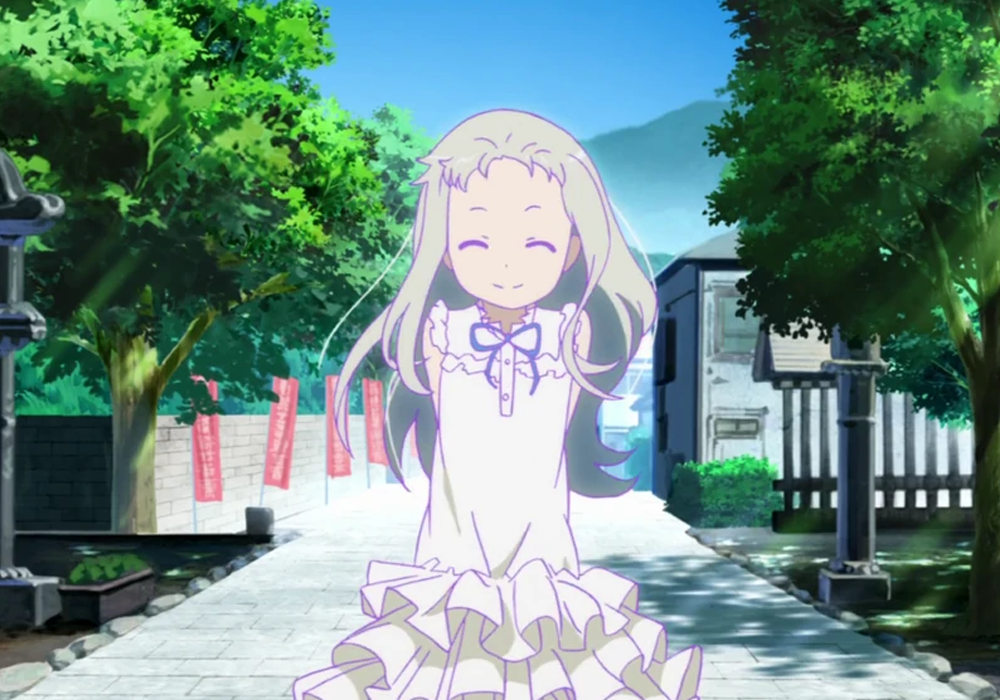 Menma, we found you!

At our runner-up spot, we have Meiko “Menma” Honma from the heartwrenching series AnoHana.

Menma’s childhood tale is a tragic one. She died when she was very young due to an unfortunate accident. But inexplicably and miraculously, her spirit comes back!

To the bewilderment of Jinta, her ghost looks like she aged with her friends.

Her silverish white hair is longer and reaches her lower back, her dress looks like her old dress but bigger, and she is still her usual adorable and ditzy self!

But it seems like her friends have not gotten over her death. Maybe that’s why she dropped by for a visit! 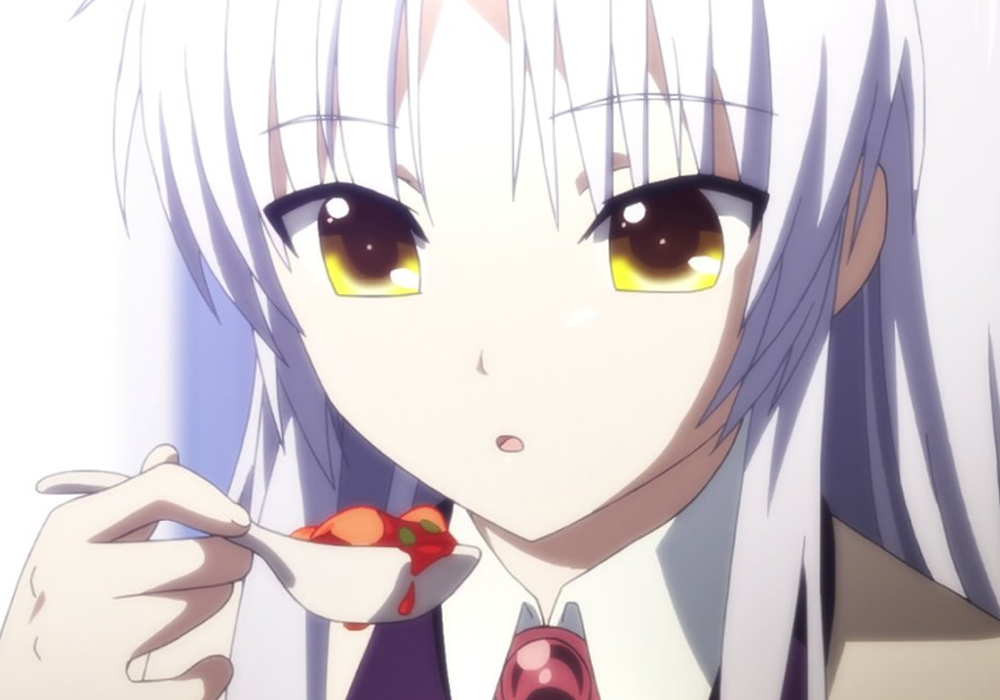 And finally, at number one, we have the silent white-haired angel who actually has a heart of gold – Kanade Tachibana!

Aptly named as Angel by the students who fear her, Kanade is the Student Council President in the bizarre world they live in.

She is quiet, short with words, and seemingly cold at first. She eventually opens up to Yuzuru and others.

Kanade puts up a tiny portion of her white hair in a ponytail. You won’t see it unless you look behind her!