Aside from the joy of combat, MMOs are about status symbols. Flashy armor, massive anime angel wings, those prestigious character titles that let other players know you mean business and have no business, all meant to express yourself and assert dominance. In Final Fantasy 14, one of the truest flexes is the mount.

Getting Your First Mount In FFXIV

If you’re a newcomer to the high-flying world of mounts, listen closely. Keep chugging through the Main Scenario quests in the upper left corner of your screen up until you join one of the Grand Companies. (I joined the Immortal Flames because I have what? Taste.)

Then you must complete the corresponding My Little Chocobo quest. Easy as kweh.

Immortal Flames: Shift it on over to the Ul’dah Steps of Nald 8X, 8Y

You should be promptly rewarded with your chocobo whistle. Name your new bird wisely; They’ll serve you well.

Below you’ll find 5 Eorzean rides that will make your FC’s jaws drop. Make the casual players wish they ventured out of RP! The mounts may be flashy as all Pandeamonium or just harder to find than a Lalafell that can read. Either way, get out there and ride!

Rolling up on the FC house on a mech dragon is like showing up to your high school reunion in a Rolls Royce. (And showing up on the basic white horse is like parking your used Dodge Neon.) 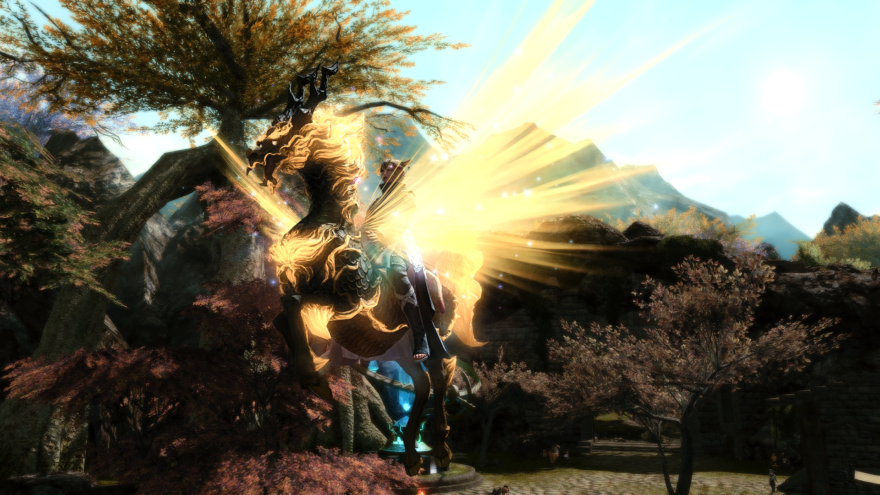 Is it a horse? Is it a deer? Is it a dragon? No! It’s the Kirin! Somehow more gilded than the 45thpresident’s apartment, this hoofed flyer is the culmination of six other mounts.

To wrangle this Au-some (like gold, get it?) stallion, you’ll have to repeatedly best the six 2.0 EX Primals: Garuda, Titan, Ifrit, Shiva, Grandpa, and Danger Noodle (Ramuh and Leviathan). Once you’ve collected each of their unique elemental horse mounts as drops from the trials, talk to Mor Dhona’s premier unemployed musician, Wandering Minstrel, to claim your golden pony. You can predictably find him in the pub at X21.7, Y8.7. 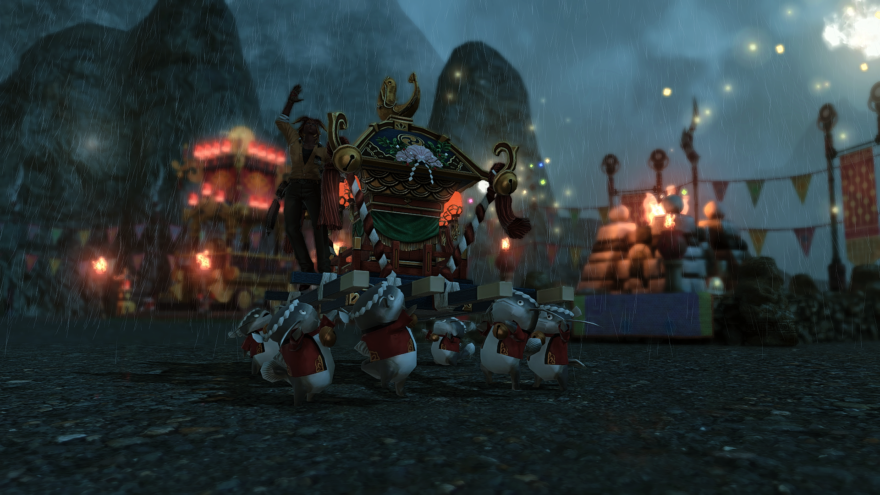 There are only two things I know for sure: 1) The Namazu are perfect beings. 2) Everything. Maxing out beast tribe reputation may be the FFXIV equivalent of a professional networking luncheon, but this mount makes it worth the hobnobbing. The Mikoshi Flute can be purchased with 20 Namabucks after reaching the Bloodsworn (maximum) rank with the tribe.

This endeavor will require a crafter or gatherer of level 60+ and completion of the Yanxia questlines Courage the Cowardly Lupin, Perchance to Hanami, and The Azim Steppe questline One Size Fits All. Complete this legwork, and you’re less than halfway there! Complete daily tasks for your new, diminutive fish friends, and you’ll be riding in opulence in no time. 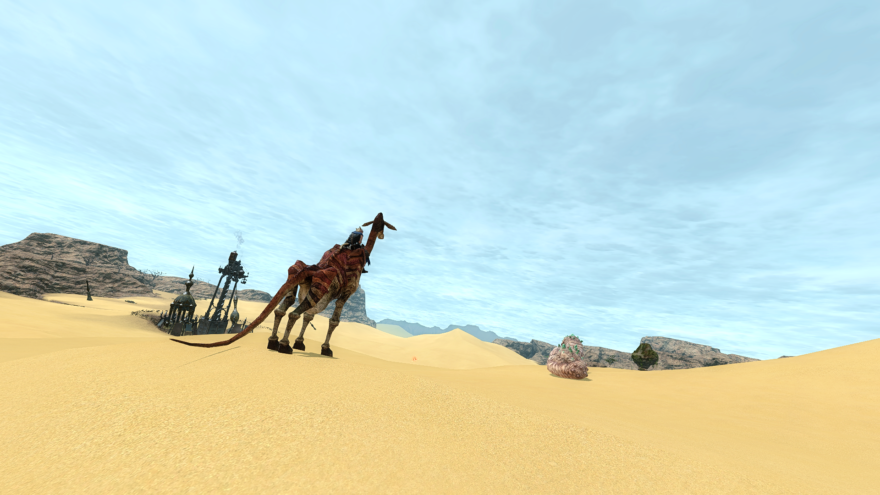 Ok, yes, it’s just a giraffe. Indulge me here. The dhalmel stands tall and proud among the other fauna of Eorzea. Some of you may affectionately remember this handsome guy from FFXI where he spit on you and used Healing Breeze. Good times. The dhalmel may not be the rarest mount, and it may not be the flashiest mount…

The Dhalmel Whistle can be obtained as a prize from Kupo of Fortune in the Ishgardian Firmament or purchased somewhat inexpensively off the market board. You don’t always need to spend a lot to have a blast. 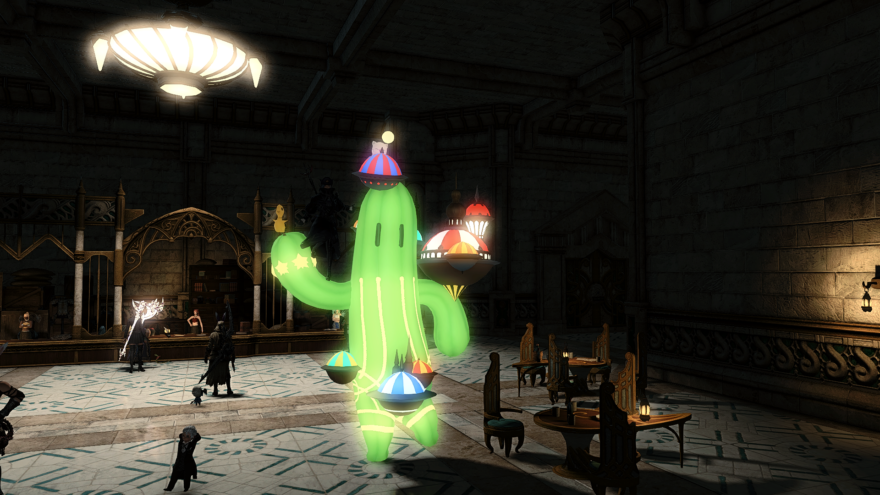 Now I’d never advocate gambling, but for such a work of beauty, I absolutely would. The Gold Saucer is Eorzea’s Sin City. This is the place where uptight Miqo’te and strait-laced Roegadyn go to forget their cares and wear bunny ears. (Seriously.)

This bouncy green scale model of The Gold Saucer itself lets you take the thrill of the casino wherever you go! Minus all the games and people and the ability to enter. A mount that catches the eye that sparks whimsy. A mount that says, “I can stop any time I want!”

To access The Manderville Gold Saucer, talk to the Well-heeled Youth in the Steps of Nald. This iconic mount can be yours for the low, low price of 2,000,000 MGP! Is that the right number of zeroes? You had better get to playing. 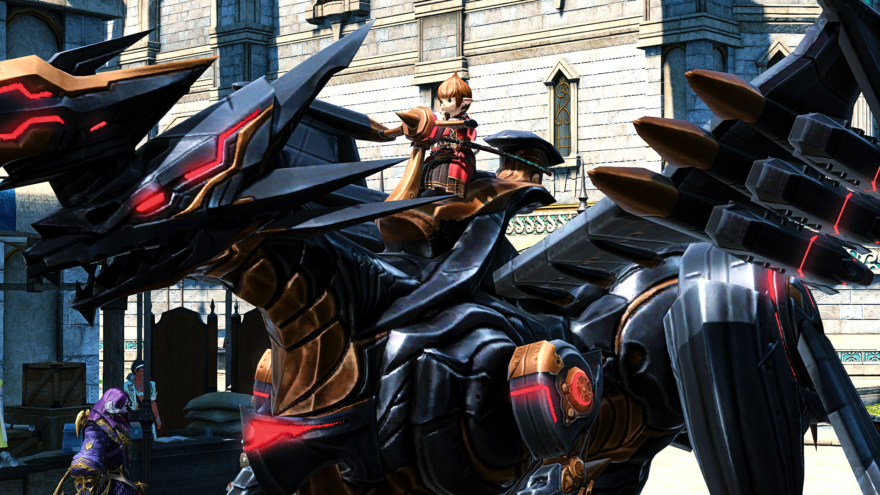 The Zoids franchise has been found scalped. This glorious mechanical dragon is an FFXIV mount beyond compare.

With claws of metal, fangs of metal, and fearsome wings of… you guessed it, metal, this skyfaring roboticized lizard would make even Robotnik do a double-take. (Is that a Sonic reference? Maybe it was, sue me.) Just the sound this beautiful baby boy makes while stomping around has me more than sold. Throw some ludicrous jet engines in for flavor, you’ve got yourself a stew going.

The Landerwaffe is the Kirin of the Shadowbringers expansion. You’ll need to clobber the 7 ShB EX Trials to get your mitts on this mega metallic monster.

You’ll have to obtain the Gwiber mounts from all these foes: Titania, Emerald Weapon, Ruby Weapon, Diamond Weapon, Innocence, Warrior of Light, and the boyfriend everyone loves to hate, Hades (Emet-Selch). Once you’ve bagged all 7 birds, slide on over to The Lochs, X11.5, Y22.5, and talk to the Warmachina Fanatic. 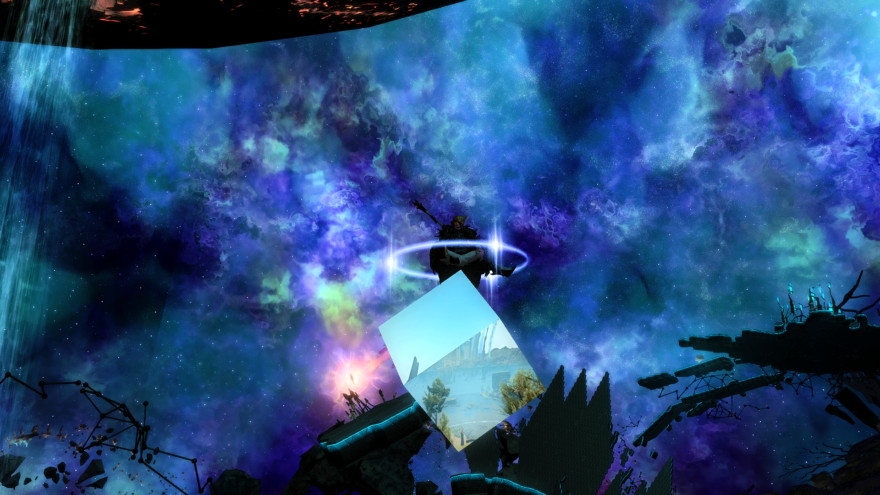 Look up in the sky! It’s an orb! It’s a cube! It’s a triangle! No, you absolute morons, you complete buffoons, you immaculate dullards, it’s Ozma!

You heard that right, folks, the Weeping City boss that had us tearing our hair out on release, now available in a snack-sized ridable form! This is the only mount on this list I do not personally have, or will soon have, purely for the fact that I would rather clean the titanic with a toothbrush than go through the process of obtaining Ozma.

It would take me the entire length of this article alone to accurately guide you to obtaining this FFXIV mount, and I’ve got plans tonight. Look up Eureka and the Baldesion Arsenal if you’re a skilled player with an appetite for pain. (In truth, it’s not that bad. You should be prepared for a huge time investment if you’re interested.)

How to Increase Mount Speed in FFXIV

[…] on your own two legs is so out of style. As you learned in our mount guide, a sweet ride is where it’s at in Eorzea. Mounts are fast, but what if they were […]

How To Dye Your Gear in FFXIV

[…] gave you fashion advice for your chocobo, recommendations for your rides, and a fantasia guide (FFXIV plastic surgery); now it’s time for more typical fashion advice. In […]

How to Hide UI in FFXIV

[…] Now that you can hide your UI to up your screenshot game, consider our mount guide to finding some picture-worthy rides. […]

How to Summon Your Chocobo in FFXIV

[…] you don’t yet have your Chocobo at all, check out my mount guide. Or check it out for a laugh. Hot people read my articles. Just […]

How to Change the Color of Your Chocobo in FFXIV

[…] you read my list of mounts to make your FC jealous, you know how important it is to ride in […]