So you’re ready to settle down and get hitched? Of course you want a wife to come home to after a long day of assassinations, dungeon diving and theft.

There are two, very important reasons why having a spouse in Skyrim is a good idea:

Who is the Best Wife in Skyrim? Hot Wives Roundup

There really isn’t much different between the wives as the benefits are the same (as above) except perhaps the property they own themselves.

Personally, I find it better to have them move into your own house which can be more convenient. Some of these wives also make the best followers in Skyrim too.

You may also be interested in our Skyrim Hottest Husbands Guide.

There are 30 potential wives available and we have picked 10 of the best Skyrim Wives. So let’s see who the best and hottest wife in Skyrim is… 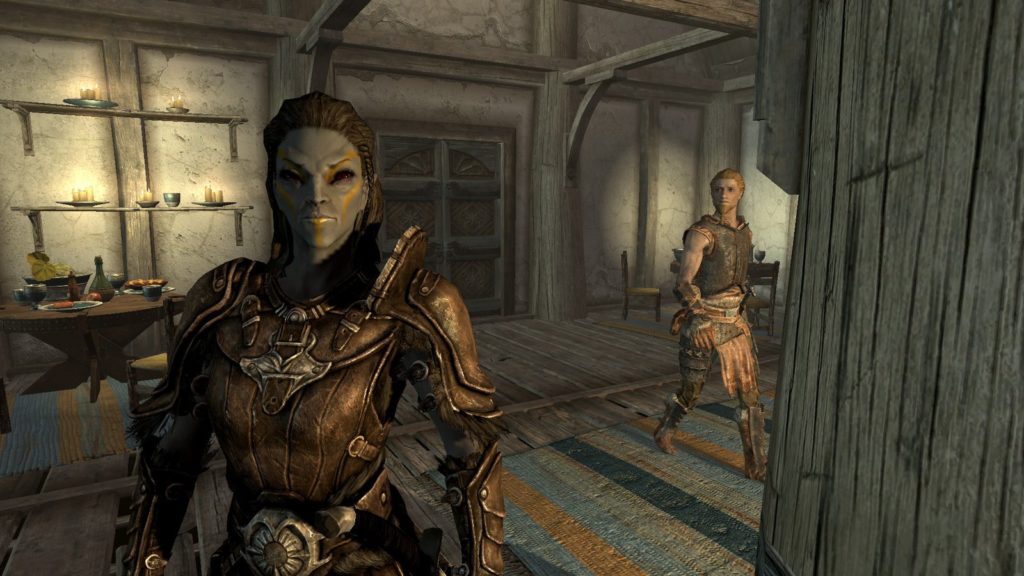 Jenassa is a lady for hire (not like that) for 500 gold. She is also a great candidate for marriage and hiring her as a follower is the only requisite for making her your wife.

Jenassa makes a good wife and a good fighter to take with you as she is a good ranger and has a max level of 40. She can be a little sassy and has a general dislike of mines. 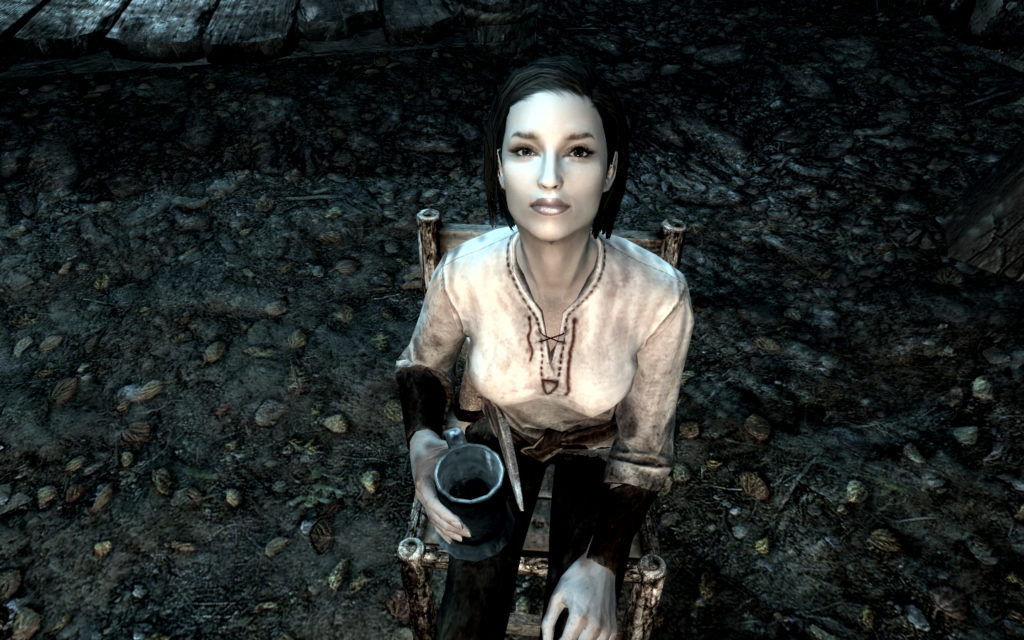 If you want the Tomboy worker vibe Sylgja could be the wife for you. Sylgja does a 12-hour shift at Redbelly Mine and can be found wearing miners clothes, boots, and a pickaxe.

To win her favor Sylgja will ask you to do a Special Delivery and after that you can pursue her as a wife. As a wife Sylgja is fairly independent and if left she will just carry on with her regular schedule. 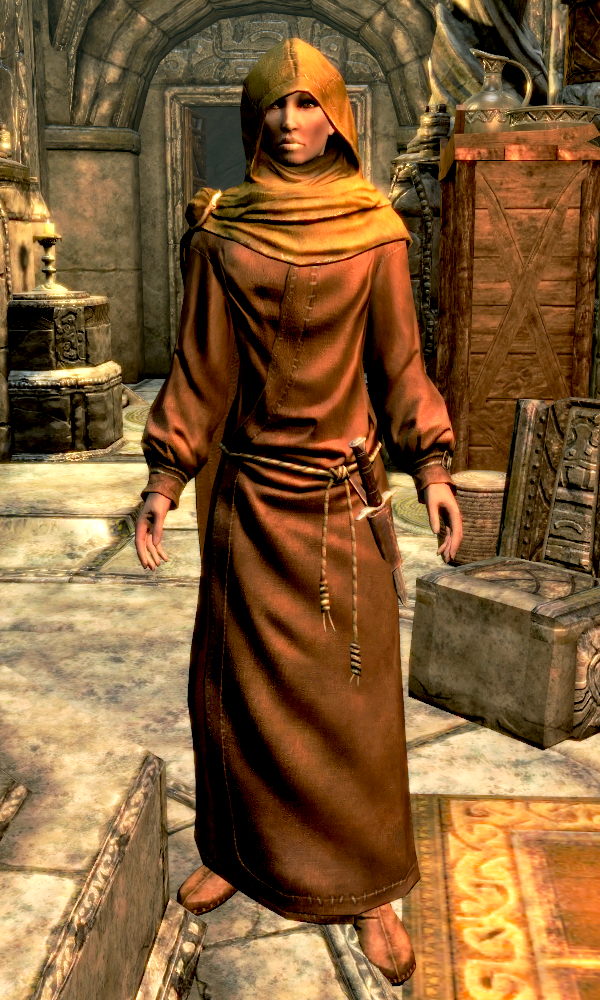 Fancy some of that holy action, then this Priestess of Dibella could be the way to go. Although modest we feel there’s blatantly a hot woman underneath the robes. To marry Orla you have to complete the quest “The Heart of Dibella”.

She’s not a particularly great wife to take with you as she has a max level of 6. She also refuses to move in with you preferring the temple. This means you cannot get the Lover’s Comfort bonus so really she’s a pretty bad wife choice. 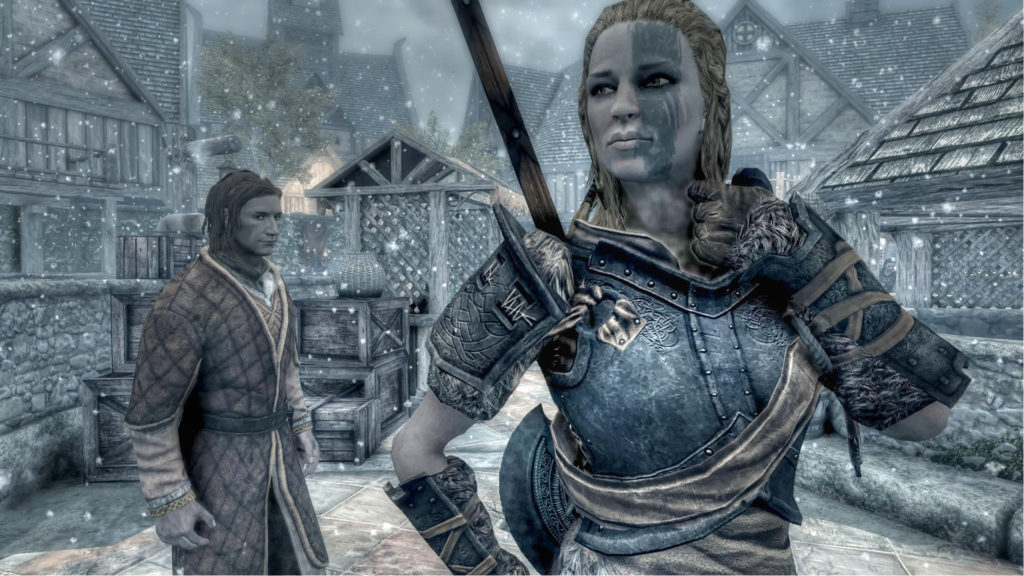 Mjoll makes a great follower and also a great choice for a wife in Skyrim. Her banded iron armour isn’t the best but she looks fierce and the face paint is cool.

To marry Mjoll you’ll need to complete the quest to return her sword Grimsever. Mjoll does make a great follower and wife for her entertaining dialogue. 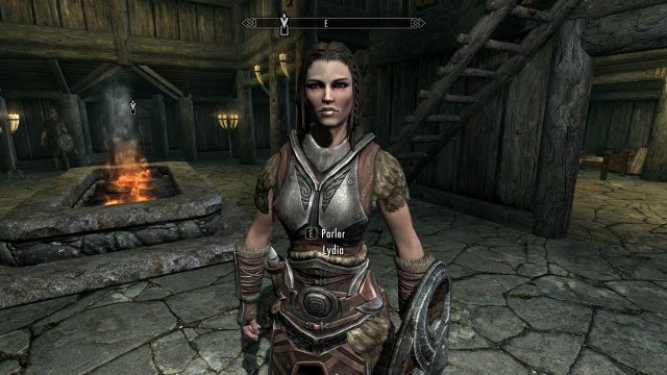 To be in with a chance to marry Lydia you’ll need to complete the quest “Dragon Rising” and buy the house Breezehome.

She will become your housecarl so marrying her feels a bit like mixing business with pleasure. Lydia rocks steal heavy armour and has a max level of 50. 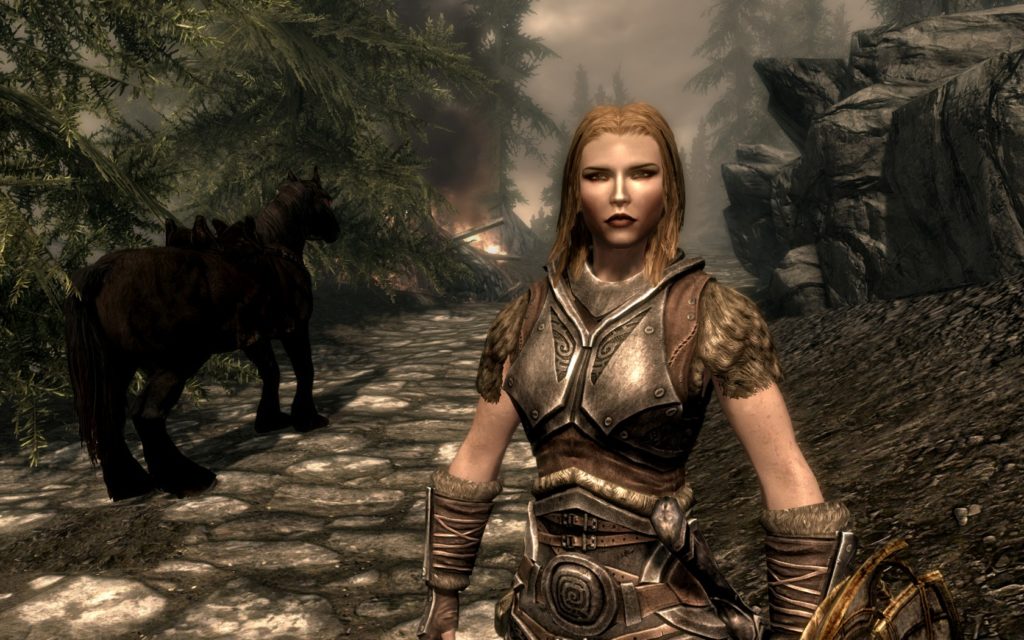 Another housecarl who can be your wife, Jordis has the scandanavian look and is clad in steel armour.

To be able to marry Jordin you need to become a Thane of Solitude and purchase the Proudspire Manor (one of the best houses in Skyrim). Jordis, like Lydia, has a max player level of 50 and also makes a good follower. 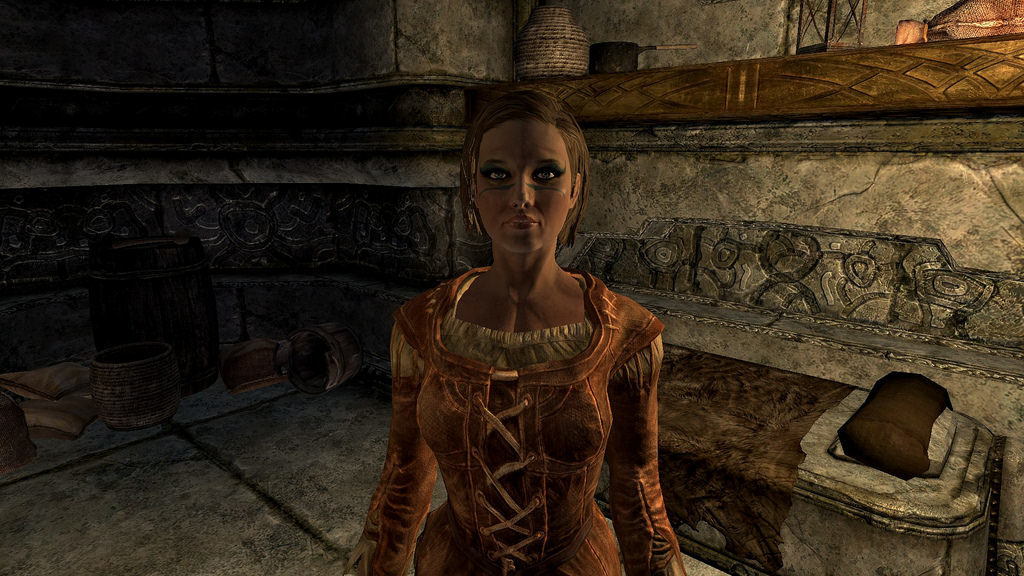 Muiri was born and raised in Windhelm but was driven out after being framed for a theft. As part of the Dark Brotherhood questline you’ll help Muiri get revenge on the guy who framed her.

Muiri has now relocated to Markarth and works in the Apothecary. Muiri is simple yet elegant in her farm clothes but not much use as a follower with her max level of 6.

To marry Muiri you must complete the quest “Mourning Never Comes”, kill Nilsine and become a proprietor of the store to sell Apothecary merchandise. 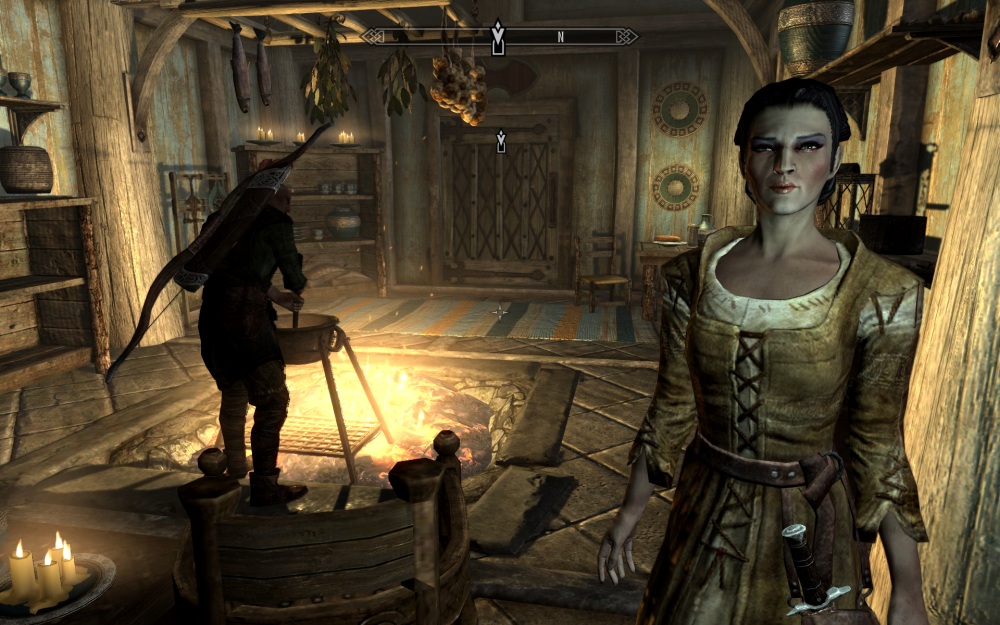 If you like some drama, Camilla is involved in a love triangle already so why not jump into the mix. Your competition for her heart are Faendal and Sven. Kill her brother Lucan and she will take over the Riverwood Trader shop in Riverwood.

To marry Camilla Valerius you need to complete “The Golden Claw” quest. 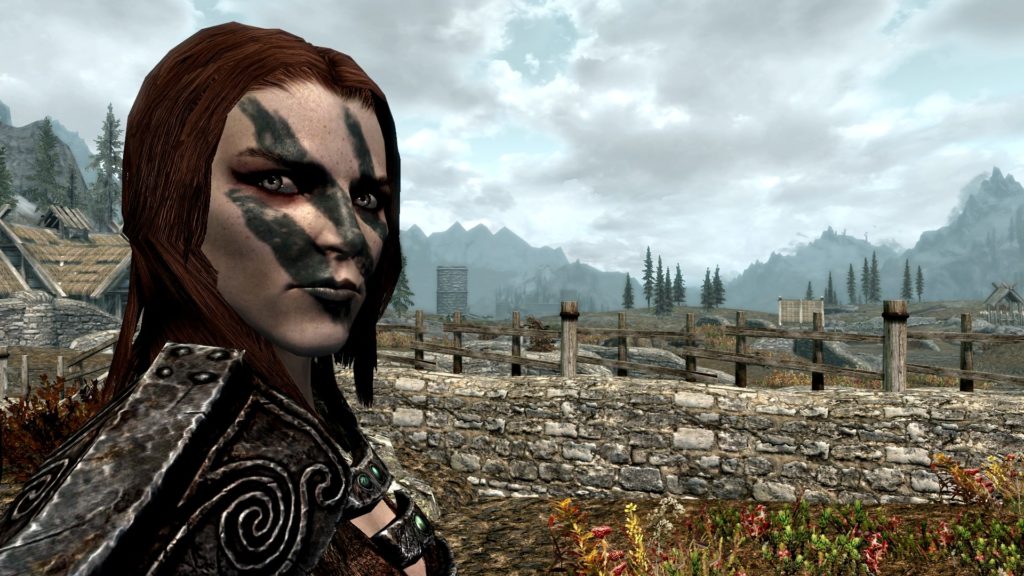 Aela the Huntress is easily at the top of the Skyrim wives list. Aela is an elite warrior and part of the Companions.

You’ll get to know her quite well during the Companions questline and will need to complete the whole thing if you want Aela to be your wife. She looks cool in her hunter outfit, badass face paint and is hot. She’s also pretty hand with a bow too. 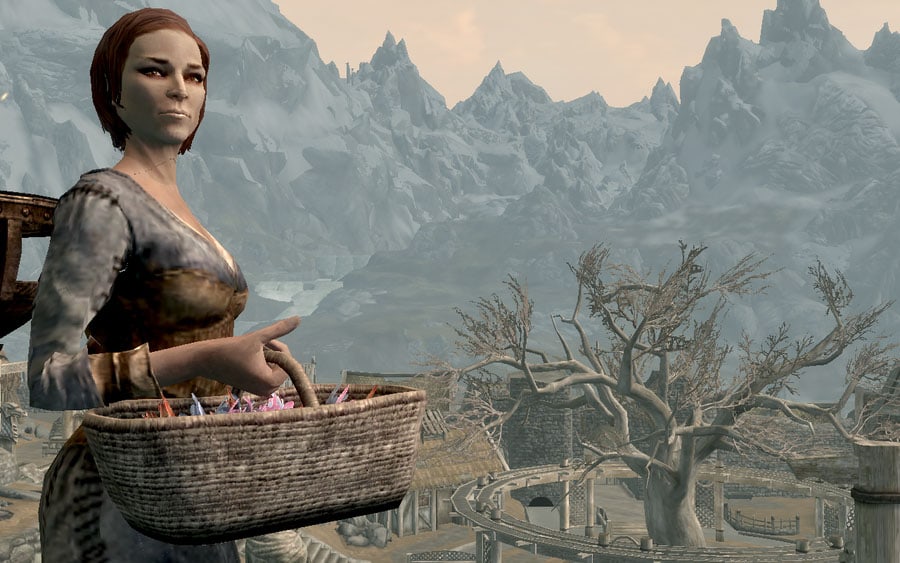 These lists are always going to be subjective but Ysolda in our opinion, is the best wife in Skyrim. She’ll make a hot wife and is really sweet too. Ysolda is a modest woman with her own house in Whiterun.

Ysolda is one of the easiest women to marry as all you have to do to win her favour is bring her a mammoth tusk.

Who do you think is the best wife in Skyrim?

How many wives can you have in Skyrim?

You can only have one wife in Skyrim. If your spouse dies, or you're feeling murderous, you can not remarry. Having more than one house does not change this either.

Who is the prettiest wife in Skyrim?

There are a few good options for contender as the prettiest wife in Skyrim. Here are the top 10:

Can a girl marry a girl in Skyrim?

Yes regardless of your race or gender, you can marry anyone who is marriageable in the game whatever gender they may be.

Can you marry a Jarl in Skyrim?

Sadly, no major characters can be married in Skyrim and that means you can't marry a Jarl.