There are three types of Allagan Tomestones in use at any given point in time.

Two varieties will be from the mostcutting-edge content for the most recent expansion; These two Tomestones rotate out over the patch cycle.

The current types of Tomestones for the live version of Endwalker are of Astronomy and Causality.

Allagan Tomestones of Poetics is the third type of Tomestone; Poetics do not rotate as Final Fantasy gets updated, keeping their uses in older expansions as the game grows.

Farming Allagan Tomestones of Poetics is as easy as playing almost any content in Final Fantasy XIV Online.

Roulettes, old content, and quests from past expansions from A Real Reborn to Shadowbringers reward them. Wondrous Tails rewards piles of them, too, through the nine seal reward.

This omni-useful currency has a low, easy-to-hit cap of 2,000; Poetics have about 2,000 different uses, too. As long as players are paying attention, there should always be somewhere to spend them.

If we listed every use for Poetics in this article, it would be too long to be helpful.

In this guide, we’ll explain some of the community’s favorite and most popular ways to spend those excess Allagan Tomestones of Poetics!

Do not let yourself hit that hard cap of 2,000. Anything you gain after is just wasted.

If Square Enix ever released a feature that displayed the total number of Poetics each player has wasted by being over the cap, many adventurers would be in tears, for sure.

Is there a method we didn’t list that deserves attention? Let us know! 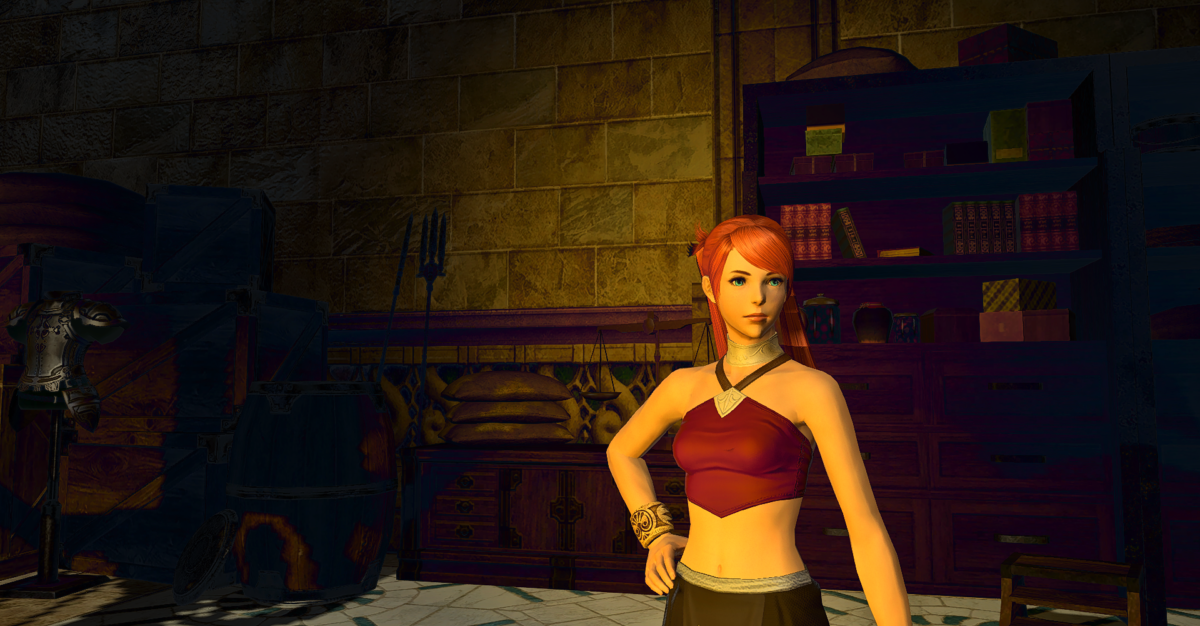 The Anima Weapon quests are a notably more enjoyable experience than the Relic Weapons from A Realm Reborn.

However, the Anima Weapon questline requires a veritable skyscraper worth of Allagan Tomestones of Poetics to complete.

The dazzling glow effects make these tools of battle worth the effort, in any case.

Tomestones of Poetics can be used to buy the materials needed for the Anima Weapon quests!

Other ways to spend your poetics may be tempting in the short term, for gil and the like, but if you’re still eyeing any Anima Weapons, you should focus on using your stockpile for these quest requirements.

There are other ways to earn gil, and glamour is the absolute endgame.

Our favorite is the Astrologian’s funny pink bubble.

Head over to Idyllshire with your pocket full of Poetic Tomestones and find the vendor named Hismena.

Plus, Hismena is convenient for all sorts of peripheral reasons if you’re actively doing the quest line.

These are needed in quantities varying from 1 to 80. See our Anima Weapons Guide for the specific steps. It’s a long, rewarding road. 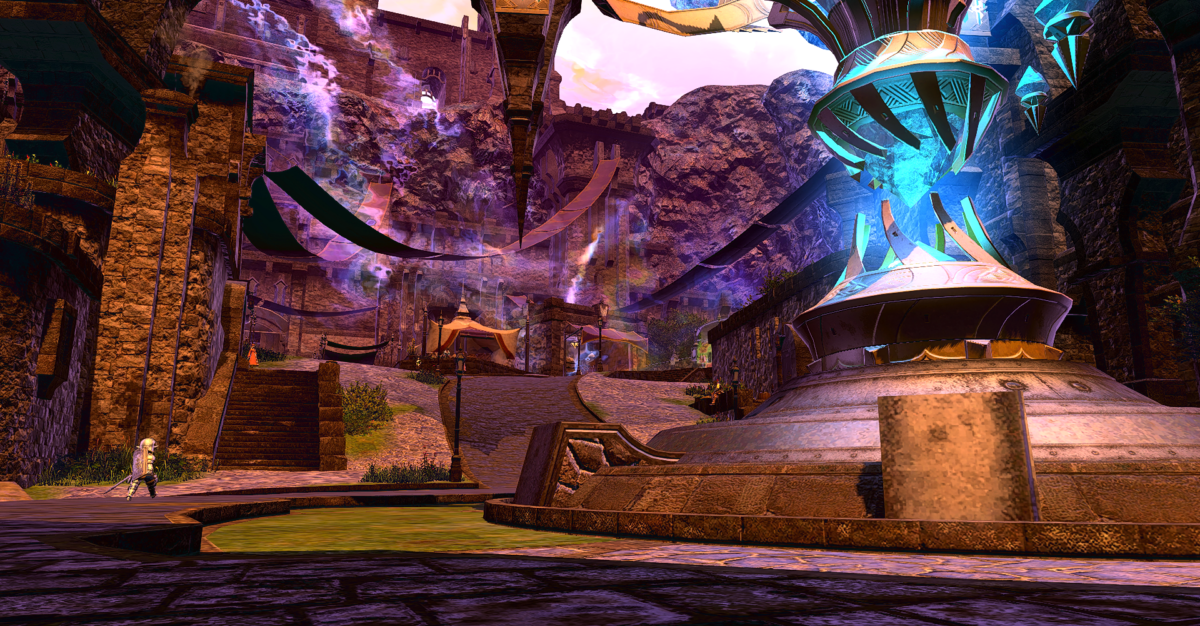 We’ve completed this questline more times than any reasonable Eorzean should. (Five.) It’s long, winding, and will test your tenacity.

You will need a different-sized skyscraper of Poetic Tomestones to craft these weapons.

For convenience, the best vendor for players pursuing the Zodiac Weapon questline is Auriana in MorDhona.

Changes to Poetics’ availability and methods of Tomestone farming makes these OG ultimate weapons easier to get than they were in 2.0.

The challenge book phase of the questline will require 900 Allagan Tomestones of Poetics. These are purchased from G’jusana, just a few steps from Auriana.

The books take longer to complete than gathering the Poetics to purchase them; we warned you.

You will only be able to buy these if you are on the relevant quest.

Forging a Zodiac Weapon is a long road paved with fine details. Give our Zodiac Weapons Guide a read for a step-by-step account. 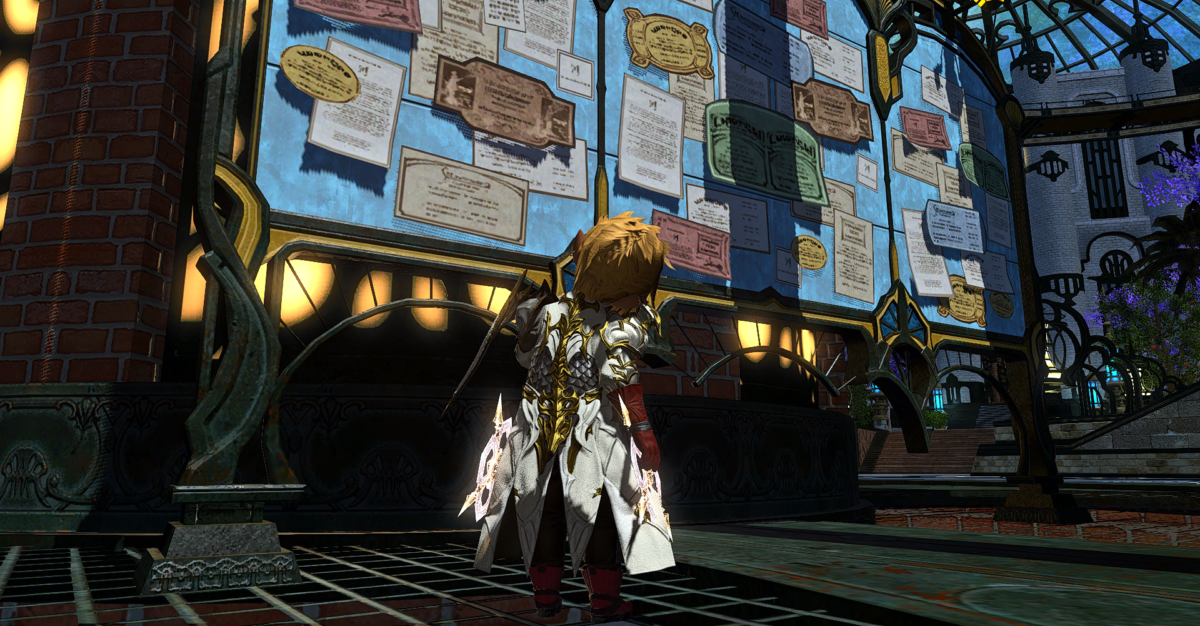 These methods are best for players looking for gil and gains,adventurers who don’t care about old content or carefully-crafted glamour sets.

This short list of what to spend your poetics on will net you a small but steady stream of gil, mats, and leveling gear.

Every method comes with its own balance between effort and profit; consider carefully before wasting your tomes or your time.

It’s OK not to maximize the gil-to-tomestone ratio when you consider how quickly they are earned doing regular battle content. 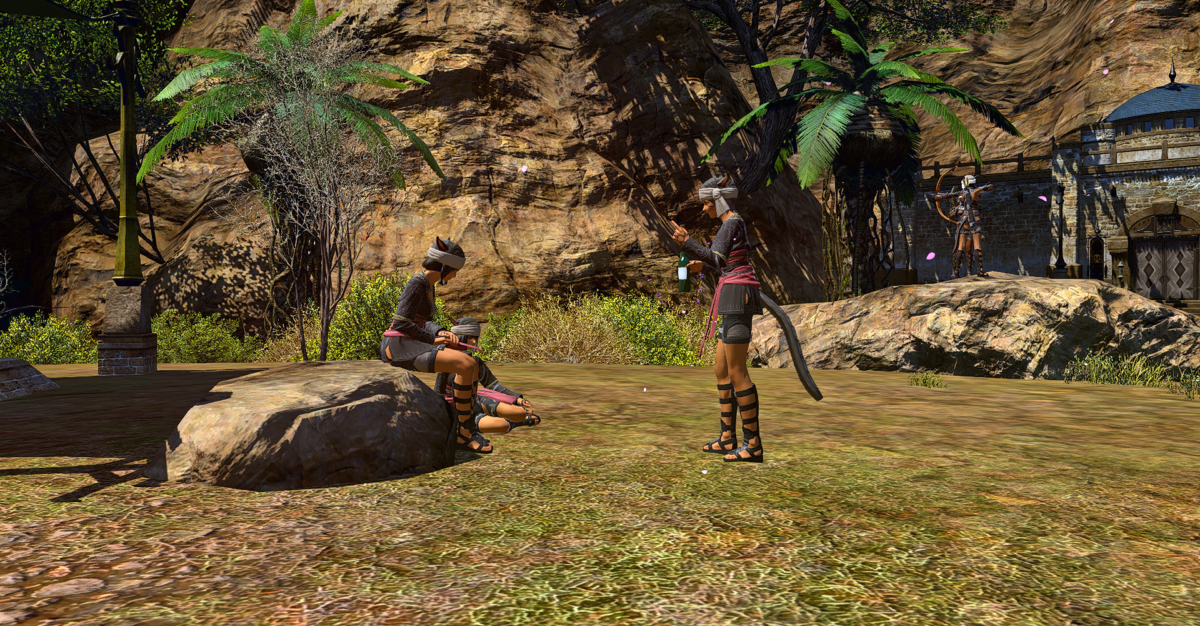 Consult the Market Board on your server and decide whether the going rate for Grade3 Shroud Topsoil and Grade 3 Thanalan Topsoil prices are healthy.

They’re usually worth enough to fund raid food and potions for casual players.

The vendor Bertana in Idyllshire will exchange an Unidentified Ore or Unidentified Shell for one of those two varieties of topsoil that you can turn around and list on the Market Board.

Unidentified Ore and Shell materials were mentioned above as part of the Anima Weapons section. Talk to Hismena, also in Idyllshire. 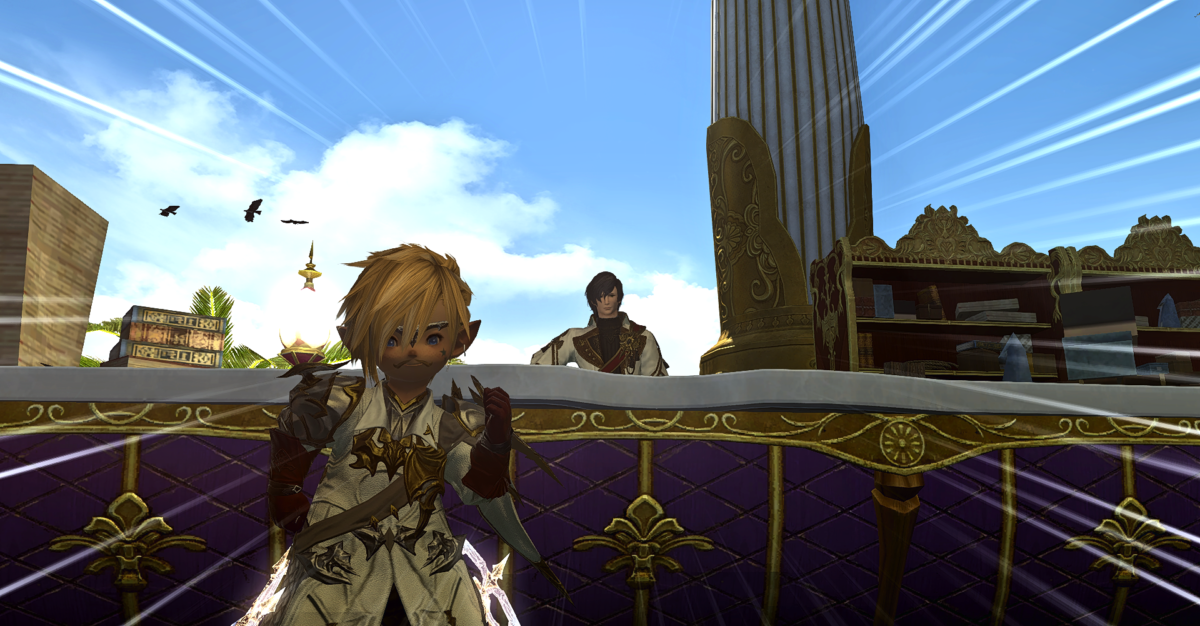 Since the release of the Endwalker expansion, the Tomestones of Revelation armor from the Eulmore vendor NPCs now cost Poetic Tomestones instead.

Each piece is valuable and comes with a high price which makes this method a quick way to utilize excess Tomestones.

There are two ways to use Cryptlurker gear as a resource.

Players can trade the individual pieces in for Grand Company seals or desynthesizethem to receive crafting materials and crystals.

Either method provides gil or resources in exchange for Poetics.

Desynthesis: This practice has the bonus of leveling up your desynthesis skills. The market board prices for the materials you will end up with vary from week to week; some will be worth selling, others worth vendor-ing.

If you have extra time, consider crafting things to sell with the fresh materials for a larger profit margin.

Company seals can buy a wide range of valuable items; look at the selection for yourself.

We like to purchase ventures and cordials since we do a lot of gathering and merchanting. Retainer ventures are sorely underrated.

There are other options that can be sold on the market board directly for less time investment but less profit.

Currently, Coke is the most profitable crafting material to buy with Grand Company seals on the Excalibur server, but other mats are not far behind.

Coke and other GC Seal items are used to create parts and supplies for Free Company expedition missions, a system many players overlook.

The Market Prohibited items that vendor for 360 gil are an excellent zero-effort choice for players that do not want to deal with selling on the Market Boards at all and will accept a lower profit.

Always do some market research before spending seals or poetics. Conditions change often. Eorzean economics is a subject best-learned firsthand. 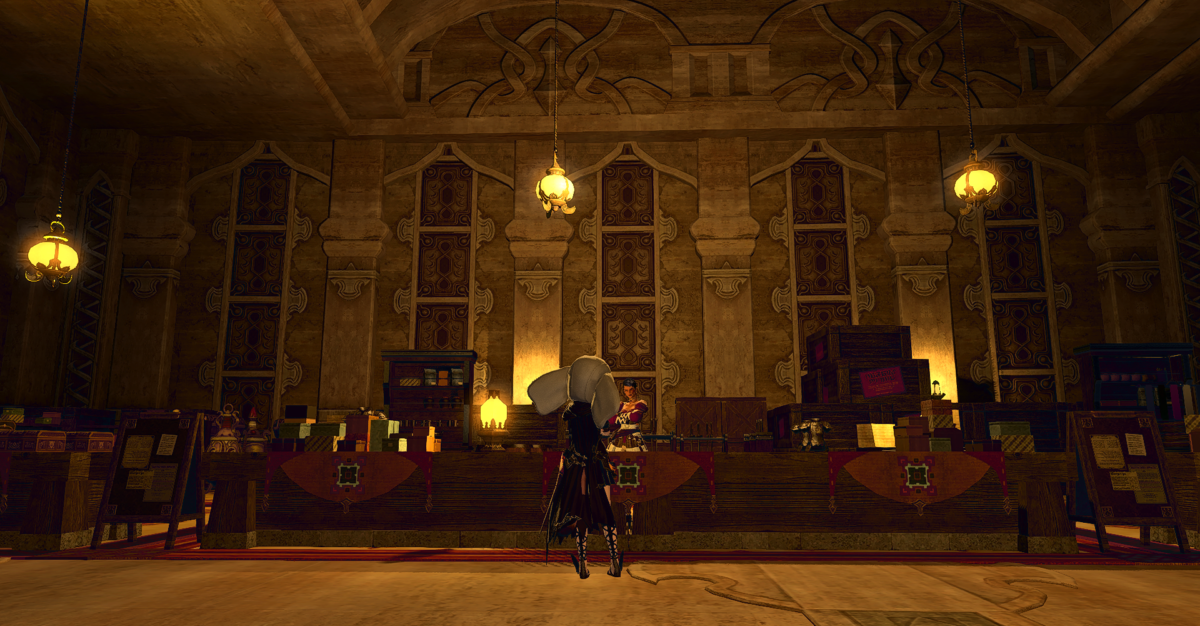 Players that don’t buy the level boosts from the FFXIV Online Store understand that having cruddy gear can make the leveling experience excruciating without the flow of equipment that comes from the Main Story Quests.

Allagan Tomestones of Poetics can be exchanged for updated gear at different level milestones on the path to level 90.

Without doing this, FATEs are more brutal than they need to be; some dungeons will be inaccessible to you, even some roulettes.

If you are playing a healer or tank, you might not be able to perform your role successfully; that feels bad.

The Market Board is hit-or-miss when it comes to leveling gear; it’s usually unavailable or overpriced as heck.

It’s not worth the cost unless you have millions of gil to spare. Everyone ends up with Allagan Tomestones of Poetics to spare, though.

The starting level for each expansion has its own set of gear, the previous expansion’s level cap. Starting at 50, there is a new item level baseline every ten levels.

These sets will provide your character with the item level they need to begin the leveling content for the following ten levels on the right foot; each set contains some good looking glamour pieces, too.

Ironworks gear brings a nostalgic magitech look, while some of the Shire hats look pretty dapper.

Hold on just one minute now, please… Is his name really Fathard? Fat Hard? Yeah, it is. Middle school must have been rough. 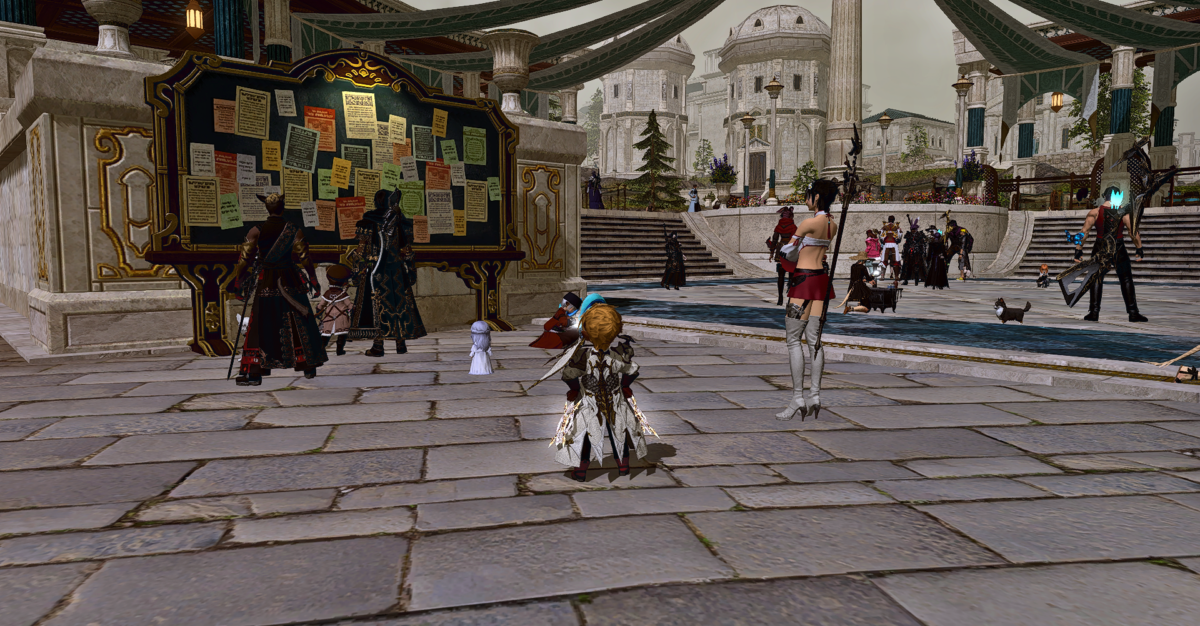 As Square Enix releases expansion packs, the old high-tier crafting materials switch from costing either of the two cutting-edge tomestones to costing poetics.

This opens up new freedom and possibilities for crafters and profit-seekers alike.

NPCs like Aymark in Eulmore and Rowena in Idyllshire sell mats such as Spirit Extract, Dried Hi-Ether, Eikon Metal, and Invisible Silk that use useful for the sellable versions of primal weapons as well as old recipes for leveling crafting.

The single best way to turn Poetics into gil is to utilize Aymark’s Shadowbringers materials to craft equipment to convert to Grand Company seals.

If you are a player with a max crafter leveled, check what you can easily craft with Aymark’s materials.

Crafted level 80 gear will yield more seals than turning in Cryptlurker gear at the cost of more labor and time. 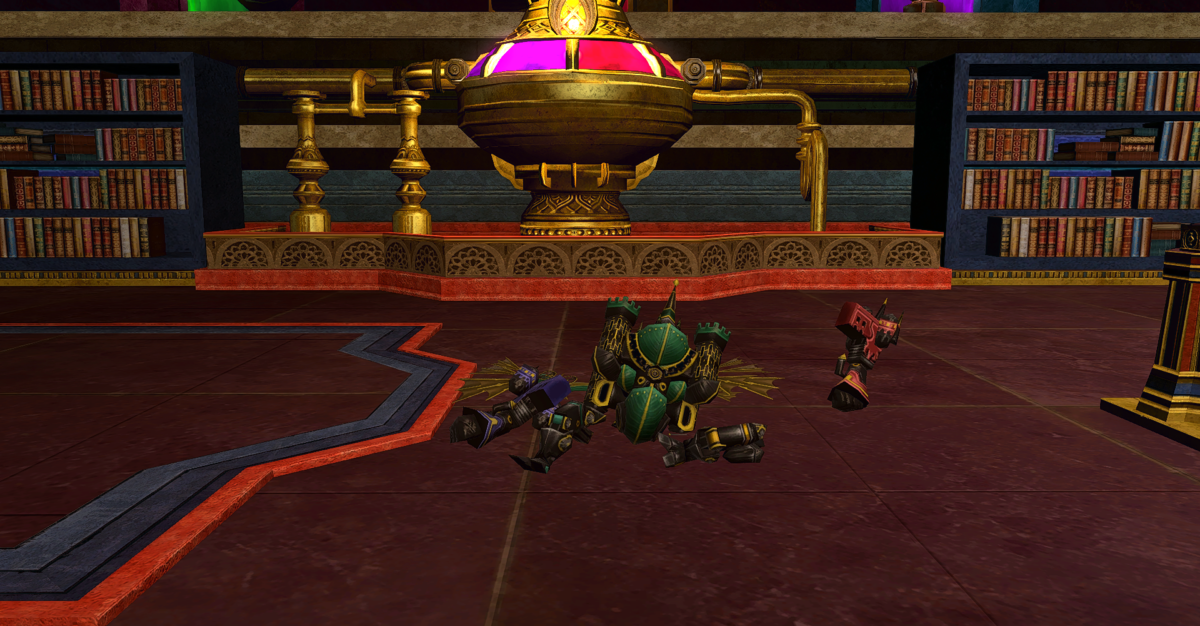 For players with max levels, all the Relic Weapons their heart desires, and enough gil to buy the Sultana of Ul’dah herself, there are toys.

Many of the Poetics vendors above sell fun little doodads and knick-knacks like minions, orchestrion rolls, and furnishings.

None sell for any reasonable price on any server but offer novelty and enjoyment for the time spent relaxing in the housing districts or waiting for queues/party finders to fill up.

Our favorite Poetic Tomestone minion is the Wide-Eyed Fawn from Auriana, but the Fledgling Dodo is a close second place. Music-wise, the Reflections Orchestrion Roll is a must-have for lore and good vibes enthusiasts.

Take a look at the selection and buy what seems fun! Minions make great gifts to newer players or FC members.

We want to hit this message one final time. It’s too easy to let your AllaganTomestone of Poetics total sit at the cap, causing all poetics earned to disintegrate.

The Poetics sink that takes the least amount of thought is turning Cryptlurker gear into Grand Company seals, turning those seals into Duck Bones, and finally, vendor the Duck Bones.

This results in a rate of a little over half a gil per seal; that’s not as small as it sounds.

Remember, you get hundreds, sometimes thousands, of seals for each piece of Cryptlurker equipment.

The best way to spend your Poetics in FFXIV is a way you will remember and enjoy; that’s the real benchmark.