Anime plays host to hundreds of tropes, genres, and archetypes – even popularizing some, like the Lolita fashion movement.

Today, I’ll be looking at 16 anime girls that fall under the poorly-defined ‘alternative’ umbrella, but specifically Gothic.

I’m going to make sure to only mention girls from anime that are great – I know there are a lot of letdowns out there! 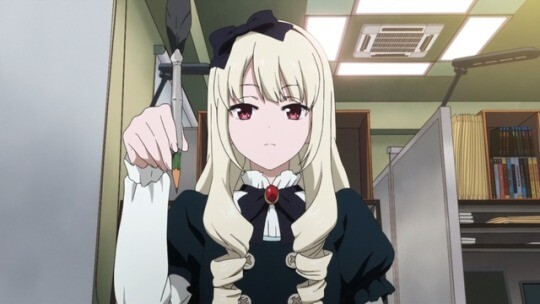 Rinko is a girl who dresses in Gothic Lolita clothing in SHIROBAKO, a show about five girls who once promised to make an anime together.

Rinko is a quiet girl who isn’t known for talking, but she is a talented animator who is admired by many, including one of the main characters, Ema Yasuhara.

Rinko’s gothic exterior was a result of her previous demeanor, where she would constantly say yes to people.

So, she decided to dress in Gothic Lolita clothing in order to become stronger and protect herself against criticism. 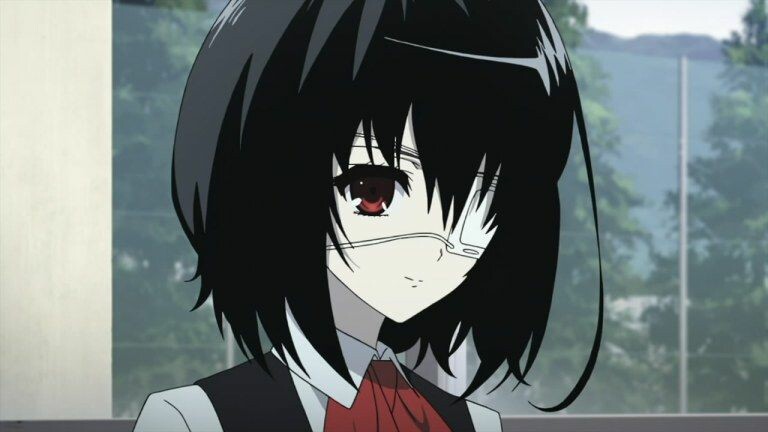 Mei Misaki is one of the lead female protagonists in Another, a horror anime that follows a mysterious calamity curse that haunts Class 3-3.

For most of the start of the anime, Mei remains quiet and ignores the main male lead, KouichiSakakibara. She does so to initially follow the rules of the class prevention measures but is also normally quiet and reserved herself.

She is also quite gloomy after the unfortunate death of her twin sister and her ability to see “the color of death.”

While she doesn’t dress in gothic clothing, her demeanor makes her a qualified goth girl in anime. 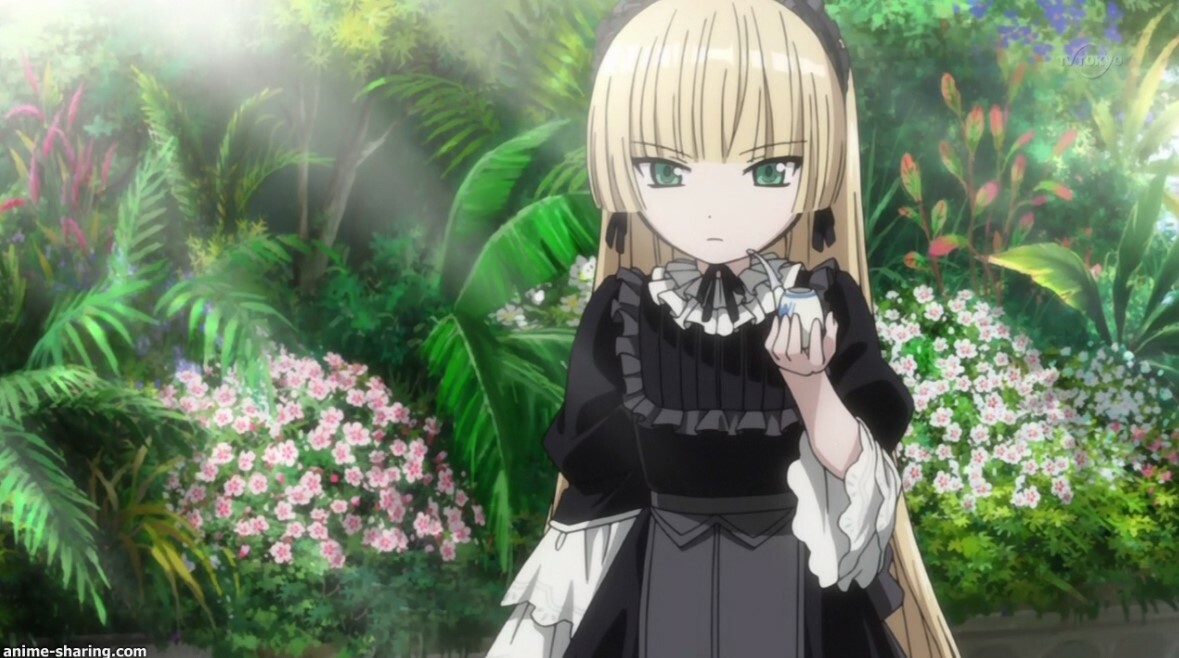 Victorique is a 15-year-old who was raised in solitude and mostly remained in the library of Saint Marguerite Academy. Gosick is a mystery anime that eventually discovers the secrets behind Victorique’s upbringing and family.

She is easily frustrated but quite intelligent. Victorique wears a black Victorian dress most often and is known to be sarcastic, blunt, and a bit eccentric with superhuman-level charisma and observation skills.

Although she is talented in solving mysteries and often presents confidence and eloquence, Victorique is also greatly anxious in social situations and is quite nihilistic. 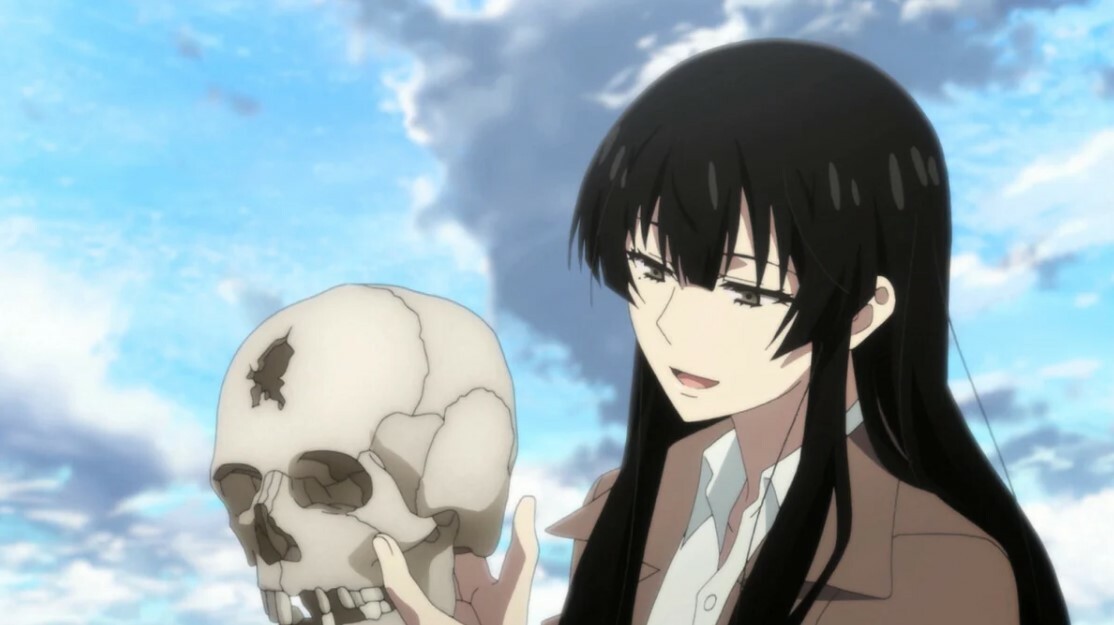 Sakurako is in her mid-20s and is a renowned osteologist and forensic consultant. Her home is adorned with skeletons and bones she personally cleaned and preserved.

She is described as cold, eccentric, and intelligent. Many characters also view Sakurako as a beautiful woman, aside from her sense of superiority and social aloofness.

However, she spends her time with a young boy who likely reminds Sakurako of her late younger brother.

With her passion and interest in mystery, death, and bones, Sakurako is the definition of what an adult goth would be. 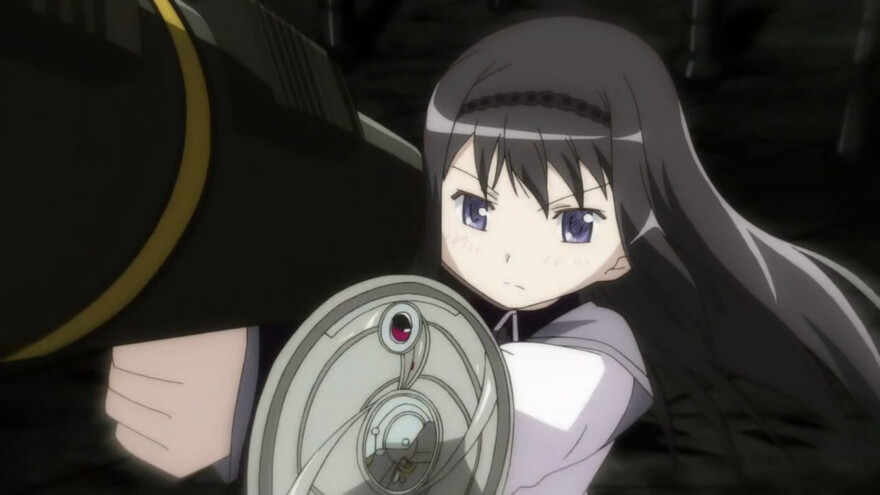 One of Homura’s hallmark qualities is her solemn downcast expression and matter of speaking.

Her Magical Girl form is far more befitting of her neo-Gothic sensibilities, with dark purples and greys blending into her black hair and stockings.

Studio Shaft paid attention to the design of every character in MadokaMagica, indicative of the shaded hollow and grey eyes Homura possesses.

Watch further, and you’ll realize precisely why that is – and why things like death are nothing but a commonplace in her life. 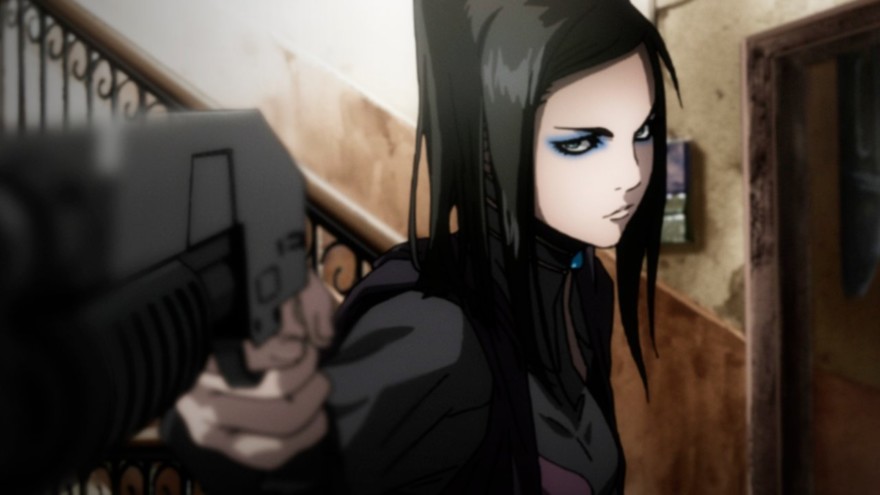 One of the best aspects of Ergo Proxy outside of the world-building is the stellar character design.

There is no anime that looks like it, and nowhere is that clearer than in the design and characterization of the enigmatic protagonist, Re-L Mayer, a solemn yet headstrong woman of 19.

Her amazing eye shadow really completes her cyber-Gothic aesthetic, giving her eyes a blue glow and pop in contrast to her drab, dark, and professional uniform. 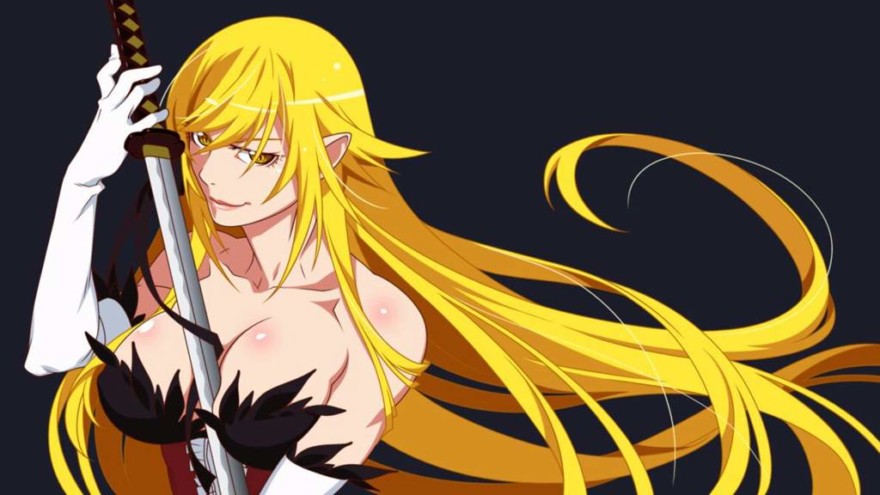 Yes, that is a mouthful of a full name. See, Shinobu is actually a 598-year-old Vampire.

In her traditional 8-year-old form, she is designed as cute and petite – but her true form is a voluptuous vampire adorned with Victorian garments and wielding a large katana.

She’s an enigmatic character who becomes fully understood as the series progresses but often lurks in the shadows. 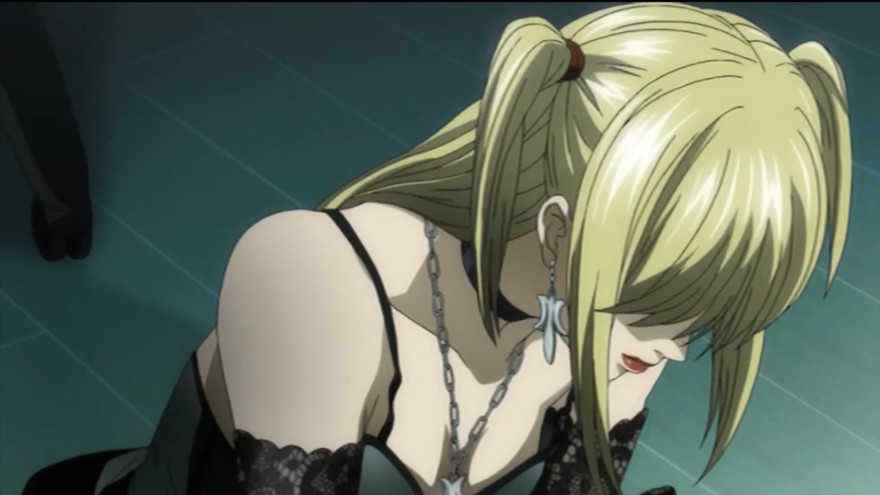 Misa Amane embodies the specific Gothic-archetype fascinated, or even infatuated, by serial killers.

She intentionally strives for the Gothic Lolita fashion style (due to her model career at the beginning of the series) and perfectly suits Death Note’s aesthetic.

Even Rem is enamored, though saddened, by her naivety towards death and murder. The last time we see Misa – in a still frame – perfectly embodies the Gothic Lolita style. 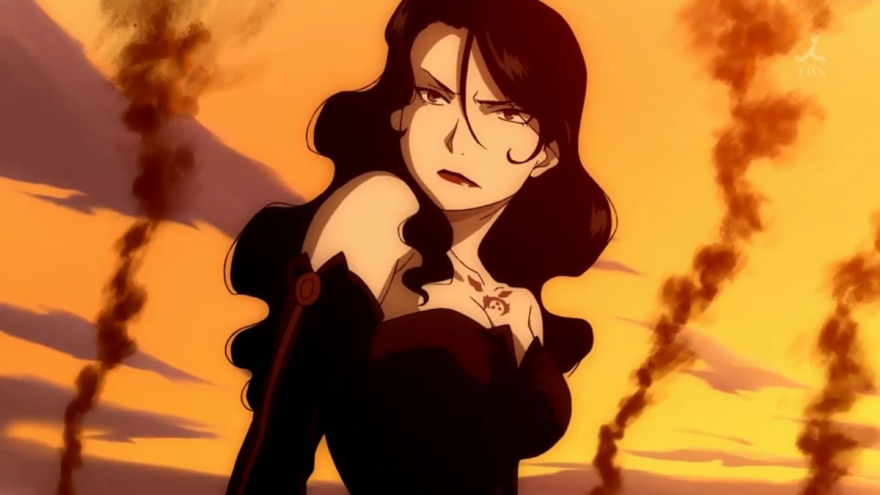 Lust is the embodiment of the sin itself, manifesting as a flirtatious though vicious antagonist partnered with Gluttony.

She’s entirely pale and dressed in a contouring onyx dress atop a flowing backdrop of black hair.

She’s shown to be sadistic and vindictive to the very end, though never hampered by her brain as she displays cunning intelligence among Father’s Seven Sins. 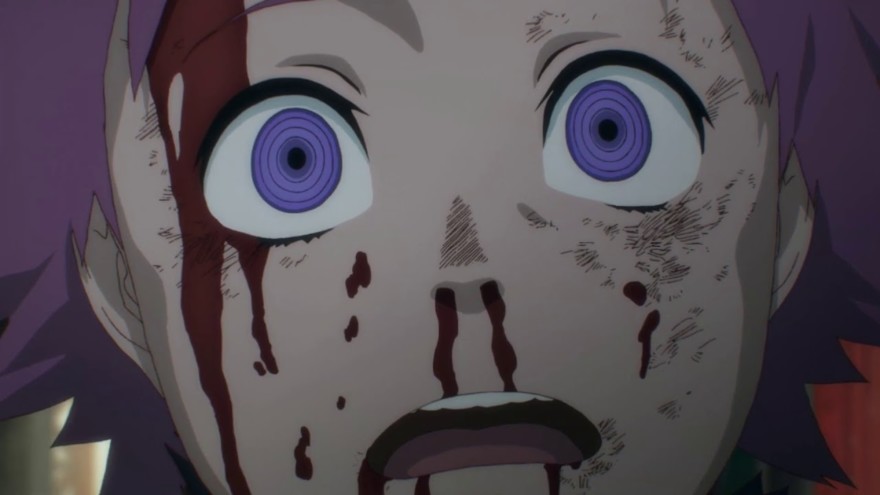 The first time we see Ebisu, she has her face ripped off by a horrific crocodile man and thrown into the antagonists’ lair without memory or… Well, face.

The majority of her screen time has her bandaged and masked up, but once we see her, she’s reconstructed to have stark purple eyes and hair and a youthful face.

Her outfit is very neo-Gothic, being entirely black and grey with buttons and buckles and wielding scythes. She’s rather androgynous, too, her gender a topic of speculation for a little while before being confirmed. 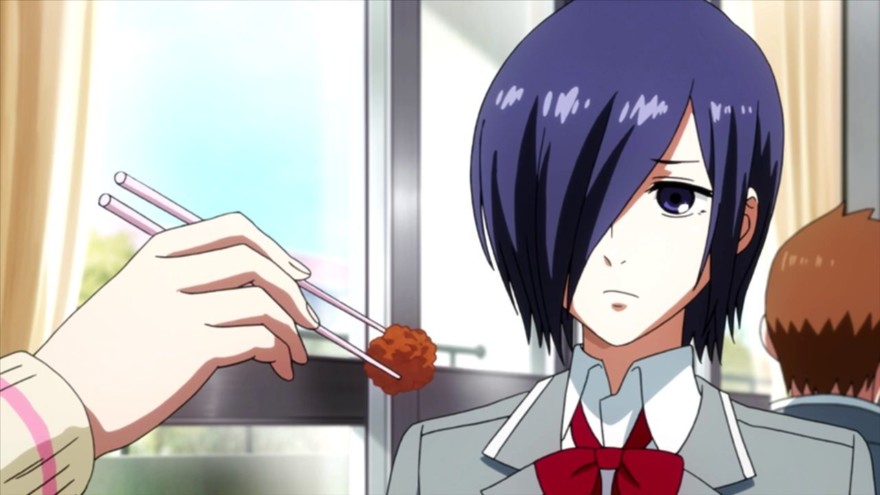 In Tokyo’s streets, Touka is known as the Rabbit due to her signature mask and agility.

She’s a ghoul fighting for the beliefs of Anteiku. She is an athletic girl with long purple bangs but is rather standoffish.

She is struggling from living in the Ghoul world and the Human world at the same time, yet still manages to graduate high-school throughout the course of the series and continues employment throughout her adult life.

Nonetheless, she is actually a kind soul struggling with intense abandonment issues and low self-esteem, and her character is a complex, respectable, and lovable one. 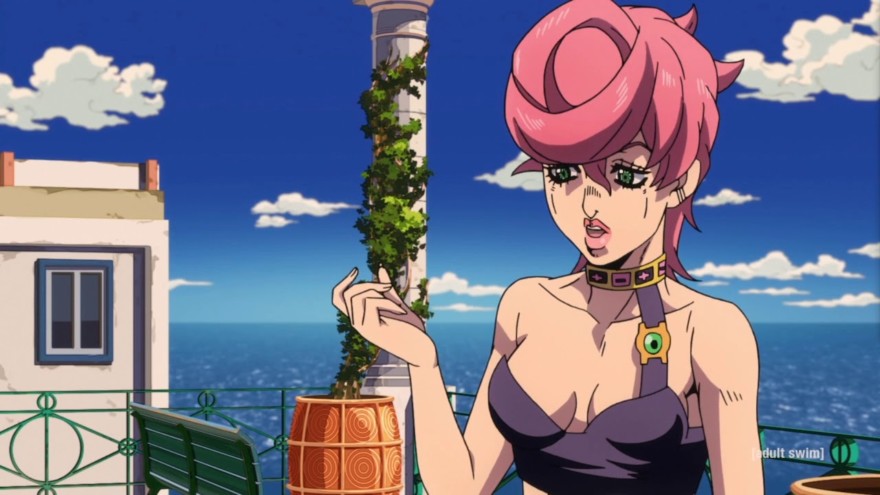 Trish is a complex character with a killer fashion sense. She’s the enigmatic daughter of the even-more-so enigmatic Boss of Passione, a mysterious figure the suspect of various speculation among the Mafioso rankings.

As such, she is targeted as a way of getting to the Boss, and her life was made a tumultuous, hectic, and isolating one.

In the beginning, she treats Bruno’s gang with disdain and disregard. But upon realizing how far they’d go to keep her safe, she manifests her Stand, [Spice Girl], that proves itself vital in the group’s progression towards her father.

Her aesthetic is amazing, with a numeric and mathematic motif adorned upon her skirt and a dark brassiere inspired by contemporary fashion models of the 80s and 90s.

She may fall more under Punk than Goth, but I like to think Trish (much like many of Araki’s characters) stray the line between aesthetic admirably! 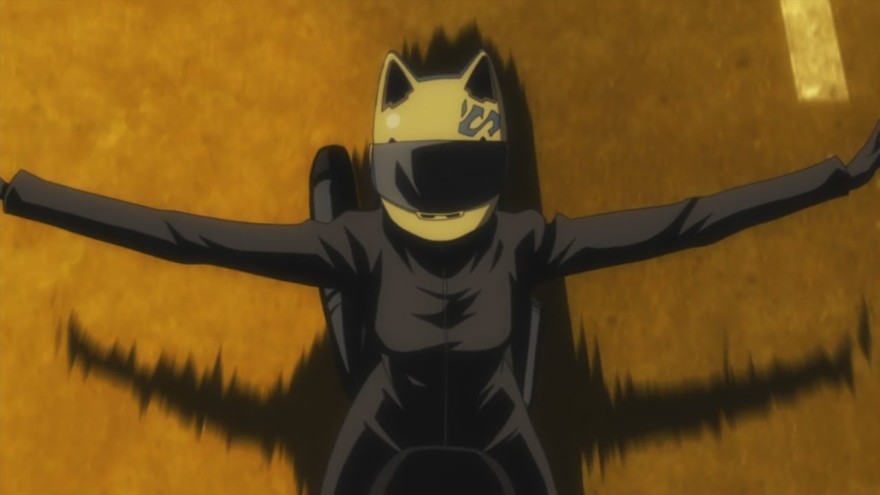 She’s got the nickname, ‘The Headless Rider,’ for a reason. Dressed like a motorcyclist, with a black biker jumpsuit getup and yellow helmet (vaguely stylized like a cat), and missing her head.

Yes, Celty is an Irish fairy called a Dullahan on a journey for her stolen cranium. She’s immortal, hundreds of years old, but updated her outfit from a horse-riding knight for contemporary Japan.

Despite this, and quite ironically, she has a very extroverted and preppy personality – though she commonly drifts into a dark discussion and has expressed having incredibly bleak thoughts. 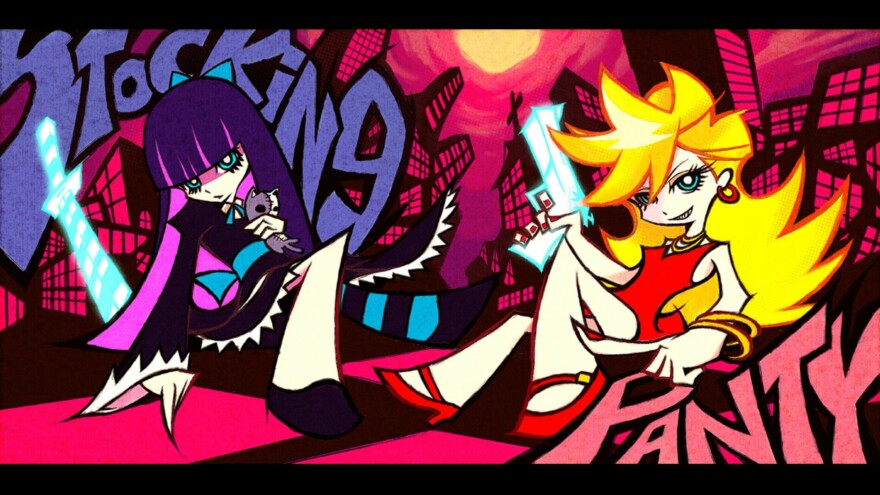 The other half to her preppy, sex-fueled sister Panty Stocking, Anarchy likes to think she’s everything Panty isn’t.

She dresses from head to toe in a Gothic Lolita style and wears her hair like a veil with massive bangs hanging down the sides.

She also often carries her cuddly toy, a decaying purple teddy bear. Stocking is very reserved but shown to have atypical perspectives on aesthetic, attractiveness, and human mortality.

In general, she’s quite edgy, screams the Goth Lolita aesthetic with absolutely no subtlety, and therefore deserves her place here! 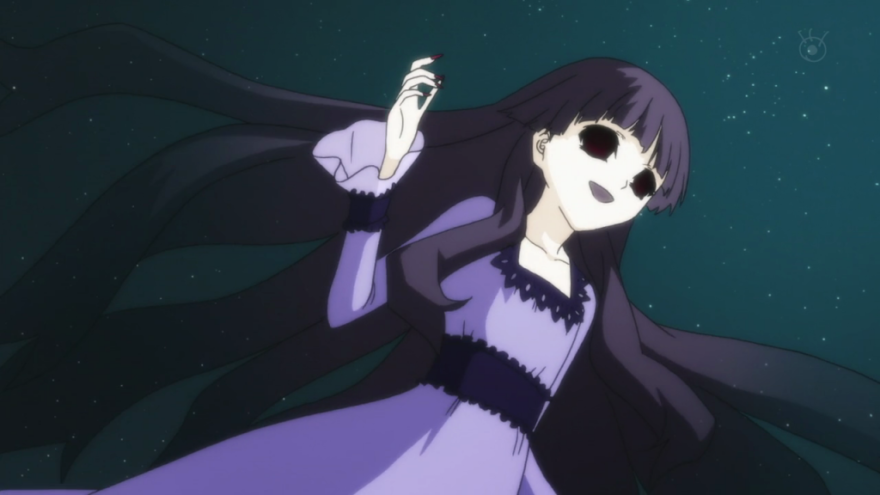 SunakiKirishiki is a shiki, the in-universe equivalent of a vampire often referred to as a demon corpse.

She’s considered the main issue behind the plague beguiling Sotoba resulting in many mysterious deaths and is demonized throughout the series.

By all intents, Sunako is the antagonist… Yet, she’s almost anything but, and that dilemma is the driving crux behind Shiki as an anime.

She’s more than a hundred-years-old and very kind, with a young appearance but a weak disposition and a fascination towards books and human culture.

She’s steeped in the Gothic, and her tragic narrative only heightens her characterization further. 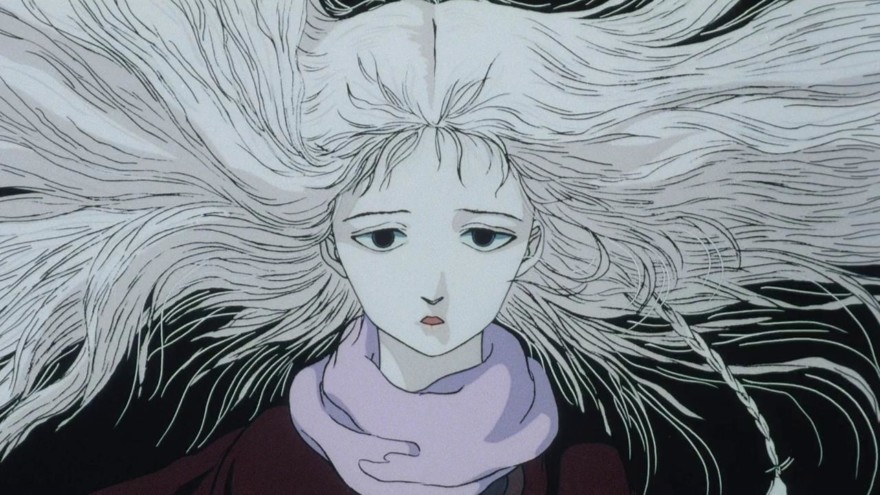 The Girl miserably carries a white egg every day, under the unfounded insistence it will soon hatch. She collects jugs of water and spends her days musing.

The aesthetic backdrop for Angel’s Egg is somber, and the narrative is rich in imagery and symbolism more-so than any story.

The dialogue alongside the scenes questions existence, reality, and theology, as well as the nature of death and life.

It’s a rather pretentious affair – and I’ll be putting The Girl in fifth place for similar pretentious reasons!

She’s dark, moody, forlorn, and forever trapped in a Sisyphean loop of her own making, stuck between the agentic and deterministic.

She’s not only a fascinating character but a beautiful one with a character design courtesy of the Fantasy Gothic artist Yoshitaka Amano (1001 Nights, Ayakashi, Final Fantasy). 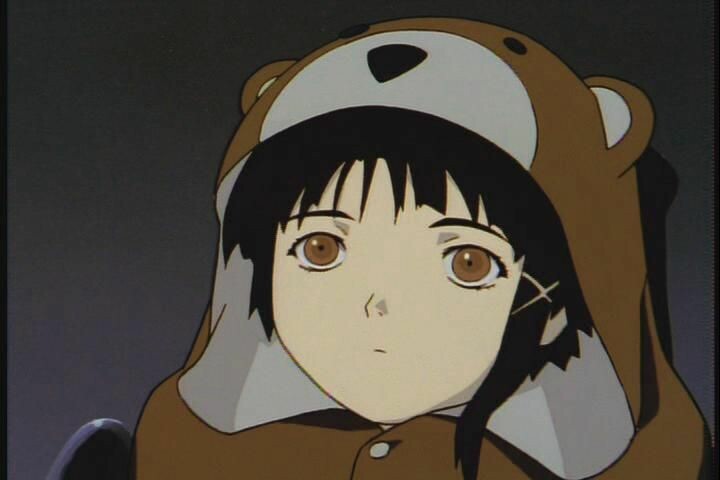 Similar to The Girl, Lain embodies a specific archetype of the cyber-Gothic, estranged from reality and detached from the tangible.

Her depersonalized, derealized personality is perfectly represented in the YoshitoshiABe design – a muted color palette, sad nihilistic eyes, and a seeming perpetual frown.

Lain is also as much an environment as she is herself, and the anime is soaked in Gothic undertones.

It questions religion, technology, the internet, social connection, anomie, and mental health decline in an electronic world. Lain – like the anime – is quiet and introverted, slow and methodic, and forever morose. 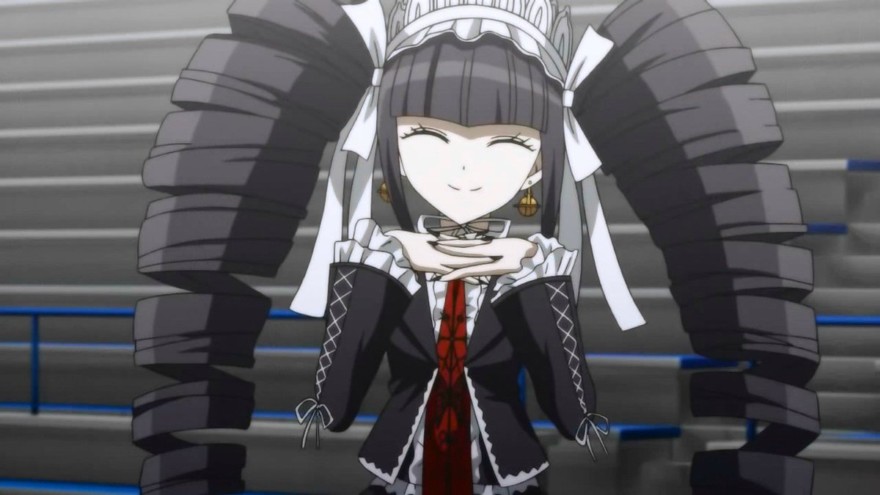 Has an anime character ever been this transparently Gothic? She’s the Ultimate Gambler, sadistically playing with the lives and financial livelihood of those who fear and adore her and gained a reputation for being a world-class liar.

Celestia’shair, twin-drill onyx pigtails, fall down the sides of her courtly and regal posture.

Her outfit comprises of a traditional Gothic Lolita black, and white dress adorned with various schoolgirl aspects such as a blazer and tie. 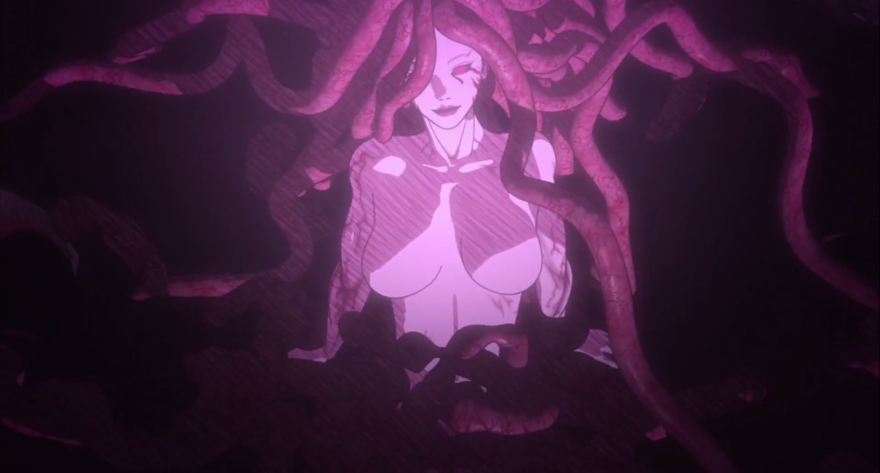 Slan is the only female member of the God Hand, and I believe perhaps unintentionally personifies the Gothic best. No surprise, considering she is from the best Gothic manga available, Berserk.

She exhibits a sadomasochistic tendency, often violent beyond the extreme with those she vanquishes purely for the shock-horror of the ordeal on any watch.

She has a sexual fixation on torture and anguish and a complete disregard for any sanctity for life.

Her design often portrays her as completely naked, sometimes obscured somewhat by great bat-like wings emerging from her back.

In Miura’s lavishly detailed artwork, there’s a particular care for the imagery drawn alongside his characters, and Slan is no exception.

She is often given dark, nightmarish, even Lovecraftian backgrounds, and her parts often display some of the wickedest psychosexual horror peppered throughout Berserk. 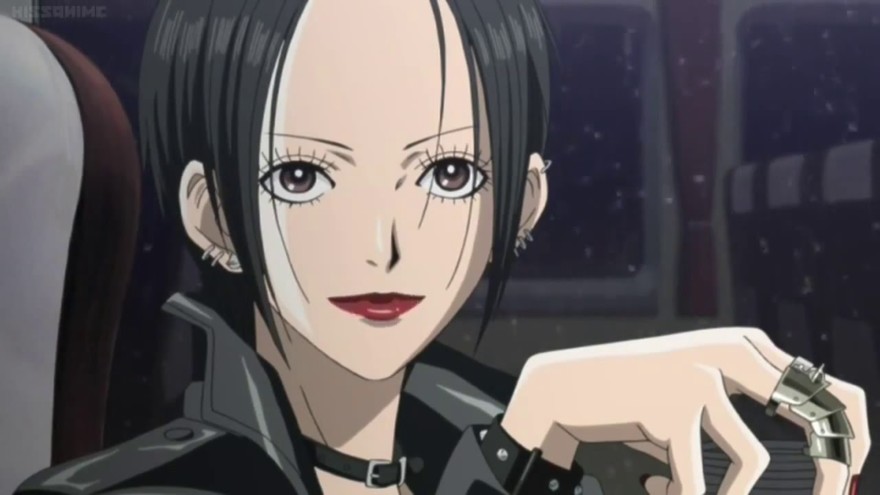 Nana is one of the two protagonists of the series Nana alongside another, completely different girl, called Nana. Confused? Be at ease, for upon watching, it is simple.

She’s the lead vocalist of an up-and-coming punk band entitled ‘The Black Stones’ and carries a lot of trauma with her, which she lets out via music.

She was abandoned quite a lot throughout her life, manifesting as an abandonment issue that maintains throughout the series.

Despite this, she’s incredibly strong and smart and doesn’t let anybody push her around. She has a tattoo – small lotus flower – and smokes like a chimney, often morosely or in the bath.

Her aesthetic is unmistakably Punk-Gothic through a Japanese lens and perfectly suits her personality.

Despite her gloomy backstory and appearance, she’s ultimately kind and loving to her friends.