As you make your way across the island of Tsushima, you’ll find a great number of charms, each one of which has different effects on Jin’s abilities.

Most of the Major Charms can be obtained by paying honors at the various remote shrines scattered across the island, though a few only become available once the player has reached certain ranks. These charms are based on omamori, real Japanese charms sold at shrines or temples, believed to grant different kinds of protection and good fortune.

At first, these charms can feel a little out of place. After all, Ghost of Tsushima is a game set in a very historically accurate recreation of feudal Japan steeped in a tone of gritty realism; charms with seemingly supernatural effects can feel rather like they’re going against the general spirit of the game.

You won’t be questioning their presence for long, though, as you’ll soon find out that they’re an invaluable part of balancing out your character’s abilities and overall build.

In total, you can equip 6 charms (found on the Gear menu). You can equip 2 major charms and 4 minor charms. When you start the game you will have limited slots and these can be increased by finding Inari Shrines. There are 49 of them in total and they can be found by following the fox when you come across a Fox Den.

Ghost of Tsushima is, of course, still a pretty new game, and people are still finding all the secrets and figuring out the best builds and playstyles; but we’ve listed below the ten charms that we, at least for now, consider to be the best in the game.

Like many games of its kind, Ghost of Tsushima allows the player to collect materials as they play; these materials, in turn, can be used to upgrade their armor and inventory. However, if you’re to fully upgrade your equipment, you’re going to need a substantial amount of material.

The Charm if Inari greatly cuts down the amount of time you’ll need to spend collecting resources by increasing the amount you receive each time you gather them. This applies to predator hides, bamboo, yew, and various other supplies.

The charm can be found at the Arrow Peak Shrine, which is located atop a high peak to the north of SakimoriOverlook in the Izuhara region, accessible in Act 1. 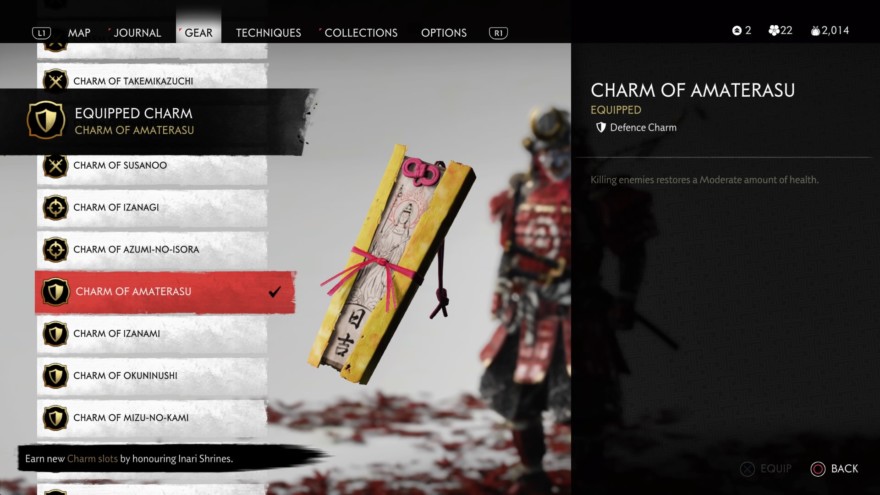 The Charm of Amaterasu, in brief, restores a moderate amount of health to Jin with every enemy he kills. We probably don’t need to explain what a life-saver this can be, especially when facing off against an especially sizable horde of enemies or during a lengthy battle, when an occasional boost to one’s health while it’s being chipped away at can be a life-saver.

The charm can be found at the Golden Summit Shrine, south of the Golden Temple in the Izuhara region, accessible in Act 1. 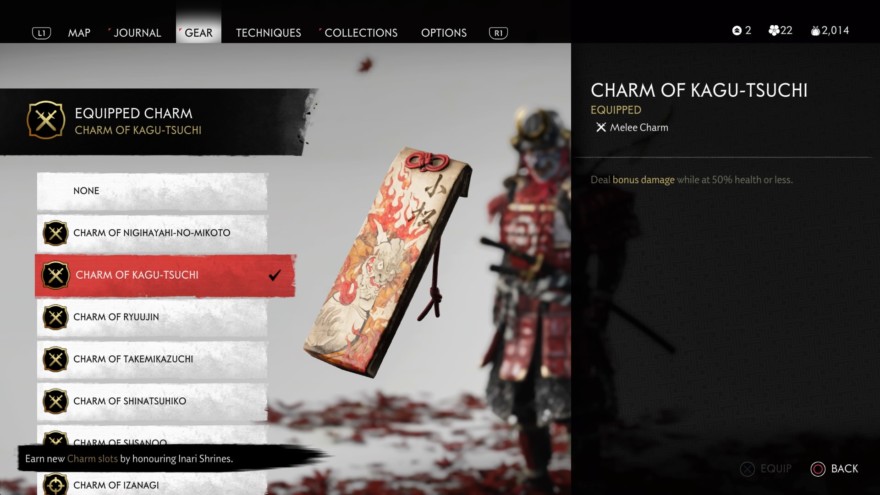 Another one that’s tremendously useful when facing off against sizable hordes or laying siege to Mongol camps, the Charm of Kagu-Tsuchi, allows the player to inflict bonus damage once their health drops below 50%. Needless to say, this could give the player an edge that turns the tide of battle once things start looking grim.

The charm can be found at Plum Blossom Shrine, which is located on Shigenori’s Peak in the Izuhara region, accessible in Act 1. 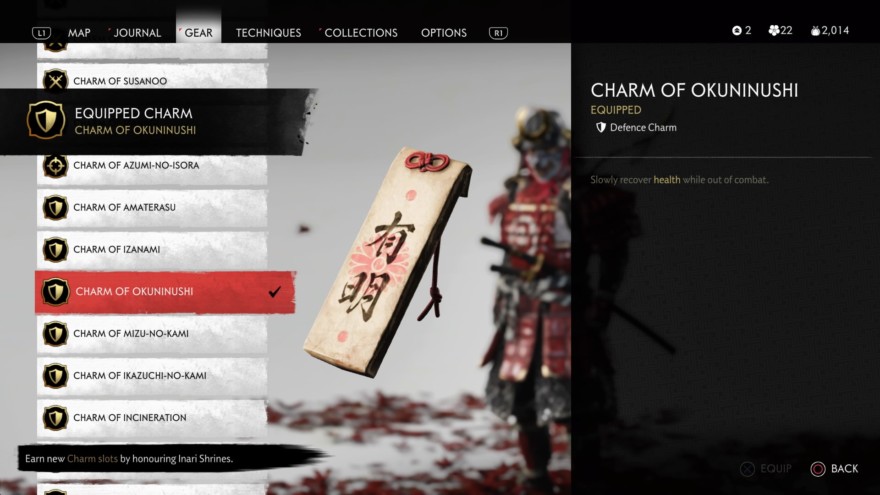 The Charm of Okuniushi, or medicine, appropriately enough, slowly heals you while you’re out of combat. It’s a pretty simple effect, but invaluable on a lengthy trek across Tsushima, as it allows you to easily prep for your next battle without forcing you to drain your Resolve.

This charm can be found at the Mending Rock Shrine, which is accessible in Act 1, located on a small islet in the Izuhara region, connected to the Isonade Coast by some rickety bridges. 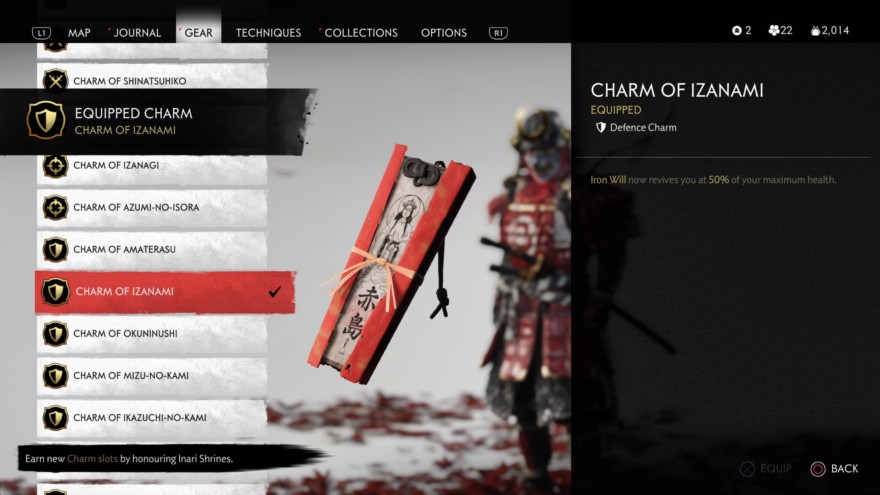 As many Ghost of Tsushima players have found out by now, the “Iron Will” skill allows Jin to recover from a mortal wound, at the cost of Resolve (precisely how much depends on what difficulty you’re playing on).

It’s tremendously useful for those times you find yourself unexpectedly overwhelmed, and your health gets drained before you have a chance to heal yourself. Unfortunately, used on its own, the ability recovers Jin with almost no health.

The Charm of Izanami rectifies this by granting Jin 50% health when he recovers with Iron Will, thus increasing your chance of actually turning the tide of battle (or at least offering you a better opportunity to run away) once he recovers.

This charm can be found during Act 2 at Marsh Rock Shrine, which can be located by following a road northeast of Akashima Village in the Toyotama region. 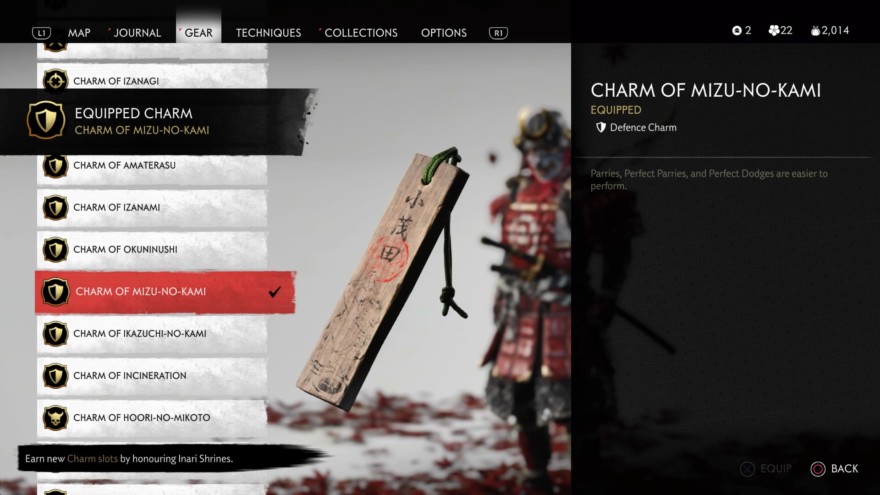 If you favor a melee playstyle in Ghost of Tsushima, you’ll quickly learn that you won’t survive long by charging headlong into battle and slashing mindlessly. You need to be strategic and utilize your ability to parry and dodge blows carefully in order to survive.

However, the parry and dodge mechanics can take some serious getting used to, often requiring extremely precise timing. The Charm of Mizu-no-Kami can be invaluable here, as it expands the window for parries and dodges and makes them a lot easier to execute.

This charm can prove extremely useful when you’re still getting used to the nuances of melee strategy in Ghost of Tsushima, and once you feel that the charm has given you a bit more confidence in your dodge and parry skills, you can always swap it out for something else.

This charm is found at the Spring Falls Shrine, the entrance to which is located just north of Kuaki’sFalls in the Izuhara region and can be accessed in Act 1. 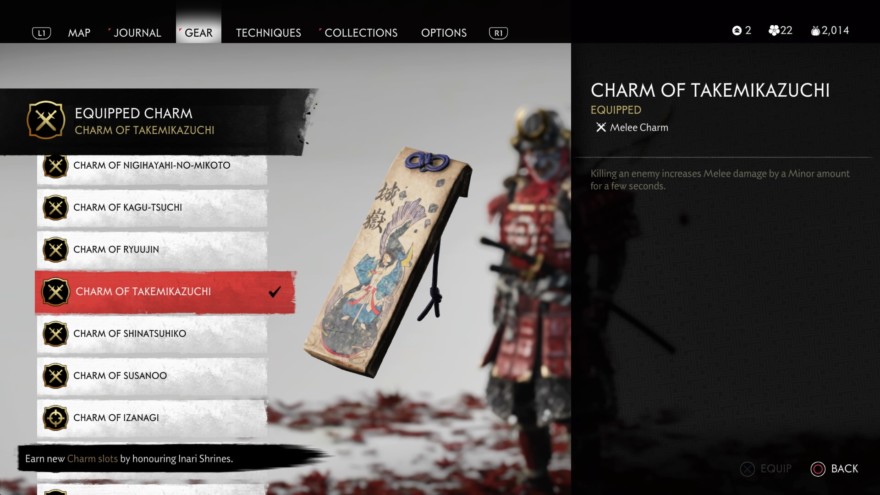 Another charm highly useful to players opting for a melee-heavy playstyle, the Charm of Takemikazuchi, briefly increases your melee damage by a small amount every time you kill an enemy.

This is yet another charm that could well save your life when you’re facing off against a sizable horde of enemies – once you’ve killed your first enemy, you can get some serious momentum, giving an extra edge to your next few attacks, and perhaps even getting a chain effect going if the other enemies are sufficiently injured already.

Utilized properly, this charm could allow you to chop down an entire group of enemies in seriously reduced time.

This charm can be found during Act 3 at the Snowlit Peak Shrine, which is located in the Kamiagata region north of Mount Jogaku. 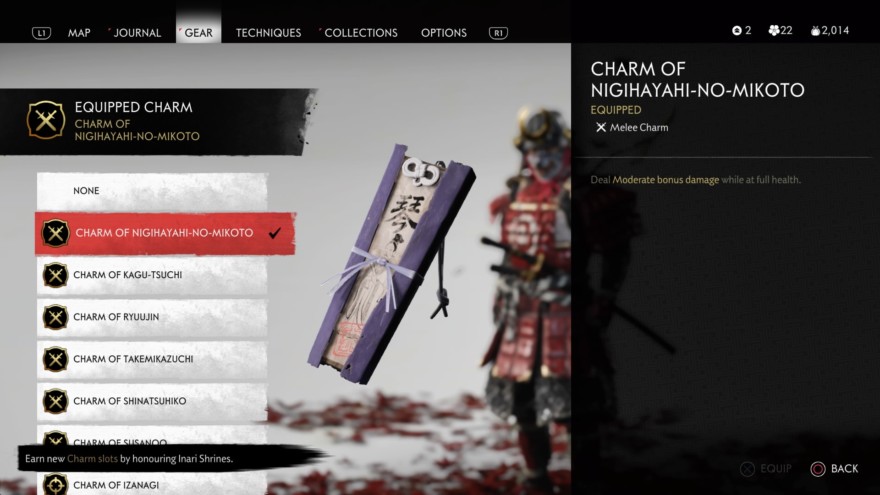 The Charm of Nigihayahi-no-Mikoto allows Jin to deal a moderate amount of bonus damage while he’s at full health.

The charm is accessible during Act 3 and can be found at the Frozen Cliff Shrine, which is located along the southeast coast of the Kin prefecture in the Kamiagata region. 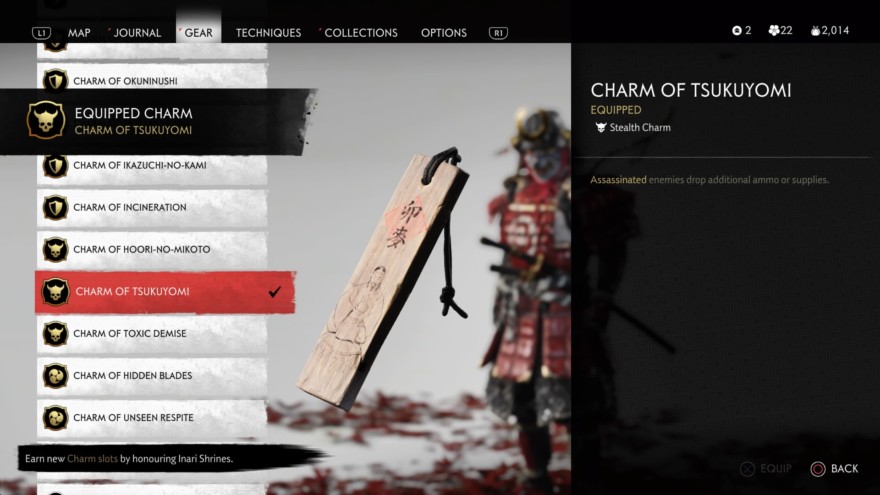 A certain way into the game, once the map opens up and the player can roam freely, the story mission “The Warrior’s Code” will introduce the player to the stealth kill ability, which lets them take down unaware enemies in a single swift attack.

It’s up to the player whether they’ll opt to use this particular approach frequently (after all, the game makes it clear that Jin is uncomfortable doing so since it goes against the code of the samurai); but if they do, the Charm of Tsukuyomi can come in very handy. With this charm, enemies who are stealth-killed drop higher amounts of supplies and ammunition.

If you utilize the stealth kill approach consistently, this charm will do a lot to help build your supply stash in the long run, since not only will you receive more after every battle, but you won’t have to exchange them for ammunition quite as often.

The charm can be found during Act 2 at the Scarlet Rock Shrine, which is located in the Toyomata region in the middle of the Umugi prefecture, south of the Field of the Equinox Flower. 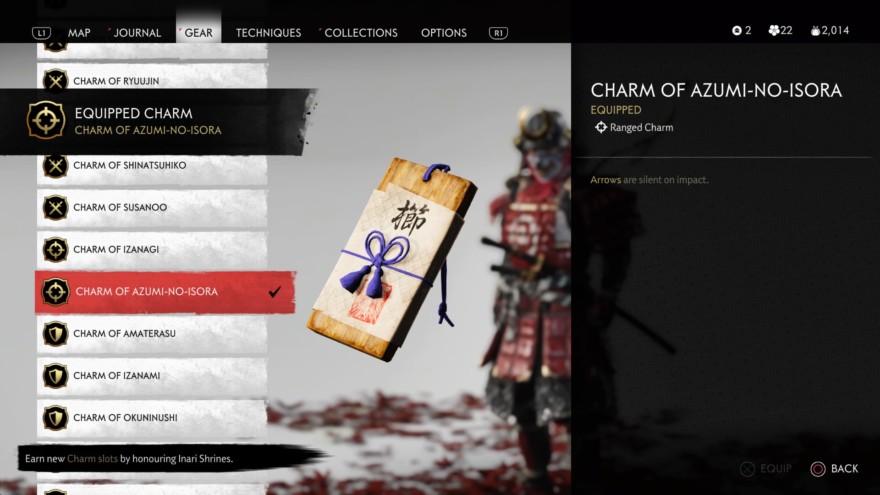 The Charm of Azumi-no-Isora makes arrows silent on impact. This simple effect can prove invaluable to players taking an approach that relies heavily on ranged combat, especially when laying siege to a camp or other large group of enemies.

With this charm, the player can take down individual enemies from a distance with a lower chance of alerting their nearby companions, thus reducing the chance of being swamped and having to defend themselves with their less-honed melee skills.

This charm, which is accessible in Act 2, can be found at Cloud Ridge Shrine, which is located in the Toyotama region, along the coastline to the east of Koshimizu Farmstead in the Kushi prefecture.

Hot Tip
These charms listed here, by the way, are just the Major Charms – there’s also a ton of Minor Charms (most of which are given as rewards for completing side quests) that have lesser effects which, paired up with the right Major Charms, can make for an extremely powerful character build. In short, there are a whole lot of charms to choose from, each one with its own benefits.

It’s ultimately very much up to you which charms you feel suit you best, depending largely on the playstyle you opt for in-game. Whichever charms you happen to choose, though, your journey across Tsushima is bound to be a tale worth telling.