Sucker Punch Productions, known for its amazing games such as the Infamous and Sly Cooper series, comes with another visually satisfying, incredibly good, and well-designed samurai-inspired historical action game, Ghost of Tsushima.

The game features several skills and techniques as you progress through the main storyline. In this list, you’ll see which of the skills are beginner-friendly and will help you identify which ones you should prioritize early on and which skills are the best to get while you’re at it.

Before we get into the Skills, you must first learn about the different Stances in the game. Sword Stances are the most integral aspect of playing the Ghost of Tsushima.

The Stances you will use will determine how fast or how good you’ll do in each encounter. The Sword Stance you use will either help you or slow you in combat, rendering you ineffective against certain types of enemies.

Of course, you can just hack through them like a hot knife cutting through butter, but choosing the correct Stance according to enemy type will help you in most encounters with little to no difficulty. 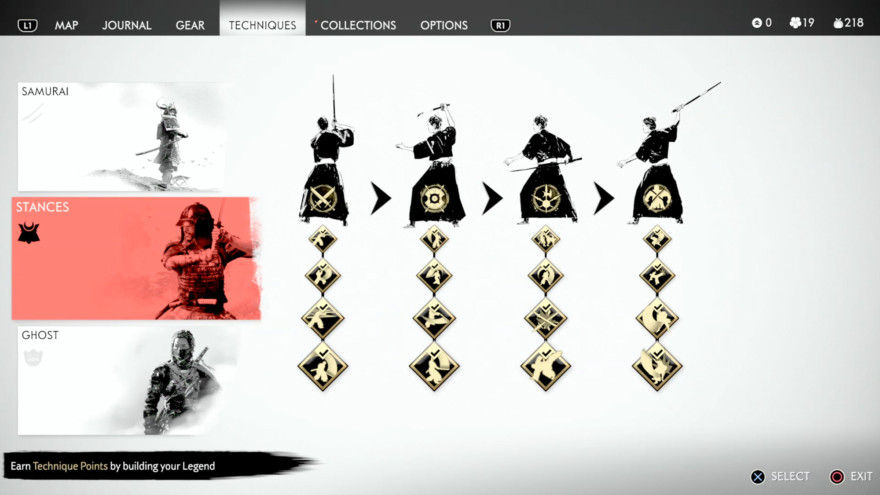 This is your default stance when starting the game. This Stance is very useful early on since most of the enemy types you’ll encounter in early Acts are pretty much the same enemy type, which is a Swordsman. To add up:

The Stone Stance is composed of four (4) moves, which are:

You will not hit harder or attack faster since the only Stances’ passive skills only affect their respective heavy (Triangle) attacks.

This is one of the Stances you can unlock as you progress further into the game. Water Stance attacks are good against enemies with shields, and its shield breaker attacks are wide sweeps that could hit multiple enemies at once if they grouped a little bit too close together.

A little bit of a downside to this Stance is that your wide, heavy attacks are slower than the Stone Stance.

Timing charge attacks go together with this particular Stance as you benefit greatly from the Stagger damage it gives PLUS the raw damage you can inflict once you break their defenses.

Tapping Triangle once and again (pressing and holding it for a few frames), then continuing to tap four (4) more times, you’ll be able to execute an attack longer than the Water: Flowing Strike. As for the skills in this Stance are as follows:

Water is a really good Stance but isn’t really comparable to Stone Stance. It’s better to switch Stances in-between fights. Personally, I prefer the Water Stance a little bit more than the rest of the Stances because of how smooth you look with each attack.

The Wind is another good Stance, which is an effective skill for both crowd-control and spearmen. The animation for its charge attack covers a large distance to compensate for its slow animation. You can chain it with the Flurry Strike for a really smooth and fluid attack combo.

The Wind Stance is composed of four (4) skills which are:

For me, Wind Stance isn’t the most practical one to use for most fights since some of the moves in this particular Stance can leave you open for attacks. It isn’t necessarily a bad Stance, but you might find it difficult to progress in most encounters if you use it all throughout.

The Moon Stance has four (4) skills in its tree, which are:

The Moon Stance is a decent Stance, but it isn’t really the best one out there, at least in my experience. The Spinning Strike doesn’t interrupt most attacks, compared to the other three Stances, but the Stagger damage you can deal while in this Stance is a win compared to the Wind.

All in all, switching to various Stances depending on the enemy or your playstyle plays a big part in being a good fighter. Play multiple Stances, combine them, and see what suits your playstyle. 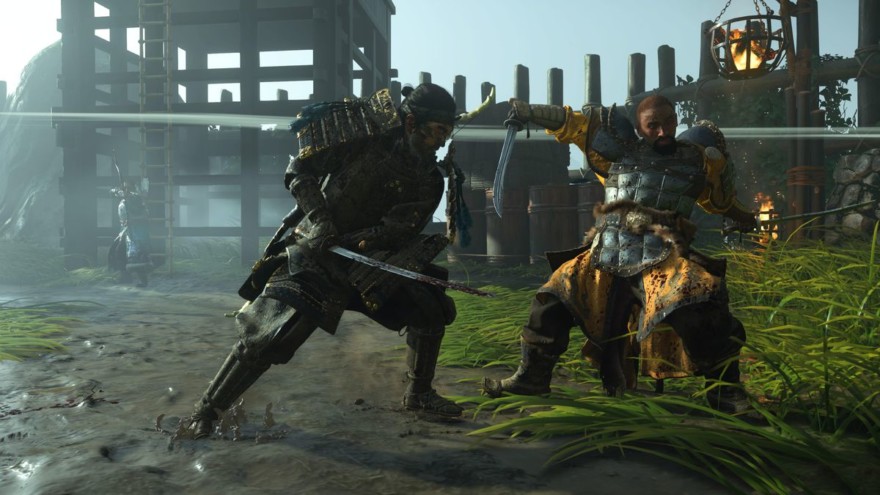 Early on, you’ll want to put a technique point here. It’s a move that you can use to deflect attacks and do a counterattack. It’s very useful if you’re not so keen on killing enemies as fast as you can.

If you learned about the Wind Stance’s Spear Defense already, then the counterattack makes it easier for you to do. From here on, you’ll want to invest more in the Unyielding Sword Parry.

Unlocking this ability means that you can now parry sword attacks as well, especially those unblockable strikes. It’s also useful against groups of attacks that will damage you simultaneously if you aren’t paying attention because of the visual cues it gives you, like:

And speaking of dodging, the third skill is called Roll.

A go-to skill if you want to dodge attacks or close the distance without being attacked. You must learn Perfect Parry and Roll FIRST, before investing in any other skills as it will help you in early missions.

Very effective against Brutes since not only you’ll avoid their attacks, but you’re also able to give a clean swipe.

As the name suggests, it’s a move to dodge and perform a counterattack, which usually insta-kill your enemies. You can unlock this later on, but it’s not really a priority. It cheeses the game’s difficulty, so using it less can make the game more challenging.

It gives you a moderate amount of Resolve so you can perform high damaging attacks from the Mythical Arts. And speaking of Mythical Arts, that’s the next skill you’re gonna put your focus on unlocking. 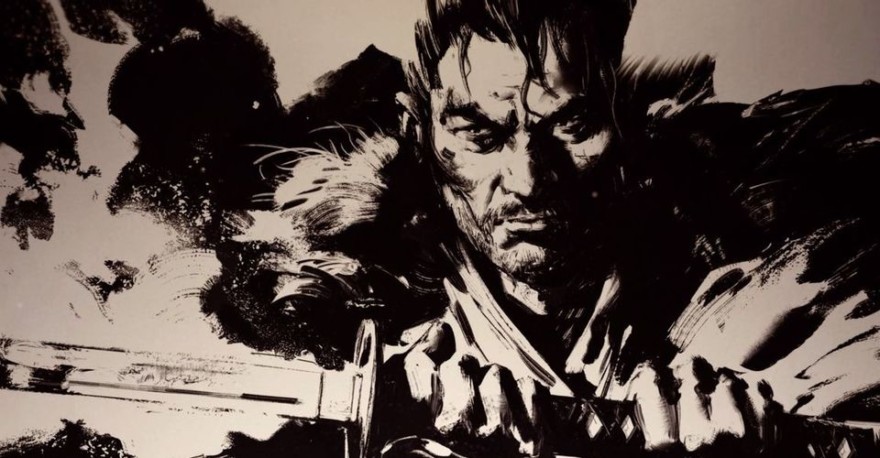 Mythical Skills are unlockable moves that are present in the game throughout your playtime. There are four (4) of them, and they’re a pretty strong move and very flashy as well. This guide will help you on how to unlock all of them.

A very powerful and swift sword strike that will see you cutting through 2 or 3 more enemies in one quick attack if they’re in a very tight space. It’s also advised that you should break your enemies’ defense-first before pulling this out.

Once you’ve broken through their defense, you can now use Heavenly Strike to pull a very flashy move that will almost instantly one-shot them.

The longbow and explosive arrow are an extremely good weapon against a group of enemies. Not only will it deal explosive damage, but it will also ignite them if they didn’t die from the explosion.

The longbow is also a better bow than the half-bow since it’s good for sniping heads and can pierce a few inches of armor whereas a half-bow cannot. It also breaks their guards when it explodes and knocks them down if you shot them directly.

Easily the best and the most stylish Mythical Art out of all the four. What it does is basically an unblockable lunge attack that will see you dashing and striking through 3 enemies in the most satisfying way possible.

It’s also good for dealing with enemies that are too far from one another as the dash you’ll do will be good enough to close the distance as well as to kill 2 or 3 people at once. You can also use this against Brutes and bosses to deal with a large sum of raw and Stagger damage.

Way of the Flame

Way of the Flame is a Mythical Art that allows you to drench your katana in oil and ignite it. Each strike with this Art will set enemies to flames and break their guards rather easily.

Note: All Mythical Arts have a chance to terrify enemies with each kill. The Way of the Flame’s oil and explosive arrows can be upgraded for increased capacity. 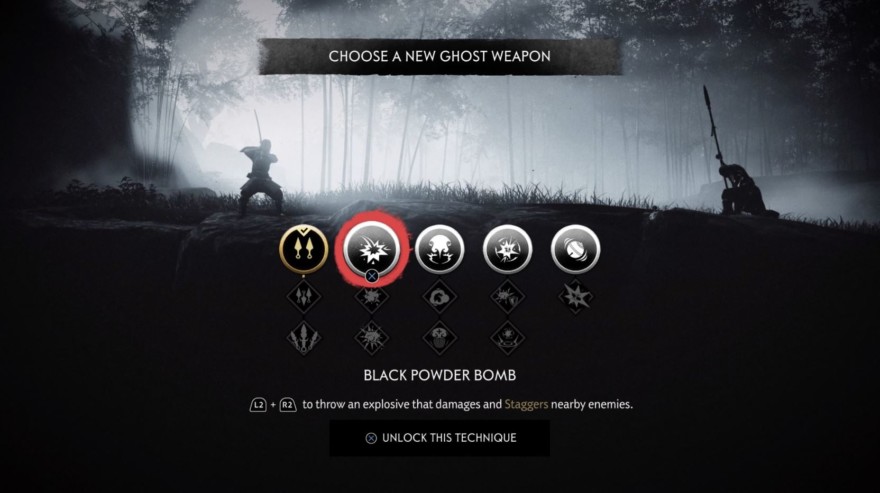 These skills mainly revolve around being a shinobi and a lot more on quick and stealthy kills rather than fighting head-on, using special tools and moves.

Throw a small blade that Staggers enemies. If maxed out, it can kill enemies instantly if they’ve taken damage already.

Wind Chimes are good for drawing one enemy towards the noise and firecrackers for multiple enemies. Firecrackers go well with the explosive arrow.

Pretty useful for escaping enemies when you’re in a pinch, otherwise a good distraction for a perfectly good situation to perform Dance of Wrath and Heavenly Strike combos without interruption. Upgrade it to blind enemies. Max upgrade restores some of your health.

These are the skills you’ll be learning as you progress through the storyline and side quests. It will help you with fending off enemies easily, even without the Mythical Arts.

Recover Health and Iron Will

Extremely useful on Hard mode. It isn’t really needed much in Easy and Normal mode, especially if you’ve practiced the Stances and Skills well enough.

You can one-shot enemies using this skill. It’s very effective, even against leaders. In most cases, you can even eliminate an entire patrol of 5 men by wearing the upgraded Clan Sakai Armor, and you’ll get a trophy for eliminating 5, which is “All in the Wrist.” It also gives you Resolve for each successful Standoff.

Archery allows you to use the bow to its full extent, and Concentration will help you with a bullet-time feature so you can land headshots, which you will probably miss without it.

Maxing this skill tree will grant you the ability to do a dive roll once you land from a rather dangerous height, as well as the ability to chain assassinate up to 3 enemies at once.

If you stealthily approached an enemy leader and killed him, you can one-shot 3 more enemies during your Ghost Stance. If you max this skill tree, you don’t have to kill a leader cautiously, you can just kill 7 enemies without taking any damage, and you can enter Ghost Stance.

That pretty much sums up all of the stances and the best skills to get in Ghost of Tsushima. You can unlock ALL of them, but for the most part, you only need to get all of these skills in this list, and you can pretty much progress in the story and finish it without having to get all of the skills, although you’ll be missing out.