There’s something very special about building a truly spectacular tower in Minecraft.

Partially, of course, because building a functional tower in the game takes some serious effort and planning, but also because there’s just something so very satisfying about standing atop a tower and surveying the map.

It really gives you the feeling of having conquered at least a portion of this hostile world.

But what kind of tower to build? Architecturally speaking, there are so many different kinds out there, and thanks to the highly versatile nature of building in Minecraft, almost all of them can be emulated to some degree in-game.

As mentioned, though, tower construction involves a particular amount of planning and effort. As a result, many players like to seek out a blueprint to work off of.

Below, we’ve listed twelve of our favorite blueprints for towers in Minecraft. 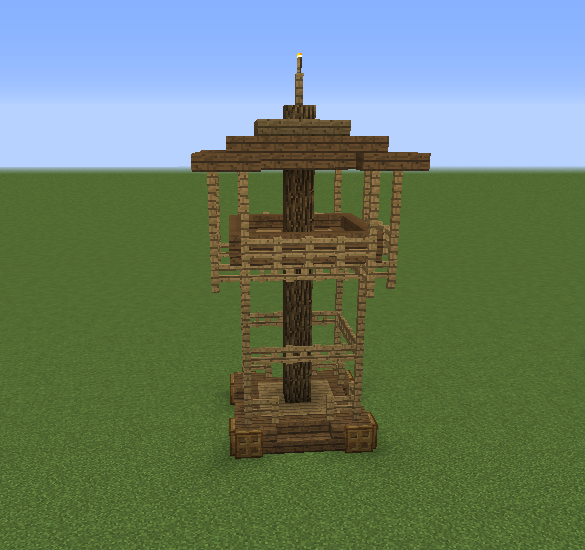 If this is your first time following Minecraft blueprints, you’ll want to start with something simple, like the Archer Tower.

As the name implies, it’s a simple structure, requiring only a few kinds of wood, that’s great for keeping an eye out and firing off shots at approaching foes.

Since they’re so easy to make, they can easily be placed across the map at regular intervals, giving you a great many defensive points to set up in should you suddenly find mobs bearing down on you. 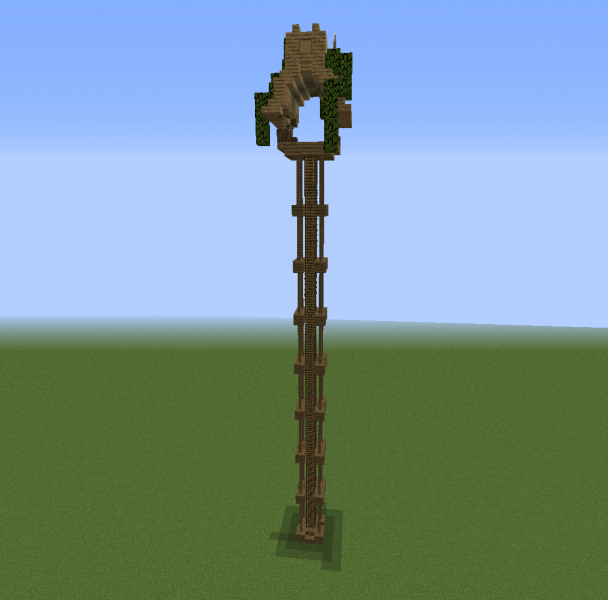 Another watchtower and defensive point, the Fantasy Tall Watchtower, is an…unusual sort of tower, with a very skinny, minimalistic look to it.

Scaling it is apt to be a bit riskier, but like the Archer Tower, it’s quick and simple to create and is great for ensuring you have defensive spots to set up if you’re ever under siege. 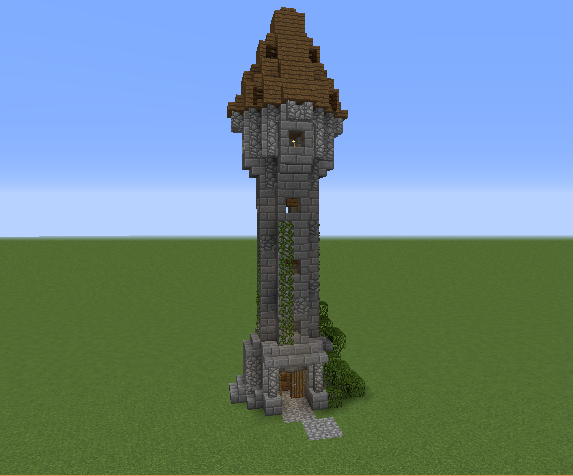 Sure, vanilla Minecraft doesn’t have magic, but tons of mods add to the game. And heck, even if you’re not using any of them, the Mage Tower just looks nifty as heck.

Not very colorful from the outside, sure – it’s mostly just stone brick – but its design has a classical fantasy look to it that directly calls to mind a white-bearded wizard firing bolts of magic from atop it.

This, combined with its cozy, vaguely mystical interior décor, makes it a nifty choice for anyone who wants to give a bit of flair to their defensive points. 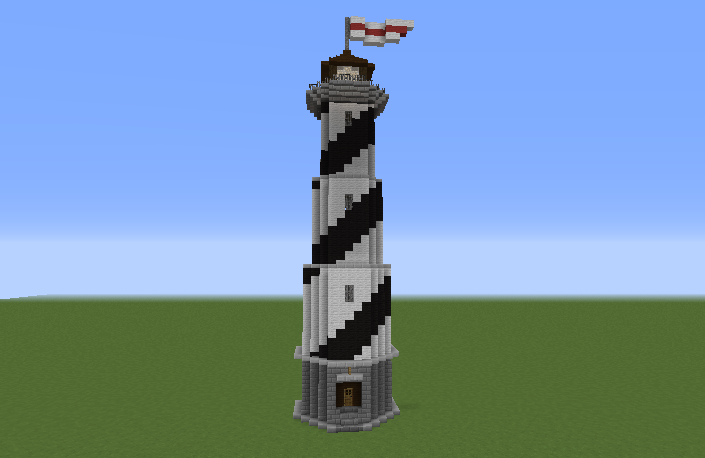 There’s a couple of different blueprints for Minecraft lighthouses out there, but Lighthouse 1 is our favorite.

It’s a rather sizable piece of work (and it requires, besides the usual stone and wood, a sizable amount of wool) that’ll probably take a while to get done, but it’s the one that looks most like an actual lighthouse.

Setting one up on a shore near one of your villages is a great way to create the impression of a romantic, thriving community. 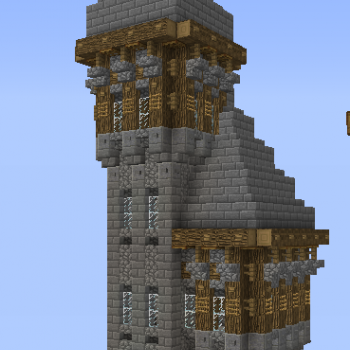 Keeping with the lighthouse theme, the Medieval Harbour Tower is another tower to put on your shoreline to really give your settlement the impression of the bustling industry.

As the name implies, this one has a medieval theme to it, and it’s mostly stone with some wood.

Not visually exciting, perhaps, but when paired with other buildings, it really can be a great way of making your world feel alive and advanced.

And, well, if you don’t have a watchtower set up, it can also be great for defending your town from any water-based attacks if you should happen to be on a server with hostile fellow players. 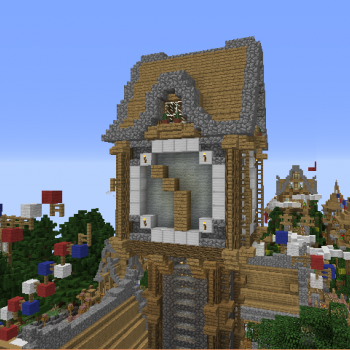 And speaking of nostalgic structures, there’s also the Clock Tower. Constructed chiefly of oak, setting up this construct to tower over your village is another great way to make it feel like a classic countryside community. 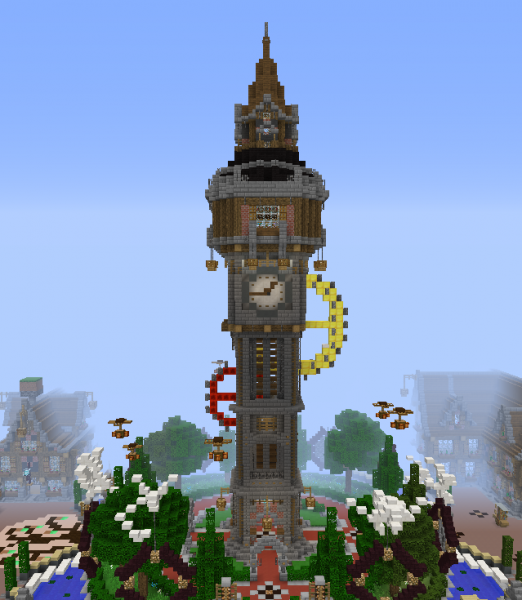 And if that last blueprint has you deciding that you like clock towers, you might want to try your hand at something a bit fancier. Enter the Fantasy Clock Tower.

As the name makes clear, this much more elaborate clock tower has a much more fantastical vibe to it. It’ll take a fair bit longer to build than the last one, mind, but it gives your town a fantastical charm. 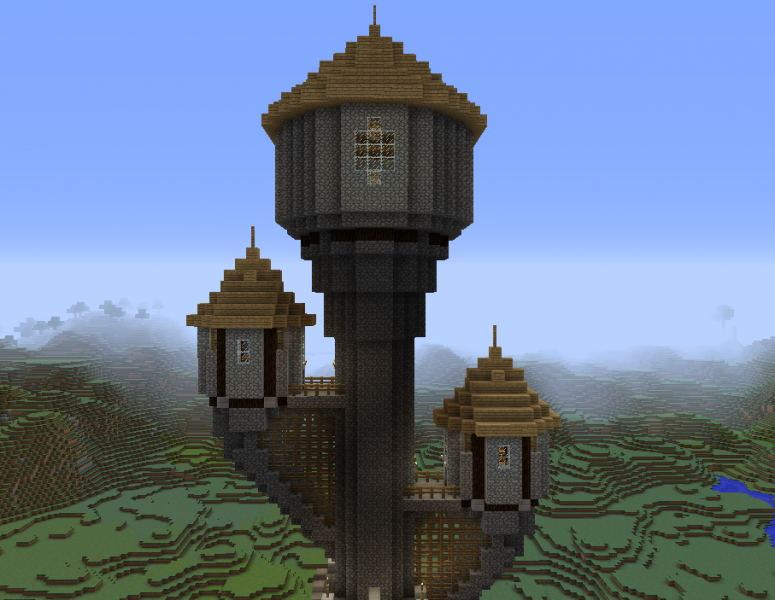 There probably isn’t a word for just what this kind of tower is, aside from “really cool.” Three Towers is, technically, one tower, with three separate heads to it, plus a full set of interior decoration.

It just looks so incredibly unique – fantastical, and really quite beautiful. It’s really the best way to give your particular Minecraft skyline its own very unique look. 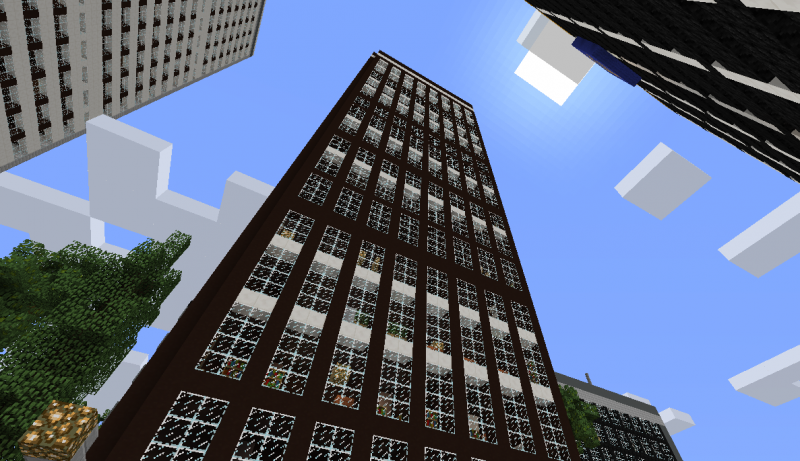 But enough of the more old-school and fantastical towers; what about something a bit more modern?

The Downtown Office Building 1, as you might guess, is a blueprint for a very contemporary-looking office skyscraper, complete with interior décor that really evokes the modern workspace.

The thing is tremendously tall, and needless to say, it’s going to. It’s a simple geometric design, though, and you’ll chiefly just need clay and glass.

Either way, build a dozen or so of these, and you’ll give your Minecraft world a proper urban skyline. 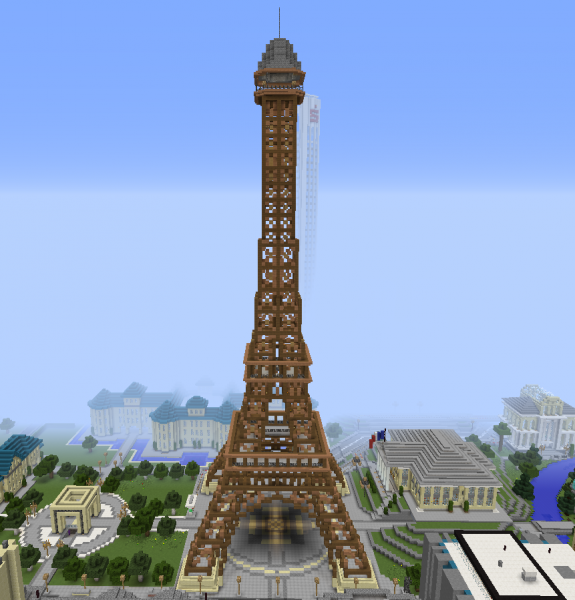 Yeah, that’s right, someone created a full blueprint for recreating the Eiffel Tower in Minecraft. It’s made chiefly of wood, so it’s a bit browner than the real thing, but otherwise, the resemblance is uncanny.

It goes without saying that, with all those crisscrossing beams, this one is going to take a while to set up, even with the blueprint.

However, if you should happen to be ambitious enough to try and recreate Paris in Minecraft (and there’s plenty of blueprints for other French-style buildings out there), or even if you just want to bring a bit of real-world iconography into your game, this one might well be worth attempting.

Just be ready to invest some serious time. 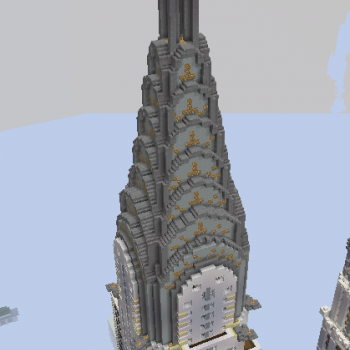 Yeah, we’re moving on to the really ambitious stuff now. If the Paris look isn’t your thing, there’s also a blueprint for New York’s Chrysler Building, complete with its distinctive Art Deco tip.

This one needs wool, and a lot of it, so it may take you a while to gather the resources and a while longer to build.

But really, constructing something as visually striking as this, the effort is more than worth it.

The interior isn’t included in the blueprint, but that just makes it perfect for the Minecraft player who’s looking to get experimental with interior décor. Plenty of room to experiment, after all. 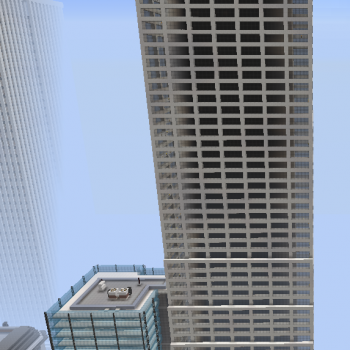 This blueprint, which recreates the 50-story WR Grace Building in New York, requires more blocks than anything else on this list (most of them quartz or glass, for that slick modern look).

It’ll take a while to build, of course, and it’s pretty simple in design and color.

However, the way that it’ll absolutely tower over your map, and probably be visible for miles, will be a constant reminder of just how much creative freedom and power the game of Minecraft gives its players.