There is something incredibly alluring about anime girls with guns. Their strong personality and impressive physical abilities make them a force to be reckoned with, regardless if they are with the good guys or the villains.

In this article, we’ll pay tribute to 15 of the best, baddest anime girls with guns. 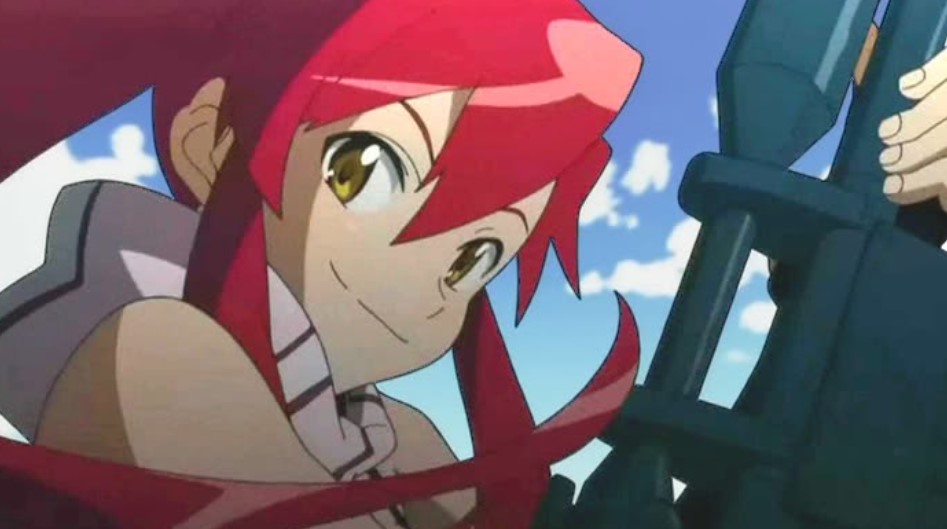 Yoko Littner is one of the main protagonists and a character who is not only mature for her age but also knowledgeable about survival tactics. She can keep a level head in any situation, which is helpful when she’s behind her sniper rifle.

Snipers need to have a trained eye and know when to take the shot, which is prominent in Yoko, who prefers to think about every angle and possibility before taking the leap.

Yoko is also protective of her friends, so when her friends were in need after she left and became a school teacher, she was willing to dust off her rifle and return to her rifleman title. 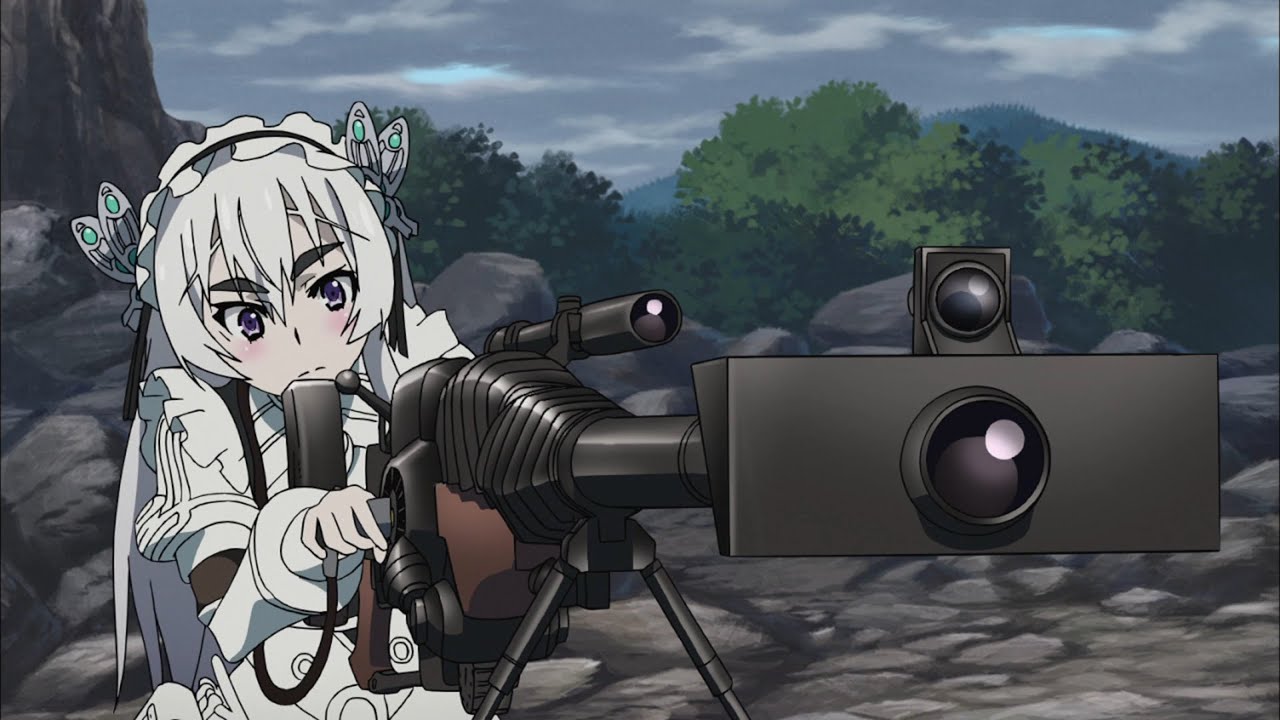 Who would have thought that a cute girl in a frilly dress could be a talented gun wielder? Well, she may not shoot bullets, but her trusty Gundo allows Chaik to cast spells that require a high level of precision.

However, she’s a mage who prefers to not settle situations with violence, as she often opposes any plan or attempt that involves hurting another. With Gundo, she can cast precise spells that can explode, nullify, poison, and deal out physical attacks as well.

Only select only magical girls and characters who use magic have used guns as their method of delivery, making Chaika a unique girl with a gun. 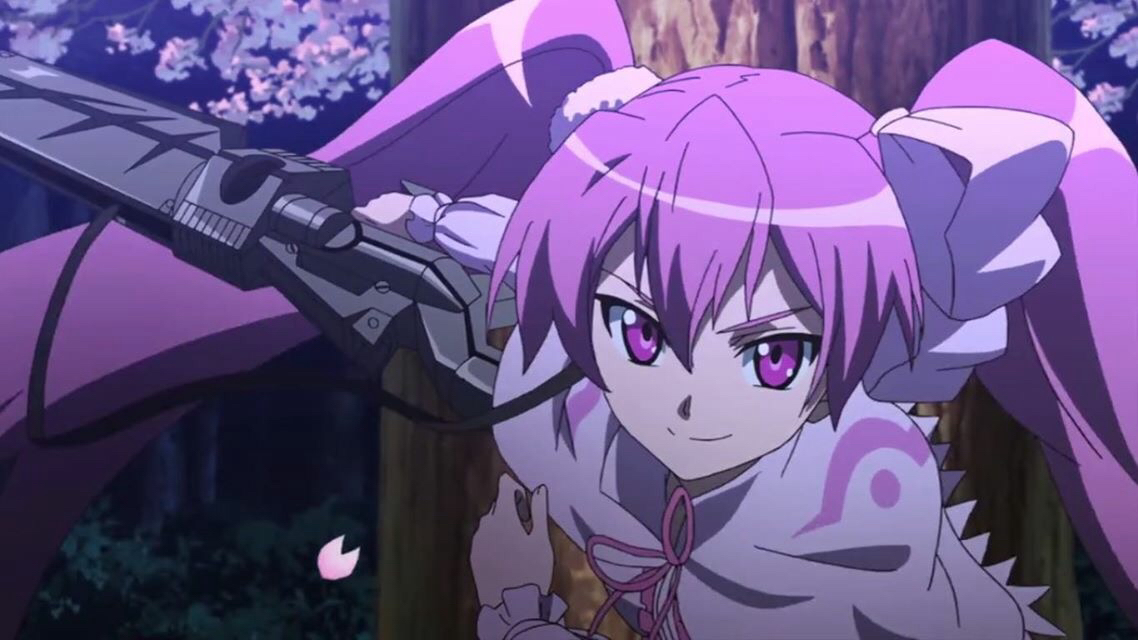 This self-proclaimed “genius sniper” is a member of an assassination group known as Night Raid. She may look like a sweet girl dressed all in pink, but she has a quick wit with a sharp tongue that she uses often.

She maintains a cold exterior most of the time and is quick to anger, but she is capable of kindness and love. As a rifleman, her gun is actually capable of shooting in three different modes, including sniper, long barrel, and even a machine gun.

With this powerful weapon, in combination with her talent in hand-to-hand combat, Mine is a sharp-shooter who shouldn’t be underestimated. 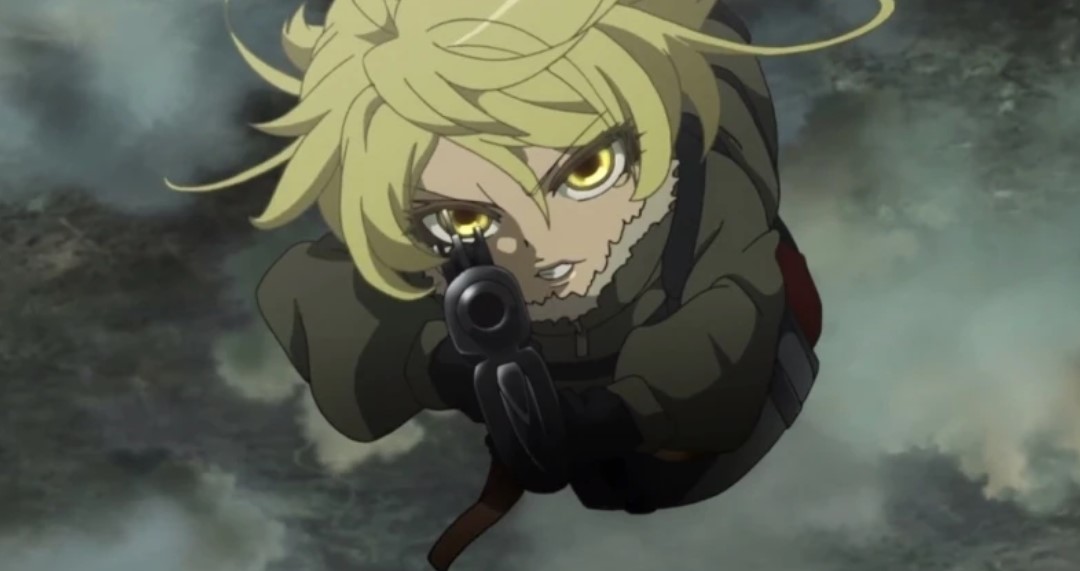 Tanya was once a heartless salesman who was reborn into the body of a little girl after being pushed in front of a train. At only nine years old, Tanya became a ruthless soldier who, by the age of 12, gained the title of “von,” meaning noble.

She is an excellent analyst who quickly earned the title of Lieutenant Colonel, as she is a force to be reckoned with in the sky and with her gun.

Alongside her incredible defensive and offensive maneuvers, Tanya is quite manipulative in that she uses her young age and appearance to convince other officers to do as she pleases.

With a total of 62 kills by the age of 13, this is one little girl with a gun you wouldn’t want to challenge. 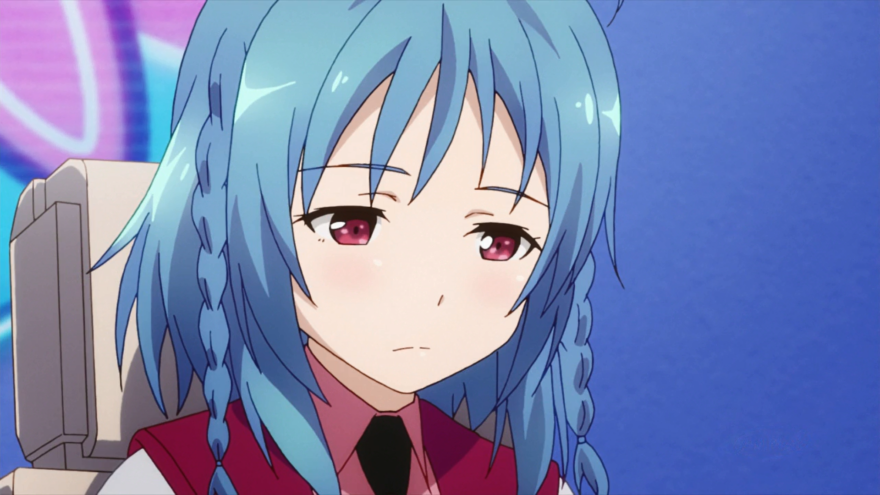 Saya looks pretty much uninterested with everything that’s going on around her. At first, she looks like an innocent and sad-looking girl who needs protection; however, we quickly find out that that’s not the case.

She’s sharp, quick on her feet, and is, of course, crazy talented with not just guns, but any weapon or lux that her father designs.

These could be anything from a normal handgun lux to a lux grenade launcher. Saya actually came to Seidoukan Academy to promote her father’s arsenal, which is pretty effective given how well she can use them.

However, her lack of interest in pretty much anything is the main reason she’s placed dead last in this list. 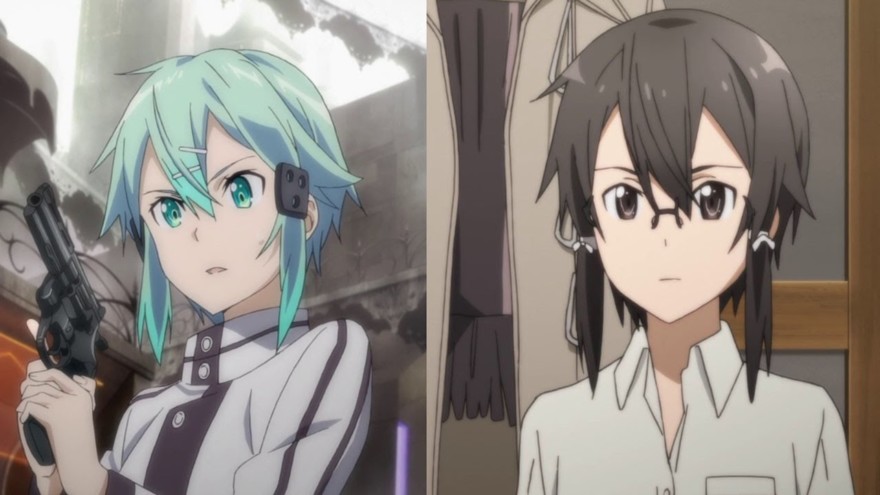 Shino Asada, who is better known as Sinon, is an expert sniper marksman in Gun Gale Online.

She’s a one of a kind shooter who truly lives by the saying: “One Shot One Kill.” Now while Alfheim Online did not allow the use of guns, unlike GGO, Sinon was still able to use her long range combat abilities with a bow and arrow.

Sinon is always calm and collected; however, she gets easily perturbed when talking to Kirito, and if you’ve already watched the series, you probably know the reason why. 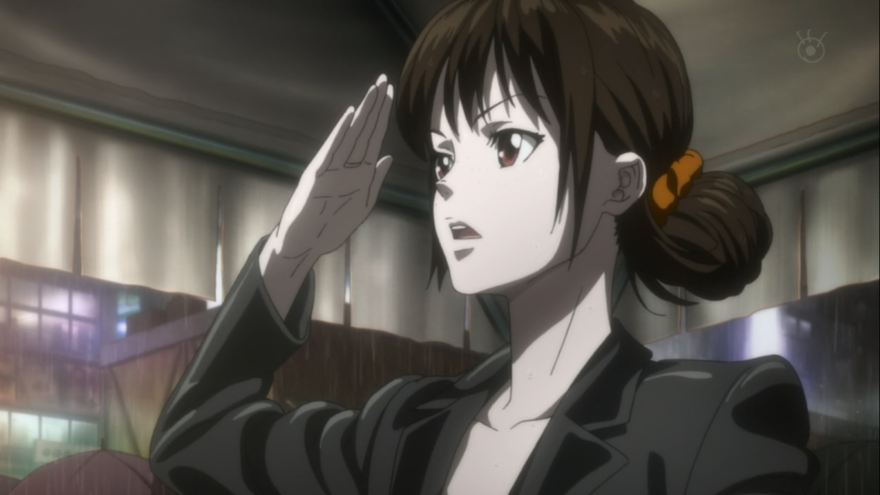 Akane started out as a mousy, naive inspector whose personal idea of justice sometimes gets in the way of taking the bad guys down. She may be intelligent and insightful, but she can be too idealistic for her own good, too.

For example, she let a villain called Shogo Makishima to slip out of her hands — a move that lead to the death of her friend at the hands of Shogo.

Despite this, she still fails to exact revenge and lets him get away another time because she couldn’t kill him and wanted to bring him in alive.

Character development is what makes Akane such a joy to watch. As she spends more and more time with Division 1, she gets more and more attuned with the way of the detective.

She eventually becomes a cold-blooded sniper whose sense of justice is taking bad guys down– by any means necessary. 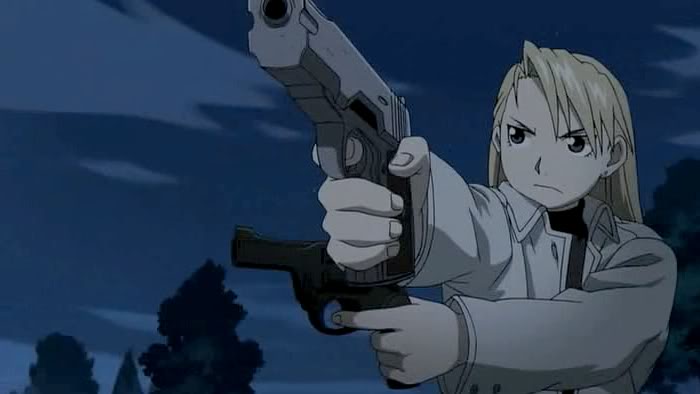 The sharpshooter and firearms specialist is not only his personal bodyguard but also his most supportive subordinate.

Riza Hawkeye is rigid, disciplined, and the model of what a perfect soldier looks like. However, she’s not without a soft and sweet side.

In fact, She’s very warm and kind when interacting with Edward and Alphonse, as well as with Black Hayate, her beloved Shiba Inu. 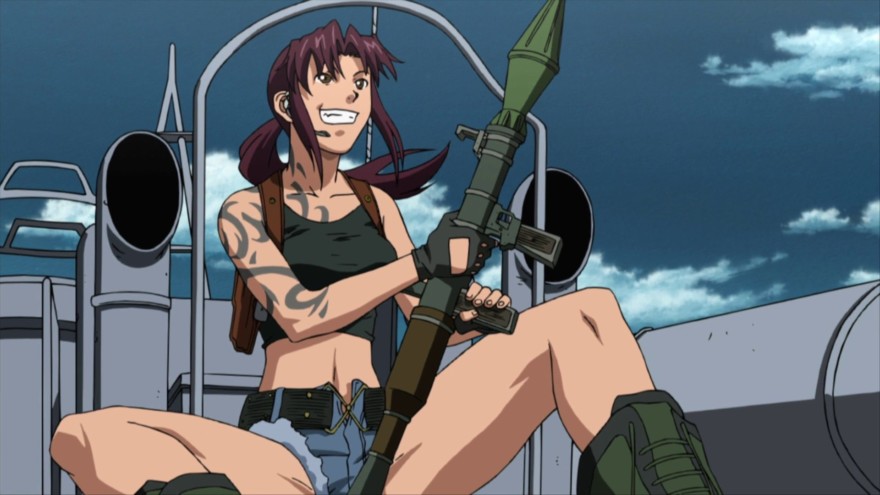 Even though Rebecca Lee or ‘Revy’ is the main female protagonist in Black Lagoon, she’s not that easy to like. A chain-smoker, a drunk, and a loudmouth, Revy is not familiar with the concept of diplomacy.

To get her way, she depends on her marksmanship and other forms of violence.

She’s rude, aggressive, and sarcastic, not to mention a bit racist with her speech. She calls people ‘beaners’ and ‘chinks’ as she pleases, and never apologizes for her rudeness.

She’s one of the most remarkable female gunslingers in anime, particularly because torturing people and taking someone’s life never fails to give her maniacal glee.

The pain and emotional trauma she received in the past has caused her to be this bitter, but in the interest of avoiding spoilers, we’ll leave you to find out what exactly happened to ‘Two Hands’ Revy for her to end up the way she is. 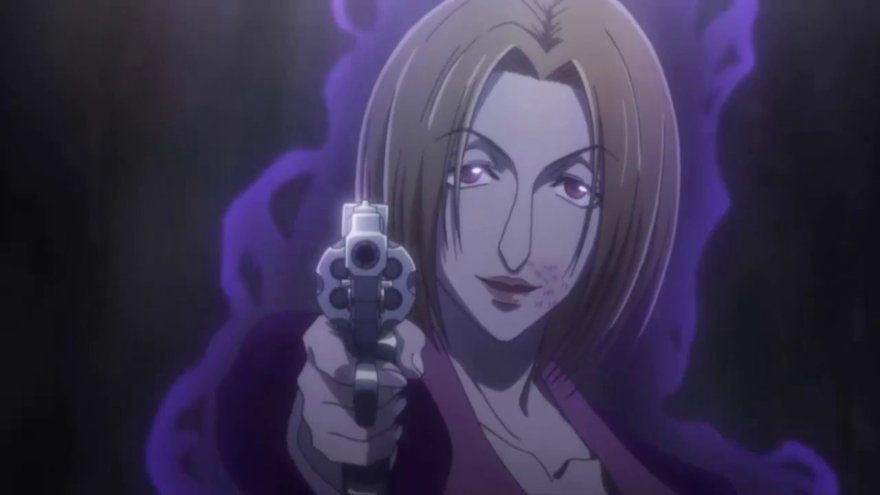 Pakunoda is part of the list of best anime gunners because let’s face it, she’s loyal to a fault and exudes a healthy amount of confidence that can intimidate others and earn the respect of the other Phantom Troupe members.

The way she uses her gun is amazing because it’s not just used to kill, but it can be used to gather information and the purest memories of her foes.

But she’s pretty much a supporting character, and *spoiler alert* she did die too early in the series to do much more damage than I would have liked. 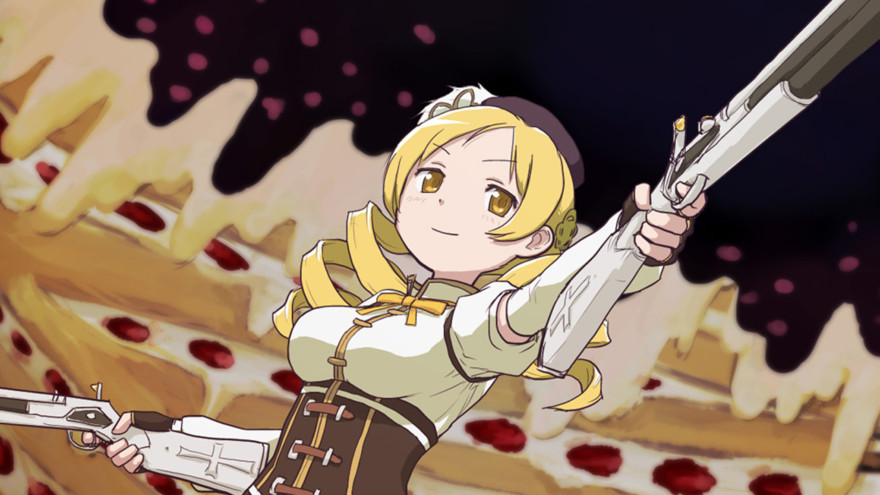 Mami Tomoe is a veteran magical girl who is generally pretty kind to everyone, with the sole exception of Homura Akemi.

She’s pretty skilled in a gunfight on top of using her ribbons that can turn into a giant gun.

All of her guns can be summoned and are patterned over rifles used in the 1600s, so she needs to be pretty accurate. Mami has this inclination to save everyone around her after her parents died in a car accident. 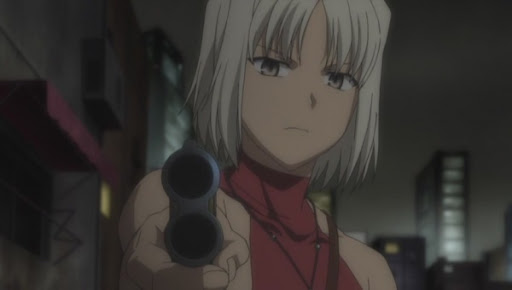 Canaan is the stoic and quiet titular protagonist of the anime of the same name. But don’t be fooled with the Bible-referenced name because Canaan’s story is far from holy.

Canaan is a former military-trained assassin who’s not so bad with just handguns. She makes a pretty awesome companion to the other protagonist on the show, Maria Osawa, who is out in China looking for the next great story.

The greatest thing about Canaan is how we see her transform from a cold-hearted mercenary to someone who understands the consequences of her actions.

By the way, just to let you know, Canaan is a codename which Siam gave her after being the lone survivor of a war-torn village, so you kinda understand why she acts like that. 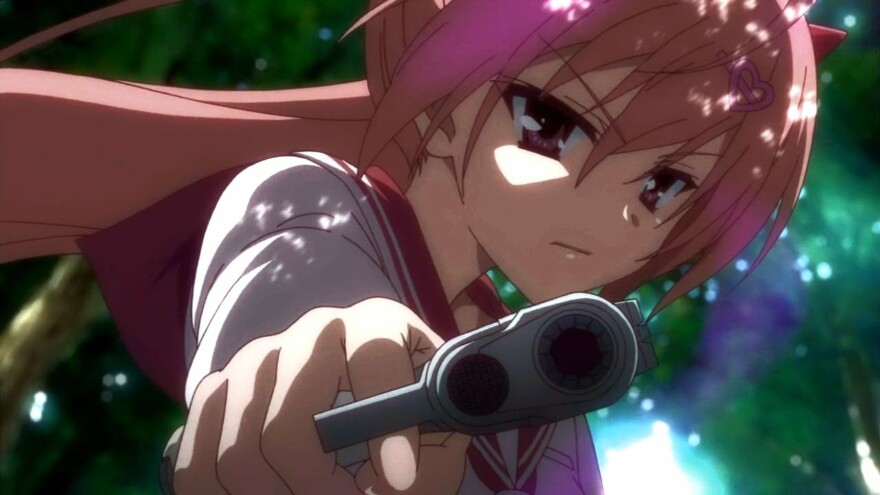 When an anime character is nicknamed ‘Sherlock Holmes IV,’ one can’t be faulted for expecting only great things from him/her.

Unfortunately, Aria H. Kanzaki is considered a disappointment in terms of her lackluster deduction skills.

In fact, she earned the pseudonym ‘Defective Holmes’ as a result.

Despite all that, she’s a great young assassin whose life turns upside down as she falls in love with her prodigy, although she can’t always express her feelings. 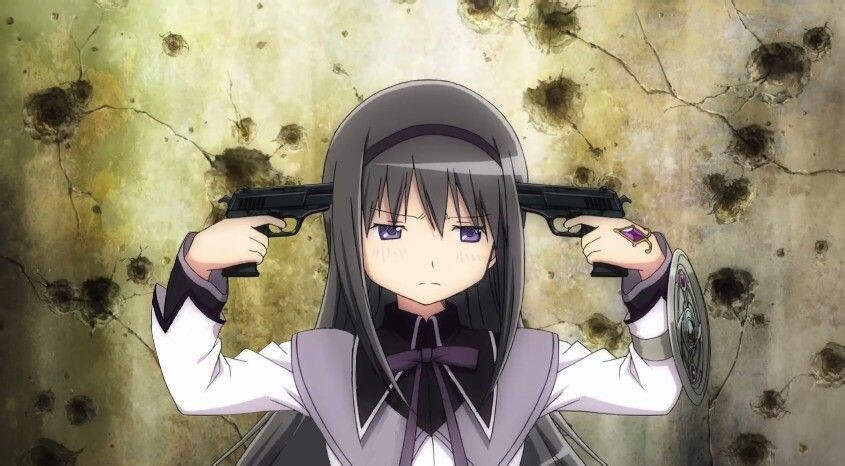 Homura Akemi is another Magical girl on this list. Unlike Mami, Homura uses modern guns and regular firearms that complements her magical shield. Homura is first portrayed as a meek and timid girl who is intelligent but lacks confidence.

However, that is far from the truth. She’s just used to looking so unfeeling after witnessing several horrors and suffering, which is more than enough for one lifetime. 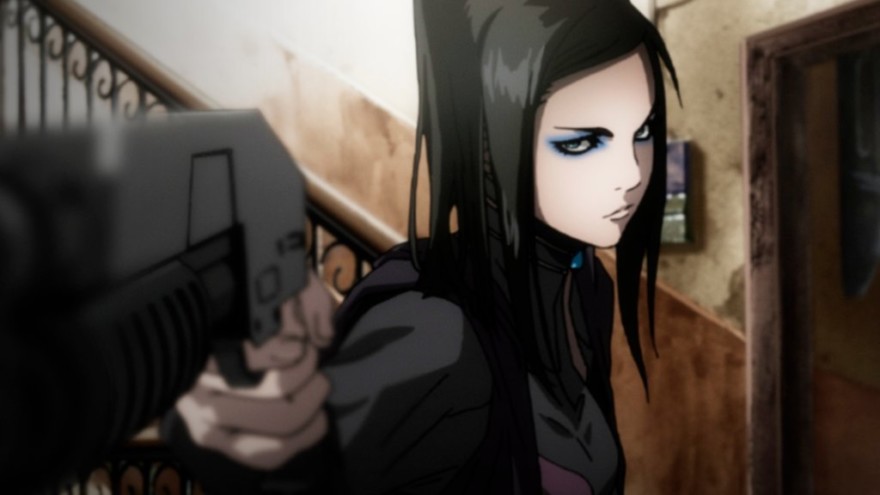 She was genetically engineered to have the maximum amount of curiosity any human being could ever have, and her never-ending quest to satisfy her curiosity usually leads her to danger.

At first, Re-l appears cold, insensitive, and apathetic, but thanks to gut-wrenching flashbacks about her childhood, we have come to know that Re-l’s aloof personality is nothing but a result of the intense emotional manipulation done to all residents of Romdeau. 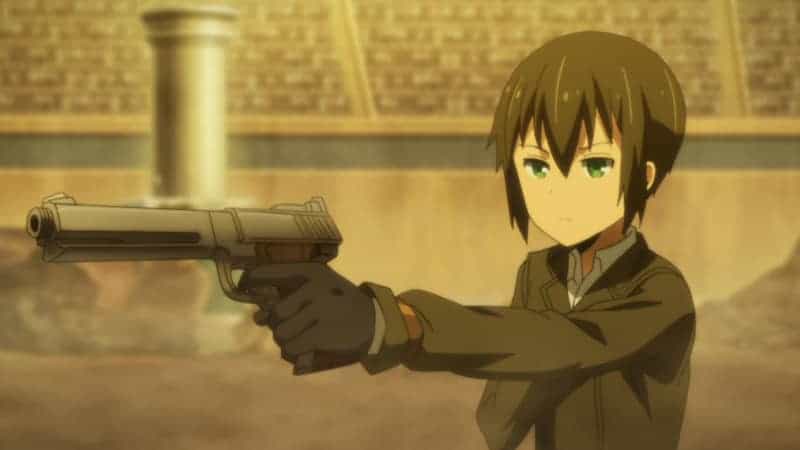 If you’re wondering how come a teenage boy made it to this list of the best anime girls with guns, then you didn’t pay enough attention to Kino’s Journey.

The protagonist in this story may be an androgynous badass who travels in a sexy Hermes, but Kino is still very much a girl.

She’s an excellent marksman who travels the world to experience other cultures and hunt enemies, confusing and confounding everyone she meets regarding her identity and true personality. 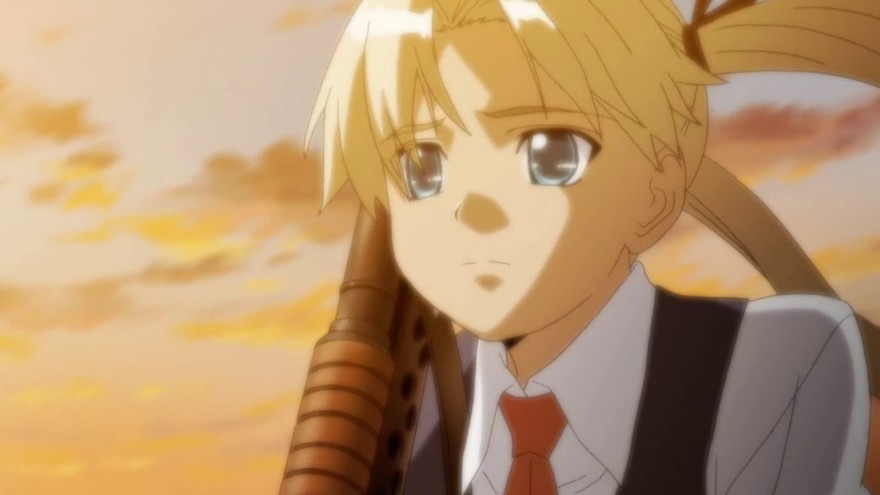 Speaking of androgynous gunslingers, who can forget Triela, one of the Social Welfare Agency’s first-generation cyborgs?

It took her all of two seasons before finally admitting that she doesn’t fancy the masculine clothes bought for her by her handler Hilshire because she thinks they make her stand out.

Things don’t particularly end well for this cyborg, everyone knows that it’s hardly considered a spoiler, but boy, did she make good use of what limited time she had. 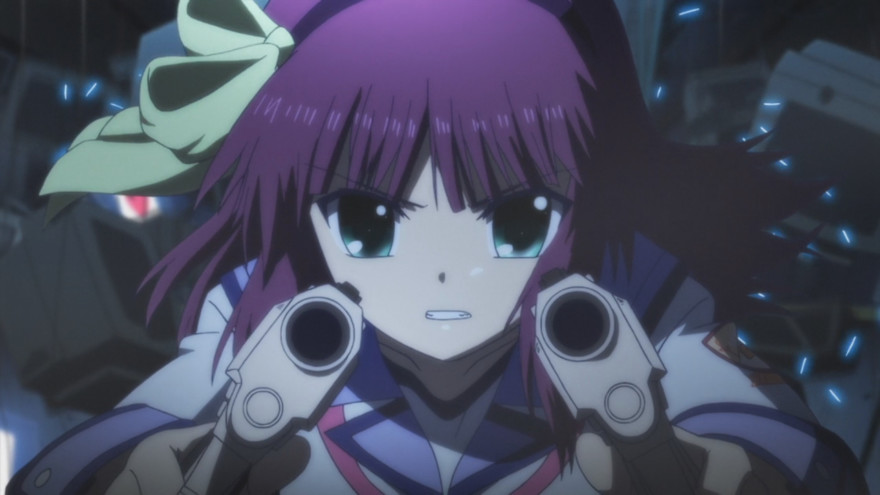 Yuri Nakamura, with her pink hair and yellow ribbon to match, looks like your typical schoolgirl. But you’ll quickly find out that she’s not an average high schooler.

First, she’s already dead. Next, she is actually the founder and leader of the Afterlife BattleFront or ShindaSekaiSendsen (SSS), a rebel group that wishes to fight God because of what happened to their lives.

She fights an actual angel using hand grenades, a retractable knife, and her trusty Beretta 92 Pistol, among other weapons. 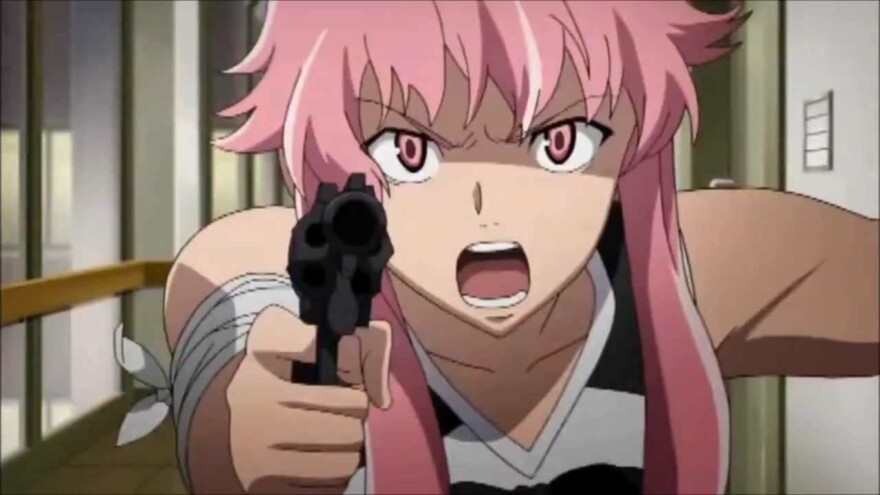 If there’s one crazy female gunner that I would probably never forget, that’s YunoGasai from Mirai Nikki.

Just like Yuri Nakamura, at first, you’d think she’s a harmless girl who also sports pink but long hair. But blink, and you’ll probably die because this girl is a total psycho!

She’ll do anything for her beloved Yuki and will obliterate literally anyone who’d get in her way. She uses tons of weapons to do this, but the way she rocks a rifle while smiling like a maniac is enough to put her on top of this list.

That wraps up our list of the 15 best gunslinger girls in anime. Love them or hate them, these strong, powerful women definitely deserve the 21-gun salute in their honor.

[…] tries to moves on with his life. A chance to going back to a normal life ends when a mysterious girl points a gun at Yoshino’s […]