Many of the original Yu-Gi-Oh! Cards are overpowered and very much banned in today’s tournaments and matches. Among the thousands of cards that have been released over the years, there have been some that could very easily turn the tide of a match. Today, we’ll be looking at some of those cards.

This card has a simple description, certainly. But you shouldn’t judge a book by its cover or a magic card by the few words in its box. Pot of Greed allows you to draw just two cards from the top of your deck.

Back before Pot of Greed was banned, it was a card that gave its duelist an easy way to get to the best cards in their deck. Alternatively, and more commonly, it was used in a moment of panic when all a duelist had in their hand was a bunch of cards that didn’t go together or couldn’t be used.

Who doesn’t love absolutely destroying their opponent’s strategy by taking out every spell and trap card they currently have in play? Trick question, because it’s great, and it can completely turn a duel in your favor just when you might be starting to lose.

Harpie’s Feather Duster is a card that was made infamous by Mai Valentine, one of the duelists from the Yu-Gi-Oh! Anime series. She first appears in season one, and though her character isn’t very likable at first, she changes as the show goes on.

This card is obviously more powerful than Pot of Greed, considering that it has the potential to wipe your opponent’s whole field of traps and spells. But the two magic cards play on different levels, so it’s difficult to compare them.

Another magic card that came to life in the Yu-Gi-Oh! Anime series, Change of Heart, was a card that was first put into play by Bakura in season one. In the anime, the card was used during a Shadow Duel so that Yugi and Yami could save their friends from the evil spirit trapped inside Bakura’s necklace.

In real life, we don’t have to worry about Shadow Duels, thankfully. But Change of Heart is still an extremely useful card for anyone who likes having last second tricks up their sleeves. It’s a card that allows you to target one monster on your opponent’s side of the field and take control of it until the end of the turn.

Technically, it was played incorrectly in the anime, but that’s usually what happens in a kids’ TV show. Change of Heart is a card that gives you a free and potentially powerful monster to batter your opposition with. Go figure. 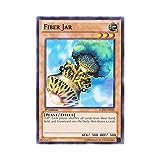 Fiber Jar will come up on every list of banned Yu-Gi-Oh! Cards, and for a good reason. This monster card makes both duelists put all their cards on their field, in their hand, and in their graveyard, back into their decks. They can then draw five cards.

A card that every duelist misses from their deck, Heavy Storm, was a great card to playback in the day. Great for the person playing it, not so much the duelist on the other side of the field watching it be thrown down into a spell card slot.

This magic card enabled the user to destroy all spell and trap cards on the field – yes, all of them. It was best played when the user didn’t have any of their own spells or traps knocking about on their side of the field. It’s a great card, a little better than Harpie’s Feather Duster because you could hit everything on the field, rather than just cards currently in play.

Another magic card because all the good magic cards get banned quickly. Graceful Charity is a card that enables the duelist to draw three of their own cards and then discard any two cards from their hand. In with the new, out with the old.

It’s a card that gave duelists too much of an advantage by allowing them to discard cards that were useless or cards that need to be summoned from their graveyard and letting them draw three new cards to play with.

Return From A Different Dimension

You pay half your life points, summon as many of your banished monster cards as you possibly can, and do whatever you want with them. Then, at the end of your turn (if your opponent is still standing), all summoned cards are banished again. 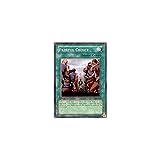 Back to spell cards, Painful Choice was a card that allowed you to pick five cards from your deck and reveal them to your opponent. They then had to select one of those five cards to add to your hand. The rest were discarded.

This card enabled you to trick your opponent. Cards going to the graveyard can be summoned again. So, even if they pick the lesser evil, you could have several strategies in mind for later.

The Morphing Jar, the second monster card in this entire list. This card has a flip effect that makes both duelists discard all the cards in their hands and draw five new cards. It’s an annoying little thing, but it offers the perfect chance to change the way your game is going.

Our final card and the third monster card here: Substitoad. This card once allowed you to tribute one monster so that you could special summon one “Frog” monster in return. Why was this a problem? You may be wondering?

Well, “Frog” monsters can’t be destroyed by battle. That meant that you were always safe from lifepoint hits in battleifyou had a cute little frog on your field.