For centuries, seductive clothing has become a way of wooing your partner and increasing attraction. Even the game Sims have an option to woo partners and increase affection. However, many people do not concern themselves about the clothes Sims 4 characters wear before doing the deed.

Well, with our list of top 10 best Sims 4 thong custom content, at least the female Sims are covered when it comes to what to wear, whether it be all out or more reserved and modest. 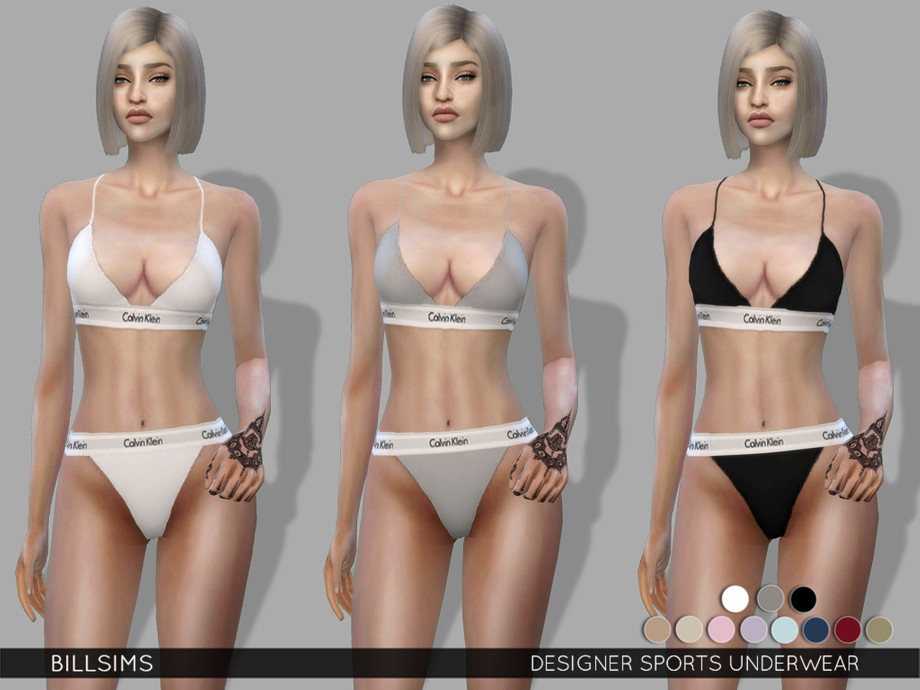 There are many Sims 4 versions of designer clothing, underwear included. If you want a stylish designer thong, look no further than this Designer Calvin Klein Sports Underwear.

This thong CC comes in 11 colors, including neutrals, pink, blue, red, and a greyish-purple. It is also designed specifically for female Sims, from teens to elders.

This thong is also a great option for Sims, who are more athletic and need to be able to go for a job while still looking hot.

This thing extends upward, reaching over the tops of your Sim’s hip, mimicking the ’90s trend of exposing the strings of one’s thong.

The Hot and Provocative Thong Underwear is separated into two files, but you have the choice of downloading one or both.

This underwear CC comes in 20 different color variations. The promo photos feature the underwear in solid colors, including greens, blues, red, and pink. The CC also comes in colors with black lining.

This thong CC is also for female Sims only and can be found in the underwear section of the character customization menu. This thong CC is reminiscent of the popular trend from the 90s, where the straps of the underwear would peak over pant lines.

This High Rise Thong underwear CC accentuates your Sim’s hips as the straps wrapped over the top of each side.

The High Rise Thong underwear comes in 16 colors and 16 nude swatches, making for a versatile option. This CC can be found in the accessory section of character customization, in the tights section.

For a slightly sassy and hot thong CC, this is definitely worth the download! 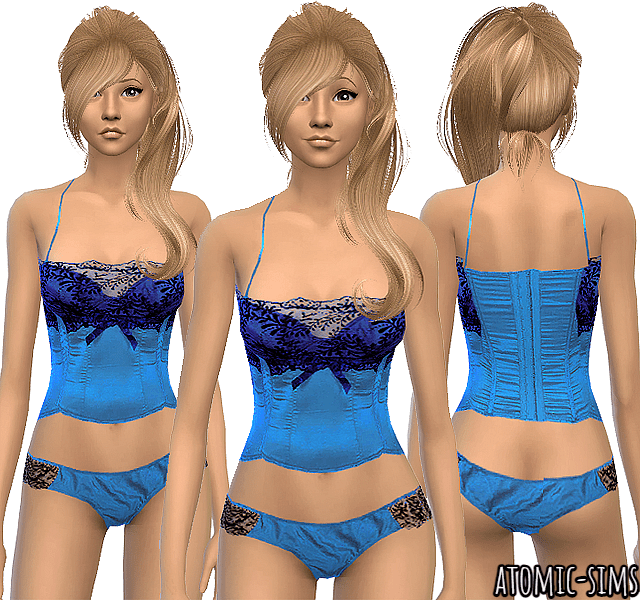 A nice and modest corset and thong with a bit of lace on the side, Simchic Corset Top and Panties Blue Set Conversion is a bit more on the plain side when it comes to thong CC.

The CC also covers a good amount of body too, especially when compared to the other more lace-heavy underwear on the list.

For those looking for a more modest look that isn’t contradicted by a lot of lace, this is the perfect CC for you. 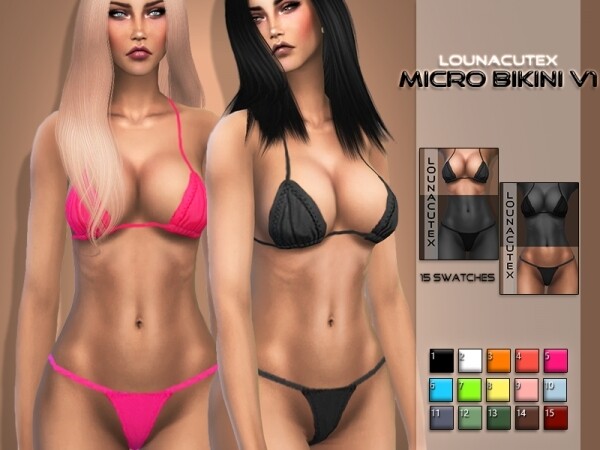 To anyone wanting to get their Sim something to wear on the beach that’s a bit more risque, Micro Bikini Set V1 has got you covered. Being sort of an in-between of pretty normal and absurd in how much it covers, the CC is available in 15 different colors.

Your Sim can use a bikini that’s fairly revealing but still leaves a good amount to the imagination or a swimsuit for the modest lads. This, however, will only work on teens to elder female Sims. 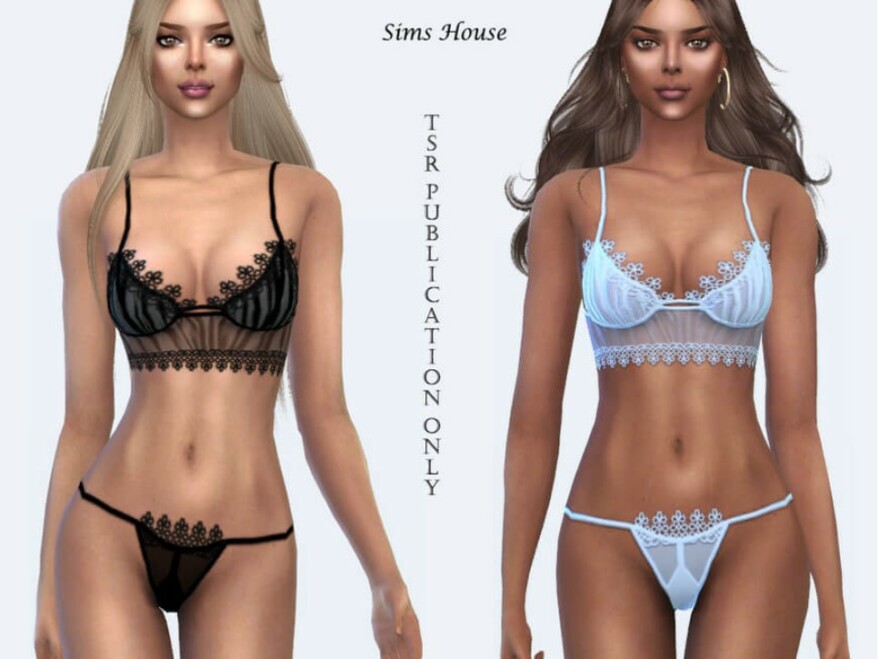 Sims 4 Tulle Lingerie Set is a more run-of-the-mill look as far as lingerie is concerned. Don’t let that turn you off, though, as even if it’s modest, it doesn’t go ham on the laces as some of the other CCs go.

Since it’s Simpler, it stands out compared to the other CCs available as it’s not that complex. However, it still has a good amount of transparent and laced areas to show the off-colored skin as the fabric obscures it.

Available in 8 different colors, it can also be equipped separately from its set as just the top or just the bottom. 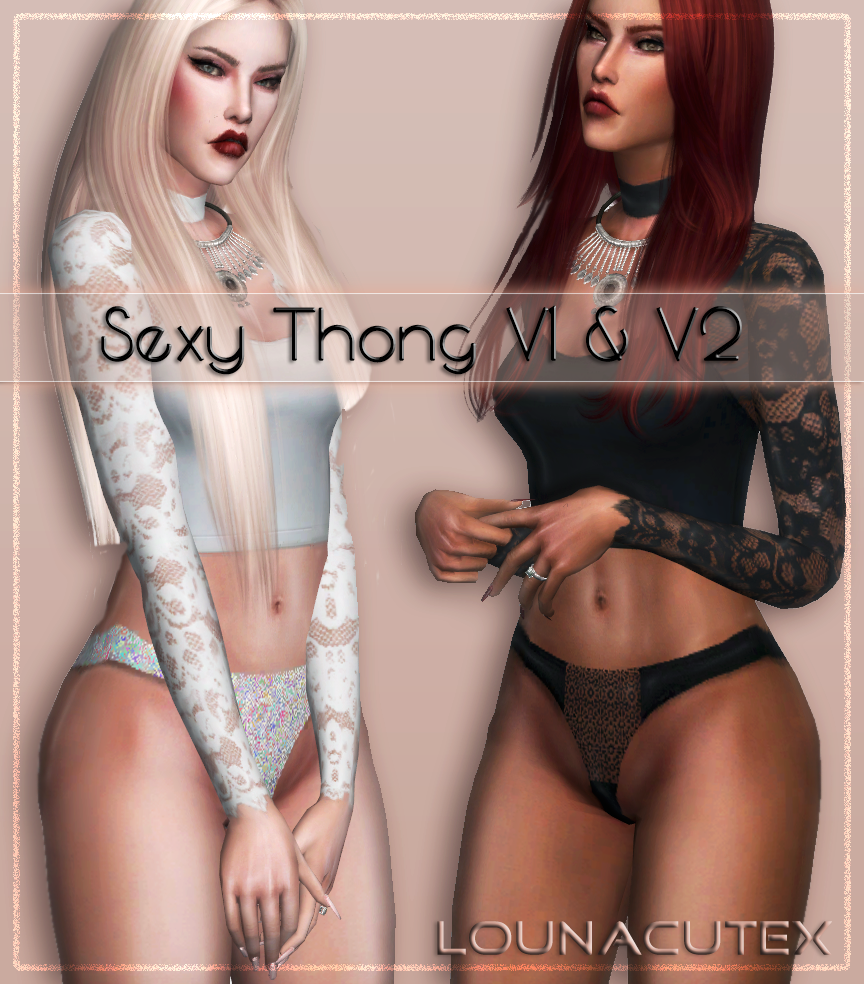 Among the choices for thongs, S*xy Thong V1 + V2 can differentiate itself as it covers up more than most underwear. Including an arm and torso section all connected for a more reserved look leaves a lot of mystery.

As it covers a lot of space, the lingerie is styled with laces and patterns to maintain visual interest, which creates a lot of mystery. It comes in a handful of colors and is only available for female Sims. 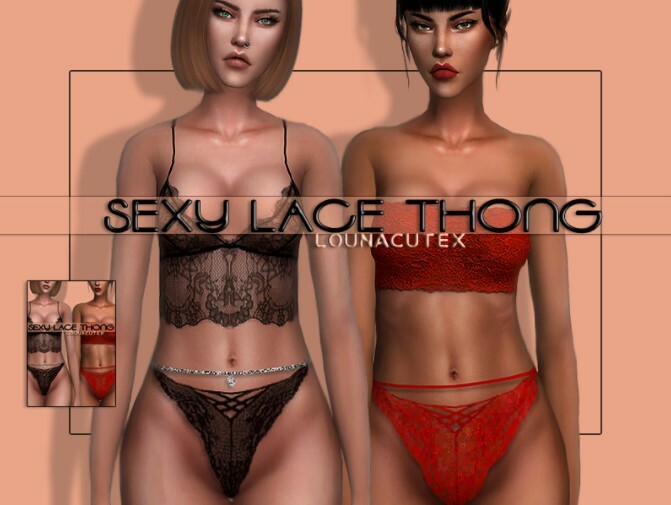 If you thought that S*xy Thong V1 + V2 covered just a bit too much, but you still preferred the overall look, then S*xy Lace Thong is the perfect CC for you. It shows a bit more skin but still looks pretty and desirable.

The CC gives a lingerie look with laces but only covers the bottom and torso this time instead of the entire body. The patterns also go along the whole outfit, so more skin is shown.

There are two variations, one has shoulder straps and goes down a bit more, with the other being tight on the chest and ending around the ribs. This is something a Sim should wear before the “wooing sesh.” 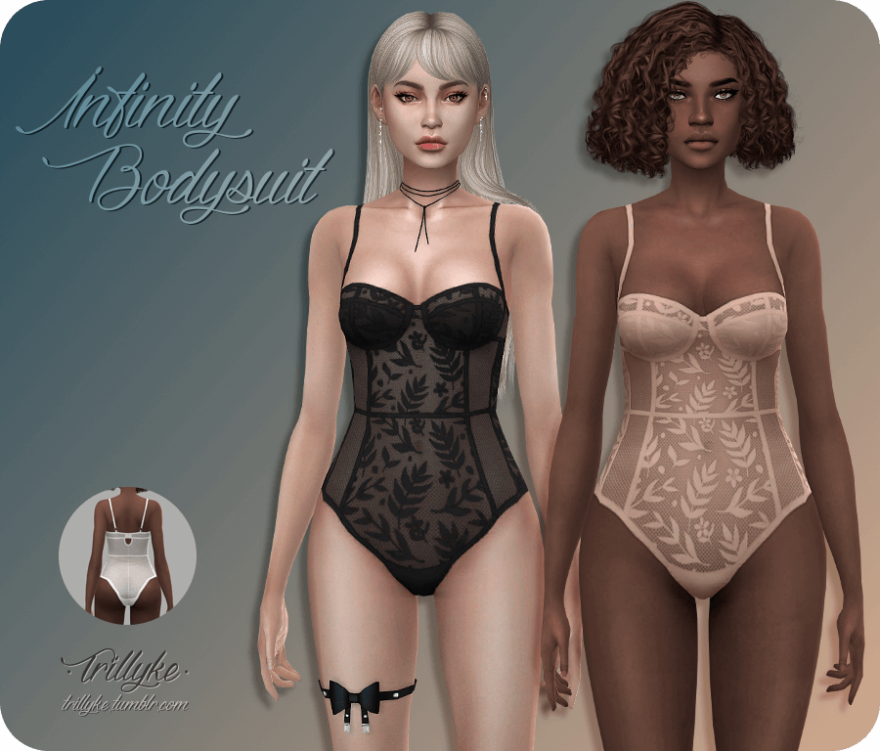 To go the other way around from the S*xy Lace Thong compared to the S*xy Thong V1 + V2, Infinity Bodysuit chooses instead to cover even more but still has a good amount shown at the same time.

Having most of the torso obscured by the fabric showing lightly with a bit of transparency, this CC could also be used for bedtime for a comfy feel.

You can even find shoes, makeup, and earrings in this CC pack to go along with your provocative look. 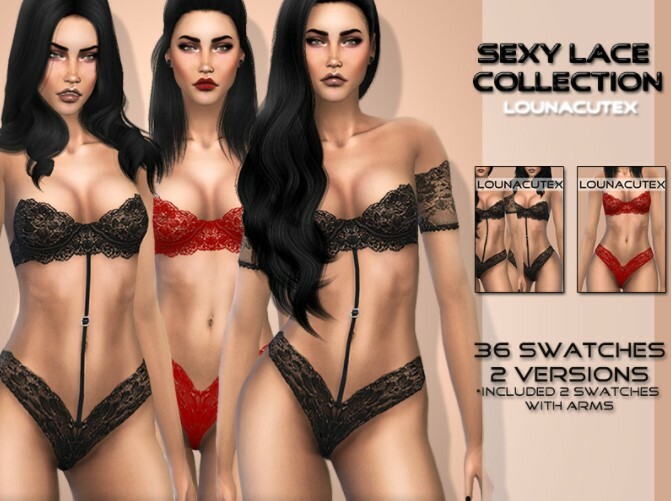 The CC goes with just the top and bottom with an optional belt connecting the two or small arm laces. That being said, it does have the most variety. And the option for different colors between all variations makes the CC even more desirable. 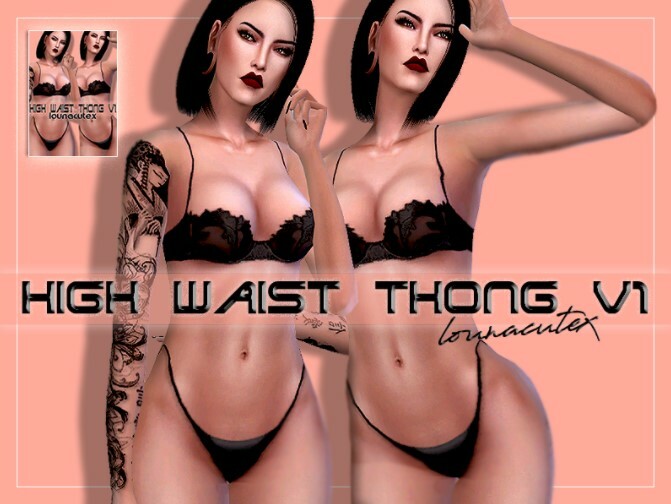 Compared to all the other lace thongs on the list so far, this is the Simplest if you prefer lace underwear with a Simple look. High Waist Thong V1, instead of going super flashy, has a Simple lace top and plain high waist thong for the bottom.

It chooses to pull back in the decorations while still being more open when compared with S*xy Thong V1 + V2 or S*xy Lace Thong and being Simpler compared to S*xy Lace Collection. 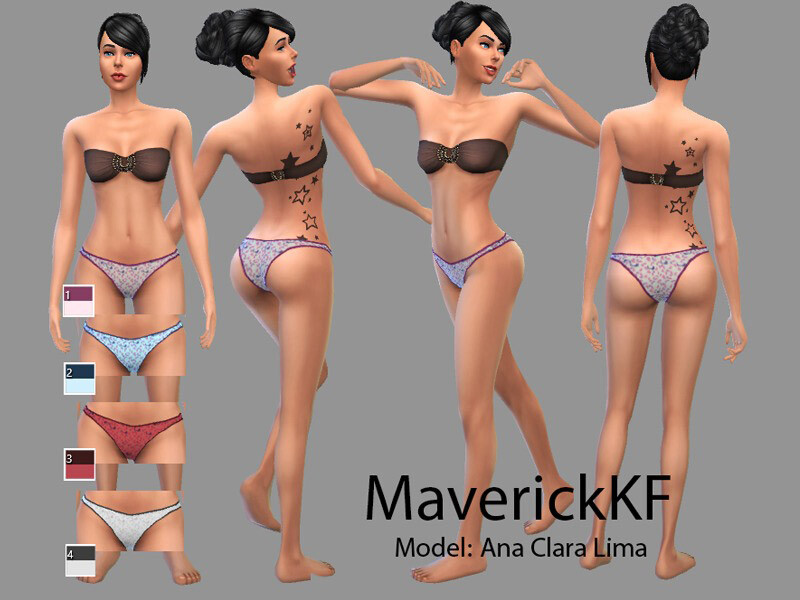 Although much less revealing when compared with the rest on the list, the Brazilian Thong V1 brings a very unique look for your underwear choices.

Having no transparent parts or any lacing, the CC may sound plainer, but with the extra design on the top and 4 color options for a patterned bottom, it is still quite stylish.

Compared to the other thongs on the list, it is a regular cut and not a high waist if you prefer such. Its biggest feature is probably just how different it looks when compared with the rest. 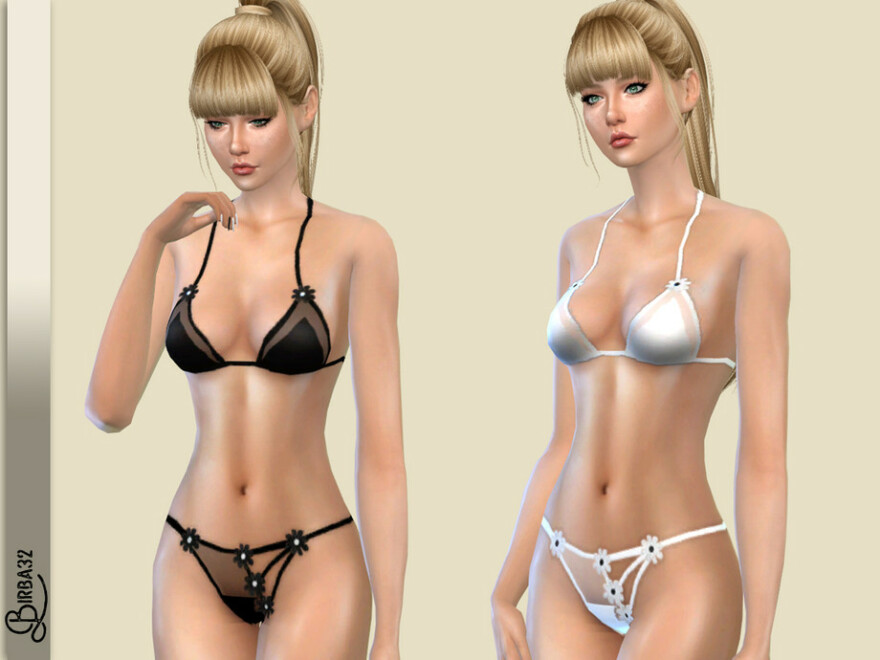 Covering the average surface area with the underwear, it still has large sections of transparent clothing for enough cover-up.

Also called Daisy Underwear, it has a flower design on the bottom, in black and white. You can also choose from two other files that offer only the top or only the bottom.