As a general rule, anime makes things a lot more exciting than in real life.

It amplifies the rush and competitiveness of anything from a simple food tasting to the most heart-wrenching car chase!

So it’s not surprising how anime can make sports almost fantastical, as exhibited by several amazing sports anime around. Tennis in anime is no different.

But it’s actually pretty shocking to find out that anime series dedicated to the sport is low. However, that doesn’t mean we can’t come up with this top 10 tennis anime list! 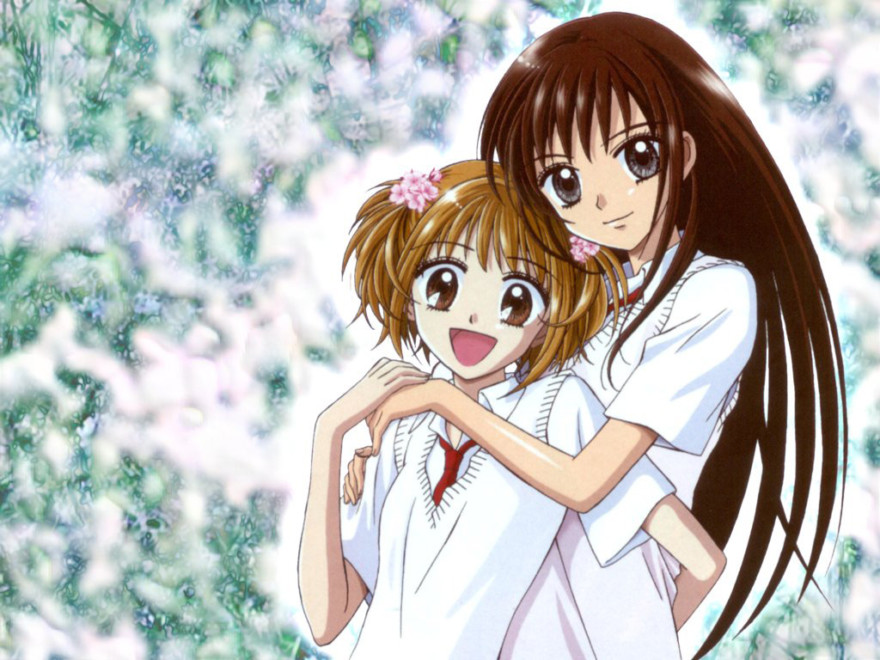 Ultra Maniac is the only tennis anime here that’s not really about tennis. To be honest, the actual tennis part here is just the fact that the protagonist, Ayu Tateishi, is a tennis player.

But it’s really more about how her life changed when Nina Sakura transferred to her school. Nina is not just a typical student because she’s actually a witch!

So now you know why it’s at the last spot. But to be fair to Ultra Maniac, it is a pretty good show. It’s just more about magical girls than it is about tennis. 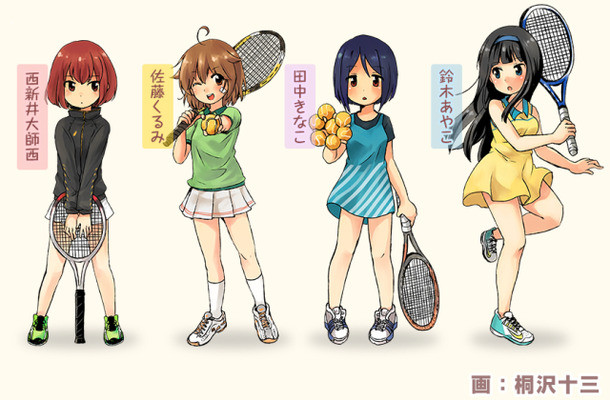 As a spin-off of a more popular anime on this list, you can’t really expect much from Usakame. Its premise, plot, and even characters are pretty similar overall.

But I’m not saying it’s all bad. If you did love the show it was based from, then you’ll find something to love out of Usakame.

Possibly the only thing different is the series itself is a much more mellow and slow-paced tennis anime that is designed to make you laugh and feel good in about an hour.

Animation x Paralympic takes spin-offs to a whole new level. But hey, I know what you’re saying. This show is technically not a tennis anime series but a sports anime that highlights different disciplines per episode.

The tennis part, or should I say wheelchair tennis, actually happens on Episode 3 where Eiichiro Maruo (from another tennis anime) matches up with an actual top wheelchair tennis player from Japan, Shingo Kunieda.

The match was superb, and it would have ranked higher on this list if they made more of this show!

If we’re going to be picky about this, then well, Happy! might not make it to this list because it’s actually a sports manga.

But we’ll make an exception for this one because of it’s a very interesting storyline.

Happy! tells the story of the not-so-happy Umino siblings who are drowning in debt. Miyuki, who was already being harassed by yakuzas to pay off her brother’s loans, decided the best thing she could do is try her hand at professional tennis and see how it goes.

Admittedly, there are a lot of mixed reviews about this manga, but I’m certain that if you are someone who loves reading about a person never giving up for the sake of her family, then you’ll be flipping through the pages in no time. 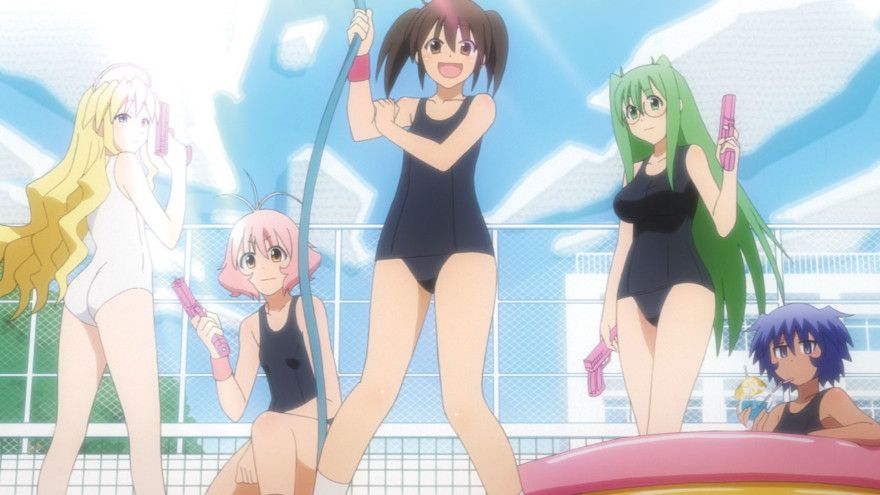 Here we are with an actual tennis anime. But instead of the usual lawn tennis with a harder ball, this anime is about its softer version.

Softenni is a lighthearted watch that is more about the lives of the girls who play tennis than about playing the sport at all.

Just resist the temptation to prematurely stop watching the series, especially if you see that the show starts at a farm.

Give it a chance, and you’ll soon find yourself invested in the ragtag Shiratama Middle School Soft Tennis Club as they aim for the nationals!

If you like a little bit of sport mixed in with a bit of ecchi and comedy, then you’ll surely love this anime. 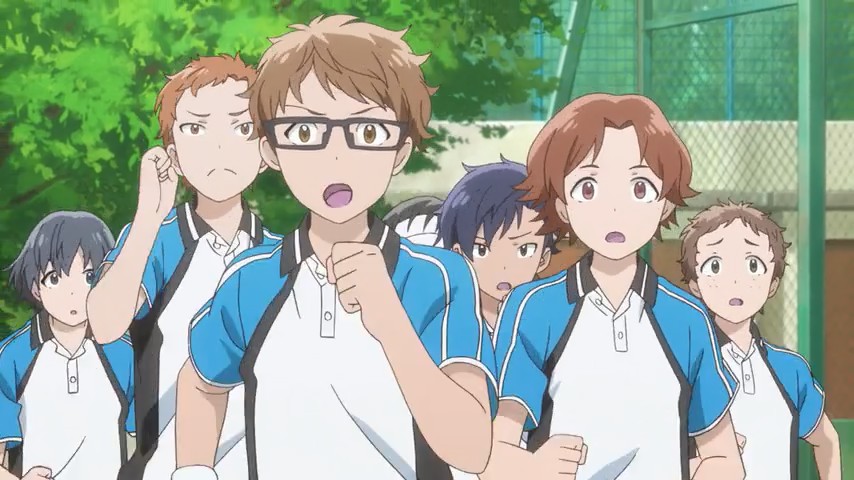 Hoshiai no Sora shares a couple of similarities with Softenni. No, we’re not talking about the nudity, but the fact that the characters and not tennis are at the core of this show.

Plus, of course, Hoshiai no Sora also showcases soft tennis instead of lawn tennis.

But the similarities end there. The boys’ soft tennis club is facing disbandment due to a lack of members and abilities. Fortunately for them, Maki Katsuragi transferred to their school at the right moment.

He isn’t really a tennis player at first. But his reflexes and quick learning abilities grant him the potential to make it big in the sport.

However, he isn’t really interested in joining any clubs, let alone a poor soft tennis club.

So how did Toma Shinjo persuade Maki to join his team? You better watch it to find out. 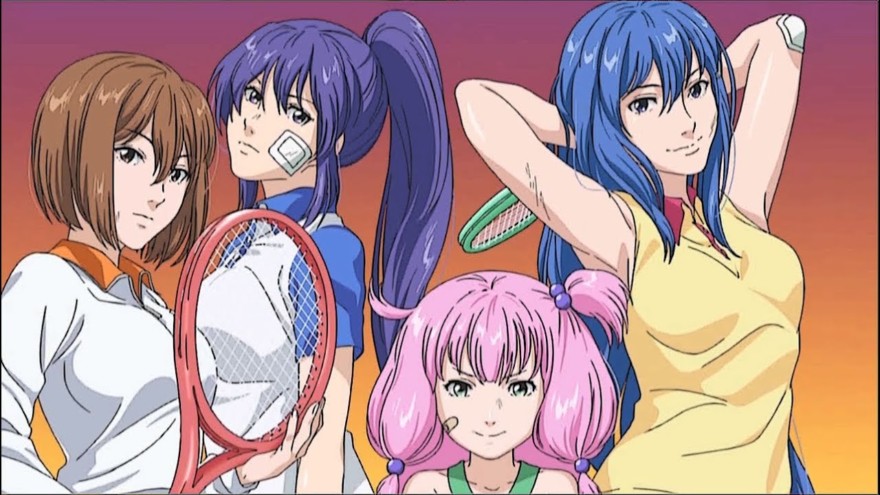 Teekyuu is the official rival of the other anime on this list we discussed earlier, Usakame. But, like the original, Teekyuu offers a more fast-paced storyline… without much plot at all.

At the very least, it’s an anime that actually revolves around a crazy girl’s tennis team with their individual quirks.

But despite showing actual interest in learning the sport, Kanae, Nasuno, Marimo, and Yuri often find something more interesting or should I say insane to do.

If you just want to sit back, relax, and waste time, I suggest you binge-watch all 108 episodes. But don’t be fooled by the high episode count because each one is just 2 minutes long! 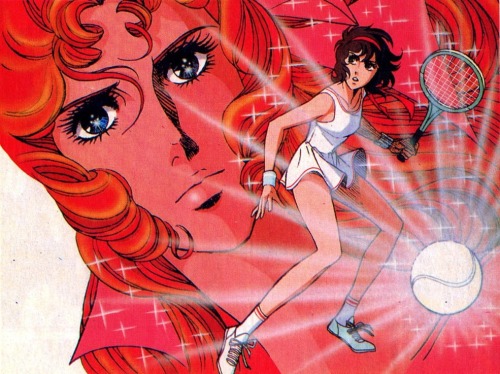 Being the pioneer tennis anime, Ace wo Nerae! has one glaring weakness: its animation style.

It’s pretty old, and if you compare it to other shows on this list, it really won’t make the cut.

However, you have to forgive the poor animation because if you can get past that hurdle, you’ll witness a story about the slow but steady progression of high school tennis player Hiromi Oka’s skills.

As you guessed it, the show’s impact is not on its spectacular audiovisual offering or over the top moves, but on its realism and strong storytelling. 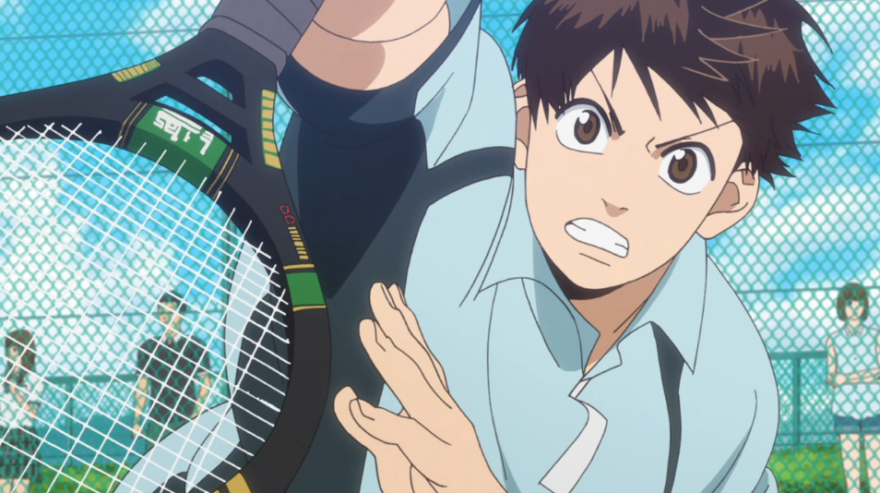 Baby steps is a surprisingly underrated anime in the international scene.

As the title suggests, Baby steps will literally take you along the journey of Eiichirou Maruo, who is taking baby steps to learn tennis to improve his overall health!

So naturally, it’s not about genius players or talented athletes from the get-go, but about true improvement by sheer determination and hard work.

Trust me on this, if you haven’t watched Baby Steps yet, do yourself a favor and get on with it ASAP. 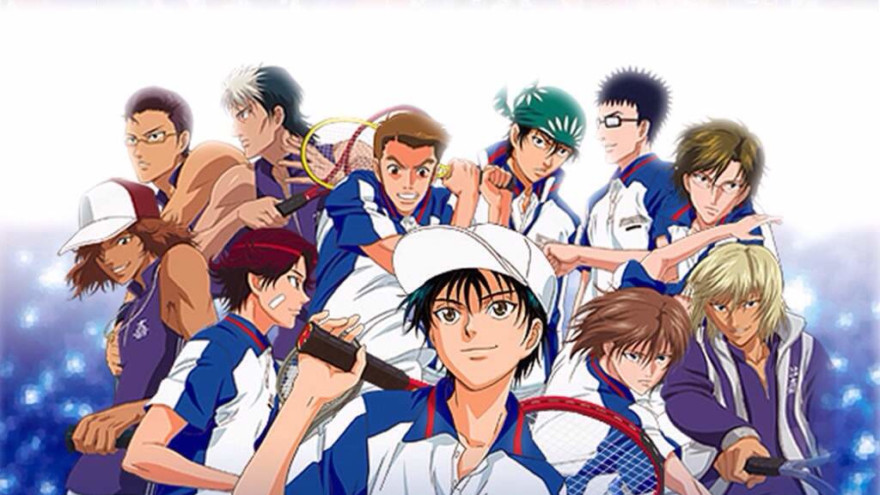 Prince of Tennis is the undisputed best tennis anime of all time. And I wouldn’t believe you if you tell me that you have never heard of Ryoma Echizen or the Seigaku Tennis Club!

It is a world-renowned sports anime that opened doors for other enthusiasts of the genre.

Did you know that it was first produced in 2001? And I don’t see its popularity dwindling anytime soon.

That wraps up our list of the top 10 tennis anime. Whether or not you agree with the ranking, it’s really up to you.

But thanks to these 10 awesome series, we get to inspire more people to pursue tennis as a sport and as a career.