It’s been 11 years since Minecraft came out, and one of the reasons why a lot of people love this game is because of the flexibility and simplicity of the game.

One being moddable as hell and the other for simply being gorgeous to look at after all the hard work of mining and killing tirelessly for hours. Today, we’re gonna be bringing you the top 21 best Minecraft texture packs that will surely light up your overall gaming experience. 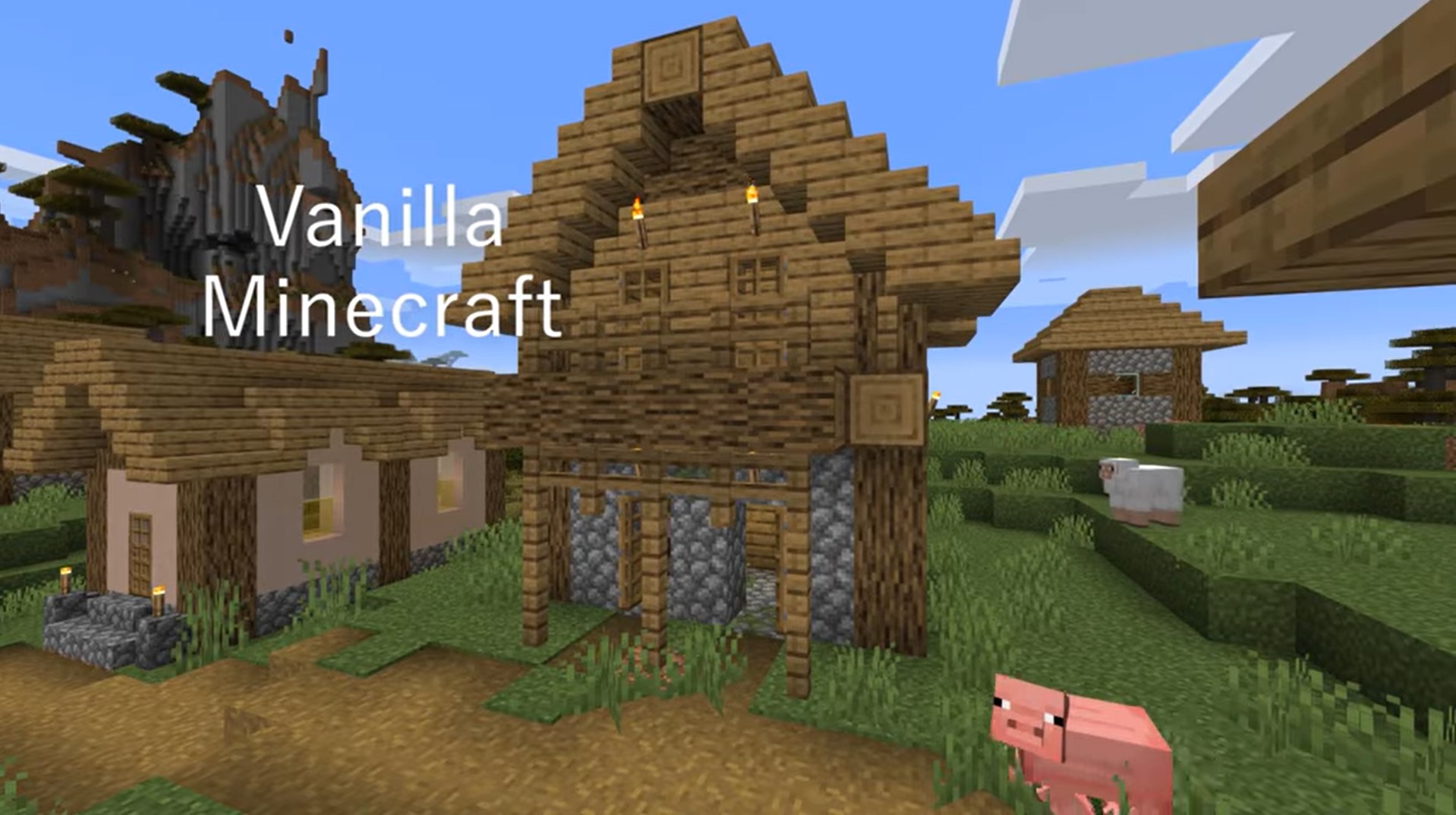 VanillaXBR is a texture pack that will upgrade your regular 16-bit resolution blocks into 32-bit resolution, giving the game a more detailed vibe. Although it doesn’t really change much in terms of gameplay, I’m pretty sure you’ll appreciate it more in terms of aestheticism.

There’s a lot of reasons why you’d really want to settle for this texture pack. The general atmosphere that the VanillaXBR gives is much more detailed and complex compared to regular vanilla textures.

This texture pack will completely turn your blocks from 2D into 3D blocks. Meaning that the blocks will have their edges completely defined in this pack.

For example, the gold inside a mining block resource will have its own separate block INSIDE the resource block, which is pretty neat.

Although Default 3D is good on its own and definitely one of those texture packs you really should be aiming for, it’s gonna be quite laggy if you mix this texture pack with shaders, especially if there are a lot of blocks around. Speaking of shaders, you might want to check our top picks for the best Minecraft shaders. 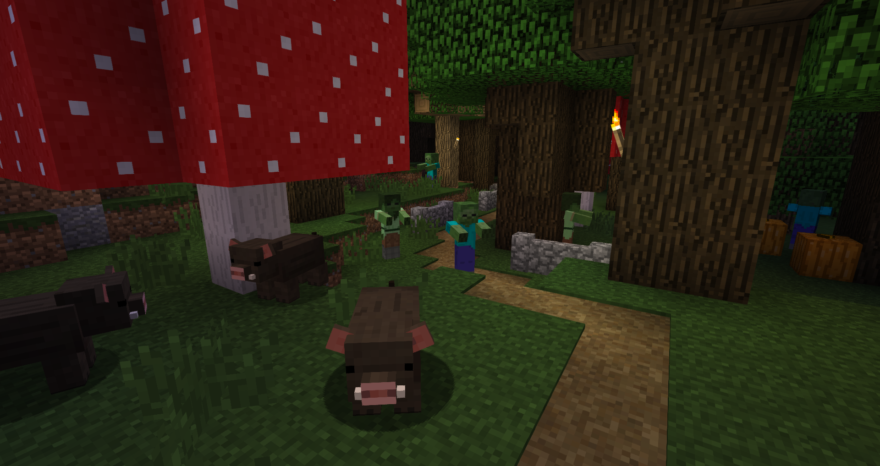 Relatively Improved Default is a texture pack that will give a new look to your vanilla gameplay by adding improved default textures to most of the models of the mobs in the game.

What’s interesting in this mod is that each mob will have its own different skin depending on which biome they spawn in, which is realistic and adds immersion into the game without breaking the game’s nostalgic atmosphere. It’s a really good texture pack, and I highly recommend getting this one. 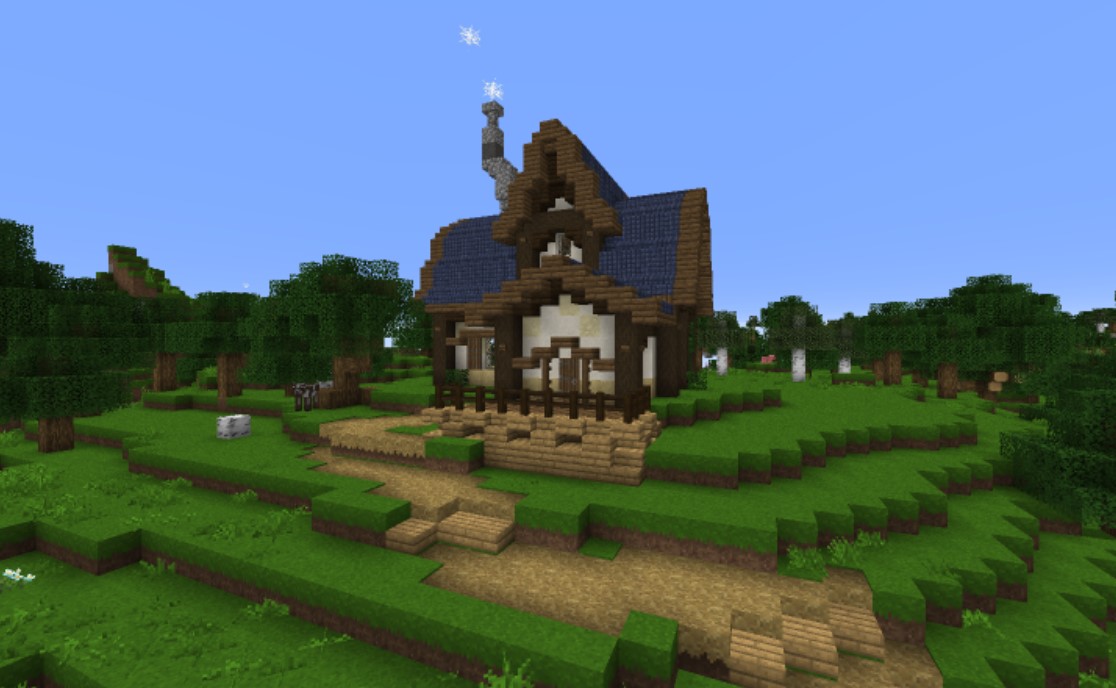 This texture pack is probably one of the most trippy yet satisfying one yet. By using Improved Default, the blocks in the game will actually mix together, making the game a bit more realistic and dynamic compared to the vanilla experience.

What’s interesting about the mix is, for example, a grass block mixed with dirt blocks will not have their edges completely trimmed, but the grass will grow out of its own blocks and mix with other blocks, giving a more pragmatic effect that makes the gameplay so much interesting.

What’s more, the texture pack also added a bunch of effects for the game, like new models and all that good stuff for the mobs. 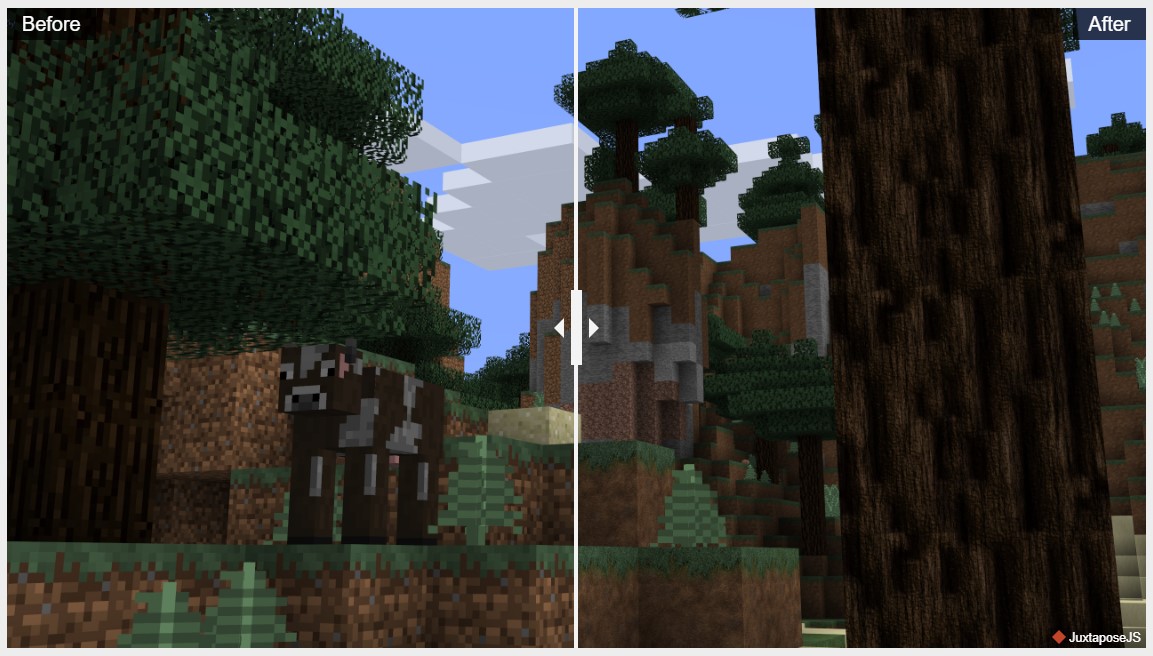 R3D Craft will BOOST your vanilla Minecraft into the extreme by giving it a makeover. This texture pack will increase the regular 16-bit resolution of the texture up to 512-bit, which is pretty crazy, considering that even at 32-bit or 64-bit, it’s already a good choice.

But then R3D Craft will have you experience gorgeous graphical glory of 512-bit resolution. One of the best things about this texture pack is that while the resolution is insanely higher than the vanilla, the textures are essentially the same, with little to no memory spikes in your GPU. 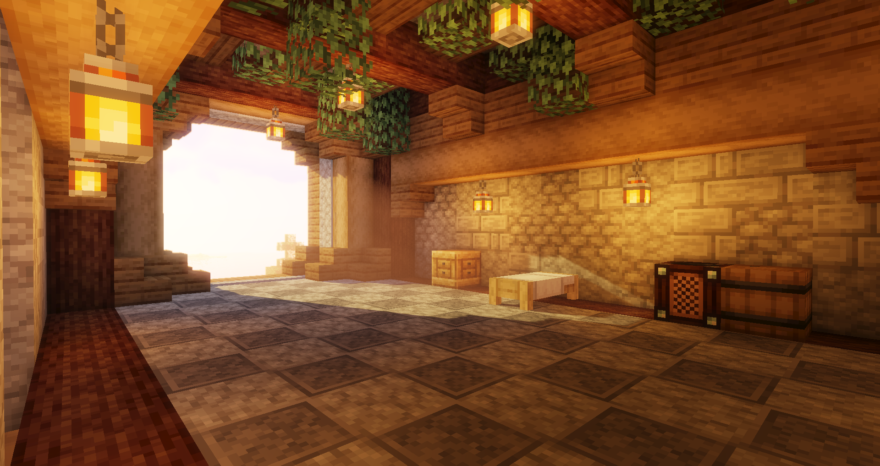 Jicklus is a pack that enhances a lot of features in the game but retaining the natural look of the vanilla version, except this time around, the details are more polished and vibrant.

When it comes to the outline and design of, say, the enchanting table, Jicklaus makes the game a bit more stylized with its own original design, which is an overall improvement of the game’s stagnant vanilla look. 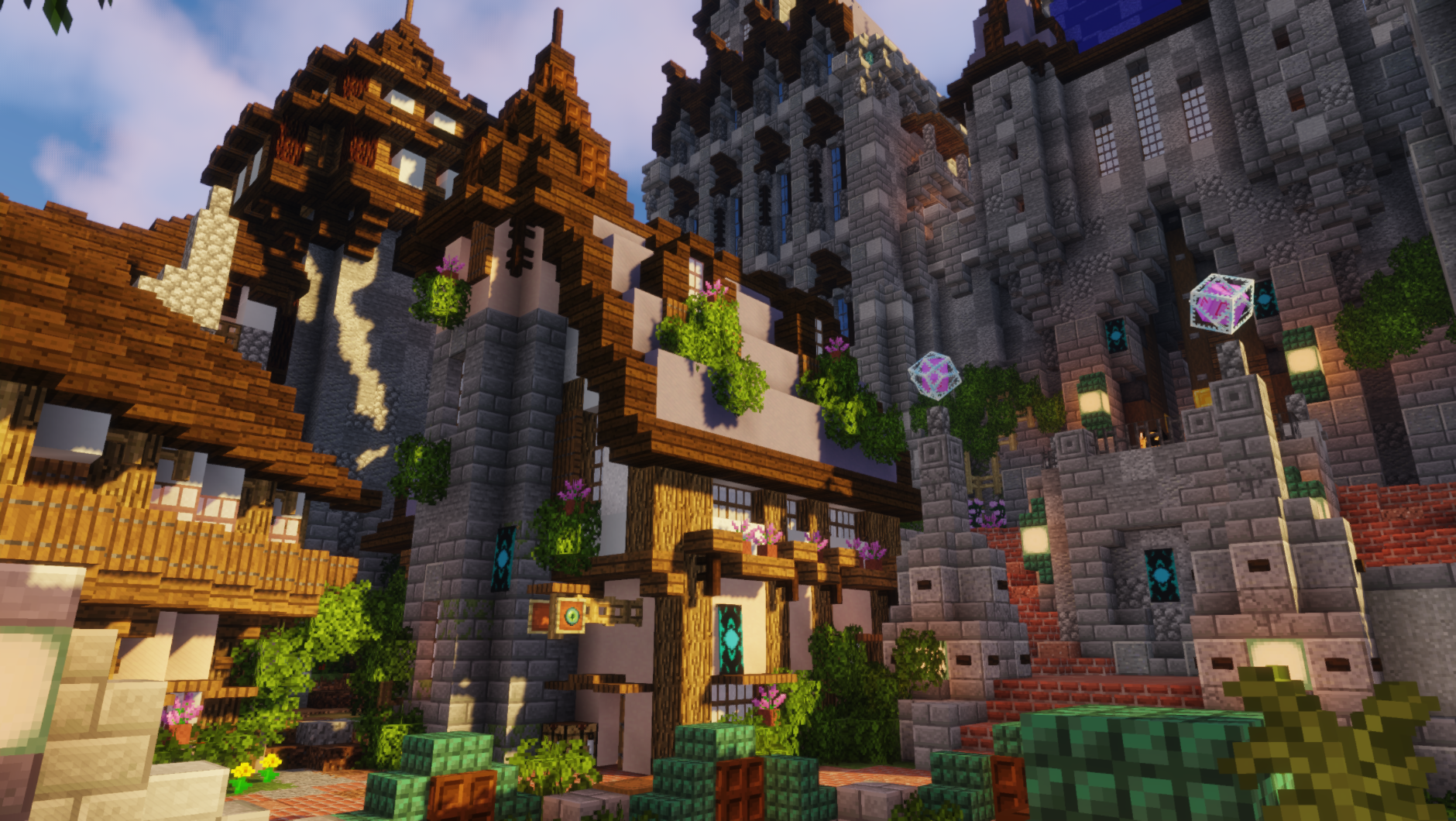 Although this mod acts like the Improved Default texture pack, BwW adds more into the game by allowing people to have improved skyboxes as well as better foliage for the tree leaves’ textures.

What’s good with this texture pack is the addition of better textures for the leaves is one of the reasons why it works well as a standalone, which makes the game a bit more mesmerizing in terms of ambiance.

Realistico is quite similar in terms of the texture visual updates to R3D Craft. What’s amazing with Realistico is when you combine it with shaders, you’ll get the most visually stunning results, provided that it wouldn’t toast your PC in the long run.

What’s more, Realistico offers photorealistic graphics, and I think it’s one of the highlights of this textures pack, aside from the parallax effect included in the texture pack, which works insanely well with other photorealistic shaders.

As amazing as it sounds, this texture pack isn’t free, as it’s gonna cost you around 3 dollars. But for all it’s worth, I think 3 dollars is pretty cheap. 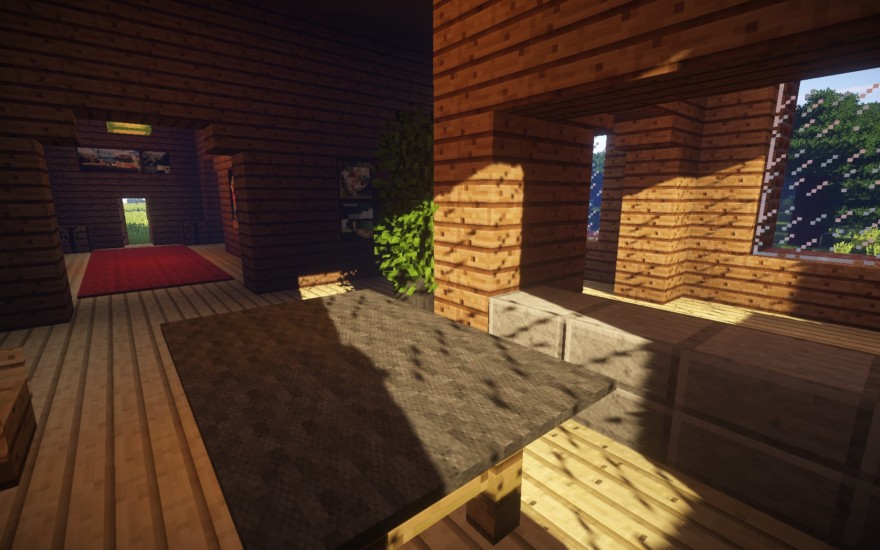 What’s more, this texture pack will actually interact with shaders without the lag spikes since it was optimized to work with several shaders in the game and interact with the texture’s surfaces. It works great with PBR or physically based rendering and raytracing, which works really great if you have an RTX-enabled GPUs.

Mes’easons is all about making your overall Minecraft experience unique and visually satisfying in all aspects as this texture pack adds more immersion into the game by having the four seasons cycling every period.

This texture pack works so well with many shaders for photorealistic design, especially with the RTX running on your PC.

What’s more, it’s pretty fun to experience seasons changing in every biome, which works so well with the game and adds a more atmospheric vibe while retaining the game’s ambiance. 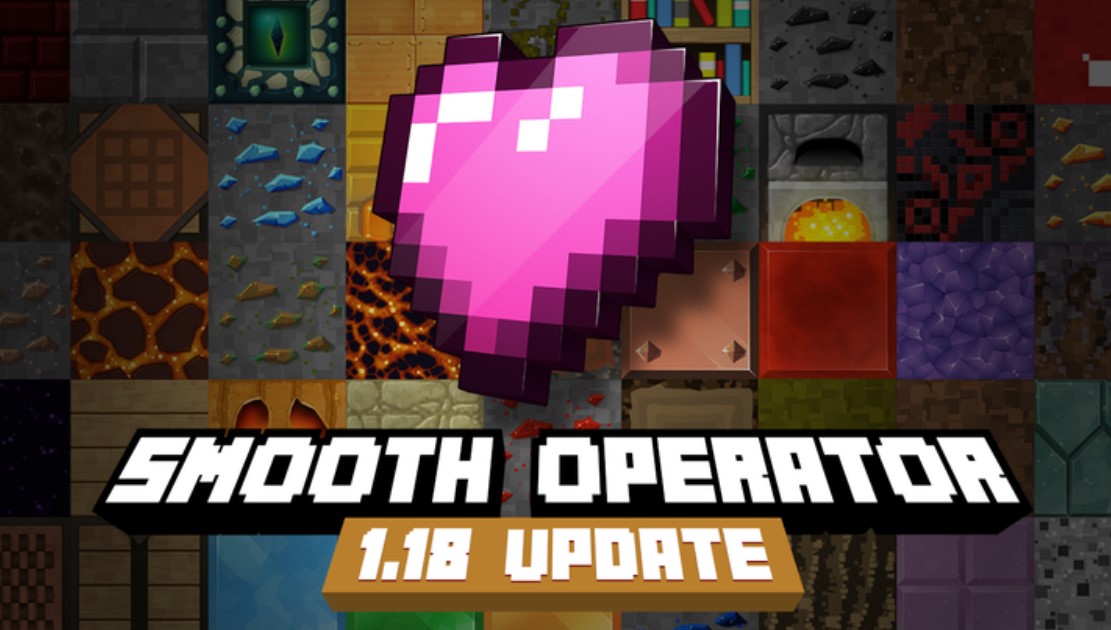 The Smooth Operator resource pack is essentially one of the smoothest packs we have here.

While this pack itself can be quite different in terms of graphics setting and texture models, the shape’s sizes and volume are still essentially the same. 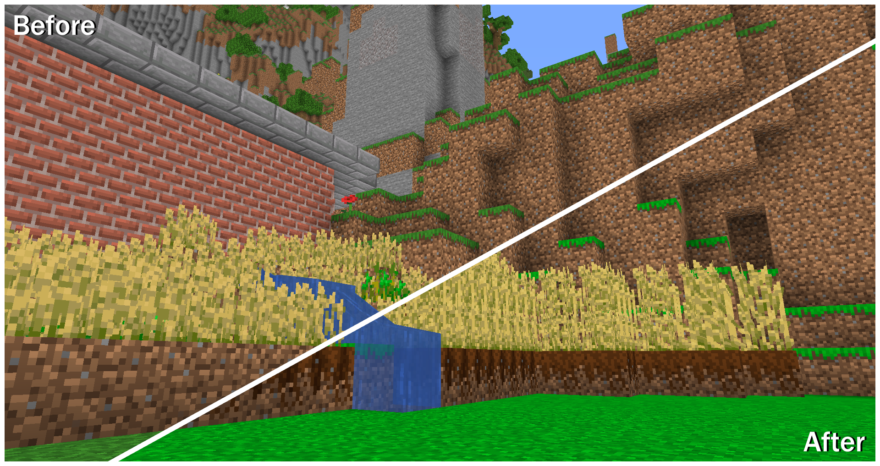 S16X works exactly like an enhancement to the standard vanilla textures by spicing the details with colors, as well as adding realism to the game’s models.

For example, some plant crops will grow by 2 blocks, just as high as it is in real life. Colors of certain blocks vary greatly, and you discern them by looking at their block design once you place them. For example, the mushroom’s original colors were virtually changed into the color of red and blue.

The grass and plant blocks’ colors are more vibrant here, but nothing too crazy as too saturated and all that. Like the dirt block with plants and crops, some of the blocks are more on par with its real counterpart.

Ultimate immersion is one of those highly polished texture packs that will probably torture your PC to death if you’re not running at least a GTX 1050.

One of the good things about this mod is that the game’s design is completely remade, and the textures are now smoother, hyperrealistic, and incredibly far from the 16-bit version where you can almost see every pixel individually. Using this mod, you’ll be able to build modern house designs and summon the inner architect in you. 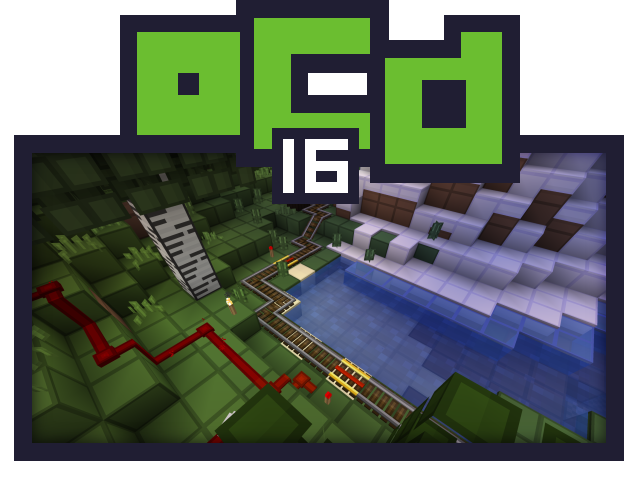 OCD Pack Vanilla is an overhaul to the game by making the game less complex as it is while retaining the general vibe of the game that it has on itself.

And while the designs are completely different from the vanilla version, the toll it has on your PC isn’t necessarily high as it can run on most devices with no real issue in lag or performance since this texture pack aims to stay true to its nature by keeping the simplicity of the game at its core. 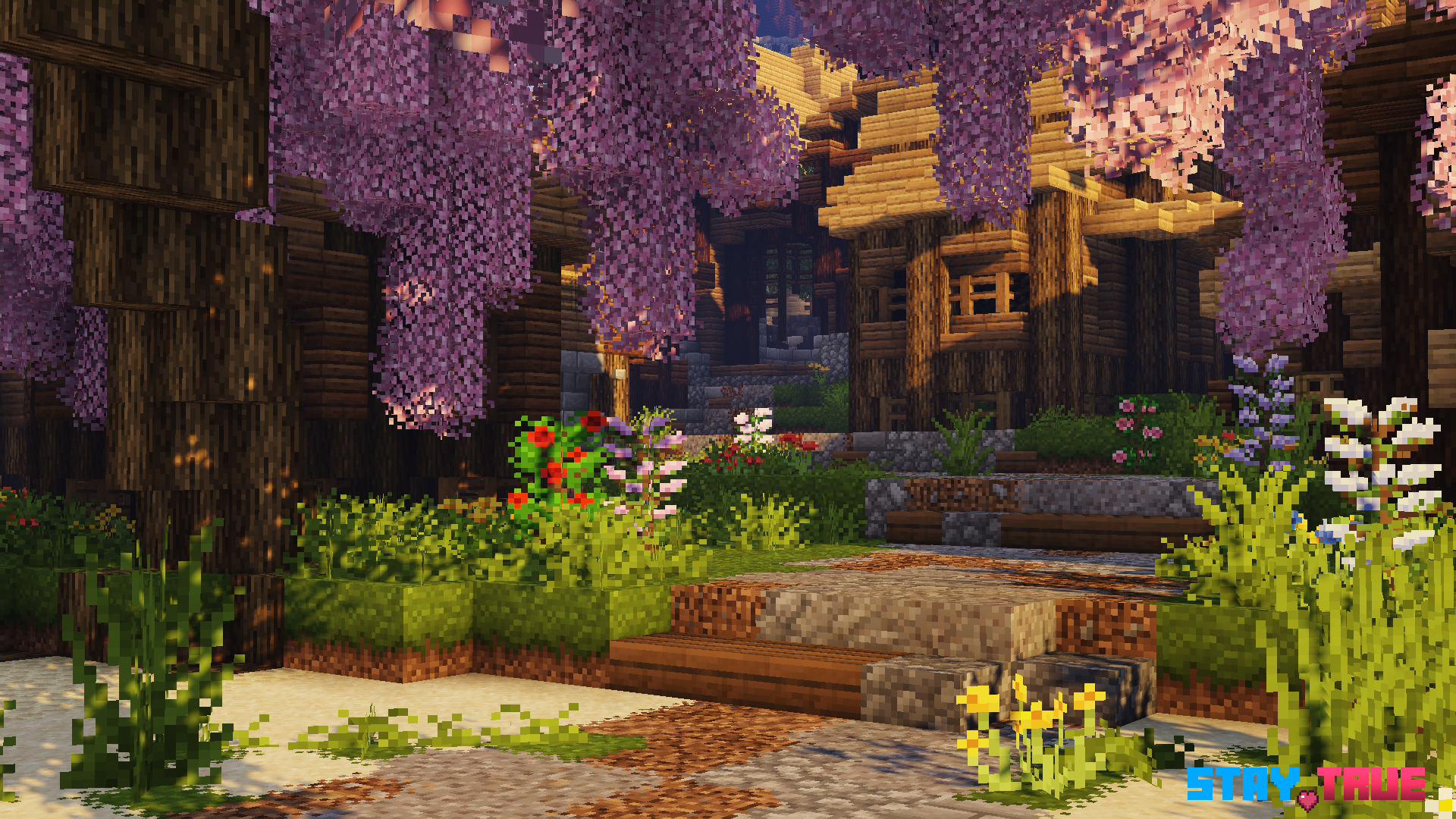 As obvious as its name, Stay True’s objective is to stay true to the original game design with a few tweaks to the design without making it look like it’s a different game.

One of the most realistic take on texture packs without breaking the game’s core rules for textures and models. The foliage varies more, making it a bit more original and less repetitive in the environment. 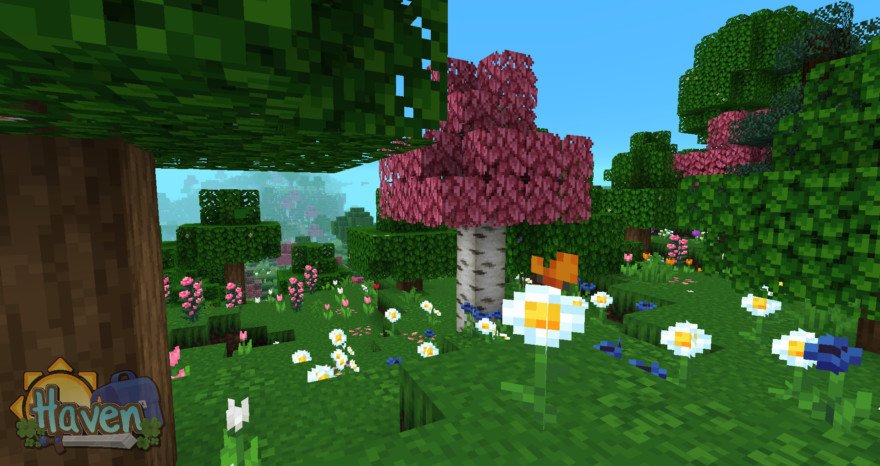 Haven’s art design is really something, considering this texture pack uses the same color scheme and palette as the original game, but instead, you’ll be able to experience a “more alive” version of the game without the feel more like it’s a completely different game from the rest of the texture packs.

It’s essentially like playing the game, the original game, as it is without straying too far from the general atmosphere by providing better color schemes and texture designs.

Meinekraft is a mix of realism and comical/cartoonish design. Blending with realistic textures, this pack brings a lot of details into the game by making the character designs a bit more close to reality.

Skeletons look like a necromancer has recently summoned them, the villagers look like orcs, but they share almost the same design with zombies. Kinda RPGish, but in a good way. 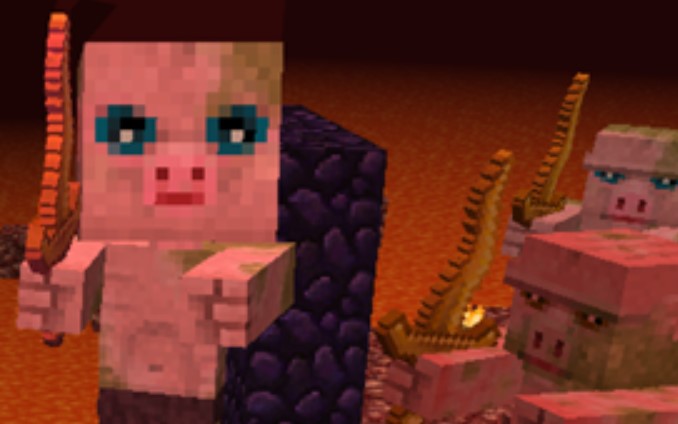 An upgrade to the regular 16-bit resolution vanilla, Lithos Core, is a 32-bit texture pack that offers a lot of subtle improvements into the game that you might miss. For example, Iron Giants have “hearts” as their core that’s fairly noticeable by the heart-shaped glowing thing inside their right chest.

There’s also more to notice in the new game design, especially the UI, which was highly polished and well designed in this texture pack. 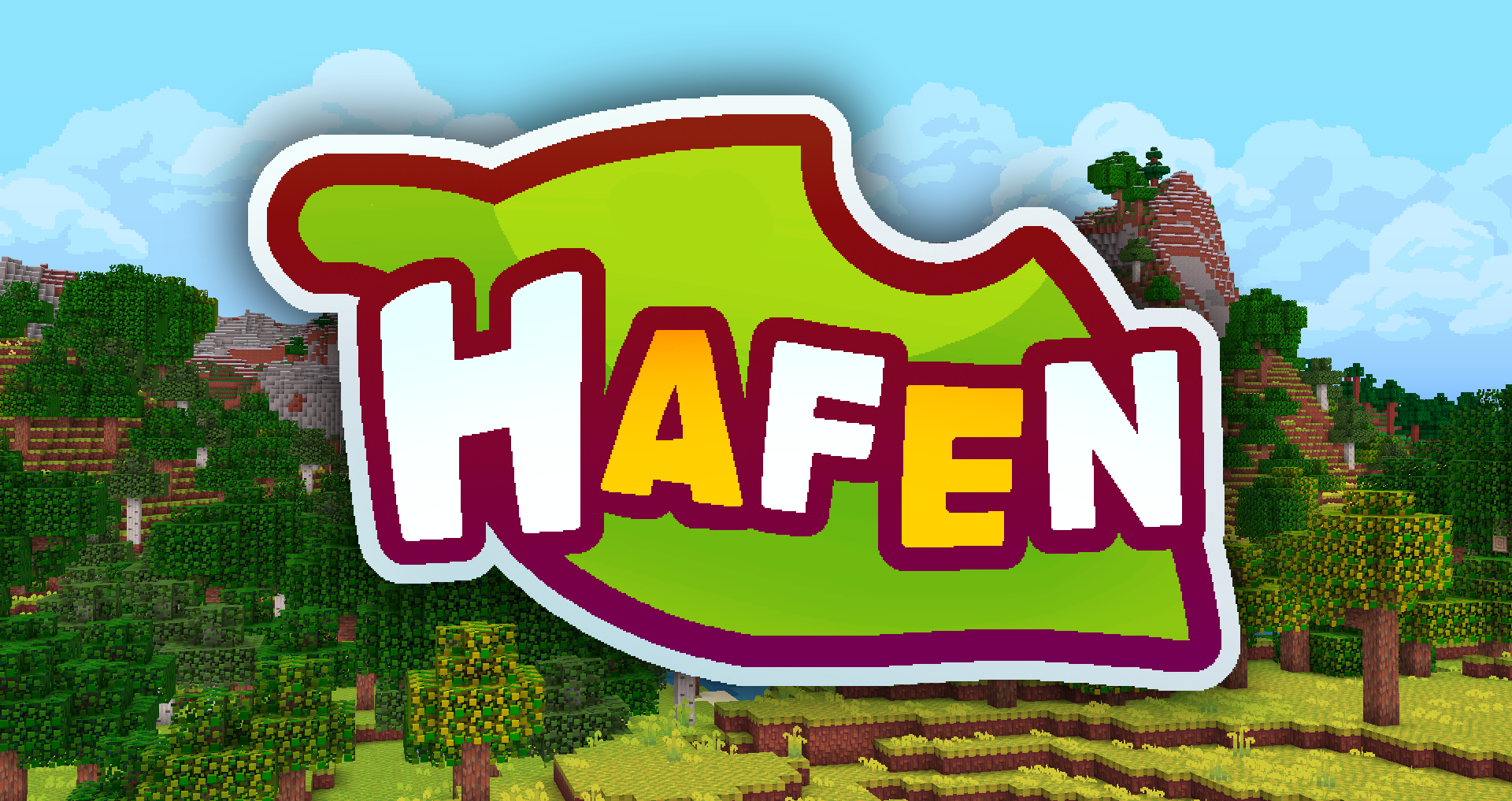 Hafen is a texture pack that adds more crisp into the game by having the game’s environment be more cartoony and rather simplistic, so the vibe of the game will still feel like Minecraft and not any other game.

The texture pack offers a colorful design for each of the game models that’s almost similar to playing any kind of RPGs in the past, which is its unique charm. 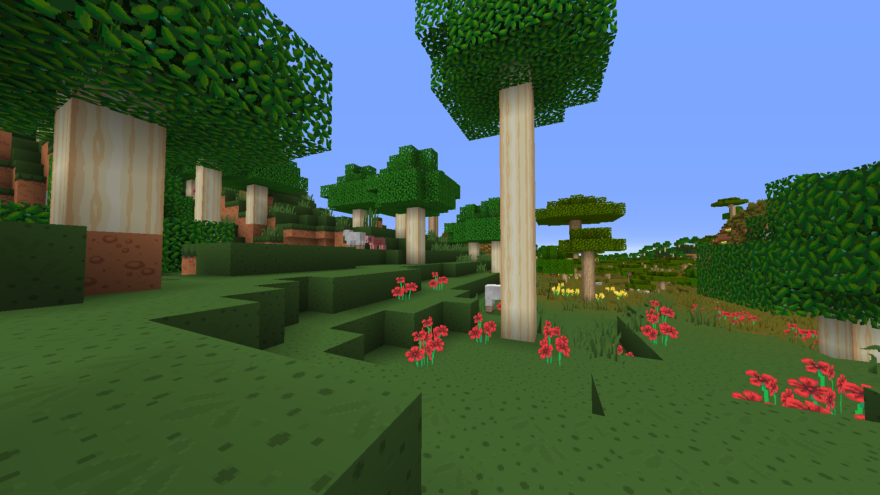 Dragon Dance is an RPG-styled texture pack that aims to bring, well, RPG ambiance into the game. Now, with Excederus’ touch, Dragon Dance rose anew as it was made possible for this texture pack to be compatible with the later releases of the game.

What makes this texture pack stand out is the amount of detail it has on the models, such as the plants and leaves having refined colors that have the vibe of Chrono Trigger, Fire Emblem, and Final Fantasy to it, which is one of the best things I’ve ever seen so far and it’s highly recommended to download this pack. 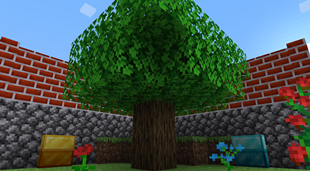 Now the game itself is a young child at this point, Nostalpha Pack aims to bring what most of us OG players felt when we first played the game.

Nostalpha Pack retains the same quality of the game’s design and color scheme back then, for example, the brighter color it has on the blocks and the lighter design on the leaves, being lighter or higher in contrast. Or the moss on mossy cobblestones being higher in saturation, resulting in a brighter color scheme.

One of this texture pack’s key features is the classic GUIs and the old sound design being reimplemented as part of the nostalgia.

For me, the best one to take out there is the Ultimate Immersion texture pack. It’s a really good texture pack and works best with a high-end PC, but I wouldn’t really recommend it. For most devices, I think what’s really best is the Nostalpha pack overall.

I’ve been playing Minecraft for 9 years now, so the Nostalpha pack really works well for me. Anyway, I hope you like this list. If you want to see more of our Minecraft shaders and texture packs, subscribe to our newsletter and visit the blog often.