The Monster Hunter series’s latest main entry presents players with an entirely new continent in which to hunt and kill ferocious and fantastic beasts.

And while the base game is a solidly crafted action RPG in its own right, the sizable fanbase naturally includes a decent number of modders who’ve taken it upon themselves to build upon or iron out the experience that it presents.

Below, we’ve listed twelve of our favorite user-made mods for Monster Hunter: World. 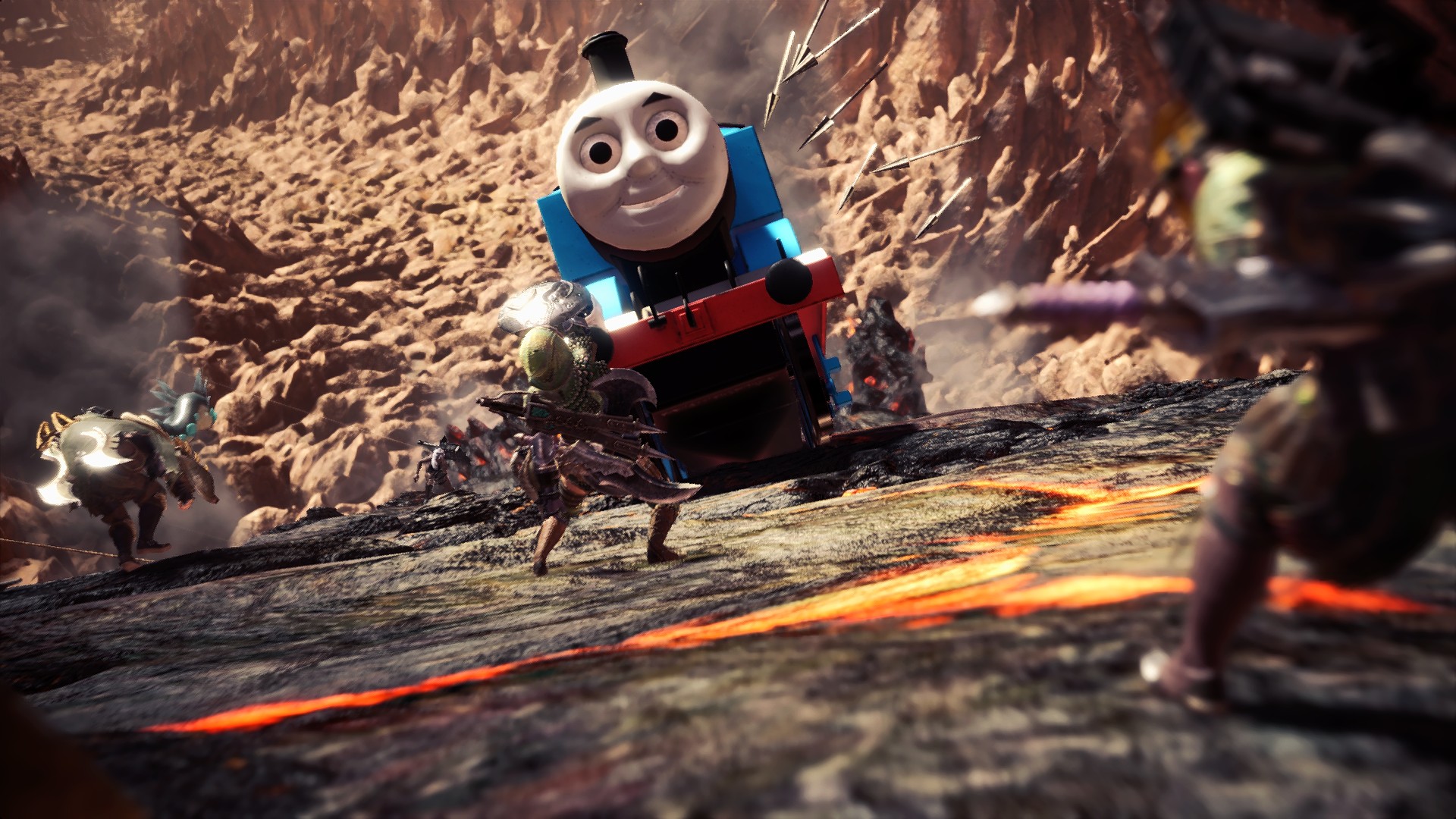 Really, now, can the modders of any popular triple-A game really say they’ve done their job properly until it’s made a mod like Thomas the Elder Dragon?

Following up on a proud tradition made popular by the Skyrimmodders, this mod replaces Elder Dragon Nergigante with Thomas the Tank Engine. 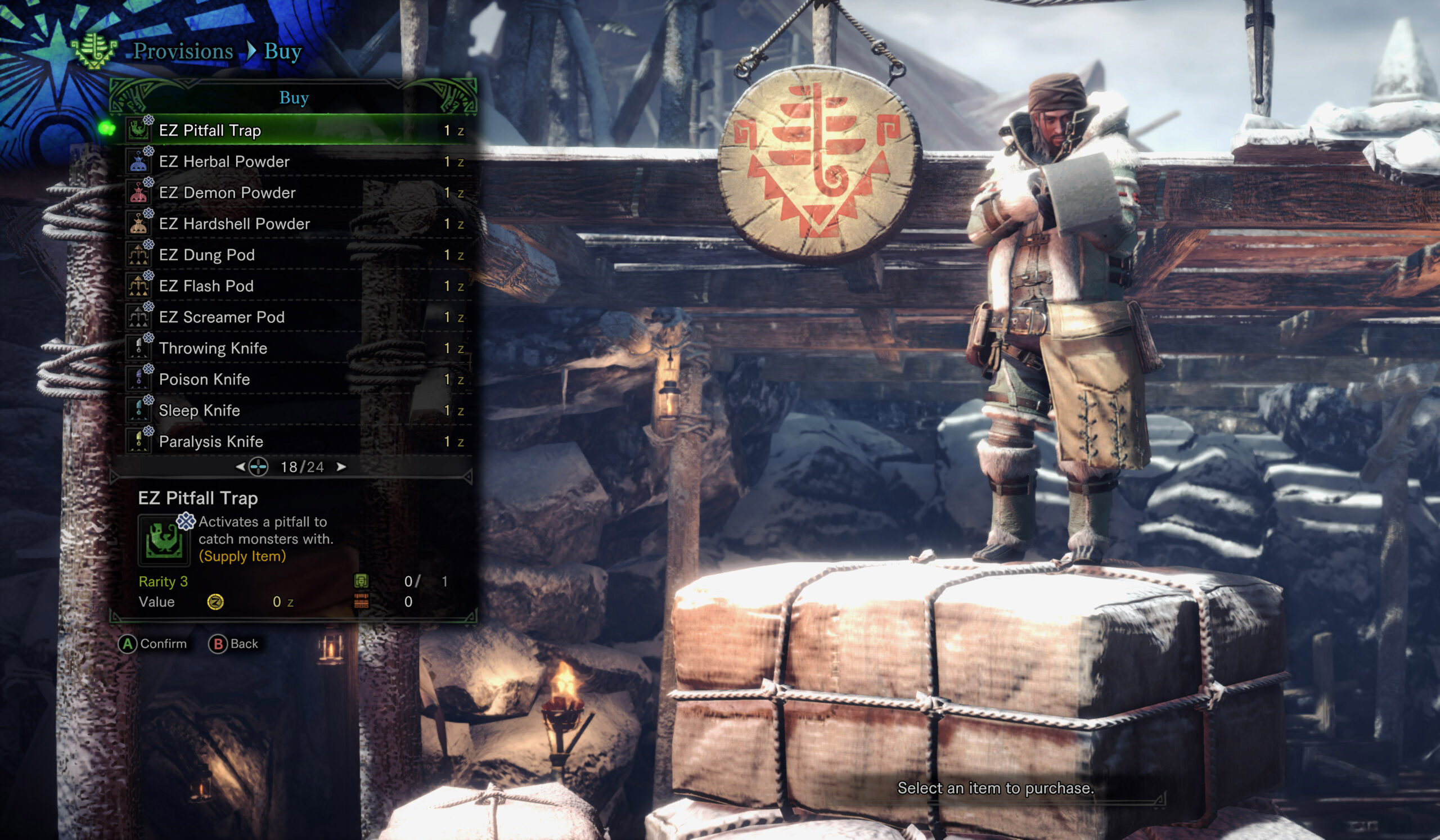 The All Items In Shop mod, as the name implies, makes all of the items in the game available for purchase in the shops.

Some players might argue that this is cheating (and, well, there is the possibility that it could get you banned if abused).

However, if used responsibly, this mod can simply be a useful tool, especially if, for some reason, you lose your progress or are forced to restart.

It can be very handy to have a shortcut to re-acquiring items that you have gotten comfortable with in such cases. 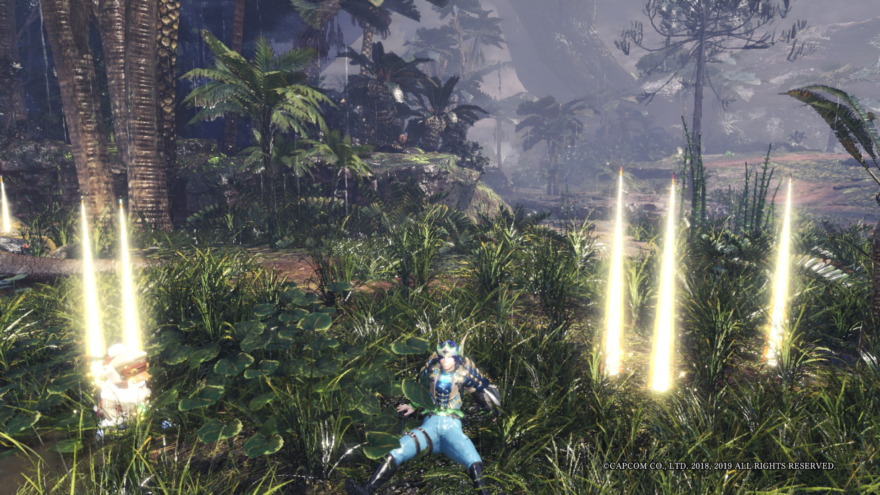 Like with any good RPG, part of the satisfaction of killing monsters in Monster Hunter: World comes with gathering up the dropped items afterward, hoping to find something rare.

However, the satisfaction can end up being somewhat stunted by the rather tedious process of tracking down every single item amidst the foliage.

The Souvenir’s Light Pillar mod, as the name implies, makes the simple tweak of demarcating dropped items with small light pillars. It’s a similar method to that used by many other RPGs over the years.

This simple change can drastically cut down the time you spend tracking down-dropped items, which adds up to make the whole game experience both more efficient and more fun. 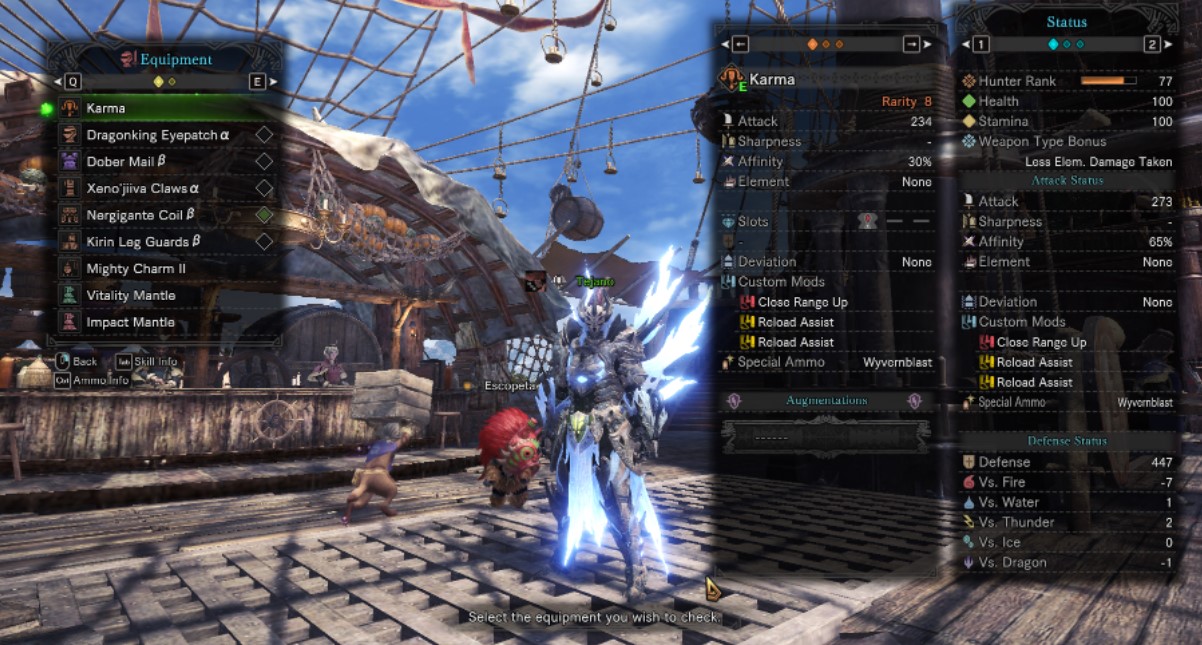 Monster Hunter: World isn’t just about battling beasts; it’s about looking slick while doing it. To that end, users have created the Transmog mod.

Should you happen to not be happy with the aesthetic that your current best set of armor provides, this mod allows you to quickly and easily change your armor’s appearance with that of any other available armor.

And unlike many other mods, this one is visible to other players, even if they don’t have it installed, meaning you can show off your carefully chosen new getup to them. It’s good to feel confident while swinging your sword or firing your gunlance.

Taking a different approach to helping players find monsters’ weaknesses, the Blood EFX mod does so via, well, their blood effects.

In brief, with this mod installed, it’s a lot easier to tell whether you’re hitting a monster’s weak spots. Their weak spots’ blood effects are more “soft” and “juicy,” while other areas are “hard” and “crunchy.”

It’s a very naturalistic way of familiarising yourself with the best way to attack a particular monster. 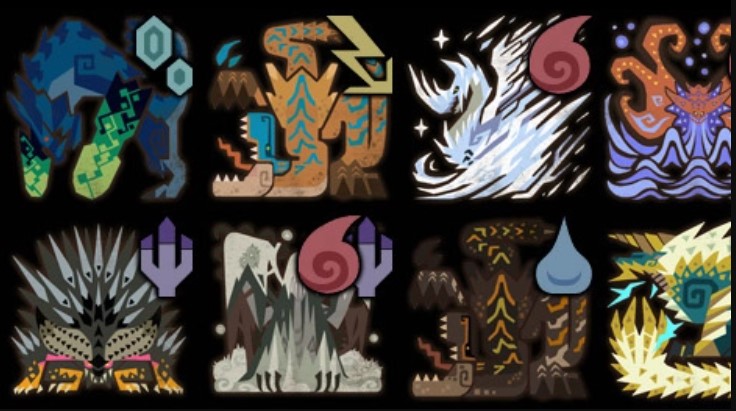 In a similar vein to the previous mod, the Monster Weakness Icon Indicator displays some extra info. In this case, it displays a monster’s weakness on its icon.

Even the most dedicated player can hardly be expected to memorize each monster’s various resistances and weaknesses, after all.

For new players, especially, this can be really helpful in getting a feel for the best approach to each fight. 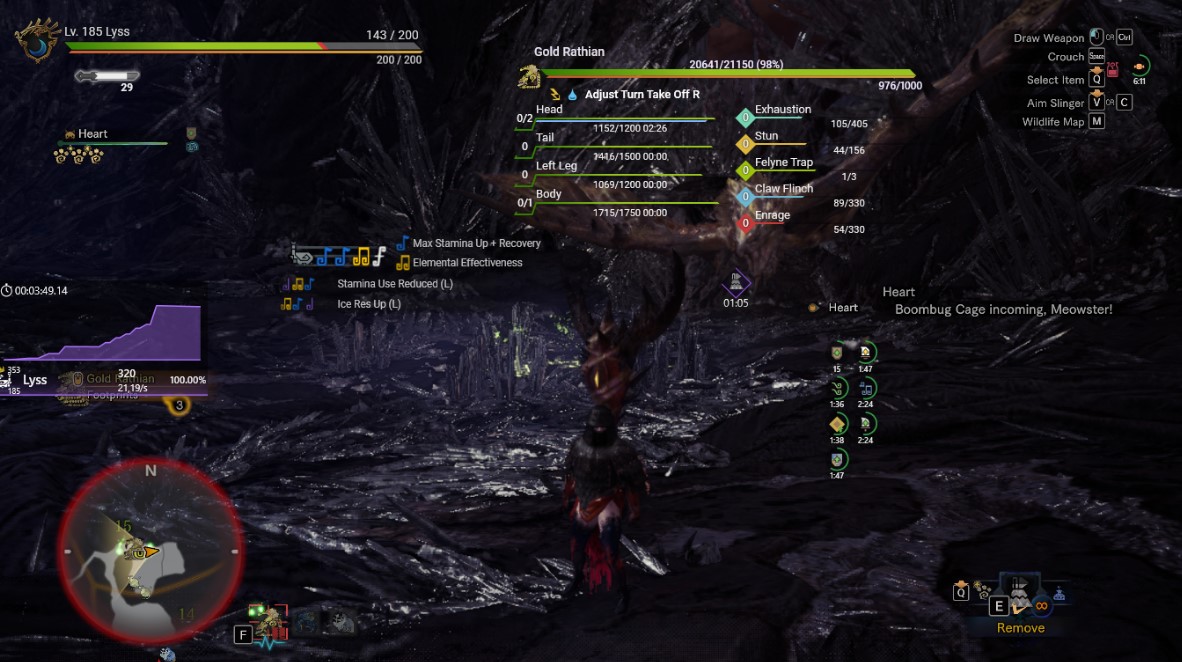 Games as big as this one tend to have sizable communities, and almost all game communities tend to coordinate themselves through Discord nowadays. It was an app made specifically for gamers, after all.

Basically, HunterPie is a mod designed for Monster Hunter: World players active in Discord communities. With this mod, players can more easily link their game to their Discord.

Its Discord Rich presence support allows you to easily show your progress in the game and what you’re currently hunting to your Discord friends. It’s fantastic for facilitating Monster Hunter-centric communities on the app. 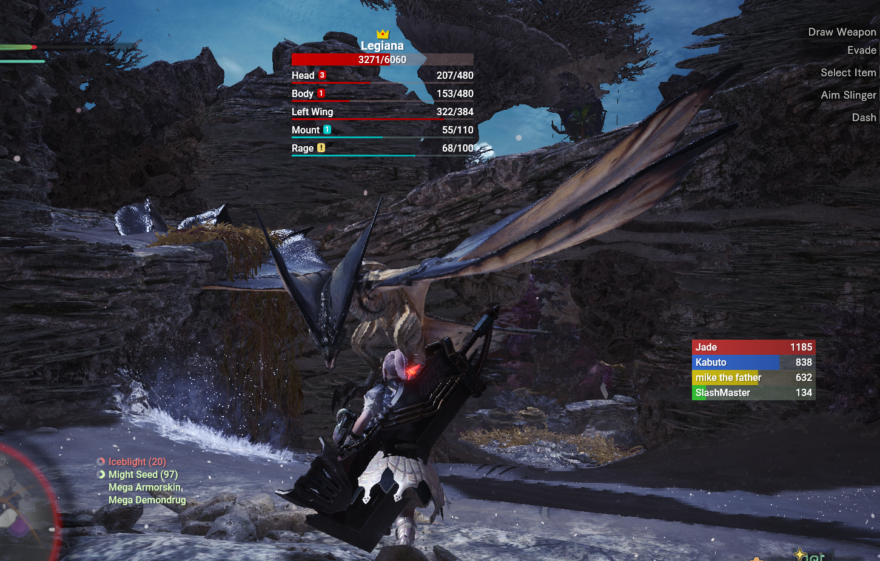 The SmartHunter mod adds a simple set of widgets that provide info that could well be life-saving in a particularly high-stakes hunt.

Most obviously, there’s a display that tells you the current health of the monster you’re facing and its damage to various parts of its body. This can be critical in helping you decide whether or not to keep fighting or flee.

Other displays include other critical info, such as buff duration, ailment thresholds, and so forth.

It’s overall a mod dedicated to providing the player with information that is tremendously useful and can potentially turn the tide of battle in the context of this gameplay. 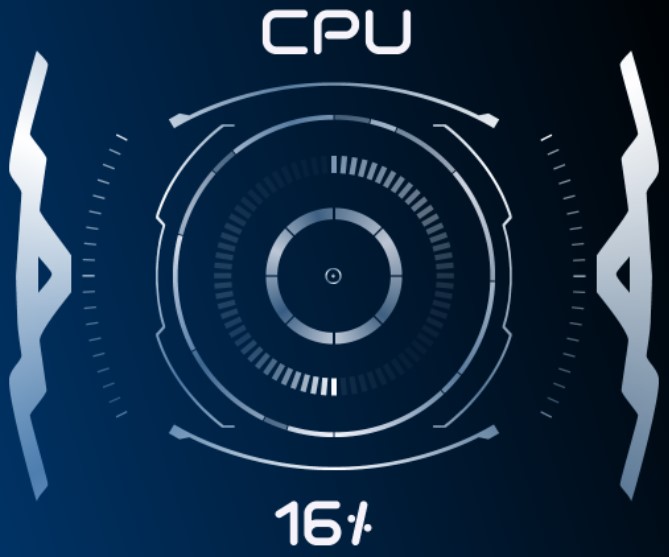 This is one of those mods that almost every triple-A game has – and if it doesn’t, it should.

Games are constantly getting more advanced, after all, and even advanced machines can sometimes have trouble running the latest ones with complete smoothness.

Anyway, the Performance Booster mod, as the name implies, endeavors to make Monster Hunter: World run smoother without affecting the game experience. It does this chiefly by trimming out pieces of unoptimized code that don’t impact the game itself.

In addition to this, it helps other game plugins to run a bit more effectively. It’s extremely helpful if you’ve ever found yourself frustrated by those framerate sputters that can really break the immersion of a dramatic battle, even if they’re mild.

Sure, you’re mostly here to slay the monsters, but you’re also visiting an almost completely unexplored continent. In between hacking away at the beasts, it’s nice to stop a bit and take in the landscapes of this new land you’re exploring.

The Clear Hunter mod sharpens up the New World a bit by polishing its visuals.

The bleaching effects of the engine are muted, and the textures are sharpened and given definition. Games like this are that much more thrilling when you’re truly immersed in the setting, and sharp visuals are a key part of proper immersion.

An especially popular mod, the NPC Gathering Hub, gathers a number of important NPCs, such as the Vendor Smithy, Botanist, and Tailrider Safari, into the game’s gathering hub.

This is tremendously convenient, as it means you can access all these NPCs in one spot without having to wander between them.

Just keep in mind, other players without this mod installed won’t see the NPCs, so it’ll look like you’re talking to yourself when you interact with them. 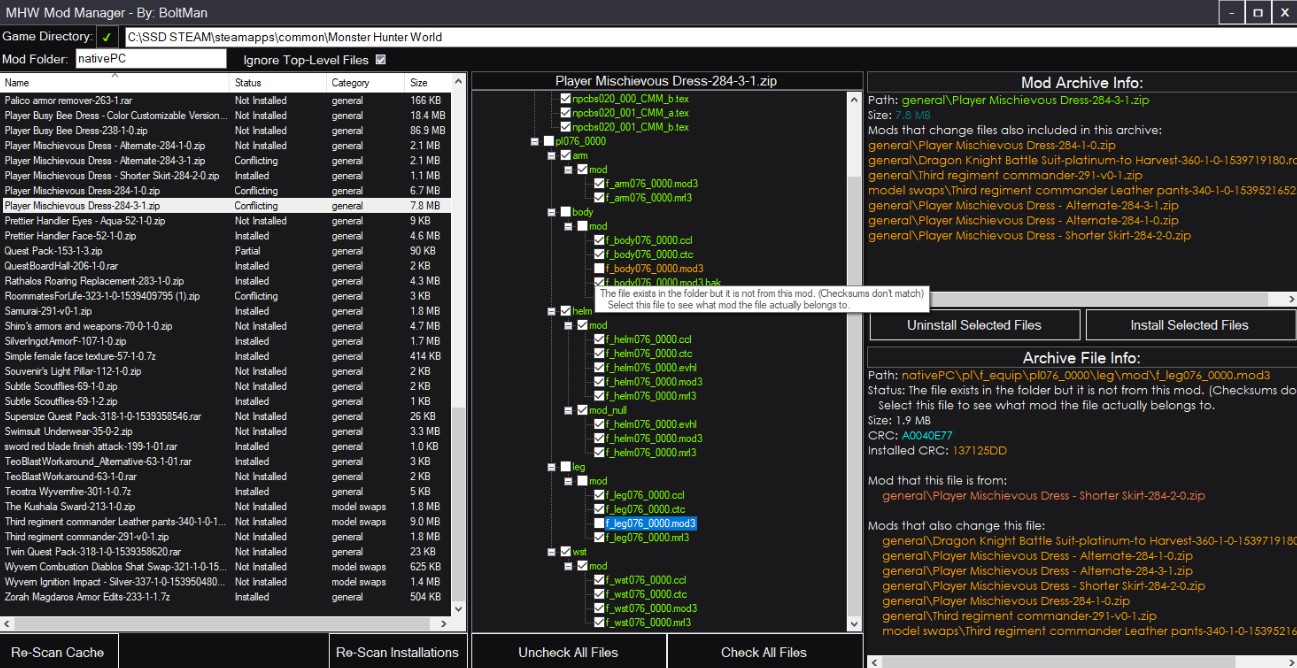 If you’re planning to heavily modify your Monster Hunter: World experience, you’ll probably need this at some point.

It’s one of those mods that shows up in almost any sizable modding community.

Basically, the Mod Manager helps you, uh, manage your mods. With it, you can easily keep track of all the mods you have installed, easily install and uninstall them, and examine which game files they alter.

It’s tremendously handy for the folks out there who like to thoroughly customize their gameplay.

[…] this with the fact that Monster Hunter World has brought a massive influx of new players to the scene, and it’s understandable that people are […]