Traditionally, many of us are familiar with eyepatches because of an accident we got into on the playground at school or another medical reason that left our younger selves with a blow to the ego.

But, in this day and age, eyepatches have picked up in fashion popularity! Instead of being a symbol of accident or injury, eyepatches have been incorporated into streetwear for a chic alternative accessory that both men and women use!

Creating a Sim with a fashion sense that’s a little out there can be difficult, but with simple items like an eyepatch to bring the look together, it’s not as complicated as it may be.

So, if you’re in the market to give your Sim an eyepatch of their own, regardless of the reasoning behind it, here are the 10 best Sims 4 eyepatch custom content. 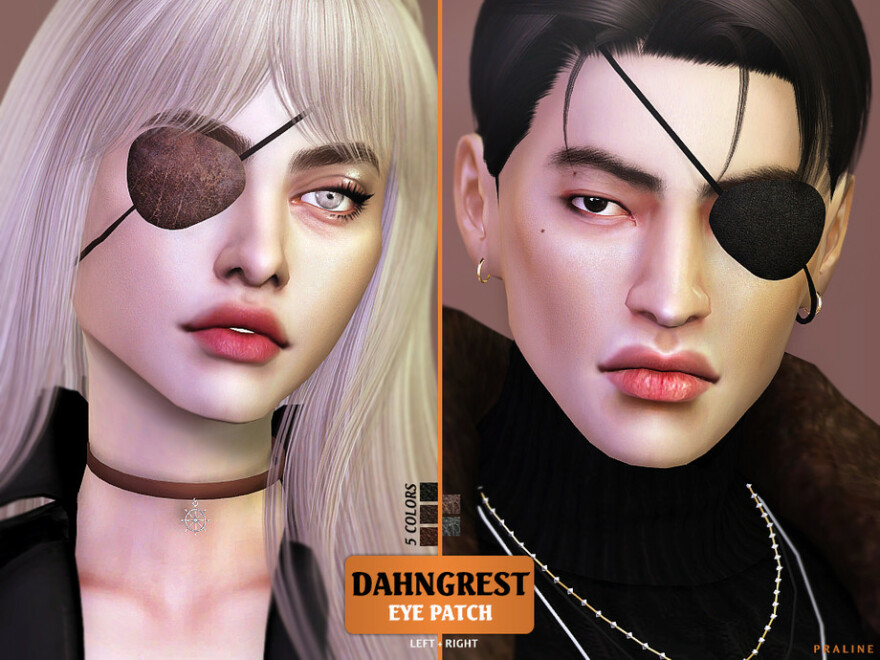 Let’s start things off basic with the Dahngrest Eyepatch. And don’t get it mixed it, basic doesn’t mean boring! But, sometimes, you don’t need an eyepatch with extravagant details and bright colors, you want something that’s simple, and you know will go with just about anything.

The beauty of this option is that the design is simple. It’s a single-colored eyepatch with one band wrapping around the eye to effectively do its job.

That means that it’s a good option for your Sims that may have just come from a trip to the hospital or for a Sim who’s trying out a new look. It’s available in 5 colors and can be worn on either the left or right eye. 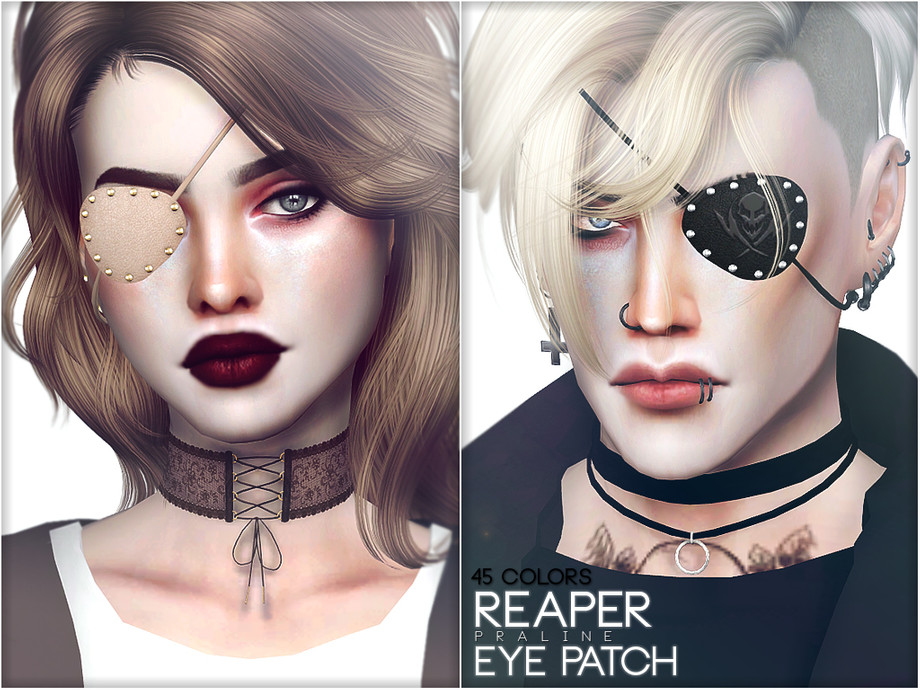 Along the same lines as the custom content above, the Reaper Eye Patch is another simple option that can be handy to have for a couple of reasons.

The first is that if the outfit you have created is already heavy on the intricate designs, you may not want to have an eyepatch that’s too outlandish.

It can quickly become busy and distracting, which may not be exactly what you’re going for.

But, on the other hand, this eyepatch does have some details on it. It comes with a laid-back studded design that goes along the edge of the patch, so it separates itself from being a piece of medical equipment and earns its title as a new-aged fashion accessory. 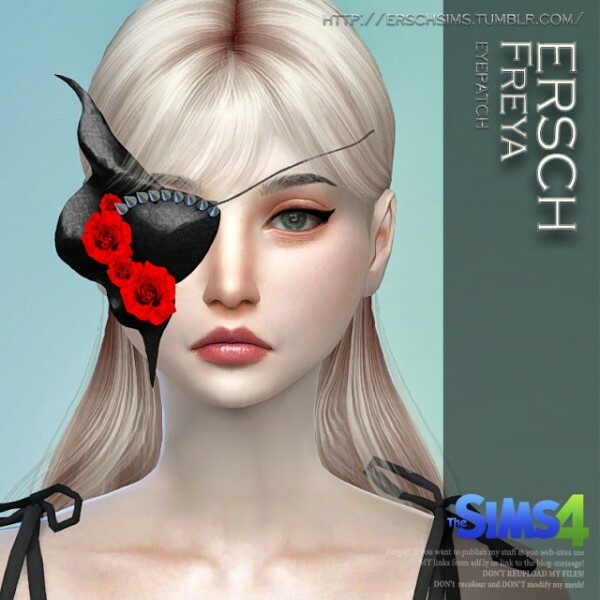 If you thought that all eyepatches were plain and black like you’ve seen in the pirate movies, then you were sorely mistaken.

Sure, some can look like that, but others like to use the art of design to spice up their look and make them stand out from the others on the market.

Items like the Freya Eyepatch are intricate, beautiful, and work well for just about any look!

Keeping the traditional black color that most eyepatches are seen as, there’s the addition of a rose, a small veil accessory, and even spikes on this eyepatch, making it truly one of a kind.

What this reminds me of most is the Phantom of the Opera, anyone else? Maybe it’s just me.

But paired with something like a dark red skirt and some sleek industrial boots, you’ve got yourself the outfit of a lifetime for your Sims.

Most of the eyepatches we’ve come to know and love are in a semi-circular fashion. Nothing too flashy, just a standard eyepatch. But, there are other designs to them out there that are just as good, if not better!

One way to find differences in eyepatches is with something like the Broken Eyes Eyepatch.

Instead of being round in some way, this is a simple square piece of cloth made to look like it’s for an injury- but is that what it’s actually being used for?

More often than not, in this day and age, these types of eye patches are used as accessories, especially for creepy costumes like a gory clown or even an undead nurse.

It’s perfect for Halloween or any other costume events your Sims have been invited to recently, but even for a gothic lolita-type style, these eyepatches can work just as well to tie an outfit together. 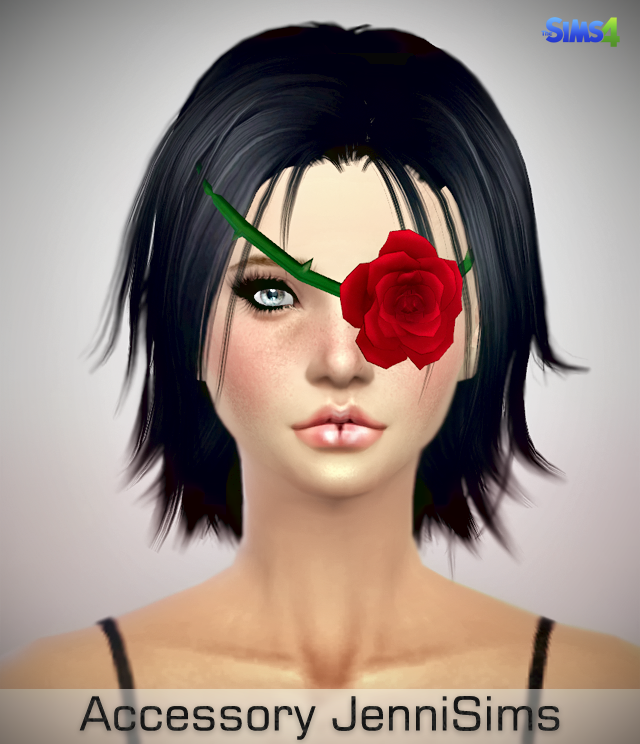 The design is, in the name, an eyepatch made to look like a blooming rose that covers up your Sims eyes.

This eyepatch comes in a classic red color and is made complete with a band that looks like a stem with thorns. Perfect for a spin on a Beauty and the Beast costume or anything else you may have in mind. 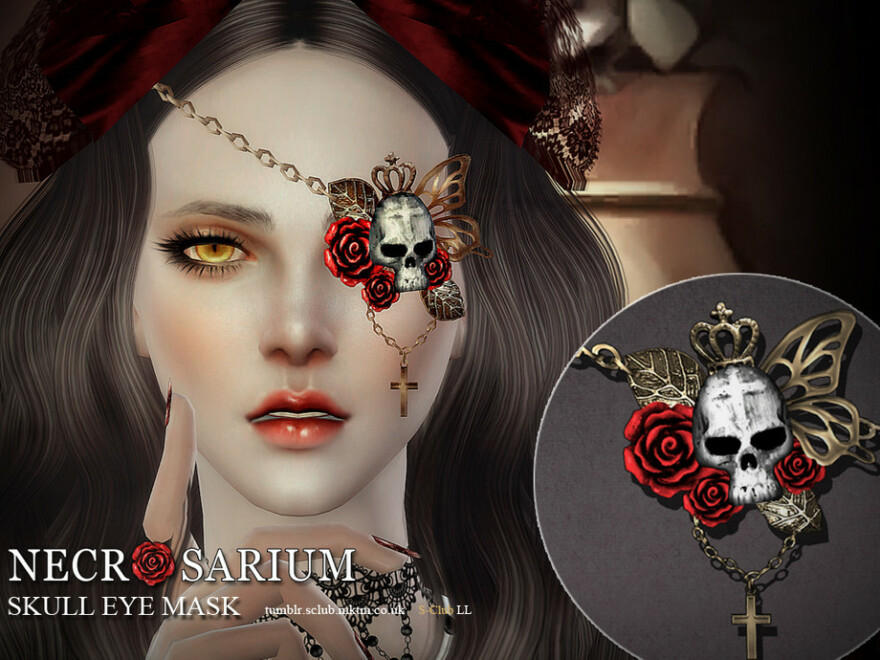 This eyepatch takes the concept to a whole new level. First of all, instead of an elastic-looking band, there’s a chain holding the whole accessory together.

The other very noticeable detail to this eyepatch is the fact that there really isn’t anything we can call a traditional “patch” on this piece.

It looks more like an intricate piece of jewelry, which is all the more reason to download it!

A skill, some wired detailing of butterfly wings and a rose, and a crown on top of the skull to seal the deal. If you were looking for something extraordinary for your Sims eyepatch, then look no further than the Skull Eye Mask. 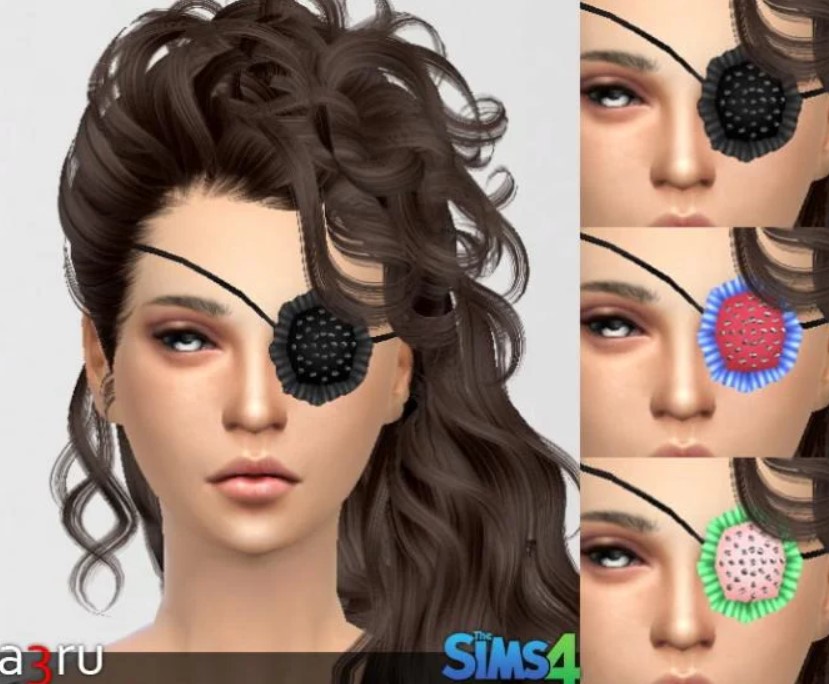 Similar to the rose eyepatch and the Reaper Eyepatch we’ve seen before, this eyepatch seems to be somewhat of a hybrid between the two.

While it’s not explicitly a flower eyepatch, the design certainly suggests some sort of flower inspiration with its design that looks like the seeded middle of a sunflower and the bushy petals that circle around it.

With that being said, this eyepatch isn’t too over the top, which may make it complicated to style with certain outfits. Instead, it’s casual, but it’s also fun, making the Studded Eyepatch the perfect accessory to add to your collection of custom content. 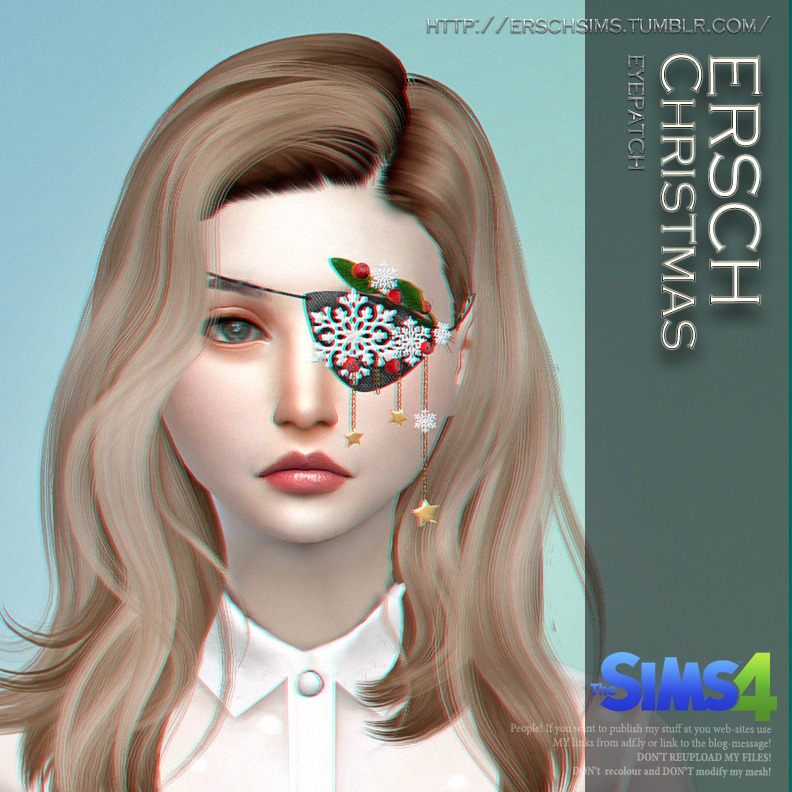 An eyepatch for every season and every holiday! Thanks to this piece of custom content, you can now style fun and festive outfit around your Sims Christmas Eyepatch.

Some of the main detailing highlights to this eyepatch include a snowflake design over the entire patch, as well as holly berries and a leave to go with it.

Another interesting thing to mention about this eyepatch is that there are stars dangling from the bottom of the patch. It’s beautiful, it’s intricate, and it’s festive, perfect for when your Sims get together to exchange gifts! 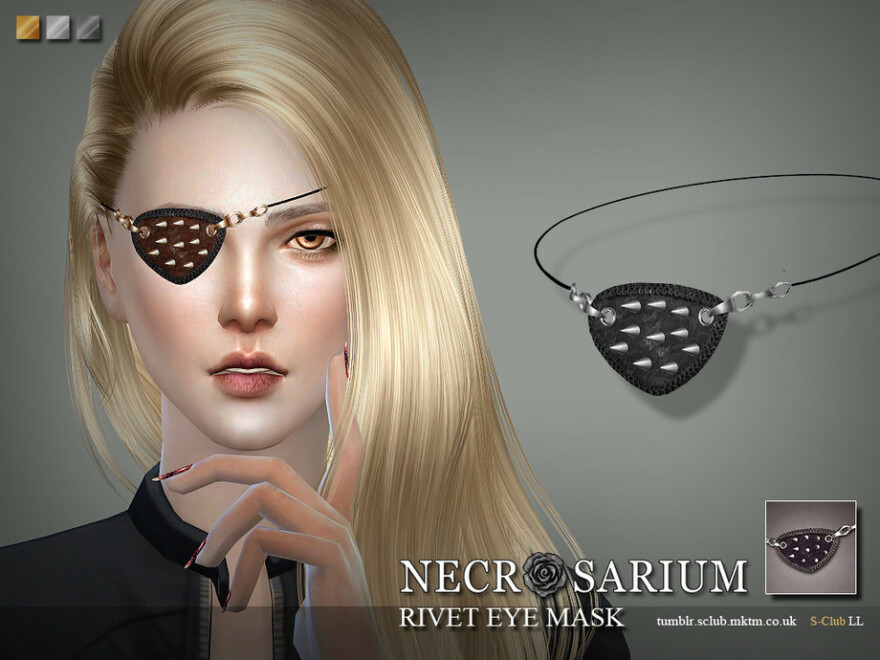 Sometimes, less is more, and that can definitely be said about an eyepatch like this. The Rivet Eyepatch is just like the title says, it’s an eyepatch whose main feature is that it’s a studded accessory to go over your Sims eye.

Studded accessories are an easy yet effective way to give your Sims outfit a little bit of edge. They’re also subtle enough to go with any outfit you can think of and use time and time again.

And to end our discussion on eyepatches, we have the Yuko Eyepatch with a dark color scheme and a heart-shaped design to use for whatever you may need it for.

Simply called eyepatch because it’s one of the simplest on the market, it can be used for any Sim, any occasion, whether it’s a Halloween party, an interesting idea you’re conceptualizing, or anything in between.

Contrary to popular belief, eye patches are versatile and can be made unique depending on what you decide to do with them, so have fun!

The Sims is meant to be your world to experiment, and you can easily do that by adding an eyepatch to your Sims wardrobe.