There are many archetypes of Monster card in the Yu-Gi-Oh! Trading Card Game, but Spirit is not one of them. Though Spirit is a type of card available, and one that you can duel with in tournaments, it does not have its own archetype group.

This is a shame because Spirit Monsters in Yu-Gi-Oh! are super powerful and amazing when used correctly. To help you find the best one to include in your deck, we’ve listed our top 10 Spirit Monsters for the game.

Though this card may not seem like much, it can be devastating for an opponent that relies on Spell cards or Trap cards to give them an edge while they’re dueling. Fenghuang has a low attack point count for a Monster card at level six, but the effect more than makes up for the lack of destructive power.

When Normal Summoned, you can use Fenghuang to destroy all of the Spell and Trap cards that your opponent controls. This only works for set Spells and Traps, but there won’t be any nasty surprises lurking in wait for you when you get around to attacking them.

Rasetsu works best if you have other Spirit Monster cards in your hand, or you know you have a fair few waiting for you in your deck. When Normal Summoned or Flipped face-up by you or your opponent, you can return this card to your hand once your End Phase is complete.

That seems rather lackluster by itself until you take the rest of Rasetsu’s effect into account. You can reveal one other Spirit Monster card in your hand and return one of your opponent’s face-up Monster cards to their hand. A neat trick if you’re feeling overwhelmed. 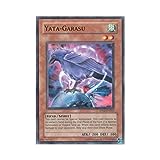 If you’re looking to bug your opponent or just outright frustrate them, then Yata-Garasu is the card for you. When this card inflicts any kind of Battle damage to your opponent, they must skip their next draw.

Imagine doing this turn after turn! Which is entirely possible because this card returns to your hand during your End Phase. Meaning you can play it again the turn after, as long as you can attack with it. This card is best used in conjunction with other Monster cards or Spells/Traps that can assist it.

For a card that can assist you in your main strategy, add a couple of Nikitama Monster cards to your deck. Nikitama is returned to your hand during your End Phase – a common ability among Spirit cards.

During the turn that this card is summoned, you can Normal Summon an additional Spirit Monster card. When Nikitama is sent to the Graveyard, you can draw one card. You must control a Spirit card to activate this effect, so always make sure you have at least one on your field.

This Spirit card is the perfect one to add to your arsenal. Once again, it can be withdrawn to your hand during your End Phase, but while it’s out on the field after being Flipped or Summoned, you can destroy all other monsters that are out.

To utilize this card, remember not to leave yourself defenseless. Dark Dust Spirit will take out your monsters as well as your opponent’s monsters. Have some Spell or Trap cards ready to use or keep a monster in face-down position to avoid Dark Dust Spirit’s effect.

With a solid defense of 3100 points, Yamata Dragon won’t be getting taken down any time soon. This Spirit card has similar stats to our dear Blue-Eyes White Dragon, and as a level seven Monster card, it has a lot of power.

When you inflict Battle Damage with Yamata Dragon, you have to draw cards from your deck until you have five cards in your hand. Of course, if you already have four or five cards, the effect may seem a little pointless, so gear your deck towards fast plays and hard hits.

Hino-Kagu-Tsuchi has a bit of a higher attack rate than Yamata Dragon, but slightly less defense. But stats aren’t all that matter in the game of Yu-Gi-Oh! and any opponent that decides to face you while you have this in your deck may soon regret their choices.

Hino-Kagu-Tsuchi forces your opponent to completely discard their current hard whenever you land a hit using them. Talk about putting your opponent in a sticky situation.

This card is another good staple for a Spirit deck and works well alongside other cards. If Yamato-No-Kami manages to destroy one of your opponent’s Monster cards during the Battle Phase, then you can also destroy one Spell card or Trap card that your opponent currently controls.

Once your End Phase comes around, this card is then returned to your hand. The major difference here is that this card cannot be Normal Summoned. You must Special Summon Yamato-No-Kami by removing a Spirit Monster card from play (from your Graveyard, not your field or hand).

Pendulum and Spirit type cards are rare in the Trading Card Game, but Yoko-Zuna Sumo Spirit offers a nice one on the Pendulum scale to balance out whichever higher Pendulum Monster card you may choose.

When Summoned, Yoko-Zuna Sumo Spirit allows you to send all of the Monster cards on your opponent’s side of the field to the Graveyard, as long as they’re in the same columns as your own Pendulum scales. This means you have the potential to remove one or two monsters from the current play field.